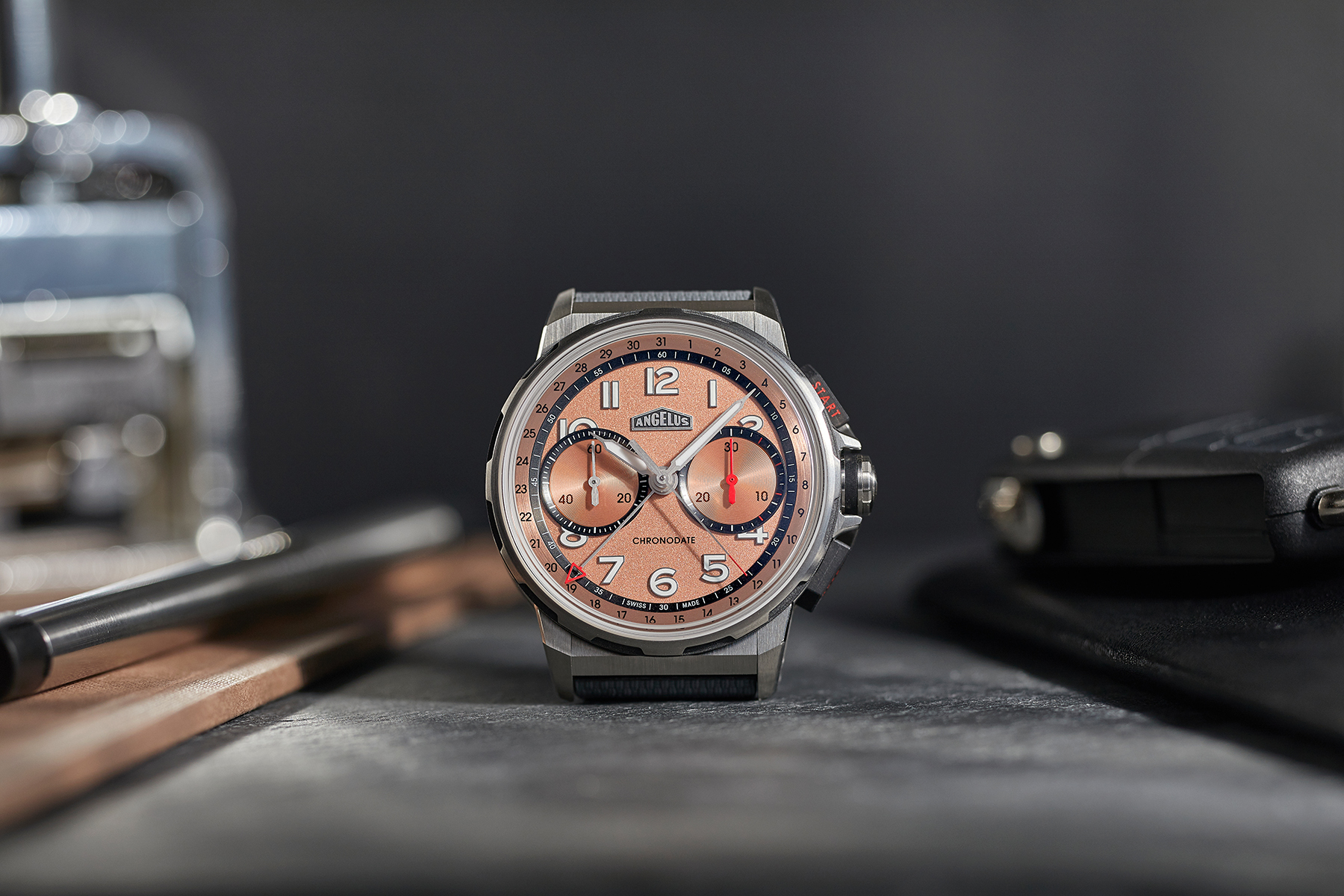 Here in the 2020s, we’re used to seeing outlandishly complicated watches, but travel back through time just 80 years, and even a chronograph was a novelty. In an age of utilitarian time-only watches, buying a chronograph was akin to upgrading your flip phone to a smartphone. Instead of having to use a separate stopwatch for timing races or calculating speeds, you could do it all with a push of a button on your watch. But, of course, that was just the start. When Patek Philippe produced the first perpetual calendar chronograph in 1941, it was a novelty in every sense of the word — with the minuscule numbers and price tag to match. Thus, what Angelus was able to accomplish just one year later was all the more staggering: It introduced the world to the Chronodate, the world’s first triple-calendar chronograph available to the masses. In collaboration with Revolution, Angelus presents a modern interpretation of this groundbreaking watch in a sumptuous rose-hued salmon dial. 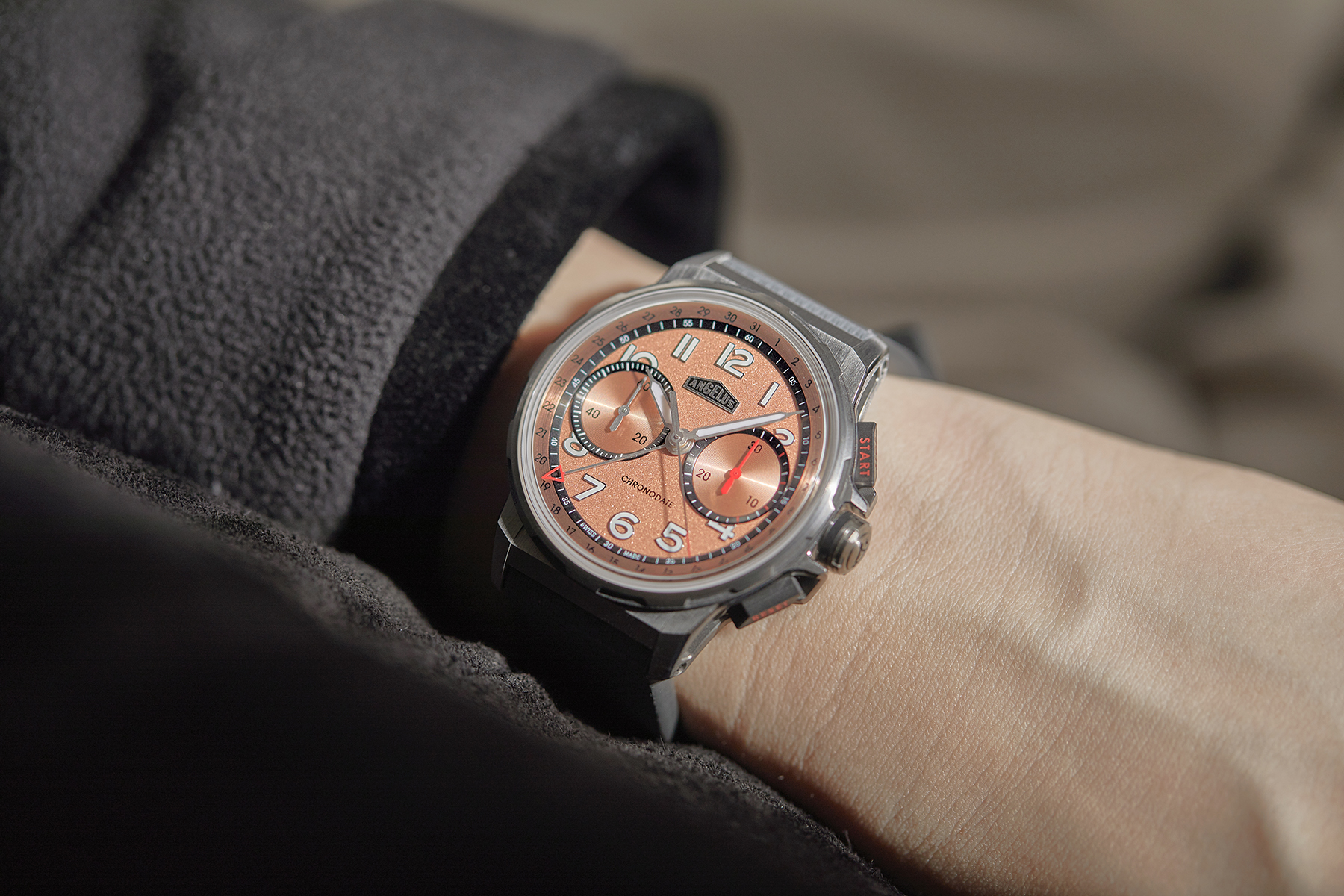 The original Chronodate (renamed the Chronodato in 1943) was an outlier for its time, not just in terms of complication, but also in terms of size. At 38m in diameter, the Chronodate was a massive watch for its time. Equipped with the in-house Angelus caliber 217 column-wheel chronograph movement, the watch featured dual registers with running seconds at 9 o’clock and a 45-minute chrono counter at 3 o’clock. What made the Chronodate truly stand out, however, was the addition of a pointer date complication with a red-tipped central date hand, a month window at 12 o’clock, and a day window above 5 o’clock. Coupled with large, luminous Arabic markers, the Chronodate was a true gentleman’s sports watch. 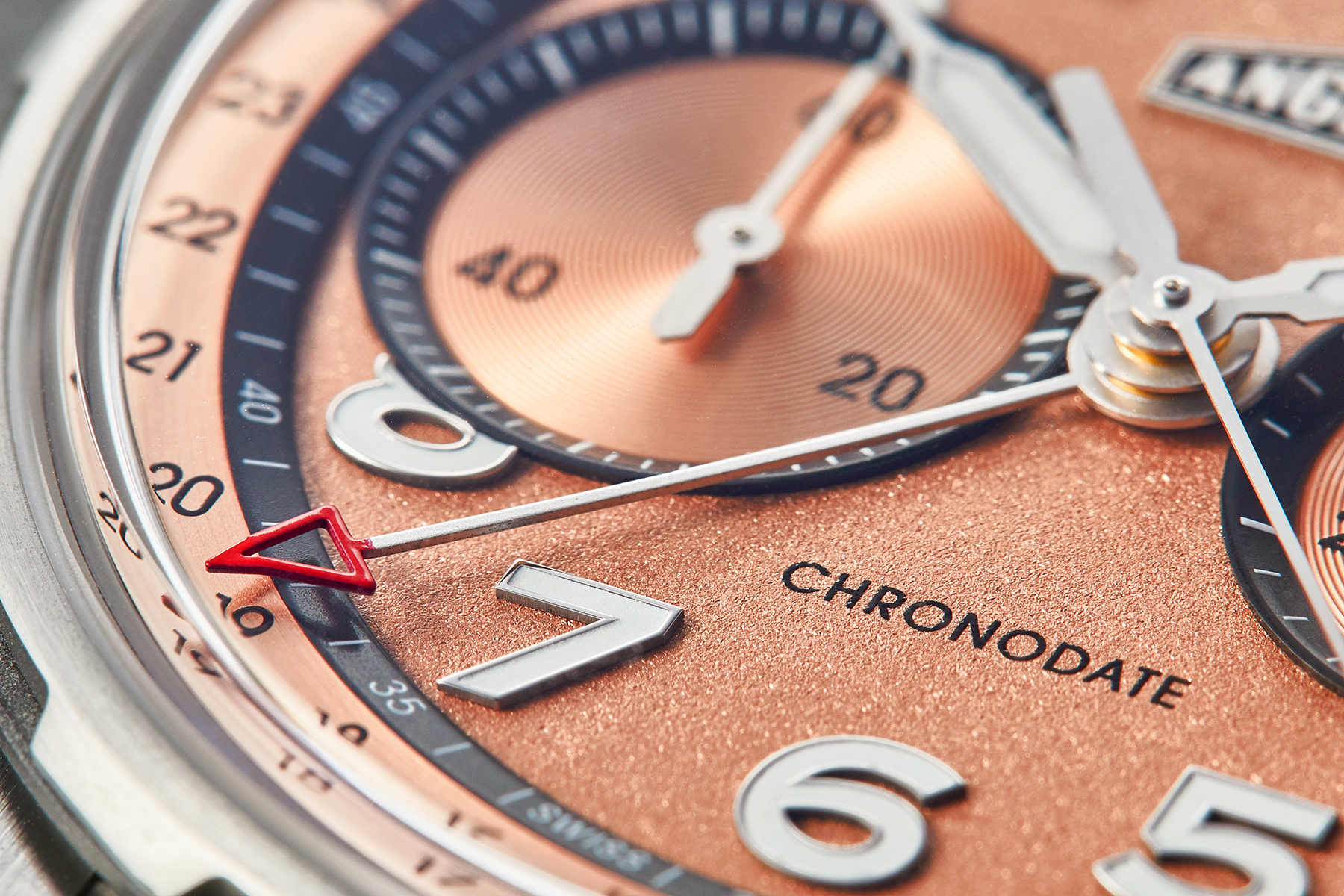 Originally established in Le Locle, Switzerland in 1891 and now located just a stone’s throw down the road in Chaux-de-Fonds, Angelus has plenty of horological firsts to its name outside of the Chronodate. Angelus was built on innovation, introducing watches such as the Datealarm, the first wristwatch to feature both an alarm and date function, as well as the Tinkler, the first automatic repeater wristwatch. In returning the Chronodate to the brand’s lineup, Angelus could have easily faithfully recreated this icon from its lineup, but the company is nothing if not modern and forward-thinking. The key to bringing back the Chronodate was respecting the storied history of the watch while bringing it fully into the 2020s with Angelus’s modern design language. 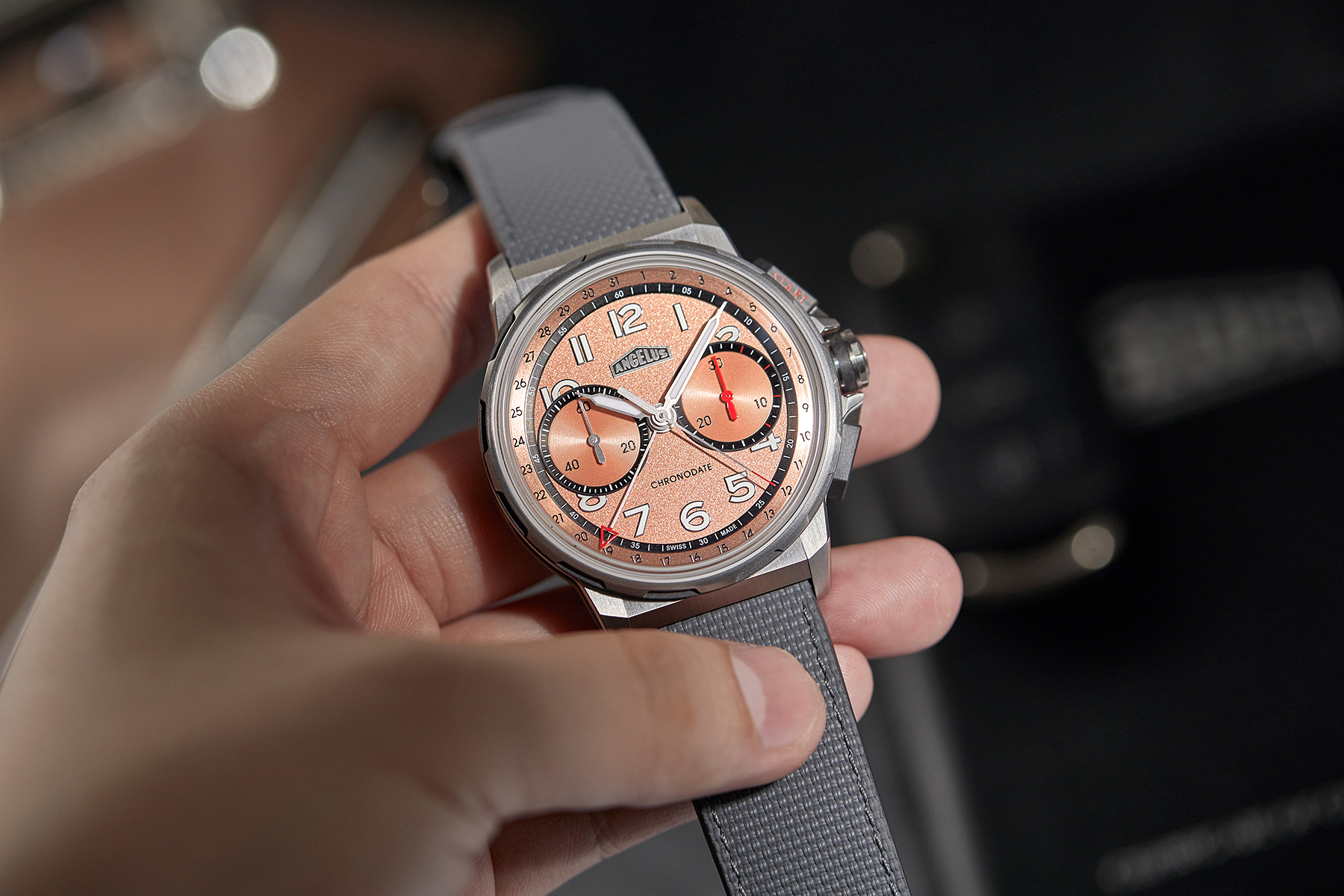 As Angelus’ President Bertrand Savary describes it, “This is the first version of the Chronodate. We wanted to create something with a very strong and distinct identity that was immediately appealing and that was crafted at the highest level we could offer. We wanted to have a watch that took some visual cues like the central date pointer and the oversized ‘Big Eye’ counters with the three-minute hash marks for old coin-operated telephones, combined with modern elements like our multi-part carbon and skeletonized titanium case. The result, we believe, is a really powerful new design that is the beginning of a family of watches for Angelus.” 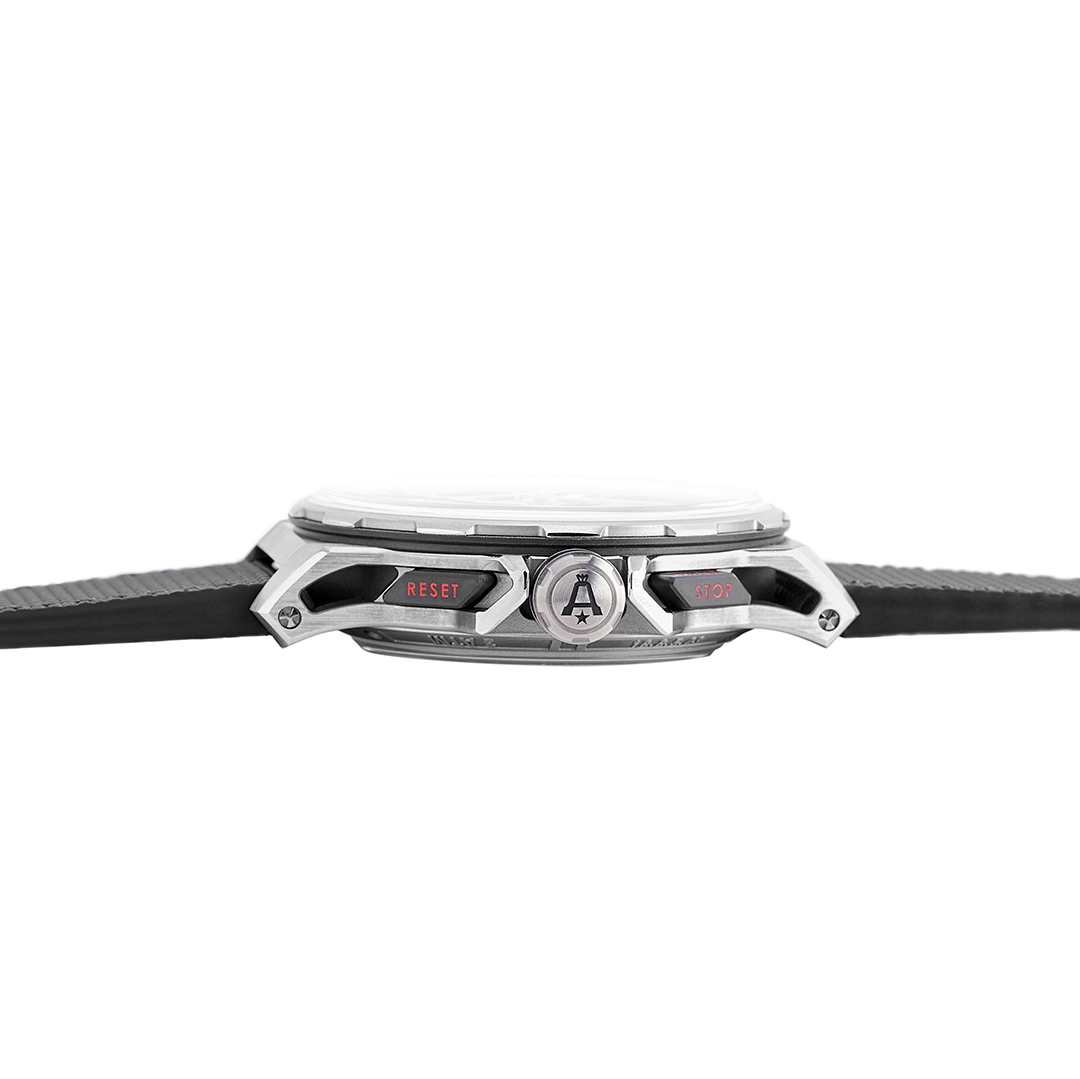 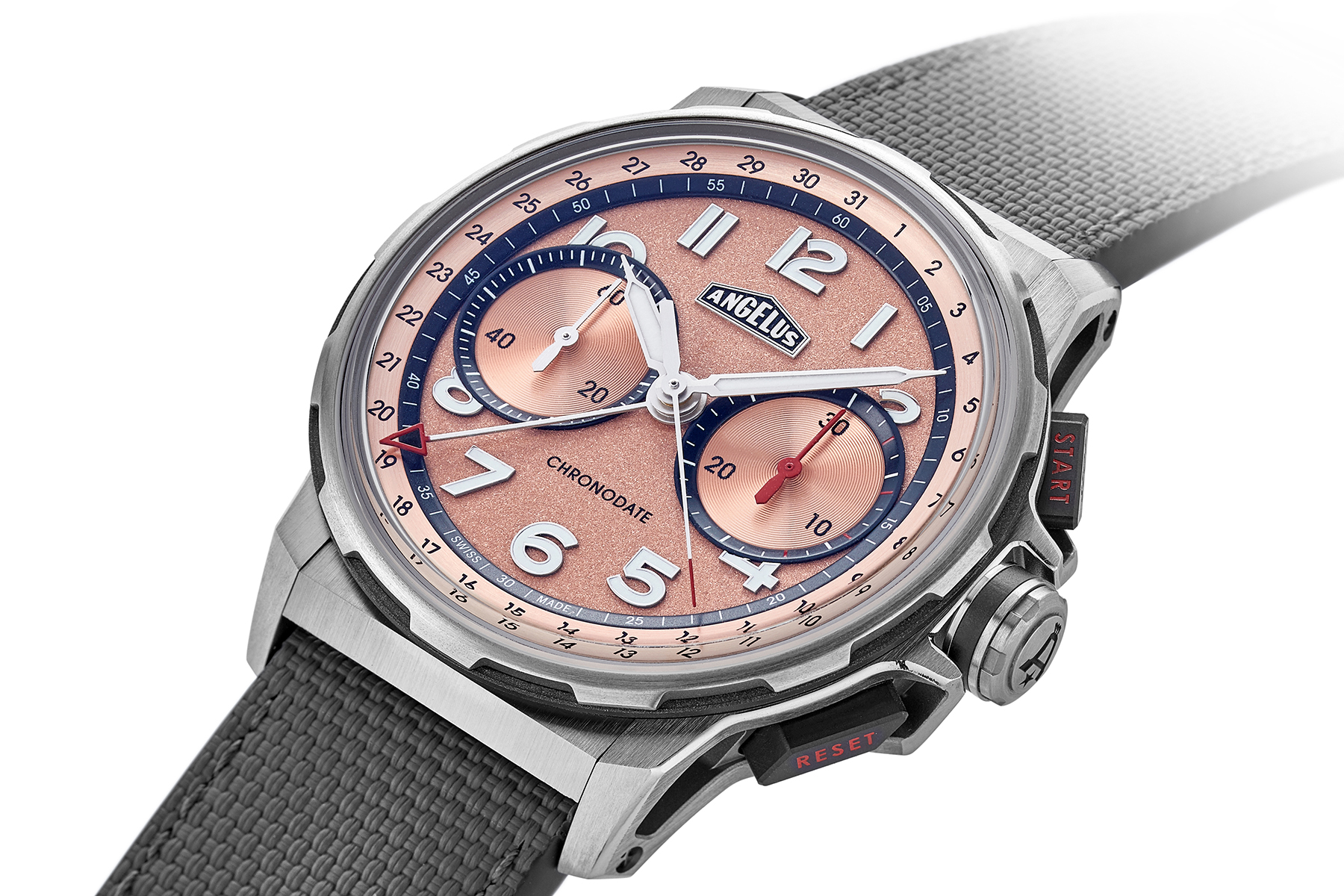 In developing the new Chronodate, Angelus decided to start by adapting the multi-part case used in its flying tourbillon. The case construction is unlike anything else in watchmaking. The movement is fitted into a carbon composite center case, onto which the bezel is fitted, followed by a fully skeletonized titanium outer case. The benefit of the design is increased shock protection, isolating the movement from direct impacts to the case. The pushers themselves are also crafted from carbon composite, with bold red lettering that indicates their function. Finally, the oversized crown is finished with a central rubber element that makes gripping the bezel simple and secure. 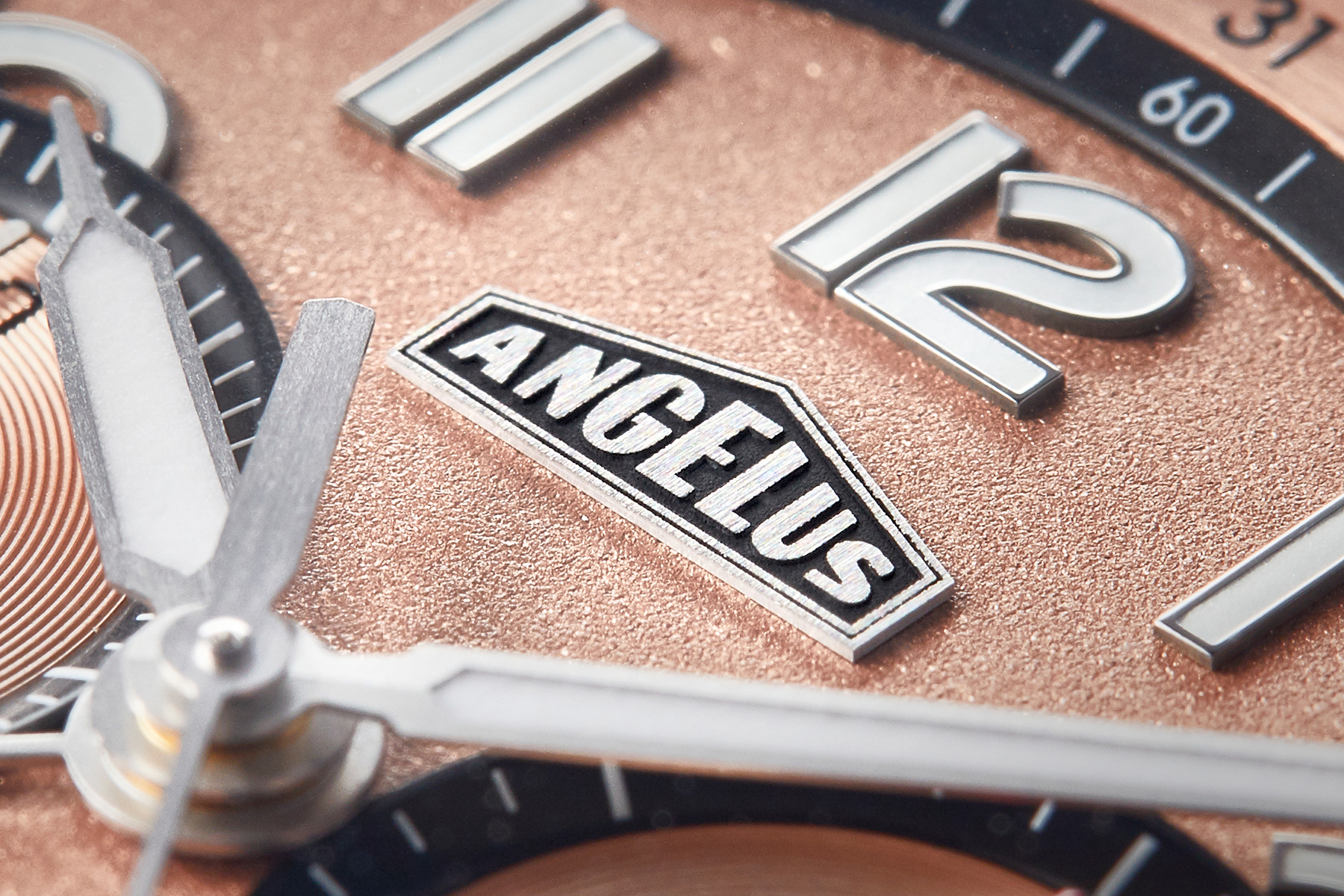 Though the 42.5mm case aligns seamlessly with Angelus’s contemporary design language and is a far cry from the Chronodate of the past, the dial is a clear throwback that has all the distinctive elements of the original Chronodate, albeit with a modern implementation. The two “Big Eye” registers remain the central visual element of the dial, and you’ll still find the classic syringe hands, central pointer with a red-tipped arrow, and luminous applied Arabic indices. However, the dial color and texture are entirely fresh and new. 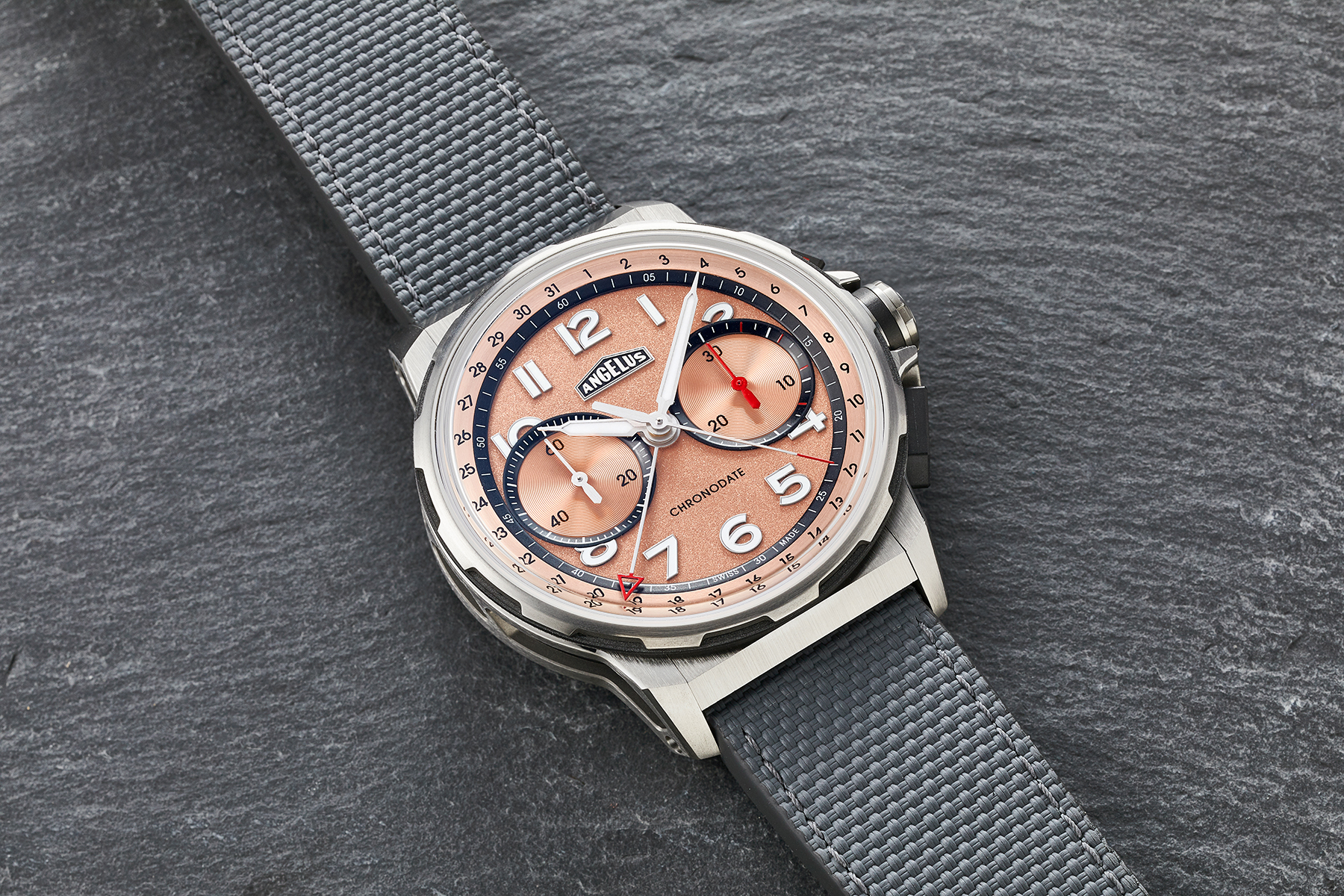 Revolution, known for its penchant for salmon dials, proposed a rose-gold salmon color for this limited-edition collaboration. This particular hue was created by applying a 6N gold plating to a brass dial, allowing the warmth of the brass to shine through, achieving this distinctive hue. However, color is only half the story. The main body of the dial has a grené finish that results in a dynamic, frosted texture. The grené finish acts as a backdrop against the subdials that are finished with delicate snailing, producing a texture that contrasts the main dial. Finally, the outer salmon date track uses a deep circular brushing for a third texture on the dial. Salmon dials are often associated with dressier watches, but by offsetting that warm hue against the dark chapter rings and adding red accents, the watch becomes instantly more sporty and aggressive. 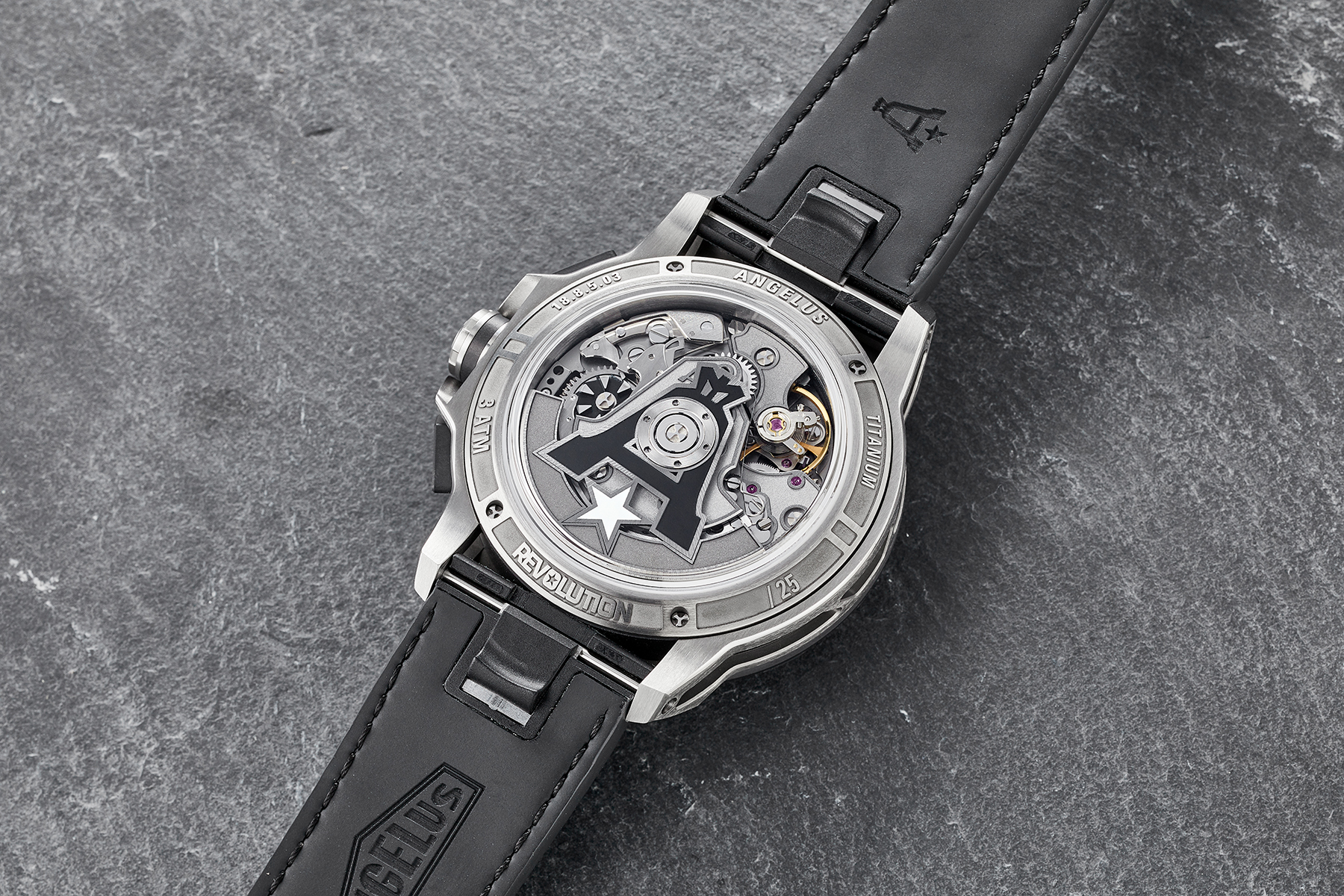 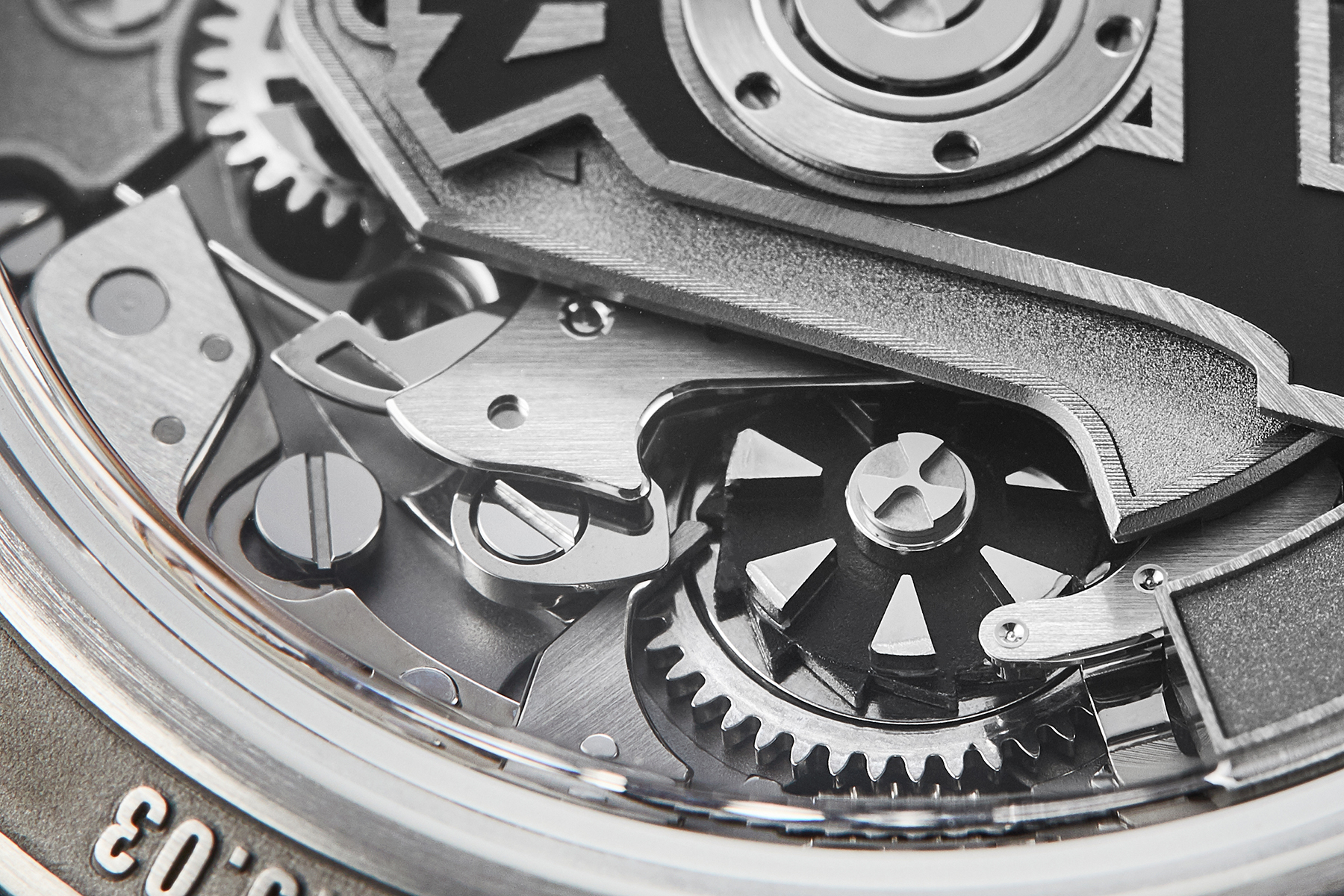 The Angelus x Revolution Chronodate is powered by the caliber A-500. Angelus equips the A-500 with a column wheel, sandblasted NAC-treated bridges, and a proprietary rotor design. The rotor, an afterthought in many watches, is definitely worth a second look. Both Angelus and Revolution utilize a star symbol in their branding, so it only made sense to ensure that a star was a standout feature on the rotor. In this case, the star on the rotor is filled with lume, an element that is certainly unnecessary but is meant to be fun and whimsical, especially when the rotor spins rapidly in the non-winding direction, producing an effect like a shooting star. 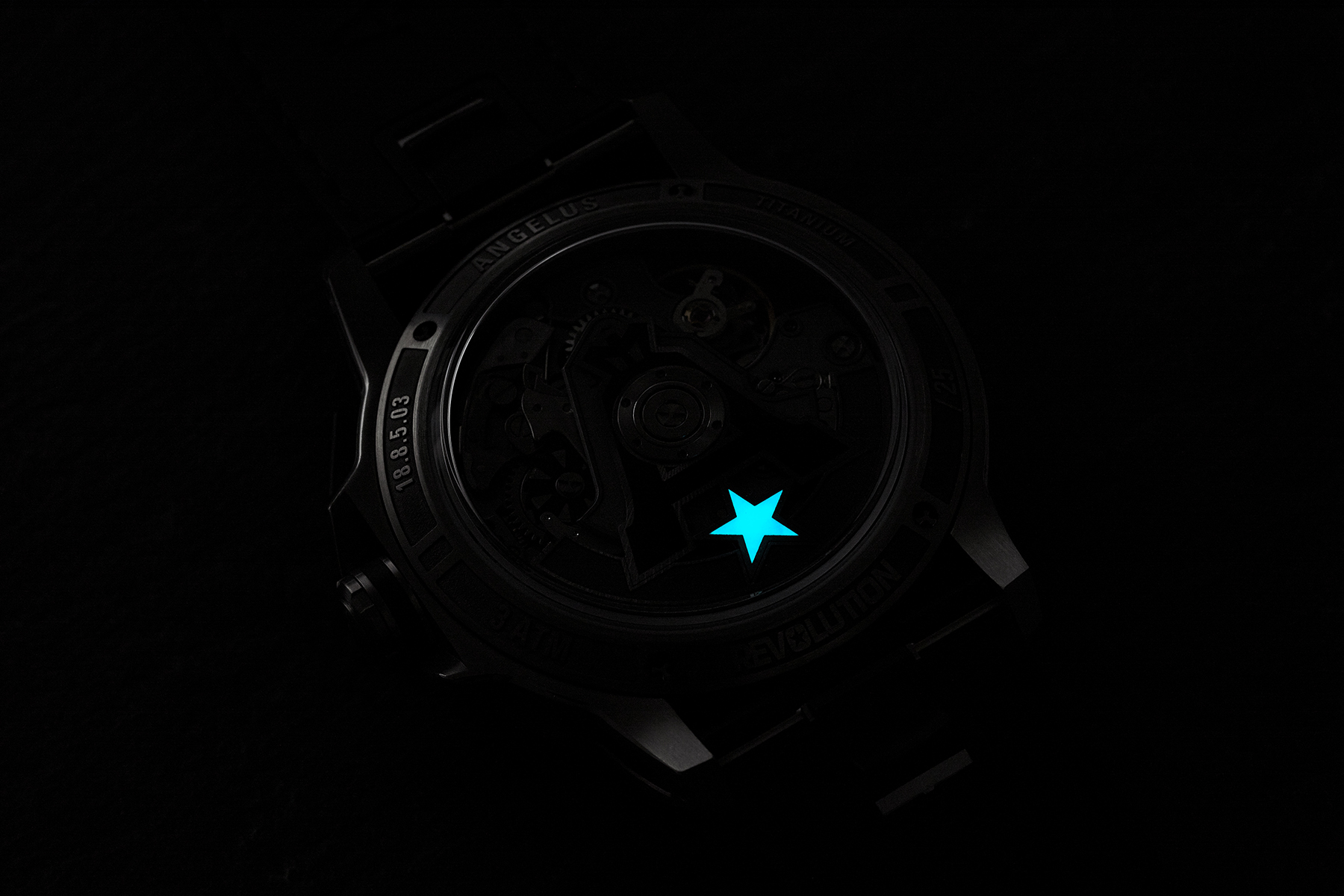 The Chronodate hides yet another surprise for its owner: the inclusion of a bottle of Grand Cru Bordeaux produced by the celebrated Château Angélus, the brand’s namesake. Wine and watches are a natural pairing — even more so when you mix in a touch of local legend. While visiting Château Angélus to find the ideal vintage to pair with the watch, Angelus’ Bertrand Savary and Revolution’s Wei Koh learned of the term “Angels’ Share.” As the story goes, the small amount of wine that evaporates when wine is stored ascends upwards to the heavens, a gift to God’s favorite angels. “Angles’ Share” became the perfect sobriquet for the rosy salmon-dialed Chronodate. 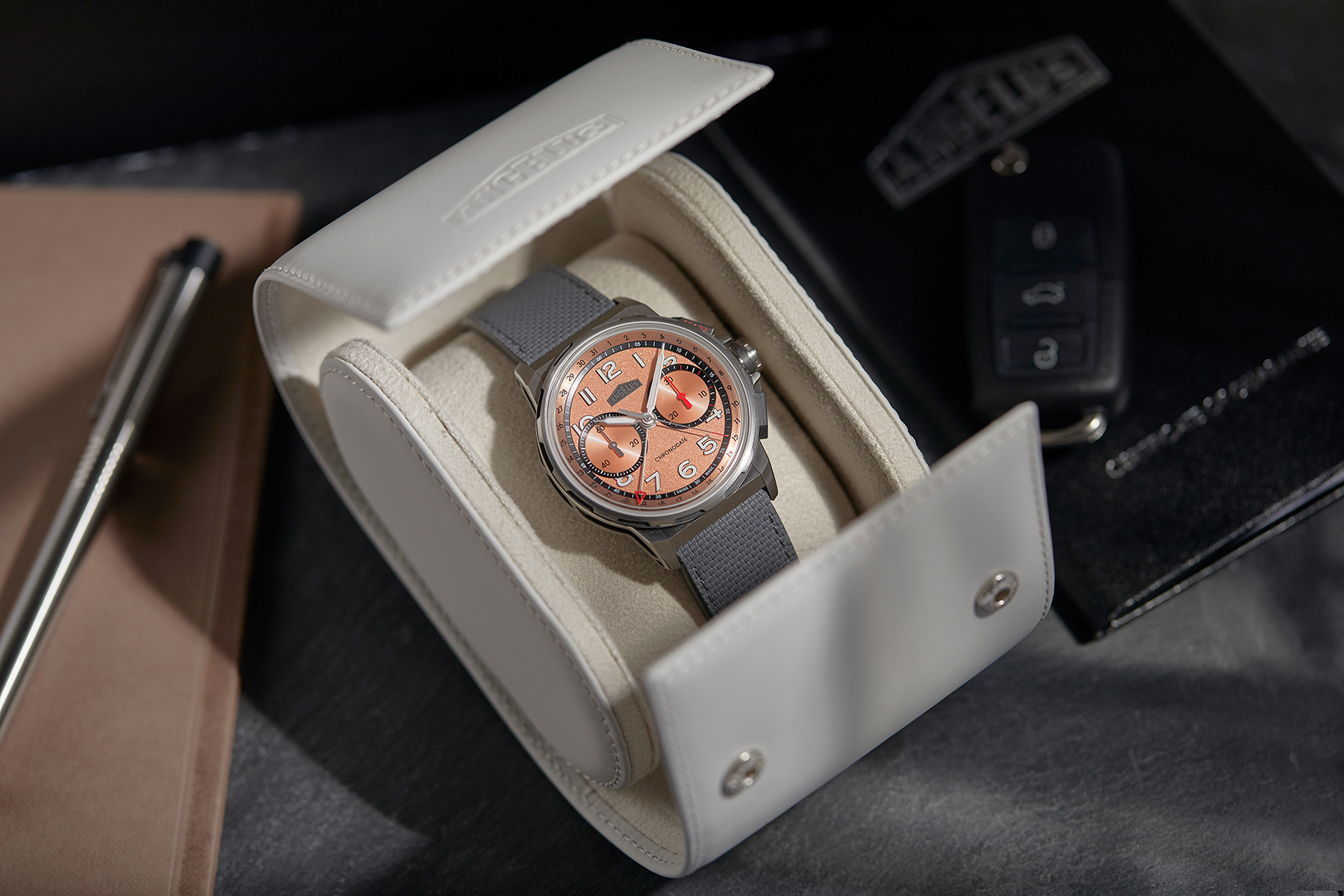