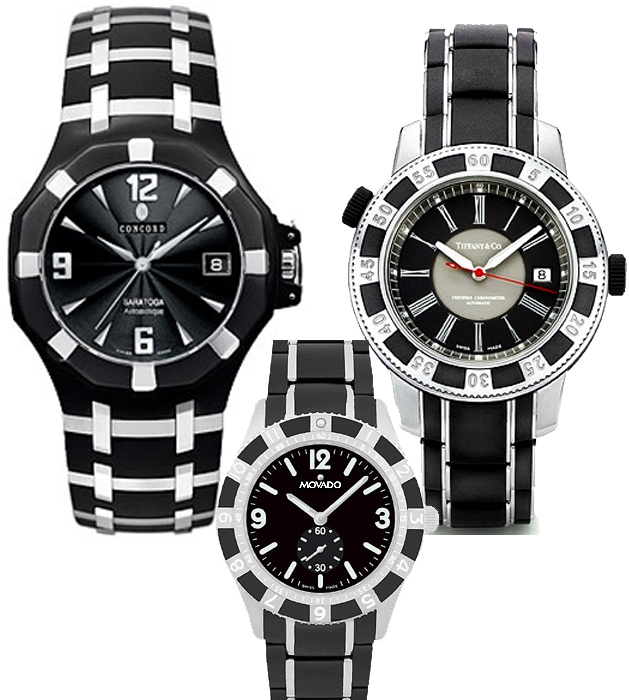 Watch makers can have a good time playing with colors and materials. A typical favorite among watch designers is sharp transitions from one material, color or texture to another. This often yields in an interesting look appealing to the eye due to the constant contrasts. Lights appear lighter, and dark colors appear deeper. This is mostly due to the human eye, which seems to be drawn to such complexities of form.

A particular favorite of mine is the contrast between matte black and polished steel. The austere look of the black works to immediately enhance the sheen of the polished silver colored steel. This effect is somewhat lost when the black itself is always glossy. Creating a series of sharp contrasts, the eye picks up a number of distinct shapes and patterns that come out of the design and construction of the watch. In effect, you get a much better appreciation of the colors and segmentation of the watch because the overall watch stands out so much more.

The three watches pictures from left to right are the Concord Saratoga, Movado Gentry, and Tiffany & Co. Mark T-57. These represent an evolution in the design theme produced in these attractive watches. Starting with the Concord Saratoga that really allowed for the contrasting black and steel to work, which was followed by parent company Movado’s Gentry model. This particular model is the Movado Gentry Sport (as it contains a chronograph complication). Last is the recently released Tiffany & Co. Mark T-57. An obvious copy of the Movado Gentry, Tiffany & Co. would probably describe it as a flattering emulation of a successful design, which it is. While very different watches, the visual appeal is similar in each watch. In the event you do not love the watches themselves, you must admit they hold your gaze longer than you expected, as your eyes seem to subconsciously find some cognitive interest in the watches laid out before you.