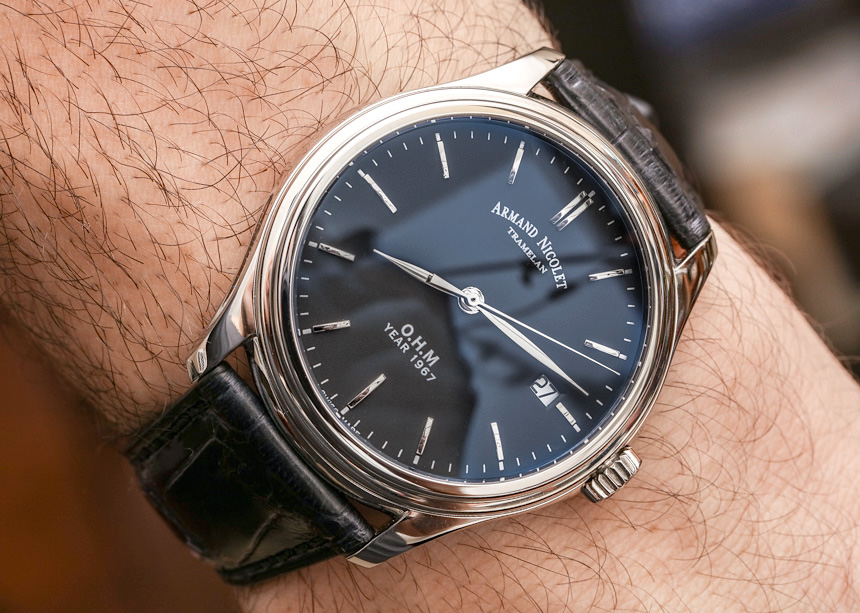 The premise behind Swiss Armand Nicolet‘s “O.H.M” family of products is simple and should appeal to a variety of watch collectors. “O.H.M” stands for “original historical movement,” and the collection features new watches like the Armand Nicolet O.H.M L15 with nicely restored vintage movements inside of them. The movements are said to be restored by Armand Nicolet, and the idea is to combine the best of both worlds in terms of modern materials and construction methods, as well as a decent serving of authentic horological nostalgia.

Armand Nicolet produces a few watches in the O.H.M (OHM) collection, and the new L15 is among the better models as its dressy, traditional looks appear to fit the theme and size of the original A. Schild (AS) 1883 automatic movements rather well. So let’s discuss the movement first, as this is going to be a major reason why someone will be interested in this watch. The design, while distinctive, isn’t likely enough to attract consumers to the L15 collection. So, in my opinion, the real draw here is the combination of the design, materials, and the movement (along with the effort required to present it as it is done in this collection). 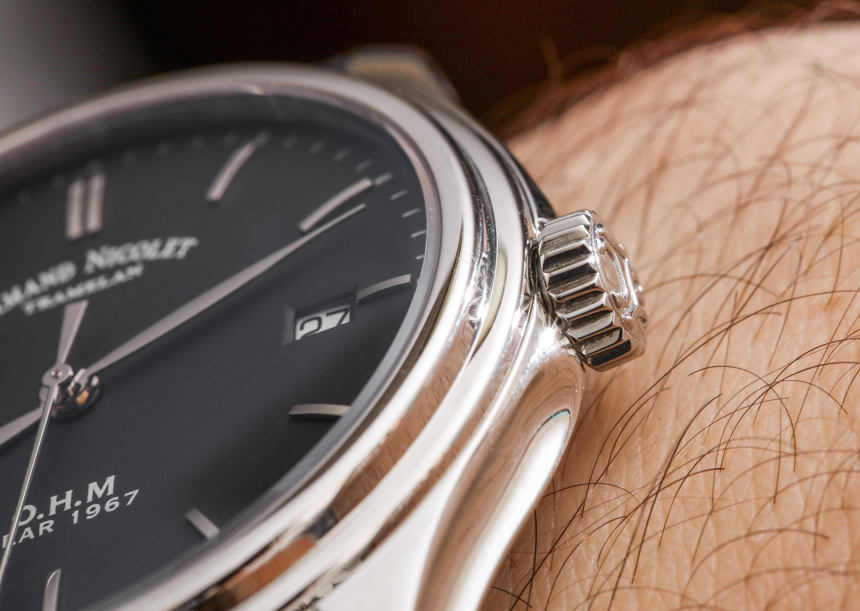 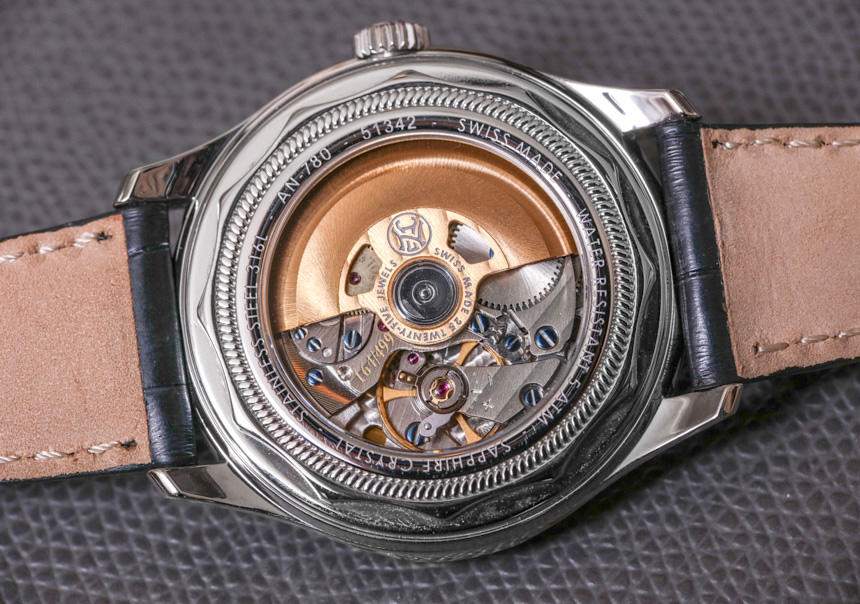 Armand Nicolet claims that all of the 499 movements in this limited edition were produced by A. Schild (a no longer existing watch movement maker) between 1967 and 1971. The actual dial of the watch says “O.H.M” 1967. The movements have been acquired by the brand and then go through a rather extensive restoration and rebuilding process. The movements are not restored in order to look as though they would in the late 1960s, but rather to look better, and on top of that Armond Nicolet includes some more modern parts and of course embellishes the movements with decoration. 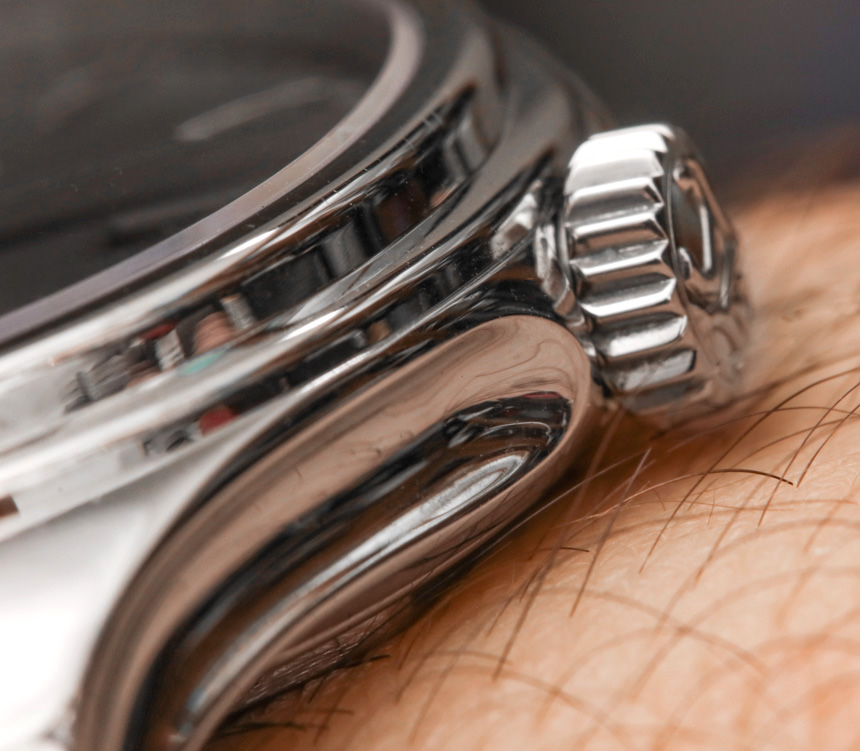 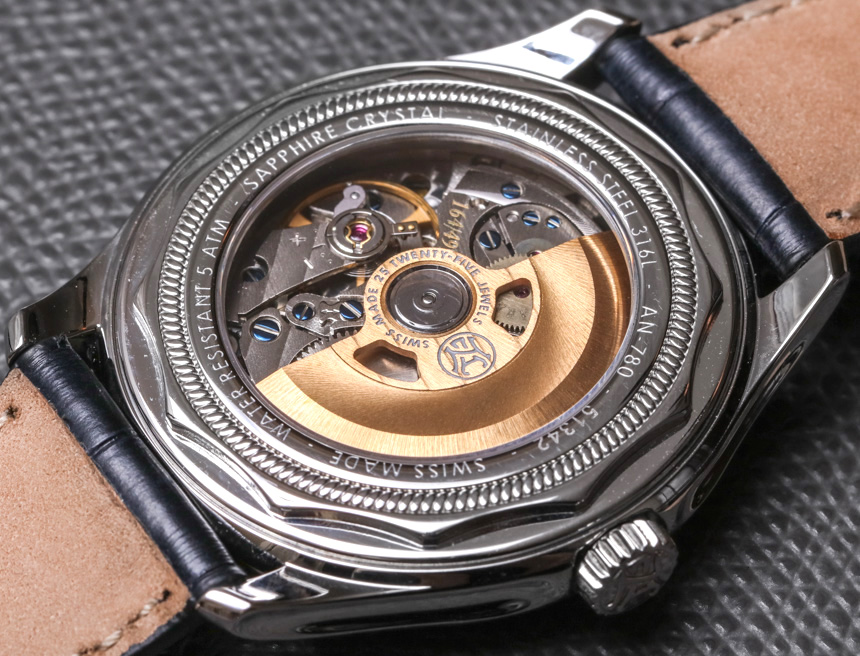 The resulting movements are called the Armand Nicolet caliber AN0703A (aka AN-703A), and thankfully you can admire the movements through the rear of the case via the sapphire crystal exhibition window. Among the functional upgrades is the installation of a shock absorption system in the regulator. The movements have also been given a range of polishes, blue-colored (sadly not flame-blued) screws, and an overall healthy “high-end” sheen. 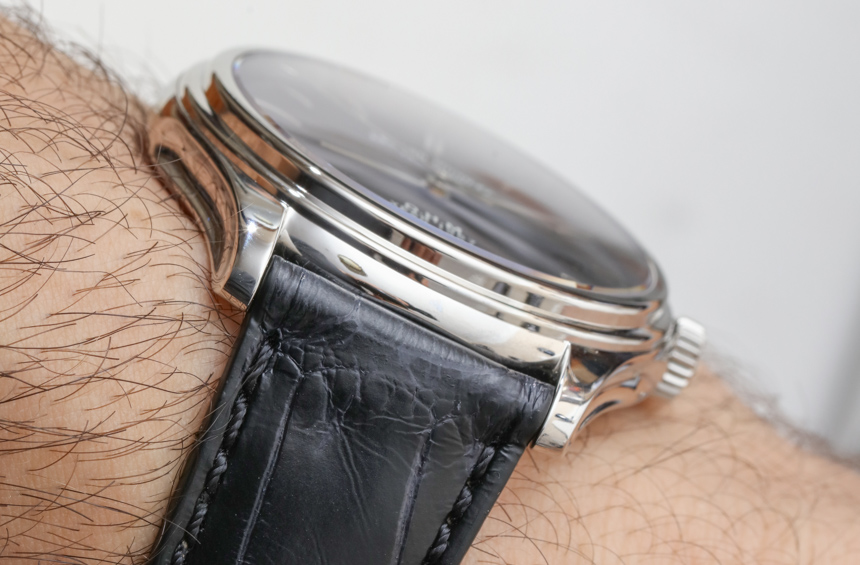 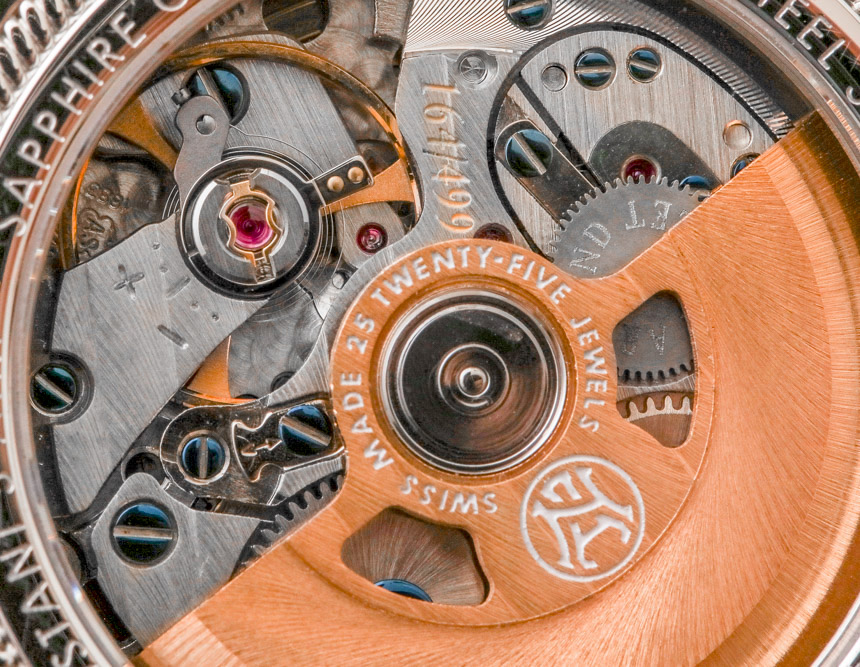 Functionally the AN0703A movements are “historical” as promised. They operate at 3Hz (21,600bph) with just 32 hours of power reserve. Accuracy shouldn’t be too bad, but I think the most modern mechanical movements will likely beat these historic counterparts when it comes to that. The brand is very open about the movement and offers a lot of details about it here. What will make people attached to the OHM family is the story and the nostalgia. It is a fitting concept for a design such as that of the L15. Some of the other Armand Nicolet OHM watches don’t necessarily have the right aesthetic fit for the movement theme in my opinion. 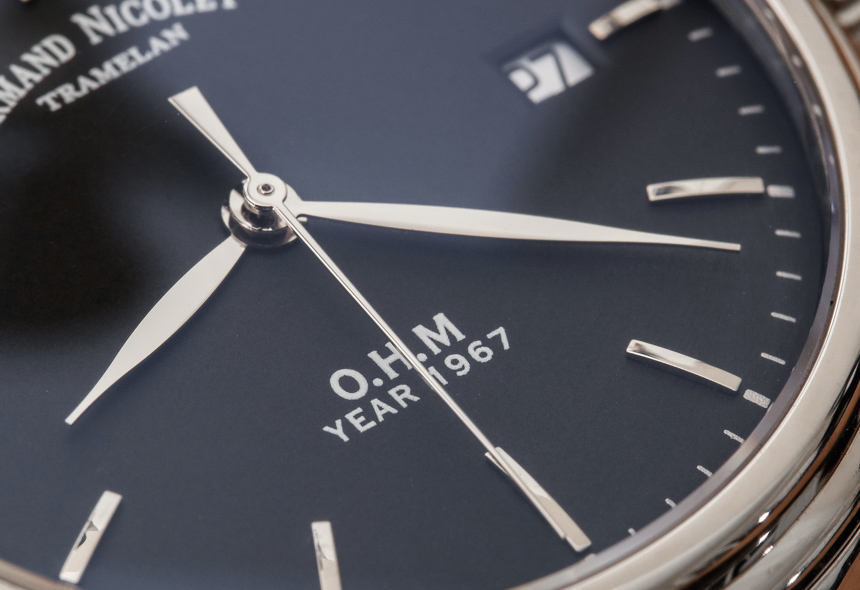 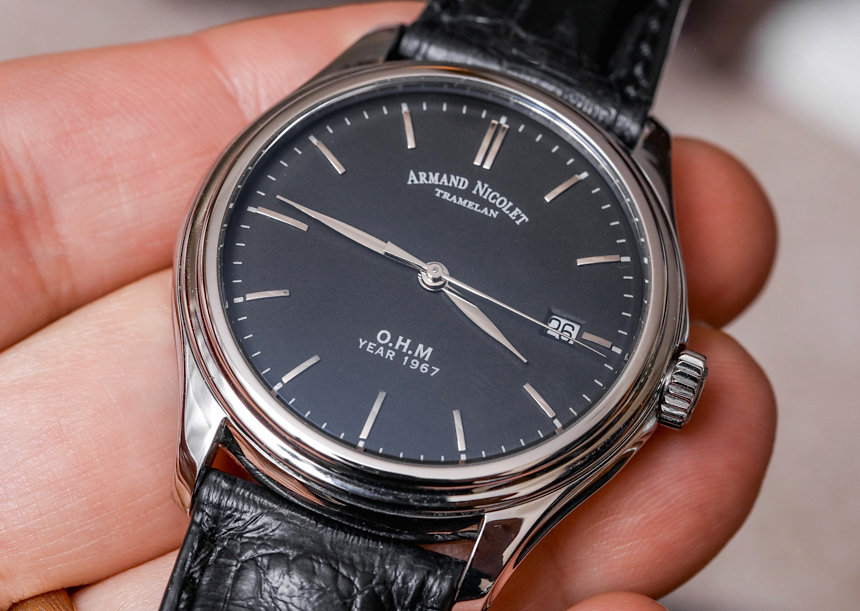 The automatic movement offers the time and date – but don’t think the latter complication has a quick-set feature. You’ll need to pass the hour hand across midnight each time you want the date to change. Hey, it’s all part of the vintage charm right? The dial is otherwise pleasantly simple and retro in its look. Armand Nicolet produces a few dial colors for the L15, and this one is a deep matte dark gray with applied polished hour markers and leaf-style hands. It is on the border of not having quite enough contrast to be legible, but it manages to squeeze out enough legibility to be useful. The lack of top-applied AR-coating on the domed sapphire crystal would make legibility even better. 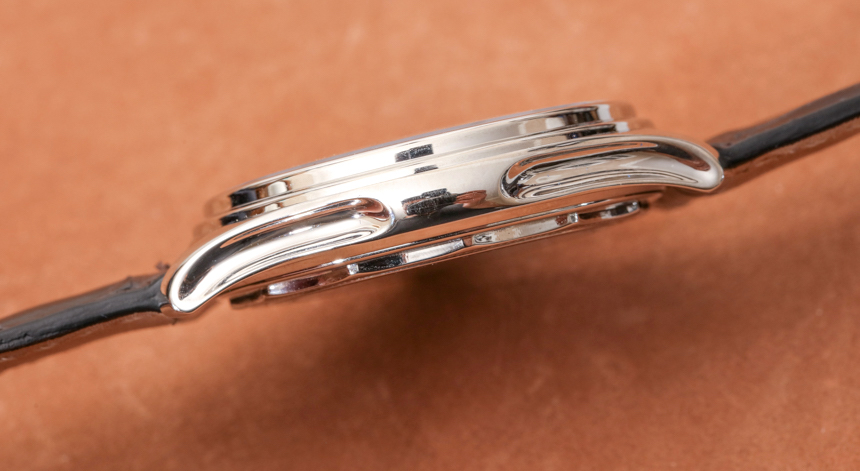 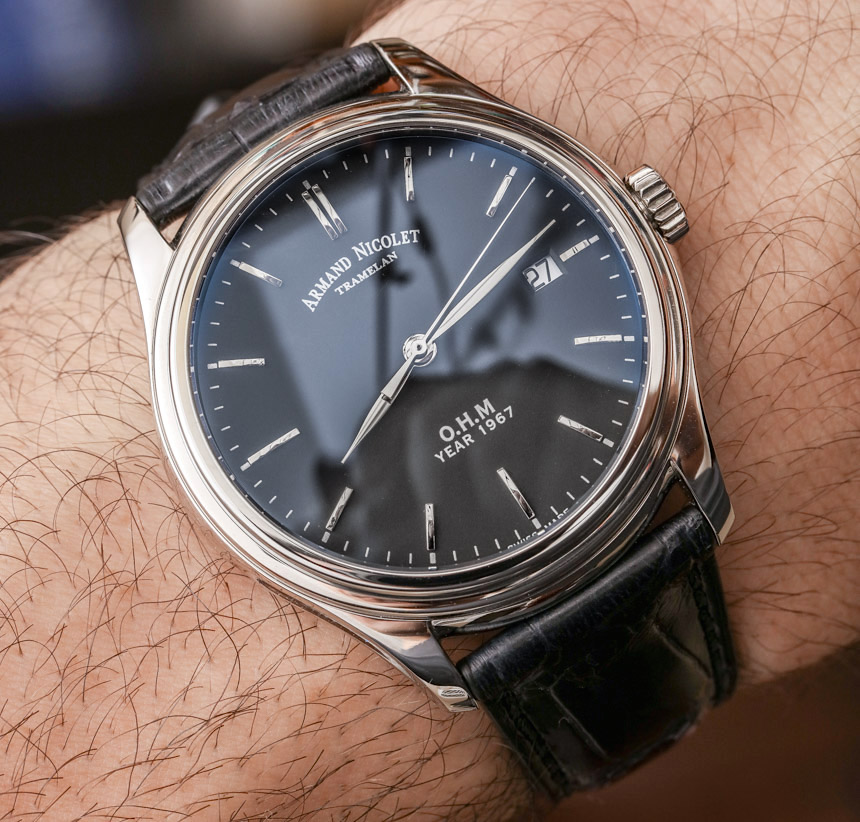 With that said, as a vintage-style dress watch, I do quite like the L15 dial design and find it calming to look at as well as hitting the mark when it comes to the proportions of the hands and hour markers. The date window is rather small and will be hard to read for those with eyesight that isn’t perfect. 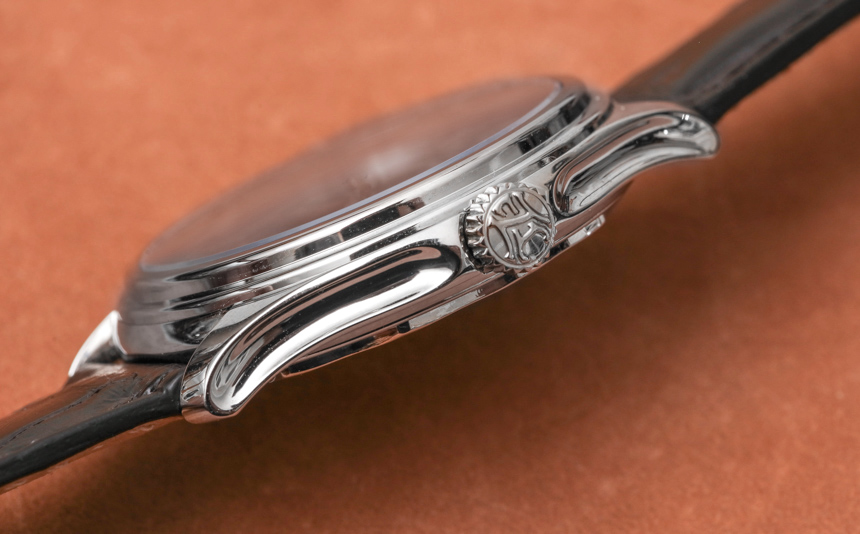 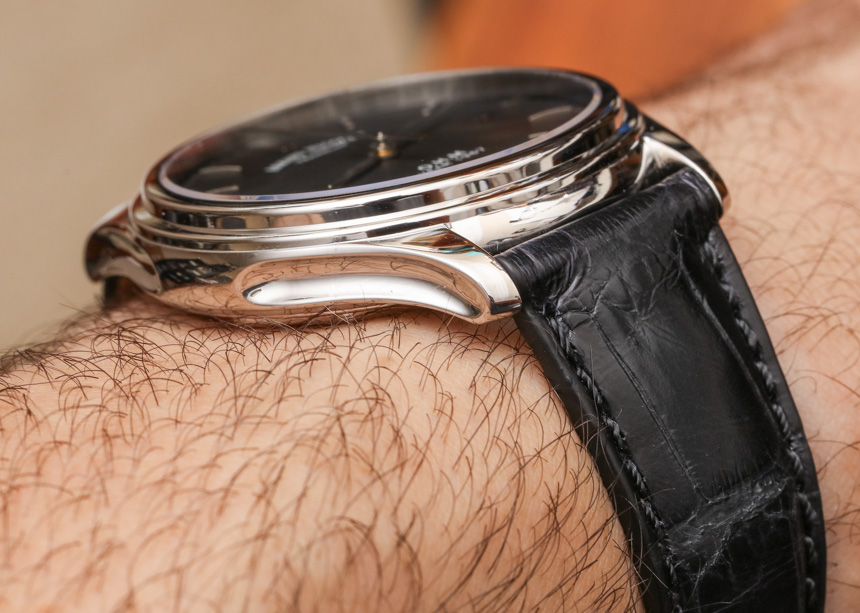 A surprisingly nice feature is the design of the case. Armand Nicolet offers five versions of the L15 this year, with three in steel, one in steel with an 18k rose gold bezel and crown, and one version in all 18k rose gold. The case is 39mm wide and entirely polished. What I like the most is the design of the case with its interesting contours (especially on the side) and overall very pleasing aesthetic design. I really like the visual effect of having a relatively simple dial with a more elaborate case – which is what the Armand Nicolet O.H.M L15 offers. This is a rare thing to find, especially in modestly sized dress watches of this ilk. So again, if you handle one of these watches, I think you too will appreciate the case design. The case is also water resistant to 50m and is a relatively svelte 10mm thick. 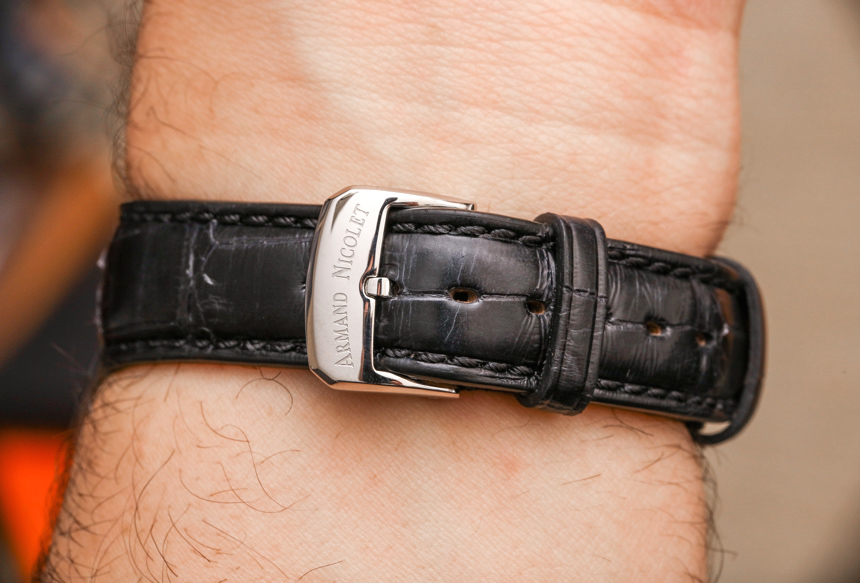 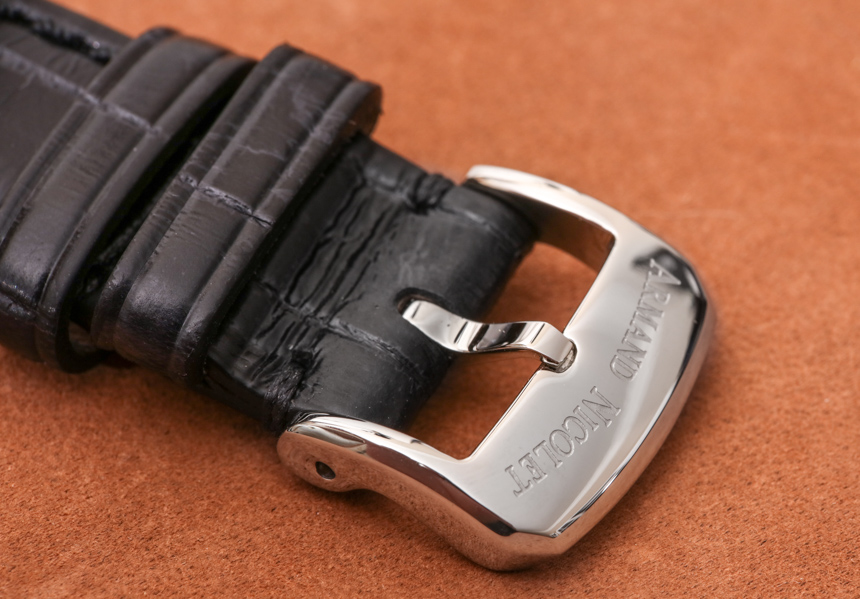 Attached to the case is a black “big scales” alligator strap that is both soft and comfortable. The strap is a nice quality. I think that all dress watches should be paired with a nice strap. Not doing so is really prejudicial to the outcome of having a decent to wear formal timepiece. 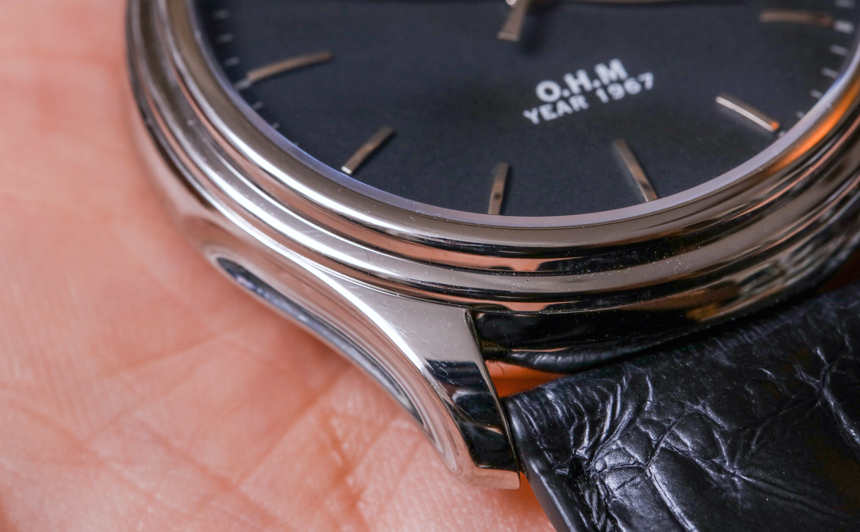 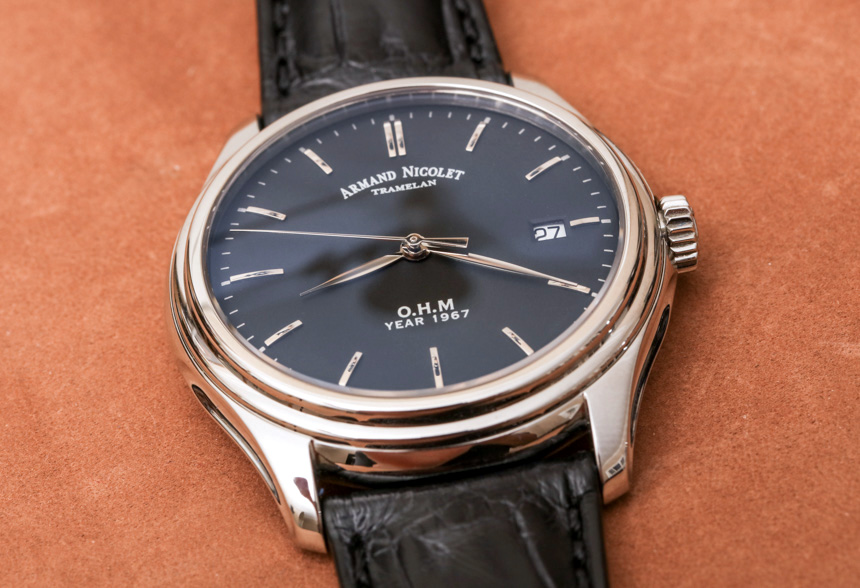 Dress watches aren’t nearly as popular these days as sports watches, but they do have their place, for sure. I think the dress watch market is tough because the most appealing dress watches have fancy movements and very high-end constructions, but also tend to be very high in price. That can conflict with the “once in a while” wearing nature of dress watches, meaning that not all watch lovers are ready to invest big money into a timepiece they might not wear on a regular basis. Dress watches tend to be a bit more subdued in design, which also means that they don’t do as good of a job at telling the world “Hey everyone, I want you to notice my nice high-end watch.” What I’m trying to say is that while you can get a lot of really appealing dress watches for $15,000 USD and up, there aren’t as many truly compelling models for prices way under that. There are some for sure, but not as many as I’d like. 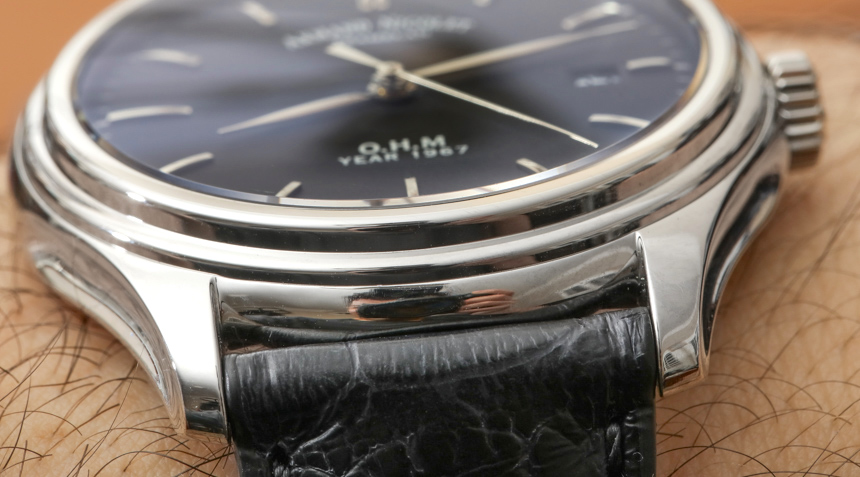 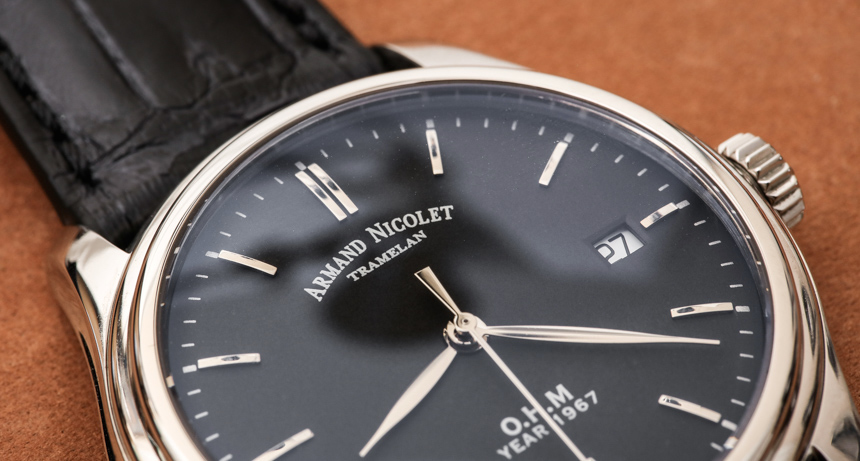 Finding nice “boutique” dress watches at the $5,000 and under price is doable, but it takes a bit of hunting. Armand Nicolet’s strongest entrant into this arena is the L15, and with its limited edition status and use of restored vintage mechanical movements, I think it offers a nice blend of features that isn’t easy to find elsewhere. The brand can work a bit on dial legibility, but otherwise, they have a pretty nice product on their hands. 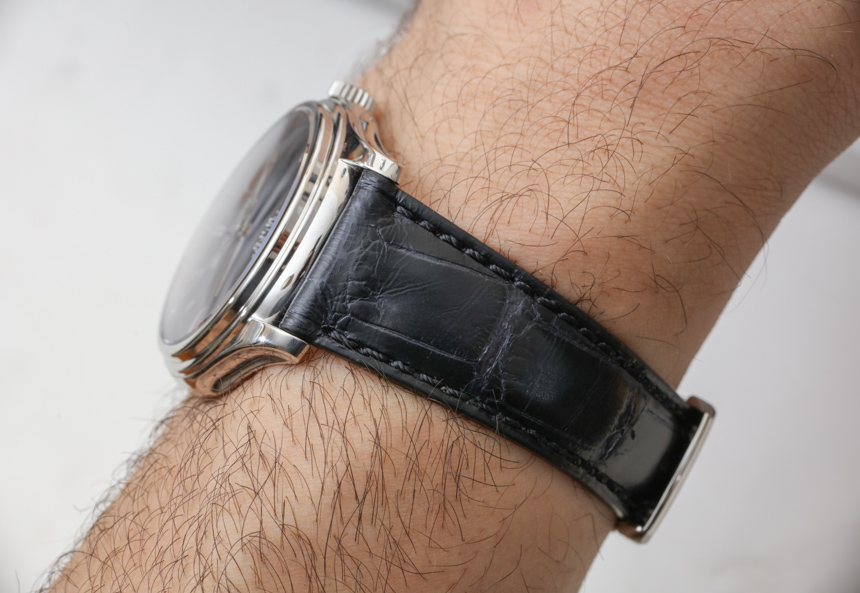 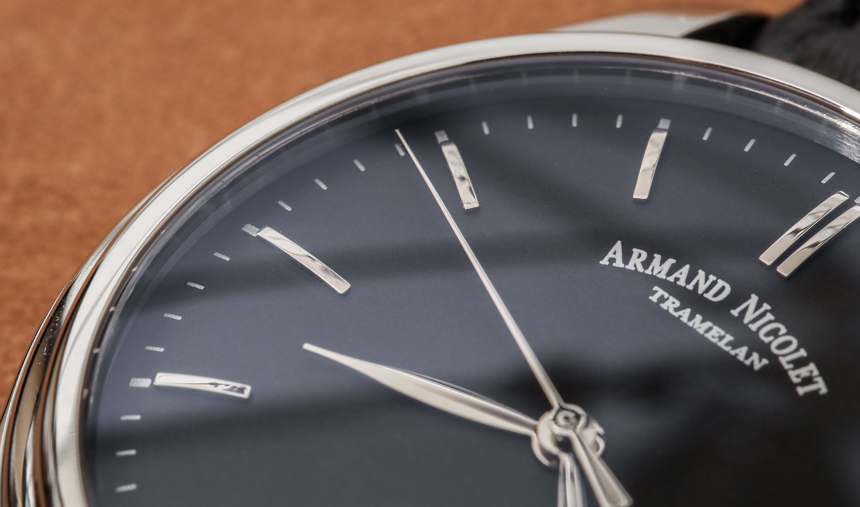 Necessary Data
>Brand: Armand Nicolet
>Model: O.H.M L15 (reference A780AAA-NR-PI0780NA as tested)
>Price: 4,700 Swiss Francs
>Size: 39mm wide
>Would reviewer personally wear it: When the occasion calls for it.
>Friend we’d recommend it to first: Regular dress watch wearer with a fond nostalgia for vintage, albeit practical mechanical movements.
>Best characteristic of watch: Really nice and unexpected case design. Comfortable to wear and conservative for a range of formal watch uses. Combines a decently appealing design with a good “inside” story that real watch lovers will enjoy telling to anyone interested in their timepiece.
>Worst characteristic of watch: Domed sapphire crystal lacks top-applied AR-coating which creates some unwelcome glare that negatively effects legibility. Requires watch lovers both interested in the romance of the movements as well as the romance of the design. Thus, the O.H.M L15 collection is inherently a niche-appeal product.