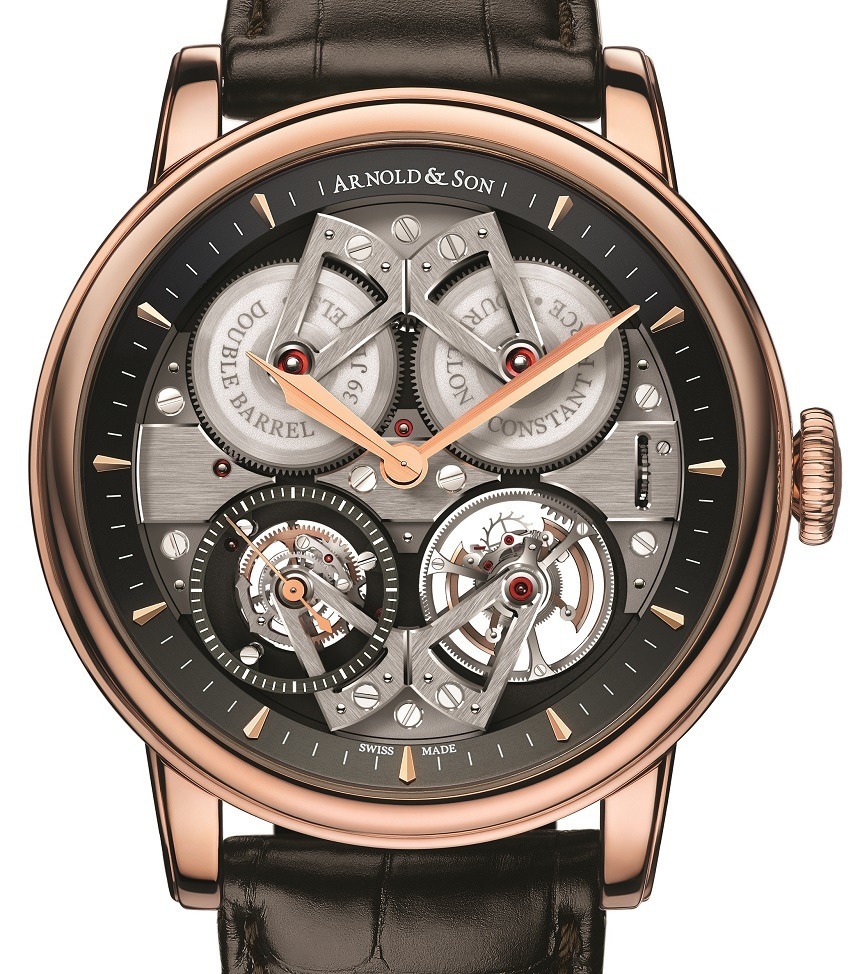 When trying to solve a problem, the beginning is always a good place to start. That’s exactly the process followed by Arnold & Son in their attempt to eliminate isochronal error from one of their newest pieces, the Arnold & Son Constant Force Tourbillon. Arnold & Son’s heritage exists in the legacy of John Arnold and his son, two of the greatest watchmakers to ever come out of England. So revered was Arnold that Abraham-Louis Breguet himself sent him his own son as an apprentice, while Arnold returned the favour. Having packed off his son to learn at the knee of the Swiss maestro, Arnold turned his attentions to the problem of the times: the quest for chronometric accuracy at sea. 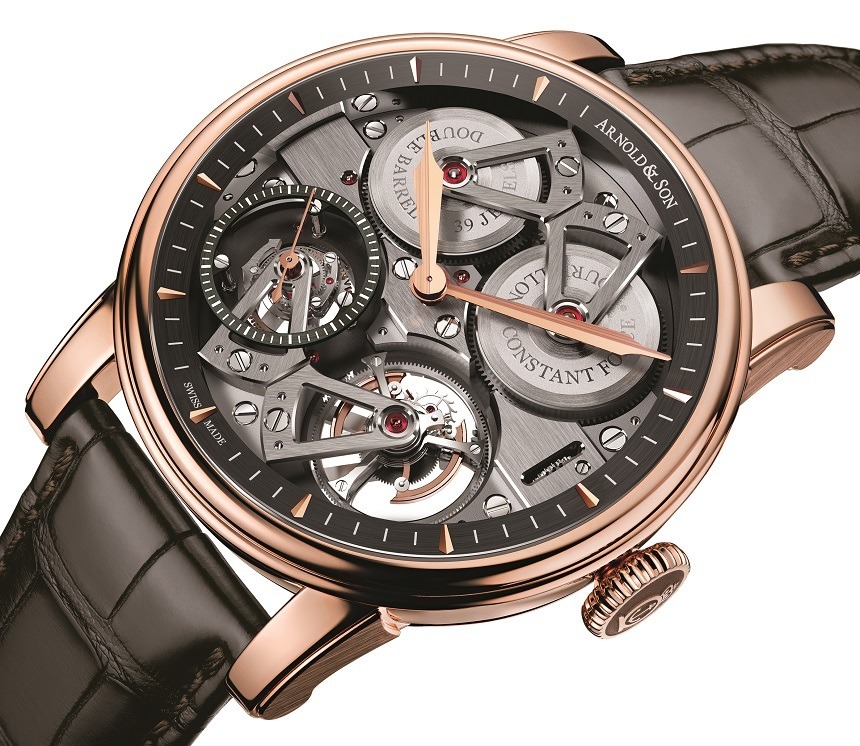 One of the greatest problems when it comes to accuracy is moderating the supply of power to the regulating organ of the timepiece (in this case, the tourbillon featured in the lower right quadrant of the dial). The mainspring, like any component of this size, is susceptible to certain molecular inconsistencies acquired during the creation process. Any external or internal inconsistency could result in a fluctuation of power delivered to the gear train. And that’s before one even considers the drastic drop-off in torque when the mainspring sufficiently uncoils. As the mainspring winds down, the amount of power delivered to the escapement dips. This can potentially play havoc with the timekeeping, so Arnold & Son have tried to eliminate this error by installing a “constant-force” mechanism. The modern incarnation of the company that lay dormant for over a century is doing what it can to reconnect with the source of its inspiration. 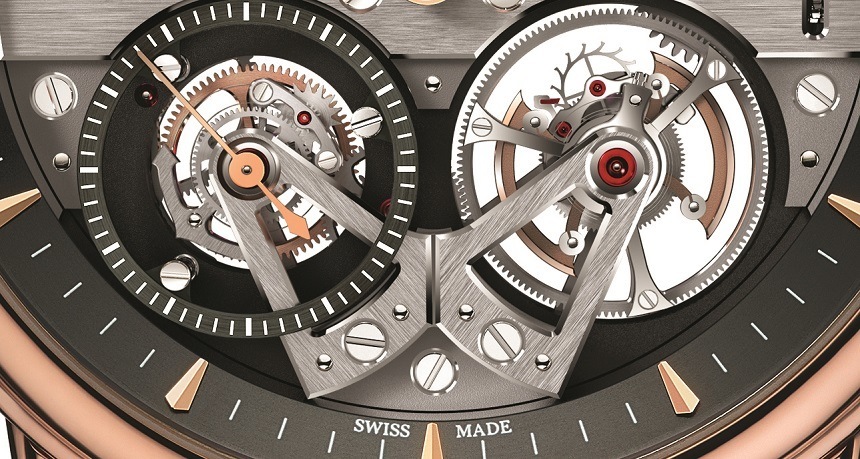 Practically speaking, this component takes the place of a fuseé, which is an old-fashioned constant force complication we’ve seen on aBlogtoWatch very recently in the new Zenith Academy Georges Favre-Jacot Anniversary piece (read the review here), for example. To compensate for the inevitable drop-off in power generated by a single barrel in a standard set-up, Arnold & Son have started out with two symmetrical barrels in series. The first barrel powers the gear train, while the second barrel tops up the torque of the first whenever it drops below an optimal level. But their innovation does not stop there… 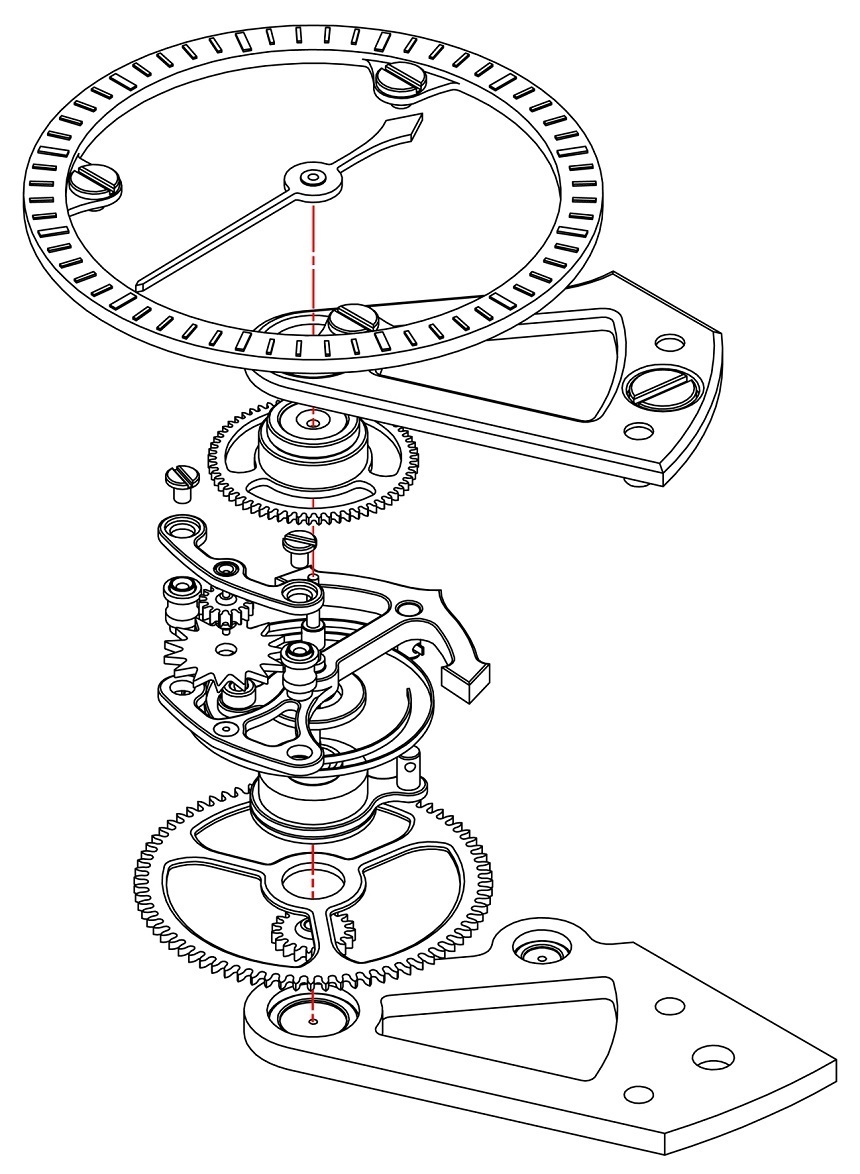 Instead of the power from the mainspring flowing directly into the escapement, it must first pass through Arnold & Son’s constant force mechanism. The already regulated power supply charges a small hairspring, which releases a consistent amount of force to the tourbillon once per second. With this mechanism, there will still come a point when the power released by the twin barrels and the constant force mechanism drops below a point that is sufficient to maintain a regular output. When this happens, the watch stops rather than allowing an isochronal error to creep into the timekeeping. 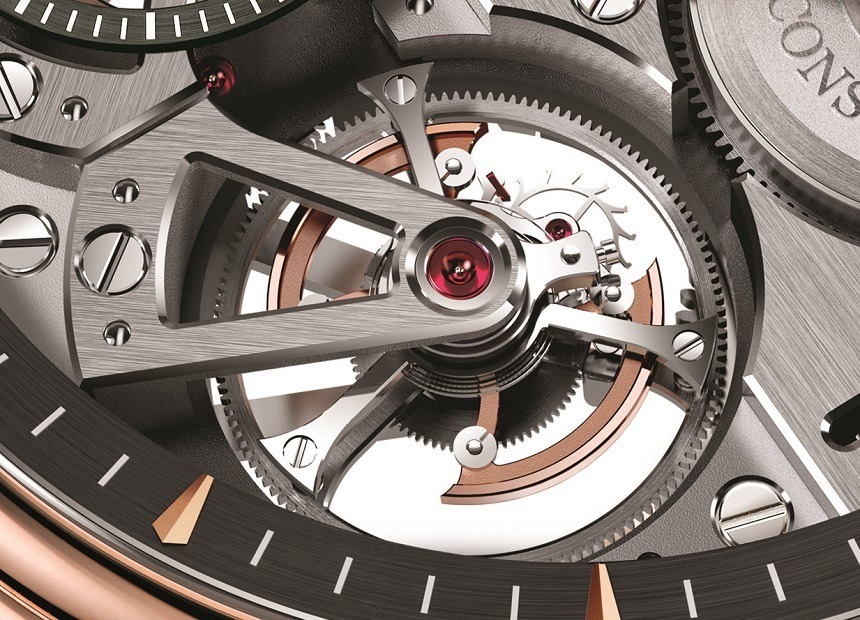 In addition to this interesting solution, the Arnold & Son Constant Force Tourbillon features a deadbeat seconds complication, which causes the seconds hand to “tick” rather than sweep as one might expect in a mechanical timepiece. Exceptional consistency is achieved thanks to the symmetry of the movement’s construction, as well as the fact that the constant force escapement remains stationary throughout operation, while the tourbillon cage rotates once per minute. This is in an attempt to reduce the influence of gravity on the escapement’s operation. Assuming, though, that this watch is unlikely to be worn in the presence of strong magnetic fields (it’s hardly suitable for use on a construction site or while flying a helicopter, for example), the complication perfectly suits the intended application. 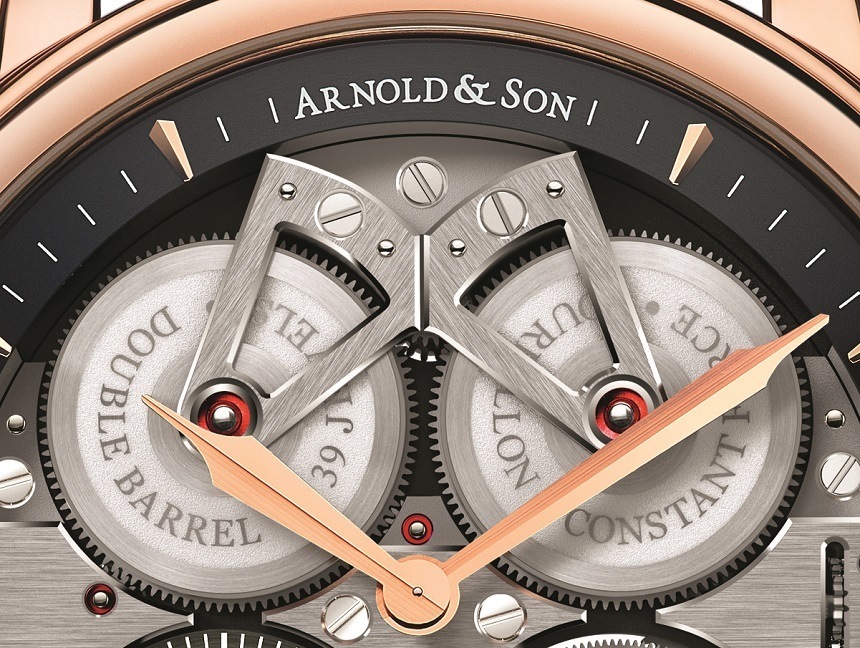 The Arnold & Son Constant Force Tourbillon watch is a limited edition of which only 28 will be made. It has a 46mm 18ct rose gold case fitted with an anti-reflective sapphire crystal and a sapphire display back. The A&S5119 movement has 39 jewels, a thickness of 6mm, a 90-hour power reserve, and operates at 21,600vph. The NAC grey mainplate and the palladium-coated bridges are made of nickel-silver and hand-finished with polished edges and brushed surfaces, gold screw-down chatons, and bevelled and polished screw heads. The movement is almost perfectly symmetrical, and all the technical components are visible on the dial-side. The three-dimensional movement architecture is designed to echo the English tradition of marine chronometer construction. The watch is water resistant to 30 metres and comes on a hand-stitched brown leather alligator strap. Price is available on request. arnoldandson.com