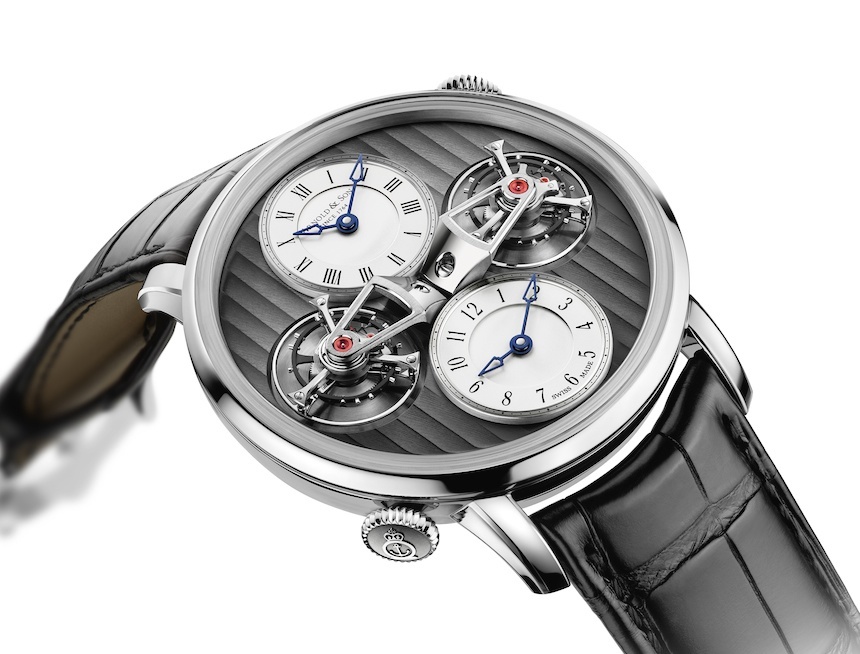 It’s always nice to see brands celebrating their heritage appropriately. The new Arnold & Son DTE Double Tourbillon Escapement Dual Time watch does just that. Few brands around these days have the luxury of being able to claim their founder played a role in the creation of a complication, much less one as famous and ubiquitous as the tourbillon. Despite the fact that Arnold & Son have not been in continuous operation since the foundation of the company in 1764, the renaissance of the brand owes much to the longevity of John Arnold’s professional legacy, embellished through time by his personal friendship with Abraham Louis-Breguet.

John Arnold was one of the finest watchmakers of his time. A chronometer specialist by trade, his influence on his contemporary, and ultimate legend, Abraham-Louis Breguet is debatable, but the respect the two shared is not. Both men sent their sons to study under the other. And it is through Breguet’s most famous invention – the tourbillon – that the two become indelibly linked for all of time. You see, it was in Arnold’s watch – the No. 11 movement – that Breguet’s famed complication made its first appearance. And now, almost 250 years later, the reborn Arnold & Son honors that collaboration with the release of a twin-tourbillon model that is packed full of brand DNA and practical features. 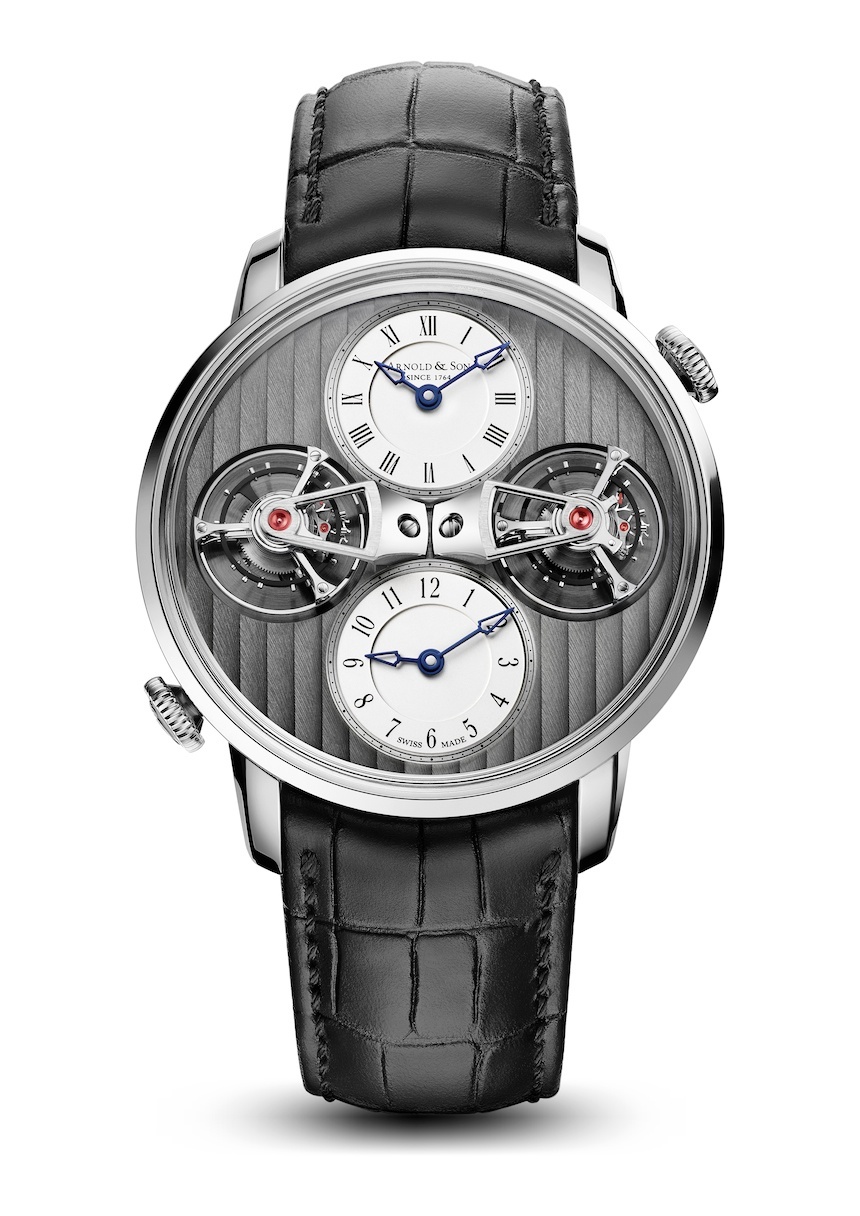 The Arnold & Son DTE Double Tourbillon Escapement Dual Time watch case shape is quintessentially Arnold & Son and measures 43.5mm wide in 18k white gold. It is a very elegant design, with smooth, flowing lugs that affix to either a brown or black hand-stitched alligator strap – the choice is yours. The Arnold & Son DTE Double Tourbillon Escapement Dual Time watch is styled to match both colors well, which is a thoughtful touch that could well tip the scales for a potential purchaser. What this case does well is make its presence known without overbearing the main event. It is effectively a highly polished frame and it plays this role very well. It retains its own character thanks to the twin crowns (one at two and one at eight o’clock). Not only is their placement unusual (and totally functional), they are really beautifully fashioned things, featuring the proud logo of this historic brand. I’m a sucker for a good crown, and this one is up there as one of the best, in my opinion. Having two of them only makes it better and, for me, changes this case from boring to quietly cool. 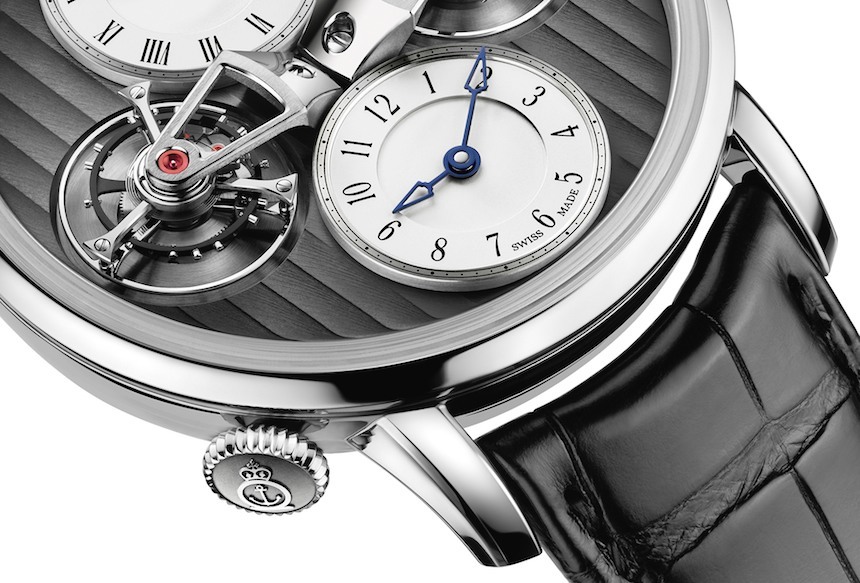 So what do those two crowns do? Although we have covered the Arnold & Son DTE Double Tourbillon Escapement Dual Time watch before, for those who are seeing it for the first time, we will elaborate on that. As the name of the watch – which can be shortened to the Arnold & Son DTE – suggests, this watch features more than the two dial-mounted tourbillons, as those are matched to two time zones as well! Now, this isn’t your run of the mill world timer, with a proxy hand to indicate a second time zone, oh no – this is a dual time watch in the literal sense of the word. Those two silvery opaline dials on the face of the watch can be independently set by those two crowns so that any time can appear on either. In fact, these dials are so independent of each other, they even have their own train, escapement, and thus, tourbillon. They do, however, share a pair of barrels that are wound by the 2 o’clock crown and generate an impressive power reserve of 90 hours.

The first practical advantage of being able to set two dials independently is that not all time zones are separated by one hour increments. There are some that need to be set to half past the hour and a couple that require a quarter-hour differential. The second cool feature – and one that is arguably much more useful – is that you can set one of the dials to 12:00 and use it as a 12-hour chronograph (with to-the-minute accuracy, as there is no seconds hand).

The time is displayed by blued hour and minute hands, which, along with the dial backgrounds, are identical despite the fact that one dial (at 6 o’clock) features Arabic numerals and the other (at 12) Roman numerals. It was wise of Arnold & Son not to add seconds hands to these two independent dials: they are governed by separate escapements, which means their timekeeping would be unavoidably different – although for the ultimate watch nerd experience, it sure would be cool to see by how much the two are off from one another. One would hope that a properly functioning tourbillon would eliminate the majority of positional error, but even so, we could expect infinitesimal fluctuations. 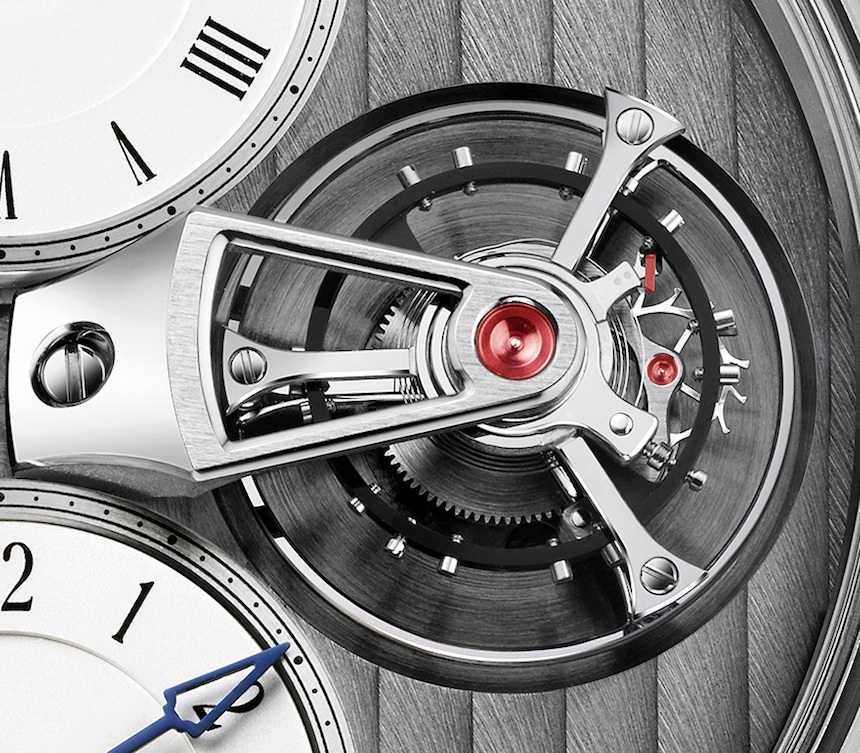 You can’t ignore the depth of this dial – for me, and I am sure I am not alone with this, a multi-levelled dial can really make a watch stand out. A common criticism of dials of this nature is that they are too modern. Traditional techniques result in a much more 2D effect, but with the Arnold & Son DTE Double Tourbillon Escapement Dual Time watch we see an example of how both camps can be satisfied. Sure, it’s not going to be to everyone’s taste, but it is a good attempt at establishing a common ground. 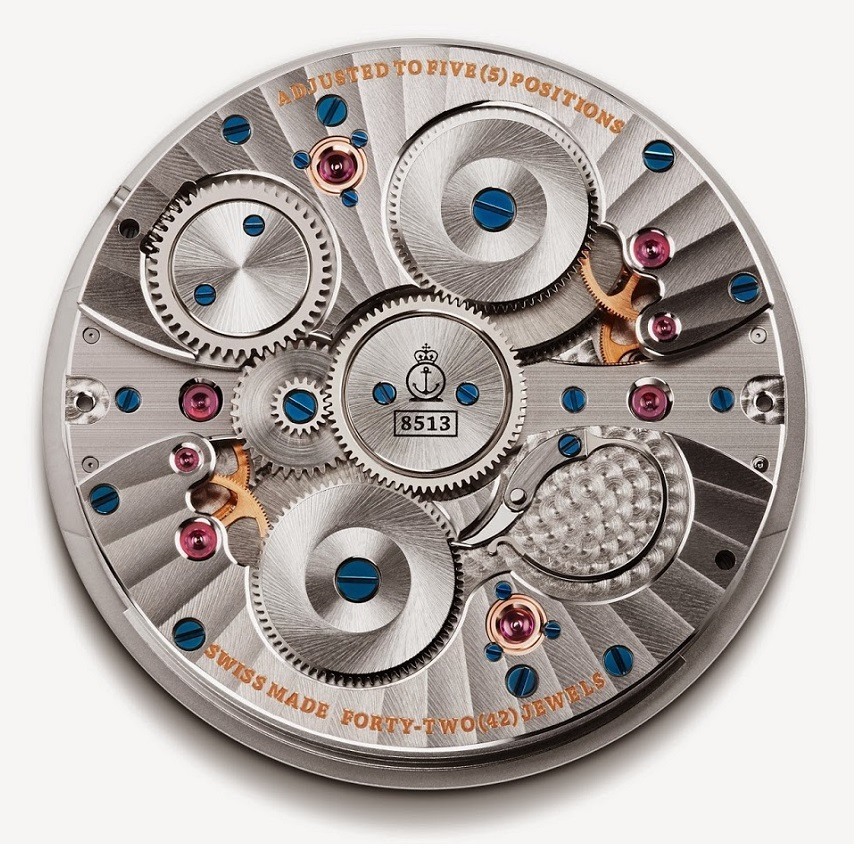 This is a nice shot of the AS8513 calibre out of the watch from Height of Horology.

The Arnold & Son DTE Double Tourbillon Escapement Dual Time contains the A&S8513 calibre, which is a nickel silver movement with an NAC gray coating. The bridges and wheels are hand chamfered with polished edges, and the screws are bevelled to further enhance the play of light across the many surface finishes. There is a see through sapphire case back and the watch is water resistant to 30 meters. The movement is 37.3mm wide (making the most of the 43.5mm case), 8.35mm thick, and operates at 21,600vph. 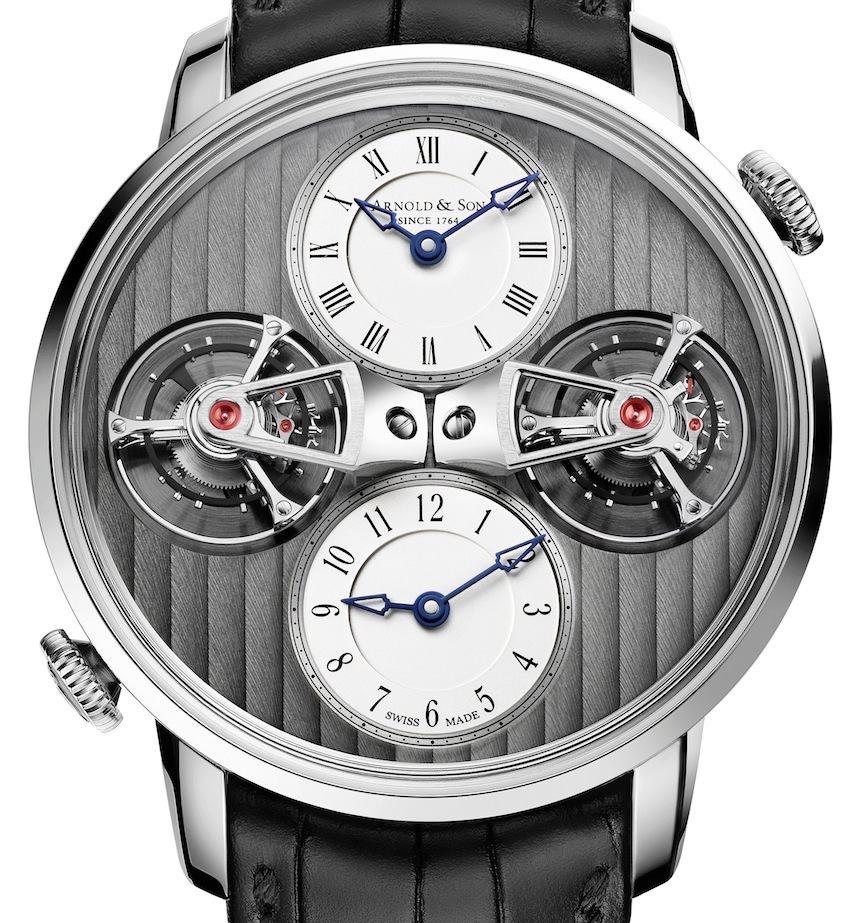 Stylistically speaking, this is one of my favorite watches to hit the market this year – it’s a shame that there are only going to be 28 of them! I love the symmetry of the dial, the luxuriousness of the 18k gold tourbillon bridges, the synchronized dance of the twin-tourbillons, and the NAC gray-coated face, finished with Geneva stripes. Aesthetically, this watch brings to mind one of my all time favorites, the MB&F Legacy Machine 1 (hands-on here), which, incidentally, also has two independent time indications, albeit governed by one single escapement. The Arnold & Son DTE Double Tourbillon Escapement Dual Time does add two tourbillons, transforming itself it into more of an horological heavyweight (not that the LM1 would be anything but a marvel of modern horology). It’s no longer a new thing to display a tourbillon on the dial, but it does seem to be a sensible place to put it if your watch contains one. They are so interesting to look at. Even if you forget what it’s there for, it still looks really, really cool. And two is always better than one, right?

Unfortunately, multiple tourbillons come at a price. This is a limited run, and there will only be 28 of this Arnold & Son DTE Double Tourbillon Escapement Dual Time model available, each one with a price tag of $218,865. In my opinion, the Arnold & Son DTE Double Tourbillon Escapement Dual Time is a beautiful watch and one I would love to have on my wrist. It handles its size with grace, and that vertical symmetry is a treat! Alas, such class does not come cheap, but if you do have the money (or a very rich, generous friend) it’s not a bad thing to spend it on. arnoldandson.com