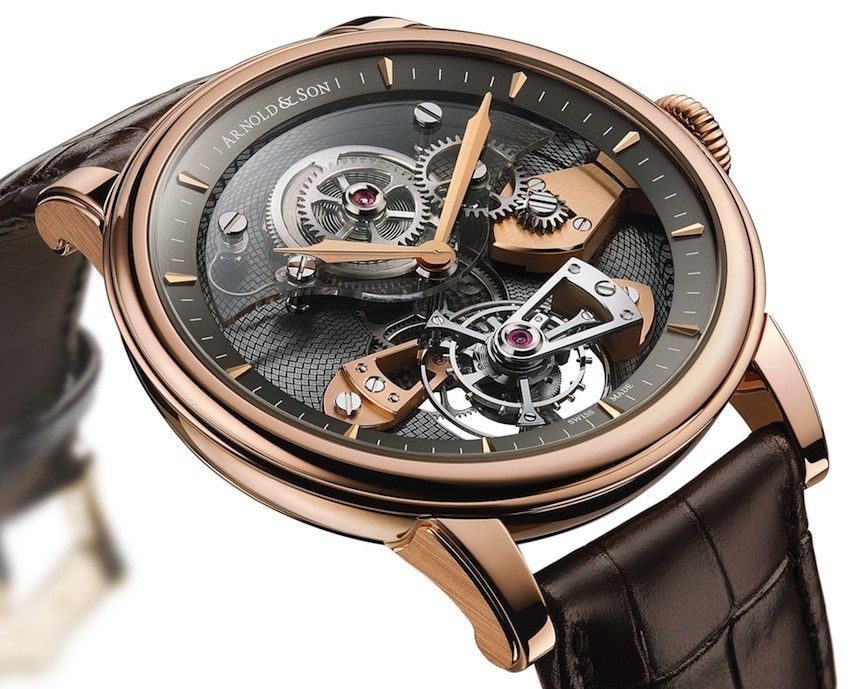 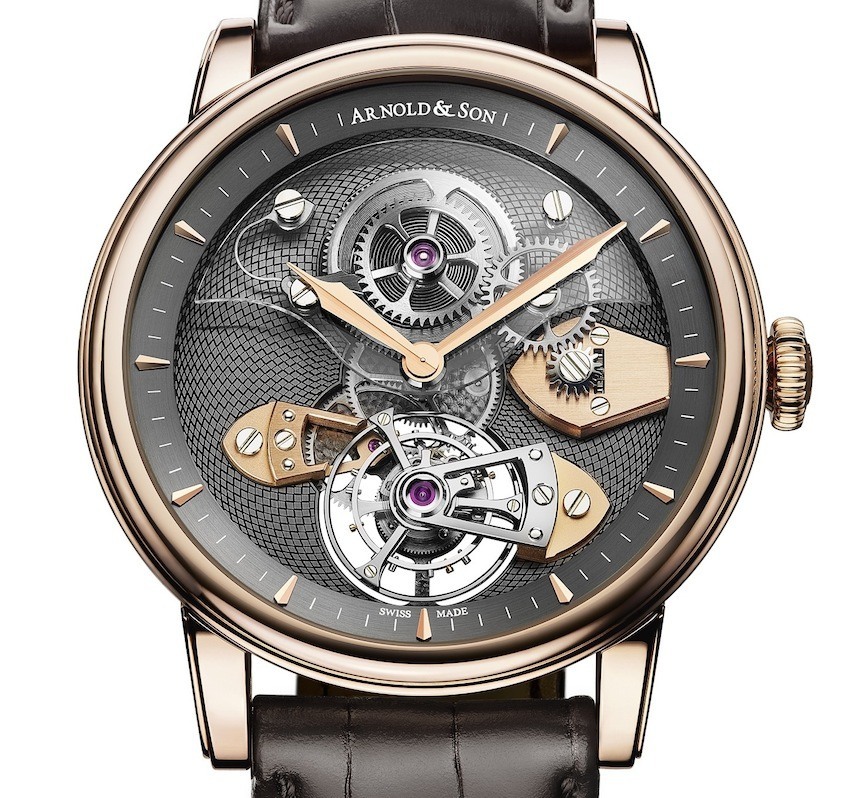 We have said this before and will say it again: the tourbillon, as visually arresting and technically challenging of a complication as it is, over the course of the last decade or so, has become more and more widely available, with just about any and all higher-end brands featuring it in their portfolios. The Arnold & Son Royal TES Tourbillon manages to spice things up just enough to render the “whirlwind” in watchmaking more refreshing and fascinating, all the while leaving this over 2-century-old invention nearly perfectly intact.

So how does Arnold & Son’s achievement justify this potentially controversial assertion? First, let’s see where the Arnold & Son Royal TES Tourbillon watch remains business as usual. As far as actual performance is concerned, this 2014 novelty features the more ubiquitous 1-minute tourbillon, in this case, operating at 3 Hertz, or 21,600 vibrations per hour. And while that is slightly above the 18 thousand beats per hour standard of tourbillons, this negligible increase in speed is nothing to write home about. In other words, no crazily slow or fast speed, additional axes or other sci-fi-worthy twists to be marveled at here. What makes the Arnold & Son Royal TES Tourbillon watch more unique, therefore, is not its actual performance but rather its unique looks: basically, the entire movement looks as though it was installed the wrong way up, meaning that most “internals” usually facing the case back side of the watch are now situated on the dial side. And when we say visible, we mean a splendid view that is available for the wearer any time he or she chooses to glance at the watch.

On the image just above you see both sides of the movement, with the case-back view of it being to the left, while the dial-side of the A&S8100 caliber is to the right – exactly the other way around from what you would expect. And while this is not the first time we meet the concept of the “inside-out movement,” where Arnold & Son takes this (nearly) X-rated exhibition of watchmaking goodness a step further is by placing a large sapphire crystal bridge over most of the upper half of the movement.

This sapphire bridge not only secures the mainspring and the center wheel, but also lends a “floating” look to the movement. Having handled a few pieces from other brands with sapphire elements in their movements (like the Ulysse Nardin 4-Gong Sapphire Tourbillon or the Maitres du Temps Chapter One Round transparence), the real treat of this scarcely used component is that unless it reflects some direct light source, it tends to become practically invisible, genuinely fooling the observers’ eyes into seeing the movement’s parts as if they were floating weightlessly. 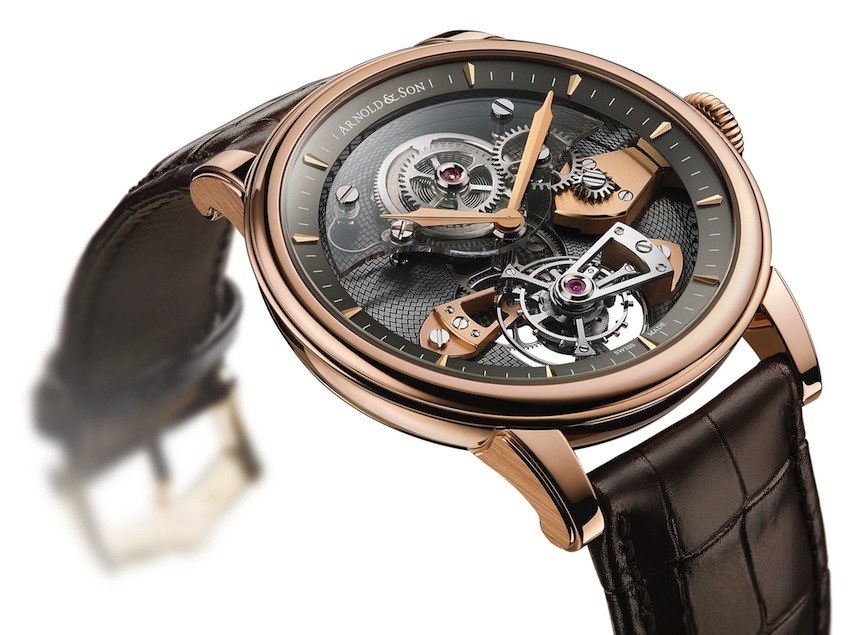 Touching on a somewhat more practical issue, the in-house movement packs an ample 80 hours of power reserve and, thanks to the inclusion of the sapphire bridge over the mainspring, the spring and its coils are exposed, making for a more unusual – and certainly less accurate – indication for the power reserve. Furthermore, the movement is vertically aligned in a way that the center of the mainspring, the hands, and the tourbillon are all set on the same longitudinal axis.

It is this layout which provides plenty of space on both sides of the going train, spaces which Arnold & Son filled up with beautiful – and rather unusual-looking – guilloche engraving, which the brand claims to be inspired by a pattern found on the cases of antique pocket watches of the manufacture. It worked back then and it clearly works now, as this pattern lends an elegant and traditional mood to the otherwise modern-looking “NAC grey” nickel silver base plate of the movement. Speaking of the grey hue of the movement, it definitely creates a refined contrast with the 44 millimeters wide red gold case which, of course, is equipped with sapphire crystals on both the case back and the dial side. 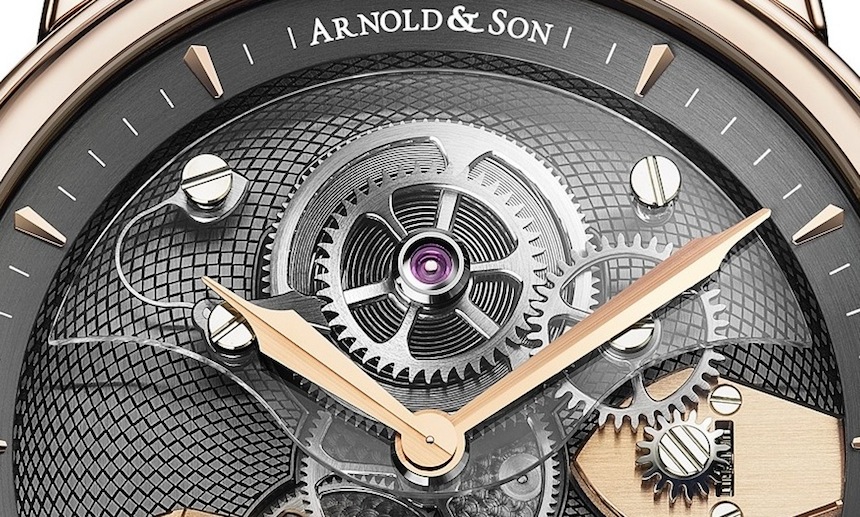