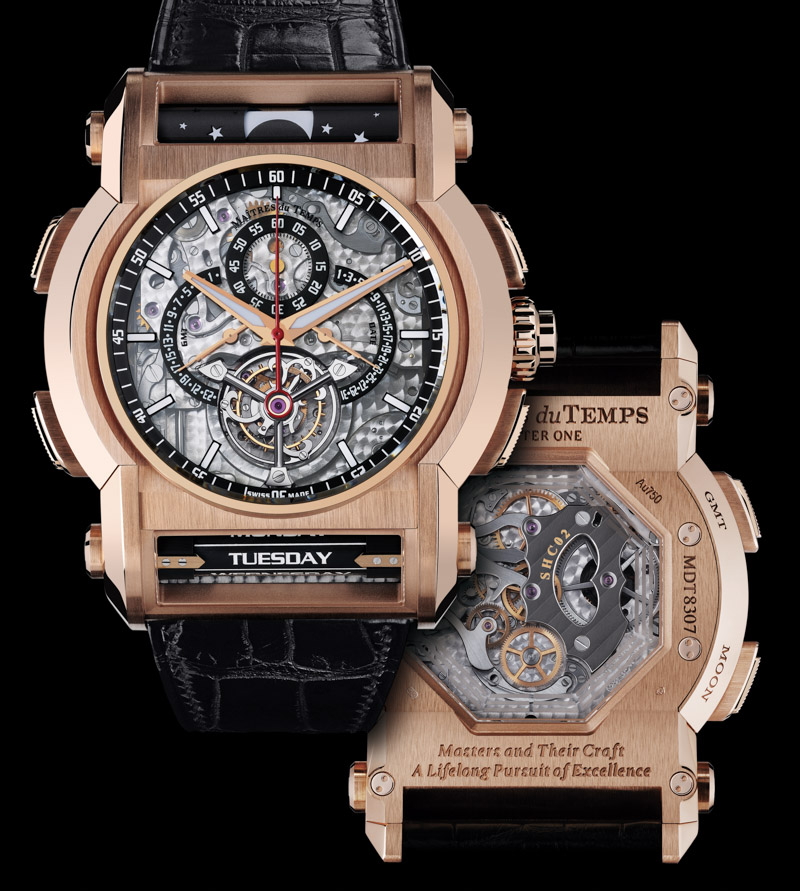 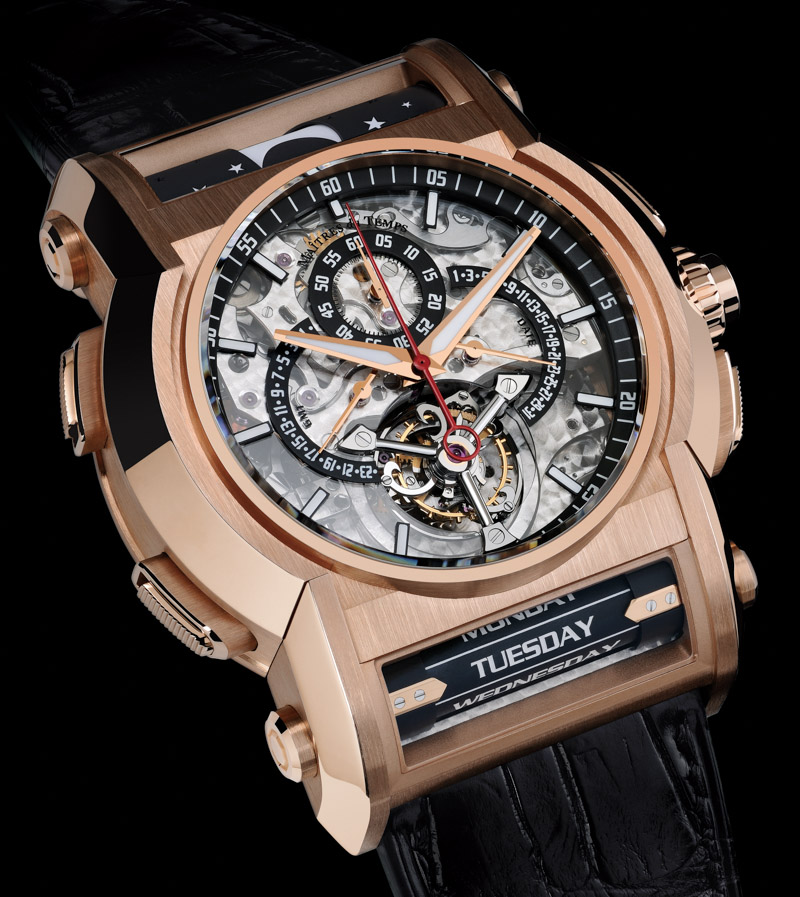 Steven Holtzman founded Maitres du Temps (i.e. Masters of Time) in 2005 to create a brand that enabled some of the most acknowledged individual watchmakers to overcome their own technical and aesthetic limitations and collectively develop timepieces that they never would have conceived on their own. So far, six master watchmakers have worked under the aegis of his initiative designing three different base models – or Chapters, as they like to call them. With the new ‘Chapter One Round Transparence’ the brand offers a new version of the original by giving us a different perspective on their very first movement.

Chapter One – unsurprisingly – is the watch with which it all began for the brand. To learn more about its not-so-basic details, take a look at what Ariel wrote about the piece back in 2008. In essence, Peter Speake-Marin and Christophe Claret collaborated with Roger Dubuis on developing a very unique offering, something that would mean a powerful, yet elegant starting point for Maitres du Temps. They created an extremely complex movement with a tourbillon, monopusher chronograph, date and GMT, as well as moon phase and day indicators displayed on special rollers placed between the lugs of the watch. All this was housed in a tonneau shaped case – probably the most brutal of its kind – with a width of 46 and a lug-to-lug size of 62 millimeters. 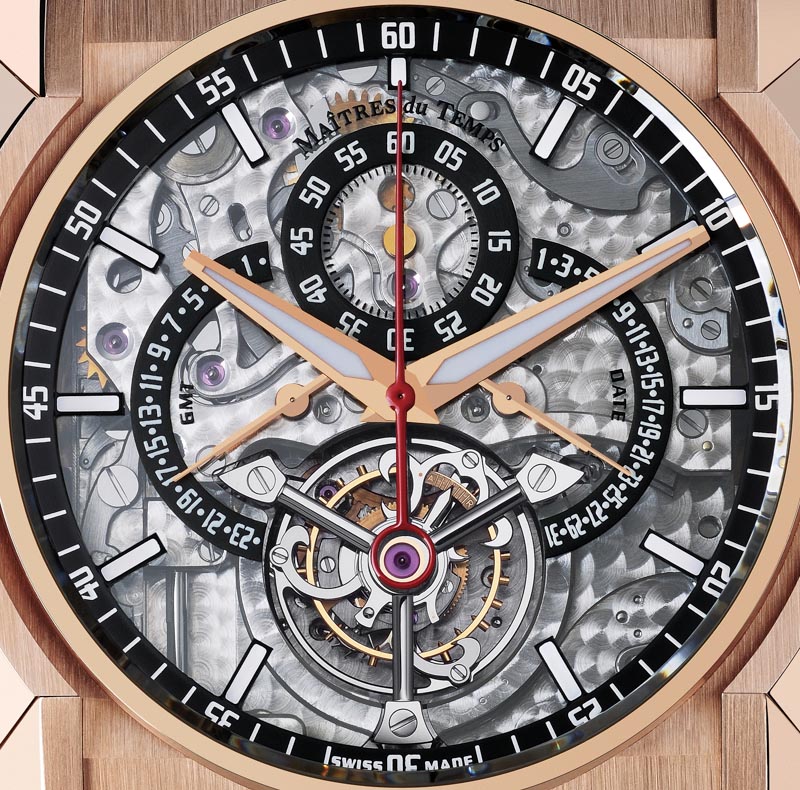 A few years later, despite the already immense size and complexity of the base model that was in a tonneau case, they set themselves the seemingly impossible challenge of installing that beast of a movement (measuring 51 by 32 millimeters all by itself) in a round case. In 2010 we could see the result of this, and the quite straightforward  ‘Chapter One Round’ was announced. Issued in red gold in a limited edition of only 11 pieces, it kept all the functions of the original watch but abandoned the rather intimidating looks by offering a somewhat more casual appearance. The watch we are looking at today is the first update to the Chapter One Round and it is implicatively titled Transparence given the skeletonized dial.

I must admit that upon reading the name ‘Transparence’ I unwittingly imagined a sapphire case or some other kind of see-through extravaganza; and so I had to look twice before I could see what was so “transparent” about it. Once I did though, I was comfortable with setting my previous expectations aside. Basically, what happened is that they replaced the solid black dial of the base round version with a perfectly transparent sapphire pane. Like most of the time, the result sounds simple enough, but the processes required to achieve it are more complicated. The finished dial is 0.4 millimeters thick – or rather: thin -, and it received more laser treatment than the poor planet of Alderaan as it got destroyed by Darth Vader’s Death Star. First the block of sapphire was laser-cut to perfection so as to provide an undistorted view, then openings were cut to accommodate the hands and the superbly crafted tourbillon with its cage and bridges, finally twenty tiny holes were laser-pierced into it to accept the ‘anchors’ of the indices. 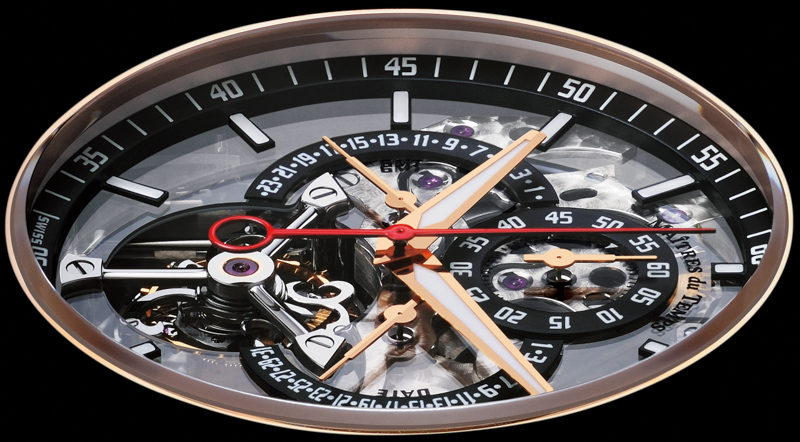 The result? With the round case, Maitres du Temps chose a slightly different direction in terms of styling and ended up with a look that I sense to be more organic and hence more likable than its predecessor. It got rid of the solemn Roman numerals and changed them for more up-to-date luminescent indexes and a minute track on the flange ring. Despite those changes though, it still wasn’t a completely new watch as it appeared to inherit much of the stern nature of the tonneau-shaped original.

By creating the see-through dial of the ‘Transparence’, they not only opened up the view onto the bespoke SHC02.1 caliber, but also lent the Chapter One concept a more contemporary appearance. It still is a very daring design, but for me it finally looks sufficiently modern and hence more of a complete package. Frankly, after being given the chance to take a look at the movement from this new perspective, it is difficult to understand why they didn’t go for this transparent look a lot earlier than this. Surely, most movements are not that interesting on the dial side but when it comes to such a staggering caliber – composed of 558 components and bridges with hand-beveled edges and beautiful perlage (circular graining) decorations – the idea of a solid black dial just seems wrong.

As I mentioned above, the brand has already written its third Chapter (with the Maitres du Temps Chapter Three Reveal) with a much more classical looking, but nonetheless stunning watch by Kari Voutilainen and Andreas Strehler. Having said that, I respect the fact that the brand decided to carry on with a previous model and aspire to further enhance it. This sentiment implies the tremendous scale of investment behind the concept – and it also shows that several versions have to be made to justify such an immense technical effort. But then again, buying into such a young brand is an investment as well – and a fairly expensive one at that: the price for one of the eleven pieces ever made of the Chapter One Round Transparence is $540,000. maitresdutemps.com