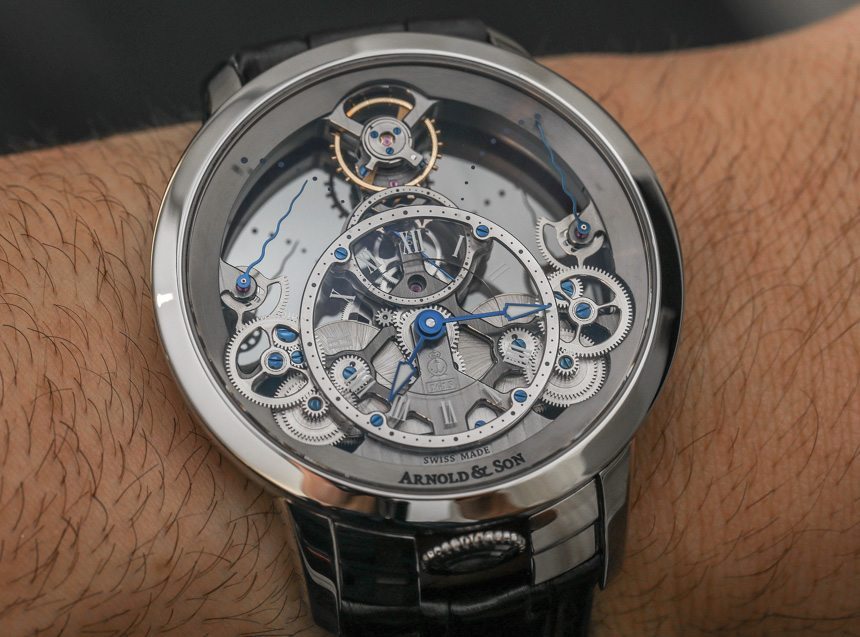 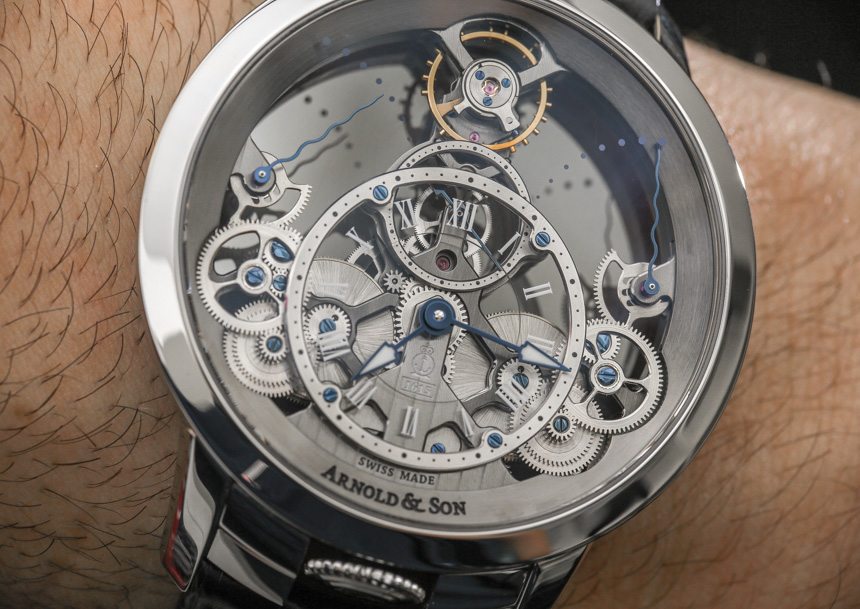 Would you like for me to remind you what the biggest issue is on watches with fully skeletonized dials and movements? It is that you can often see right through to your own skin and arm hair. Yes, those sexy-looking timepieces with skeletonized movements and dials can seem amazing in theory (and pictured alone), but place them on your wrist in a real world scenario and only those people with the most beautiful of wrists will have no reason to complain at all. This is actually a common “thing” which watch lovers can and do complain about.

So, to remedy this situation and respond to this concern, Arnold & Son has done a little experiment with this new version of their Time Pyramid watch in steel in the model reference 1TPAS.S01A.C124S “Translucent Back” version. This model will also outright replace the original version of the Arnold & Son Time Pyramid in steel with the traditionally transparent front and rear sapphire crystal. 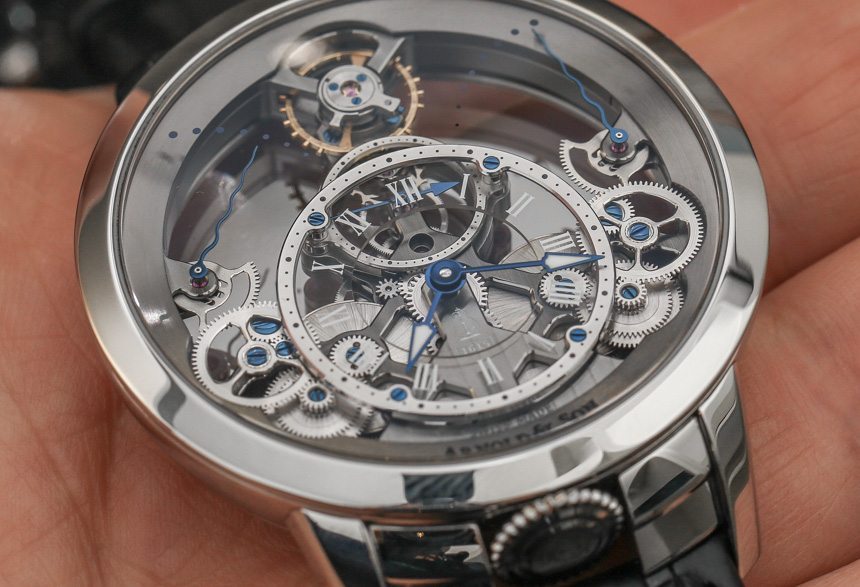 Arnold & Son did an amazing job with this watch but gave it no special name – that was rather lazy. “Time Pyramid Translucent Back” is the name that I am giving it whereas the closest thing Arnold & Son gets to a unique name (aside from the reference number) is “Time Pyramid Translucent-Grey Coated Sapphire Case Back.” Ugh… Anyways, even without a proper title, the watch is still exactly what you want since the caseback is really just one-way mirror material. 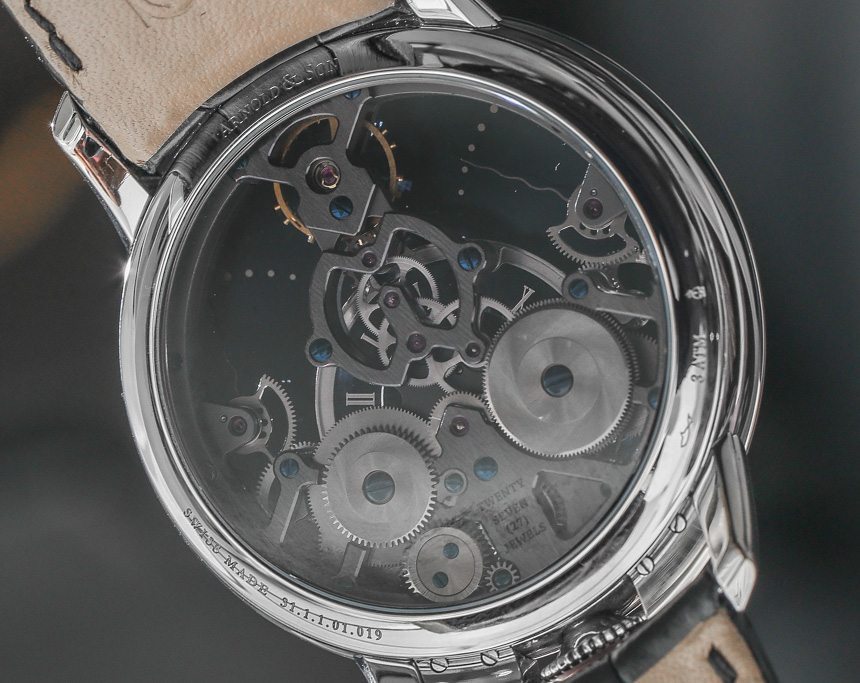 That means that from the front of the watch looking at the caseback you see a dark reflection and no view of your sickly arm hair. From the back of the watch, you can see right through to the other side. So compare this steel “Translucent Back” version of the Arnold & Son Time Pyramid with the first version that has the totally clear sapphire crystal caseback that I went hands-on with here. And yes, this “updated” version costs a bit more, of course. How much will this specially tinted sapphire crystal caseback cost you? About $2,000. It does seem a bit steep after the original version in steel was released less than a year before. 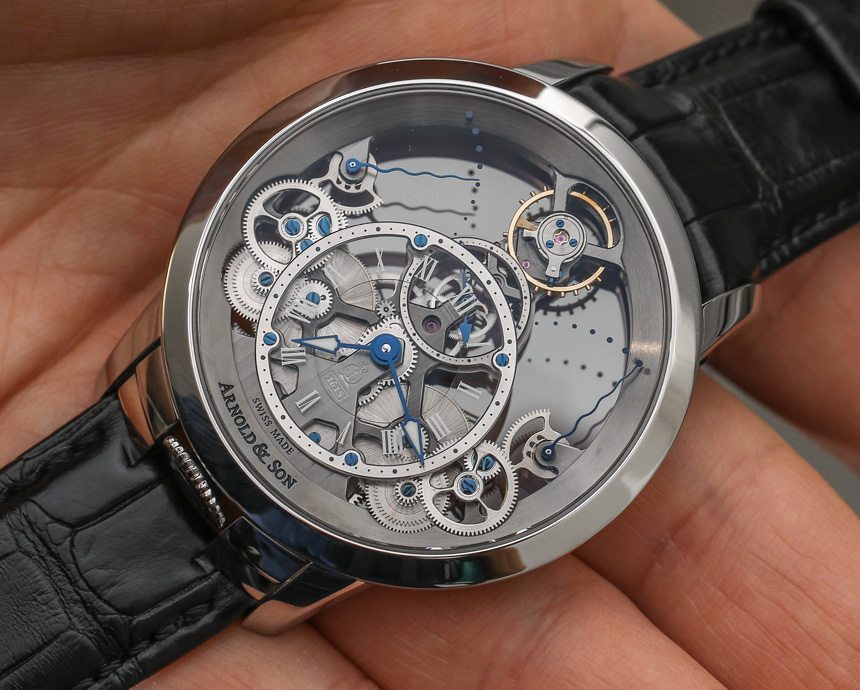 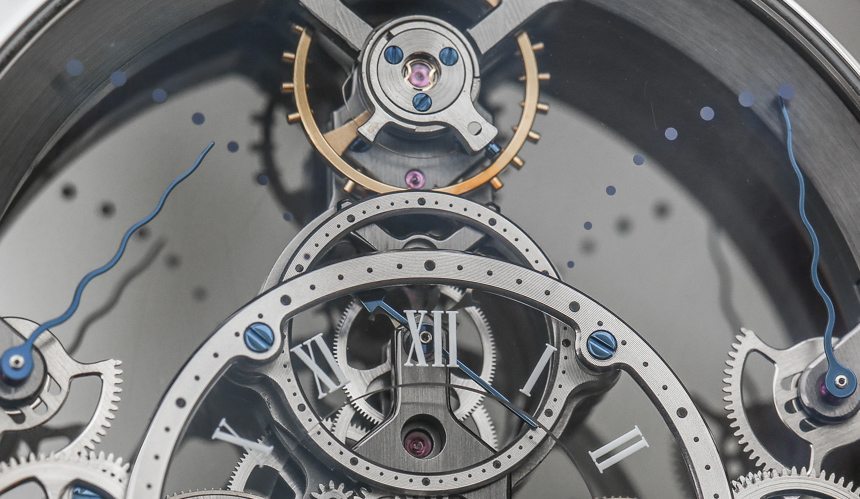 The Arnold & Son Time Pyramid watch originally came out in 2013, and in 2014 I reviewed the 18k rose gold version of the Time Pyramid on aBlogtoWatch here. This is still one of my favorite watches produced by Arnold & Son today because of its unique design, attractively symmetrical movement, and fantastic wrist presence. The case is 44.6mm wide (water resistant to just 30 meters) and produced with a crown at 6 o’clock thanks to the design of the movement. That also gives the case a more streamlined look thanks to the symmetry you get with the crown position. 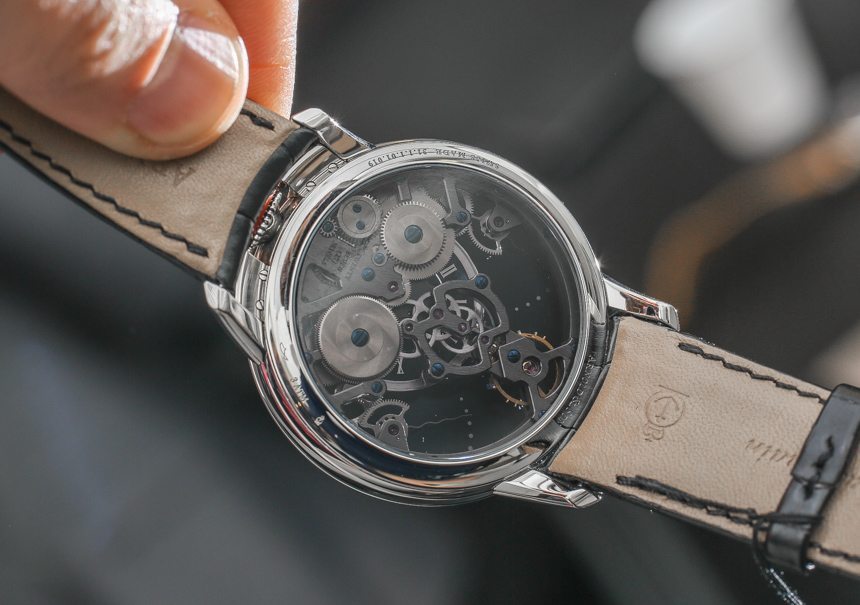 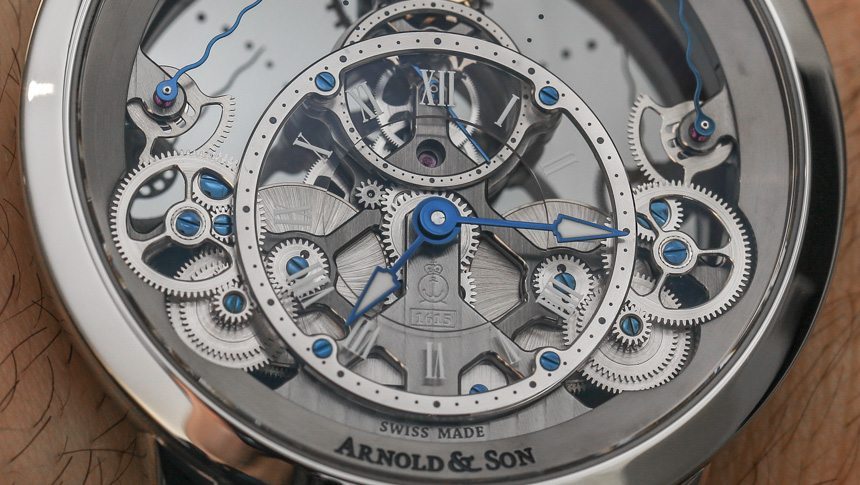 This article is literally the 5th or 6th time that I’ve written about the Arnold & Son Time Pyramid, so for regular readers, my apologies for repeating myself. With these sexy images of the Arnold & Son Time Pyramid Steel Translucent Back I couldn’t help but dive into the watch again. In addition to the benefit of the specially colored sapphire crystal caseback on this model, I think that the same approach can (and should) be used on other skeletonized dial and movement watches. It actually becomes a real issue to inhibit the beauty of a fully skeletonized design with the reality that when people wear these watches they don’t really want to stare at their own skin through the dial. 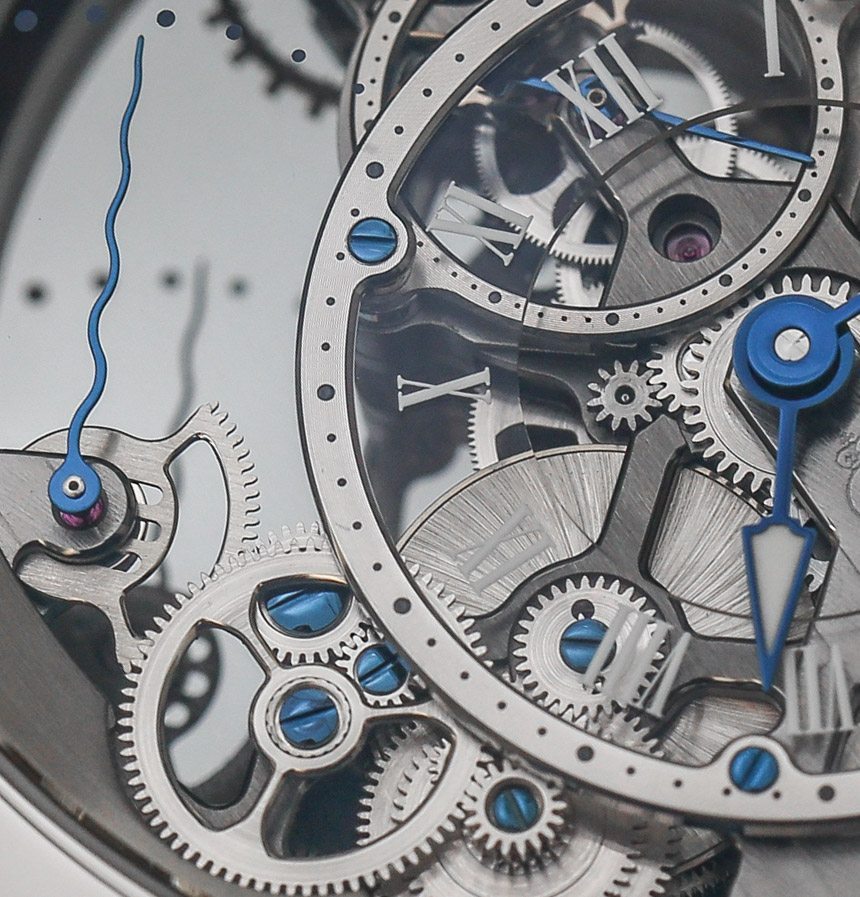 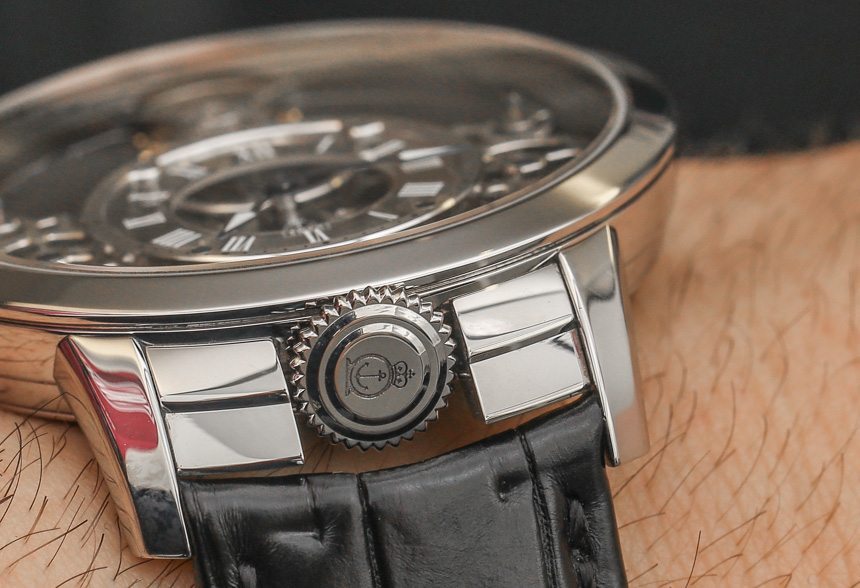 Inside the Arnold & Son Time Pyramid is the brand’s in-house-made caliber A&S1615 manually wound mechanical movement that I continue to love. It isn’t just that the movement is designed to look cool – though it is – but rather that the movement has some interesting mechanical features to boot. For instance, the double power reserve indicators are part of a system that uses two mainspring barrels for a quasi-constant force mechanism. The idea is that a primary mainspring barrel is used until it mostly winds down. At that point, the power coming from it is too unreliable to power the gear train for accurate timekeeping. So, then the secondary mainspring barrel kicks in to ensure the most constant power in order that the A&S1615 movement is more accurate across its 90 hours of power reserve. 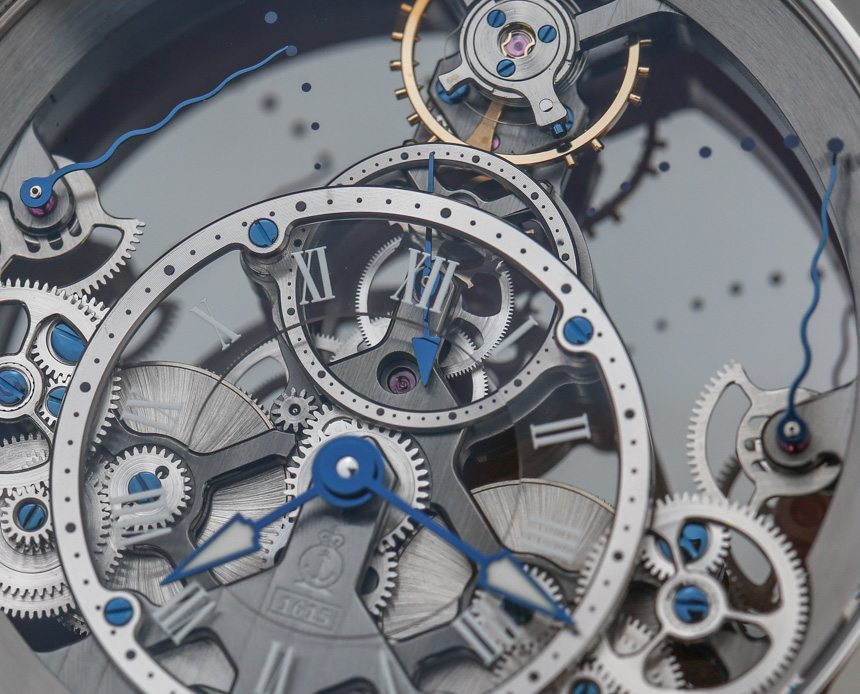 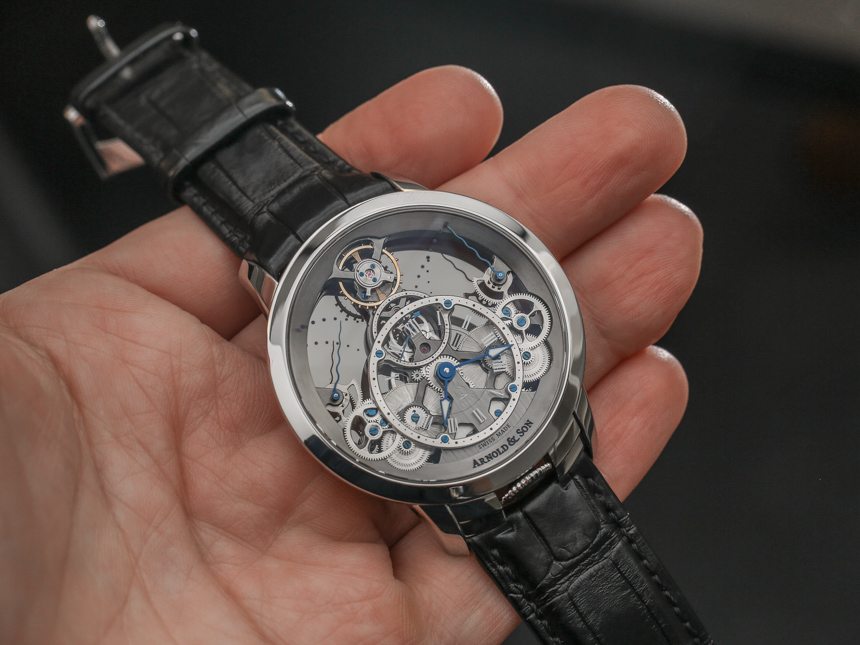 The movement is just 4.4mm thick and operates at 3Hz (21,600bph) and indicates the time in a subdial with the seconds in a lower, smaller subsidiary dial. For the steel version of the Time Pyramid, Arnold & Son coats much of the movement bridges in “NAC Gray” for the darker look which contrasts nicely with the blue tones of the hands and screws as well as the lighter silver-colored gears and wheels. Don’t miss all the hand-decoration such as the chamfered and polished bridges. The overall look is very nice, and with the new style of sapphire crystal caseback the entire presentation of the Arnold & Son Time Pyramid steel is better than ever.

With the hand-stitched black alligator strap, this Arnold & Son Time Pyramid Translucent Back watch looks fantastic on the wrist, especially because of how much of your own wrist you can’t see. The added element of treating the sapphire crystal caseback is minor but really effective, and I can’t really see people wanting to go back to totally clear sapphire crystals on fully skeletonized dial watches (unless they are working on very interesting wrist tans). Price for this reference 1TPAS.S01A.C124S Arnold & Son Time Pyramid watch is $31,900. arnoldandson.com