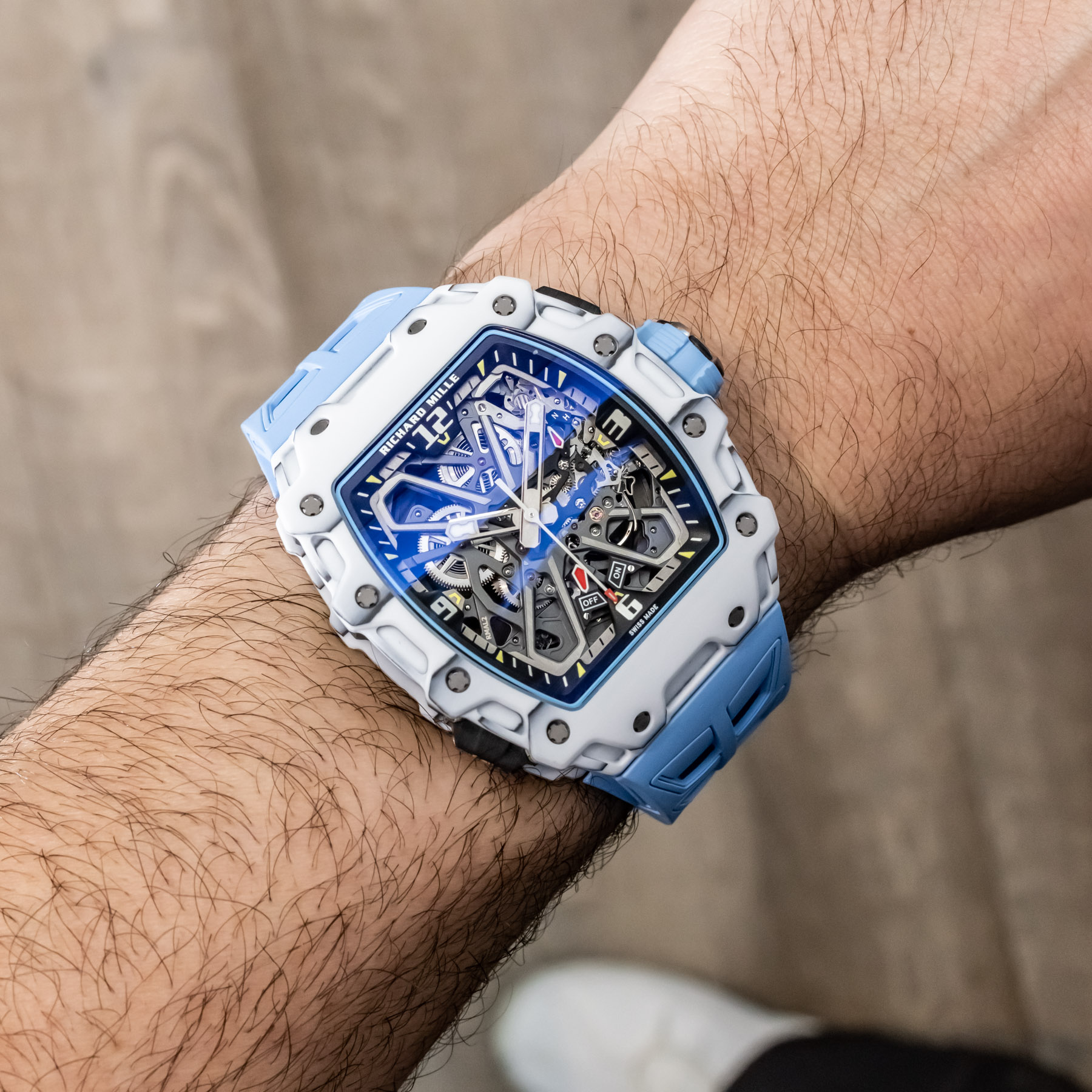 The latest installment in Richard Mille’s ongoing series of luxury sports watches in honor of brand ambassador Rafael Nadal is the beautiful new Richard Mille RM 35-03 Rafael Nadal Automatic, which comes in two color variants and was originally debuted on aBlogtoWatch here. Today I go hands-on with the white-cased version that comes with a fun baby-blue rubber strap. The watches are not a limited edition, but like all Richard Mille watches, they are limited in production and challenging to get nowadays due to popular demand (event at these ultra-luxury prices). In addition to sporting some interesting new dial design elements, the RM 35-03 is the first Richard Mille watch to contain the new RMAL2 automatic movement that has a system that adjusts the geometry at the push of a button. What’s that all about? 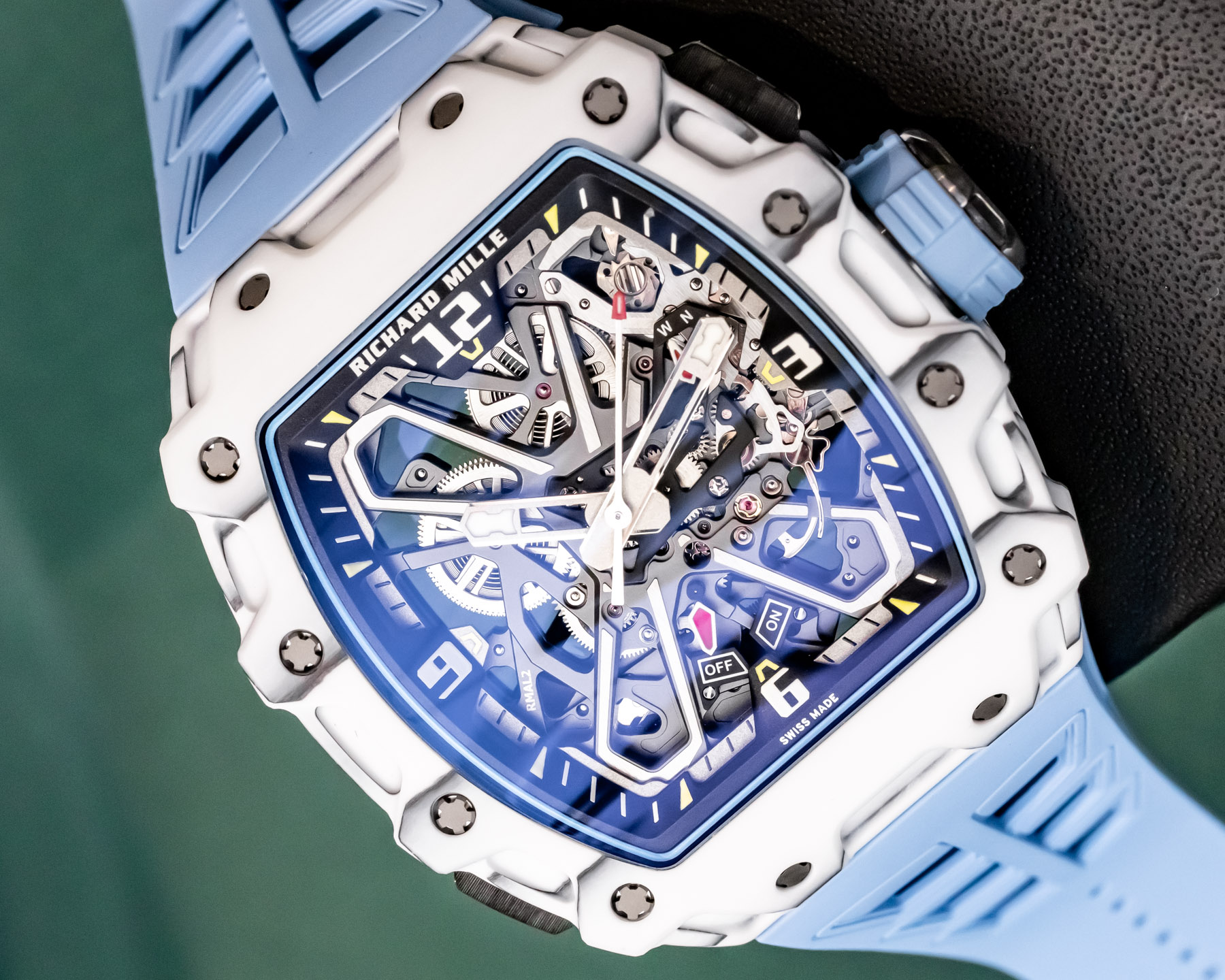 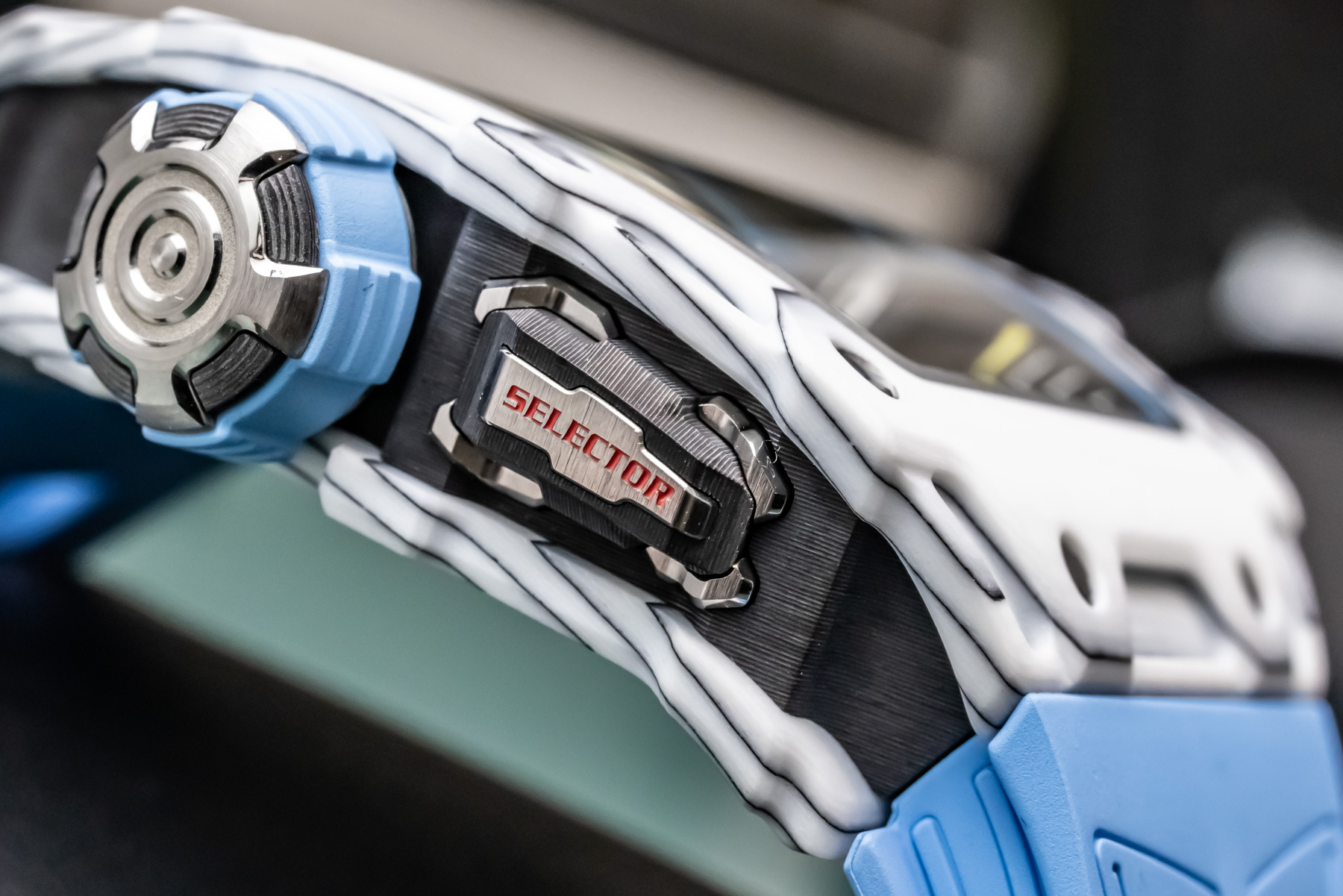 Adjustable rotor geometry is nothing new at Richard Mille, but this is a much more advanced form of it. For a while now, many automatic watches from Richard Mille had an automatic rotor that had adjustable “blades” that affected the rotor’s center of gravity. The idea is that in order to prevent too much stress to the movement, people with low activity lifestyles would have the automatic winding system be more efficient (thus, less effort is needed to wind it), and people with more active lifestyles who swing their wrists around a lot would benefit more from a less efficient winding system that absorbs more gravity-created torque. 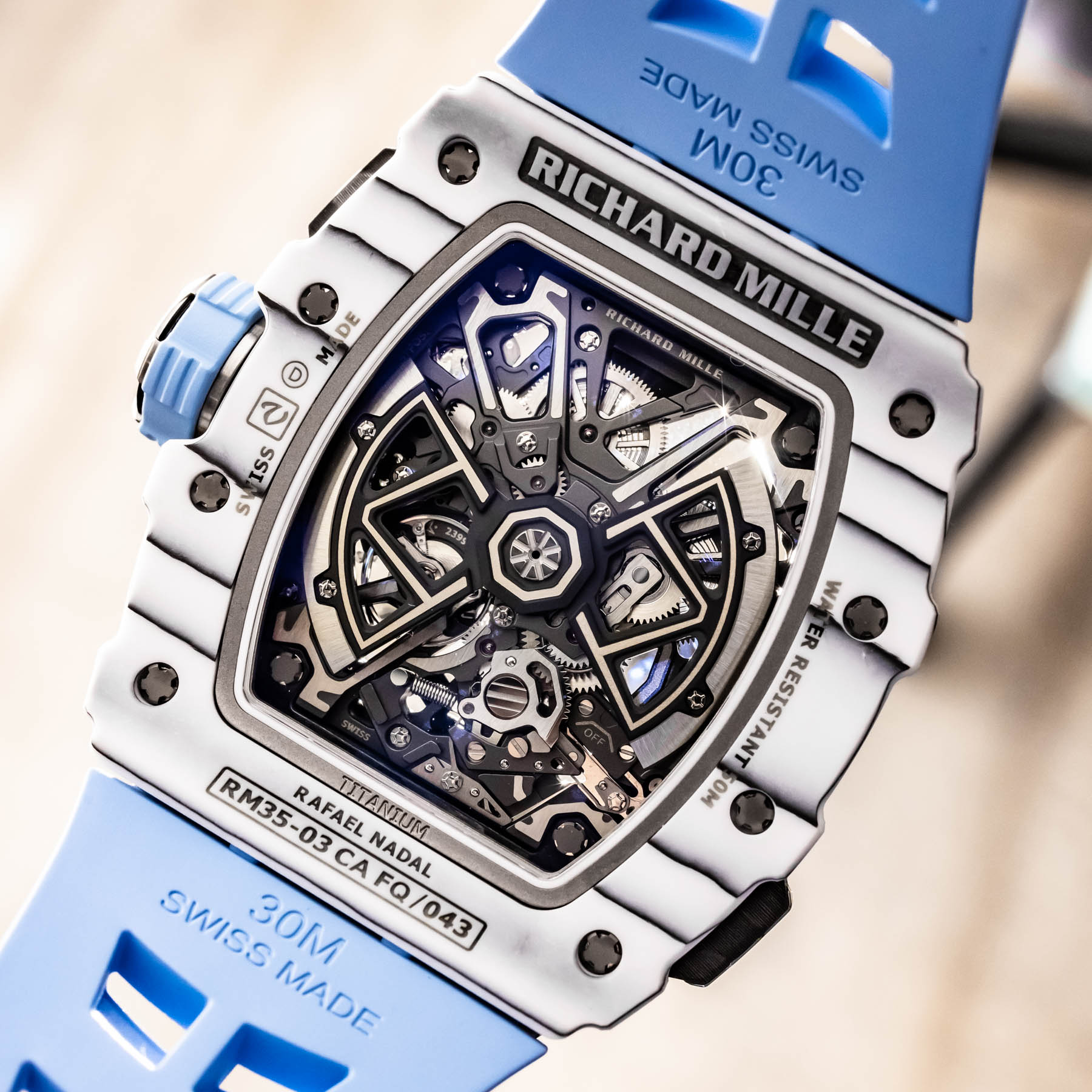 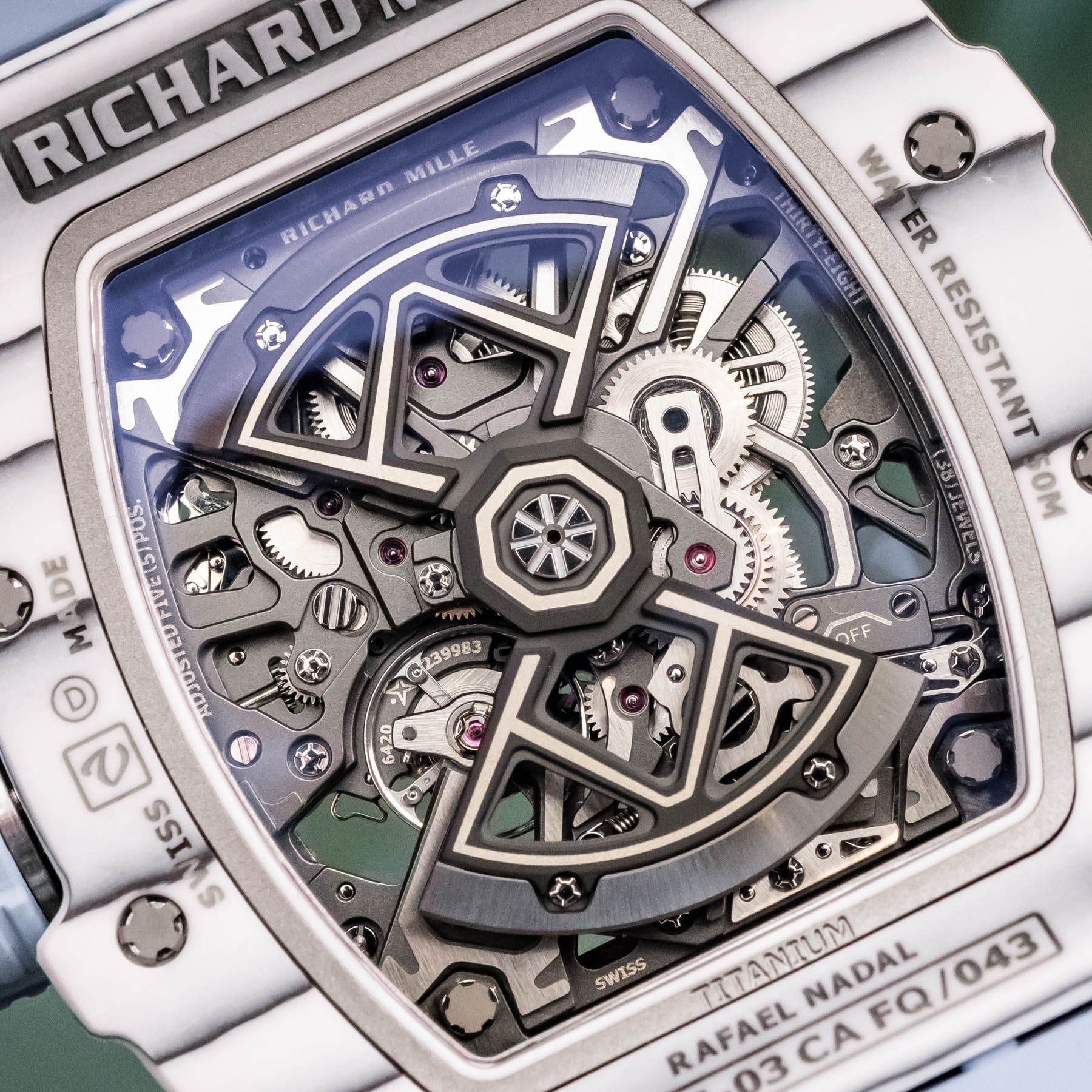 All of this can be done by adjusting the weight distribution of the automatic rotor itself. In previous Richard Mille automatic watches with this feature, the processes required the oversight of a watchmaker. The watch needed to be opened up and the automatic rotor adjusted by hand. No longer. Richard Mille’s RMAL2 movement features a “Sport Mode” pusher that adjusts the two-position automatic rotor shape (Richard Mille calls this the butterfly rotor system). One position is a more normal half-disc shape that offers the most winding efficiency and is thus ideal for most wearing scenarios. The “Sport Mode” position splits the rotor apart and forms the butterfly shape that more evenly distributes the weight. This puts the rotor into a state less likely to spin and, thus, put stress on the movement… if the wearer’s wrist does something like swing a golf club. The butterfly rotor system works as elegantly as promised, and also happens to be fun to play with. 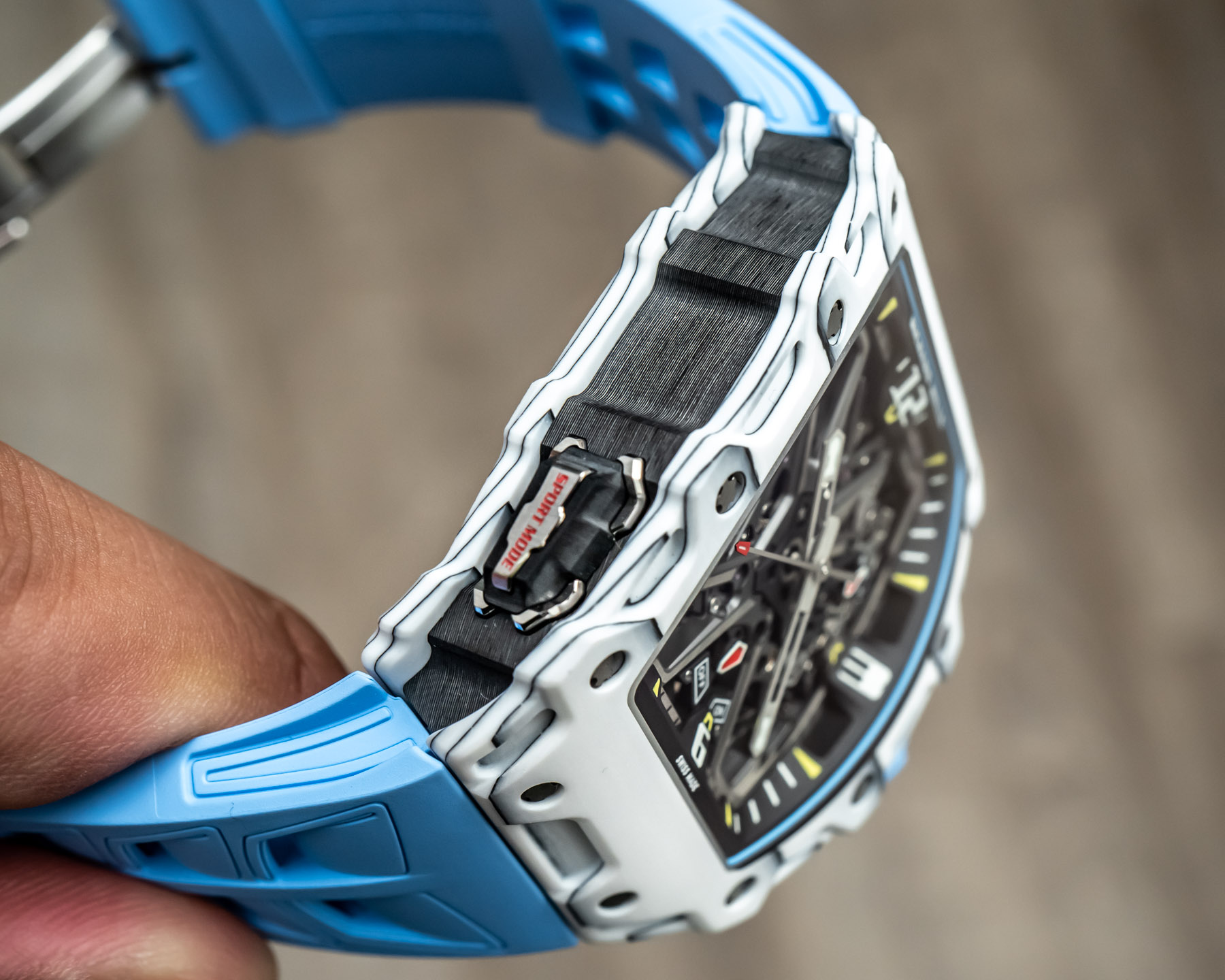 The Richard Mille RMAL2 automatic movement operates at 4Hz with about 55 hours of power reserve. It offers just the time with central seconds and has an additional pusher that acts as a function selector. Pressing it cycles the crown between adjusting the time, a neutral position, and winding the mainspring barrel. The movement also has a Sport Mode position indicator above 6 o’clock on the skeletonized dial. This isn’t my favorite Richard Mille dial, but the RM 35-03 does have a fresh look to it, and it maintains a decent level of legibility. Each of the two RM 35-03 case colors has slightly different dial color elements. 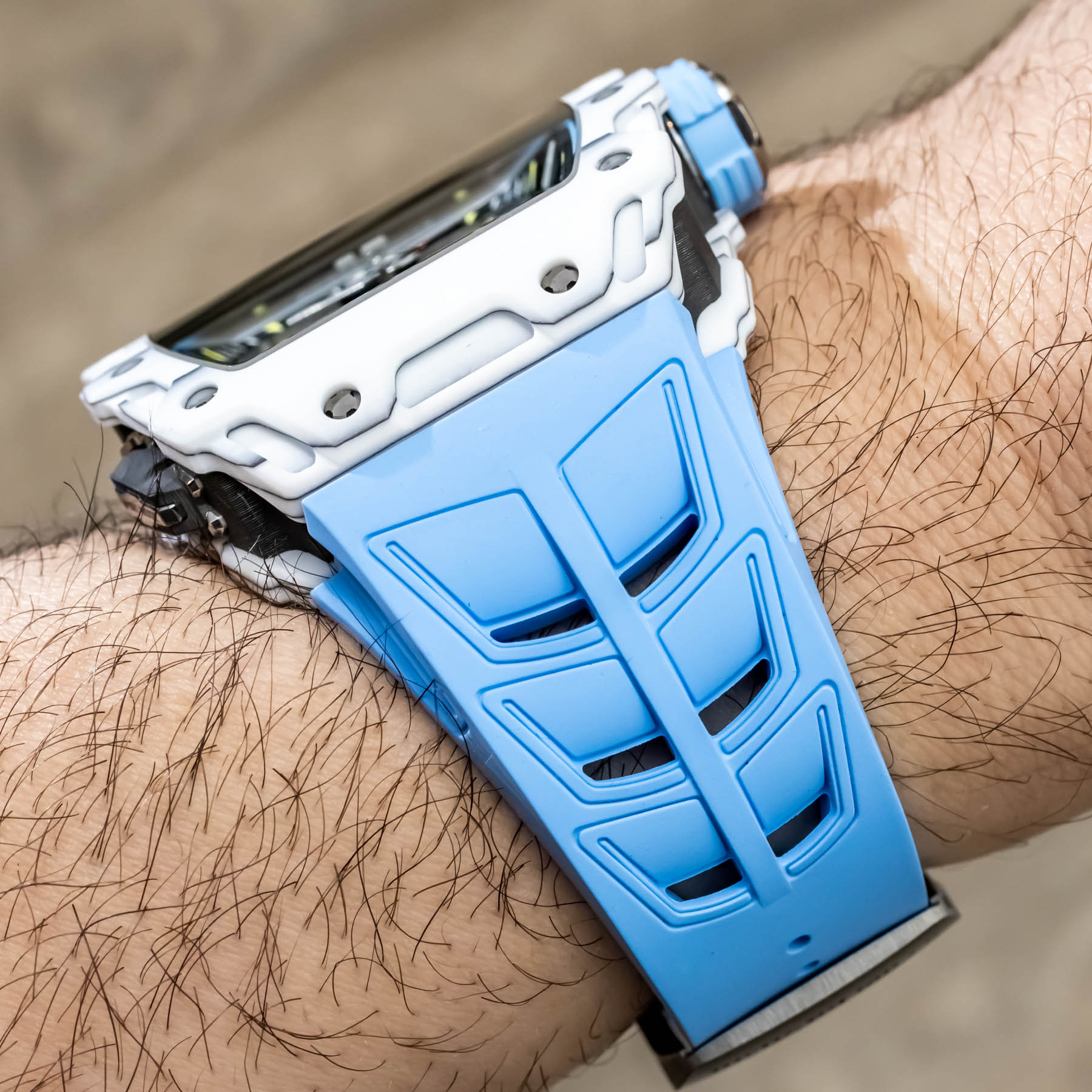 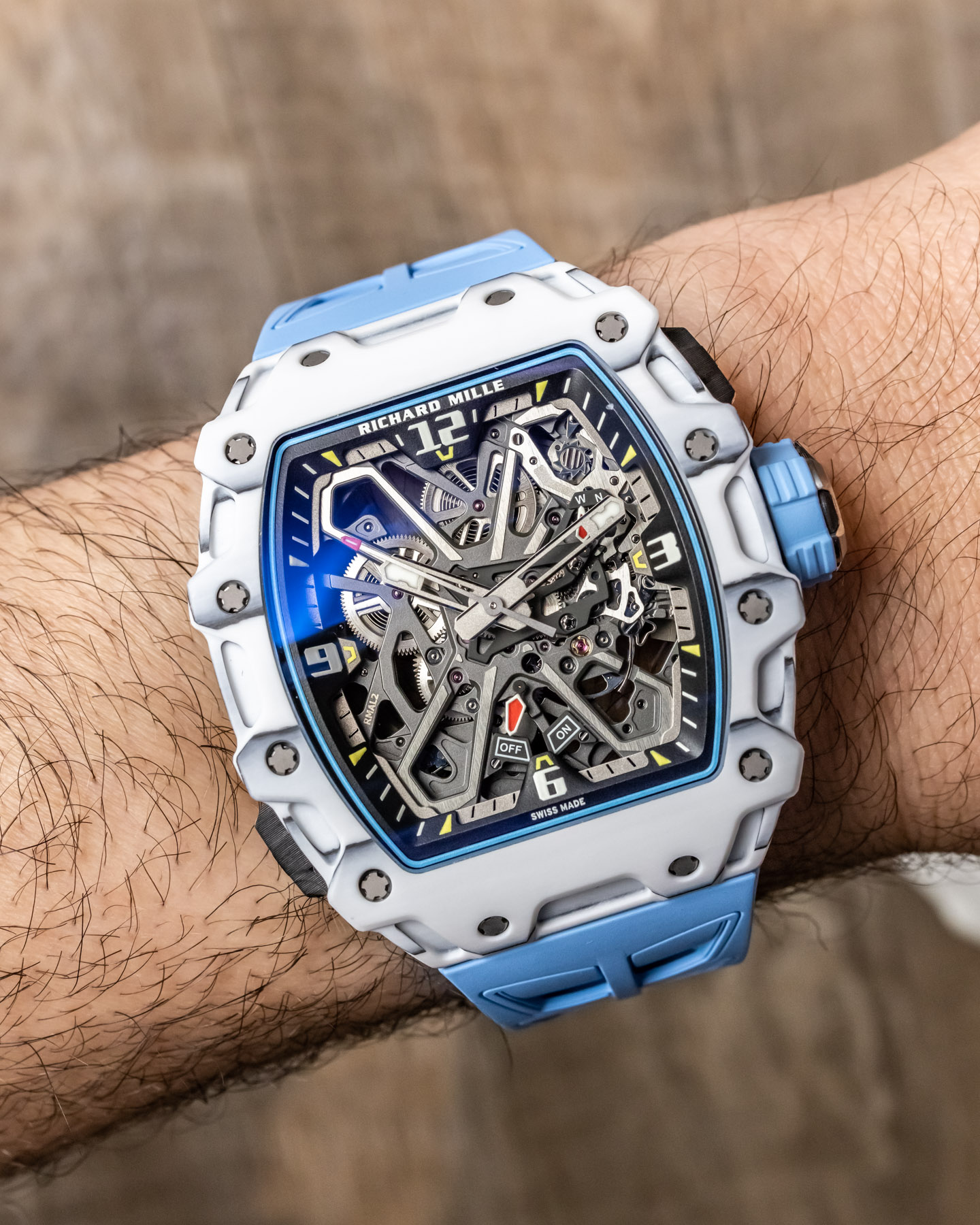 The cases are produced from various combinations of quartz TPT or carbon TPT materials that are layered and then carefully milled. One RM 35-03 has a white and black case, which I wear in this article. And it is joined by a mostly blue case version, as well, which you can view in our above-linked news article on the Richard Mille RM 35-03 Automatic Rafael Nadal. The tonneau-style cases are comfortable to wear and also use titanium parts, such as for the screws, pushers, and parts of the caseback. The case is 43.15mm-wide at its widest point, and while not a small watch, it does indeed wear very comfortably (as is the case with most Richard Mille timepieces) — though, as a sports watch, the 50 meters of water resistance means that the RM 35-03 isn’t ready for too much wet play. 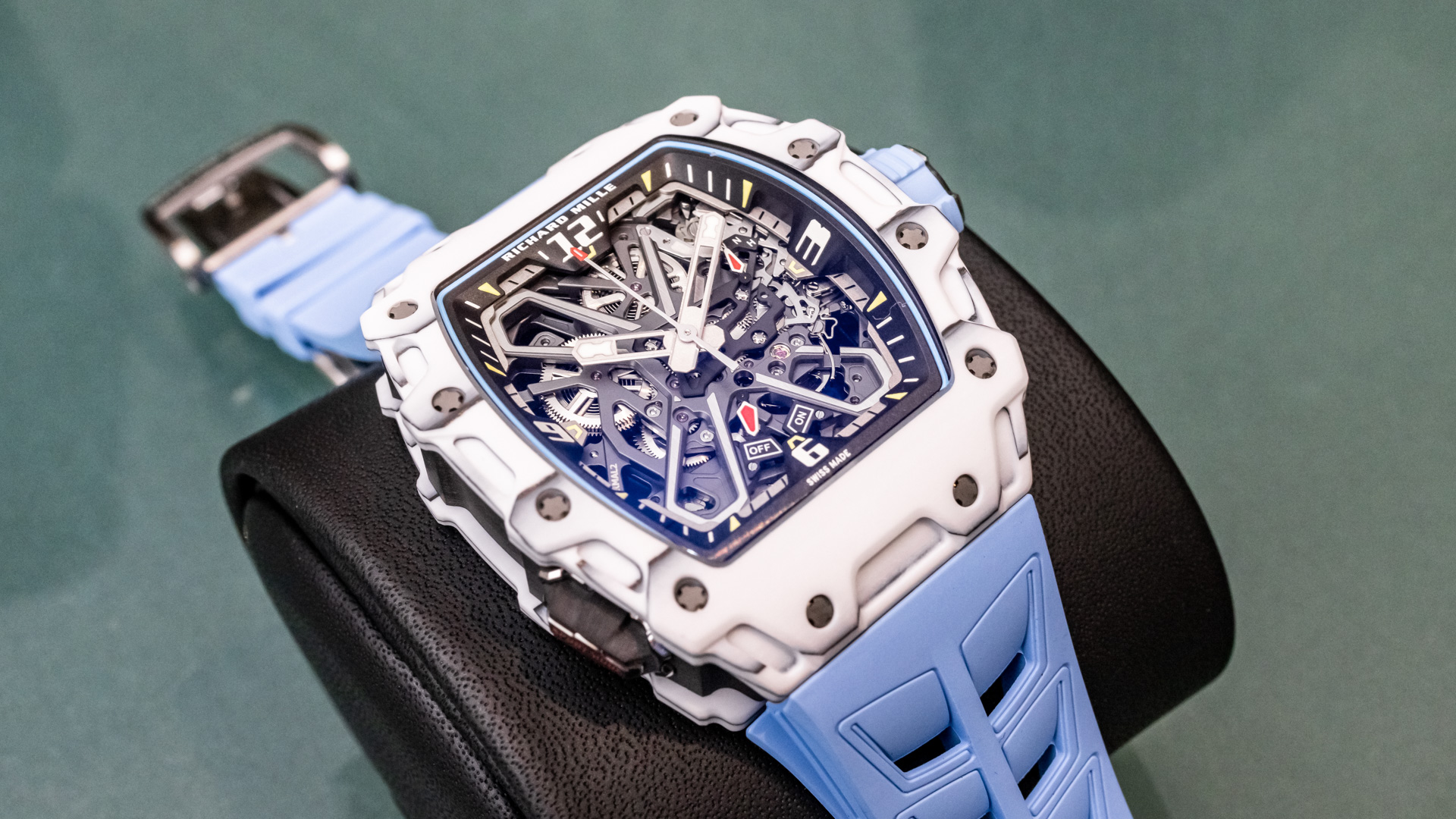 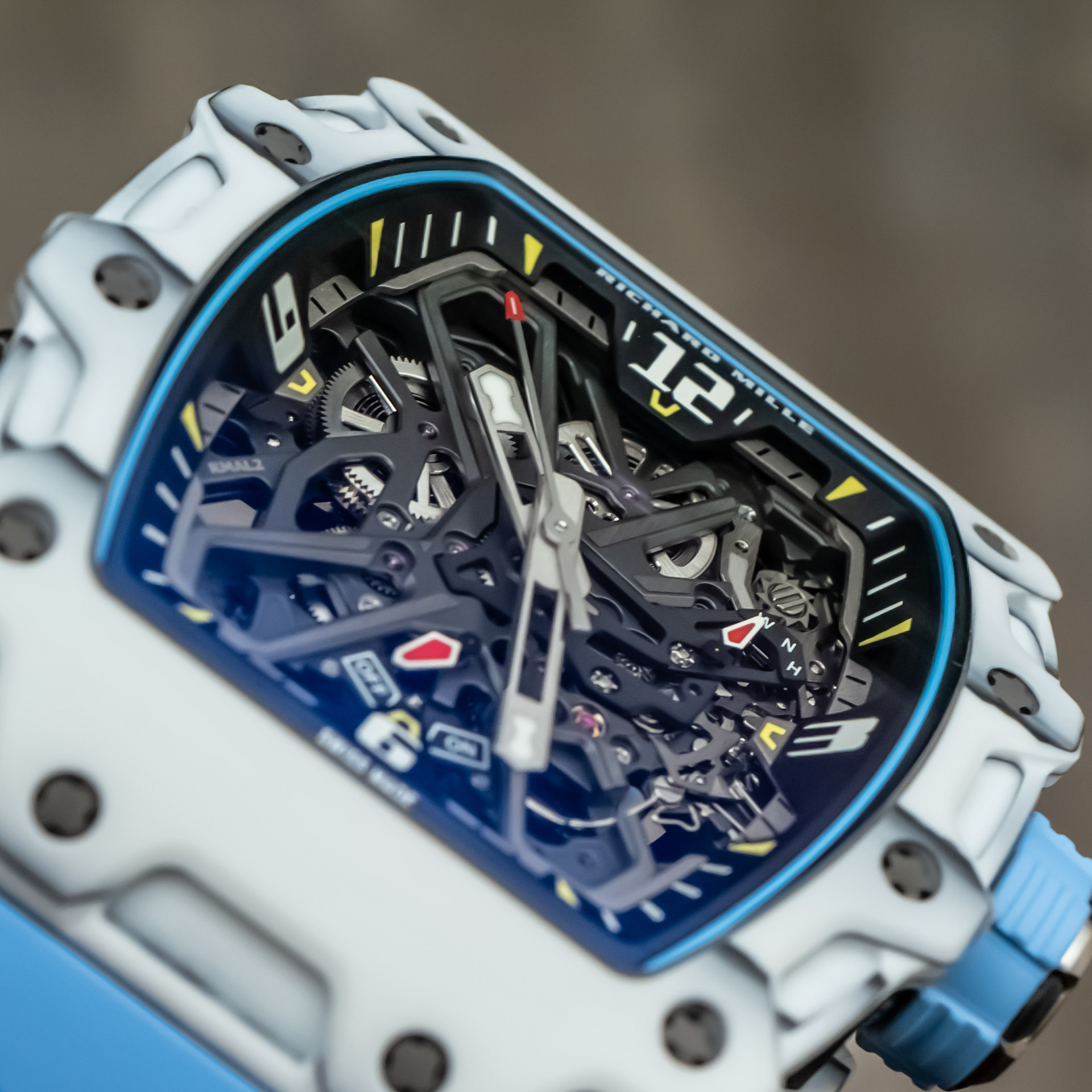 This particular case in white with black accents, and a layer cake of carbon and minerals, is particularly cool-looking, in my opinion. It reminds me of Japanese Gundam toy models I used to build as a kid. When painted correctly, the robot suit body armor had black-colored grooves that attractively contrasted against otherwise white surfaces. A lot of that effect is captured here in this unique case material that only Richard Mille offers, to the best of my knowledge.

I really admire the color curation and selection that Richard Mille chooses for many of its watches, these days. In the past, I have felt that color usage might have been a bit haphazard. More recently, Richard Mille has been doing a great job of making even its boldest-color watches harmonious (or at least interesting) from a color-combination standpoint. In this watch, we have a black and white case and dial mixed with bits of red and yellow. The light blue strap is matched with the rubber ring around the crown, as well as the color of the gasket upon which the sapphire crystal sits. 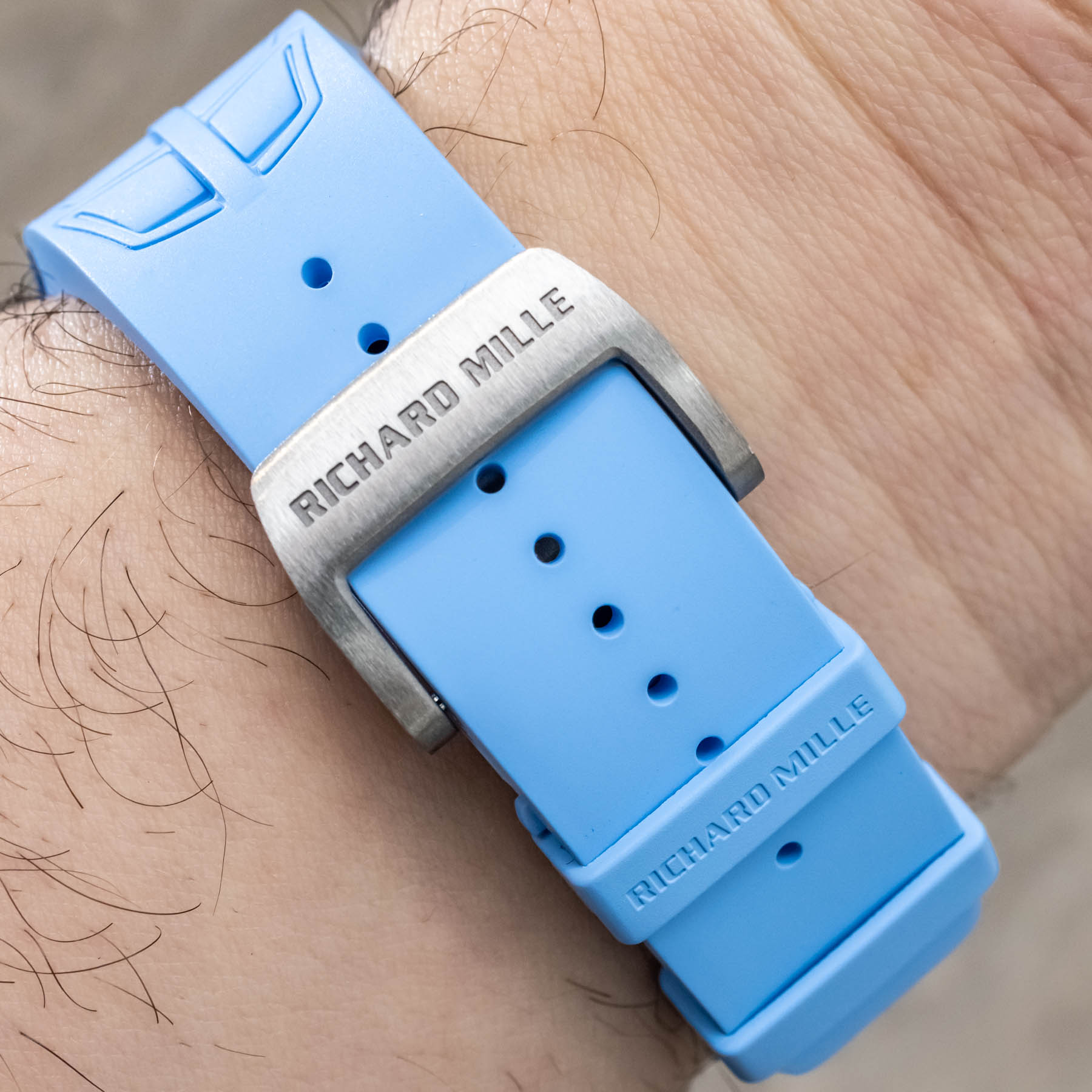 Speaking of strap, I found this high-quality rubber strap to be very neat-looking with its “race car vents” and pretty design. The strap is nicely integrated into the design of the case, and it comes together on a spring-loaded butterfly-style deployant clasp. Overall, the RM 35-03 is going to be another Richard Mille commercial success that is also going to be difficult to find in the marketplace. The RMAL2 automatic movement does actually does something new, which has arguable utility in at least some context. Where it lacks utility it offers fun, as this timepiece is yet another highly luxurious fidget instrument. Price for the Richard Mille RM 35-03 Automatic Rafael Nadal watch is $220,000 USD. Learn more at the Richard Mille website here.