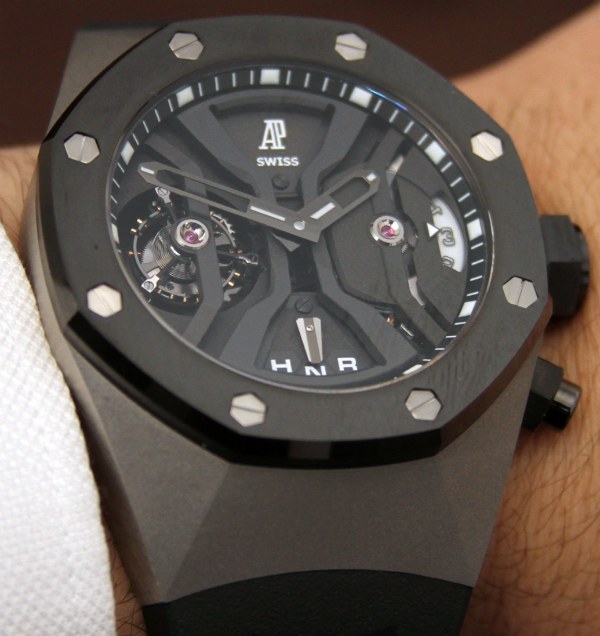 There are a few Royal Oak Concept watches. The first one came out in 2002 as a 30th anniversary model of the Royal Oak watch. Since then a handful of these watches were released in a few different versions. The most recent model was the Audemars Piguet Royal Oak Carbon Concept Tourbillon Chronograph. The case design has been consistent since the first Concept watch. What has changed are the materials and complications in the movement. The 2011 Royal Oak Concept Tourbillon GMT is one of the most simple versions, but very elegant in its design. It features the time, a tourbillon, and a GMT second time zone dial. At the bottom of the watch is a simple selection indicator for what the crown does (wind, adjust, neutral). The letter “H, N, R” represent the french words “Heures, Neutre, and Remontoir.” This is basically for adjusting the hours, a neutral position, and for winding the mainspring. 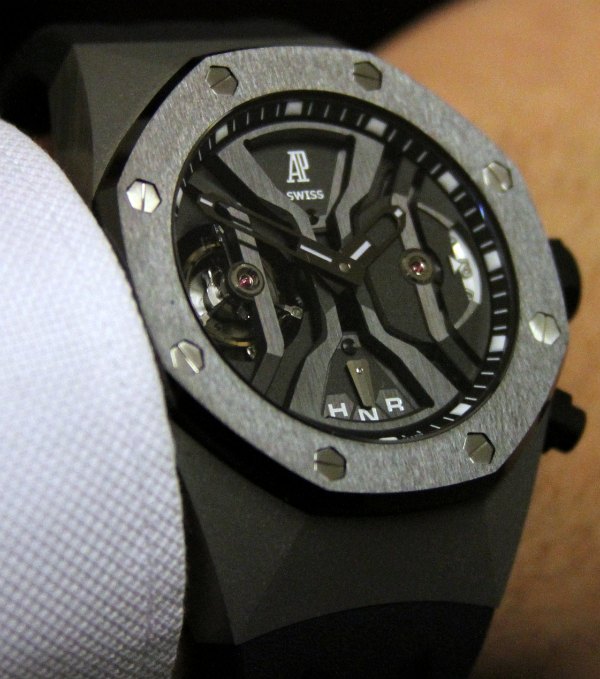 The Royal Oak Concept Tourbillon GMT hasn’t been officially announced by Audemars Piget yet – so I don’t have all the little details. The case should be 44mm wide. I believe it in a sandblasted titanium. The bezel is ceramic, with polished sides and a brushed top. Actually, the bezel was really hard to photograph. The camera flash caused the images to pick up all the grain in the brushed surface, but to the naked eye this texture is much more subtle.

You’ll also notice what appears to be ceramic bridges in the movement. While the last iteration of the Royal Oak Concept used Audemars Piguet’s forged carbon, this one emphasizes ceramic. This is also because ceramic (in various forms) will be a hot material in many AP watches for 2011 and beyond. The material is being coveted by AP and other brands due to its pristine look and wear resistance. Brands are also getting better at manufacturing ceramic – as it is known to be tricky in the construction phase. 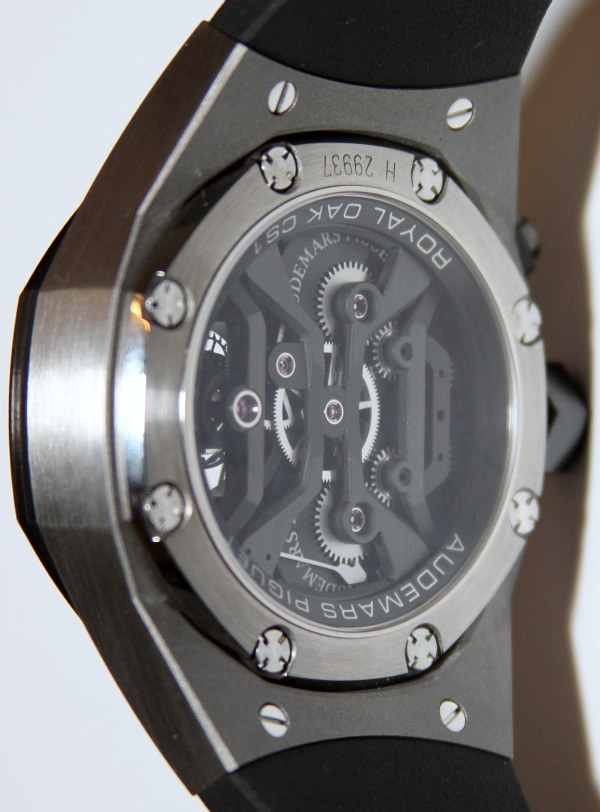 I believe that the crown and pusher is also in ceramic, which is pretty cool. The overall futuristic case design from 2002 still looks great, and I think it fits in with AP’s more toned-down look for 2011. Aside from new materials, the case isn’t radically different for the Tourbillon GMT model. What is very new is of course the movement – and I think is is one of the coolest looking ones to come out of the big houses this year. AP wanted to design the movement with as much symmetry as possible. They did a great job at with on both the front and back of the movement. The tourbillon carriage is open and easy to see, balanced by the GMT dial to the right of it. The mixture of steel and black elements in the movement mixed with the synthetic rubies is beautiful. The manually wound movement looks to have two mainspring barrels and should provide a very long power reserve. 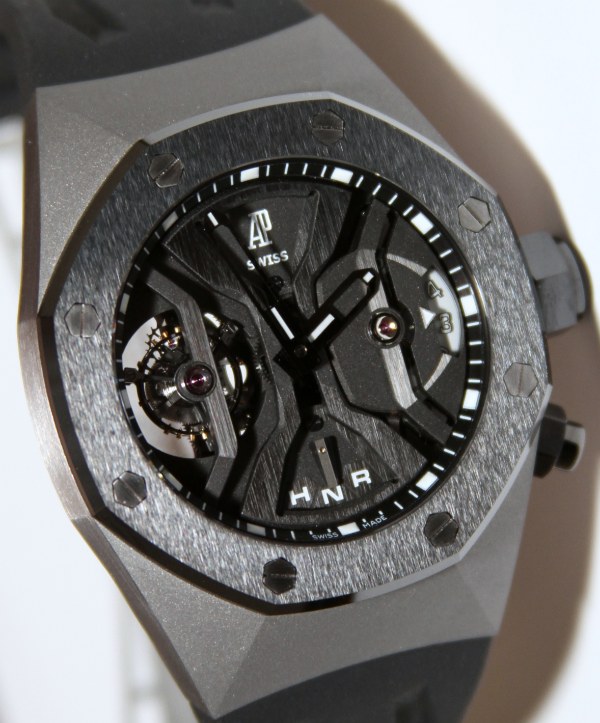 The pusher under the crown is used to adjust the GMT dial – which makes it very usable. In addition to luminant on the hands and the hour markers on the flange ring, the numerals on the GMT dial are also lume coated – which is nice. On the back of the watch is of course a sapphire exhibition window to see everything nicely. You’ll see there written “Audemars Piguet Royal Oak CS1” which I believe relates to the design of the case. This might also be the official name of the watch – not sure at this point.

Overall this is a very cool, and very elegant by futuristically masculine watch. It is attached to a very high-end rubber strap and will more than likely be part of a very limited edition production (price to match). Look out for these neat numbers soon.