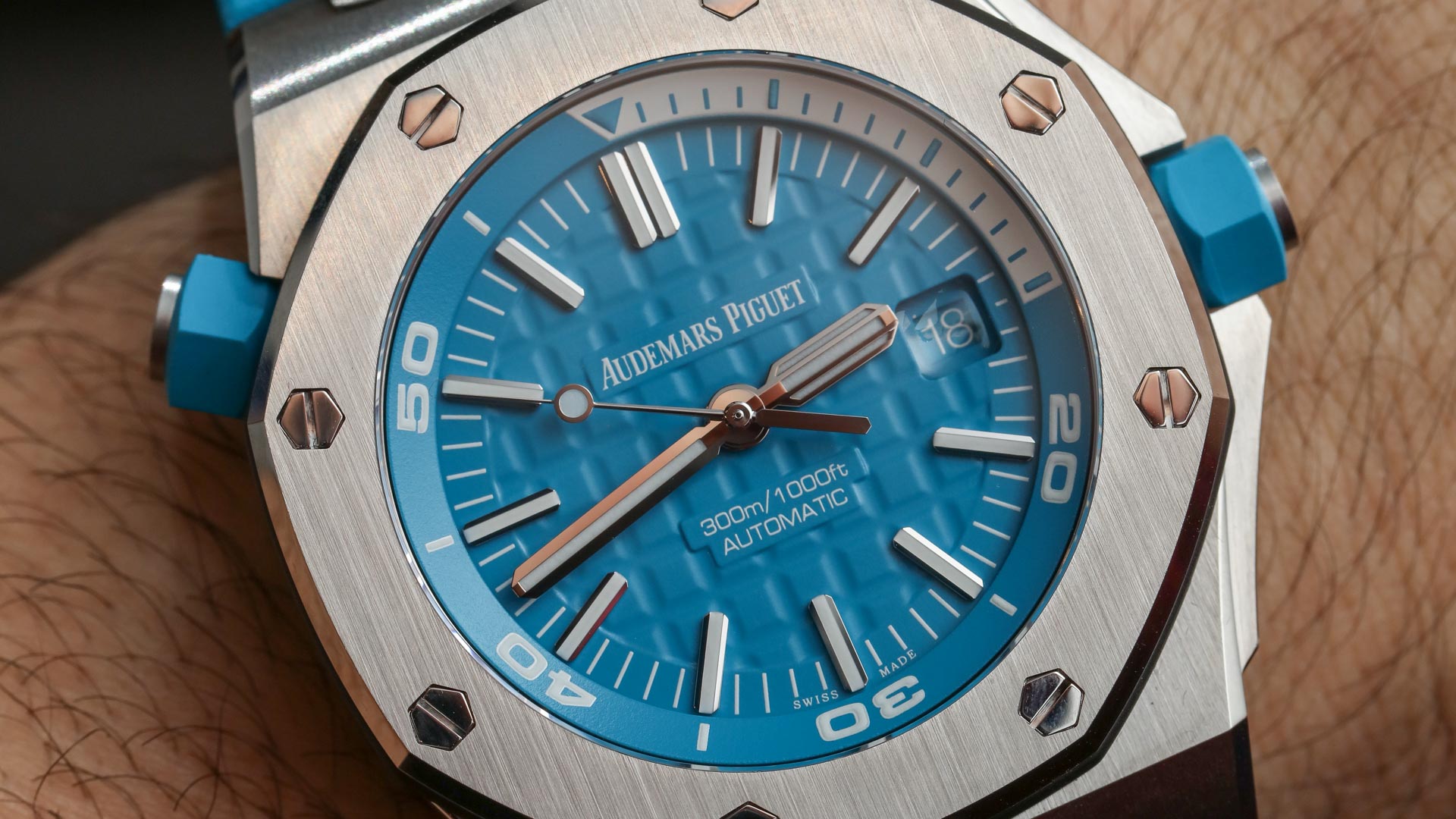 Introduced in 1993, the Audemars Piguet Royal Oak Offshore was a bold and divisive watch, so much so that Gerald Genta, who designed the original Royal Oak, reportedly invaded the Audemars Piguet booth when it was unveiled at Basel and shouted that his Royal Oak “had been completely destroyed.” Later, the first Royal Oak Offshore Diver was introduced in 2010, and it was Audemars Piguet’s first ISO-certified dive watch. Since its inception, it has undergone a couple of iterations, but last year’s was probably the most radical, as it was introduced in an assortment of bright, “funky” colors. It’s pretty obvious that Audemars Piguet is perfectly aware that these watches are bound to be polarizing, with people asking, “Why would anyone pay $20k for a bright orange AP diver?” The answer is simple—because they like it, find it fun, and can afford it. Audemars Piguet know they have a strong customer base, and fresh, new offerings keep them coming back.

While last year’s new additions were bright—almost neon—this year’s new variations are milder. The four new colors joining the collection are turquoise blue, purple, beige, and khaki. Though they’re not dull by any means, they’re a bit more subdued, especially when compared to last year’s releases. The main ingredients of the Royal Oak Offshore Diver remain unchanged. The stainless steel case is 42mm wide and 14.1mm. On the octagonal bezel are exposed octagonal screws made out of white gold. There are two large rubber-clad screw-down crowns—one at 3 o’clock and another at 10 o’clock. The former is for adjusting the time and date, while the latter is for adjusting the internal dive bezel. All four models come with comfortable matching rubber straps with stainless steel pin buckles. As befits a true dive watch, water resistance is 300m. Like other Royal Oak Offshore Diver watches, these new watches are beefy and muscular, and they wear large on the wrist. If that’s not enough, the bright colors will certainly cause surrounding people to take notice. If you want a watch that is going to get noticed, I can think of few watches that do a better job standing out so prominently. That being said, the actual construction of the watch is also superb. The case is especially well made, with clean and sharp lines through and through, alternate polishes on the surfaces, and perfectly beveled edges on the bezel and on the sides of the case. Despite this being a big watch, the exquisite finishing gives the Royal Oak Offshore Diver a diaphanous air that is often missing in many dive watches. The dial is no less impressive. The colors are rich and vivid, and although the ‘Mega Tapisserie’ pattern isn’t quite as delicate the as the ‘Petite Tapisserie’ pattern found on the Ref. 15202 Royal Oak Jumbo, it is still beautiful to behold. To ensure legibility whilst diving, the Royal Oak Offshore Diver has thick hour and minute hands and hour markers, all made out of white gold and filled with luminescent material. The seconds hand, also made out of white gold, has a fat lollipop tip to make it easy for divers to see if their watches are still running. The rotating inner bezel is marked with contrasting colors to make it easy to read. The beige model has the first 15 minutes and the remaining tens of minutes in blue, while the turquoise blue, purple, and khaki models have white markings. There’s also a color-matched date window at 3 o’clock with a magnifier glass. I really enjoy date wheels with colors that match the dial, as they’re more harmonious and subtle. Of the four of them, the turquoise blue model is my favorite, with purple as a close second. The beige and khaki models are too subdued for my liking. These new models all have see-through sapphire casebacks that reveal the in-house self-winding caliber 3120. It is easily one of the best finished movements in any dive watch. The first element that catches your eye is the large 22k gold rotor that features the family crests of the Audemars and Piguet families. Peer deeper and you’ll find beveled bridges with expertly applied Côtes de Genève as well as a nicely shaped balance bridge under which sits a large balance wheel. The caliber 3120 beats at 3Hz and has a power reserve of 60 hours. There really aren’t many truly high-end dive watches out there in this price range, as competitors like Patek Phillipe or Vacheron Constantin are not as prolific as Audemars Piguet in this category. The Hublot Big Bang line is obviously similar in boldness and attitude, but those aren’t divers. Something like the Blancpain Fifty Fathoms (or the Milspec edition) comes to mind, though it’s much more traditional and classic compared to the exuberance and dynamism of the Royal Oak Offshore Diver. Of course, as I mentioned at the beginning of this piece, many potential buyers of these new Offshore variants are not even interested in the competition, as it’s likely loyal AP fans who are picking many of these up. Some critics will definitely think these are much too ostentatious, but I don’t think there’s anything wrong with that, especially since their construction is exemplary. The Audemars Piguet Royal Oak Offshore Diver in new colors for 2018 is priced at $19,900. audemarspiguet.com