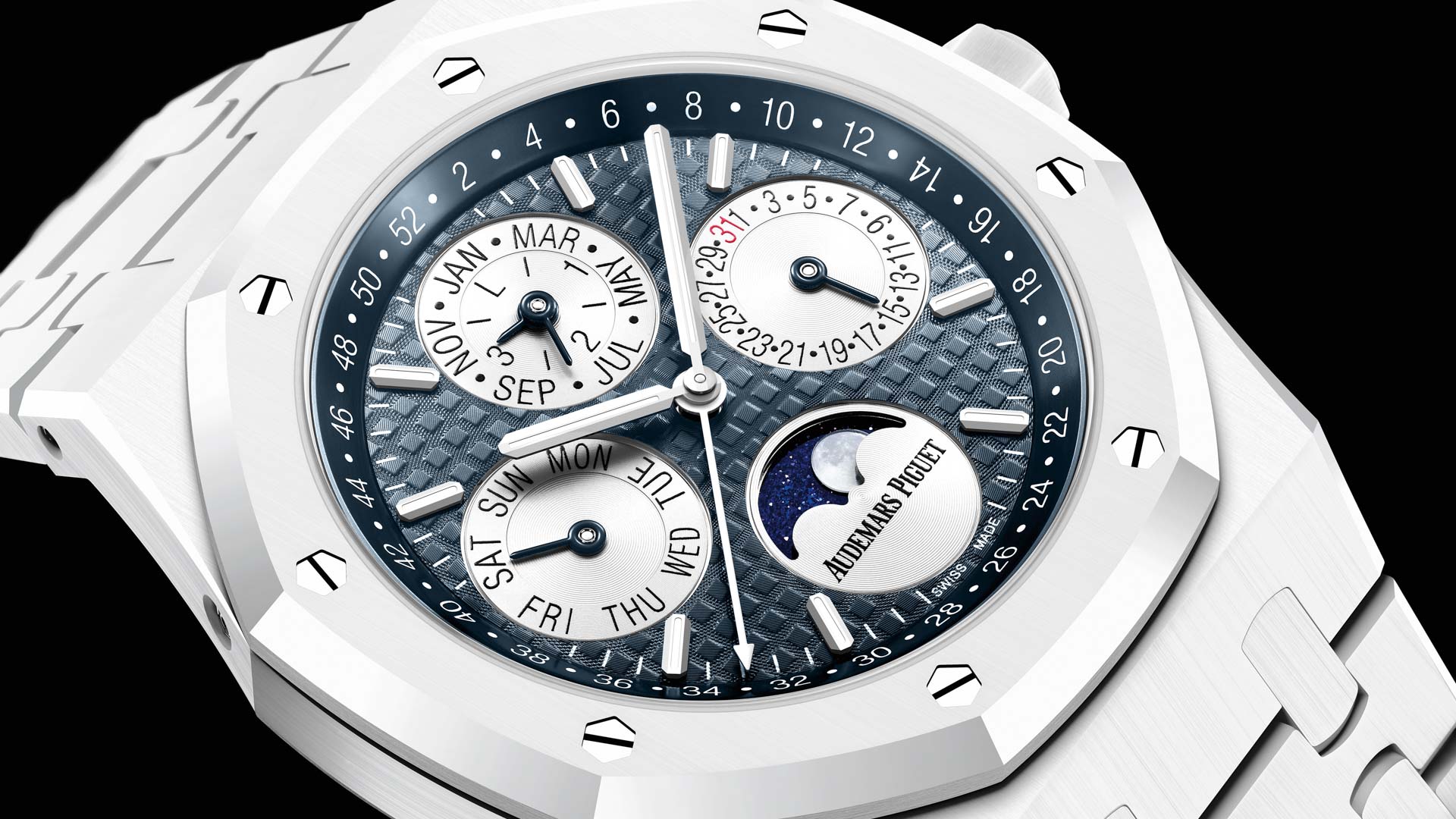 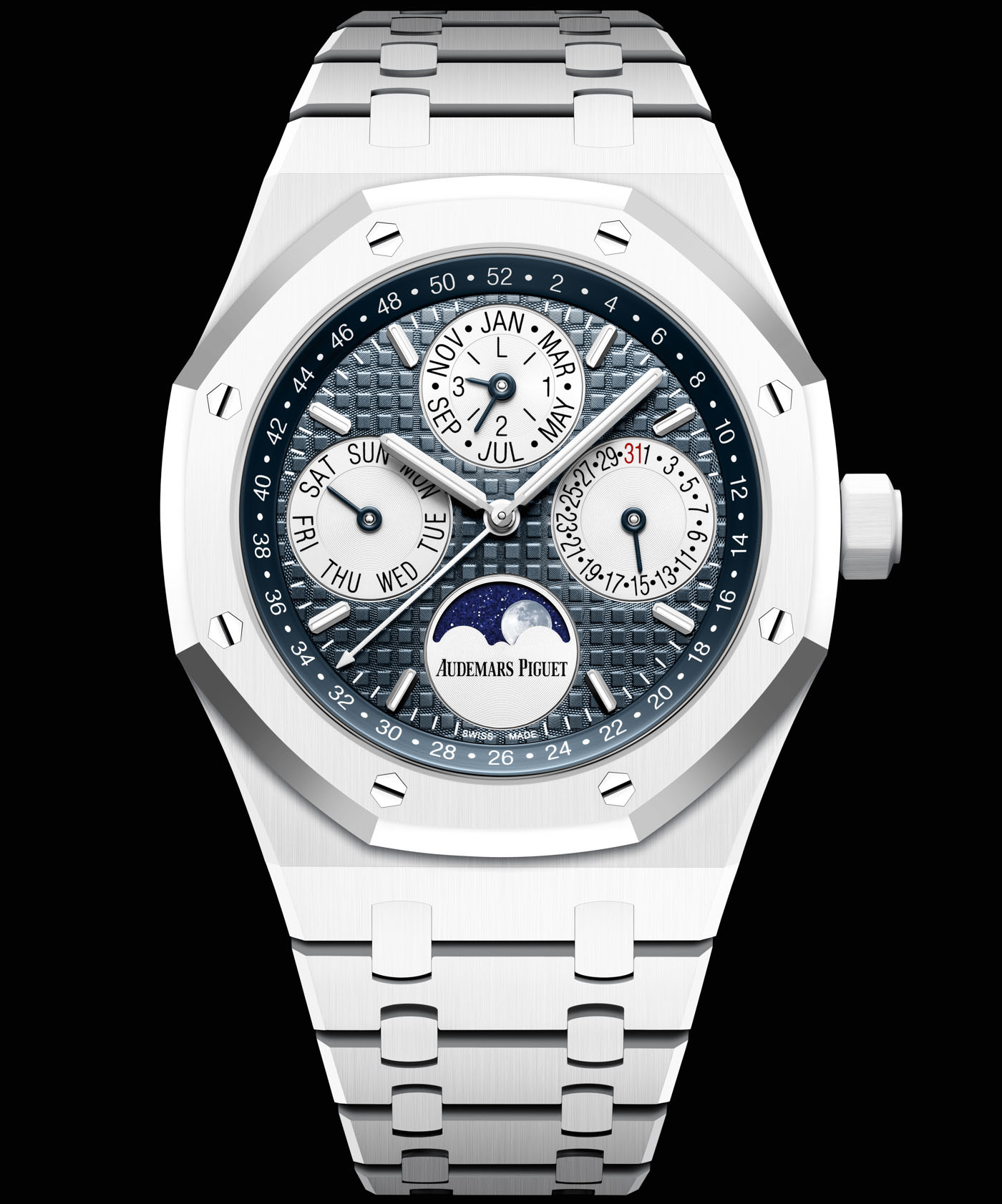 There are two colors of scratch-resistant ceramics that are easy to produce for watches: black and white. Since the black version of 2017, the possibility of there ever being an Audemars Piguet Royal Oak Perpetual Calendar White Ceramic increased tremendously — and lo and behold, here it is. Eye-catching it is, to say the least. Where many classic watches reimagined in white ceramic are softened by a traditional, or at least off-setting, strap, this AP pulls no punches. In fact, it rains down horological haymakers on your sensory cortex thanks to its fully integrated bracelet — and the fact that every exterior component, albeit crafted from ceramic, is finished to the same standards as we had gotten used to from AP’s famously high-end steel and gold cases and bracelets. 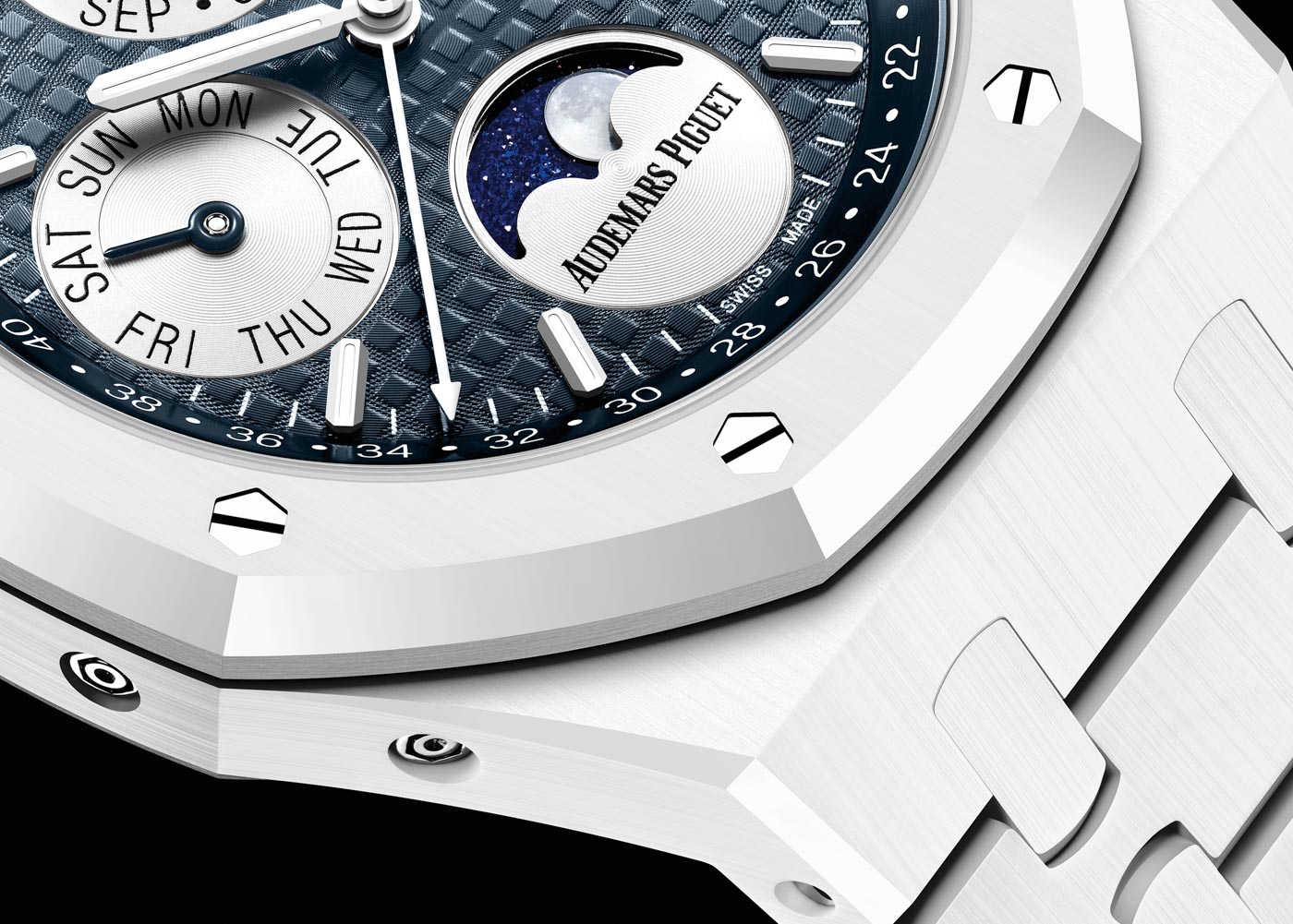 The thing with white ceramic is that it is hardly ever really white. It’s much warmer than that, a fact that leads some to call it “plastic” — though we’ll give everyone the benefit of doubt and say they’d probably not make the same assessment if seeing said ceramic watches in the ceramic. It isn’t cream, or ecru, or any other kind of off-white, but it does have a weird sense of chromatic depth that saves it from looking too plasticky on the wrist. And at a pleasantly reserved 41mm-wide by 9.5mm-tall, this case is not only the same proportions as its less avant-garde range-mates, but it’s also consciously subtler than one might expect. 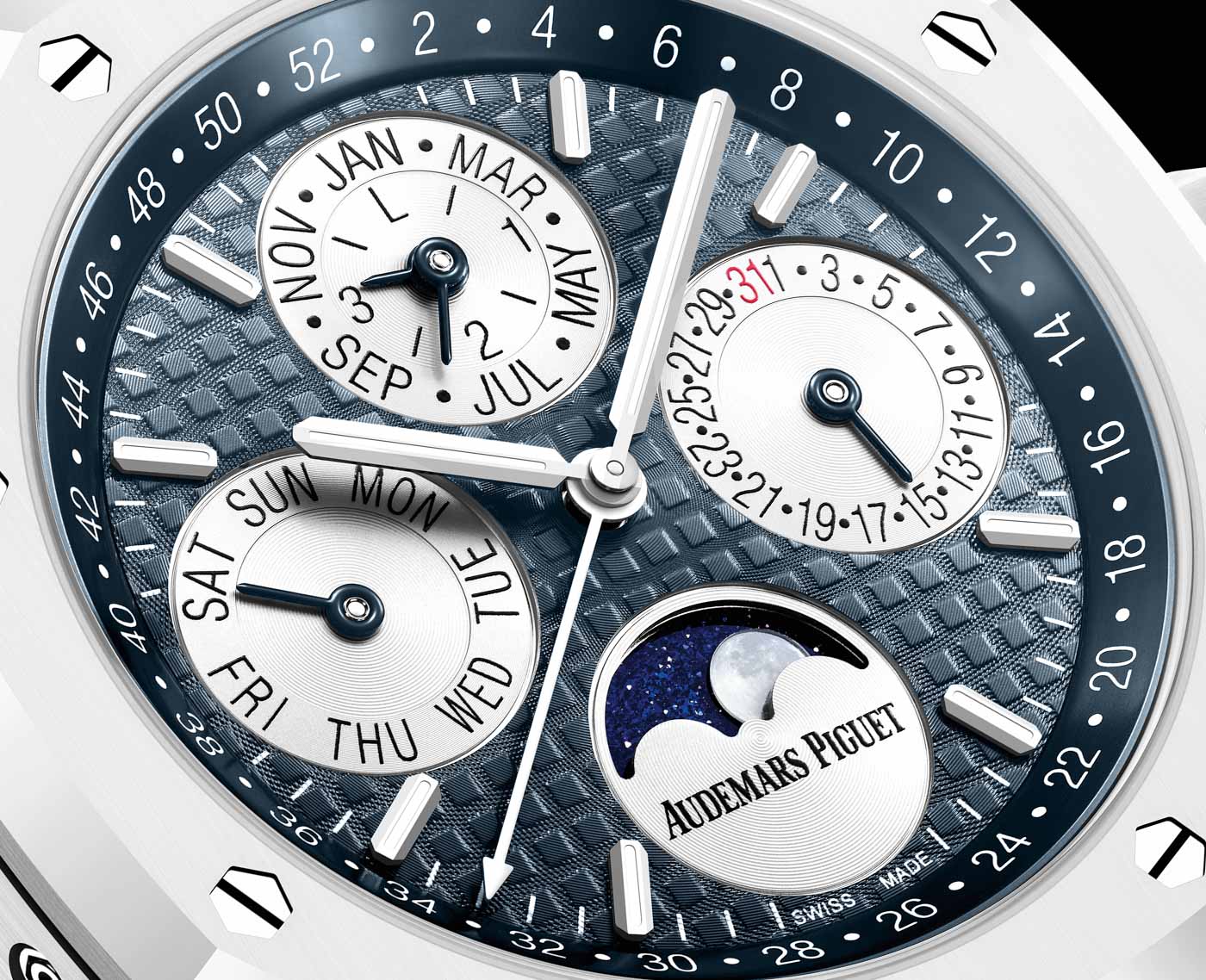 One area that surprised me at first glance is the dial. I had just assumed that Audemars Piguet would opt for a white-on-white colorway to really hammer home the flagrant whiteness of the watch and bracelet. Instead, the brand decided to team the hyper-showy case with something a little more debonair. 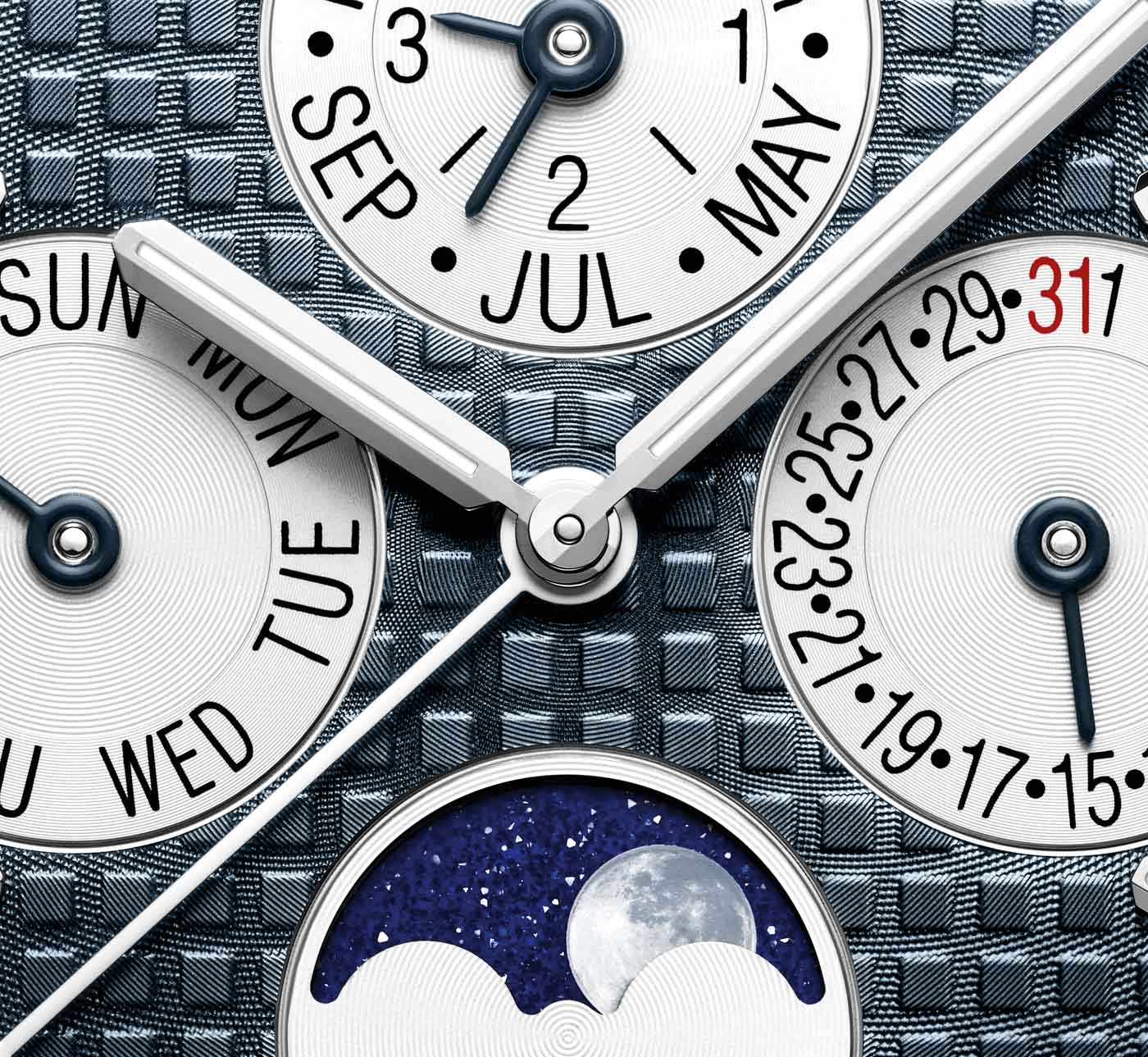 A dark blue tapisserie dial is the base for one of watchmaking’s finest and most adored complications: the perpetual calendar. The movement behind the perpetual calendar is the caliber 5134, which beats at the rather unusual frequency of 2.75hz (19,800vph). Despite this slowish-beat escapement, the power reserve is only 40 hours — quite disappointing, especially considering the rather more high-tech exterior and AP’s deep-rooted passion for praising itself. This is likely attributable to the thinness of the mainspring that powers the movement. 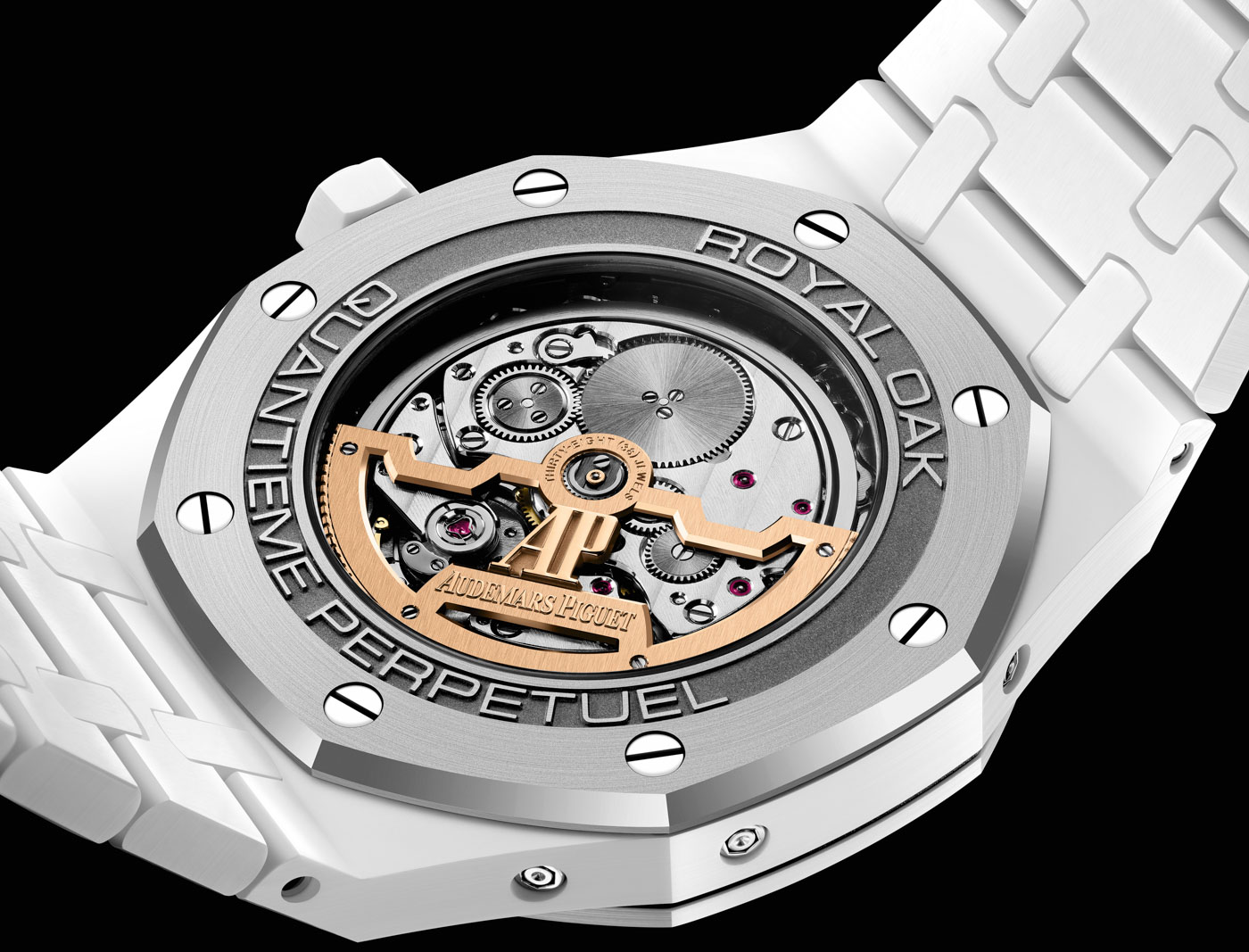 The 5134 starts life as the caliber 2120, which is known for its exceptional gracility (just 2.45mm-thick) before a perpetual calendar module is grafted on top. The base of the caliber 2120 is the Jaeger-LeCoultre caliber 920 that dates back to 1967 — in that half-century, watchmaking has managed to squeeze more than just 1.5 days out of a slim movement. (Just think of Chopard’s Caliber 96 that stacks two barrels in a 3.3mm-thick movement to offer 65 hours of power reserve at 4 Hertz operating frequency.) Where there is a will…  Still, the fact that the power reserve of the 2120 and the perpetual calendar-equipped 5134 is the same is a bit of solace: it would not be surprising for such a complicated complication to draw heavily on the power reserve (as even a simple date mechanism can knock an hour or two off the best estimates of many lower-tier movements). In addition to some fine gearwork, this perpetual calendar is notable for the information it displays. In unusual fashion, the week of the year is indicated by way of a pointer hand and a specially printed chapter ring that encircles the dial. The silvered sub-dials display the month and leap year (at 12), the date (at 3), the day (at 9), and the phase of the moon (at 6). These sub-dials are fitted with either one, two, or zero heat-blued hands, while the hour, minute, and seconds hands are made from 18k white gold. 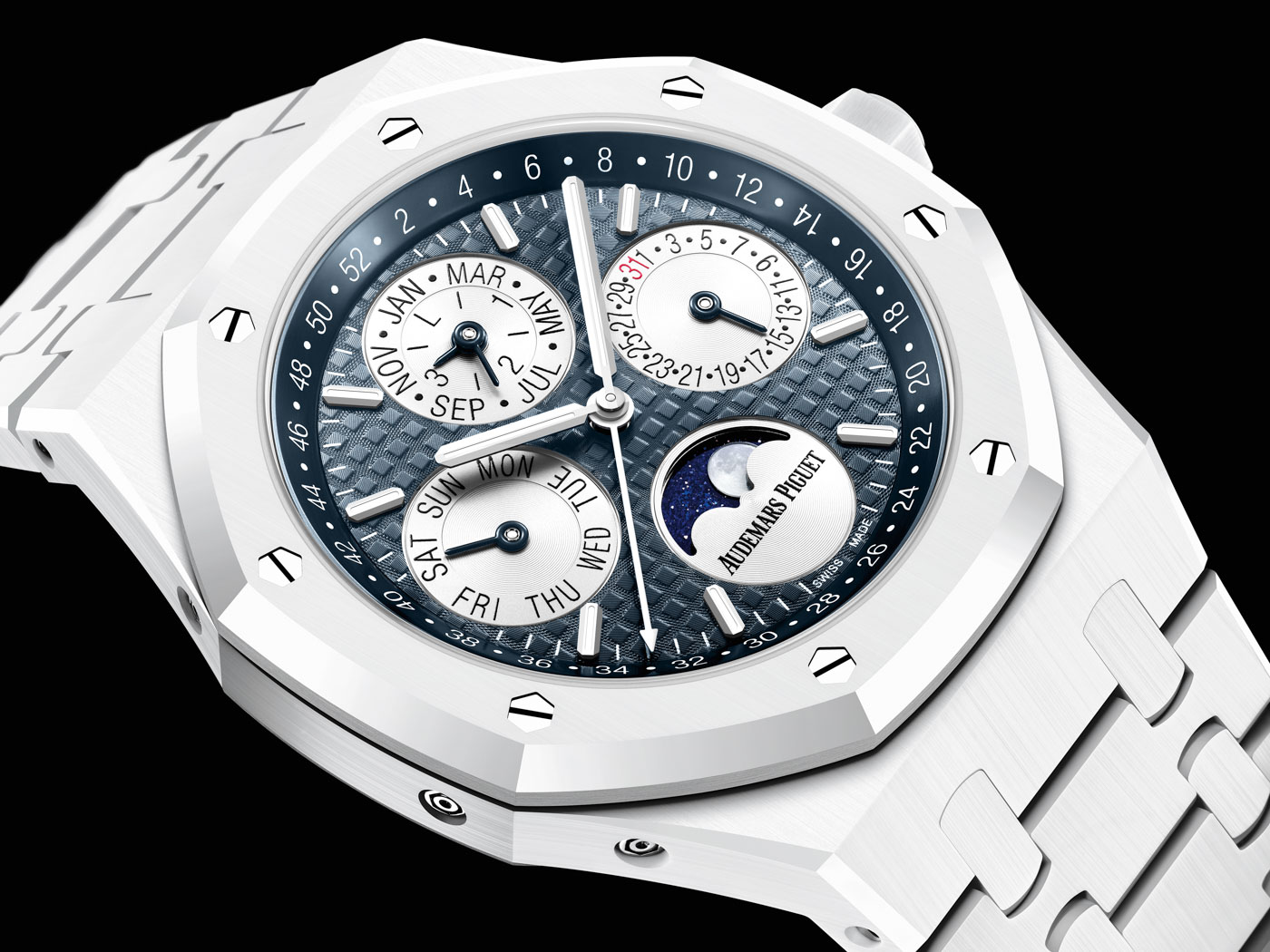 Impressive on the outside, handsome on the face, and disappointing on the inside, the Royal Oak Perpetual Calendar White Ceramic watch (ref. 26579CB.OO.1225CB.01) is exclusive to official Audemars Piguet boutiques and will retail for a whopping $93,900. Learn more at audermaspiguet.com.