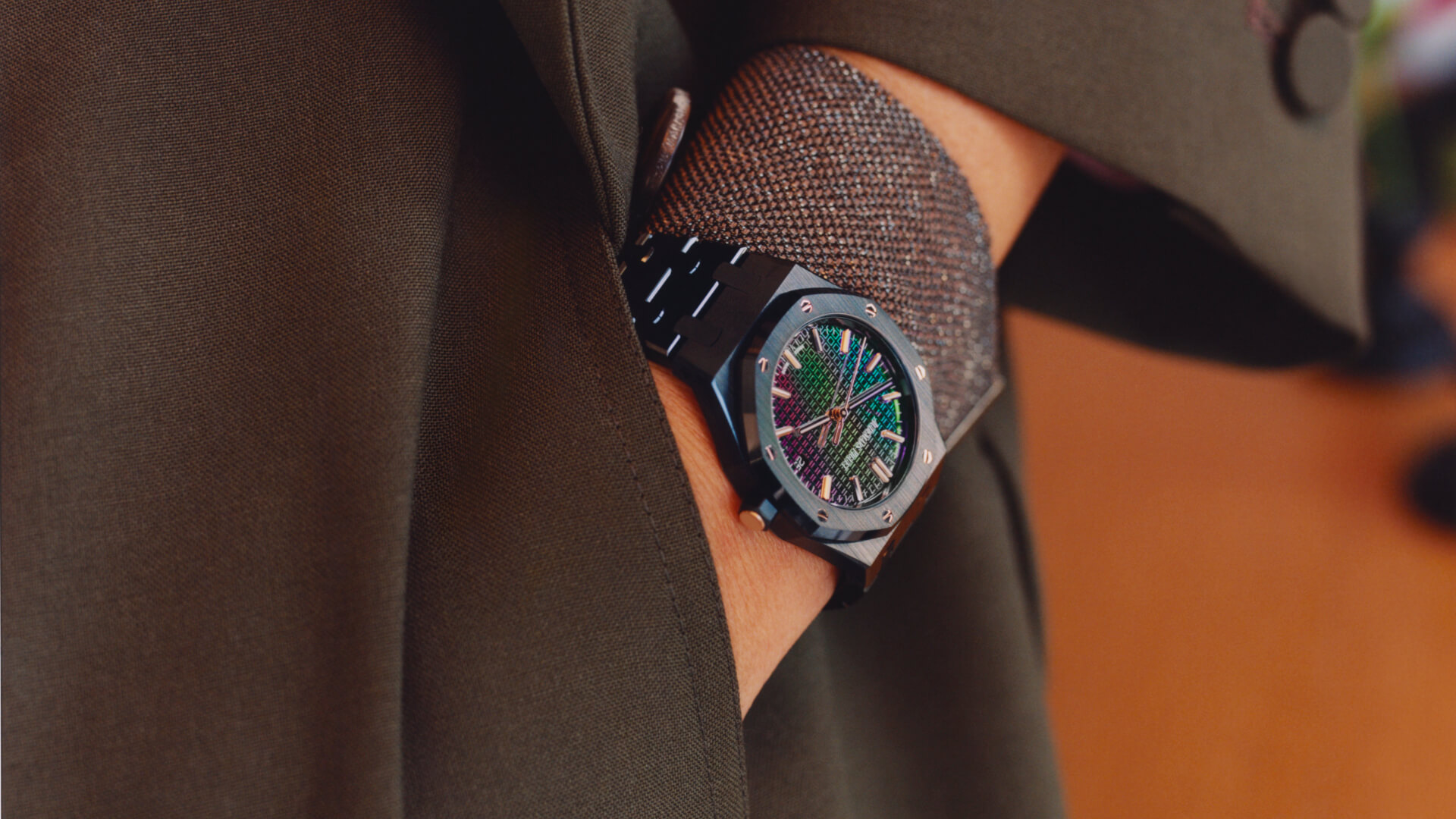 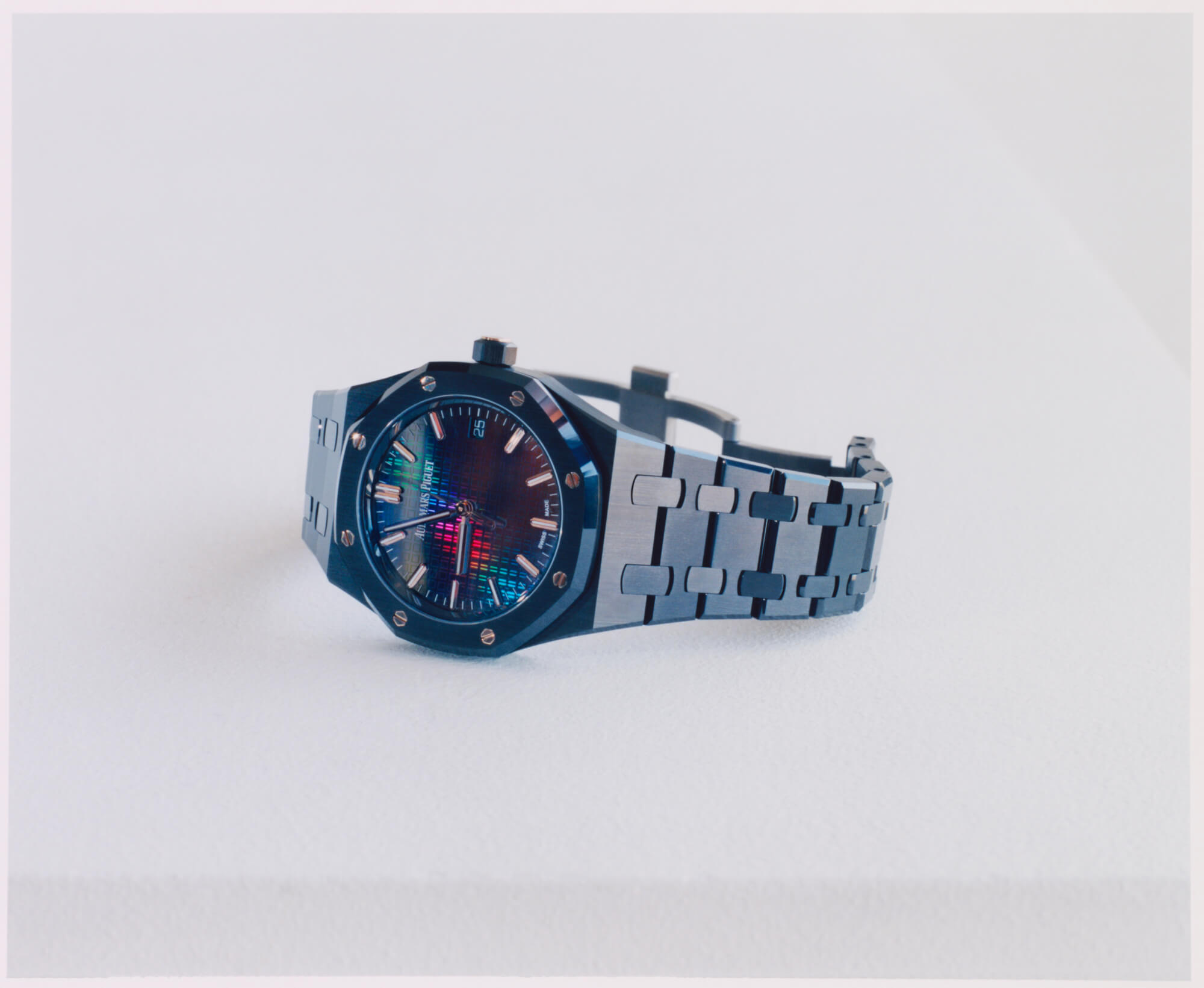 It’s 2022 and Audemars Piguet is not going to squander the 50th anniversary of its flagship model, the Royal Oak. We’re only halfway through the birthday year and AP has released an array of updated and new Royal Oaks, including an anniversary Jumbo and an extra-thin flying tourbillon model. On top of that, several high-profile auctions put the iconic steel sports watch in the spotlight, with lots including sketches by its designer Gerald Genta and a blacked-out model purportedly worn by Karl Lagerfeld. All of the new releases to date involve slight tweaks or complicated incorporations to the existing model—while exciting, they’re all decidedly familiar. With the new Audemars Piguet Royal Oak Carolina Bucci Limited Edition, though, the brand and its collaborator seek to play with that familiarity by bringing a decidedly new dial to the line. 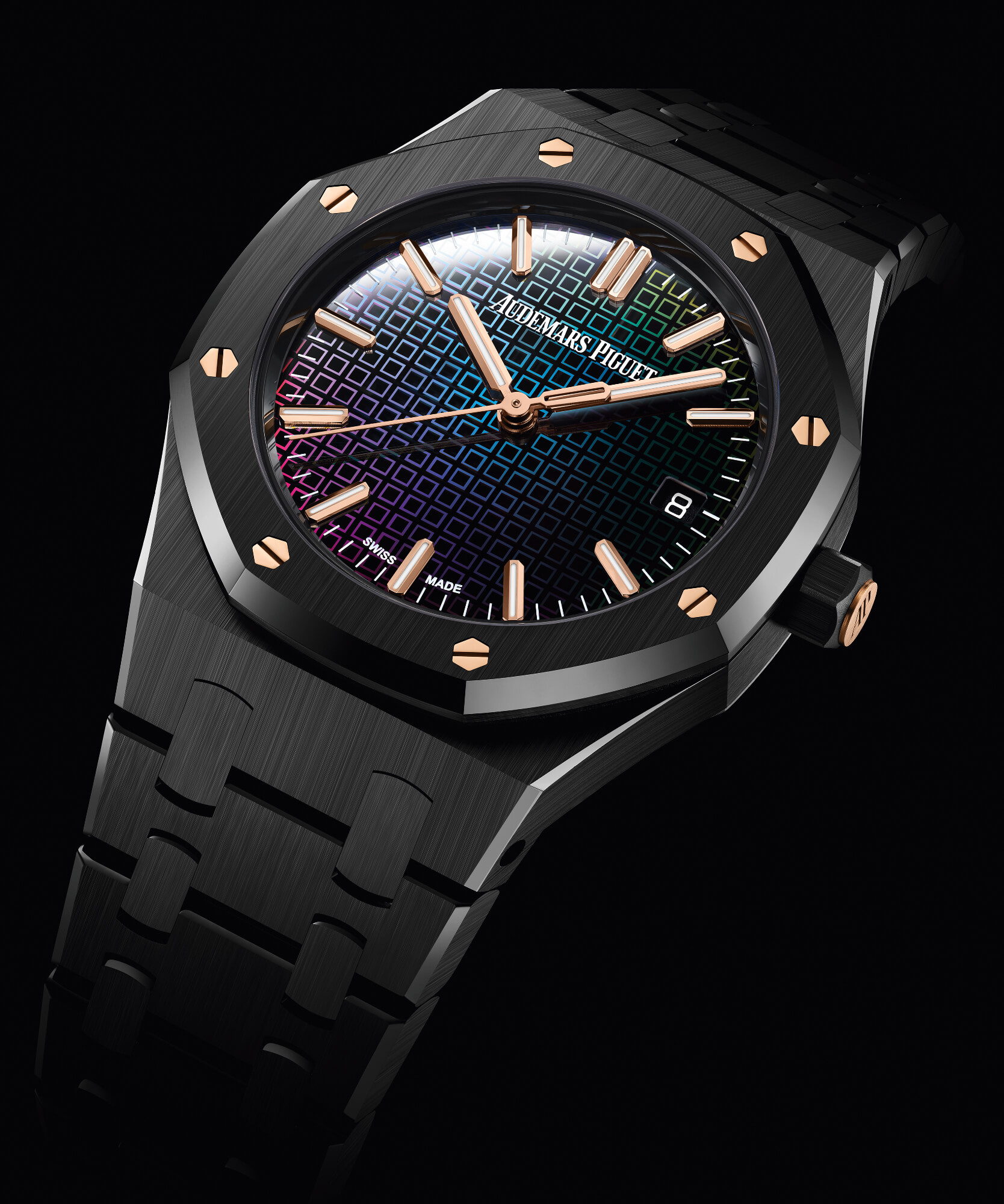 This isn’t the first time the Le Brassus watchmaker has partnered with Italian jewelry designer Carolina Bucci. She has twice brought her Florentine hammering—or frosted gold—technique to the Royal Oak line, once in 2016 for the 40th anniversary of the women’s Royal Oak, and again in 2018 for a 300-piece limited edition with a mirror dial. (So enamored was AP of Bucci’s technique that it started using it on several of its own pieces.) For this new limited edition, though, her tone has changed dramatically, as she introduces a dazzling display of color to the dial of the 34mm black ceramic Royal Oak introduced in 2021. 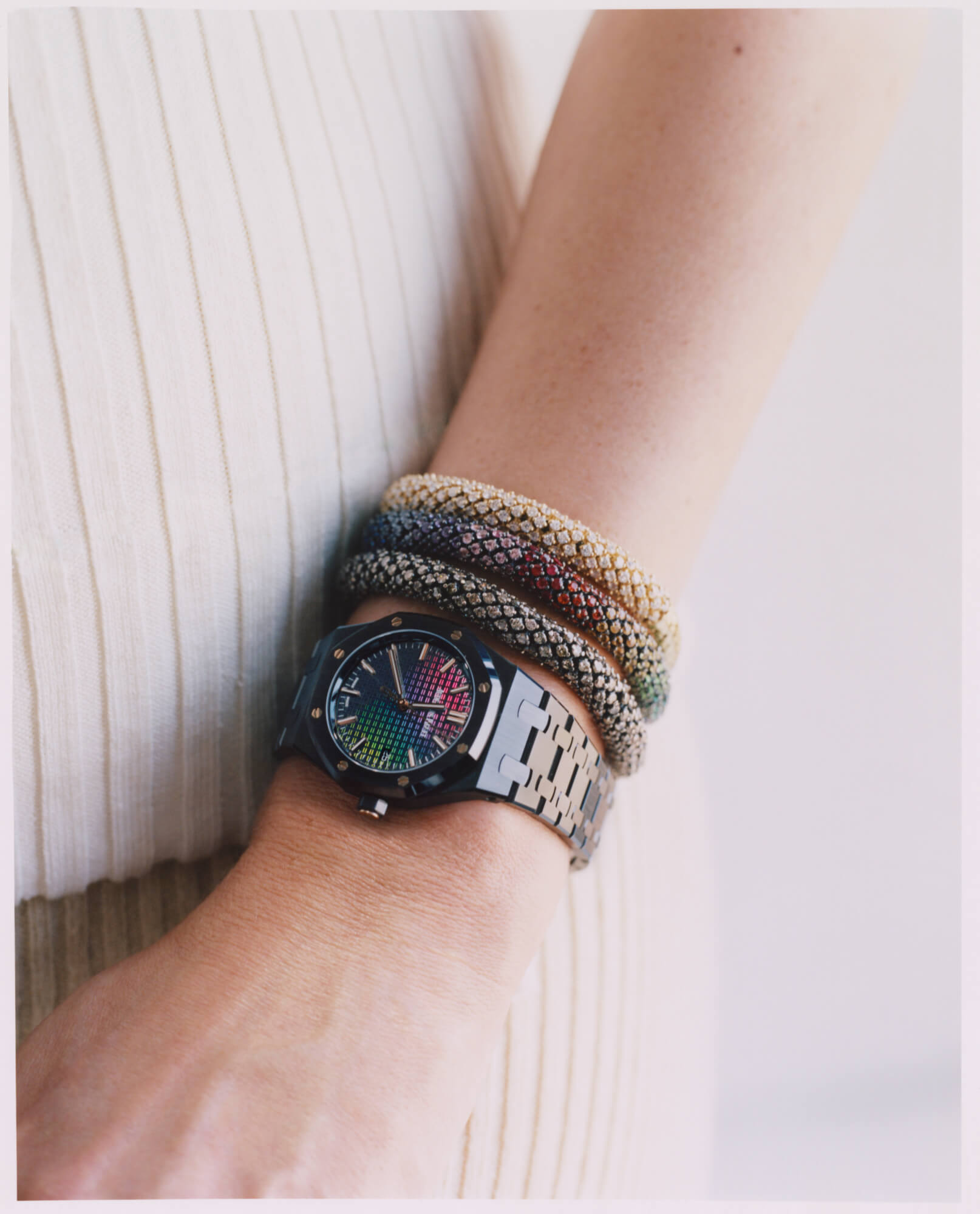 The Royal Oak Carolina Bucci Limited Edition comes in a solid black ceramic case measuring 34mm-across and just 8.8mm-thick. The case features the same satin finishing we’re used to with the Royal Oak, complemented by polished chamfers, which even in black ceramic seem to play with the light. The bolts on the bezel are 18k pink gold, offering a bit of contrast and keeping the watch just shy of fully blacked-out. While the crown is ceramic, the cap is pink gold and features the AP logo. Like most Royal Oaks, this edition has 50m of water resistance. The bracelet emerges as a continuation of the case form, with the same angles and the same combination of finishes. It’s been improved visually, with the pins now hidden within the studs instead of visible from the sides. While black cases tend to wear a bit smaller, the dial may be enough of a draw for the large-wristed among us. That’s where the magic really happens, after all. 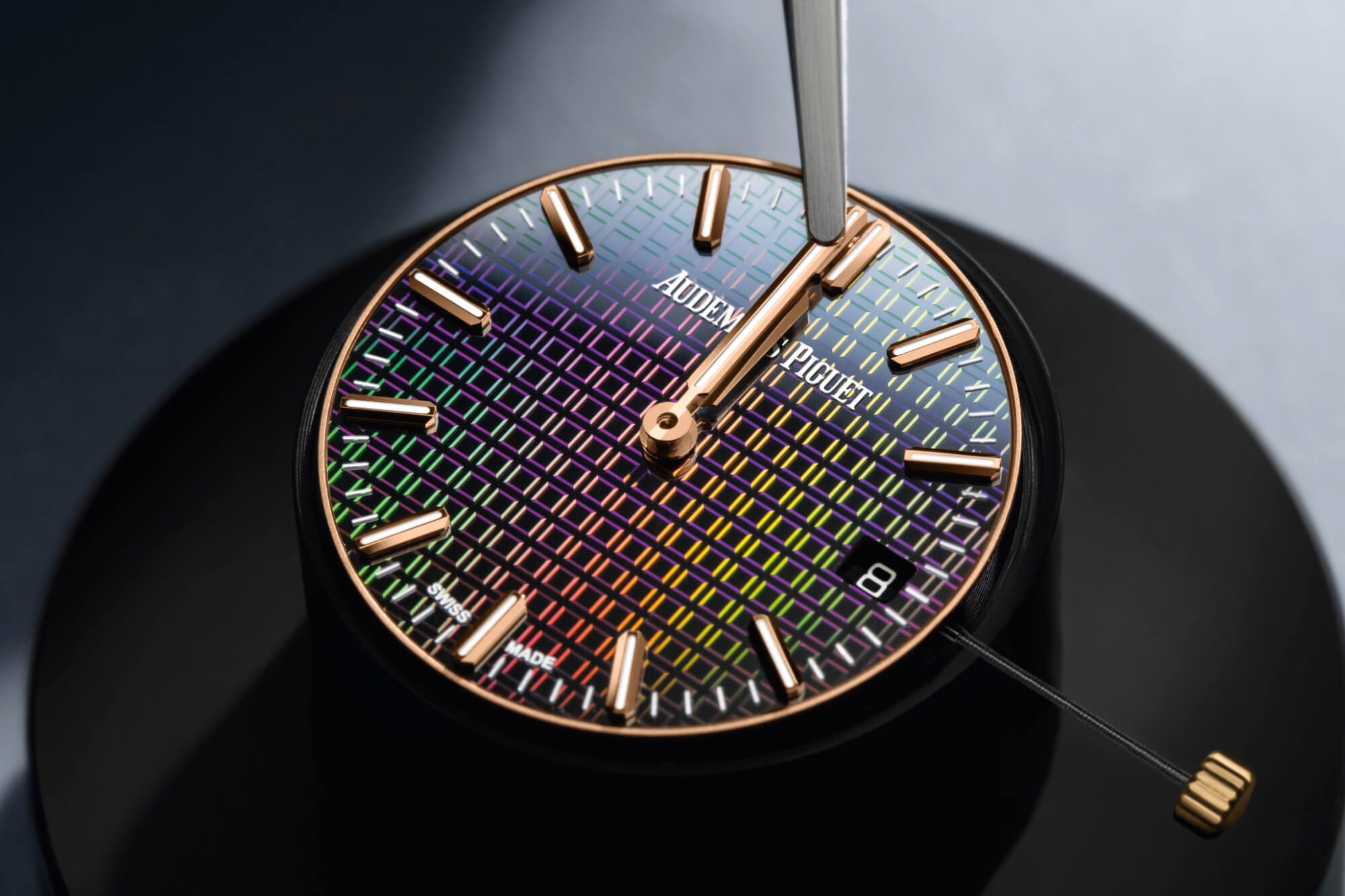 While typical Royal Oak dials are produced using a pantograph which follows an original mold to chisel the design onto a brass blank before finishing, Bucci’s required a different approach to incorporate the rainbow colorway she desired. A sapphire plate—laser-etched with the tapisserie pattern and with a proprietary golden metallization applied to its back—is added on top of a brass plate; the micro-structured lasering provides the rainbow palette while the metallization provides the light by reflection. At some angles, the watch might appear black, but when the light hits it, the rainbow tapisserie appears to come alive. Printed on the dial are minute hashes and the brand’s name, though its logo has been omitted to avoid disrupting the dial’s pattern. Curiously, the date has not been omitted and sits at 3 o’clock, decidedly disrupting the dial. The faceted hands and applied indices are pink gold and feature luminous fill. 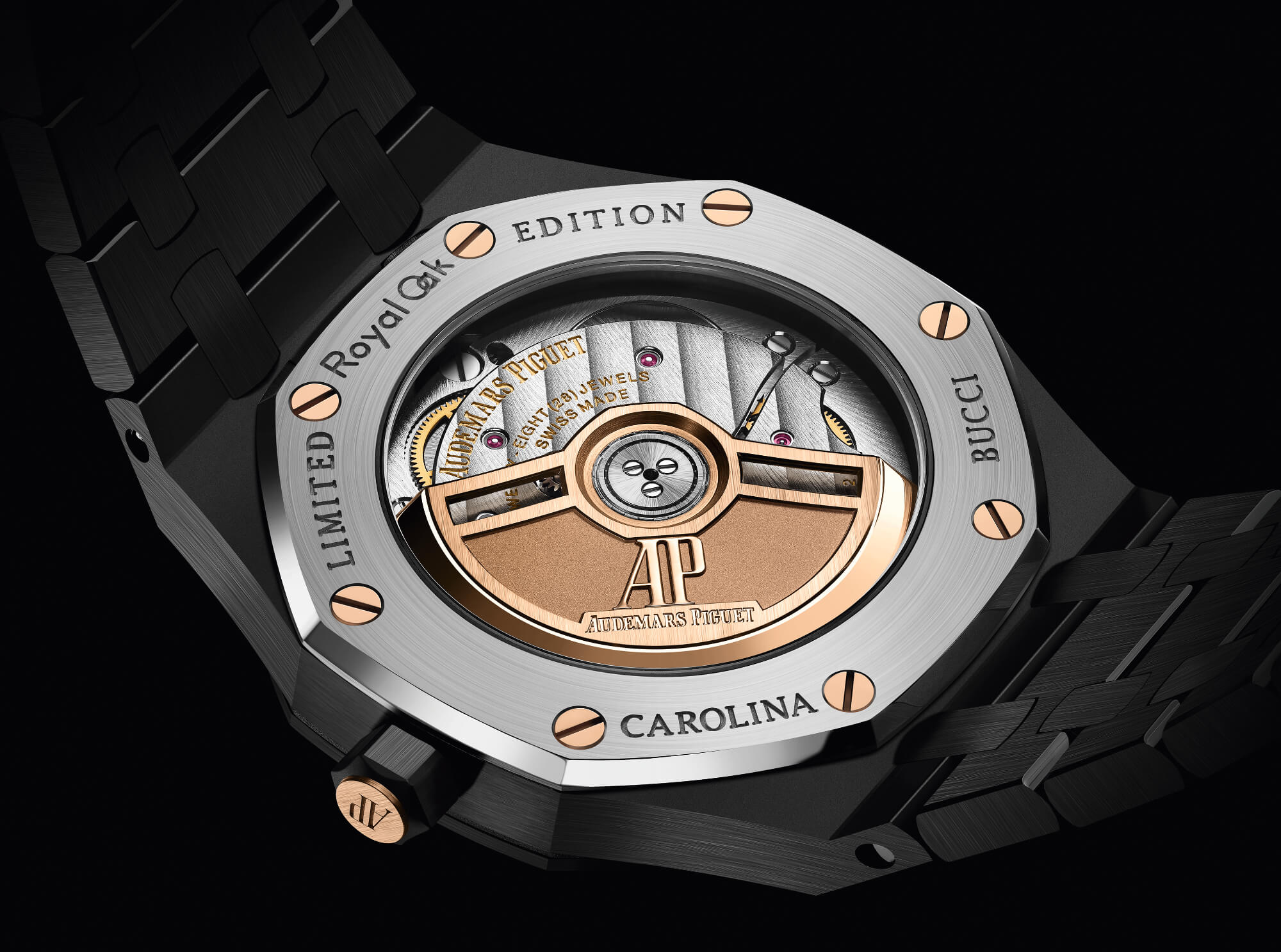 On the other side of the watch, a titanium caseback holds in place a sapphire crystal, showing off the automatic Audemars Piguet Calibre 5800 (the caseback is titanium due to ceramic’s poor resilience against torsional forces). The Calibre 5800 is sourced from Swiss movement manufacturer Vaucher, and made its debut as an exclusive AP movement in 2020. The movement features a decorated 22k pink gold rotor, 28 jewels, and a power reserve of 50 hours with a frequency of 4hz. The caseback text is kept simple, with the model name, “Limited Edition,” and Bucci’s name engraved between the pink gold screws. 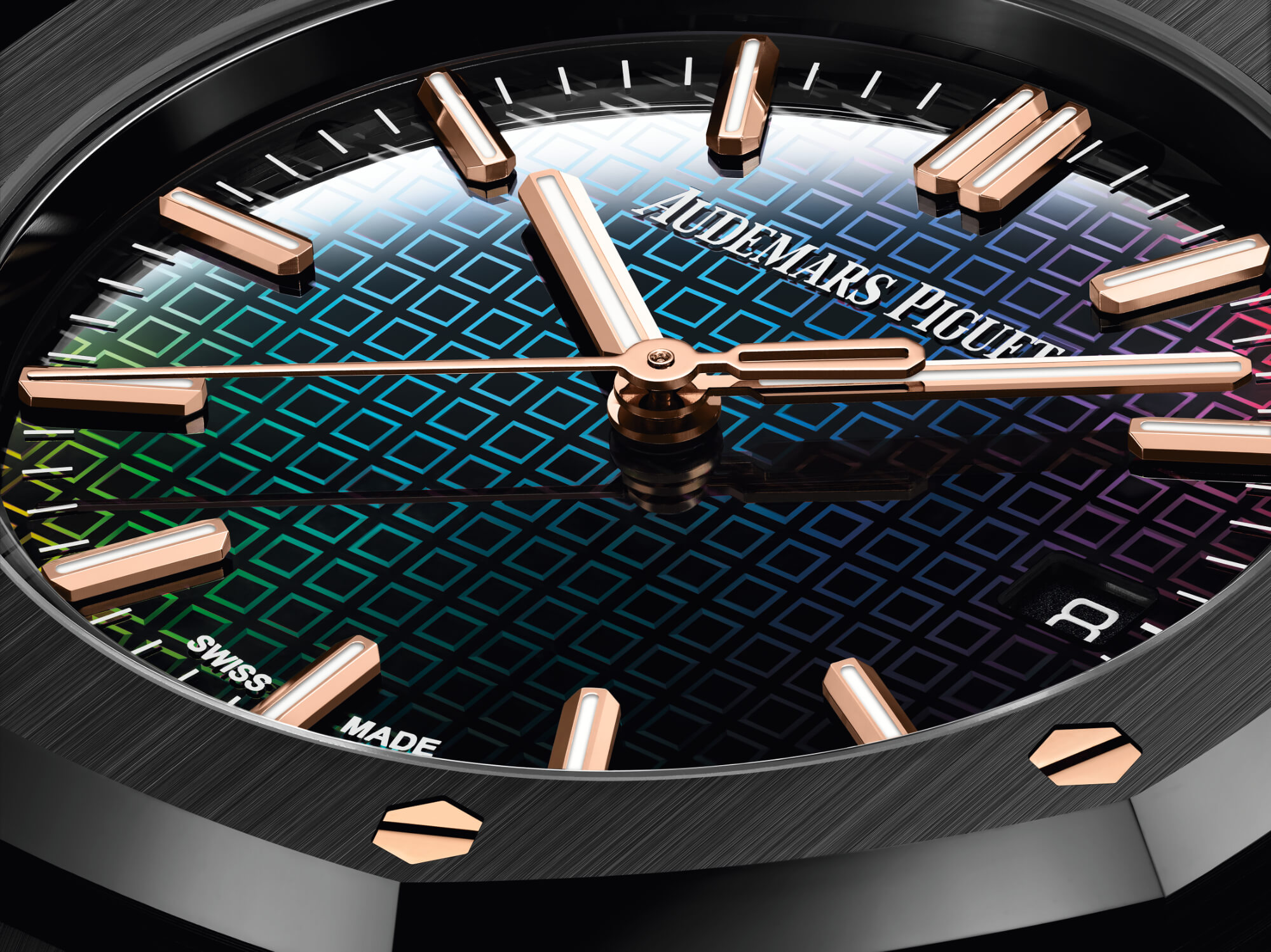 This is an exciting timepiece. Not only does it revisit a very popular recent Royal Oak release and play with the Royal Oak’s classic dial in an innovative and visually engaging way, but it also reunites Bucci with AP. One hopes that her continuing partnership with AP is a sign of a larger shift to create a more inclusive industry – bringing more women into design and production will only result in an expansion of creativity, and the Audemars Piguet Royal Oak Carlina Bucci Limited Edition is proof of that. The Audemars Piguet Royal Oak Carolina Bucci Limited Edition is priced at $54,200 and limited to 300 pieces. The watch comes in a presentation box, also designed by Carolina Bucci. For more information, please visit Audemars Piguet’s site.