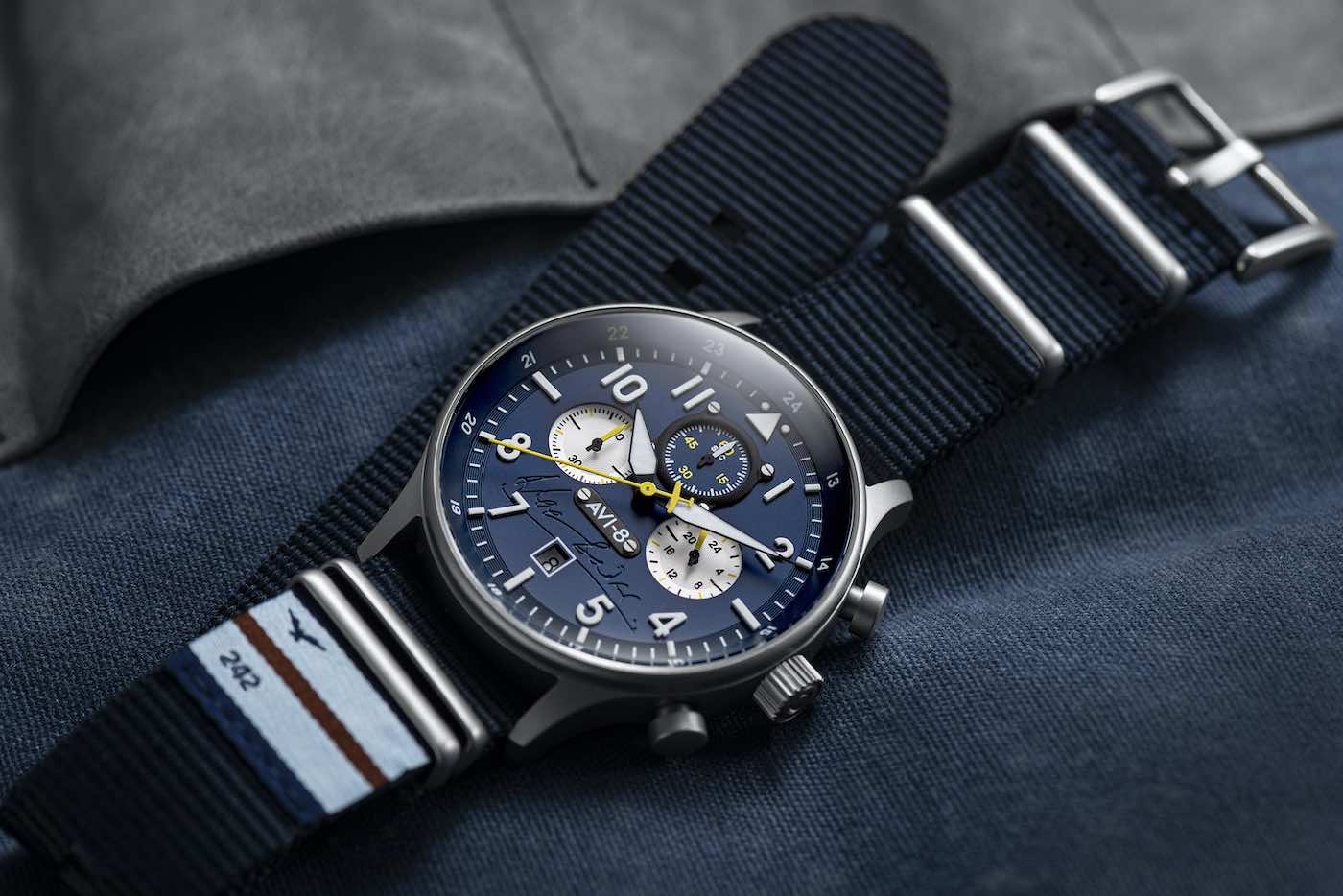 While commemorative timepieces are relatively common in the world of watchmaking, the historical figures inspiring such endeavors are often anything but. Such is the case of Sir Douglas Bader (1910-1982), a late, great British flying ace. Bader was not only credited with 12 victories during the Battle of Britain alone (22 in total) but also known for epitomizing the grit and bravery of the allied forces. A double amputee, Bader’s heroism was honored by Queen Elizabeth II when he was knighted for services to disabled people in 1976. This followed his renowned stint as Wing Commander of No. 242 Squadron during the Second World War. It is this legacy that AVI-8 hopes to perpetuate with the release of the AVI-8 Douglas Bader Chronograph Limited-Edition watch. 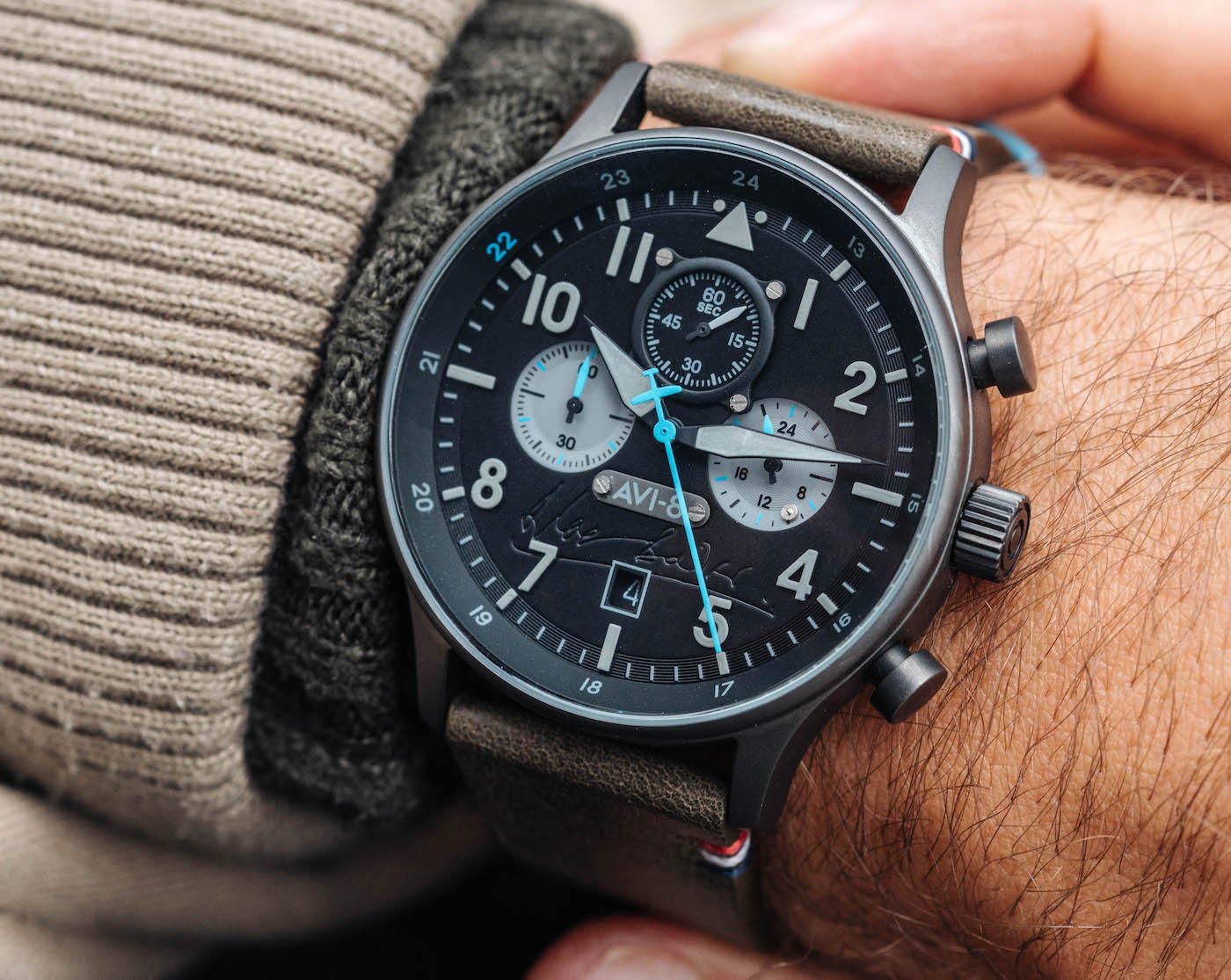 Three colorways in limited runs of 242 pieces are available, and 10% of all sales will be donated to the Douglas Bader Foundation, in addition to a lump sum that will help the charity continue its valuable work promoting the mental and spiritual wellbeing of persons who are without one or more limbs or are otherwise physically disabled. The foundation was established in 1982 — the year of Bader’s death — by a group comprised of family and friends of the aerial expert. AVI-8 is committed to ensuring that this work continues and is confident that the money raised from this project, in addition to the standalone donation, will be put to good use helping to effect real change in the lives of people living with disabilities. 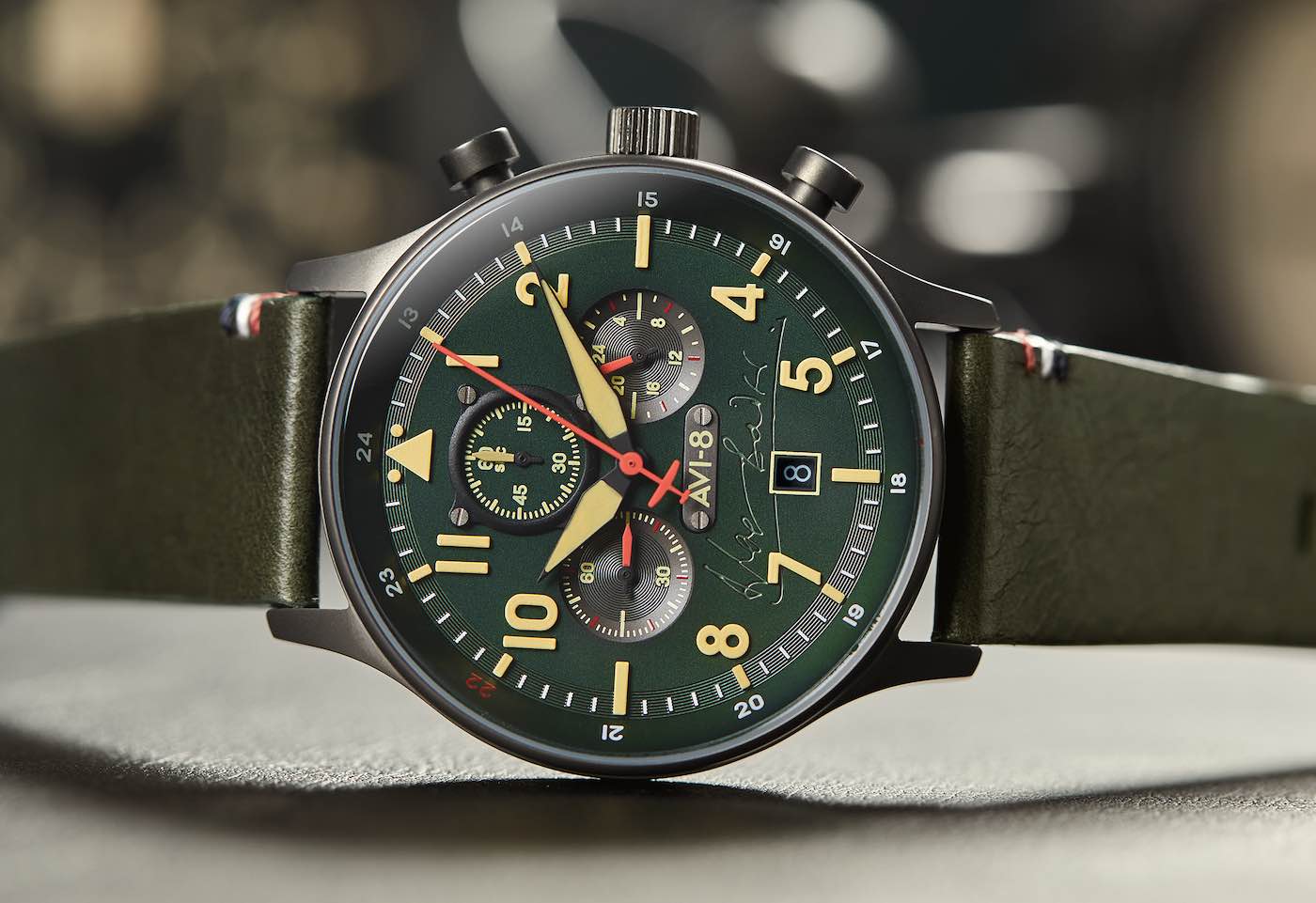 Bader was known among his comrades as being an exceptionally good-humored man, despite the hardships he experienced during his life. One of his most famous habits was to scrawl “Bader’s Bus Company, Return Tickets Only” on a chalkboard that hung outside a wooden hut just off the runway in an attempt to raise the spirits of the young pilots about to take to the skies to fight. Such a mental diversion tactic must have worked wonders as his squadron affectionately nicknamed itself the “Bader Bus Company.” 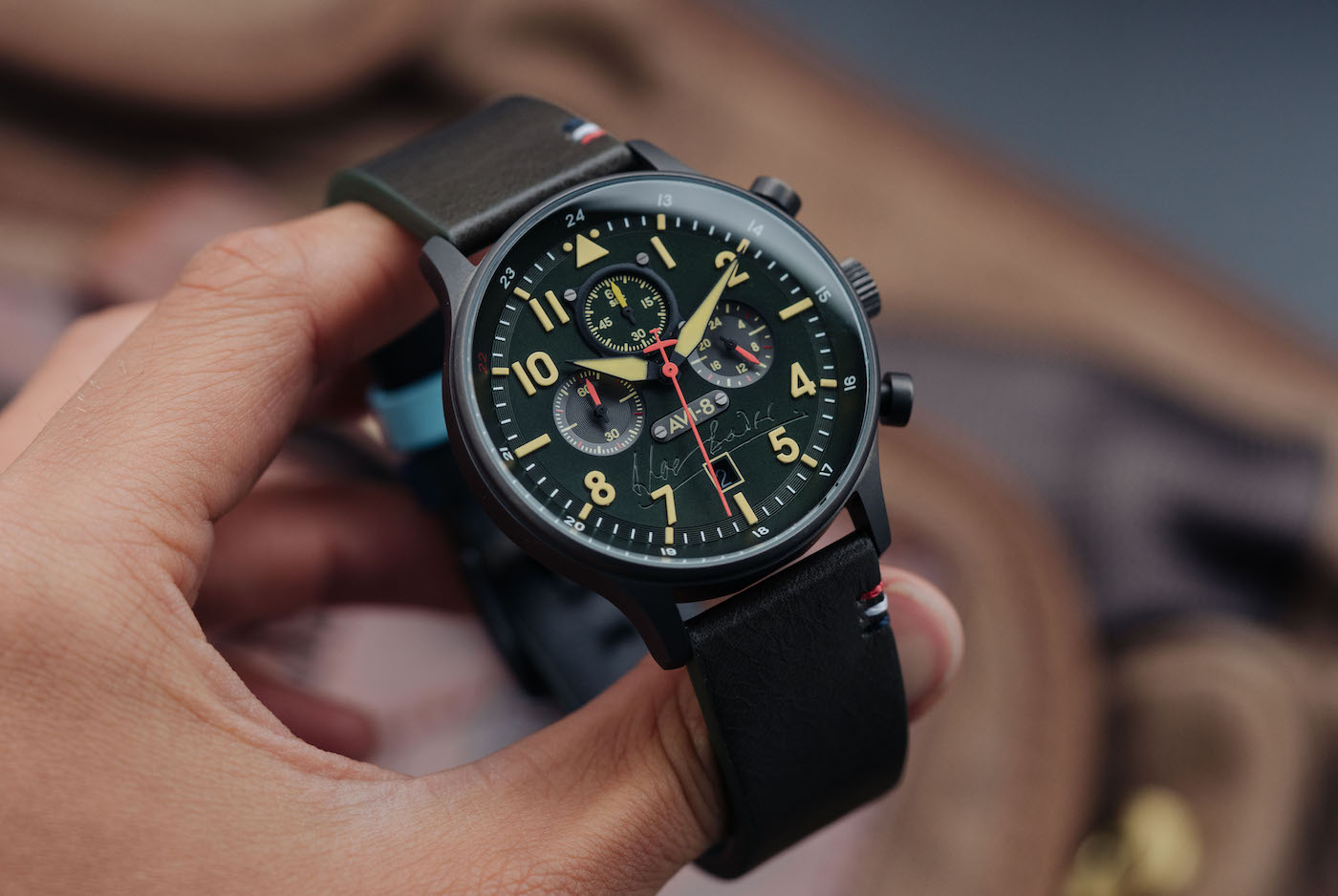 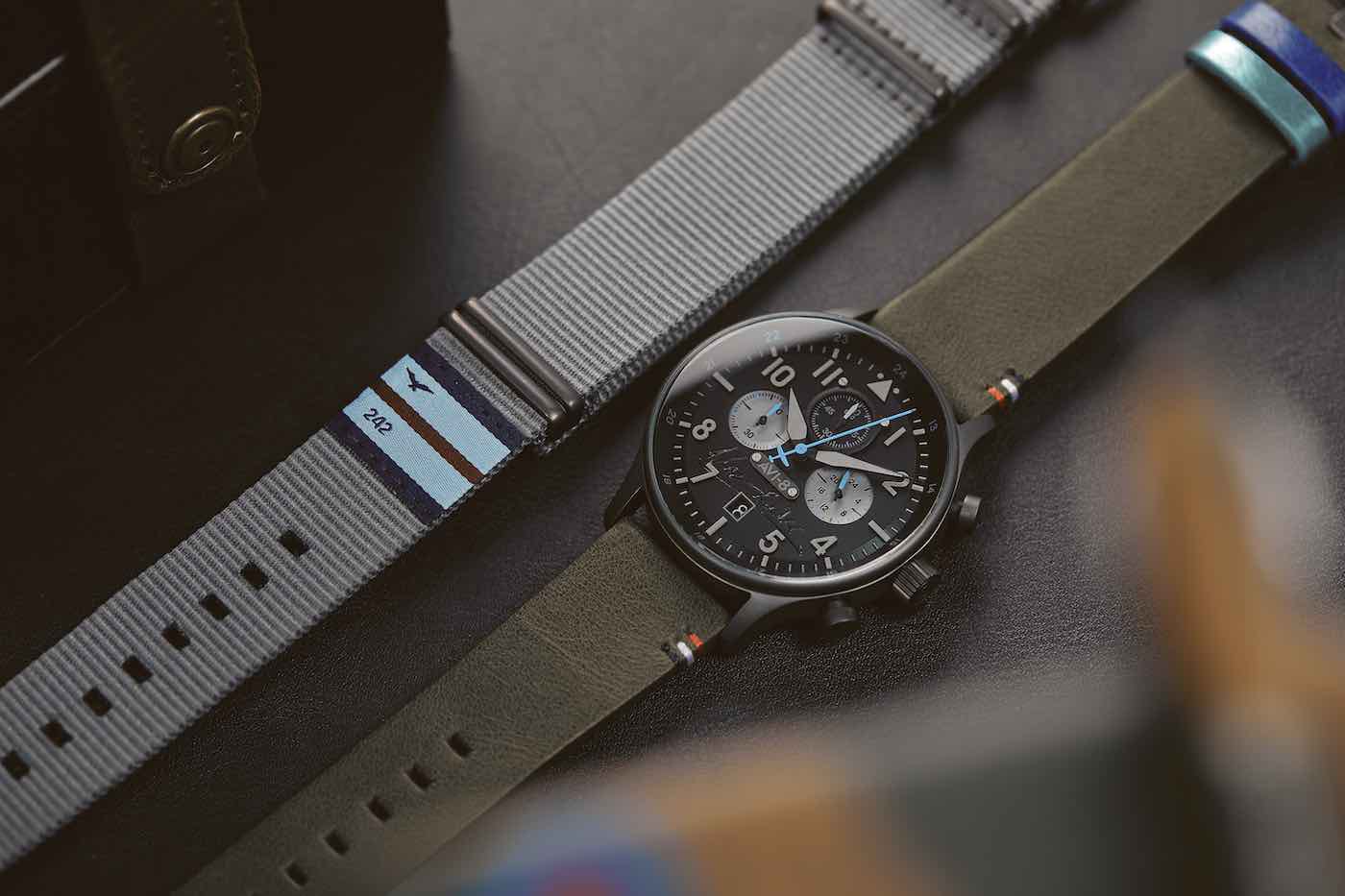 The watch itself is designed with Bader’s preference for precision and reliability in mind. As such, the Bader Chronograph has been outfitted with a Japanese quartz chronograph module (VD52), which records elapsed time using two subdials. At 12 o’clock, styled to look like a cockpit altimeter, the chronograph seconds can be found, while the 60-minute counter is positioned at 9 o’clock. The hour, minute, and seconds hands showing the normal time are all centrally mounted, while the subdial at 3 o’clock houses a 24-hour register. For improved dial balance, the date display is shown at 6 o’clock through an unobtrusive window in the dial. 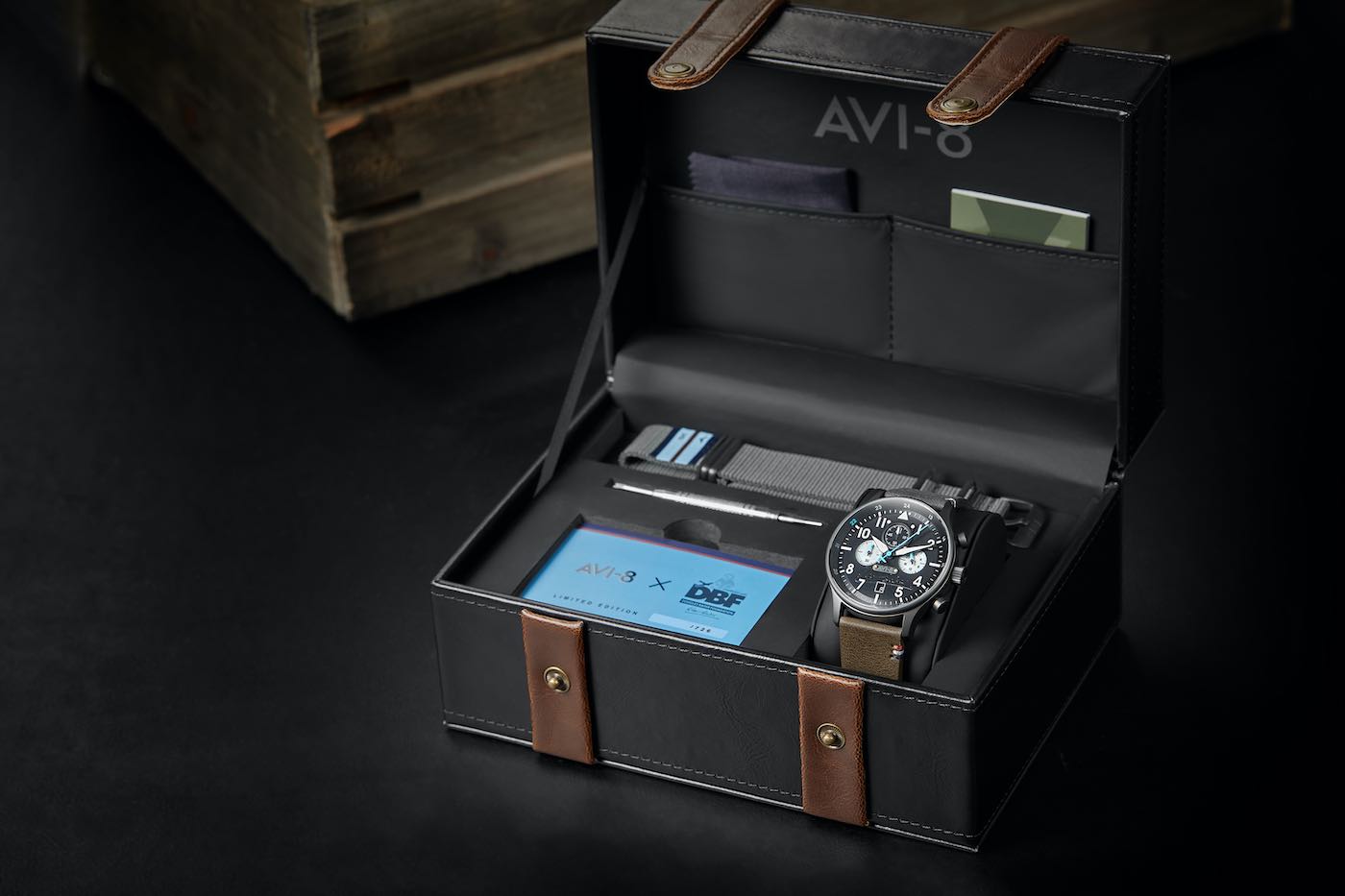 Just above the date window, Sir Douglas Bader’s signature can be found debossed in the dial. A screw-down plate between the signature and the center of the dial shows the brand logo, pleasingly pared back to not detract from the overall focus of the design. A simple, 44mm × 12mm stainless steel case with a finely blasted utilitarian finish stays within a military lane, while an anti-reflective mineral crystal and luminous applied indices ensure optimal readability in poor light conditions. 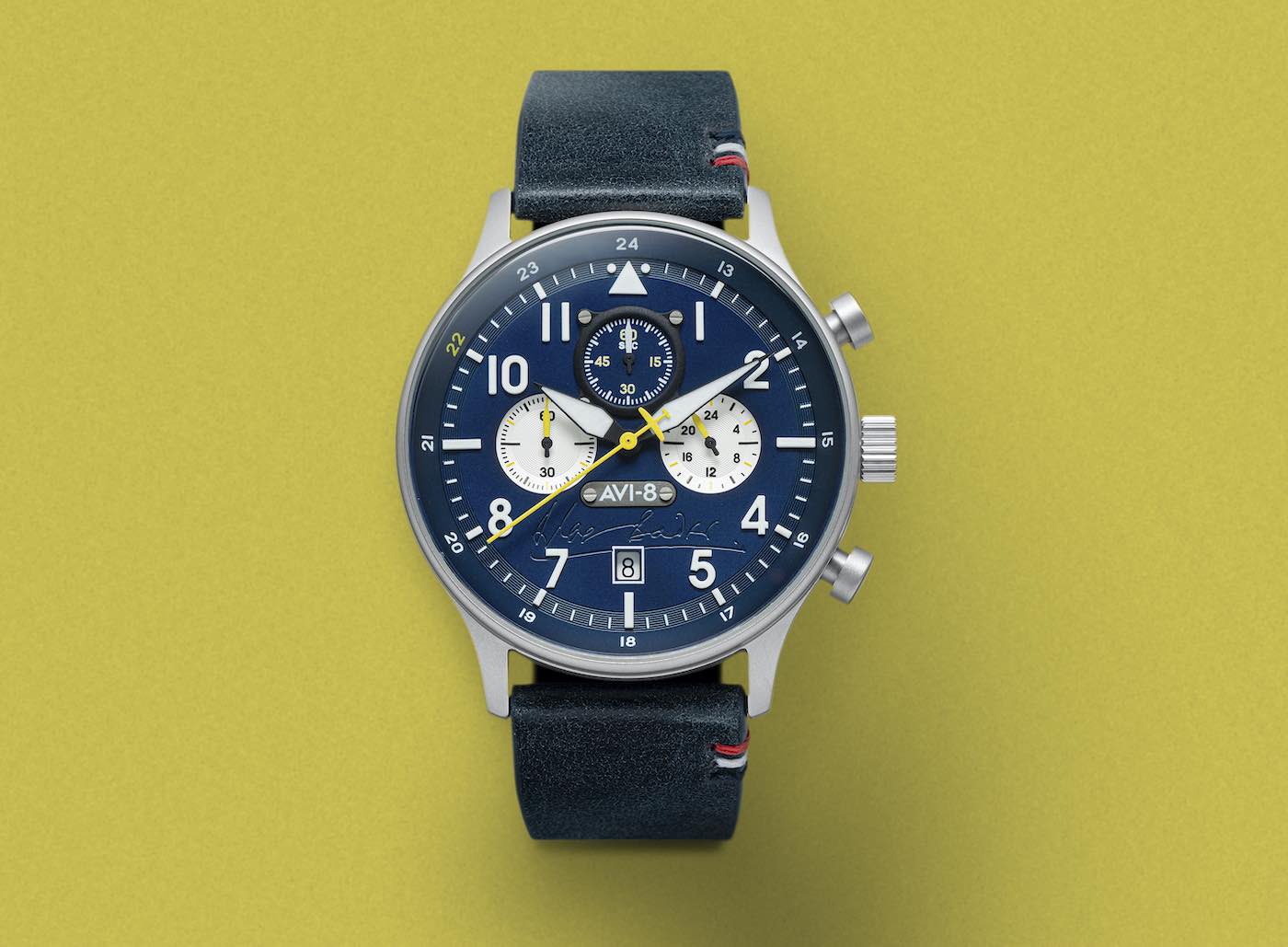 The watch is lightweight (coming in at just 75g) and robust, with a water resistance rating of 50 meters. All three watch designs are fitted to a color-coordinated leather strap, each one stitched with the colors of Sir Douglas Bader’s Hurricane’s Fin Markings for an added touch of reverence. The AVI-8 Bader Chronograph watches are also supplied with nylon NATO straps, which are decorated with the No. 242 Squadron Leader Pennant. Each AVI-8 Bader Chronograph Limited Edition has a uniquely numbered caseback, which is also engraved with the Douglas Bader Foundation logo. There are 726 pieces in total (3×242), available now for the price of $285. An international two-year warranty is included as standard. To learn more about the brand and this collaboration, check out avi-8.co.uk.