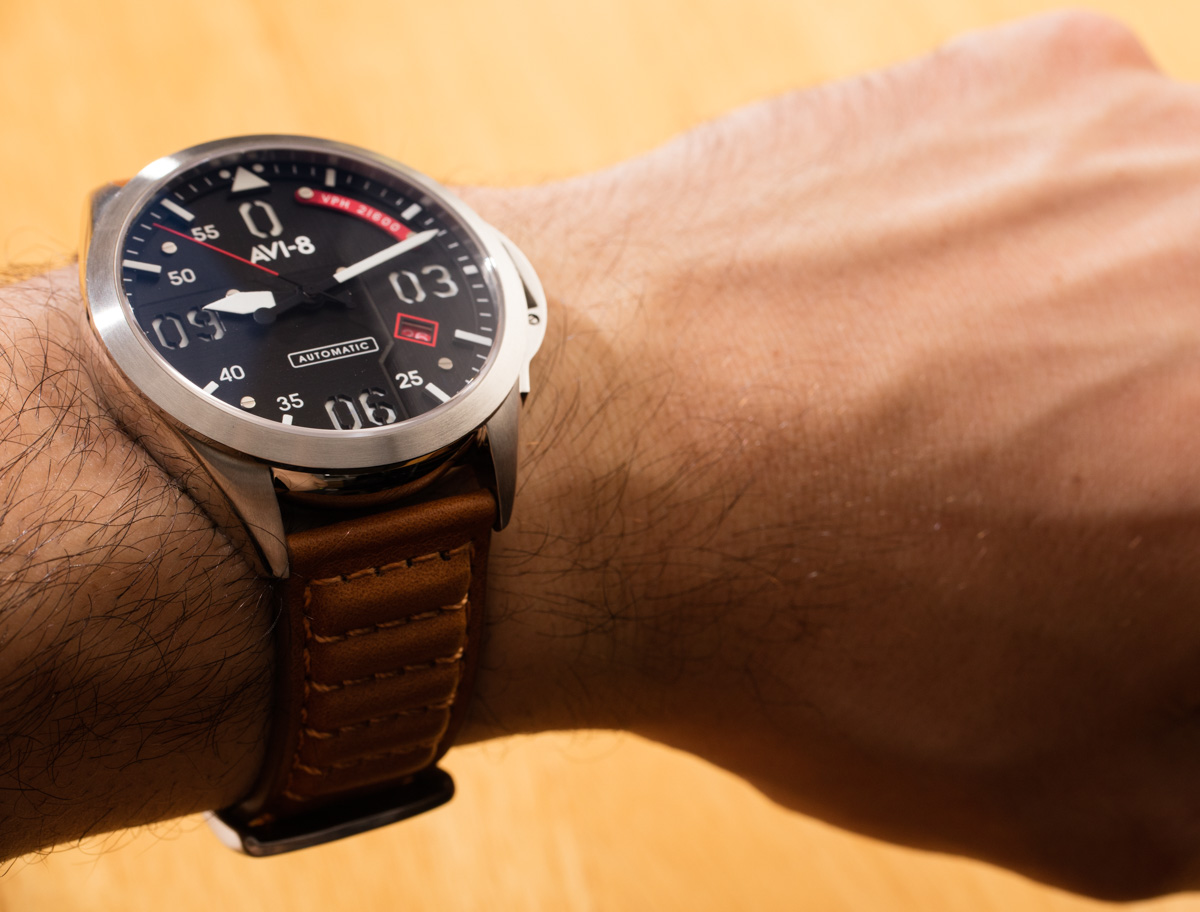 In the modern wristwatch landscape, one of the newer categories of product is the timepiece created for collectors and enthusiasts of timepieces. This is in relatively stark contrast to many historic watch designs that were created mainly to satisfy specific utilitarian purposes. In the 1980s, wristwatches increasingly lost value as a primary source of one’s ability to readily know the current time, and the design or origin of the watch began to have more value to consumers than a watch’s ability to tell the time. Flash forward to today, and you have people who not only practice the art of collecting watches, but also fetishize the art of being a watch collector. A particular category of more novice watch enthusiasts will, no doubt, find pleasure in timepieces designed with their specific needs in mind as new collectors fascinated with both what types of watches are collectible and the traditional sources of watch design. These include “professional” activities such as diving, car racing, and, of course, flying. 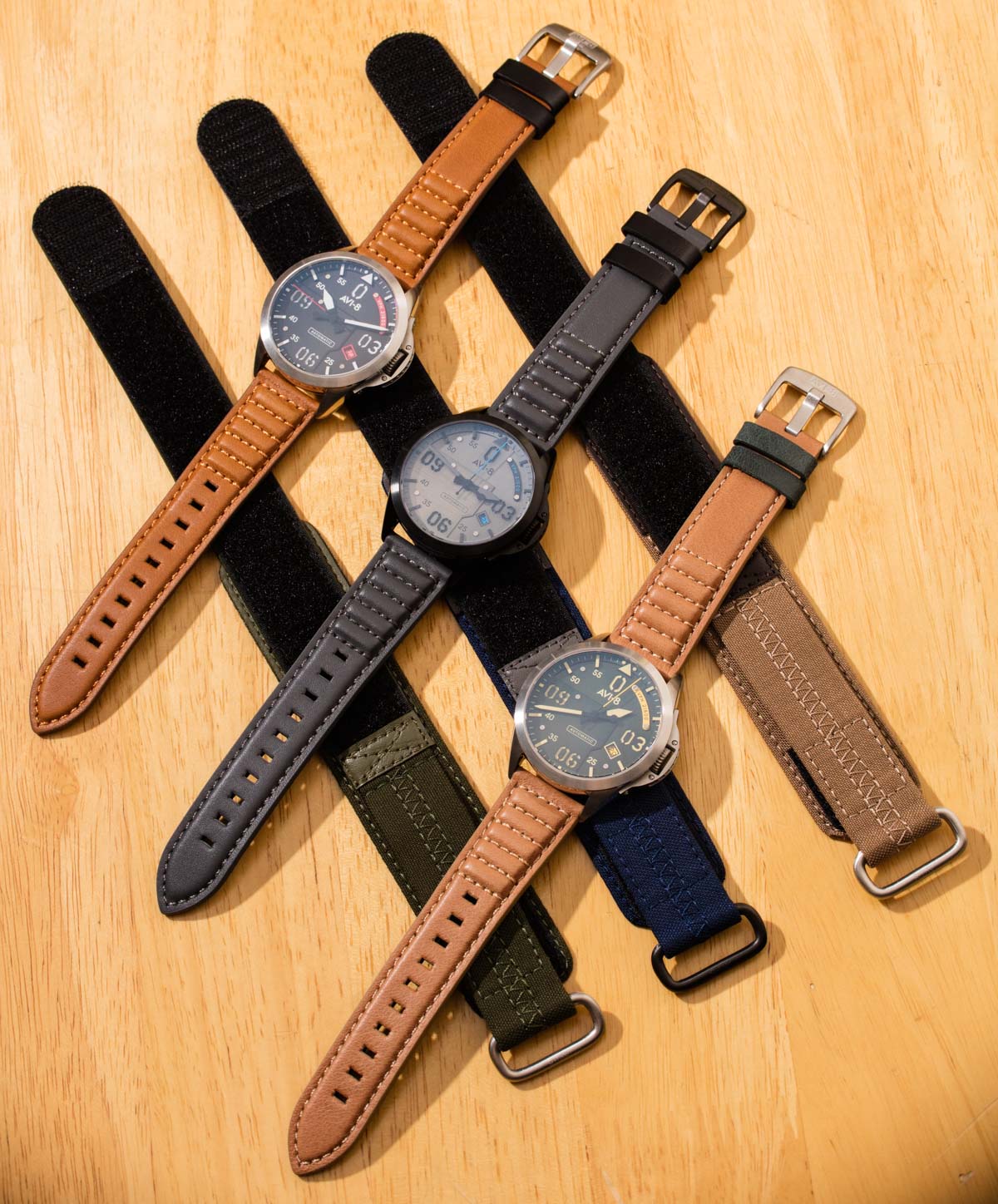 This now brings me to AVI-8‘s latest series of watches know as the AVI-8 P-51 Mustang Bottisham Limited Edition. Three models make up this set of pilot watch/cockpit instrument/P-51 aircraft-inspired timepieces that are an interesting study in appealing to collector tastes. The story begins with AVI-8 pointing out that, during World War II, a group of American-made P-51 Mustang plane squadrons (with British Rolls Royce engine) operated out of the English Royal Air Force’s (RAF) Bottisham airfield. The result is a watch that is heavily inspired by a plane’s instrumentation and also seeks to exist within a world of plausible aviation tool watches that are quite popular with a lot of enthusiasts. Does AVI-8 succeed in this challenging and, some might argue, Quixotic creative journey?

Fun to look at and meticulously detailed, the AVI-8 P-51 Mustang watches succeed in being true exemplars of what the designers sought to create — only I don’t know if they consciously understood the work they were performing. You see, AVI-8 is in the privileged position of being able to design more or less what they like with the rapid flexibility of quality Asian manufacturing. What AVI-8 (and the brands like it) don’t have is a rule book for how to design watches that will appeal to customers. What you see here in the AVI-8 P-51 Mustang Bottisham Limited Edition watches is a valiant attempt to be original in terms of design — in a normally rather unoriginal space (of pilot watches). 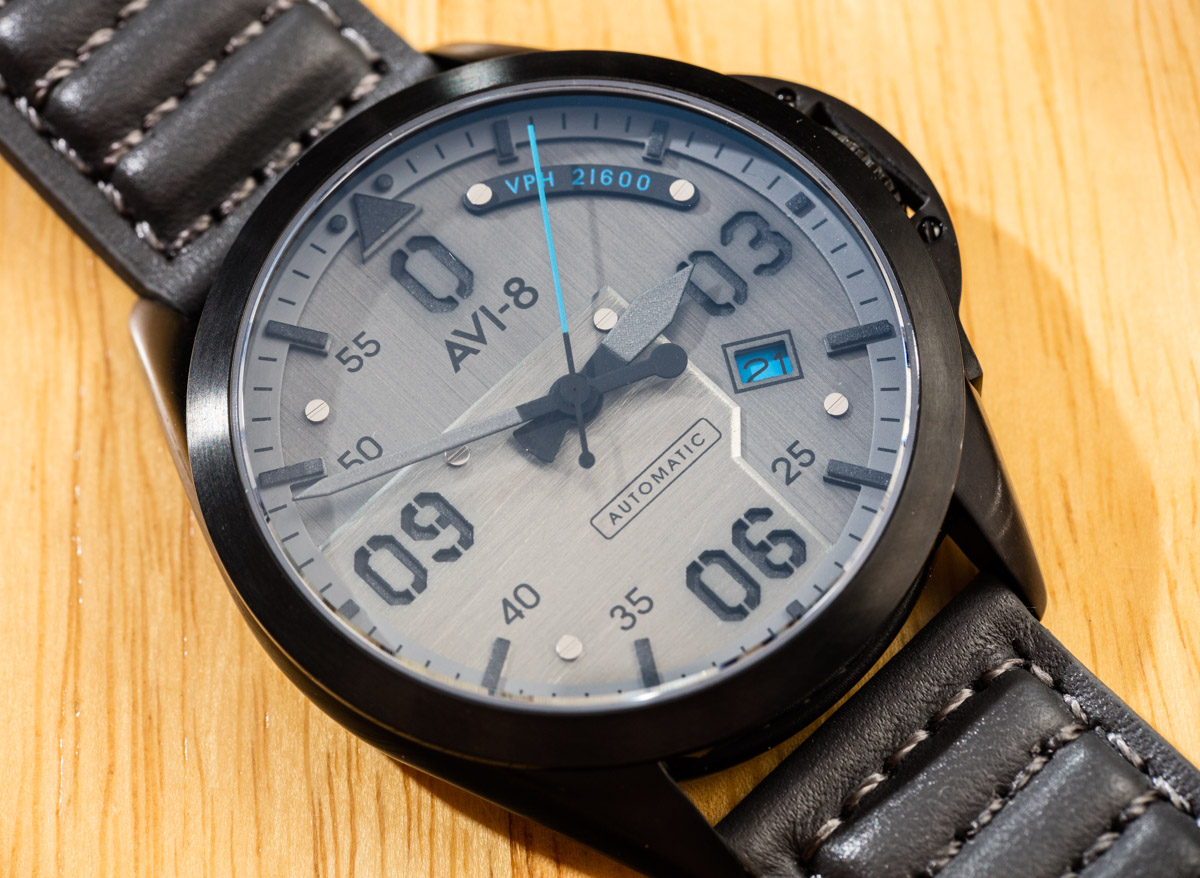 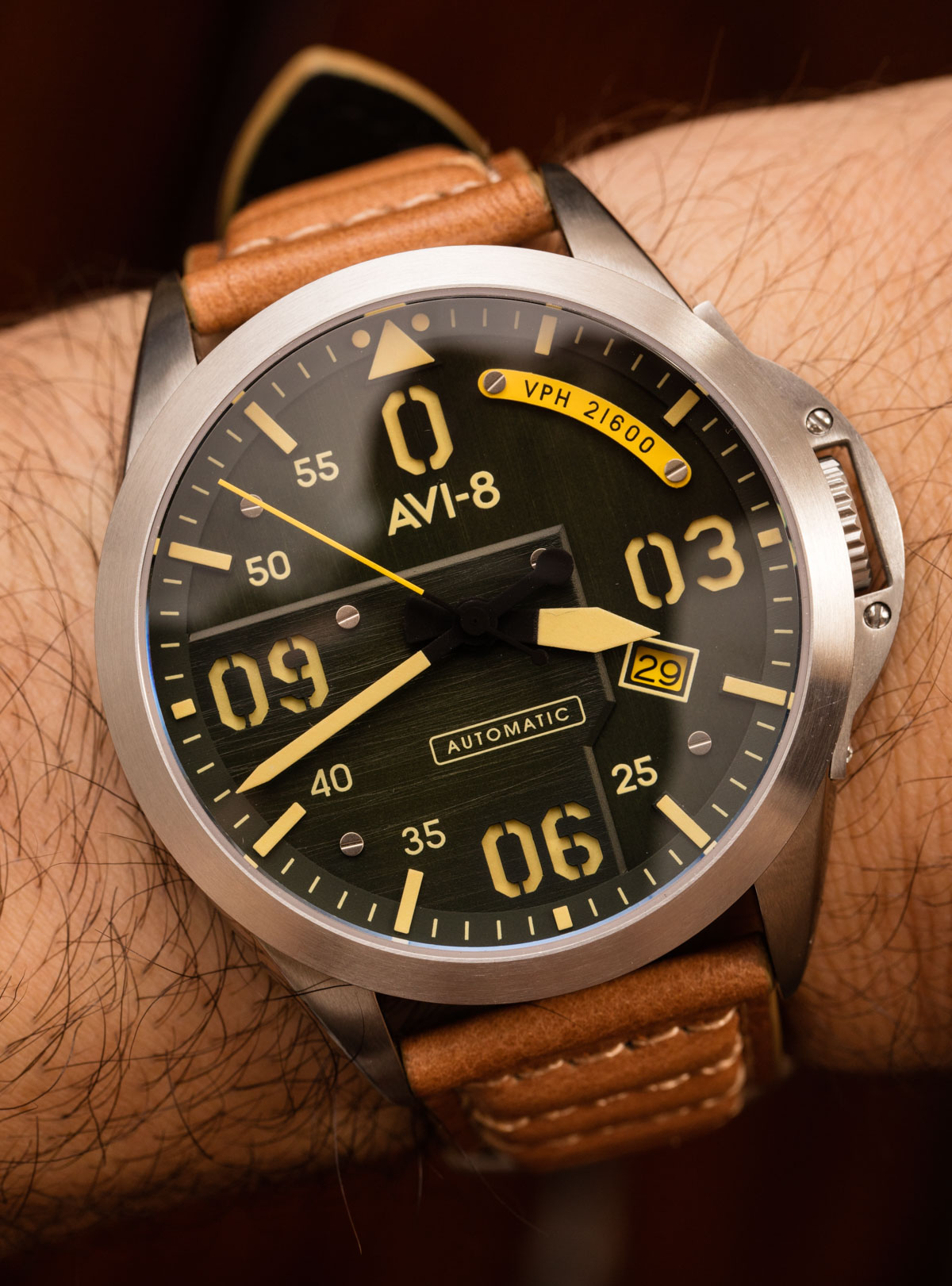 AVI-8 isn’t aware of current problems aviators need fixing to include in new products, nor is the fact that there is a thriving population of new P-51 Mustang plans and pilots to observe and be inspired by. AVI-8 is trying to celebrate an authentic part of military and aviation history with a product that it turned into a wearable, mature men’s toy.

Collector’s watches are toys, and they should be celebrated as such. Some of the first modern collector’s watches I can think of are those produced by the great Alain Silberstein during the 1990s. With colorful shapes and a sometimes cartoonish approach to otherwise serious watch design, he demonstrated how a timepiece can be both a serious instrument and a wearable toy. A couple of years ago, I reviewed the Azimuth Mr. Roboto, another example of an excellent watch toy. It is very possible to argue that Richard Mille and MB&F (not to mention Christophe Claret or Urwerk) watches are also toys. They are inspired by something emotional for the wearer and are fun to play with on the wrist. 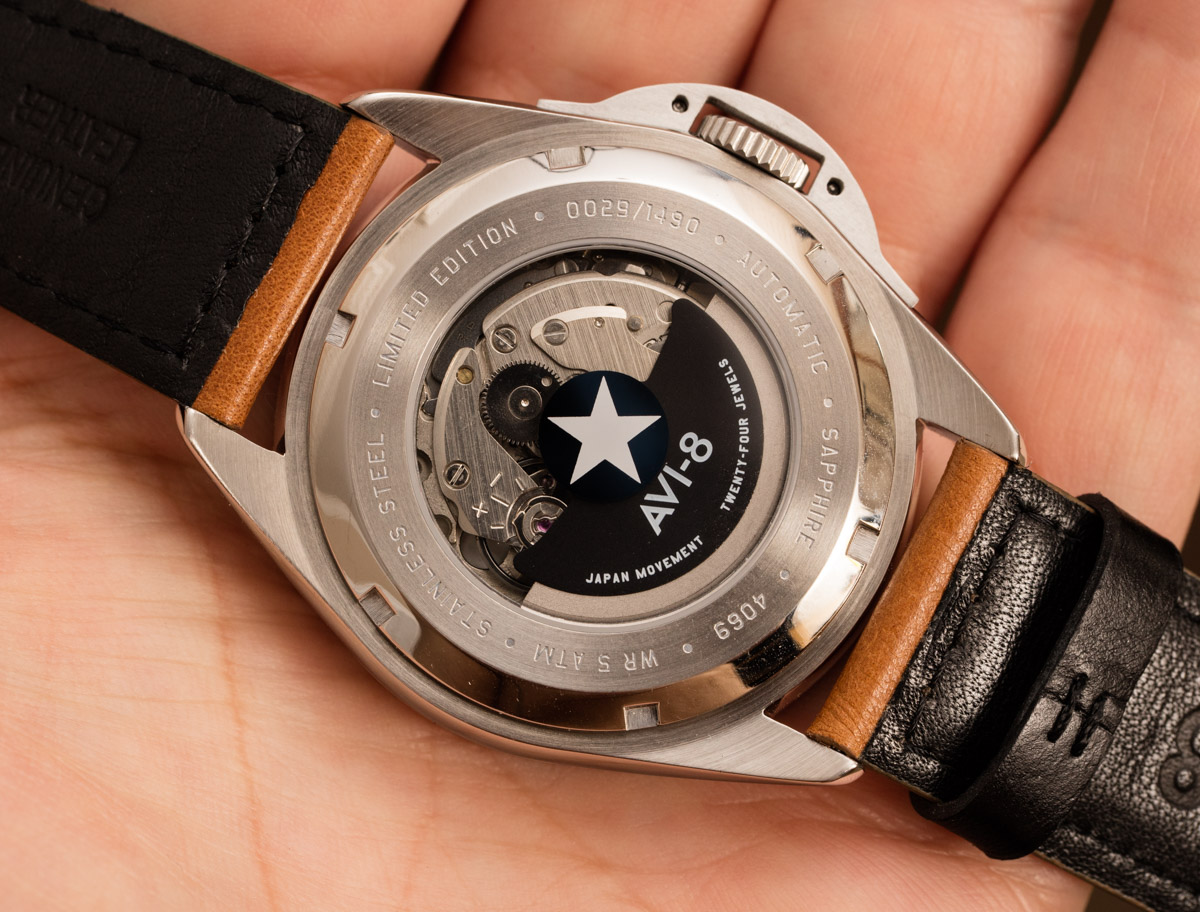 Collector’s watches can be high-end lifestyle status symbols, but they certainly don’t have to be. AVI-8 is one of a few companies I like to follow who are trying to blur the lines between handsome men’s watches and collector’s toy watches. The P-51 Mustang Bottisham straddles these lines, trying to be visually provocative and edgy while also being grounded in traditional principles of watch-dial design.

Dial depth is impressive, and this is clearly where AVI-8 put the majority of its effort. Different layers and finishes make up the various surfaces, and you see visual inspiration from both the cockpit of the P-51 as well as the fuselage of the Mustang. The balanced asymmetry is certainly eye-catching but it is all for show. This is, perhaps, most epitomized in the “VPH 21600” plaque on the dial, which is a reference to a detail about the mechanical movement inside the watch. A tab like this existed on a cockpit instrument gauge from the plane, and it made its way onto the dial with the most relevant text the designer could think of. 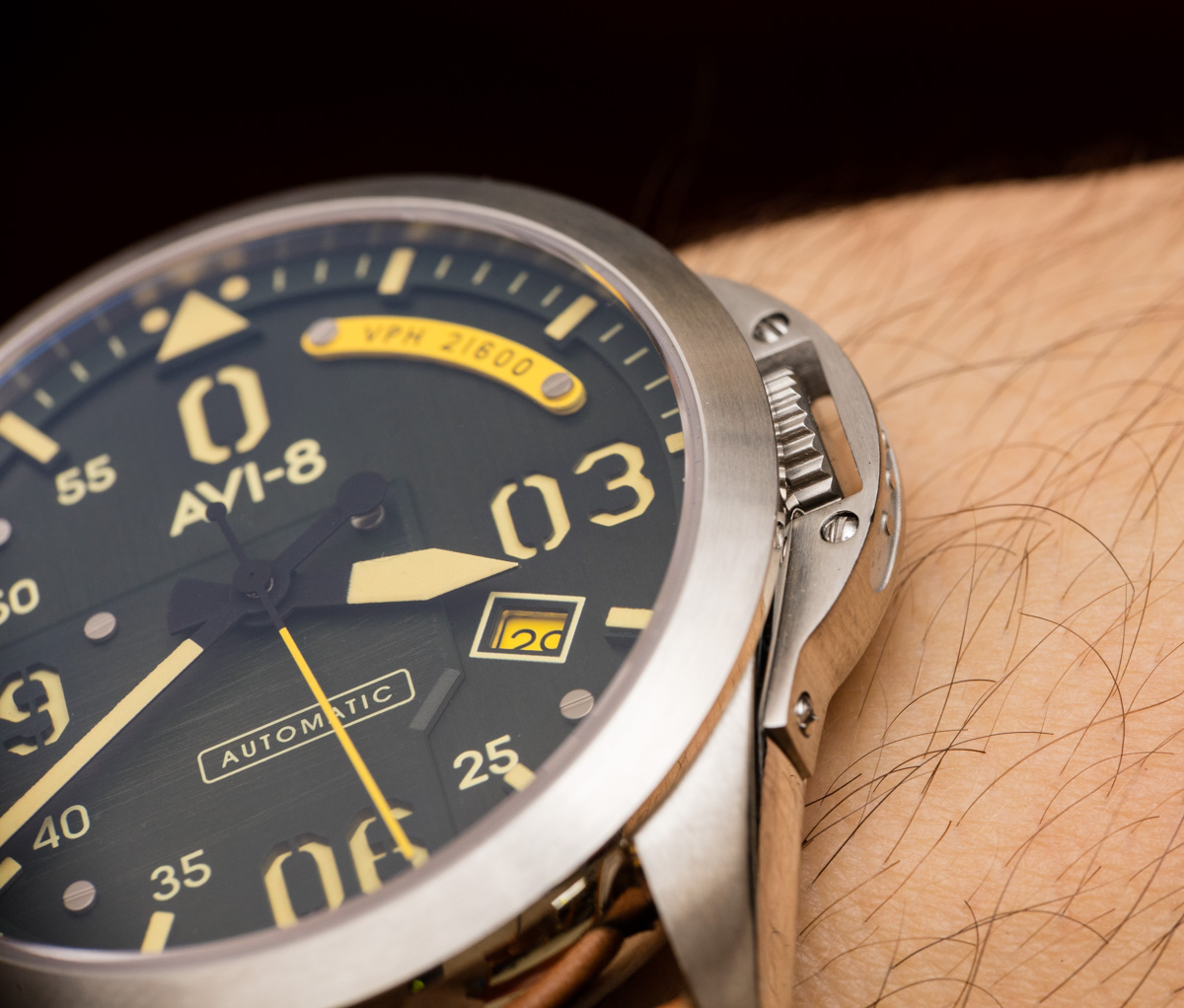 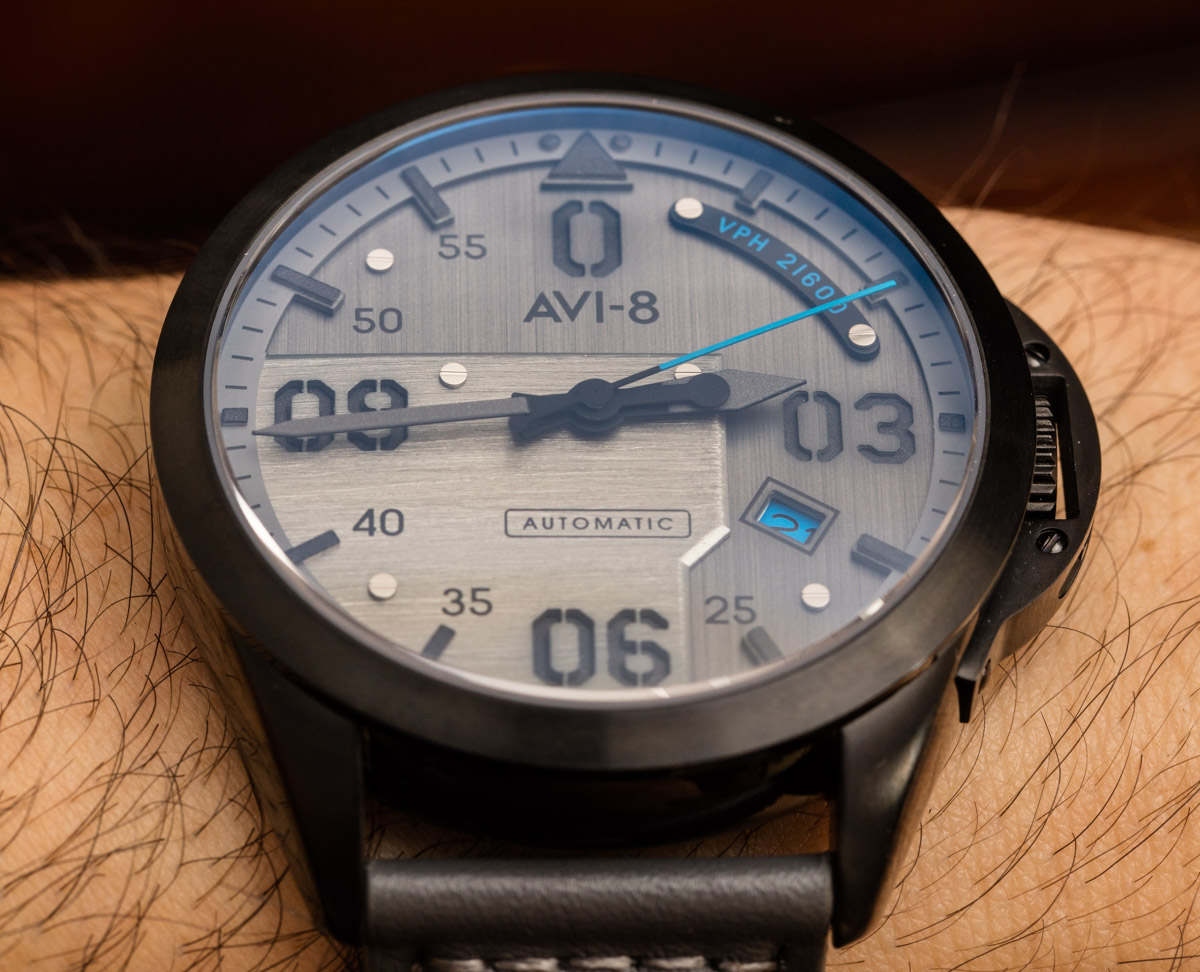 Who will appreciate this detail? Not seasoned watch collectors, who have gotten over the game of remembering all the numbers and metrics associated with popular mechanical watch movements. That said, collectors just coming into the watch hobby will no doubt smile at the watch’s recognition that talking about these details is intellectually important to them at such a stage in their collecting. Tool watch purists will complain all over the P-51 Mustang Bottisham watches that “this” doesn’t make sense, and “that” is just a cosmetic element. Sure enough, the guard over the crown with a few circles cut out of it (inspired by the plane engine’s exhaust ports) doesn’t in any way help the product actually be a better watch — though its Panerai-style design is, no doubt, included in order to give the watch more personality (or familiarity, depending on how you look at it).

The three colorways of the AVI-8 P-51 Mustang Bottisham Limited-Edition watch are the ref. AV-4069-01 with a black and white dial, the AV-4069-02 with the green dial, and AV-4069-03 with the gray dial and case. Each is fashionable, though the first version with the black and white dial is the most legible. AVI-8 includes a quilted leather strap and a sort of aviator/astronaut-style Velcro strap that seems like a fun idea that leaves out a lot of practicality.

Watch case construction is good, along with high-quality materials such as a sapphire crystal and 316L stainless steel case. Inside the watch is a Japanese Seiko Instruments NH35 automatic that operates at 3Hz with about two days of power reserve. I think an upgraded movement would have made this product just a bit more desirable to the target demographic. Then again, this is still a lot of watch for the money, given all the detailing involved. At least there is a display caseback with a spirited-looking automatic rotor design. 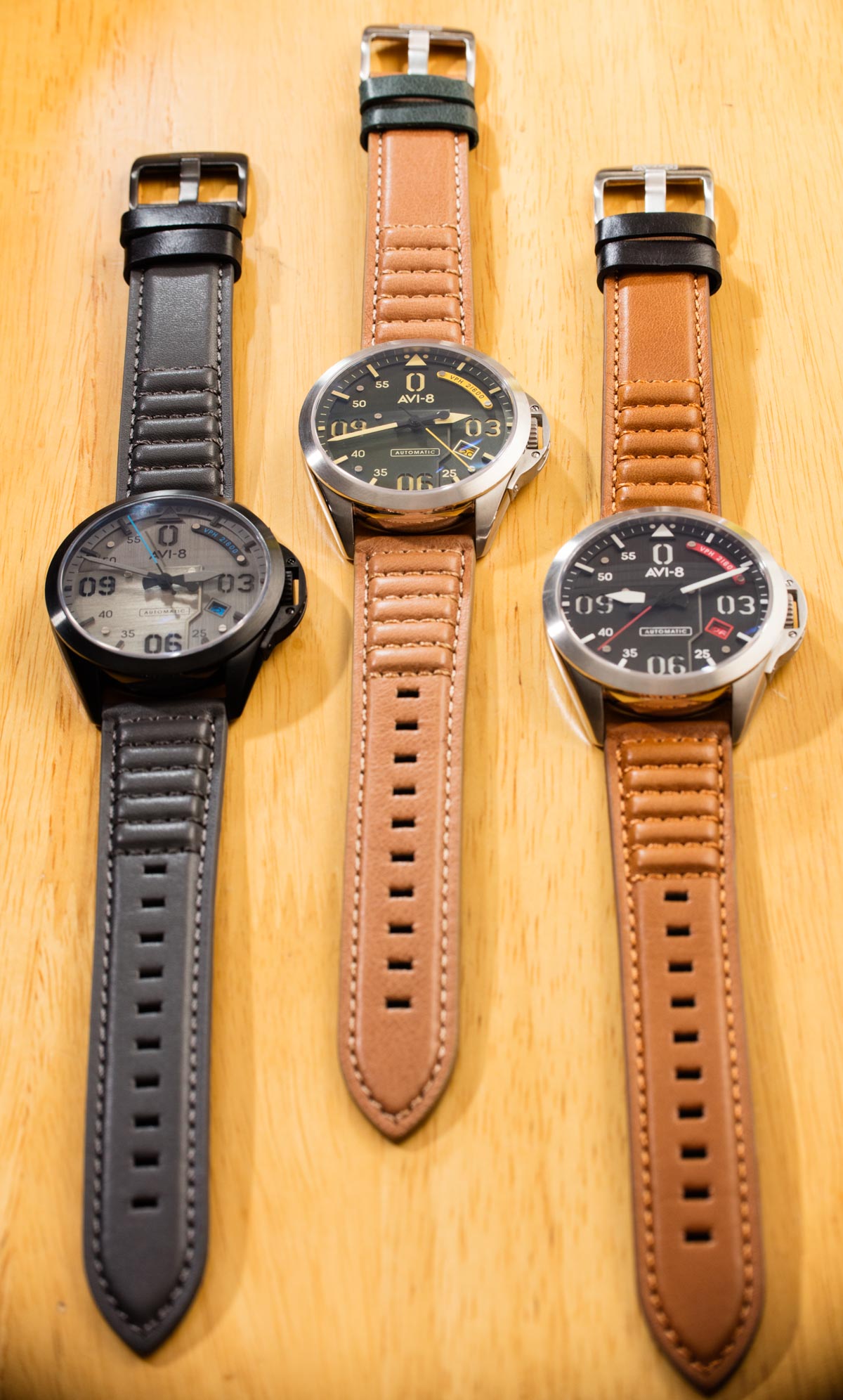 On the wrist, the 43mm-wide case (13mm-thick and water resistant to 50 meters) is comfortable and I’d probably opt for a more traditional pilot watch strap to be attached to it. The padded look is supposed to mimic the seats of the plane, but for that to better happen, the strap should have been made out of green fabric (which would have been cool). The Panerai-style crown guard is fine, but I think a watch inspired by an iconic plane such as the P-51 could have done better in this department, or at least used a traditional-style pilot watch crown.

From a fashion perspective, these are some of the better AVI-8 watches out there for those looking to combine some classic military aesthetic into an urban look. As a traditional or vintage-style pilot watch, the P-51 Mustang Bottisham is not that, despite the fact that it is inspired by a historic airplane. It is an attempt at creating a fashionable toy, and in that it succeeds for a particular audience. AVI-8 is certainly aware of that niche category, as evidenced by its decision to produce each as a limited edition of 1,490 pieces (which is actually a fair number of total units). Price for the AVI-8 P-51 Mustang Bottisham Automatic Limited Edition AV-4069 watch is between $380 – $400 USD depending on the model. See more at the AVI-8 website here.