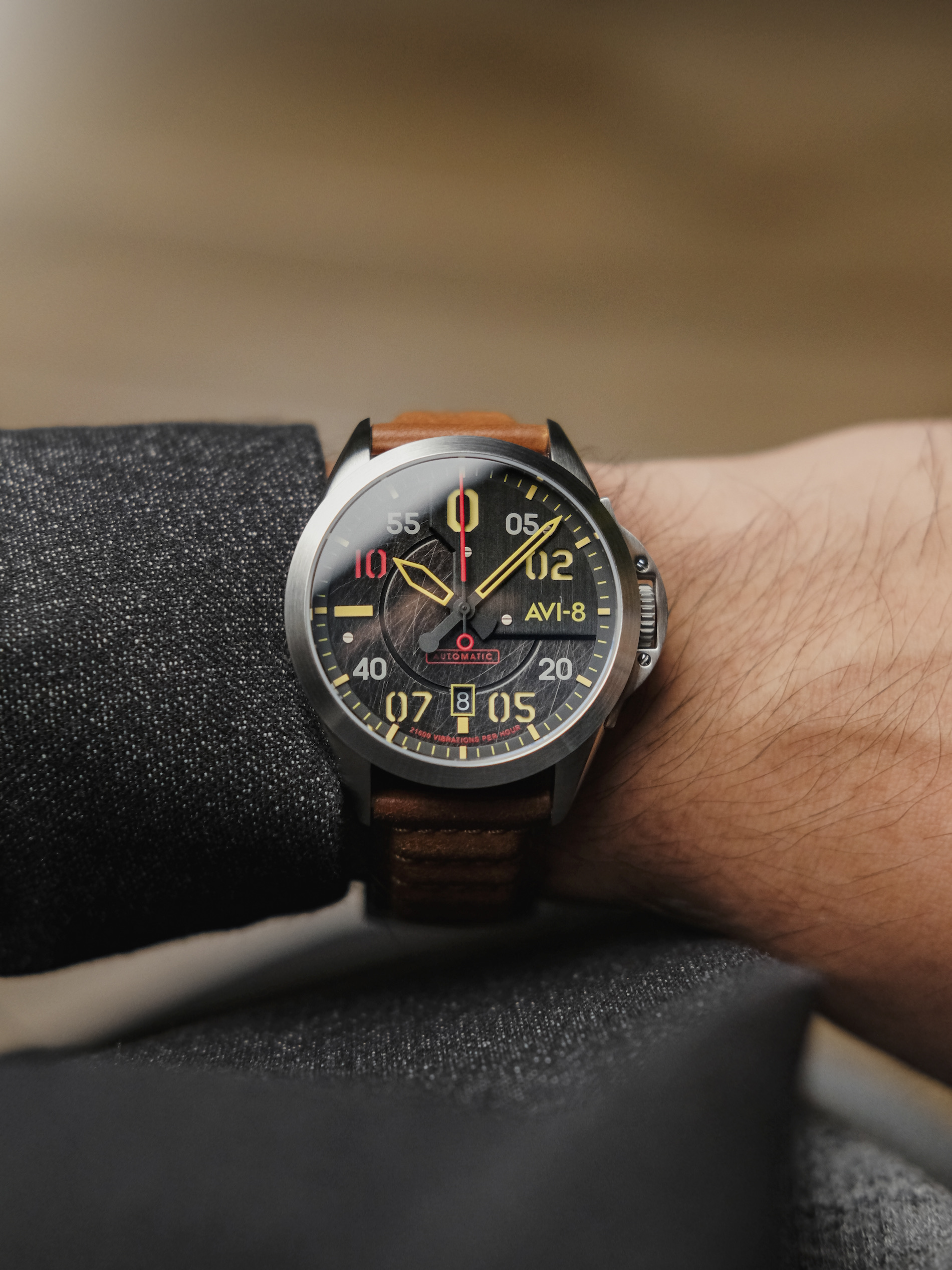 Watch brand AVI-8 is more than just inspired by aviation — the minds behind the company are driven by a passion for all things aviation, from the planes to the people, and, most importantly, the history. Each line in the brand’s catalog is named for a historically significant aircraft: Spitfire, Hawker Harrier, Hawker Hunter, Hawker Hurricane, and the indomitable P-51 Mustang. In its latest release, the P-51 Mustang Hitchcock Automatic, the brand pays tribute to a truly remarkable man who was instrumental in the creation of the P-51 Mustang, Tommy Hitchcock, Jr. 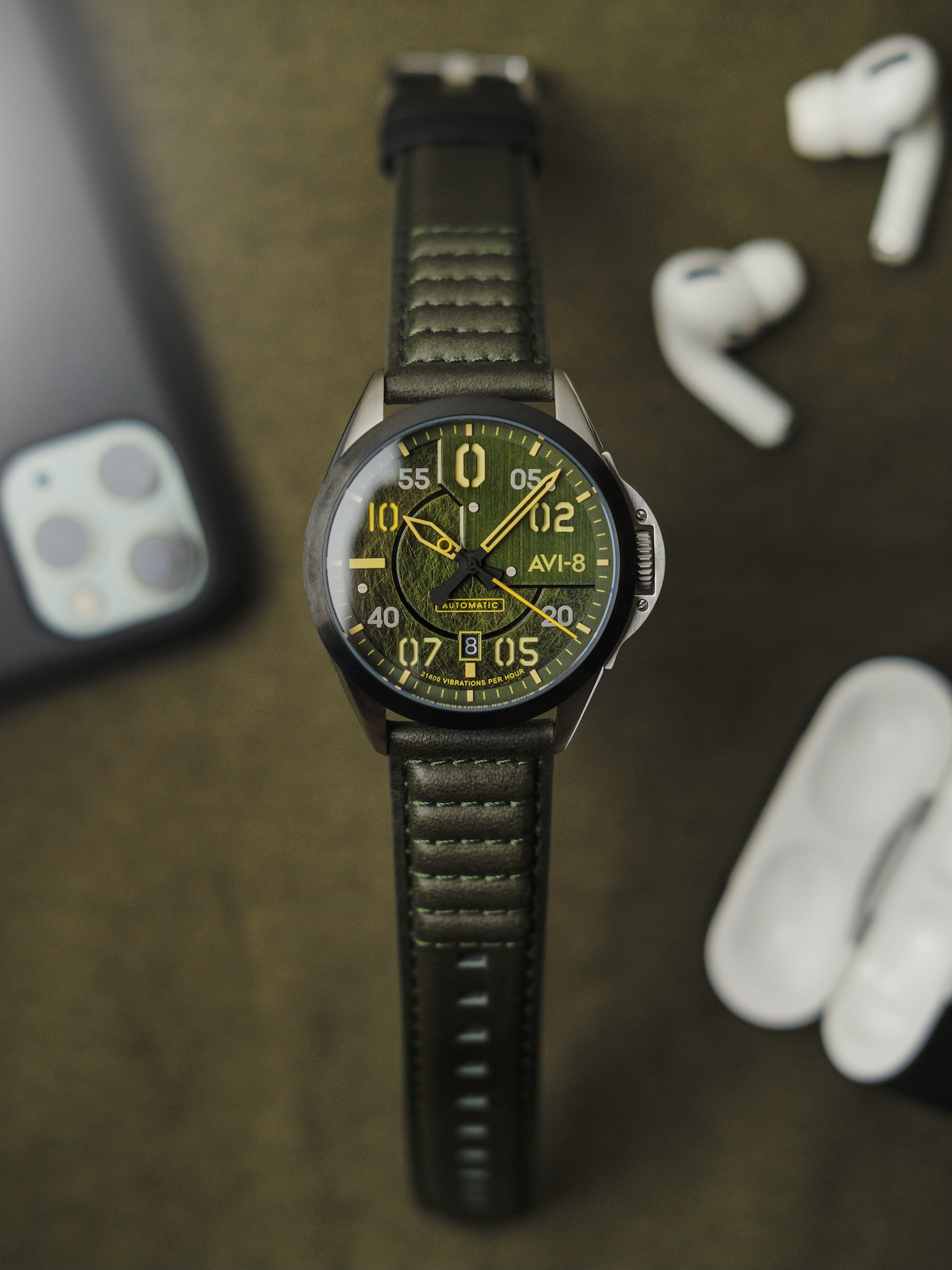 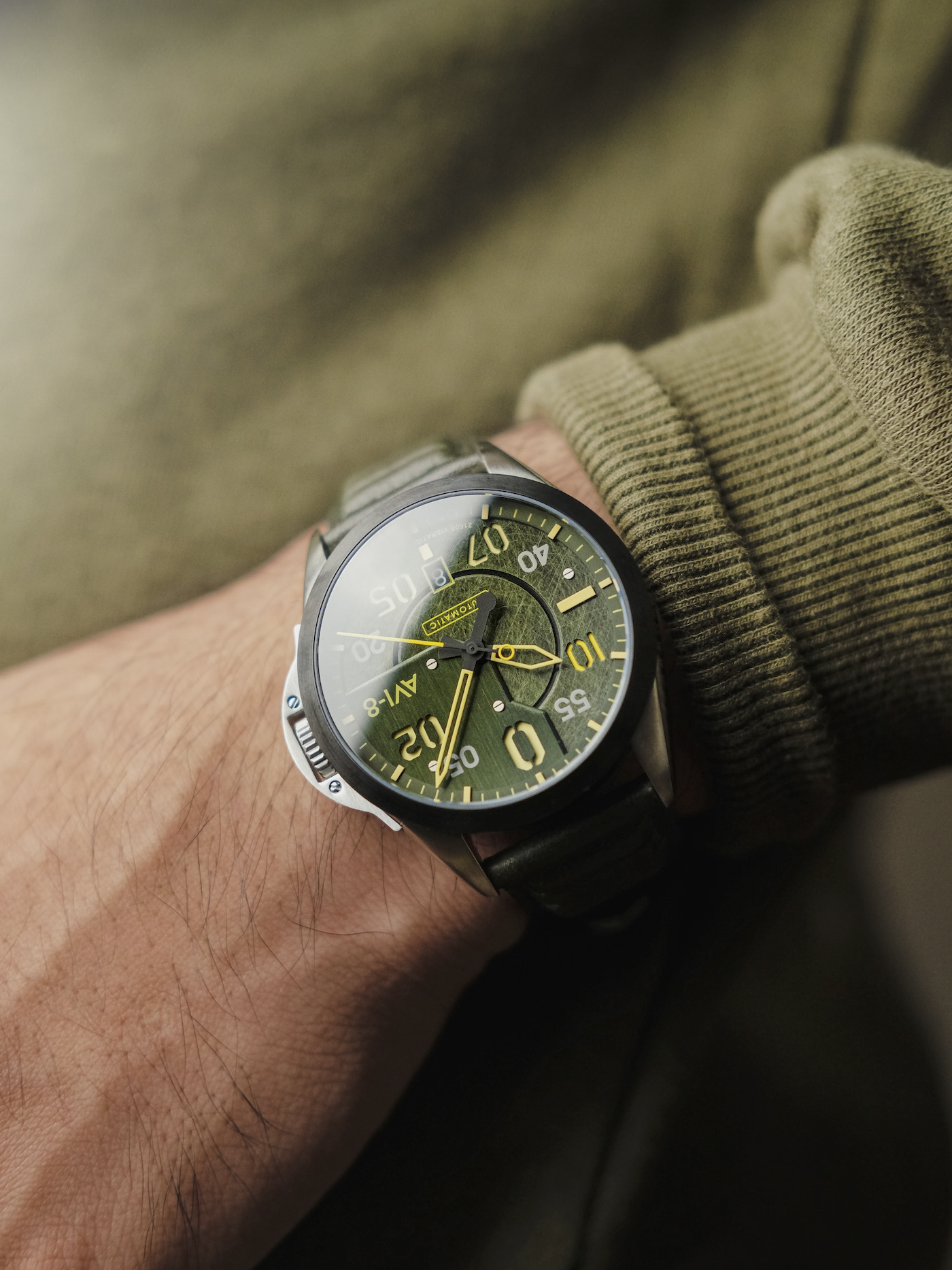 Born at the dawn of the 20th century, Hitchcock’s biography reads like fiction. A multi-sport athlete and school president, Hitchcock left school to join the Lafayette Flying Corps in France during World War I where he was shot down, captured by the Germans, then escaped by jumping from a train and hiking for eight nights behind enemy lines, covering over 100 miles until reaching safety in Switzerland. 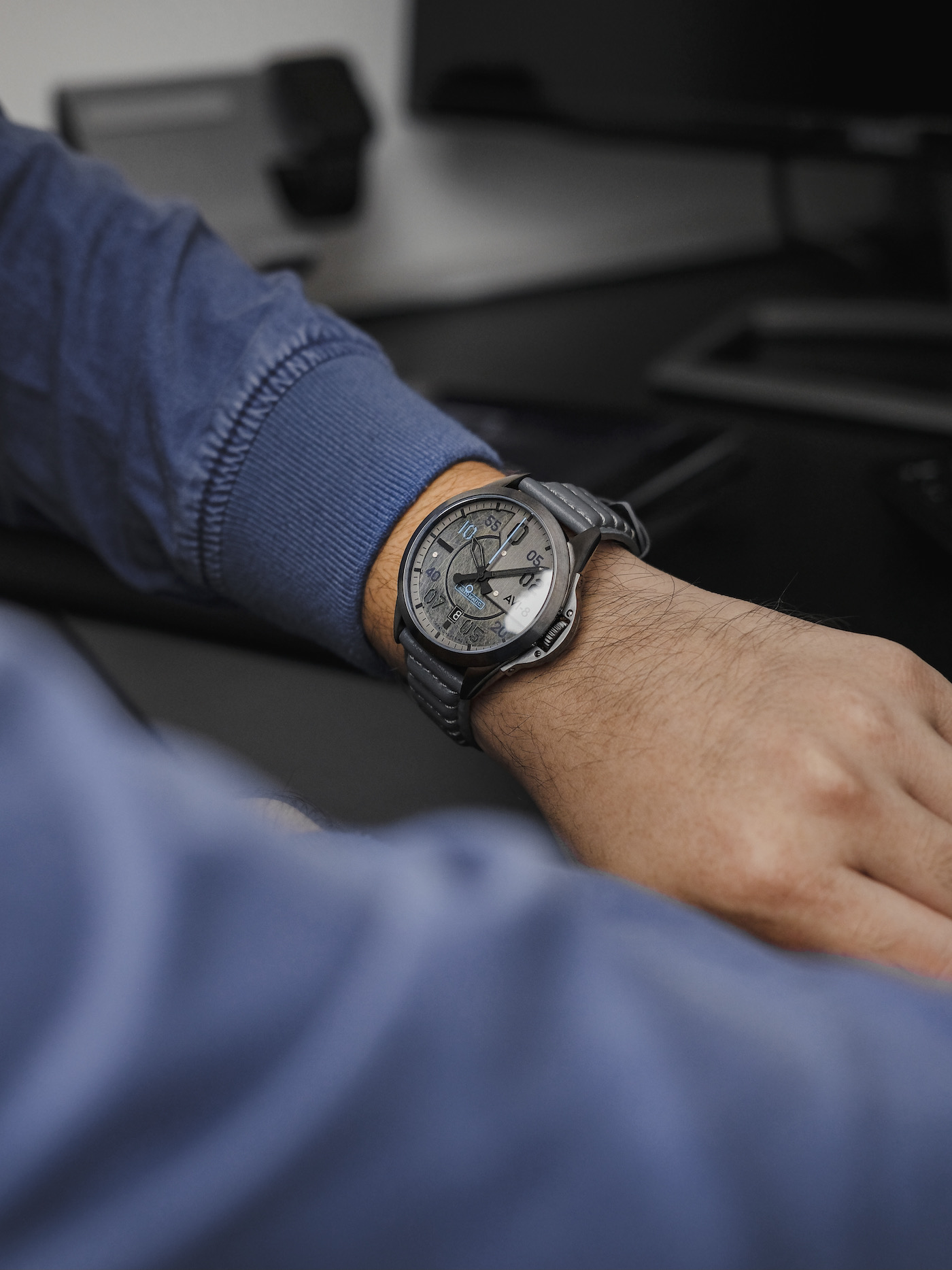 Next came studies at Harvard University and Oxford, followed by leading the U.S. national polo team to a win in the 1921 International Polo Cup (and many other accolades in the sport). All that, of course, was a prelude to his work on the development of the P-51 Mustang while serving as a lieutenant colonel in the U.S. Army Air Forces in World War II. Sadly, he died in 1944 in the very plane he helped develop. Oh, and if Hitchcock seems a bit familiar, F. Scott Fitzgerald modelled the character of Tom Buchanan after him in The Great Gatsby. What a life! 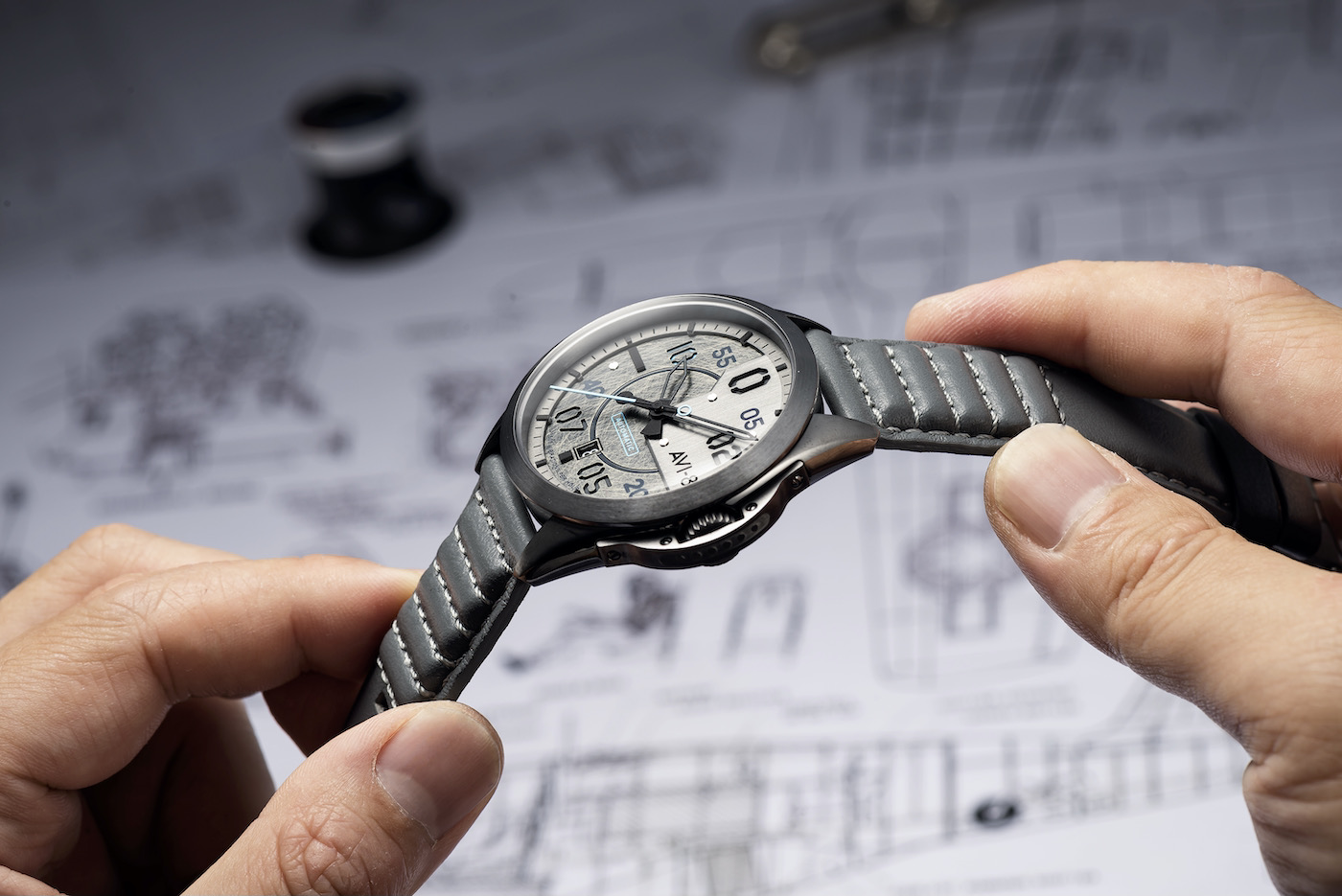 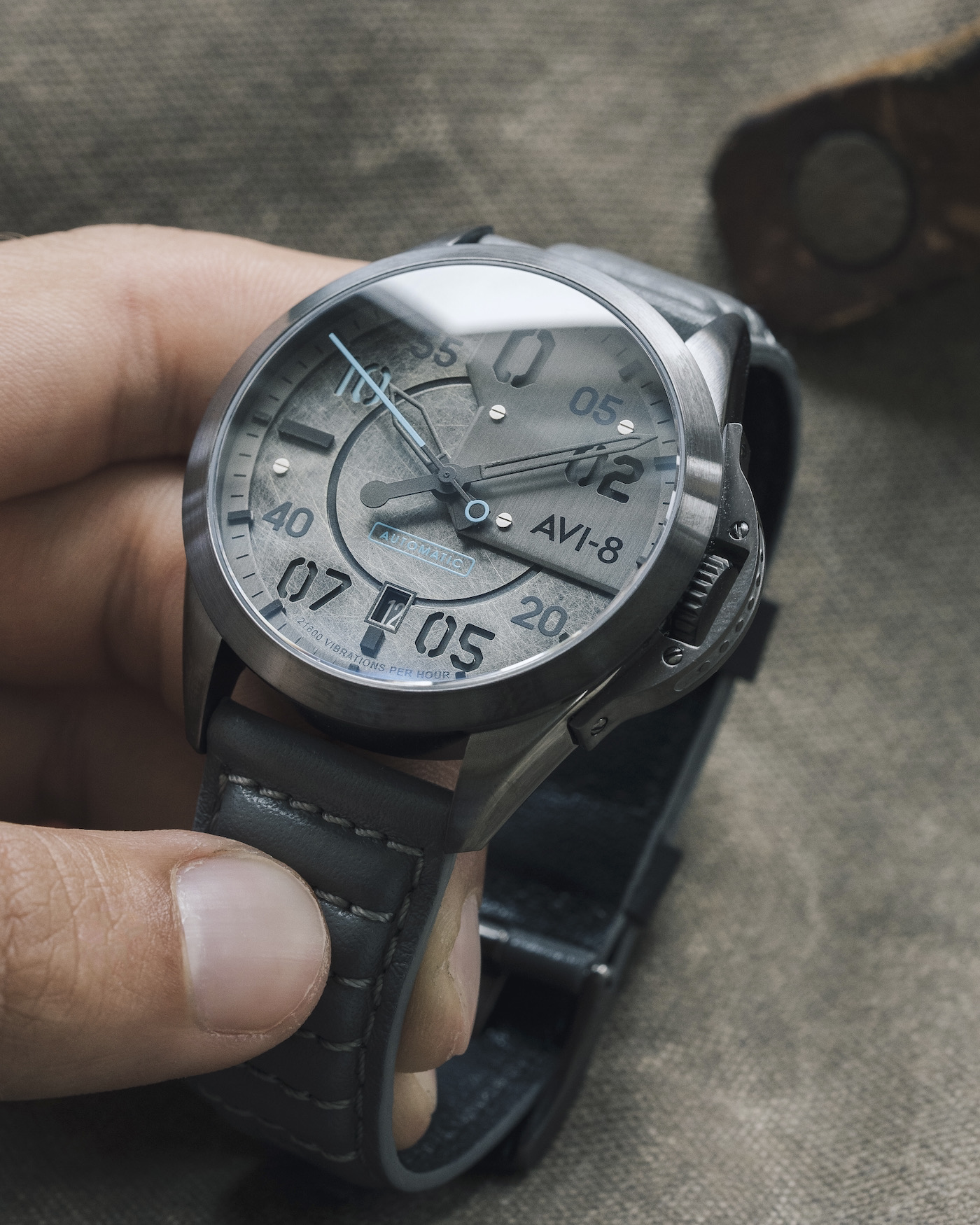 As impressive as Hitchcock’s life was, let’s not forget about the legacy of the P-51 Mustang, an aircraft that is easily one of the most iconic planes ever flown by the U.S. Air Force. These were the fighters that escorted bombers in raids over Germany during World War II and reportedly downed nearly 5,000 enemy aircraft. To say they’ve earned their place in aviation history would be a gross understatement. Paying tribute to the legacy of this fighter, AVI-8 developed a line of watches designed as an homage to the P-51 Mustang. Like the rest of the P-51 Mustang line, the Hitchcock Automatic shares the same case and design language. The 43mm case features a crown guard that evokes the engine exhausts of the P-51. The result is a case and crown design that is not only attractive and comfortable but also highly functional in protecting the crown from inadvertent knocks. Those smooth lines carry on through the mid-case and lugs — sleek and elegant, but undeniably aggressive. 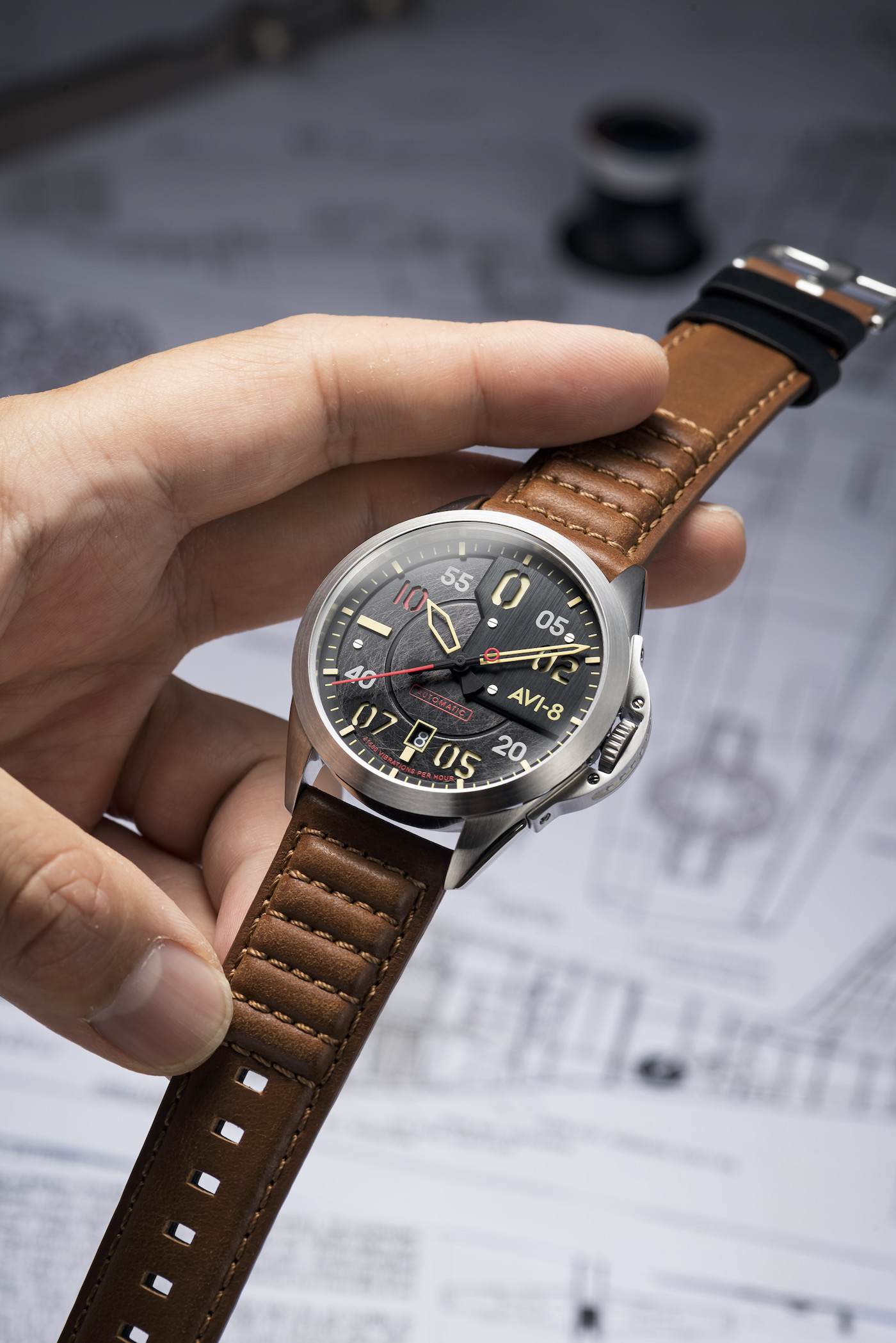 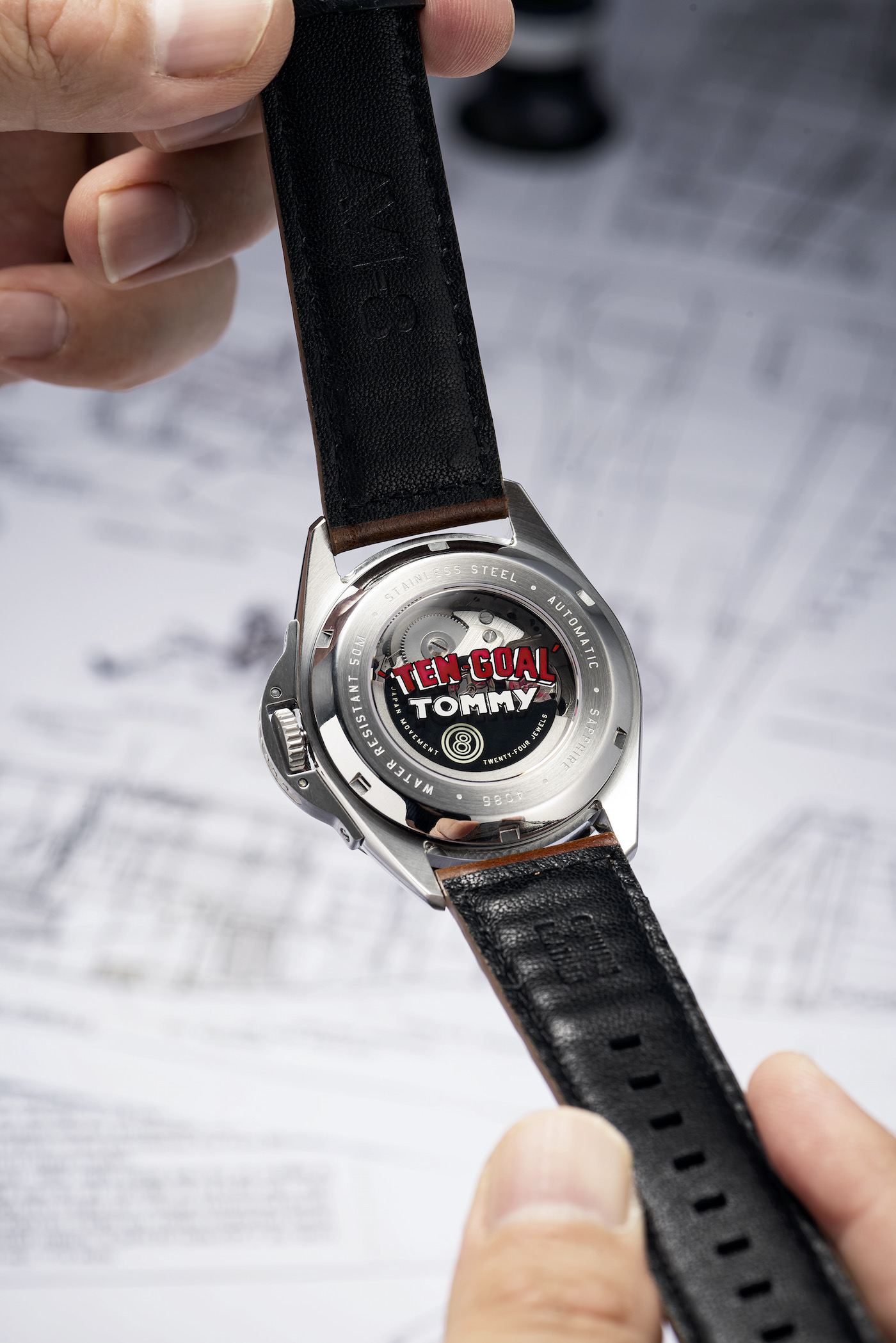 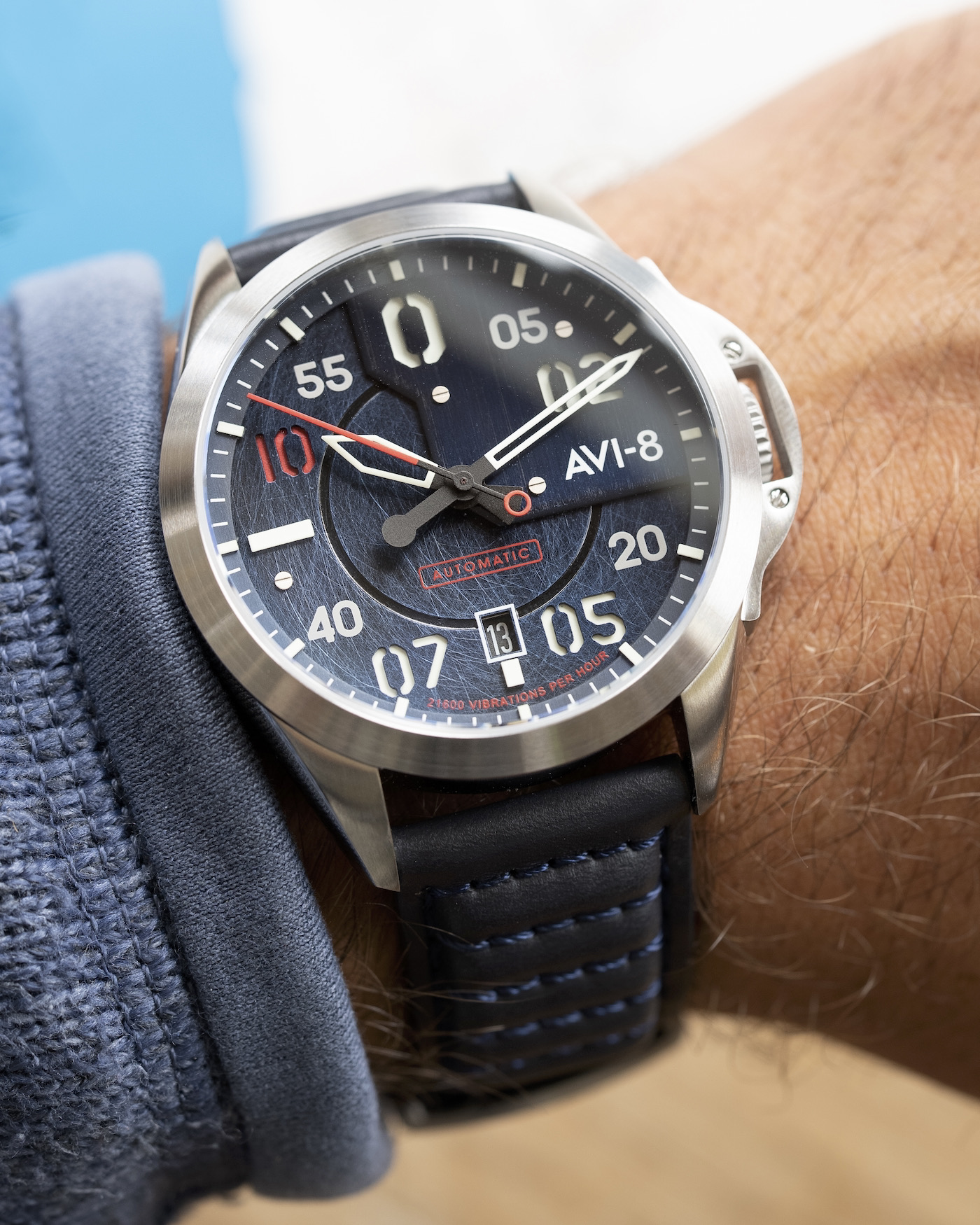 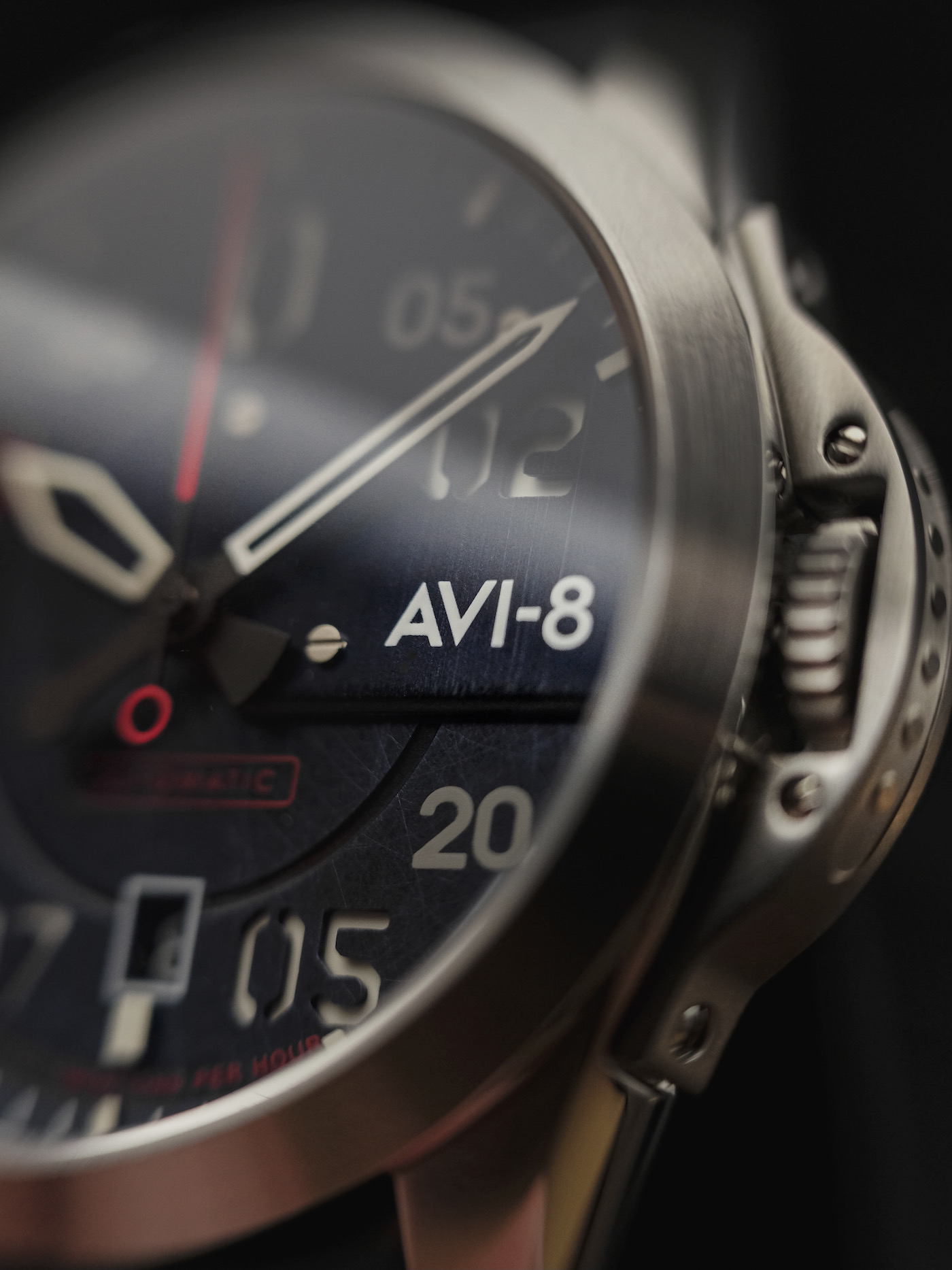 Powering the P-51 Mustang Hitchcock Automatic is the tried-and-true Seiko NH35 automatic movement visible beneath an exhibition caseback. Boldly adorned on the crystal are the words “Ten Goal Tommy,” a moniker bestowed on Hitchcock in reference to his 10-goal handicap in polo. 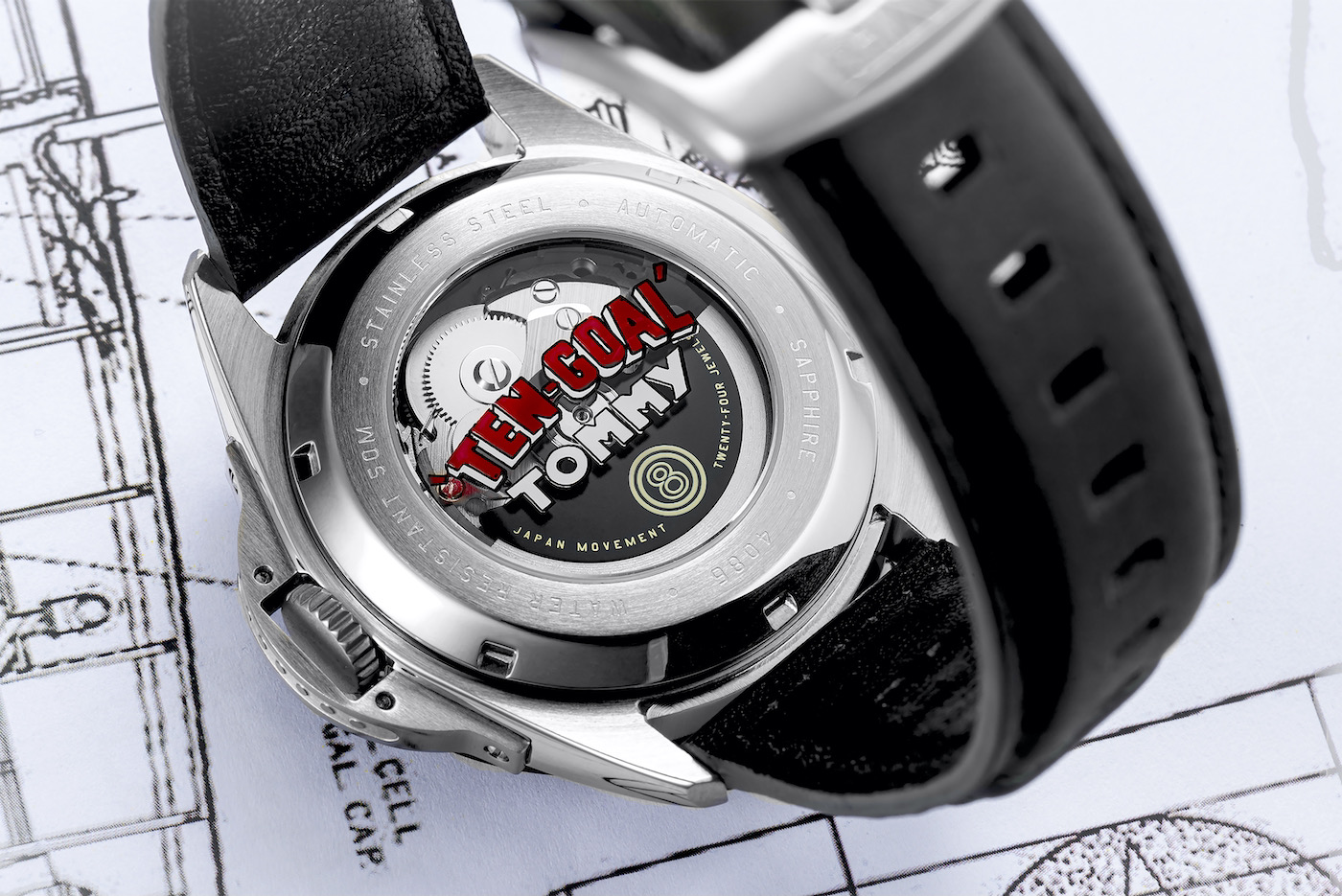 Rounding out the package is a beautifully padded genuine leather strap modeled after the design of the P-51 Mustang’s seats. Each colorway is fitted with a strap to complement the tones of the dial and case. 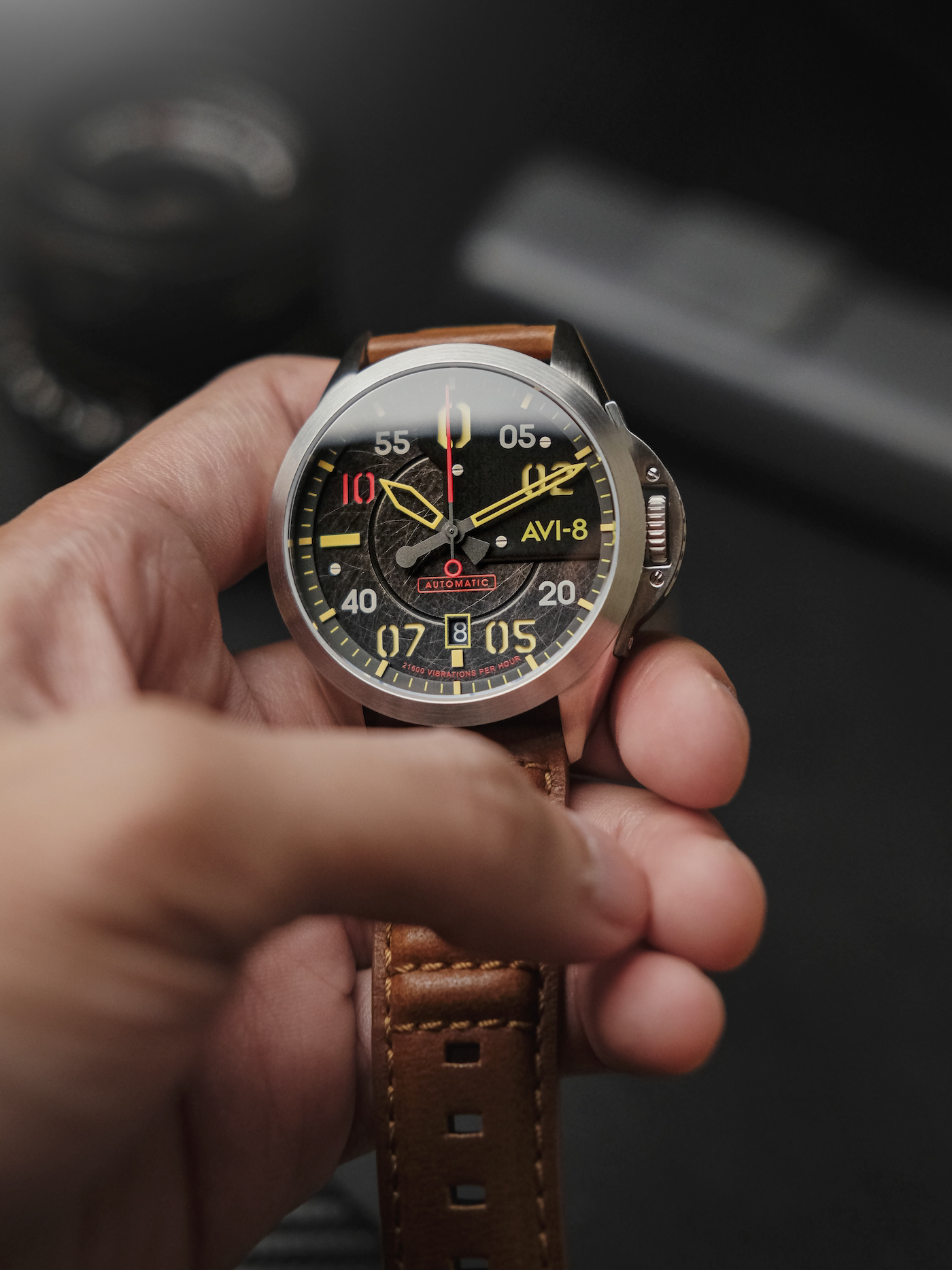 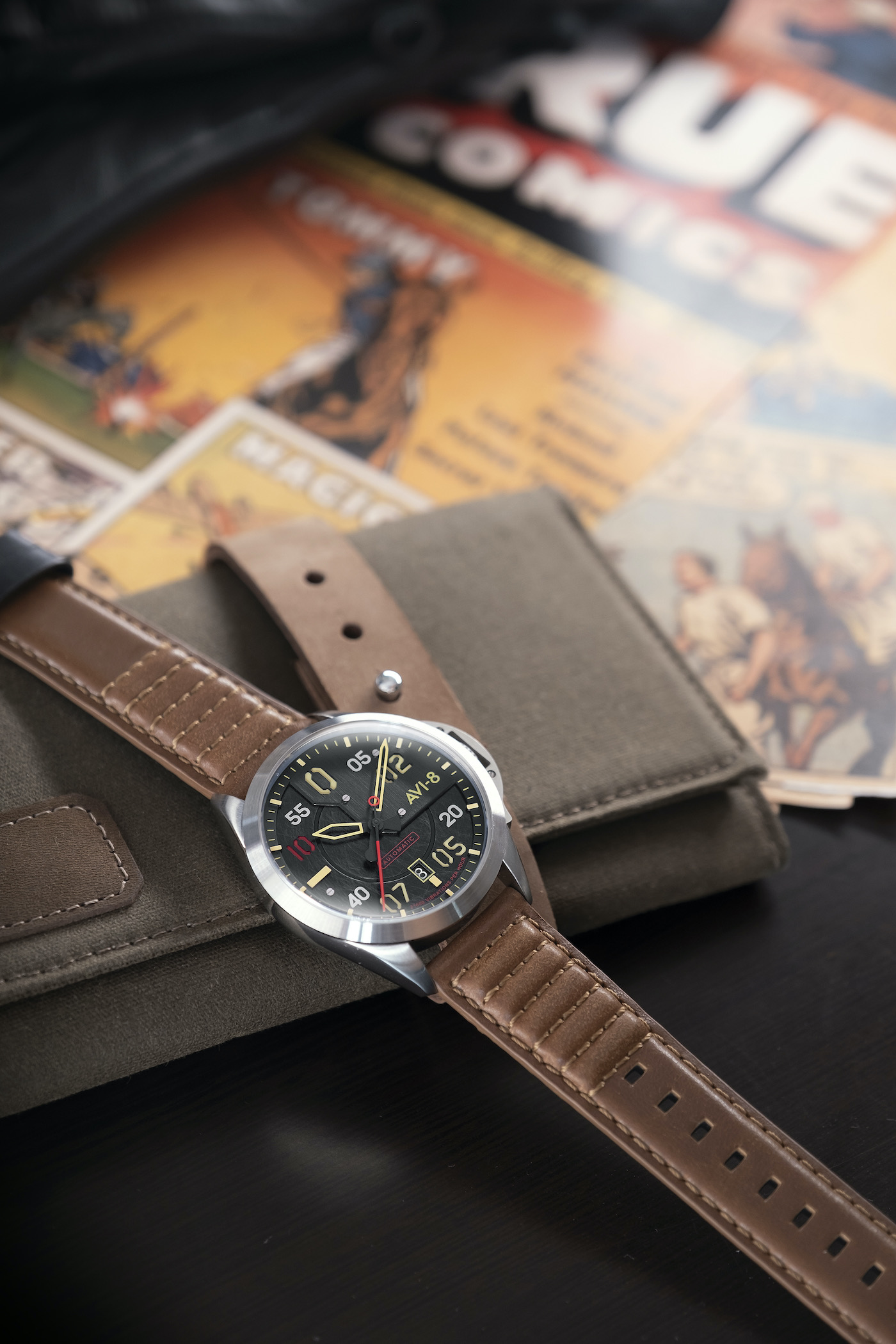