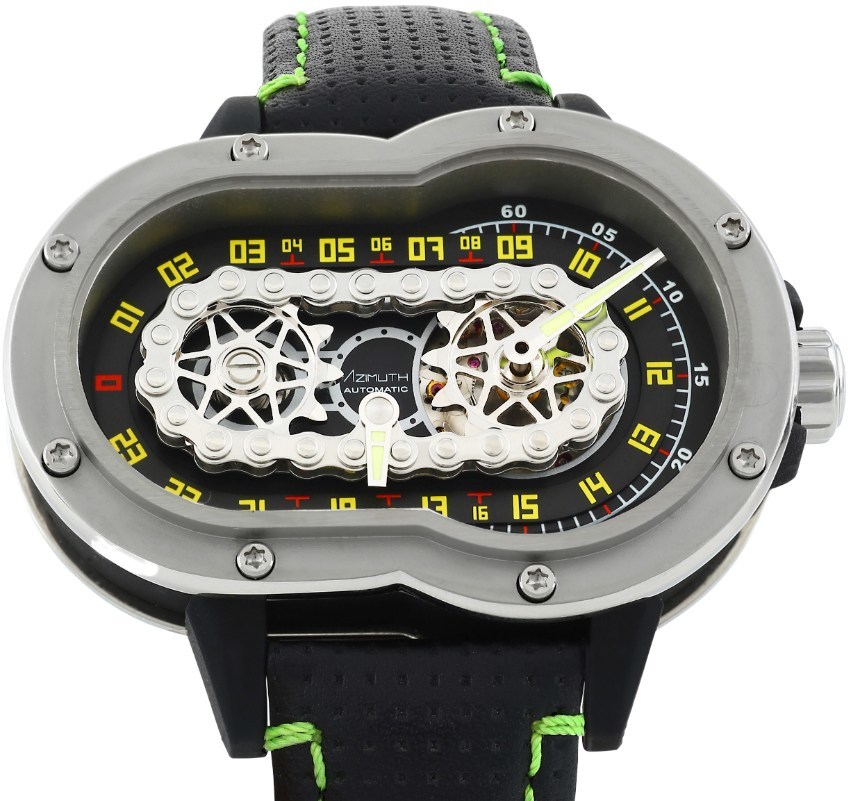 Azimuth is a Biel, Switzerland-based indie brand committed to realizing genuinely interesting, out-of-the-box concepts through highly unusual case designs and modified base movements with modules. More often than not, such an avant-garde take on wristwatches results in stratospheric prices; Azimuth, on the other hand, also strives for accessibility – and all this is why it’s always fascinating to see what Azimuth has come up with: their latest creation is the Azimuth SP-1 Crazy Rider. 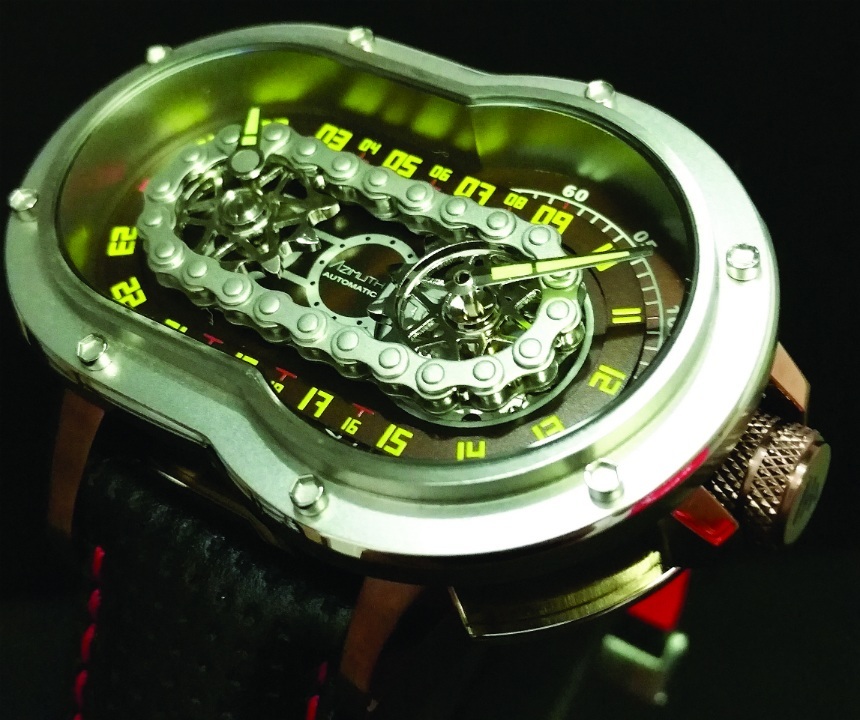 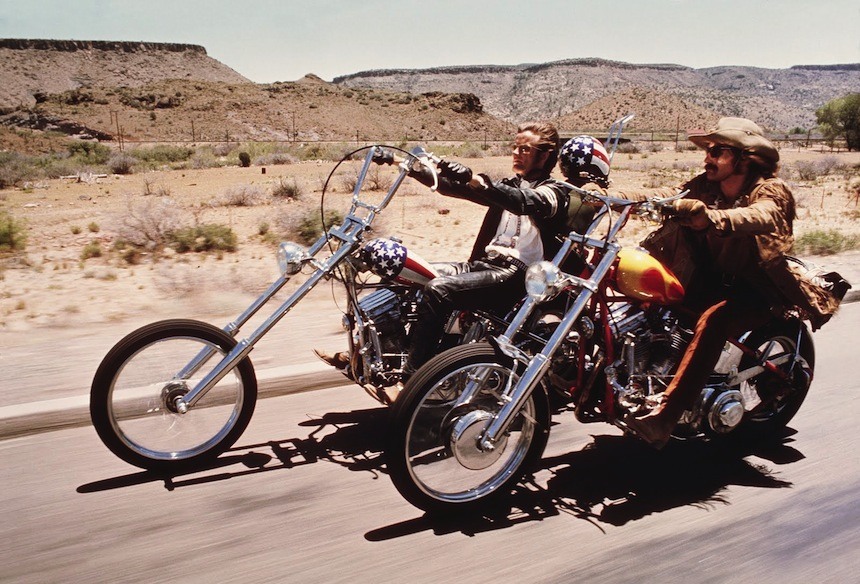 Inspired by the vast, winding stretches of endless roads that make up the U.S. highway system, the Azimuth SP-1 Crazy Rider watch is named as a playful take on one of my favorite movies, Easy Rider. For anyone who hasn’t seen it, the movie (starring the inimitable duo of Peter Fonda and Dennis Hopper), is all about the freedom afforded to the protagonists by a sense of independence and the vast potential of what lies ahead when you have no real destination. Automobiles and watches have a long history together, but Azimuth went in a slightly different direction and chose to derive inspiration from motorcycles – the preferred method of transportation by certified badasses Fonda, Hopper, and for a little while, Jack Nicholson. 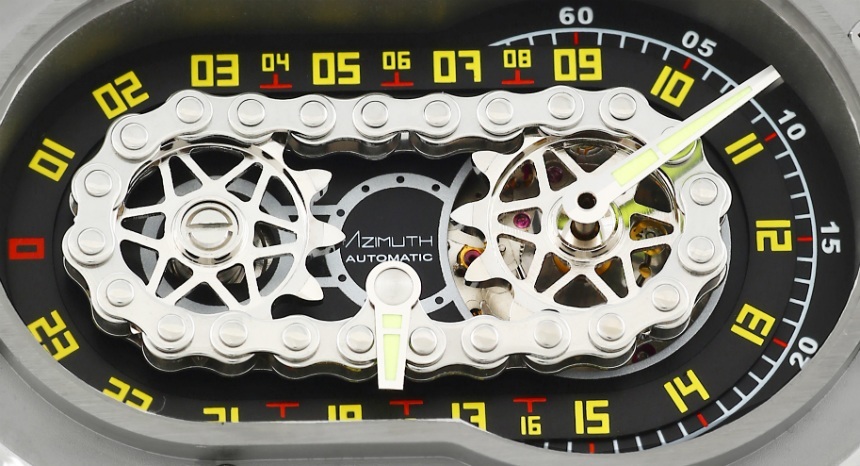 Visually, this Azimuth SP-1 Crazy Rider watch is designed to look like the engine of a motorcycle, with a quirky, asymmetrical infinity loop-shaped case. Past the bezel and its exposed screws, you see a chain at the center of the dial that has two wheels at either end, designed to look like a sprocket brake drive system on a motorcycle. This isn’t simply an aesthetic choice, as the “chain transmission design” controls the hour and minute displays.

Now this is some really smart stuff right here; this is how the time indication works: around the inner circumference of the dial, you’ll see 24-hour markers in a rather cool and retro yellow and red. As time goes on, the hour hand is carried by the bike-chain-like apparatus along the 24-hour track. To the right-hand side of the case, notice the gauge dial indicating minutes: as the shorter hour hand moves around the chain to show the hour, the longer minutes hand moves up the dial. Now, while it appears that the chain is carrying the minute hand, the direct ratio means that the minute hand couldn’t make a full rotation fast enough – so what presumably happens instead is that the minute hand is actually fixed to a pinion that goes down into the movement, allowing it to move faster than the chain it is visually linked to would allow. 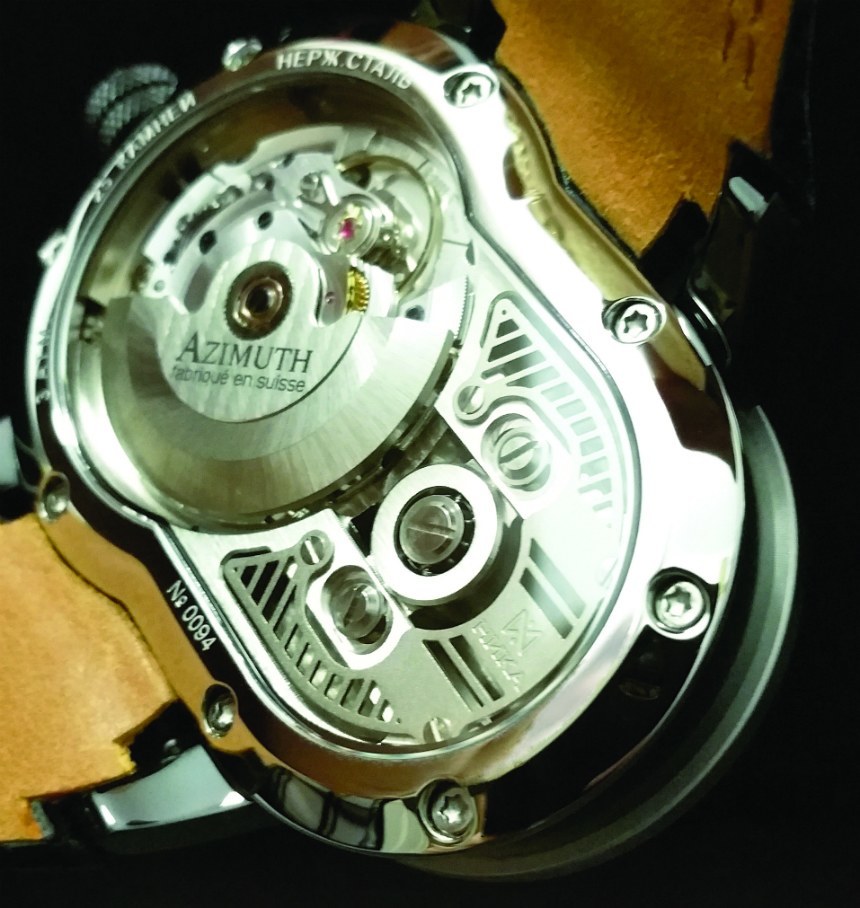 Told you it was some clever stuff! Moving on but sticking with the concept of out-of-the-box thinking, the caseback shows off the ETA movement modified by Azimuth for the Azimuth SP-1 Crazy Rider, and it is designed to look like an engine block. It looks nice and fits in well with the rest of the aesthetic theme of this watch, providing a nice cohesive element to the whole thing. 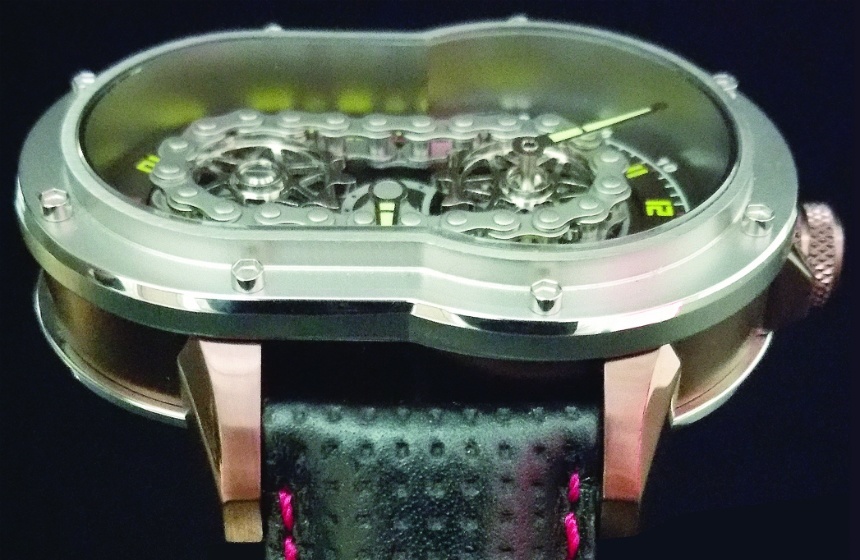 At 55mm wide, it’s not a small piece – well, in fact, it’s huge! But that’s to be expected given the other models put out by Azimuth – just think of this tank-like beast, the Azimuth SP-1 Landship watch (reviewed here). The Azimuth SP-1 Crazy Rider rides on a sporty leather strap with contrast stitching that matches well with the overall look of the piece. You can get the mid-case element of the piece in either black PVD or brown PVD. The watch’s water resistance is 30 meters, so it certainly is more for highway cruising than swimming or diving.

If you are no fan of such avant-garde designs, then the Azimuth SP-1 Crazy Rider probably won’t make you change your mind – but if you like more unusual designs matched with genuinely creative engineering, then it may just be for you. It’s definitely a conversation piece, and if you’re a fan of Easy Rider, it’ll draw you in for sure. Again, it’s a modified ETA movement and movement finishing is in line with that – but then again, so is the price, which is up there, but still considerably less than what you would expect such novel pieces to go for. Azimuth first made an initial run of 100 units, but this isn’t a limited edition model, and so the price for the Azimuth SP-1 Crazy Rider is CHF 5,250. azimuth.com