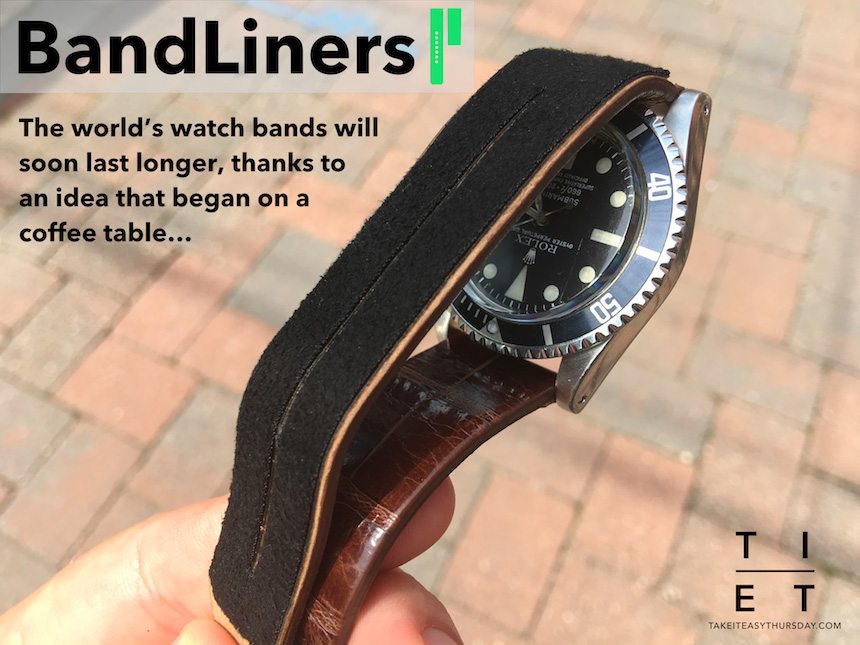 I wanted to invest in an alligator watch band and actually wear it, without having to replace it in a few months because – like most humans – I sweat. This was the motivation that sparked the idea for BandLiners, a product I recently debuted to the world on Kickstarter.

My name is Ryan Zaczynski, and a little over a year ago, I had a cushy management job in a NJ office park. As an outlet for my side projects, I’d founded a company called TAKEITEASYTHURSDAY – a name based on aspiring to do more than just taking Friday off. After dabbling with a microfiber accessory for men’s neckties (another story for another day), I was swiftly taken by the potential for a product like BandLiners. I committed to finding a way to enable watch enthusiasts to wear their watch bands without compromise.

Little did I know that in a year’s time I’d be a full-time entrepreneur writing a piece for aBlogtoWatch, and I’d be on the verge of making BandLiners a product that would not only help preserve watch bands, but also help people with skin sensitivity once again gain the ability to wear a watch band of their choice. 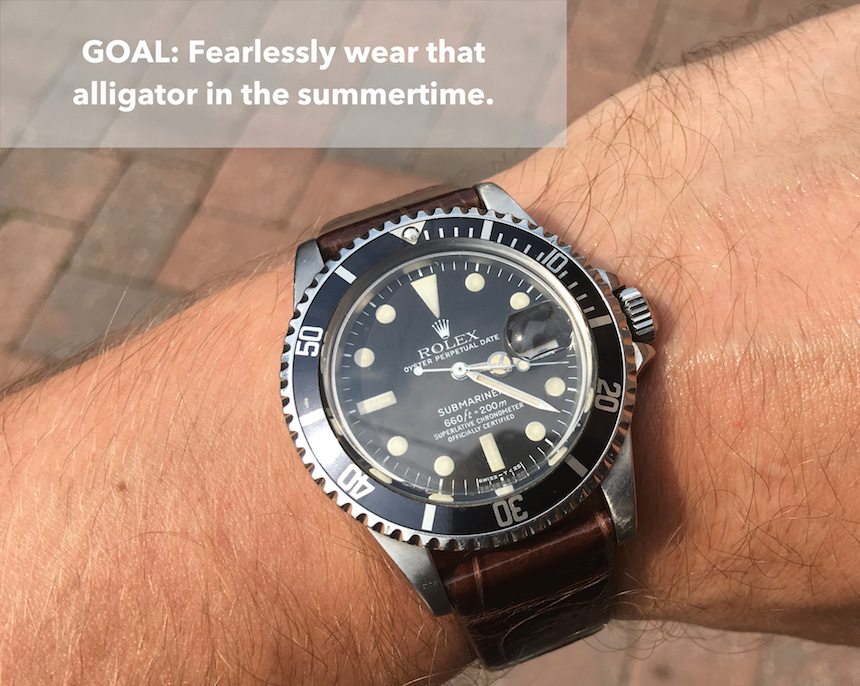 I wanted to do away with the practice of stashing away watch bands for the summer months. I wanted watch bands to have the fighting chance to develop the beautiful patina they’re capable of developing with years of use by preventing their premature death due to the inevitable watch band stink.

I’m a huge fan of “daily driving” everything I own. I’ve worn out countless soles of high end shoes, only to have the cobbler reincarnate them into better, aged versions. Leather wallets, bags: the more money spent, the more I’m going to push them to the limits. Vintage watches? I love how each scuff and nick adds to the story.

But the watch band always posed a unique challenge as a daily driver, mainly due to the physiology of human beings: we sweat. We harbor bacteria on our skin that’s imperceptible to us day-to-day, but over time it makes itself a lovely home in the nooks and crannies of our leather goods. In the case of shoes, the problem was effectively solved by the introduction of socks. However, watch bands, given a similar situation in terms of exposure, have yet to have their own version of socks come along to offer them protection.

I realized that BandLiners could become the “socks” for watch bands. I even considered that as a name for the product, but ultimately I stuck with simplicity: BandLiners was a name that explained exactly the purpose the product was intended to serve. 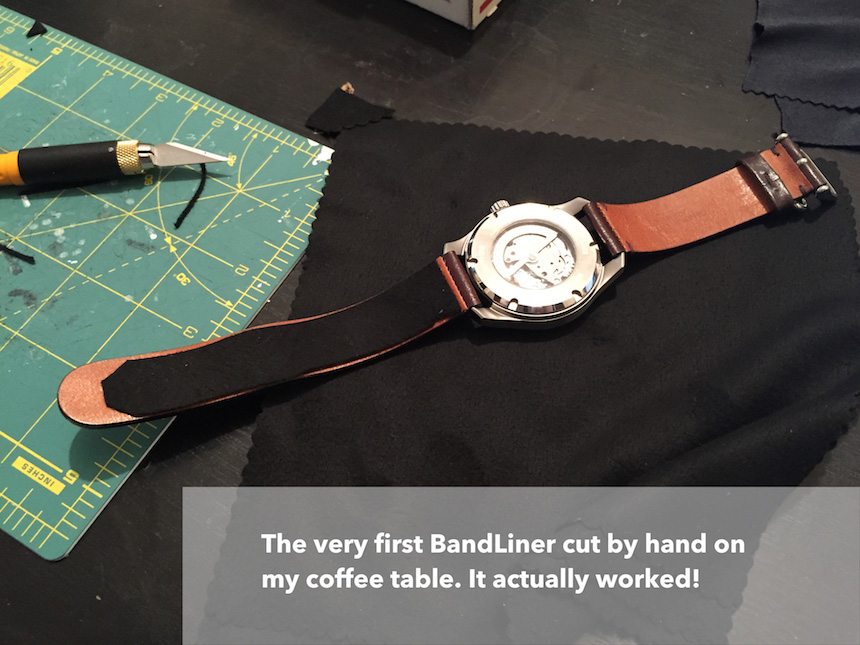 After tinkering with a microfiber product intended for men’s ties, the adhesive qualities of Post-It notes inspired me to repurpose the fabric for something even more practical: a protective liner to block sweat from attacking watch bands and causing their premature demise. If the right sort of temporary adhesive could be found, then it might just work.

Having a background in both Biomedical and Electrical engineering helped as a starting point. I understood the types of attributes such a product would need to encompass:

I began creating BandLiners on my apartment’s coffee table after hours. Beginning with some microfiber and double-sided fabric tape, I tested the idea and, to my amazement, it worked exactly as expected.

I researched the treatments necessary to stave off bacteria growth. I reached out to multinational adhesive manufacturers for advice on appropriate adhesive compounds that would stay attached without damaging the band. I learned an immense amount about the structural integrity of double-sided adhesives, and I faced seemingly a never-ending set of challenges that, one by one, I was able to overcome. 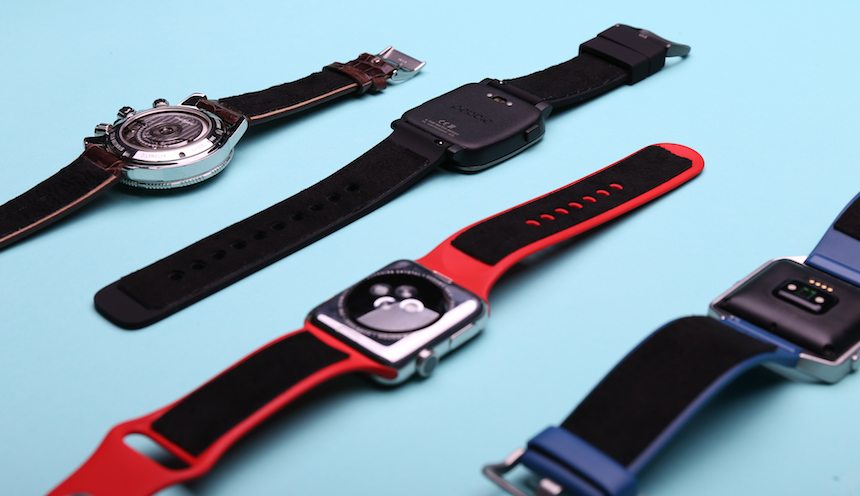 When It Became More Than Just Protection For Watch Bands

About three months into the project, I began using laser cutting to achieve high quality prototypes. While discussing the attributes of the the project with my manufacturer, he told me a story that completely changed the way I looked at BandLiner’s potential.

He mentioned that his wife had recently begun wearing a Fitbit, but with the onset of hot weather, she’d developed an irritating rash from the rubber band. Out of curiosity, they placed a strip of my BandLiner material on the Fitbit band, and after a few days his wife’s rash subsided and did not return. It became clear that BandLiners were not only a product to protect watch bands from people, but also a way to protect people with sensitive skin from watch bands.

After hearing this story, I expanded the scope of BandLiners to cover the rubber bands associated with all of the most popular smart watches (Apple, Fitbit, Pebble, etc); plans for supporting metal bands (for those with metal allergies) are also in the works.

From potential customers, I learned that rubber bands were also subject to the dreaded band stink, and many athletes were excited about the prospect of protecting their bands from sweat.

When the potential customer base of BandLiners kept expanding, I knew that it was time to seriously pull the trigger. 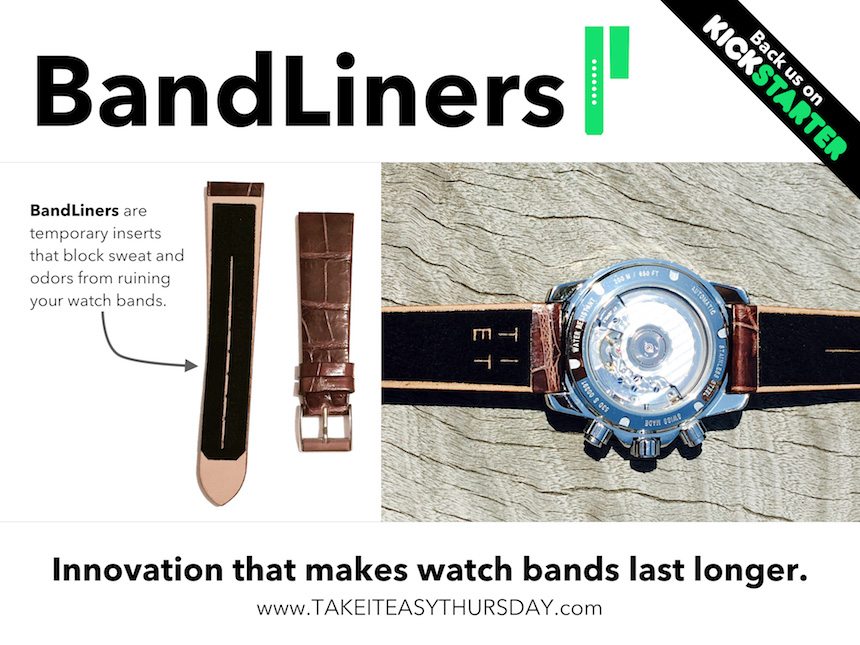 The BandLiner Kickstarter Has Launched, With More To Come Soon!

Given BandLiners are a completely novel product, I had no idea what to expect when bringing them to market. I’ve launched a Kickstarter to test the idea, and so far backers have been slowly but steadily supporting the product. This sponsored piece is the first public debut of BandLiners, and I’m looking forward to how the idea is received by the aBlogtoWatch community!

Love BandLiners? Hate them? Have your own story to share? I’d love to hear from you directly, and I can be reached personally at [email protected].