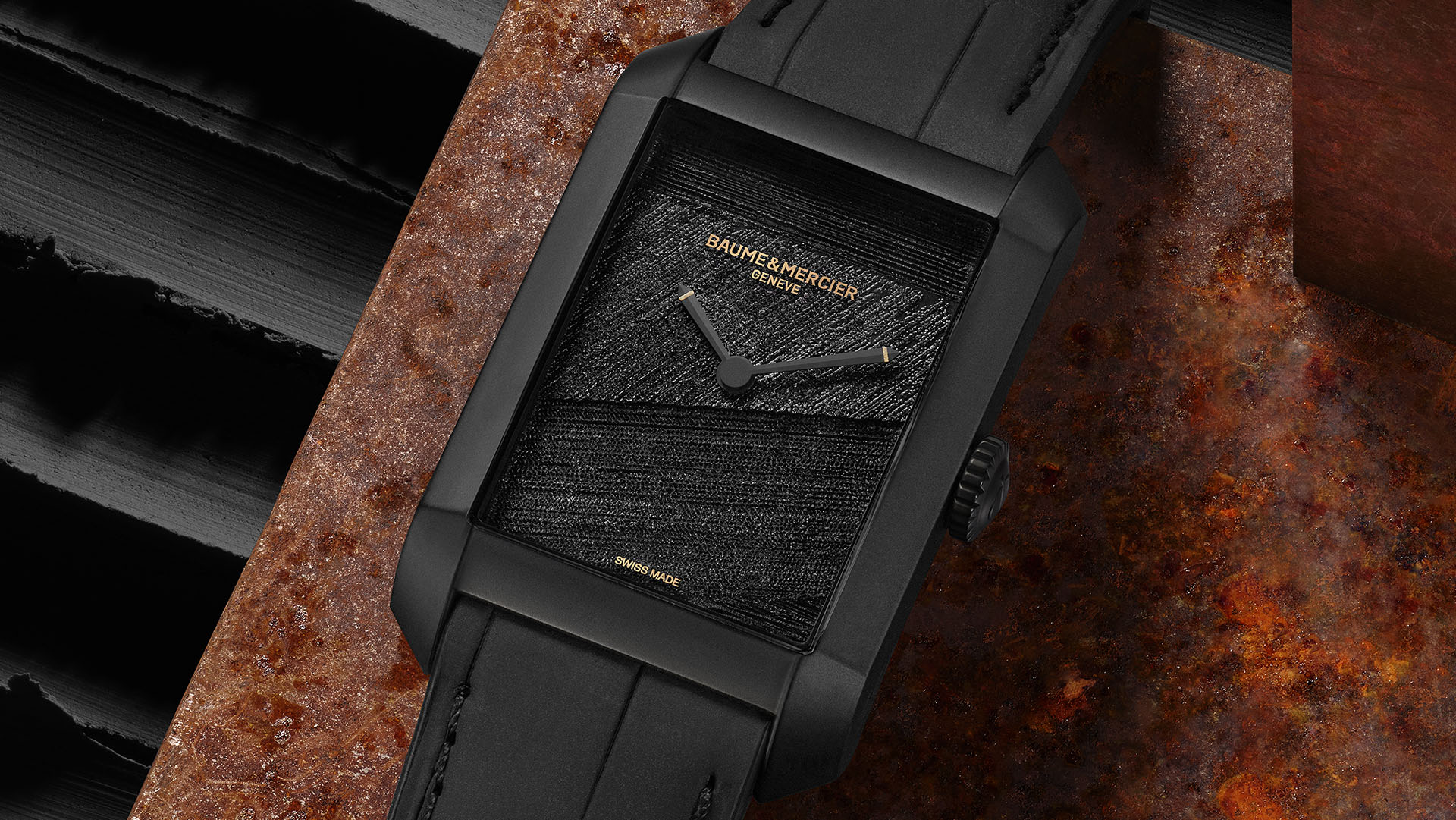 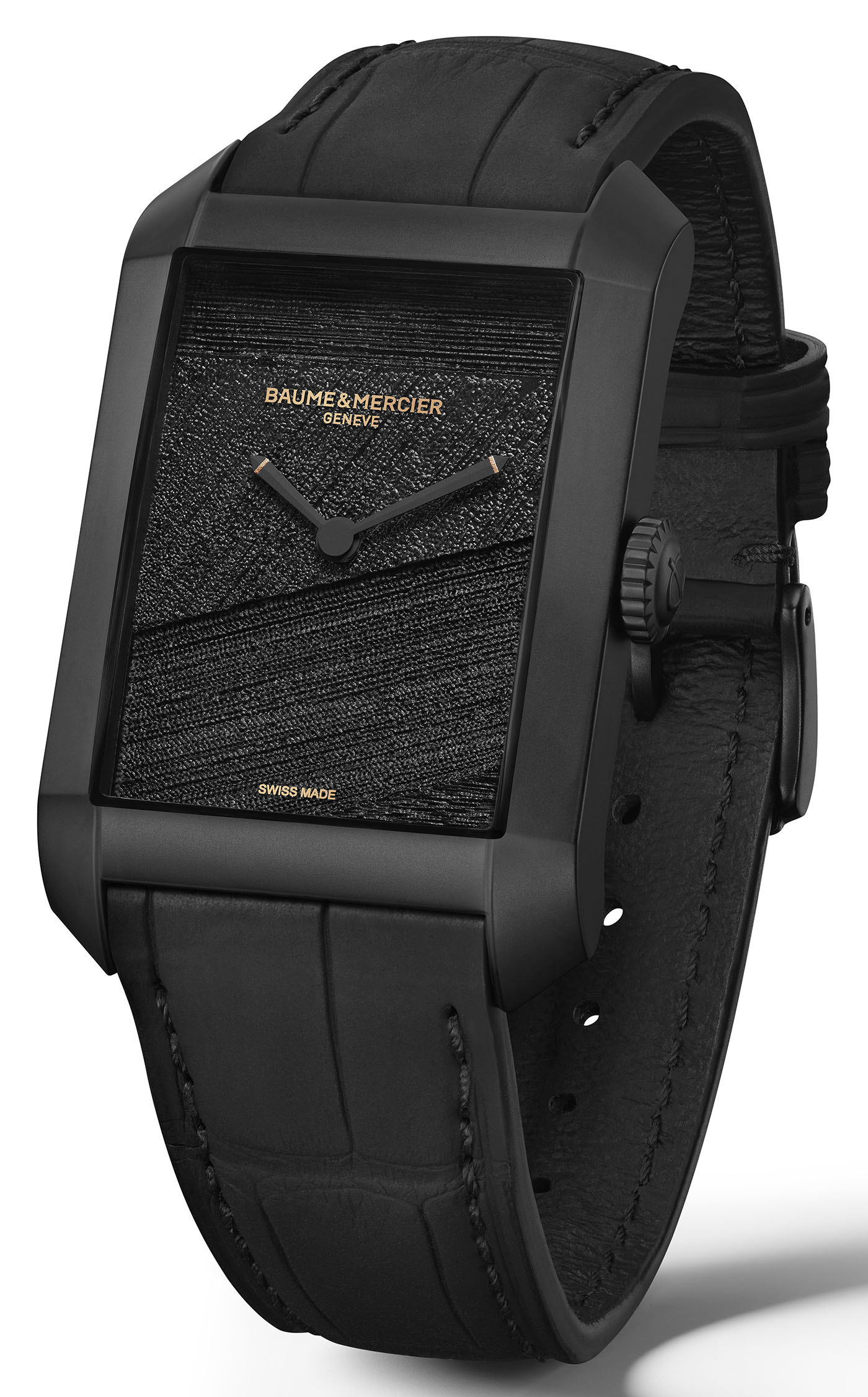 The process of miniaturizing an existing painting to fit the confines of a watch is an art form unto itself, with skilled miniature painters recreating classical works from artists ranging from Vermeer to Hokusai in vivid color and exacting detail. For the most part, this miniaturized painting trend has avoided the more minimalist expressions of modern art, but for its latest release Baume & Mercier aims to capture the all-black style of French abstract artist Pierre Soulages. Soulages’ long-running painting series “Outrenoir,” which began in 1989, was highly influential in creating the look of contemporary monochrome abstractionism. Baume & Mercier’s new Hampton model iterates on the series’ distinctive brushstrokes without directly copying any one painting. The new limited edition Baume & Mercier Hampton Hommage à Pierre Soulages offers a darker, moodier take on the miniaturized painting watch trend, with enough visual punch and charisma to capture non-Soulages fans as well. 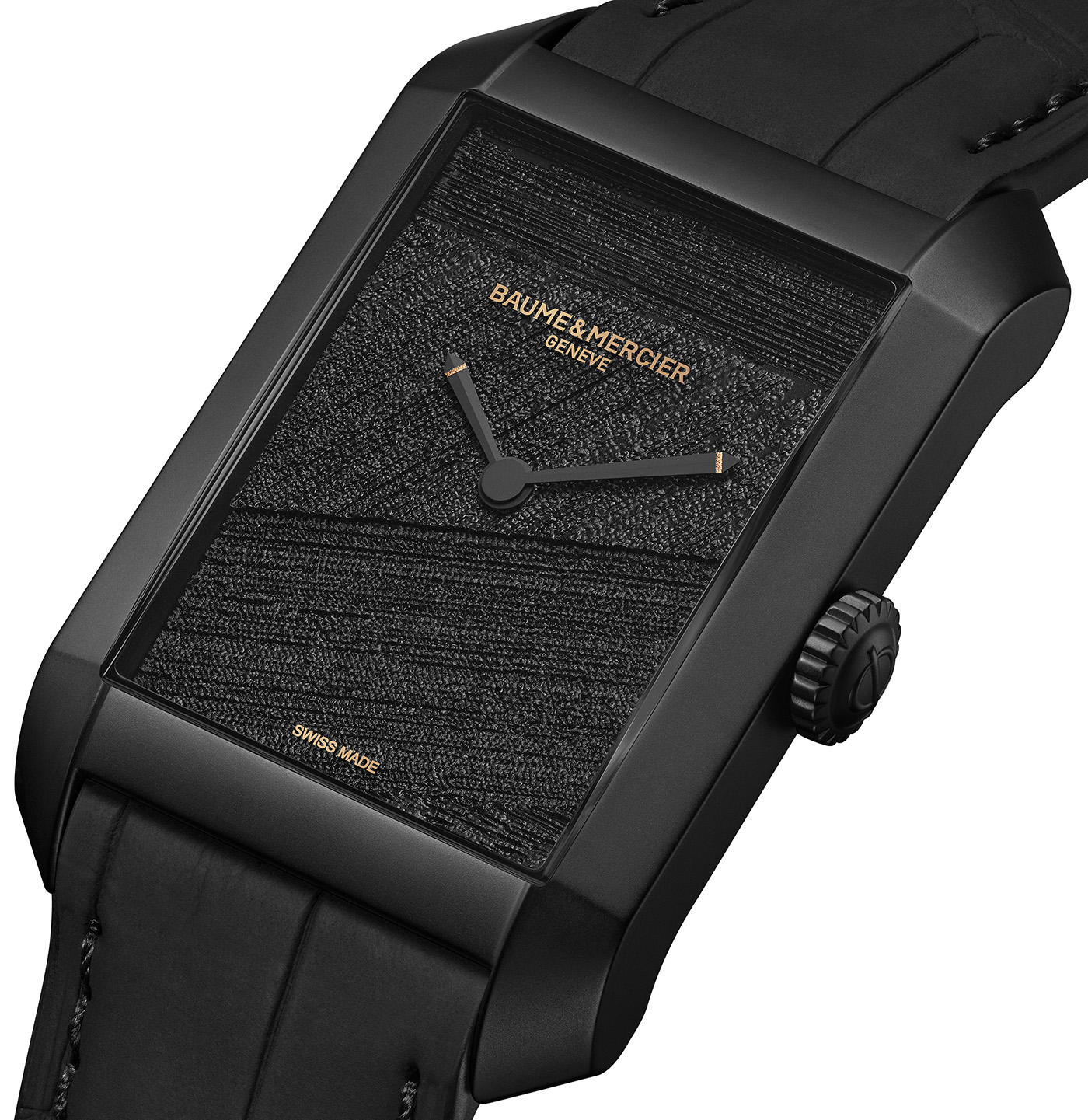 The Baume & Mercier Hampton Hommage à Pierre Soulages’ stainless steel case follows the standard Hampton’s rectangular case profile, measuring in at 31mm-wide and 48.1mm-long. This is a bolder, squared-off riff on the classic tank case design, with broad-shouldered lugs and sharply defined vertical case sides. While this style usually falls firmly into traditional dress watch territory, Baume & Mercier’s use of a sandblasted matte black DLC finish gives this familiar profile a more youthful and aggressive edge in images. Although the dark matte finish and simple geometry both suit the monochrome inspiration and keep visual focus squarely on the dial, the brand equips this case with a sapphire display caseback for a greater sense of spectacle. Although this tank-style design is far from traditional sports watch territory, the Hampton Hommage à Pierre Soulages’ 50 meter water resistance rating remains underwhelming. 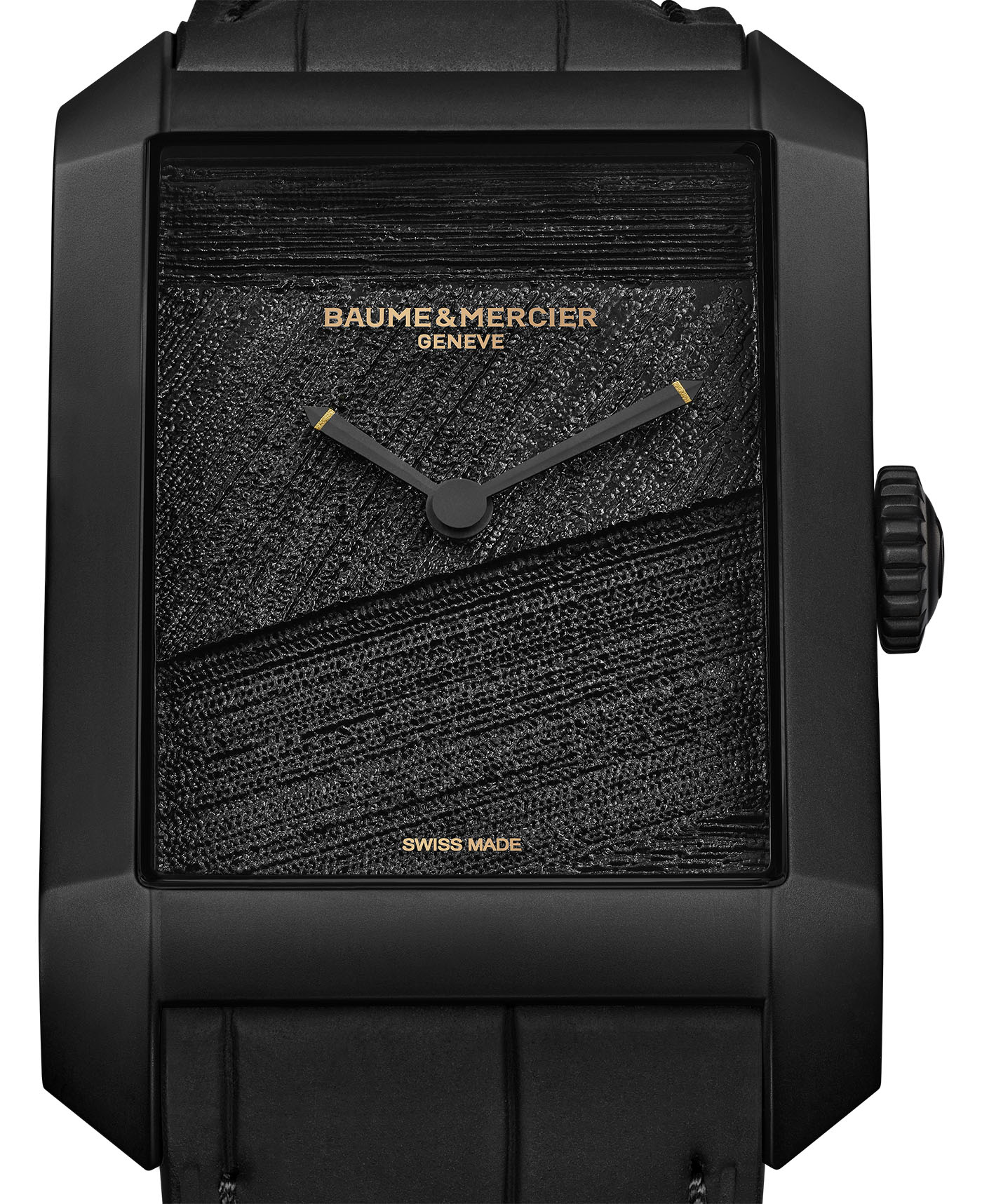 To preserve the spirit of Soulages’ moody and minimal “Outrenoir” series in a smaller scale, the dial of the Baume & Mercier Hampton Hommage à Pierre Soulages uses a deceptively complex finishing process. Other than the all-black color palette, one of the defining traits of the “Outrenoir” series is its use of broad, exaggerated brushstrokes. Baume & Mercier translates this textured surface to the scale of a watch dial not with a traditional method like engraving or stamping, but a high-tech multi-stage process that begins with a 3D printed prototype in wax. From there, the brass dial blank is machined via laser to emulate the prototype’s brushstroke ridges, then ground with Candia stone to create an uneven matte effect. The black color itself is applied via electrolysis, and then sealed with a 10-micron layer of semimatte clear lacquer. The effect is striking and nuanced in images, capturing the look of thickly brushed black paint effectively and adding a sense of palpable visual depth to this minimal layout. Given the complexity and effort behind this dial surface, Baume & Mercier wisely opts to preserve as much of it as possible, interrupting the design only for high-impact gold dial text at 12 o’clock and 6 o’clock. To match this evocative dial surface, the brand renders the faceted glaive handset in sandblasted brass, which is coated with black PVD and painted with elegantly slim gold accent stripes. 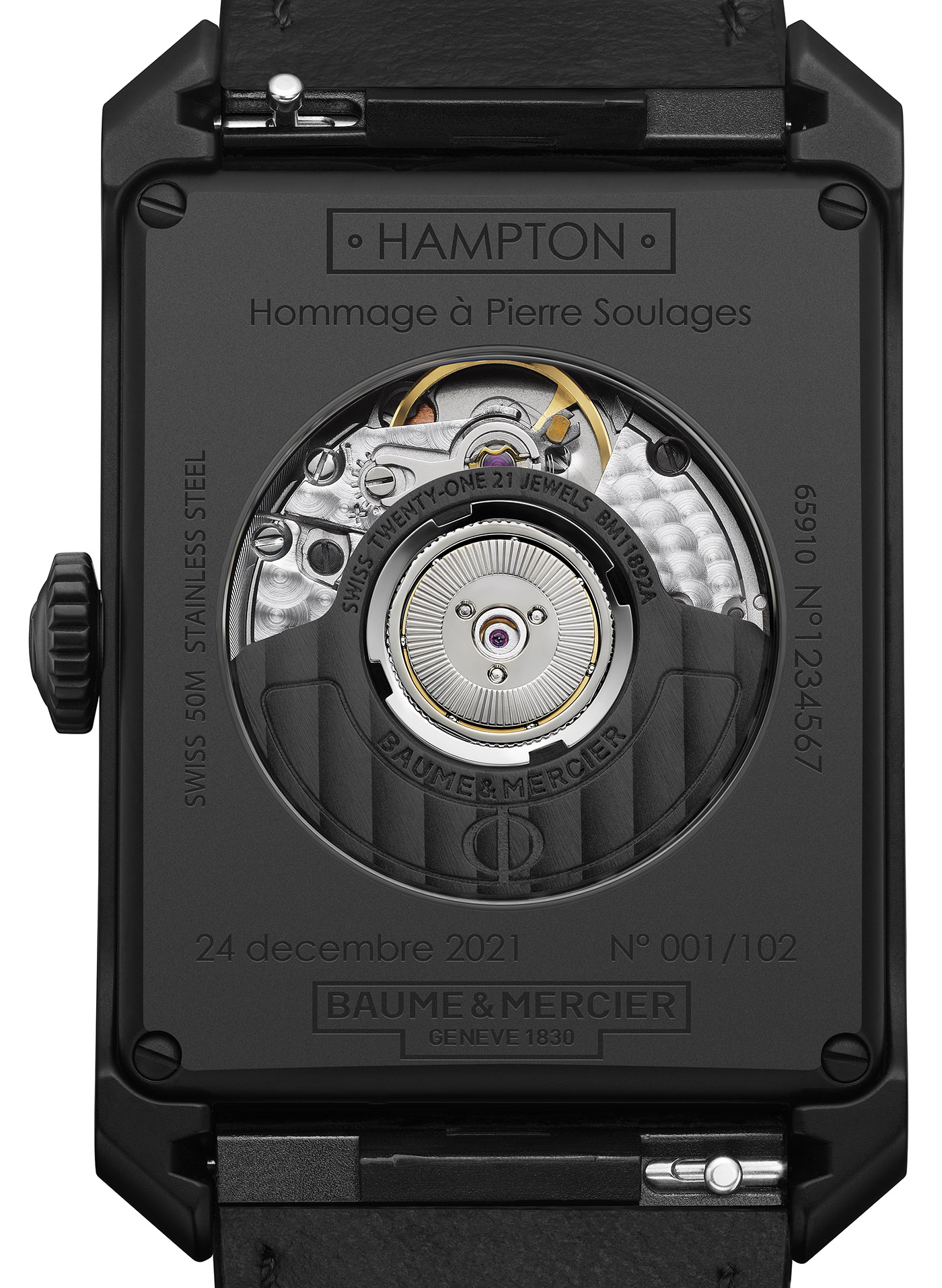 Baume & Mercier powers the Hampton Hommage à Pierre Soulages with the ubiquitous ETA 2892 automatic movement. Although somewhat pedestrian compared to the intricate custom work of the dial, the 2892 is a reliable mainstay of the watch industry with a solid 42 hour power reserve and a 28,800 bph beat rate. Baume & Mercier preserves some of the moody black colorway in the 2892’s finishing, with a black PVD coating atop the Côtes de Genève on the signed rotor. The movement screws are finished in a matching black as well, while the bridges and balance cock receive a handsome perlage treatment. Baume & Mercier continues the colorway into the watch’s matte black alligator leather strap for a unified and stylish look overall. 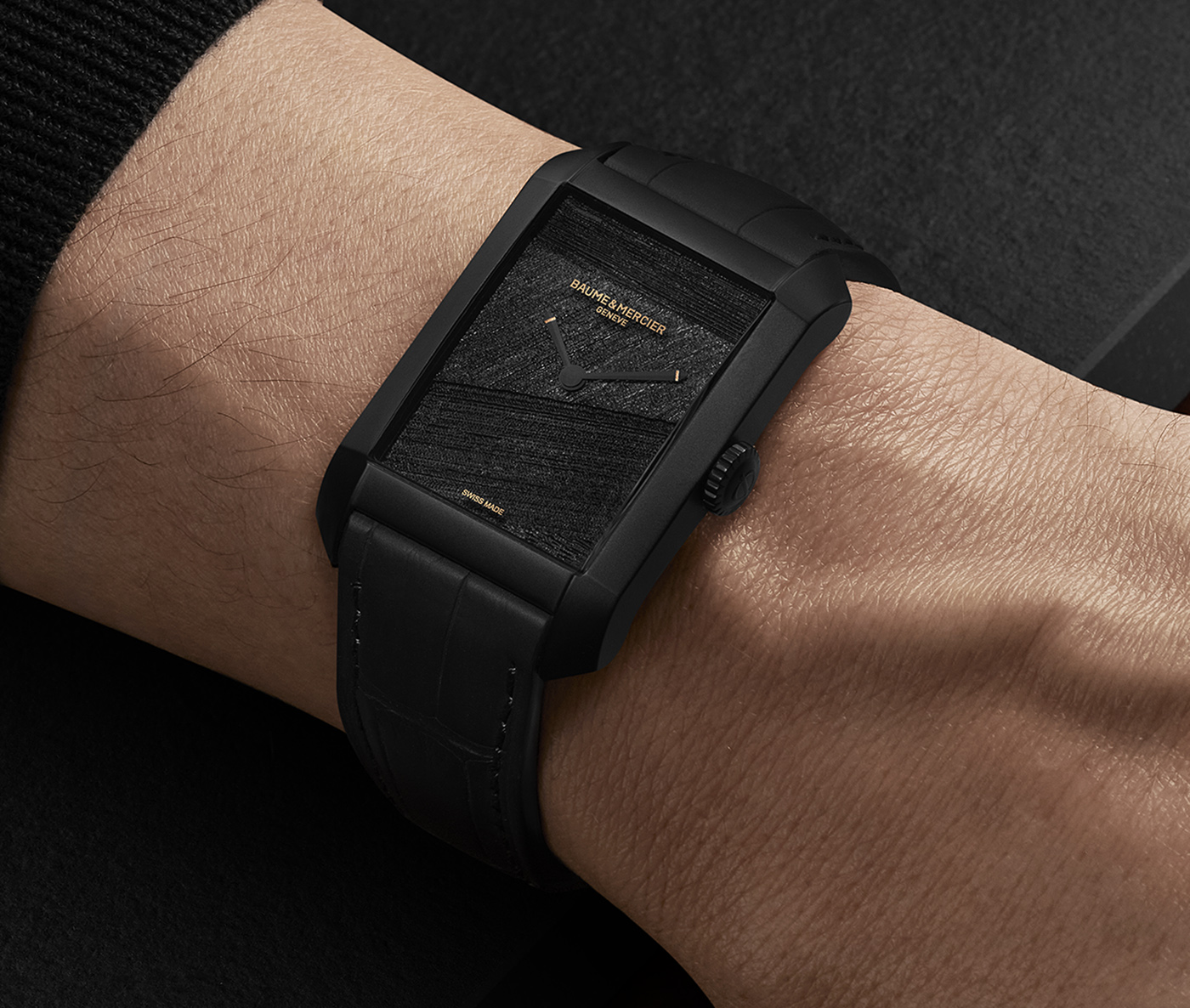