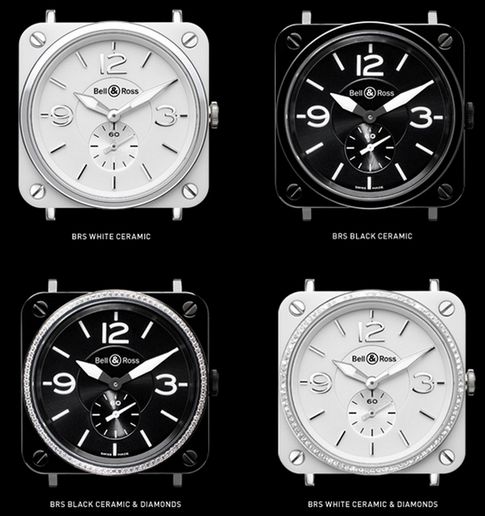 French designed Bell & Ross watches just don’t cease to impress me. This company is on a roll! I cannot wait to see where there will be in a few years. Even before they become popular with the release of the BR-01 line of watches, I was a fan. Talk about being ahead of the curve right? Well Bell & Ross realizes the wide appeal of the BR-01 line, and have creates many derivatives. There was the smaller BR-03 at 42mm (as opposed to 46mm with the BR-01), then the BR-02 Diving instrument came out and took the line in an entire new direction. The appeal of the BR-01 was the square case with round dial. Now, Bell & Ross experiments by taking a decidedly more formal approach than is typical with the commonly rugged and instrumental looks of the BR-01.

The New BRS models are not the first ceramic watches to be released by Bell & Ross. They recently came out with black and white ceramic BR-03 watches (even with diamonds), but the BRS watches are smaller yet (though still large enough for men) and have a totally new face for the series.

Welcome to the BRS watches, that look absolutely gorgeous. I credit Edoaurd G with the photos of the BRS watches, and you can see the full set of his BRS photos here. The marketing images from Bell & Ross just don’t do these watches justice. Ceramic cases have a quality the requires live photographs to fully appreciate. I’d say they are watches that actually look better in person and in images. Just look at home amazing they watches look in this images. While 39mm is smaller by today’s standards, the square shape of the case makes them look a big bigger. 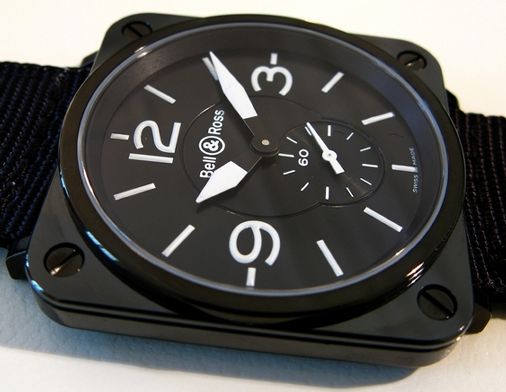 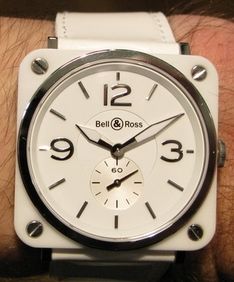 The BRS series is very thin as well, at least by BR-01 standards. Inside is a manually wound movement, which helps keep the case signature slim. I don’t know how practical a manually wound movement is in a BRS, but at least they didn’t resort to using a quartz. Honestly, I don’t have a problem with quartz watches, but knowing Bell & Ross, I don’t feel comfortable paying in the several thousands for a quartz watch, which the BRS will of course cost.

Overall the new BRS collection is a nice addition to the Bell & Ross family. The diamond bezel collection is likely added at diamonds look really nice against the glossy look of ceramic, be it white or black. These are truly unisex watches looking good on both men and women. Good job Bell & Ross, I look forward to seeing one of these BRS stunners in the wild starting late fall 2008. Prices range from about $3,000 – $15,000 depending the materials used (ceramic, steel, gold), and the level of diamond adorning you prefer.