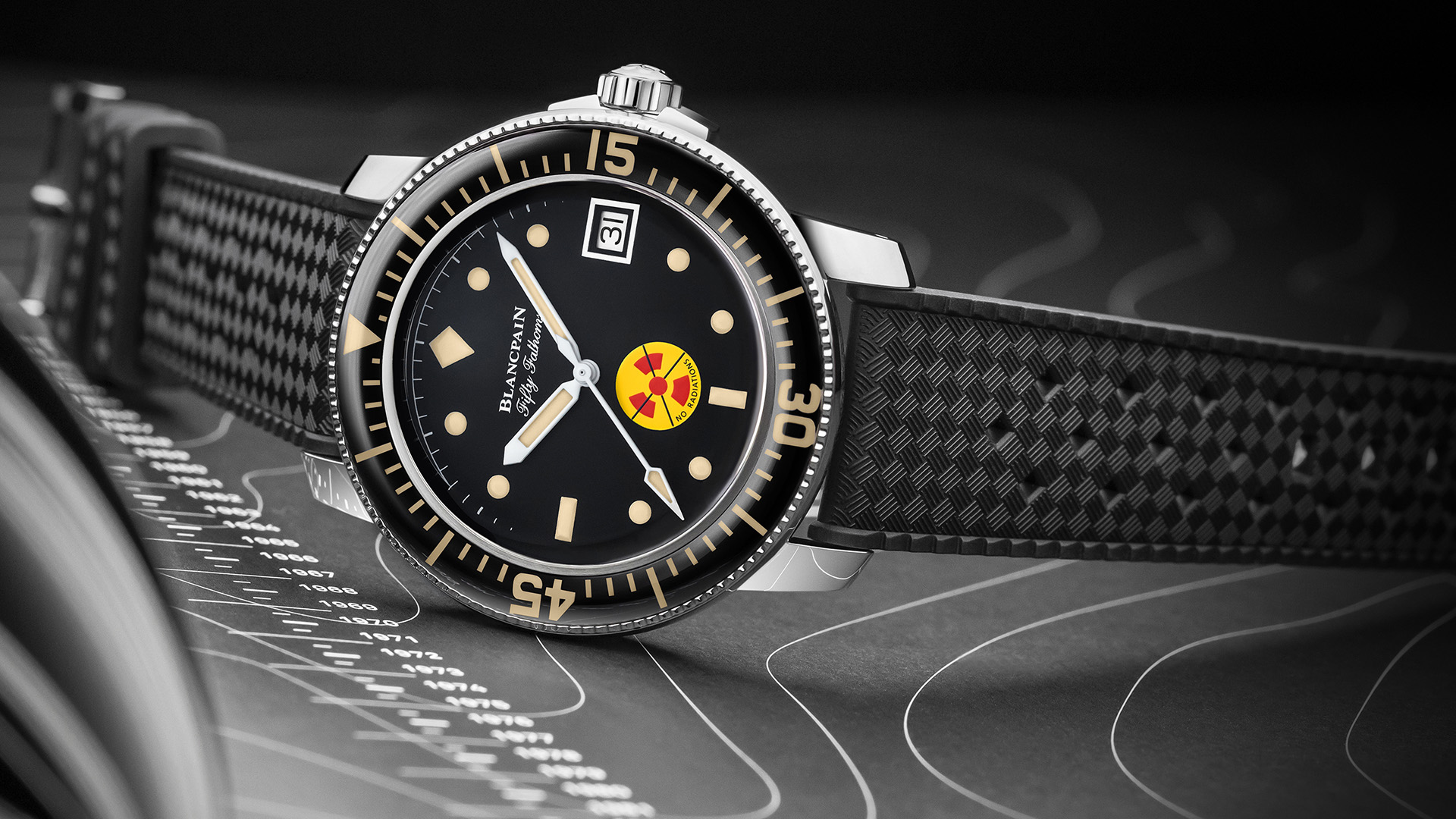 Perhaps no other combination of factors excites vintage watch enthusiasts quite like early dive watches with military provenance. The blend of classic design, field-proven durability, and the romantic warmth of patina is a difficult one to beat, and few brands capture this magic formula better than Blancpain. The brand’s Fifty Fathoms line is one of the longest-running and most celebrated diver lines in all of watchmaking, and Blancpain certainly has no lack of historic points to reference with its collection. For its first major release of 2021, Blancpain singles out one of the most lauded military references in the Fifty Fathoms’ lineage. First produced in the mid-‘60s for the elite Kampfschwimmer combat divers of the West German navy, the Fifty Fathoms No Rad offered these battle-hardened, frogmen-tough functionality and underwater legibility without the use of radium lume, which was still the standard at the time but had been discovered to cause potential health issues. The new limited-edition Blancpain Tribute to Fifty Fathoms No Rad looks to capture that same midcentury military spirit, adding a bold graphic treatment and mellow patina to the traditional Fifty Fathoms design for a charismatic and eye-catching new look. 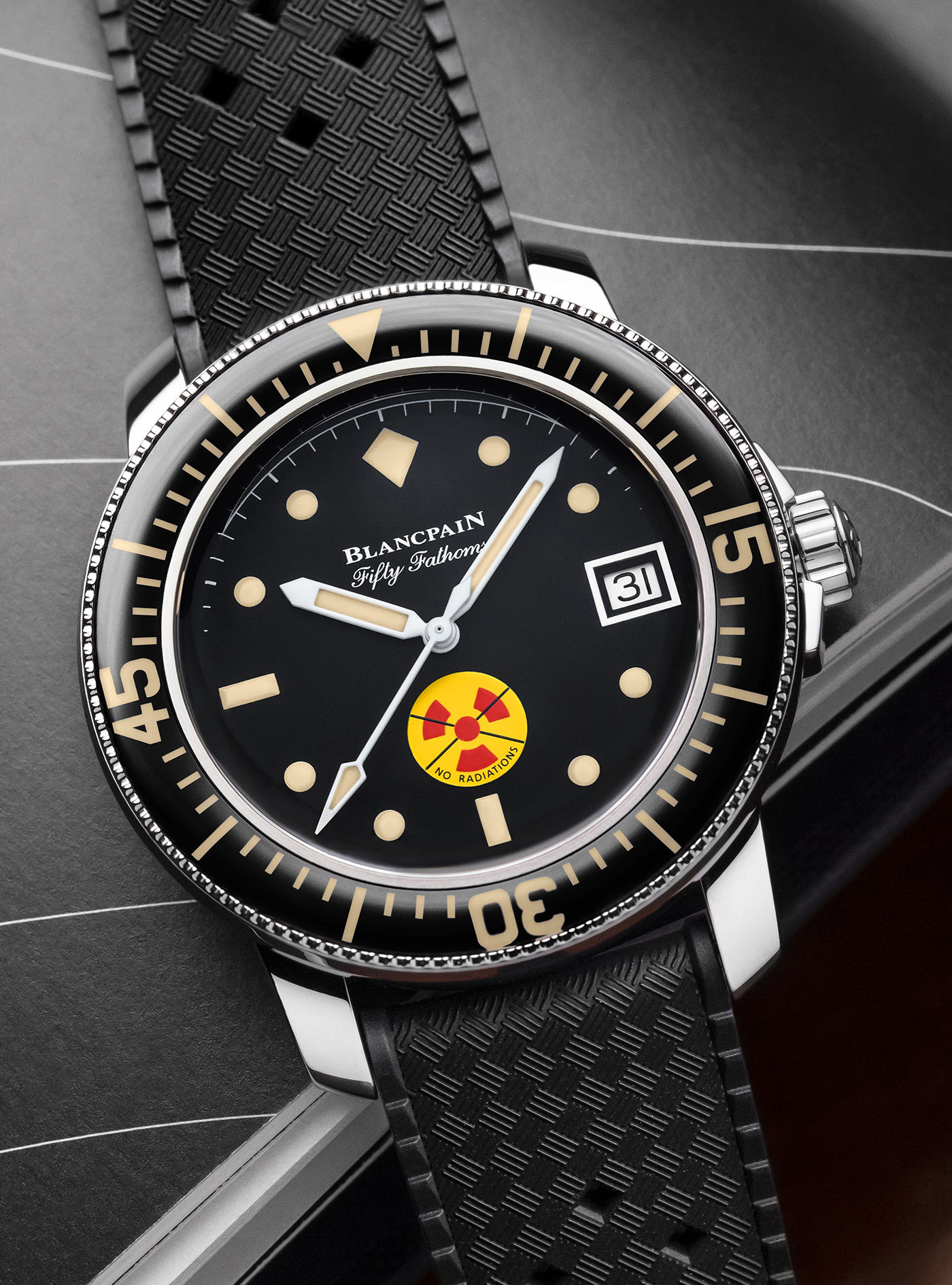 Measuring in at 40.3mm, the stainless steel case of the Blancpain Tribute to Fifty Fathoms No Rad keeps all the hallmarks of the current Fifty Fathoms line. The low, squared-off crown guards and short, wide-set lugs are finished here in a full polish, emphasizing the dressier character of the Fifty Fathoms compared to some of its rivals. The rounded curve of the sapphire bezel insert is a signature element of the modern Fifty Fathoms line, giving the harsh utilitarian concept of the dive bezel a touch of softness and refinement. Here, this insert sports a full scale in a warm khaki lume, giving the piece a more purposeful and vintage cast in initial images. 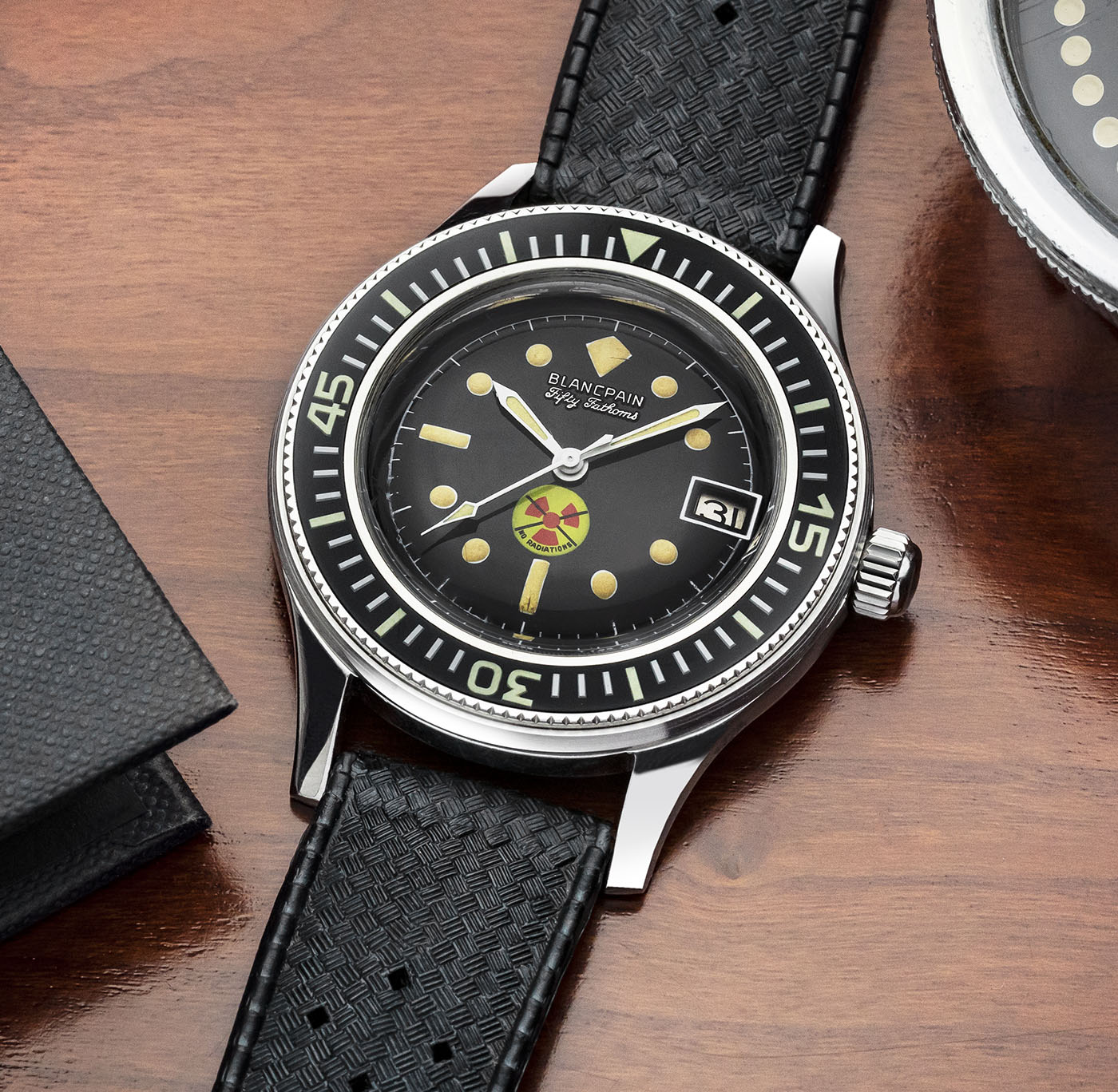 It’s worth mentioning, however, that none of these elements sports a particular resemblance to the case of the original Fifty Fathoms No Rad. The ‘60s model carried a markedly different profile, with no crown guards, narrow tapering lugs, and a flat bezel insert in Bakelite with a scale in light gray. For this new model, then, the aim is less about direct reproduction than it is about capturing the spirit of ‘60s dive watch patina, which it appears to do solidly. Around back, the Tribute to Fifty Fathoms No Rad features a sapphire display caseback along with a limited edition serial number. Blancpain rates the Tribute to Fifty Fathoms No Rad at a solid 300 meters of water resistance. 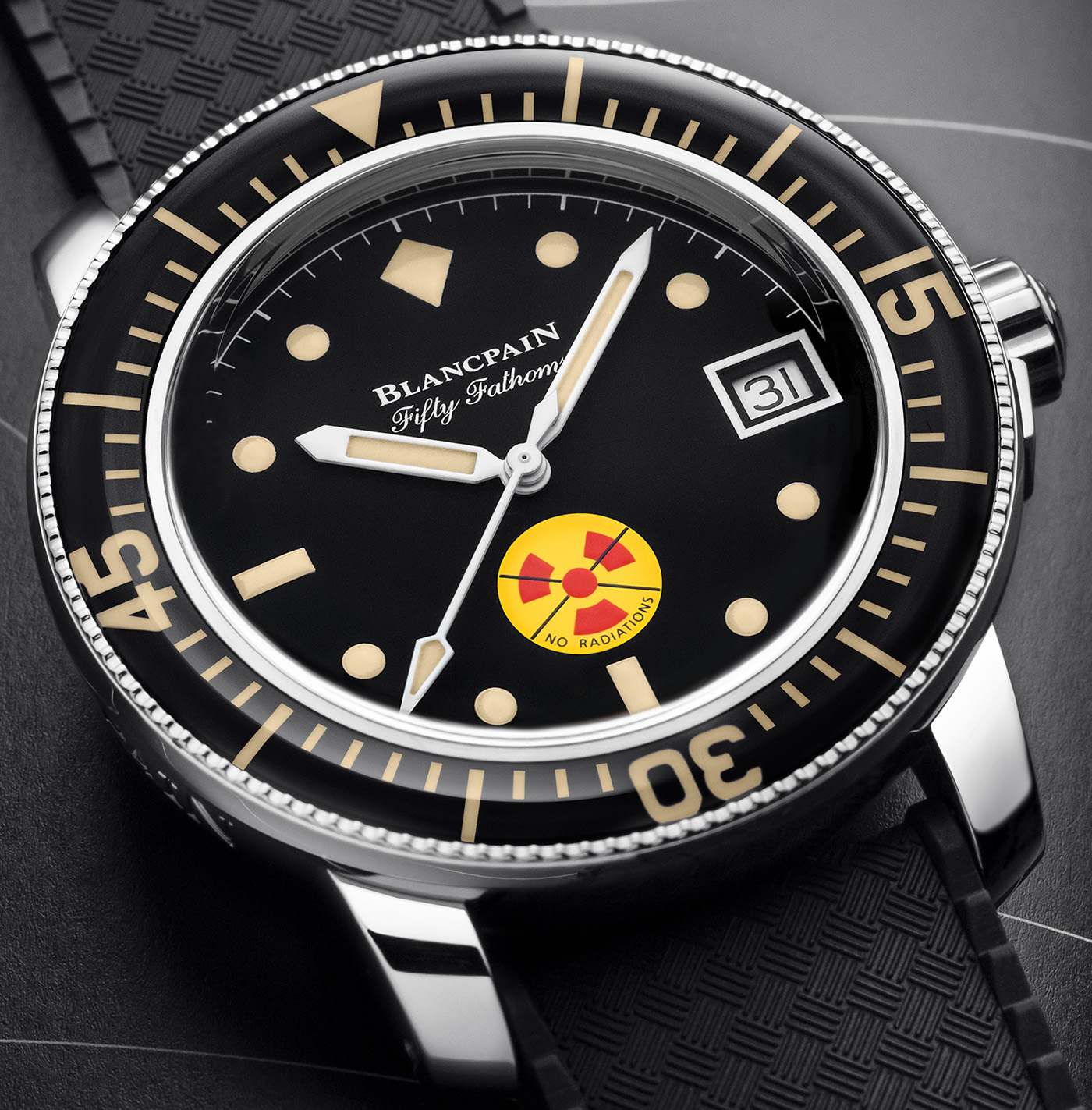 As opposed to the case, the dial of the Blancpain Tribute to Fifty Fathoms No Rad takes a far stricter approach to capturing the look of the ‘60s original. To this end, Blancpain’s variation on the classic printed dive watch indices with its diamond-shaped 12 o’clock marker is rendered in khaki Super-LumiNova, as is the lume fill on the narrow white sword handset. Naturally, the prominent red and yellow “No Radiations” symbol at 6 o’clock steals the show in this design, harkening back to the ‘60s original and boldly setting itself apart from the standard Fifty Fathoms at a glance. With such a dominant central element, Blancpain makes the wise and historically accurate decision to keep the rest of the dial design pared back, with only the branding at 12 o’clock to visually counterweight the mark. While the “No Radiations” symbol is an undeniable focal point for the design, Blancpain faithfully reproduces the subtler elements of the original dial here as well. The silver printed outer minutes track and broad printed white border surrounding the 3 o’clock date window are both faithfully carried over, as is the choice of a white date wheel. 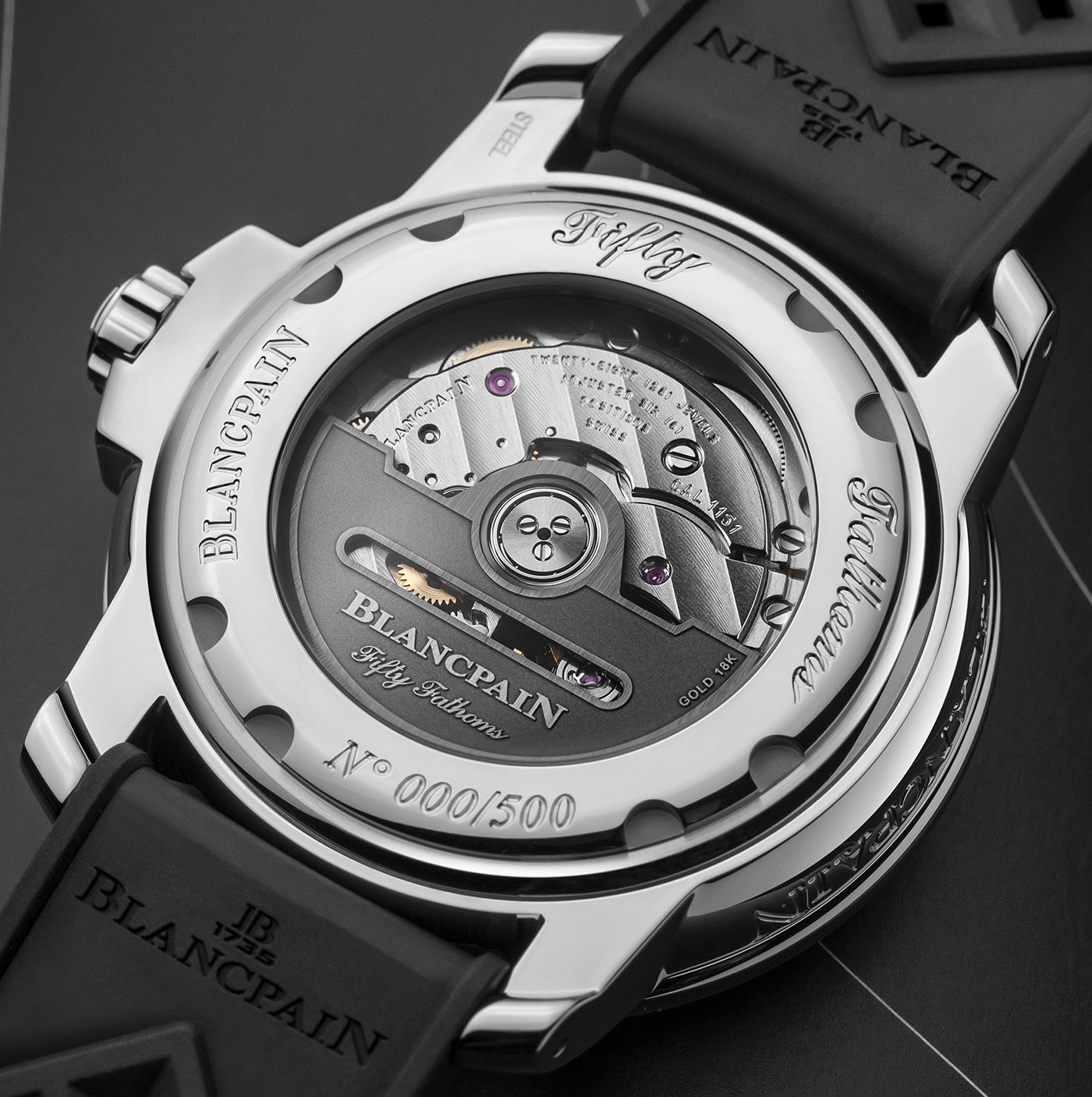 Blancpain powers the Tribute to Fifty Fathoms No Rad with its in-house Caliber 1151 automatic movement. Handsomely decorated with Côtes de Genève and polished chamfering along the bridges as well as a black-coated 18k gold rotor. Endowed with a silicon balance spring and twin mainspring barrels, the Caliber 1151 offers a massive 100-hour power reserve at a 21,600 bph beat rate. Although this slower than average frequency may be divisive among enthusiasts, the extended power reserve is a great benefit and the slower beating look adds authenticity to the vintage feel of the design. 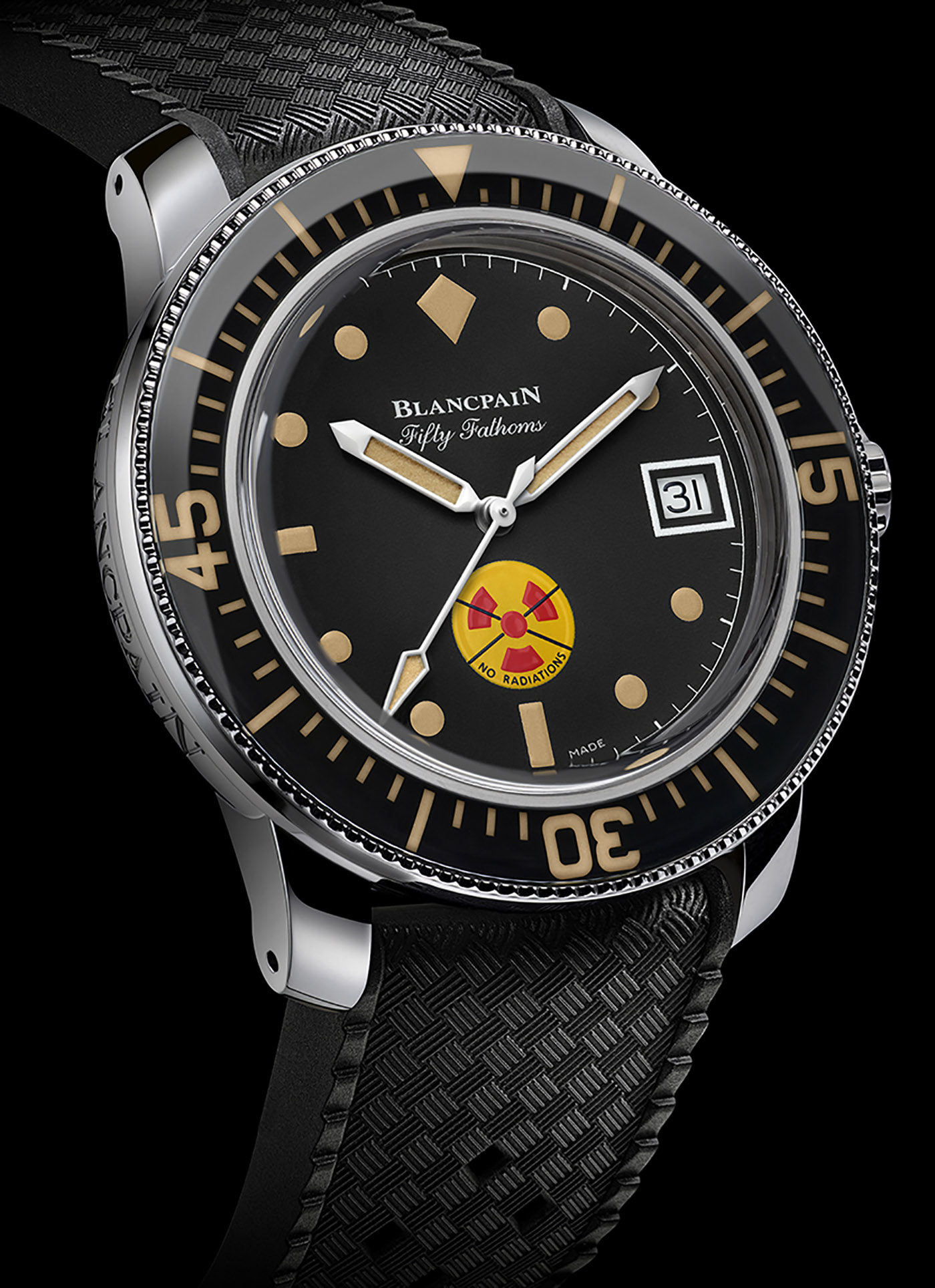 To complete the military-inspired vintage look, Blancpain pairs the Tribute to Fifty Fathoms No Rad with a classic black tropic strap. Made of supple rubber and perforated for easy breathability, the tropic strap offers a versatile and tough casual option for the design while remaining true to the original. 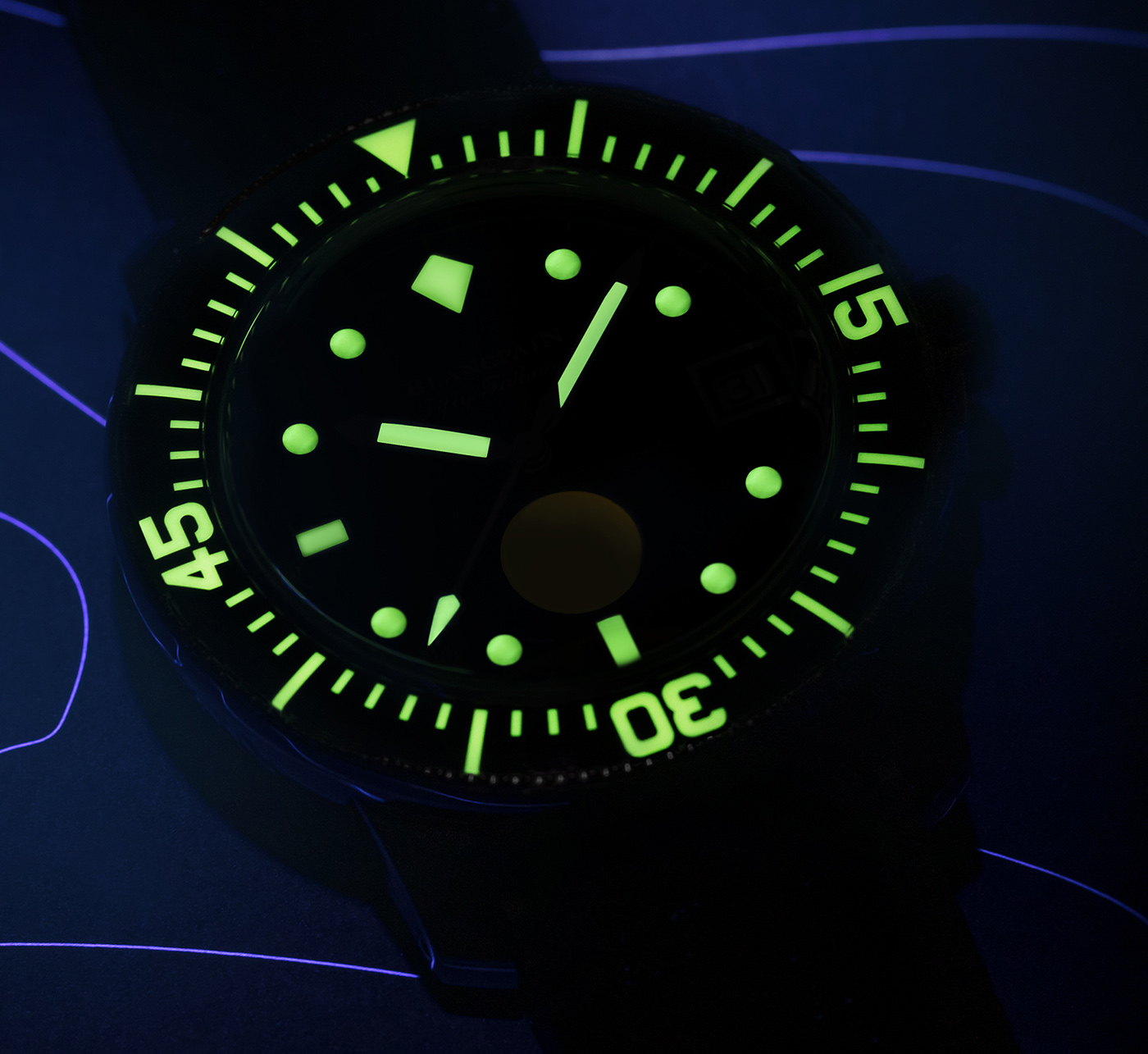