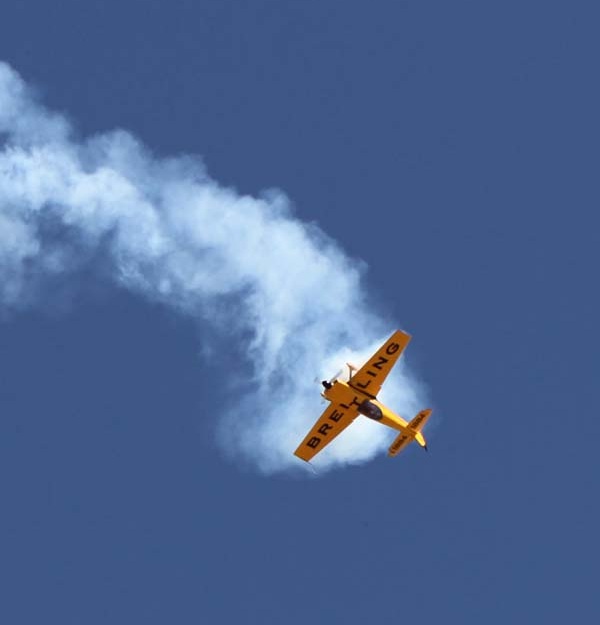 Breitling At The Reno Air Races

One of the major timepiece archetypes is the pilot (or aviation) watch. There are numerous brands with products that fit this category, a segment which is attractive to anyone with a fetish for flight or planes. Some brands have an actual history with aviation, some try to produce the best possible pilot watch for today, and many others simply try to emulate the concept of a stylish pilot watch. Anyone interested in aviation watches will have a range of models to choose from.

For a lot of people that choice is very easy. Actual pilots (both civilian and military) choose or aspire to own a Breitling watch. Those aren’t words from Breitling themselves. The Swiss brand does indeed have an historic connection to aviation going back a few generations, but that isn’t really important to me. Why? Well because a lot of brands can accurately state that. The last hundred years of aviation didn’t have just a few watch makers producing instruments and wristwatches for pilots. It was the combined effort of many brands. Others such as Rolex, IWC, Tutima, A. Lange & Sohne, and many others can honestly claim a deep connection with the evolution of the aviator’s wrist instrument. So why is it today that actual pilots seem to want and wear Breitling timepieces over most others? 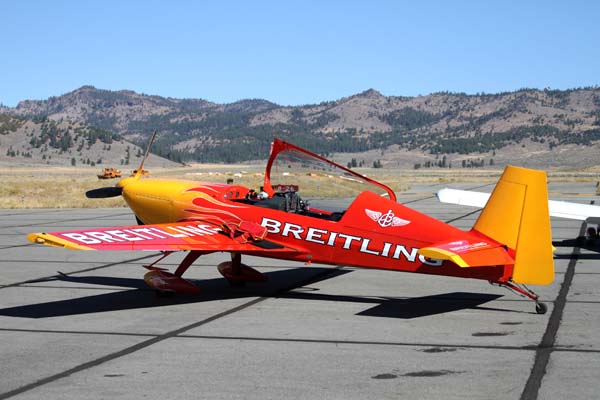 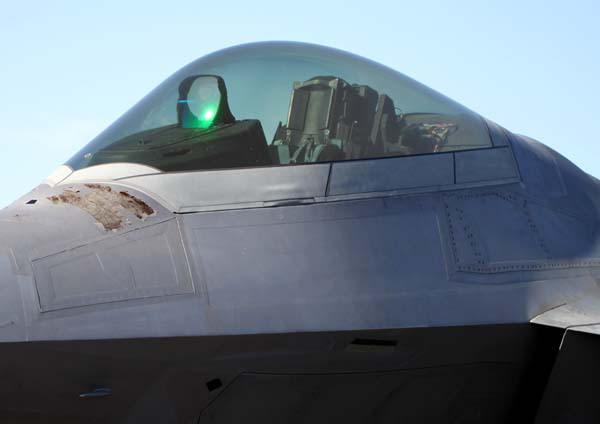 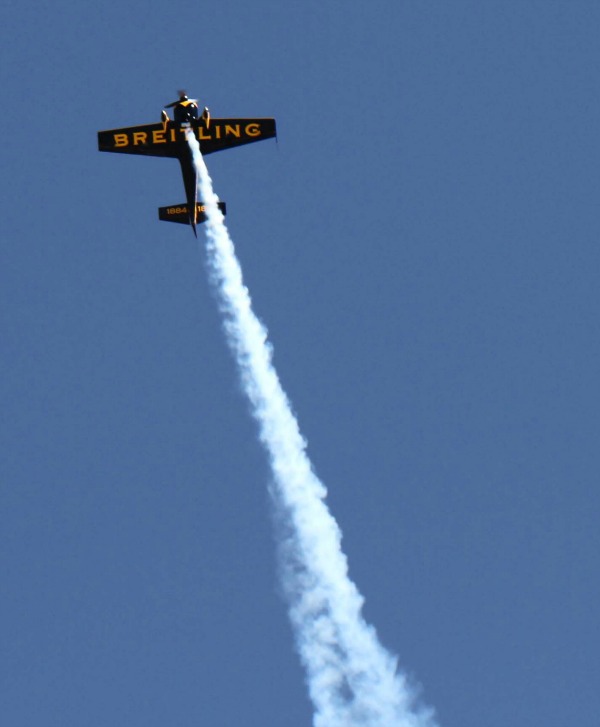 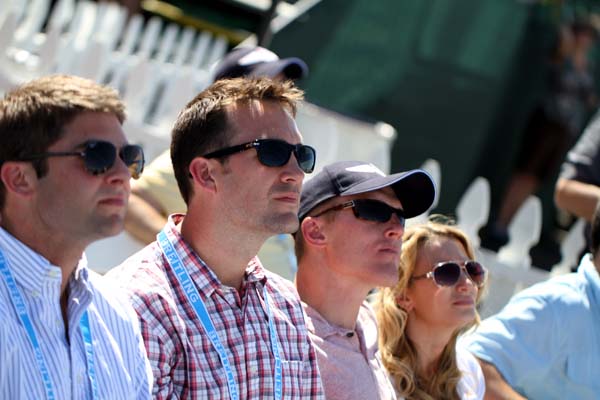 I don’t have all the answers, but I can share my own experiences. A few years ago I randomly met a guy whose job it was to fly a private jet for a wealthy individual. He traveled around flying this rich guy and his friends from place to place across the globe. He told me that he was a former military pilot who was lucky to have the admittedly cool job that he did. He was wearing a Breitling. I asked him why he bought the watch, and he didn’t have to think much about the response. According to him, owning a Breitilng was an aspiration held by most of his fellow military pilots as well as current pilot colleagues. It was known that Breitling was a solid watch, the brand participated in a lot of aviation events and advertised in aviation magazines, and was widely considered “really good looking.” To him, a Breitling watch is a status symbol for pilots that looks good and still gets the job done as a tool watch. Perhaps Breitling is to pilots what Rolex is to bankers. I found a similar sentiment among many other pilots and aviation professionals that I have since met. 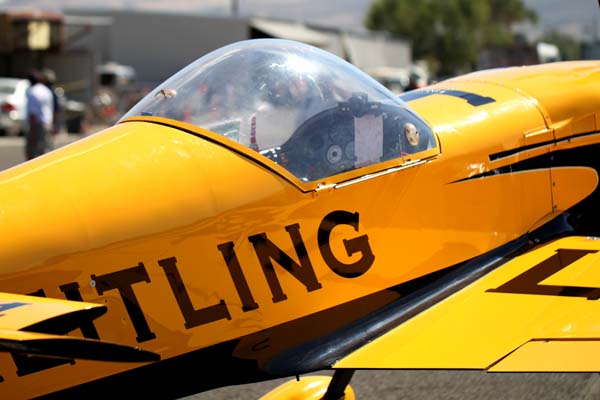 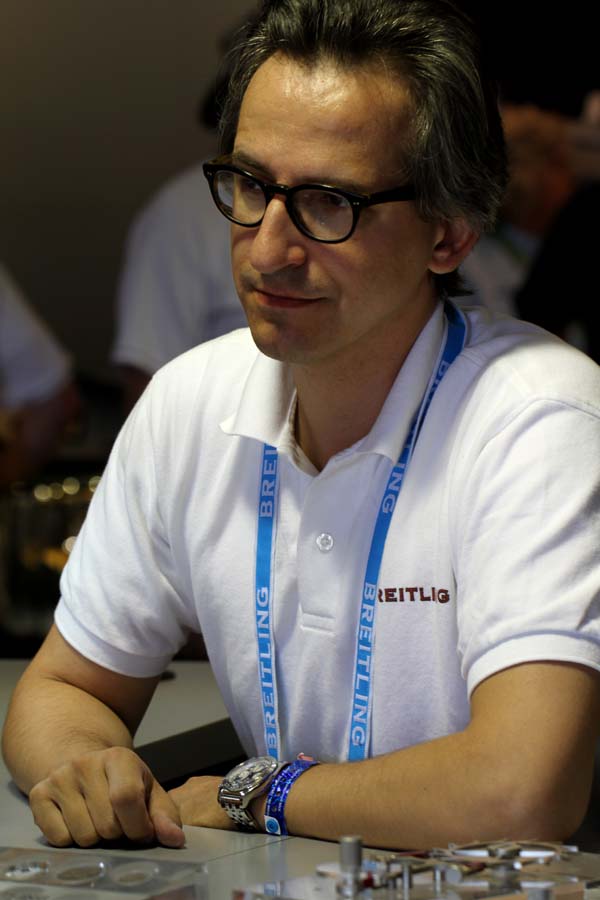 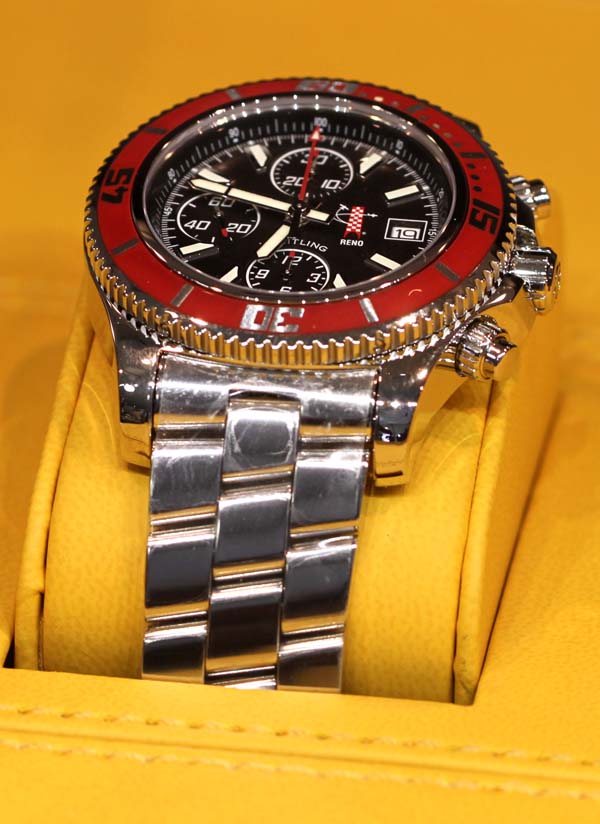 Military pilots for example make very little money. That goes for most people in the military. We like to point out that all of these high-end timepieces made for military use aren’t affordable by most people in the military. That is absolutely true, but what we don’t know is that in order to make them accessible, many of these brands have special programs that offer the watches to select military personnel at discounted prices. These are not wildly cheap prices, nor are they open to anyone serving in the military. Brands select special squadrons or units, and often make unique watches with their logos, etc… Government lawyers frequently mull over the prices to ensure that they are fair (not too low), and then the guys we want wearing high-end military watches are given a chance to do so. Deals like those are highly coveted by pilots and military people, as they are not as common as they might sound. For everyone else, watches like those by Breitling become an item of desire that they aspire to someday own.

What is so remarkable is how many actual pilots love Breitling watches. This is in contrast to mere aviation enthusiasts or watch collectors. For me, this is an important point because entire marketing campaigns by Breitling focus on their connection with flight. Any brand can choose on their own to have an association with an activity, but in this case it is true. Beyond that, hearing just why aviators like Breitling timepieces is interesting. 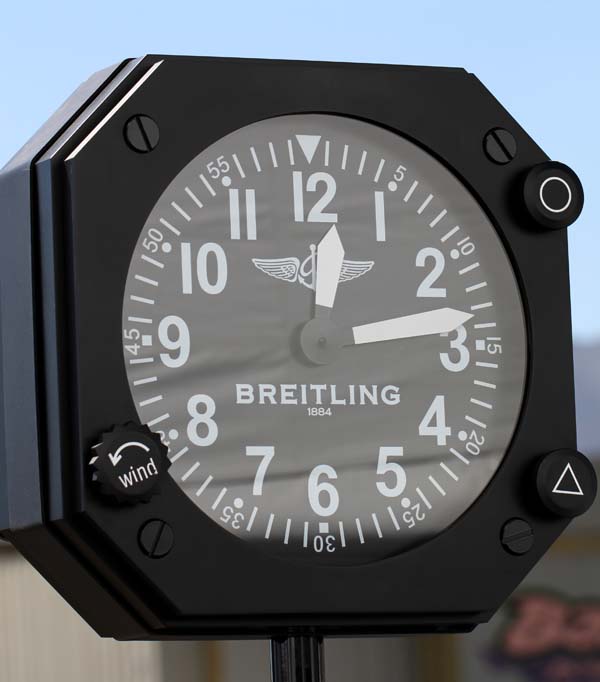 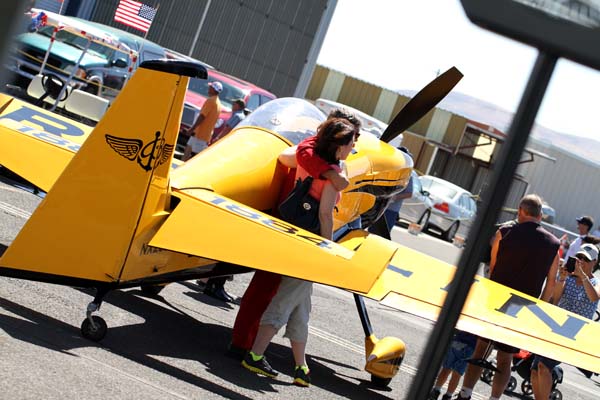 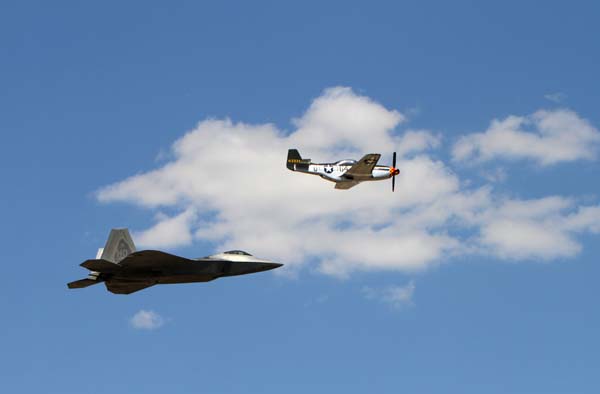 I think the admiral who oversees the Top Gun flight school said it best. He described his appreciation for Breitling making a durable, high-end watch that fit the needs and expectations of military pilot professionals. He then quickly added that it sure helped that the pieces were damn sexy. These guys like to look good, and for them a Breitling watch fits the needs of their lifestyle, but is also in their opinion, a great style piece.

In the United States, Breitling is among the top performing high-end watch brands. Like Rolex for example, Breitling is also a brand known by those who do not consider themselves “watch lovers.” A had an opportunity to visit Breitling at the 2012 Reno National Championship Air Race & Show this year to see how the event’s principle sponsor makes an appearance.

Breitling has been the major sponsor of the Reno Air Races for over a decade. The show is unrivaled in the United States (perhaps the world) because in addition to being an air show, they have air races. The air races are what make the event particularly interesting. Often flying modified vintage war planes, there is a huge “sky track” that planes race for the best time. It is exhilarating to watch over the course of several days and many planes compete in the circuit. Even though there are monetary prizes for the winners, the cost of participating in terms of preparing the planes often exceeds the potential prize money. This is another one of those passion hobbies for extremely dedicated individuals who have money. In other words, a perfect connection for an aviator’s watch brand. 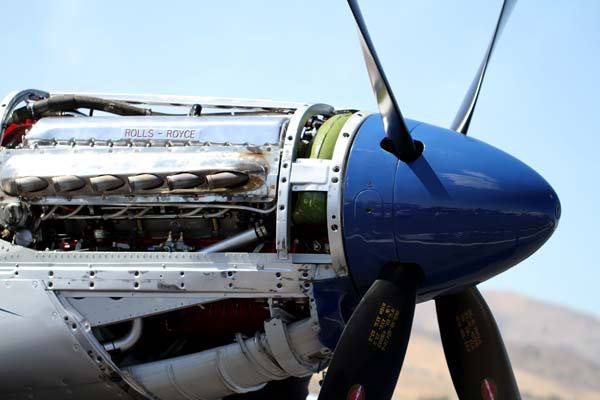 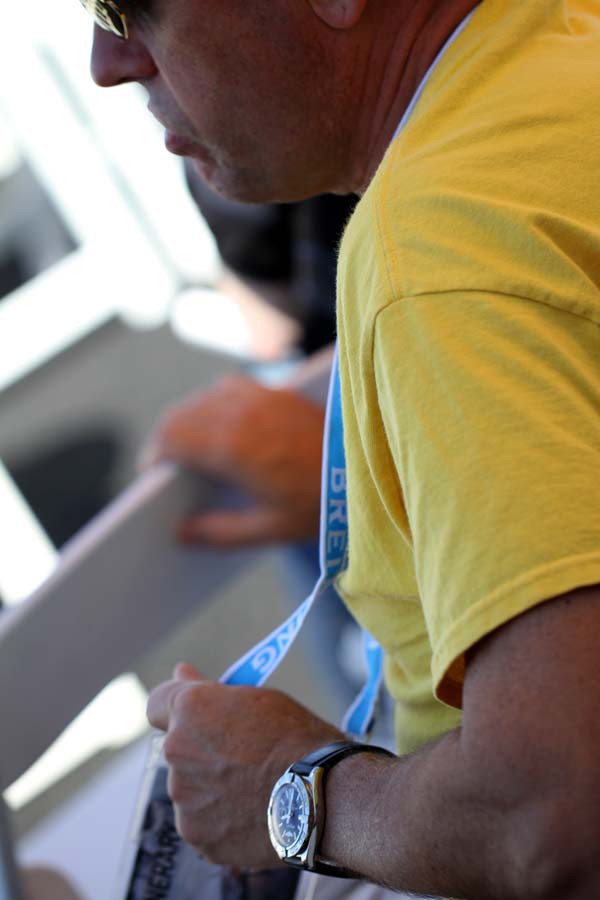 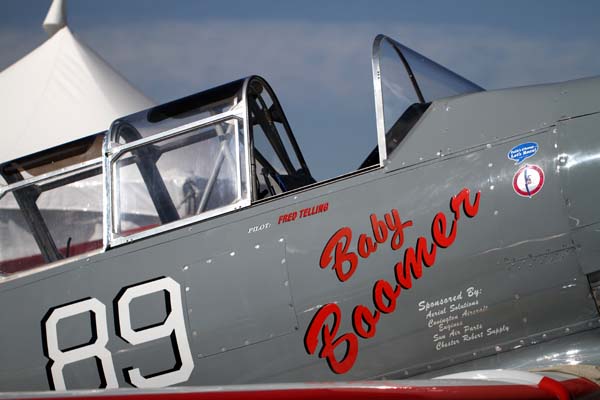 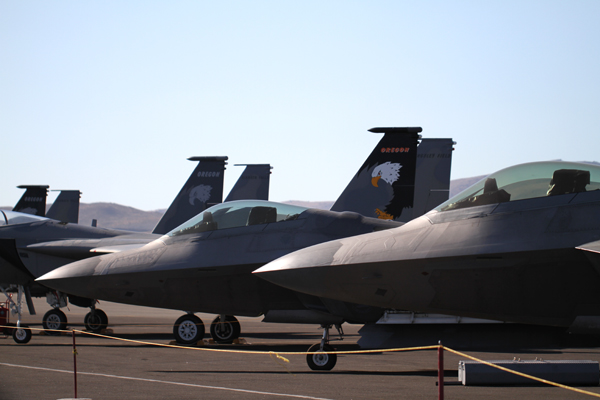 Breitling sets up there with a tent that includes a show and information about Breitling watches. It is surprising to see the number of show attendees walking around that are wearing Breitling timepieces. Each year Breitling produces a limited edition watch for the Reno air races – and they are sold right at the show from the Breitling tent. Of the 50 pieces made for 2012, about 30 were sold at the show. Breitling’s connection to the events are very deep. There is a Breitling stunt plane that entertains the audiences, and well as impressive Breitling branding around the event. It is a cool place to be, and is unlike any other air show that I have been to before.

The limited edition piece for the 2012 aviation event is slightly ironic being a dive watch. It is the Breitling Superocean Chronograph II 44mm Limited Edition Reno National Championship Air Race & Show 2012 timepiece. Special for this model is a red vulcanized rubber bezel inlay, and applied Reno air races logo on the dial. It does not appear as though the marine theme of the watch puts off any buyers. The unsold pieces will be distributed to a handful of Breitling dealers. 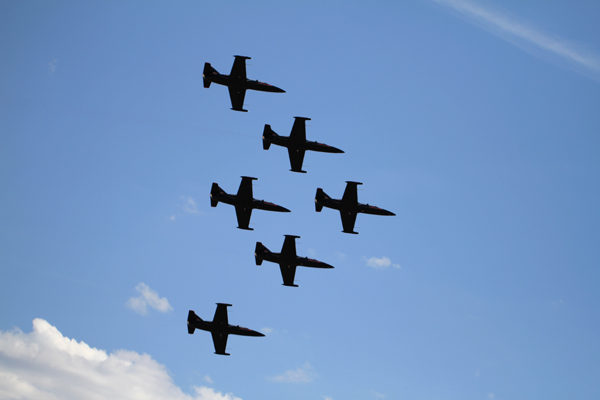 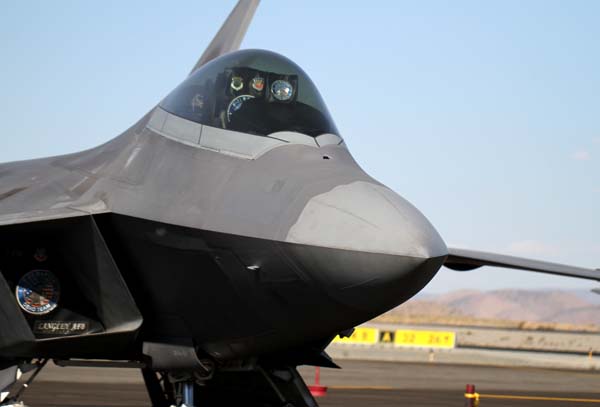 There are admittedly a range of good aviation watch choices, Breitling being among them. However, there are some unique products that Breitling sells which the others don’t. For example, Breitling continues to offer a range of high-function, highly accurate Super Quartz movement-based timepieces. In the luxury watch business, quartz is sort of the enemy, but these movements by Swiss ETA are the thermoline models which are accurate to 10 seconds per year. What began with the Breitling Aerospace model continues into a range of pieces coveted by many aviation professionals. Being an independent company, Breitling can really do whatever they like, and I applaud their distinct attention to the needs of actual professionals versus producing exclusively luxury lifestyle products. Have no doubts though, you can easily get a solid gold Breitling with diamond decoration.

Next year is the 50th anniversary of the Reno Air Races and for sure Breitling has some special things planned. Breitling employees operate with a relaxed confidence you see in a brand that does well, but that also has some very good competitors. They aren’t smug, but they are sure of themselves as they continue to enjoy healthy sales and popularity worldwide. I think their honest connection and appreciation among the people who they tend to make timepieces for is a key to that success.