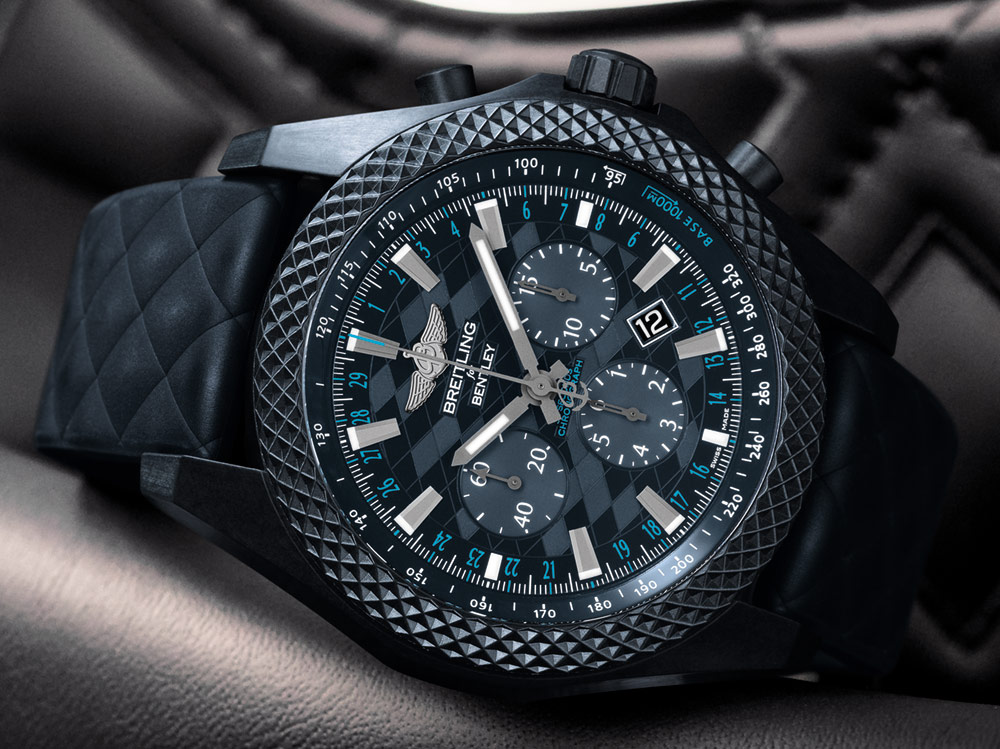 The latest from Breitling for Bentley takes a little swerve from the typical models coming out of the collection. The Breitling Bentley GT “Dark Sapphire” Edition releases on the heels of the 2018 Bentley Continental GT unveiled at the Frankfurt Motor Show earlier this year and may help scratch the itch of those eagerly waiting for the car to hit the streets. Featuring a 30-second chronograph, a rubber strap, and Breitling’s proprietary “Breitlight” case material, the Dark Sapphire will be remarkably light, useful, and more rugged than previous models for Bentley – not to mention a darker and more brooding approach to the collection. 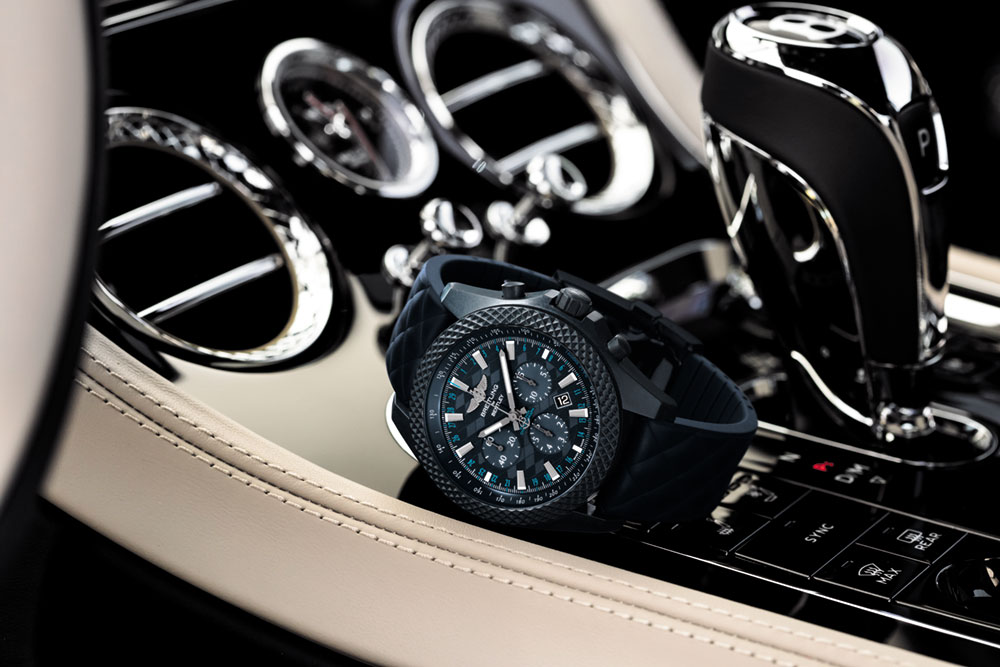 Breitlight is a form of carbon polymer that feels like something between carbon fiber and ultra-hard plastic – it is incredibly light and durable. Breitling also claims it is more resistant to scratching, magnetism, corrosion, and heat. Cases made out of carbon materials aren’t necessarily new, as we have seen a welcome influx of carbon used in luxury sport watches, so it was only natural for Breitling to adopt their rendition of that trend. We first saw the Breitlight material in 2016’s Breitling Avenger Hurricane (hands-on here) followed later by the Colt Skyracer. 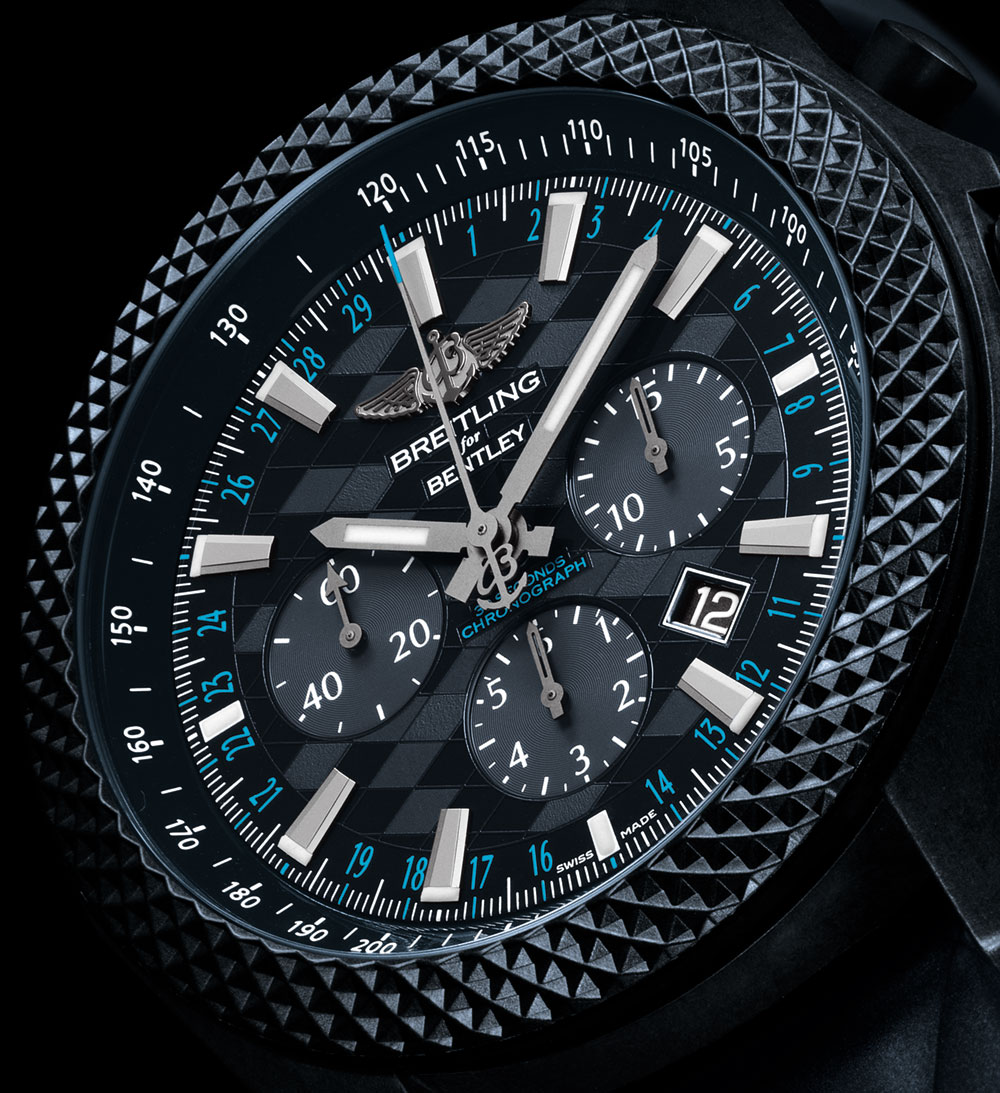 To illustrate how light it is, it’s over 3-times lighter than titanium. Having handled the Avenger Hurricane last year, I found the material to be really neat, and almost too light. While the Avenger Hurricane measured in at 50mm, you would have never guessed its size by feeling the weight, which I described at the time as feeling equally as odd as it did cool. The Breitling Bentley collection has seen carbon versions of existing models, but this is the first model to use the Breitlight case material and I’m hoping that it feels more “cool” and less “odd” on the wrist in a slightly smaller case. 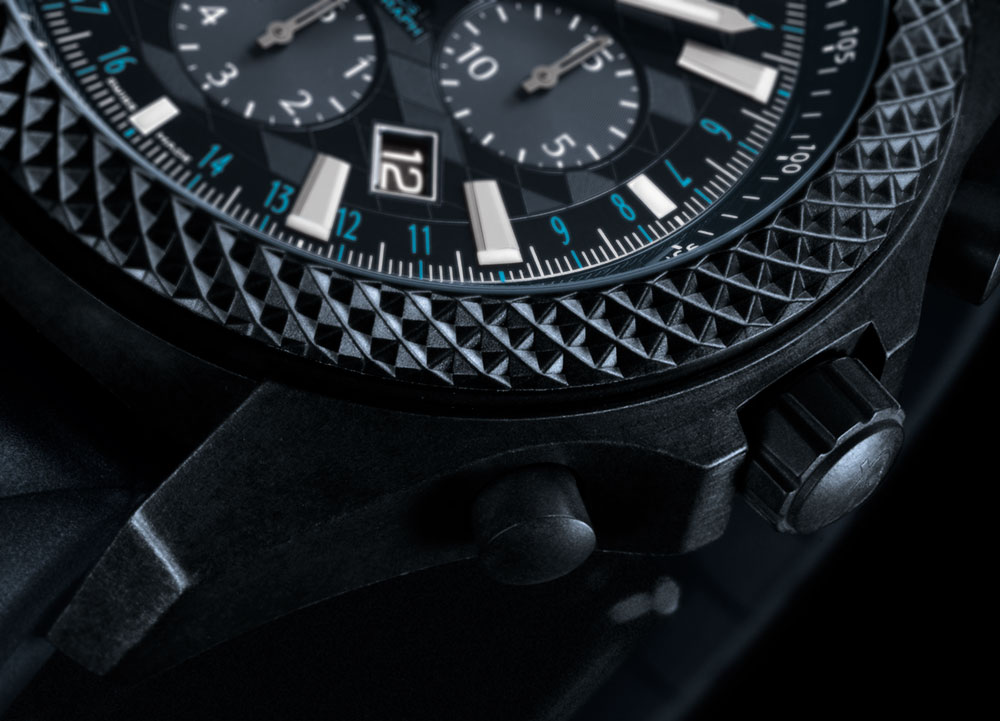 The 100m water-resistant case is infused with “blue-ish tints,” and measures in at 48mm, which isn’t outlandish for Breitling or the Bentley collection, but it is not subtle either. The diamond-patterned rubber strap fits the overall design, and does a great job of channeling the interior design scheme of the 2018 Bentley Continental GT. When paired with the diamond-pattern printed on the dial, and the diamond-patterned hobnail bezel that is a signature of the Breitling for Bentley watches, there is a lot to unpack at a glance, but it feels like an extension of the car – and that’s a refreshing success. Breitling has always been good about Bentley-inspired elements in the past, but I’ve felt the latest models (B06-S excluded) steered away from the cars themselves, and that was disappointing to me. The Breitling Bentley GT “Dark Sapphire” Edition definitely feels like it’s from the same mold as its inspiration. 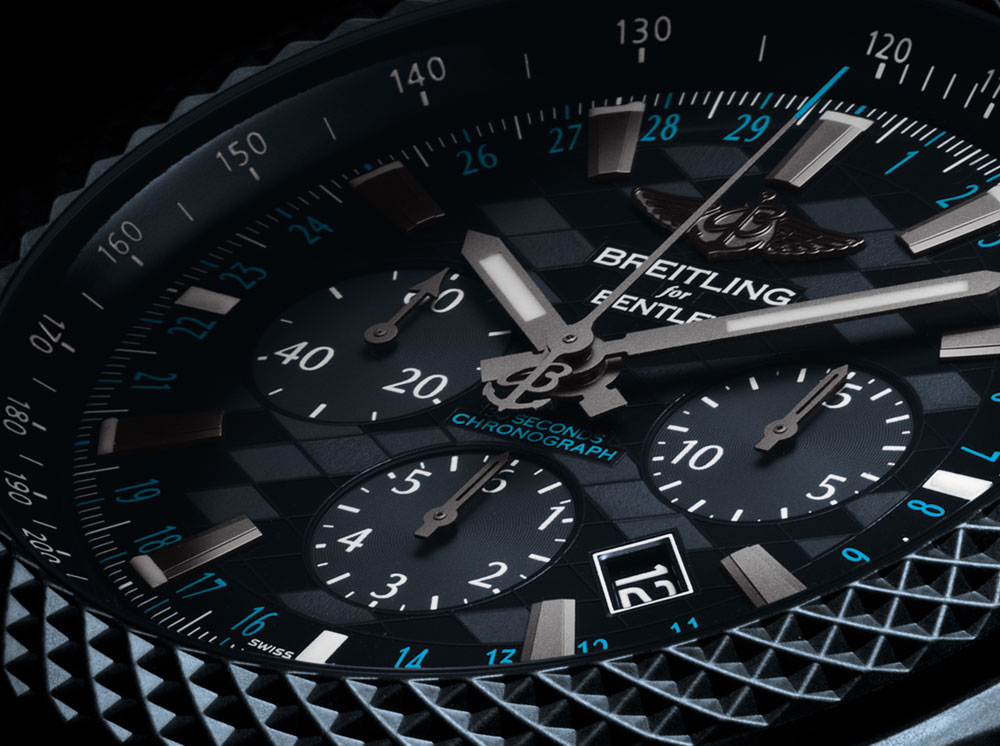 The Breitling Bentley GT “Dark Sapphire” Edition houses one of the newest Breitling “engines” – the Caliber B06. It shouldn’t feel unfamiliar as the Dark Sapphire shares a number of design similarities to the Bentley B06-S Carbon released last year. The COSC-certified, in-house Breitling movement boasts a unique feature from a 1926 Breitling patent – a 30-second chronograph utilizing a central seconds hand. When activated, the hand will sweep around the dial in a half-minute interval ensuring accuracy up to 1/8th of a second marked by a 30-second chapter ring. 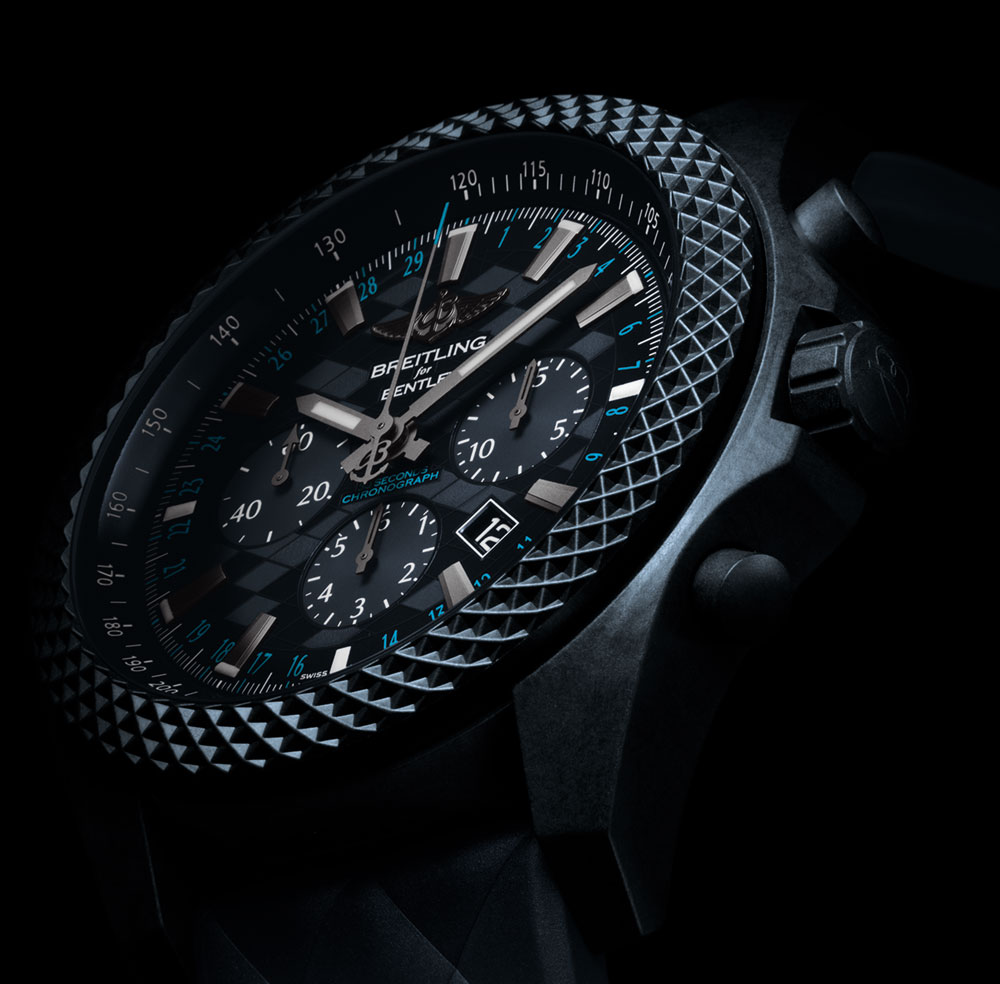 The dial and the movement share a unique relationship to each other because a feature like the central chronograph requires a dial to be built around it. The chronograph registers are located at the 3, 6, and 9 o’clock positions with a date window at 4:30. Despite the date window being in a divisive location for a sport watch, Breitling did a great job of designing a legible dial around the core central 30-second chronograph feature. Adding to legibility are the applied indices and bright “Bentley Blue” accent colors along the tachometer and chapter rings – complemented by a blue tipped seconds hand to help with visibility in the admittedly busy dial design. Applied predominantly under the lumed hands very close to the center is the text “30 Second Chronograph” in the same blue color. Additionally, the Breitling Bentley GT “Dark Sapphire” Edition features a domed sapphire crystal, AR-coated on both sides, and an impressive 70-hour power reserve. 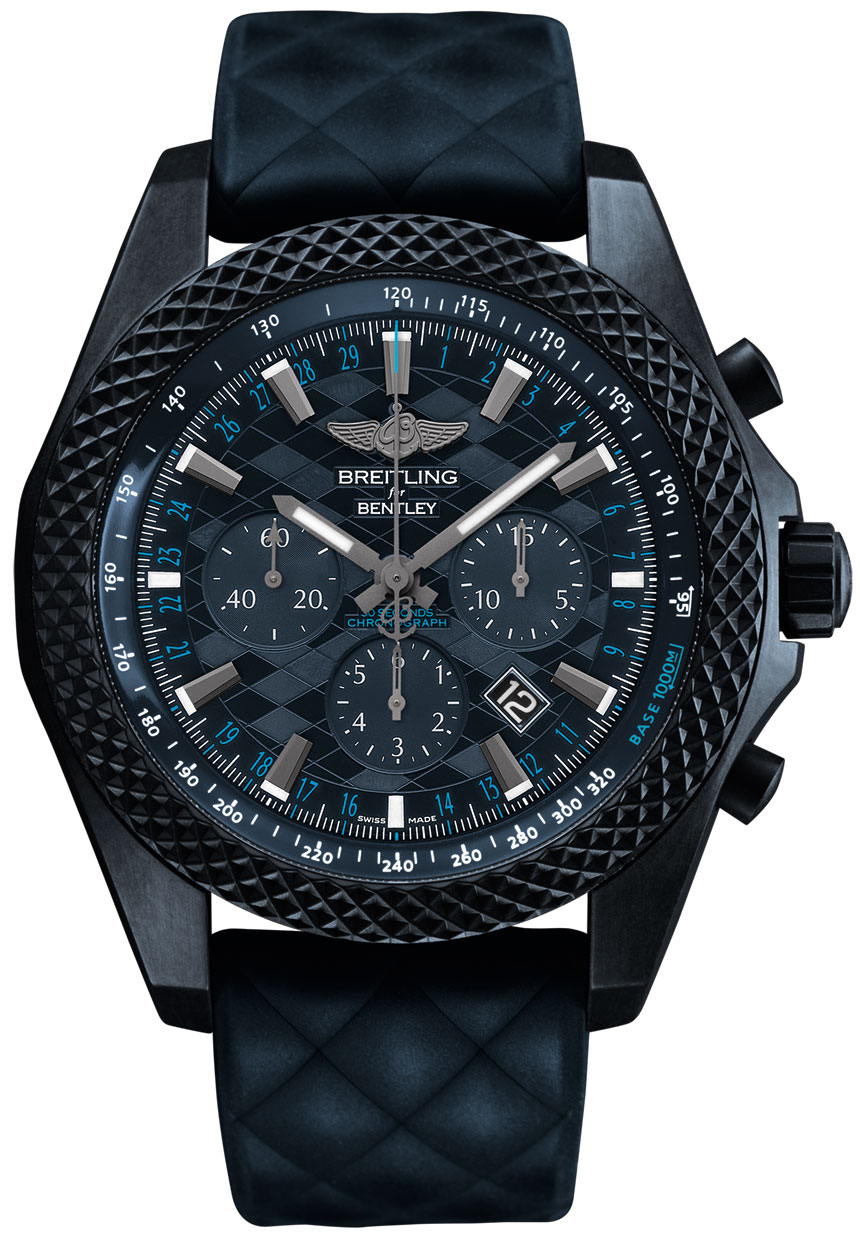 With the recent shakeups in Breitling management, I’m encouraged to see a solid addition to the Breitling for Bentley collection. The Breitling Bentley GT “Dark Sapphire” Edition was an unexpected model that fits among the Bentley collection without feeling out of place. The Breitlight case, rubber strap, and moody persona gives it a rugged-sporty appeal that certainly won’t fit everyone’s taste, but I believe it will find its niche among Breitling enthusiasts nonetheless. The Breitling Bentley GT “Dark Sapphire” Edition will be limited to 500 pieces (so get a hold of them quick), and comes with a price tag of $9,965. Learn more at the Breitling website here.