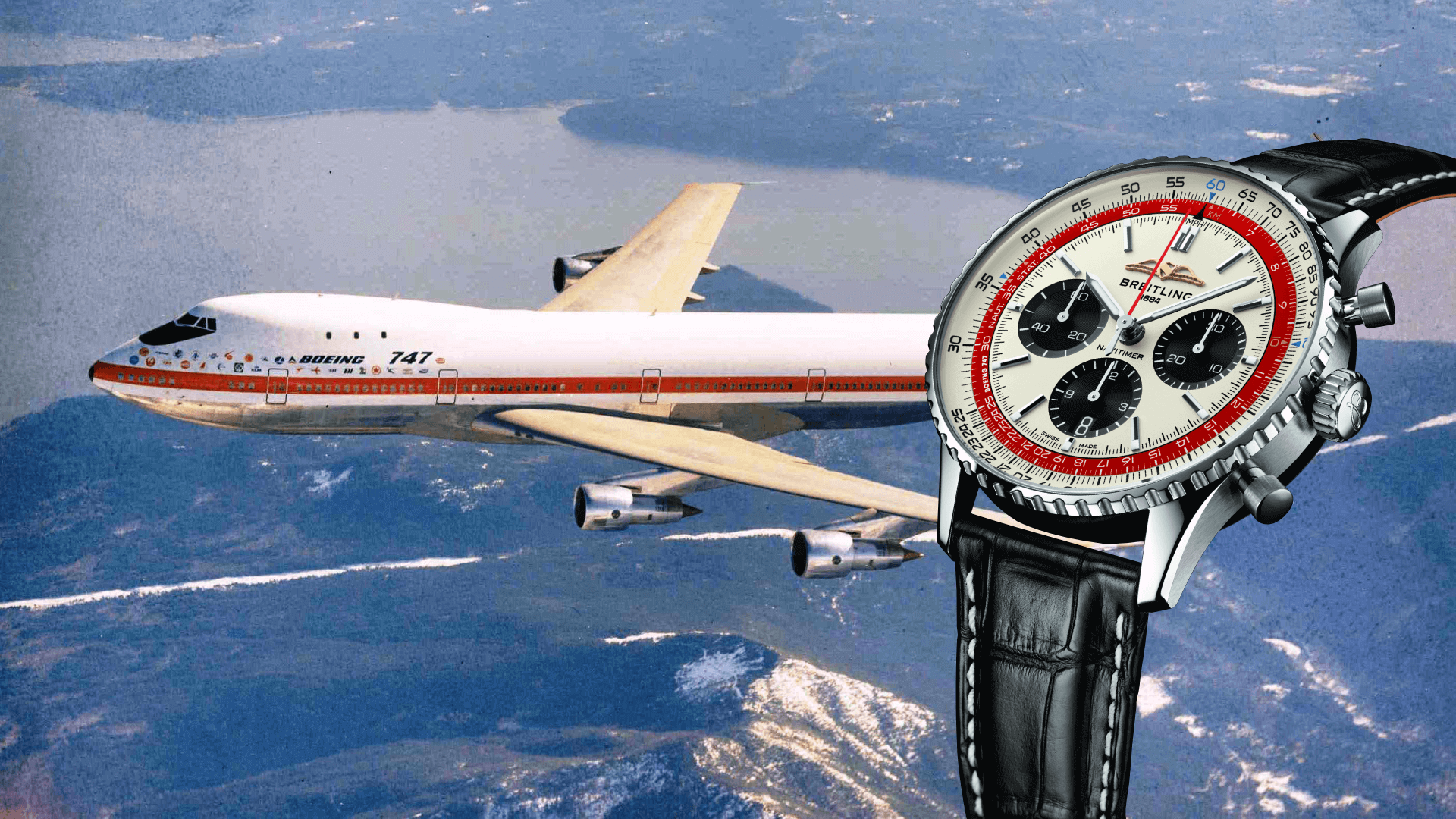 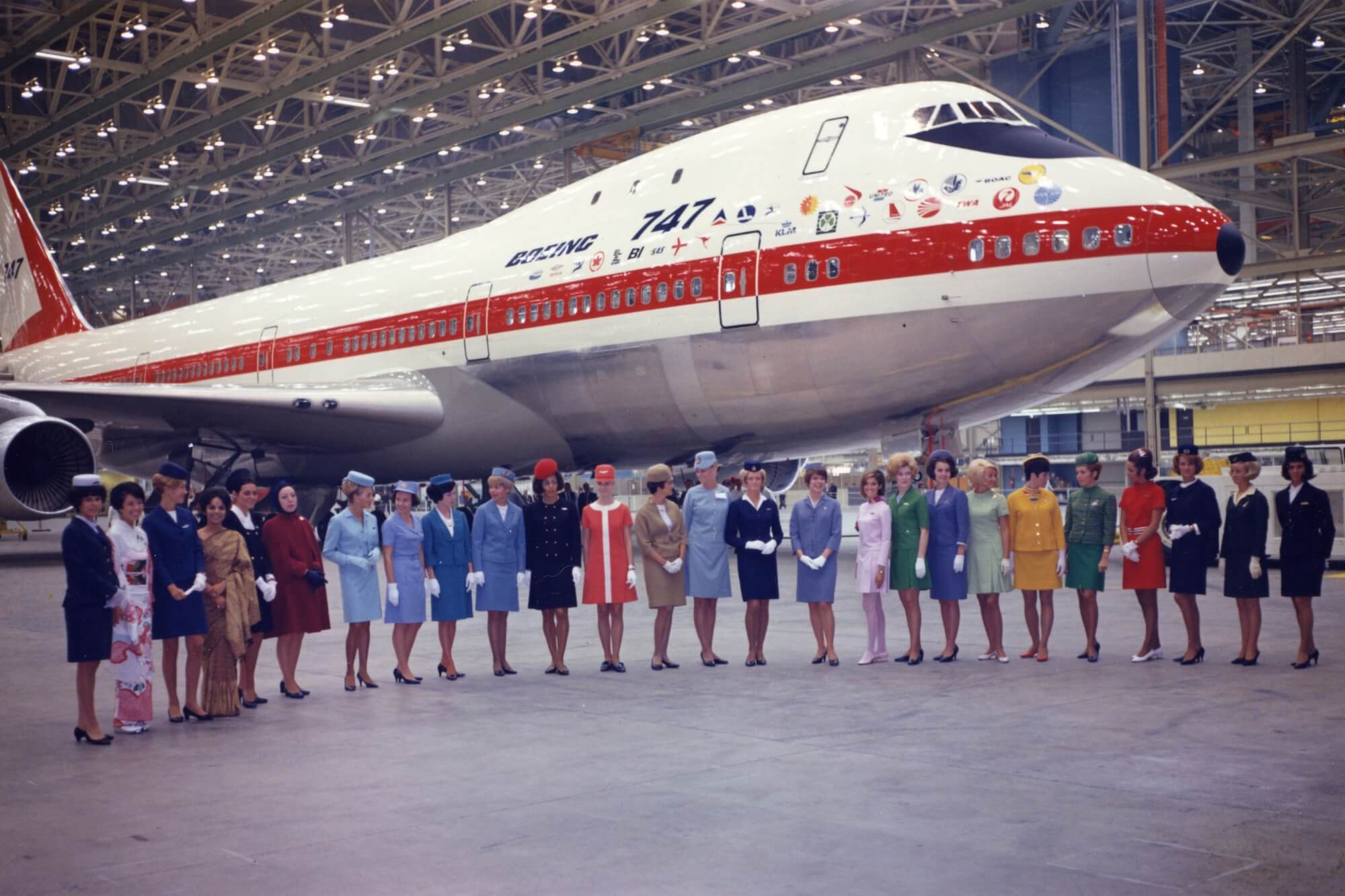 In case you haven’t heard, production of the Boeing 747 has stopped. The final plane rolled out of the company’s Everett, Wash., plant in early December 2022, and was delivered to air cargo line Atlas Air. Perhaps it was not the most fitting conclusion for the plane that ushered in the age of accessible long-haul flights and new levels of luxury. Introduced in 1967, Boeing produced 1,574 747s in various configurations, for various uses, but the jetliner was arguably most famous for its double-decker commercial configuration, with an upper deck originally designed for use as a luxurious lounge space accessed by a spiral staircase. Despite the changes it ushered in for commercial air travel, the plane saw its popularity wane as newer jumbo jets came to market and traveler preferences and habits shifted. So it was that the Boeing 747 was discontinued and while the final 747 may have not been delivered to an iconic airline befitting the moment, Breitling has stepped in to fill the ceremonial gap with the limited edition Navitimer B01 Chronograph 43 Boeing 747. 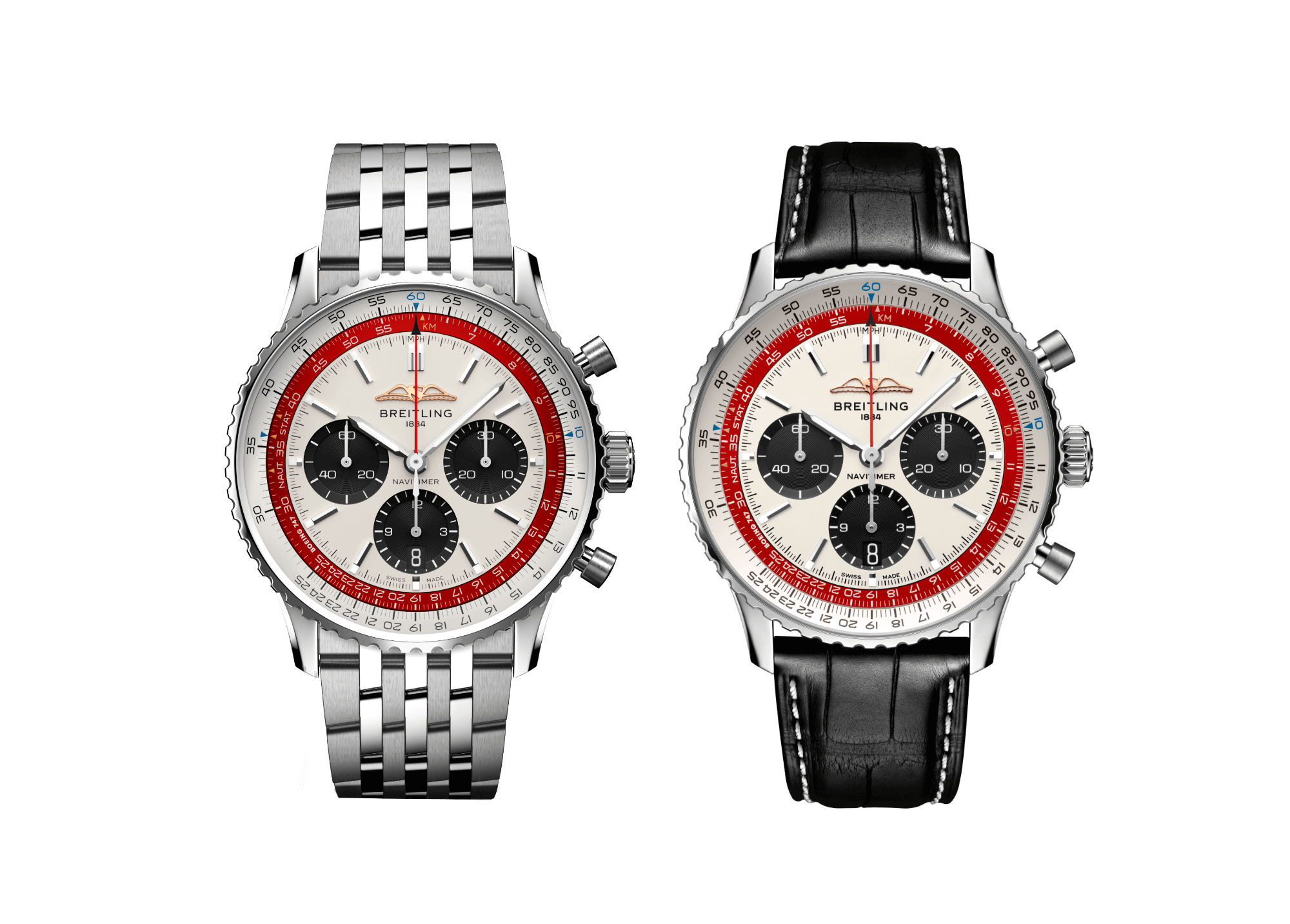 There may not be a more iconic pilot’s chronograph than the Navitimer. To be sure, the Navitimer is one of the most recognizable chronographs ever made. Its distinctive circular slide rule, present since its introduction in 1952, makes sure of that. The new Beoing 747 LE keeps things simple, and since Breitling hasn’t been shy about using color on its flagship chronograph, it won’t be jarring in the least. To honor the jumbo jet, Breitling has matched the dial to the livery of the original 747, with a cream-colored central dial and a red inner slide rule scale; the outer slide rule scale remains white, with blue accents. Snuck between the numbering on the red scale is the second nod to the jumbo jet, “BOEING 747.” As with any Navitimer chronograph, you’ll either find the slide rule a neat quirk held over from the past or an unnecessary adornment that clutters the dial. In either case, you’ll probably never use it, and if you’re like me, you’ll never even know how (though I hear you turn it with the ridged bezel). As consistent in the collection as the slide rule, the AOPA wings logo is present at 12 o’clock. Rounding out the dial are black sunken registers with radial grooving and a black date window nicely nestled at the 6 o’clock counter. The applied indices and handset are all fully polished with Super-LumiNova, with a red chronograph hand to match the accented dial. 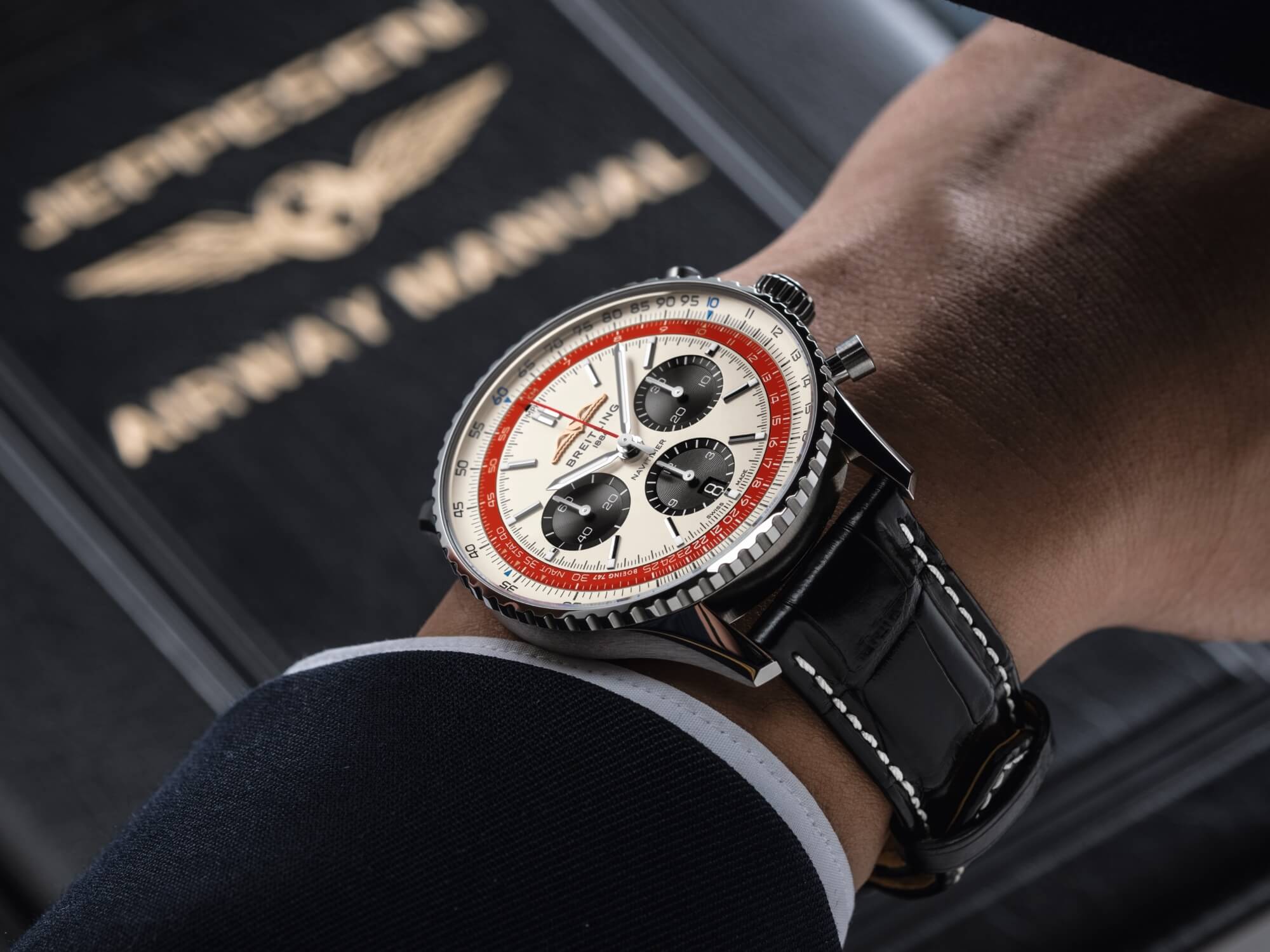 Breitling has opted to use the 43mm Navitimer for this model, an interesting choice given the brand just released a 41mm Navitimer more in line with current sizing trends. But Breitling is as known for its enormous watches as anything else, so it could’ve been even larger. The case is exactly what you know from the Navitimer line: just over 49mm from lug-to-lug and a not terrible, not great 13.69mm thick. The long, straight, polished lugs have a matching polished chamfer that expands as it reaches the blocky termina, which are brushed at the ends, complementing the horizontal brushing of the caseband. Pump pushers flank the branded pull-out crown, which, despite having two gaskets, limits the watch to 30m of water resistance (rather low by modern standards, especially for a non-dress watch). The sapphire crystal is domed with anti-reflective coating. As evident in the included press photo above, this watch will wear prominently on the wrist, which is unsurprising given the height and straighter lugs. The watch is available with a padded black alligator strap with a folding buckle or Breitling’s signature seven-row steel bracelet. 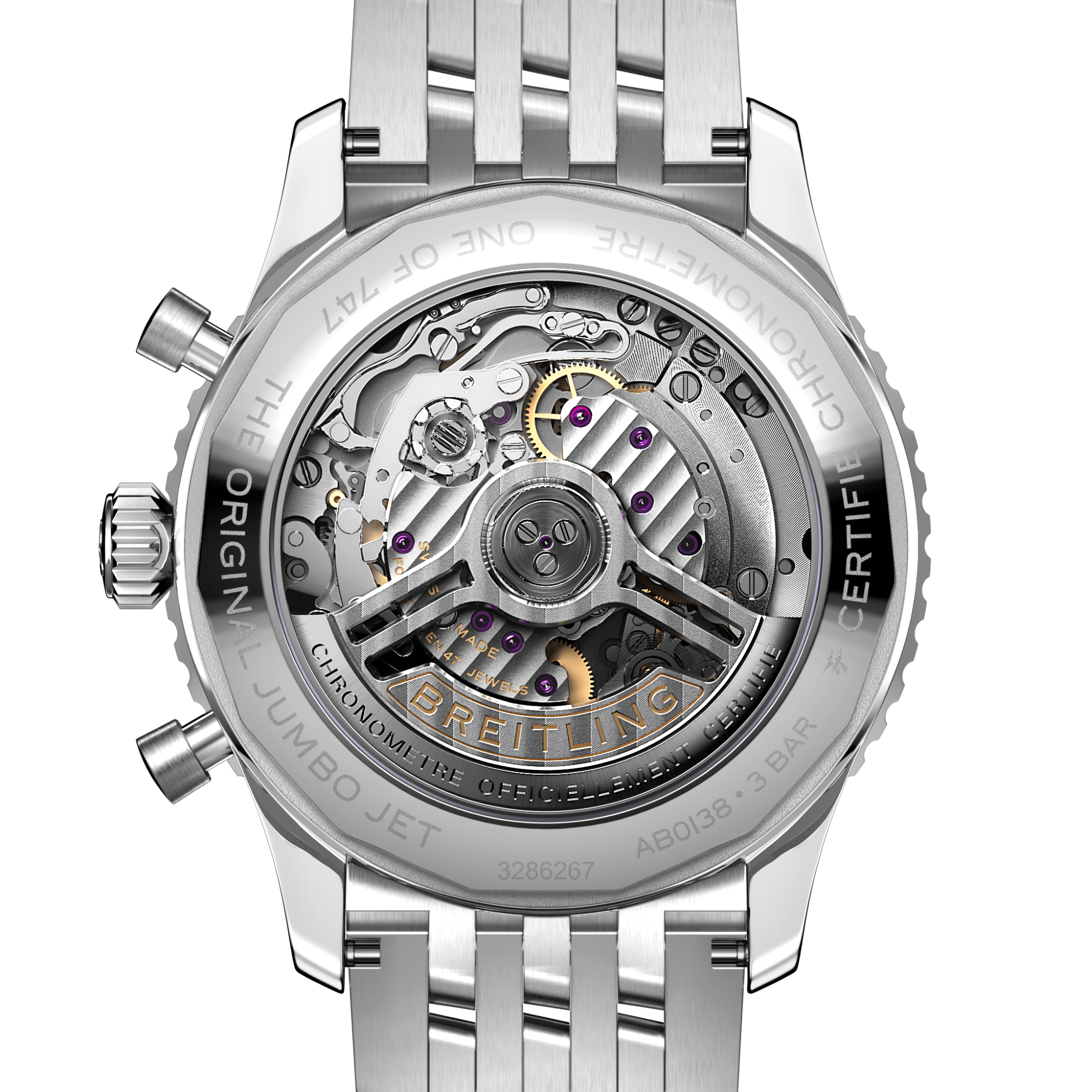 The Navitimer Boeing 747 runs Breitling’s in-house Caliber 01, first introduced in 2009 and now standard on Breitling’s chronograph models. The 47-jewel movement is chronometer-certified by COSC and features a column wheel chronograph mechanism with a vertical clutch for smooth timing action. It beats at 28,800 vph with a power reserve of 70 hours. The caseback puts the movement on full display through a sapphire crystal and is engraved with limited edition numbering and “The Original Jumbo Jet.” Given the display, it’s nice that Breitling has done a bit of extra work in decorating the movement: the rotor is engraved with gold and features striping that is repeated on the bridges underneath. 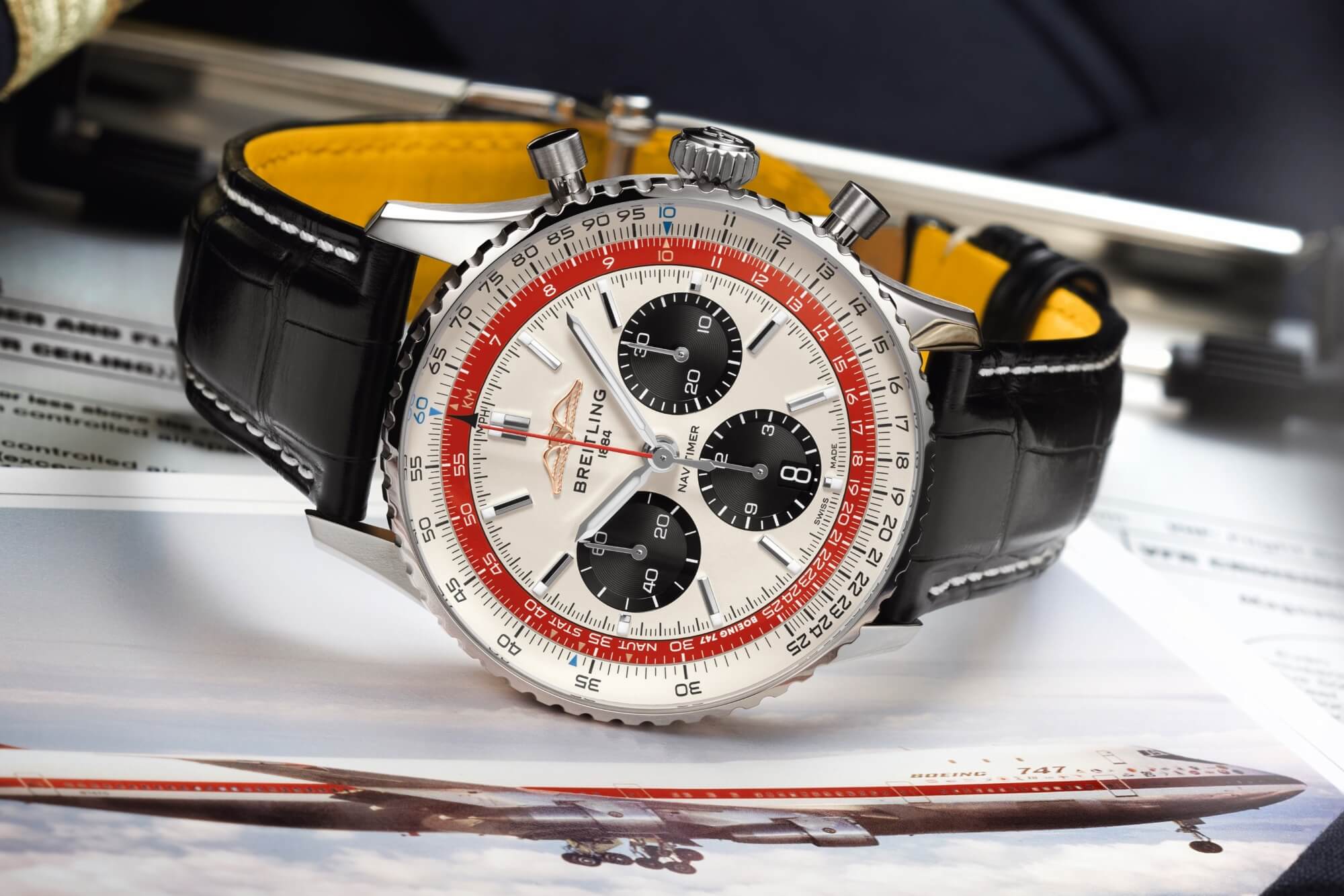 I’m no aviation buff, nor do I own any chronographs (can you imagine?). On top of that, I’m growing tired of commemorations and collaborations, which these days seem less and less meaningful and more and more transparent in their financial motivations. That said, I’m a fan of this watch. I’m a fan of the colorways that match the original Boeing livery. I’m a fan of how the Boeing aspect isn’t in-your-face. And I’m a fan of an iconic pilot’s watch commemorating an iconic jet. It all makes sense, and it seems to be executed perfectly. My only desire is that they had chosen the new 41mm Navitimer case. Although I’d argue this watch is an ideal way to mark of the end of the 747, it can also stand as an ideal way to create a collaborative or commemorative watch—instead of slapping a logo on the dial, infuse the watch with design cues from the source. The Breitling Navitimer B01 Chronograph 43 Boeing 747 is priced at $9,400 on leather and $9,800 on the bracelet, and fittingly limited to 747 pieces. For more information, please visit the brand’s website.