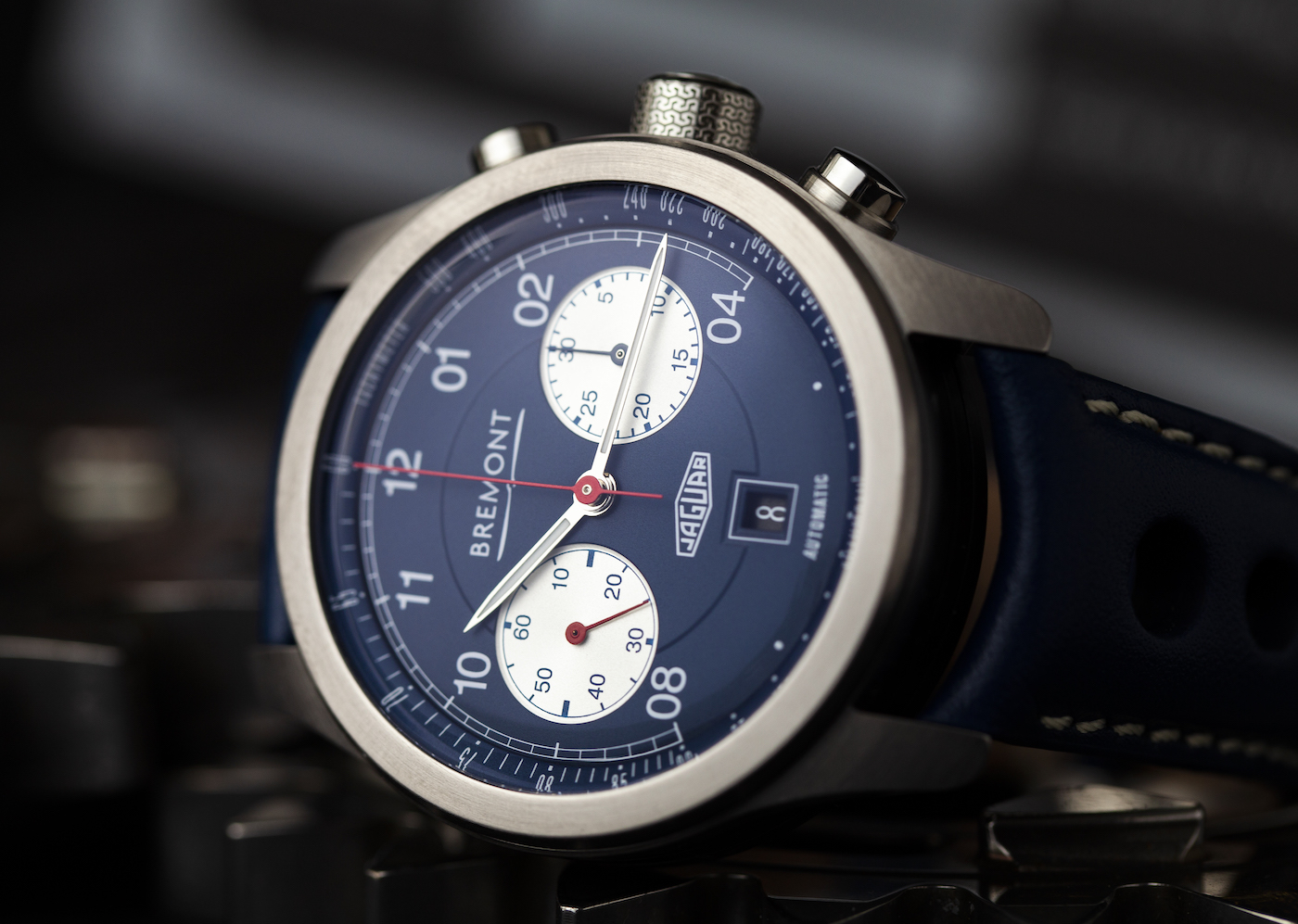 English watchmaker Bremont has released the Bremont Jaguar D-Type Chronograph watch. This is the fifth installment in the Jaguar collection on general release (the sixth overall), joining two chronographs (the MKII in either white or black) and two time and date options (the MKI and MKIII). Like the two chronographs before it, the D-Type employs a nicely decorated BE-50AE, which uses an ETA 7750 as its base. The MKII chronographs and this new, blue-dialed D-Type offer a highly functional and attainable option in a collection that debuted with its most expensive (and exclusive) model back in 2014. 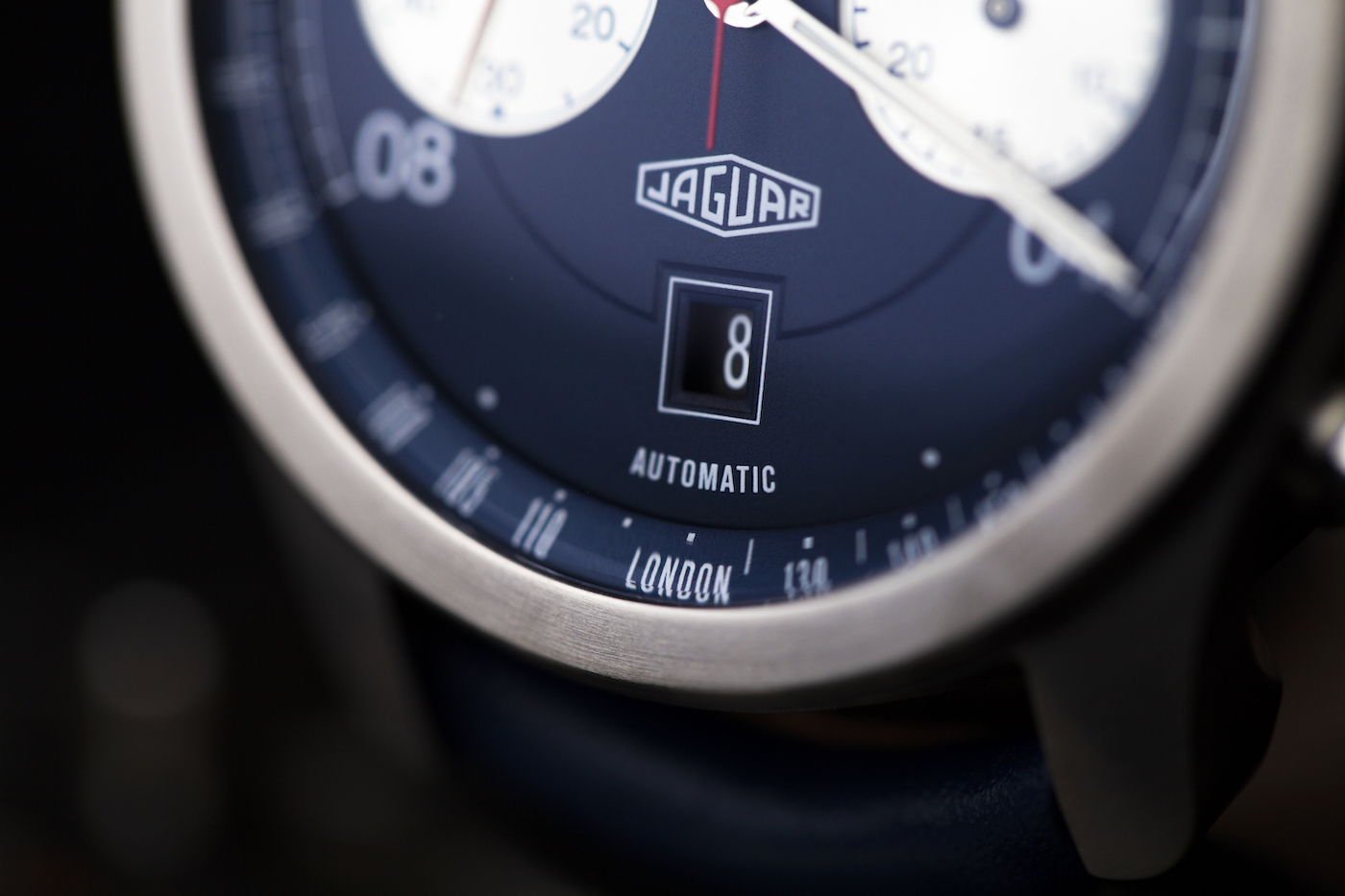 The whole Jaguar partnership makes quite a bit of sense for Bremont, given both brands’ tireless Britishness. Although Bremont is, first and foremost, an aviation-centric brand, the military connections, and general patriotism are never far from the core message. Jaguar is an iconic brand and the perfect cross-industry partner to elevate Bremont’s status in the minds of a new, potentially untapped client base — classic car fanatics. 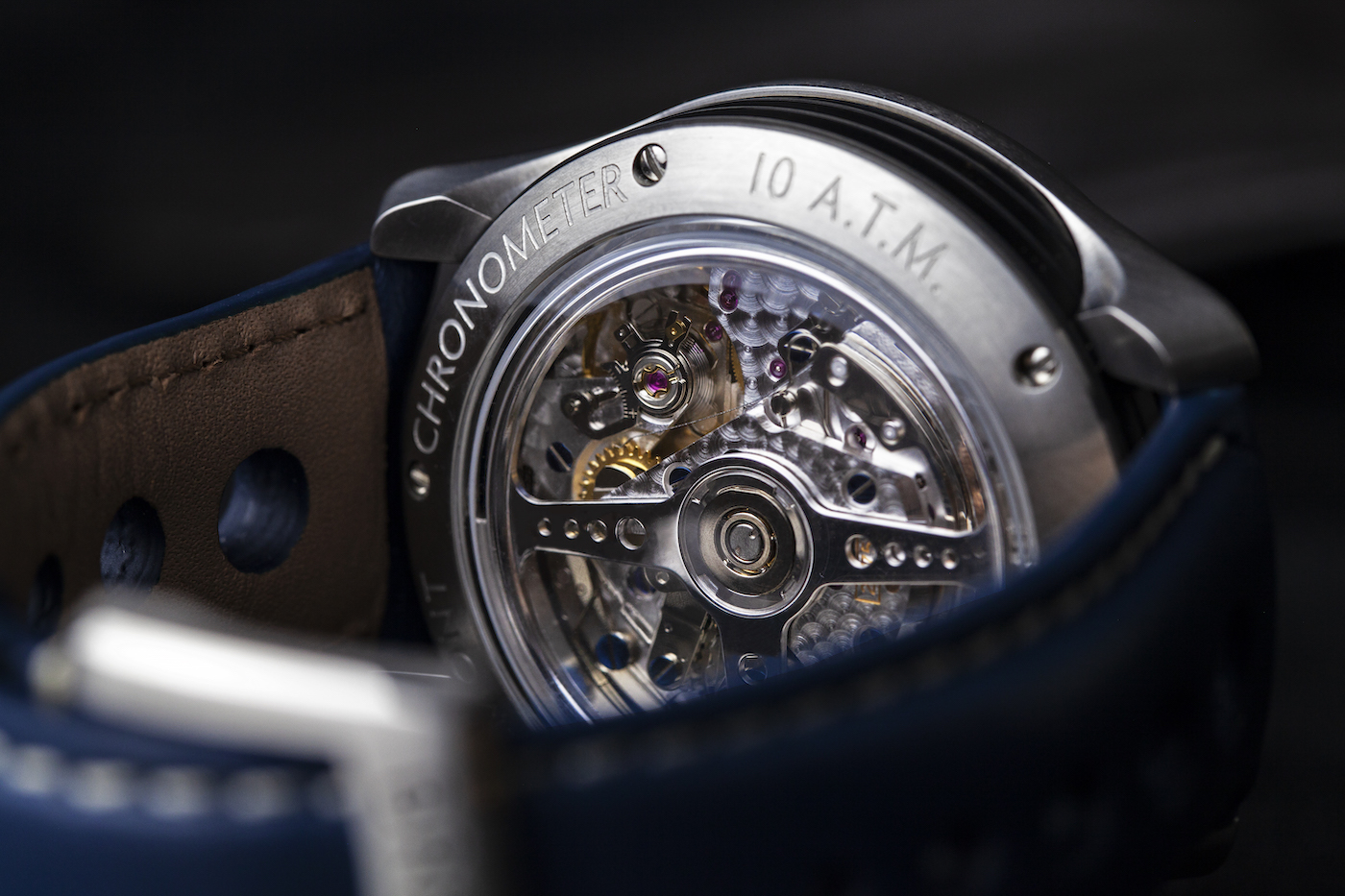 The very first Bremont Jaguar released was produced as an extremely limited accompaniment to the release of six restored Jaguar E-Types. You only got the watch if you got the car. Although we recently saw TAG Heuer pull the same stunt, it’s still quite an unusual move, and was no doubt rankling for hundreds of customers with the ready cash to buy the watch, but not the car. That watch, the Bremont Jaguar E-Type Lightweight, was powered by the seldom-used BWC/01, which is a proprietarily modified La Joux-Perret 6901, also fitted to Bremont’s ultra-expensive Wright Flyer models. It was a beautiful watch, but it was never planned for general release. The following Bremont MKI used the same case and dial design but added a 6 o’clock date, thanks to the slightly upgraded BWC/01-10. 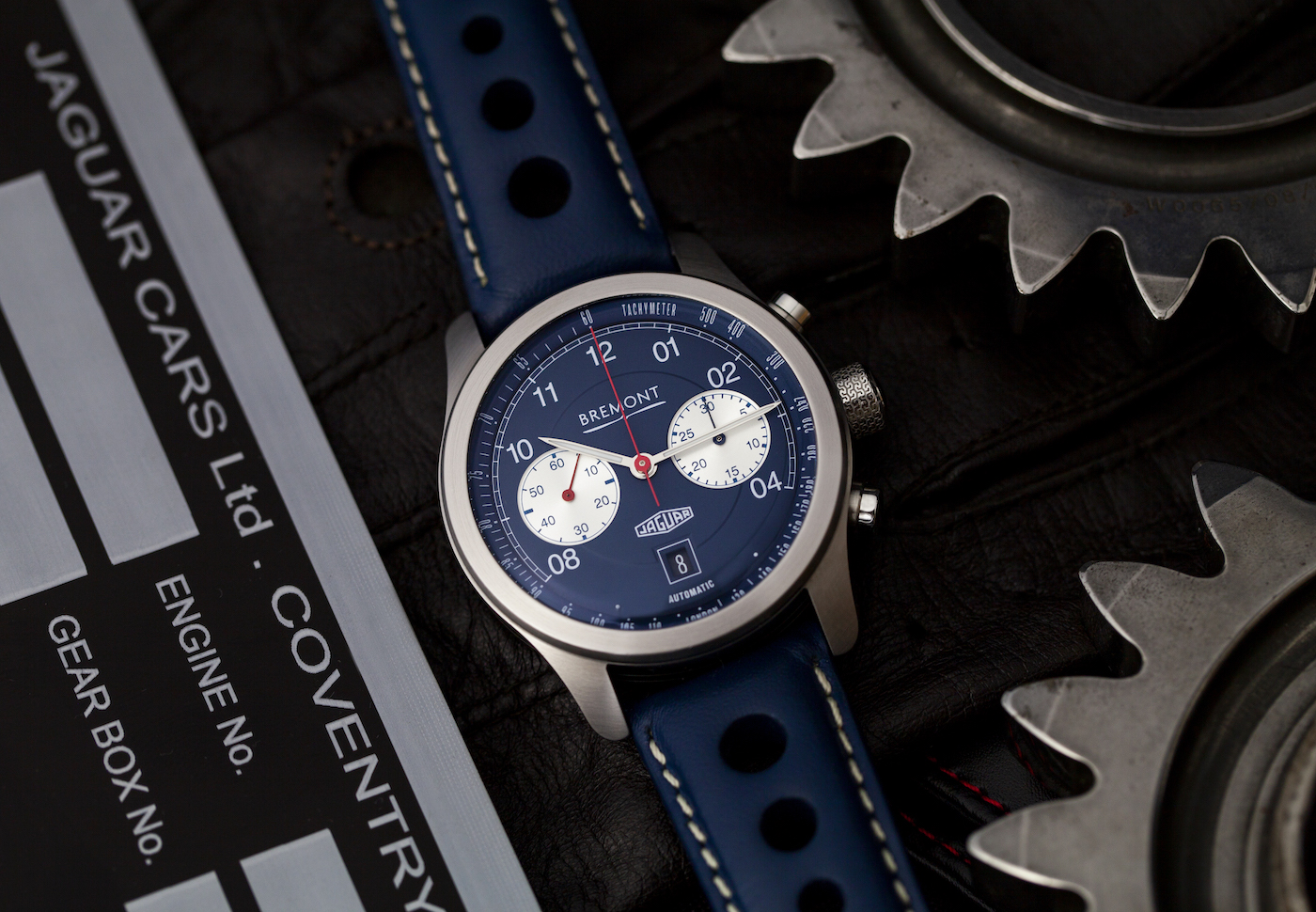 But still, this collection remained out of reach, given that the retail price of the MKI eclipsed $10,000. The MKII brought this handsome range in reach of many more Bremont fans, and now, thanks to the release of the Bremont Jaguar D-Type Chronograph watch, there is a blue option, too. 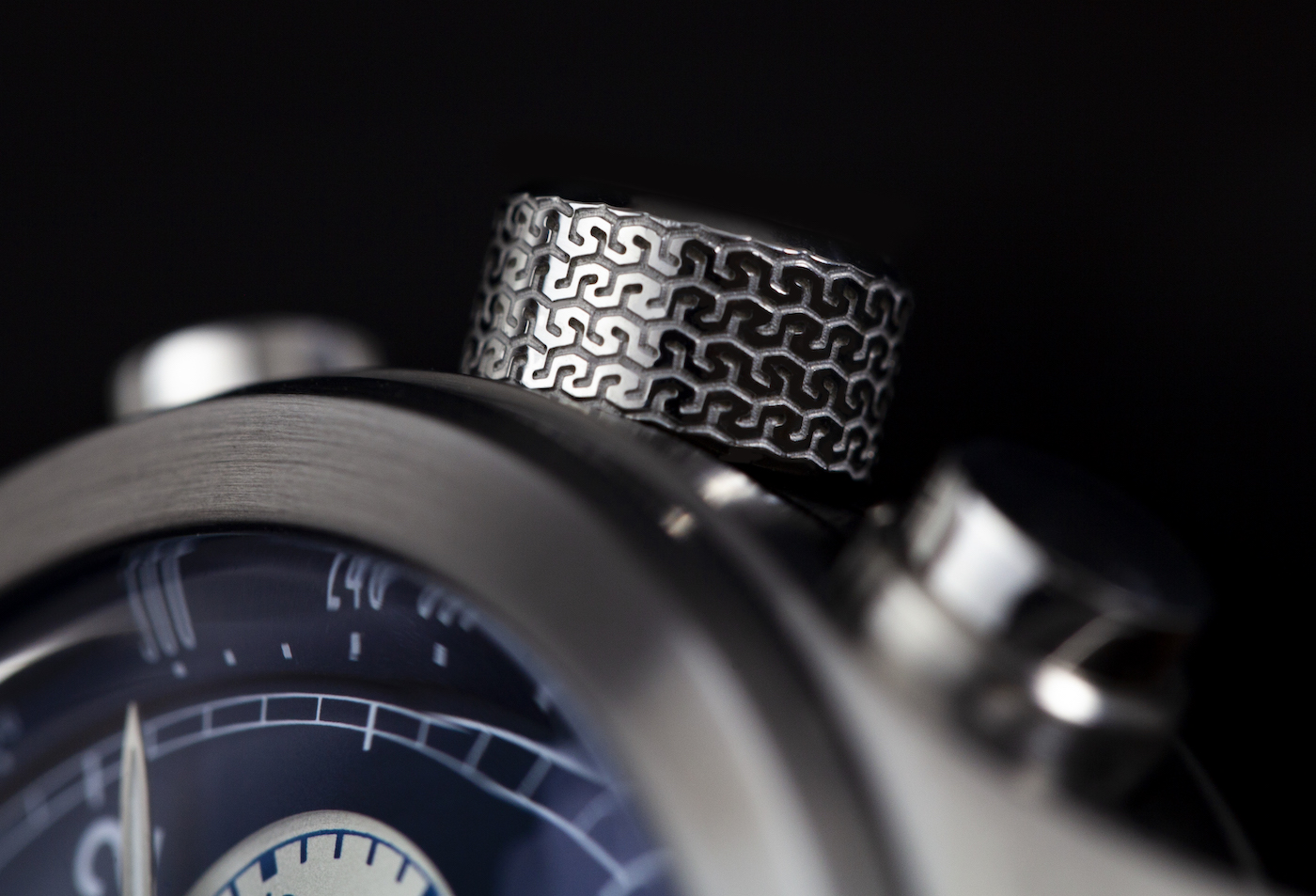 The color scheme makes this watch feel at home right away. It wasn’t immediately that I realized how its patent similarity to the classic TAG Heuer Monaco color scheme may have something to do with the instant comfort I felt with this watch. It very much felt as if I’d seen it before. While I still prefer the black-dialed MKII, personally, I appreciate the range expansion of what is probably my favorite Bremont line. Truthfully, I just can’t get enough of the neat tire-tread edging on the crown.

As mentioned, the Bremont Jaguar D-Type Chronograph is powered by what is, when stripped down to its bare bones, an ETA 7750. The operating speed is 28,800vph, the power reserve is 42 hours, and the two sub-dial registers show the going seconds (at 9 o’clock) and the chronograph minutes (at 3 o’clock). The chapter ring around the outside of the dial has a tachymeter, which is actually just the second time a Jaguar watch from Bremont has featured a scale of any kind (and it couldn’t really be a more appropriate one, from a stylistic rather than practical sense, at least). This new addition to the Bremont family will be limited to 300 pieces and have a retail price of $7,295. Learn more at bremont.com.