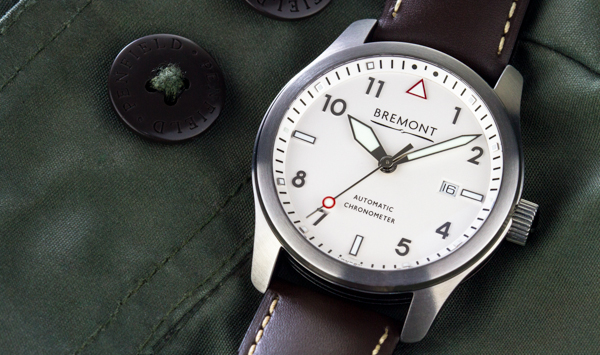 By now, it is of all likelihood that as an aBlogtoWatch reader, you are well acquainted with Bremont watches. This feisty English brand is the progeny of two brothers with a passion for aviation and a love of all things mechanical. Giles and Nick English launched Bremont a little over ten years ago and recently Bremont completed a move to a new headquarters based in Henley, England.

As with any watch brand, it is crucial to not only focus on their flagship designs, such as Bremont’s HMS Victory, but also on their “entry level” models. A brand’s most modestly priced model must often be their most concentrated design. When planning a more expensive model, there is a latitude or buffer that does not exist under the constraints of creating a laser-focused introduction to one’s brand. 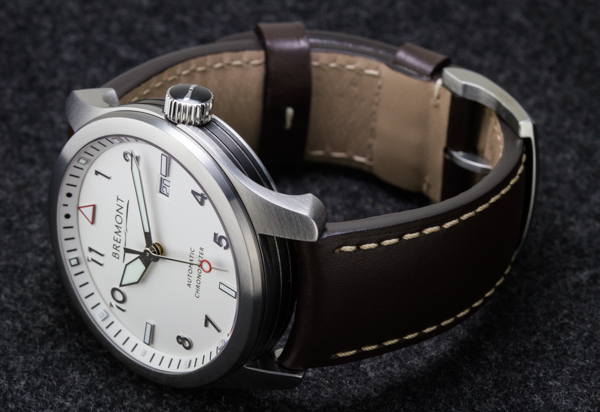 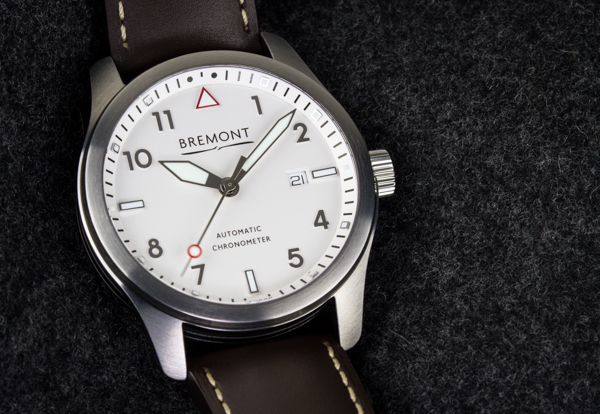 The Bremont Solo is that laser-focused introduction. Now available in two sizes, 37 and 43mm, the Solo can be had, as it was originally launched, with a black dial (reviewed on aBlogtoWatch here) or now with the beautiful off-white dial seen here. Incorporating many of their signature features, the Solo is Bremont’s handshake, a calling card for what Bremont considers essential in a watch, and nothing more. Reviewed here is the relatively new-to-the-market Bremont Solo white in 43mm. Distinct against the black-dialed model by not only coloring, this version, the reference SOLO/WH-SI has also been treated to inlaid markers, a matching chapter ring and an updated hand design.

The inlaid markers make for a more three dimensional dial view and the white dial retains some of the military feel of the original Solo while offering a distinct appeal. The finishing of the dial is excellent and easily viewed through the distortion and glare-free sapphire crystal. Bremont has their own anti-reflective treatment for their crystals which consists of nine layers of treatment on each side of the crystal which is then hardened for increased scratch resistance.

The end result is a very clear view of the dial, a hardness rating of 2000Hv and a massive reduction in ambient reflections. A serious crystal for a brand that is serious about the resilience and longevity of their watches. Below, you can see the comparative sizing between the 43mm and 37mm white Solo models. The 37mm model is not only distinct in its case size but also in its use of a stainless steel middle barrel and a metallic marker at 12 (no red coloring). Additionally, while the photo below makes it look as though the 37mm Solo is slightly thicker, I did confirm with a caliper that it is a few tenths of a millimeter thinner than the 43 mm version. 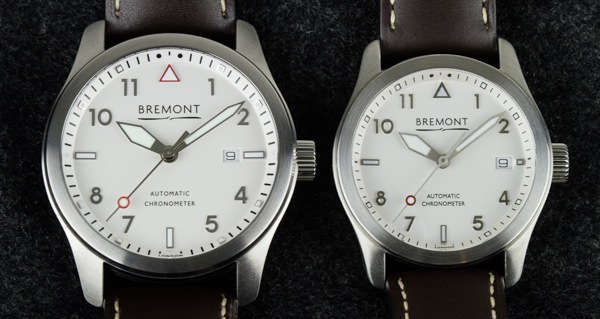 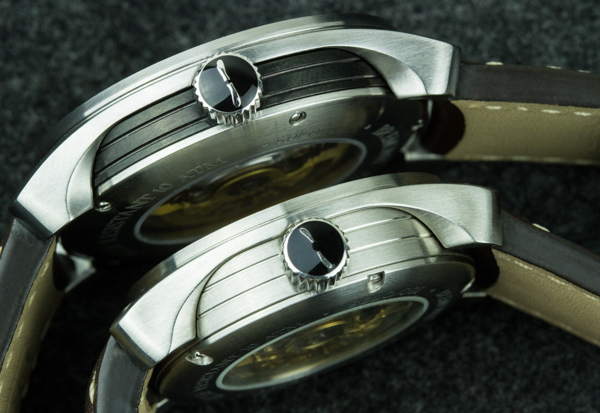 The Solo is encased in Bremont’s specialized Trip-Tick case which uses a three piece design incorporating the upper assembly, which houses the crystal and draws into the lugs, the center PVD-treated middle barrel, and the steel/sapphire display back which is affixed with five screws. The entire assembly has been treated to Bremont’s B-EBE2000 hardening process in which the steel is hardened with the use of carbon, heat and an electron treatment with the final result being a surface hardness of 2000Hv (some nine times harder than conventional stainless steel).

Having spent time with a series of Bremont models, I don’t believe this hardness treatment (in the crystal or the case) to be anything less than fantastic, and it is one of the defining features of Bremont’s entire lineup. 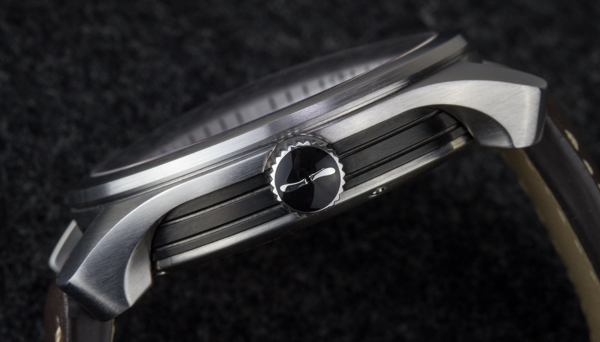 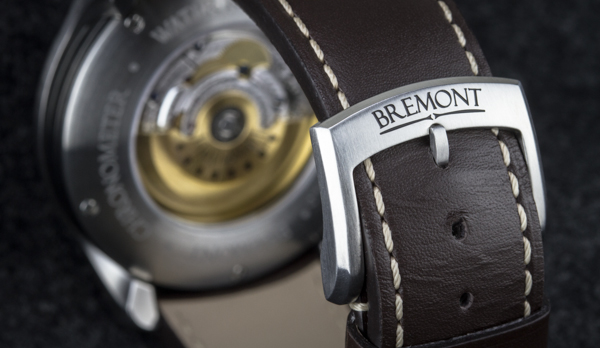 I like the idea of a sport watch that can stand up against the rigors of daily wrist duty and just as we have seen many brands start to employ ceramic in their watch designs, I believe that we will begin to see other brands develop similar hardness treatments for their sport watches. I think that manufacturers like Bremont, Sinn, and Damasko were simply ahead of the “hardness” curve.

In the interest of comparison, Bremont’s treatment boasts a hardness that exceeds both Sinn’s (Tegiment ~1200Hv) and Damasko’s (Ice ~710Hv). Does all of this matter to the end user? Maybe not at first, but after a long period of wear, wouldn’t you prefer a watch that still looks fresh and doesn’t need to be buffed and brushed back to a like-new finish? Sport watches have always sought to protect the movement so the watch could carry out its intended task and provide an accurate view of the time, a hardening of the exterior simply offers the next evolution, one that protects and preserves the case and crystal as much as possible. 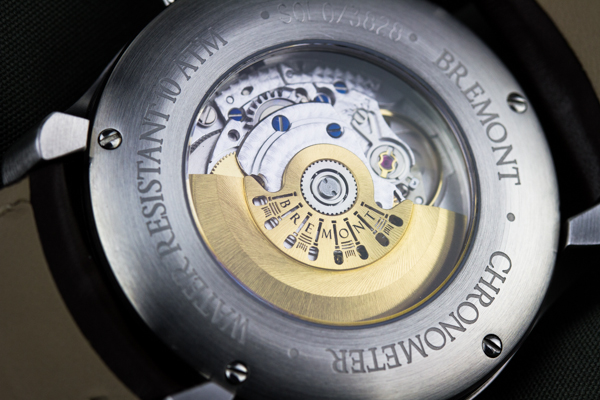 The white Solo is powered by the same BE-36AE found in the rest of the Solo range and much of Bremont’s other three-hander models. The BE-36AE is a modified ETA 2836 featuring a glucydur balance, anachron balance spring, Nivaflex mainspiring and a smart Bremont rotor to cap it off. Owners can expect a power reserve of 36 hours from this COSC-certified 25 jewel movement. Timekeeping on my example was excellent and, under daily wear, the Solo ran only a couple of seconds fast (as would be in-keeping with a COSC chronometer).

The movement is viewable via a sapphire display case back and is controlled via a screw-down crown at three on the case side. The crown is large enough to be easily grasped and is nicely finished with the Bremont logo in a glossy black cap that matches the black middle section of the case. The inclusion of a screw down crown is very nice as many pilot style watches like the Solo would be fitted with a passive crown. No doubt thanks to the screw down crown, the Solo boasts 100m (330 ft) worth of water resistance. 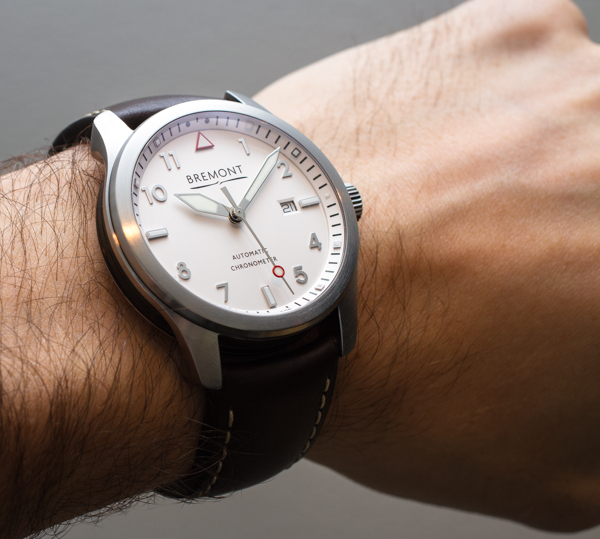 On wrist, the Solo’s 43mm case size is at first dominating due to its fairly large dial and slim unmarked bezel. Thanks to the short curved lugs and 13.5mm thickness, the Solo wears close to the wrist and will fit under all but the tightest of cuffs. The 49.5mm lug-to-lug length would lead me to suggest those with smaller wrists try both the 43mm version and the 37mm version on for size, you may prefer the 37, which can also be had with rose gold accents. 43mm is essentially Bremont’s signature size and I had no problems finding the Solo a comfy spot on my 7.5 inch wrist.

On the brown leather strap seen in the photos, the Solo tips the scale at a very wrist friendly 99g, which is good for a modern sized watch with steel construction. Bremont’s straps can be had with either a deployment clasp or a tang style buckle. The tang buckle is one of the best available as it features a shape that offers a relief for the strap, allowing the buckle to lay very close the strap and minimize the likelihood of it catching or snagging on clothing or adding bulk. A small consideration for sure, but one that makes wearing a sport watch on a thick leather strap easier than you might expect. 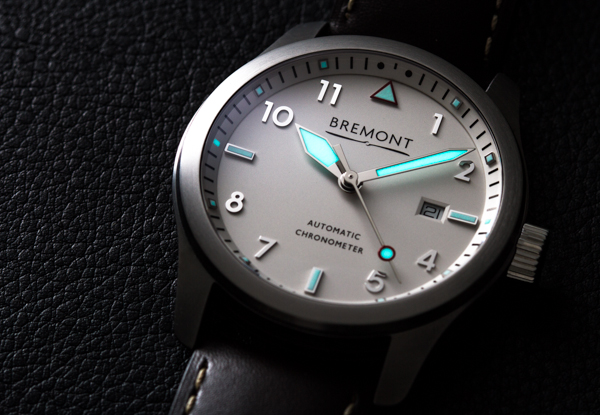 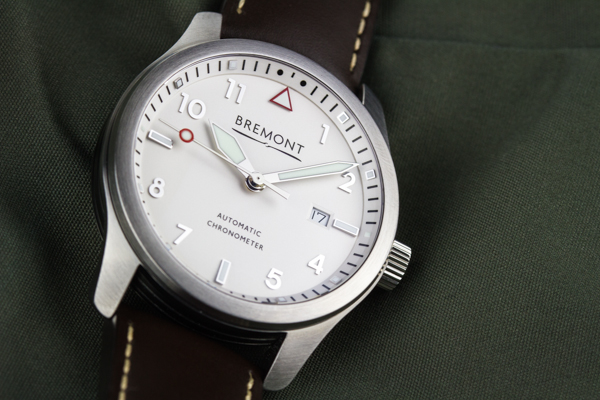 The SOLO/WH-SI has been fitted with a series of luminous elements including chapter markings, markers at 12, 3, 6, and 9, as well as large aviator-style hands. The hands do a very good job and glow a lasting cool blue while the smaller markers fade much faster than the hands. I had no trouble checking the time in movie theaters and the hands and markers all have a bright chrome-like surround so you can easily turn the face towards any available light source to see the position of the hands. The twelve o’clock marker and the seconds hand have a dark red accent that works well with the otherwise monochromatic dial design. The date window blends in next to the three o’clock marker and is a very close match to the white of the dial.

On that note, the dial is not pure white like a Rolex Explorer II, nor is it as creamy as the color shown on Bremont’s website. The dial is most definitely white but it exhibits a warmer silver tone that can be seen in daylight or the light of an incandescent bulb. I love the type of white they chose for the Solo as it has more depth than a crisp flat white but almost none of the cream or dull pinkish tones seen in other off-white dials. Bravo Bremont. 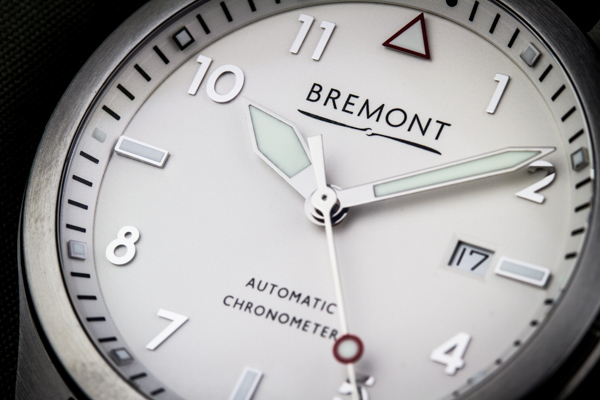 Bremont makes watches that are relatively devoid of pretension. As a young brand, they have almost no poser credentials outside of WatchNerd circles and, when compared against their competition, they boast an expanded feature set that should put them in consideration for time on your wrist and in your collection. The Solo carries a list price of $4100 USD, which is still a fair chunk of cash regardless of its position as Bremont’s most modestly priced option.

The Solo is, in many ways, Bremont concentrated. Yes, on more expensive models you get expanded features like their Roto-click bezel, world timing complications, as well as anti-shock and anti-magnetic systems, but the Solo provides classic aviator styling mixed with Bremont’s hardness treatment, an excellent sapphire crystal, chronometer certification and Bremont’s lovely case design. There’s little use in mincing words, I love this Solo for its bright white dial, distinctive case, and well sorted solution for those wanting a tough watch with a clean and legible time display that will easily stand up to daily wrist duty. bremont.com 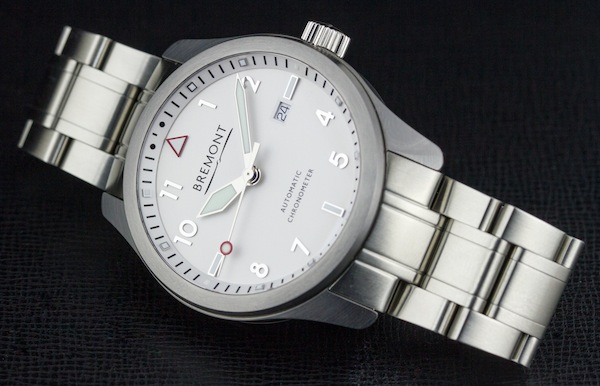 BRACELET UPDATE: After a few months with the Solo, I was able to source the matching bracelet from Bremont. The steel bracelet is simple but nicely finished and very solid, with a folding push-button clasp and fitted end links. The bracelet tapers from 22mm at the end links to 20mm at the clasp, giving it a less chunky look on-wrist. Sizing the bracelet is done via screwed links and the bracelet includes two half links and two micro-adjustment positions in the clasp. Fitted to the Solo, the bracelet has a big effect on the overall look and feel of the watch, giving it a more modern vibe and a considerable increase in heft (now 176g, sized).

The Solo bracelet carries a retail price of 476 GBP (~$735 USD) which, while certainly a fair bit to spend on a bracelet,  is well within the normal range for a luxury sport watch bracelet. If you want the bracelet, our advice is to get it when you buy your Bremont as the bracelet is a bit cheaper when sold alongside the watch. While the Solo looks great on literally every strap I’ve tried, the bracelet offers an attractive and versatile alternative that really completes the Bremont package. See the gallery below for additional photos.