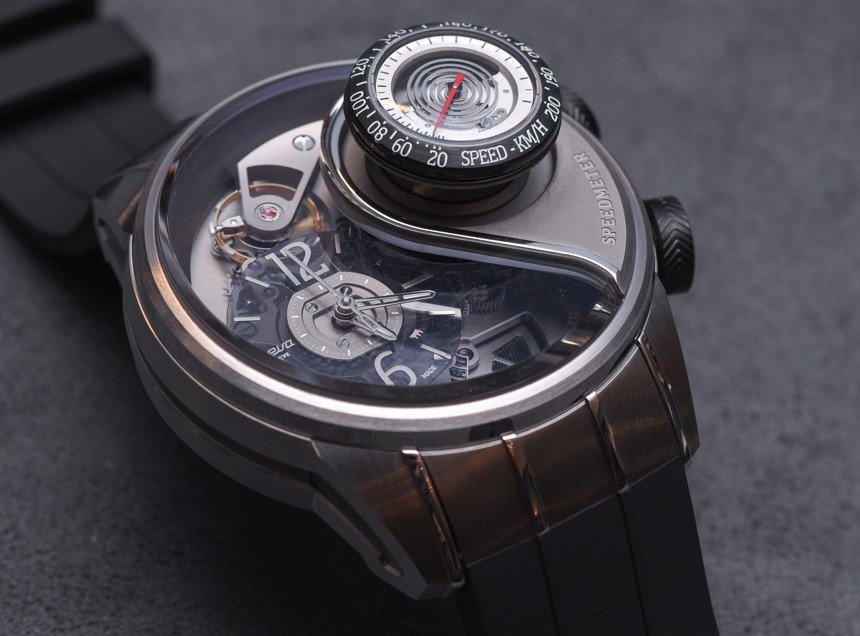 Today Breva has debuted their latest model, the Breva Genie 03 Speedmeter, which carries on the tradition of merging a mechanical movement with a highly unusual – and also fully mechanical – complication that we would not expect to see in a wristwatch. Following the barometer and altimeter complications of previous pieces, the Genie 03 packs a so-called Speedmeter device that allows the wearer to measure speed – or rather: air speed – instantaneously. Coming up now is a hands-on look at what is new in the latest – and so far cheapest – in the Genie series. 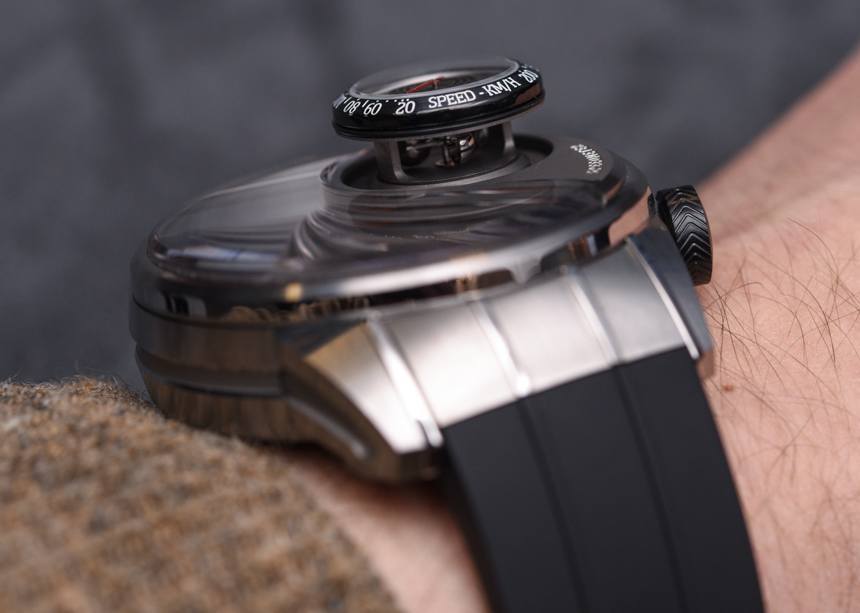 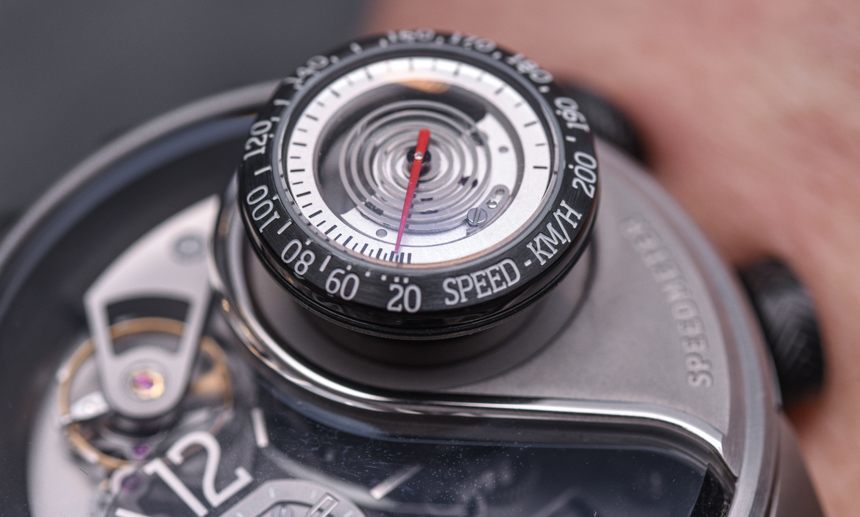 Cutting straight to the chase, the Genie 03 Speedmeter’s centerpiece is of course the speed measuring device itself. This patented – and again, entirely mechanical – device takes up most of the right hand side of the dial, dividing it into two in a yin and yang reminiscent shape. On top of it is a dial that is scaled either from 20 to 200 kilometers per hour or from 10 to 125 miles per hour, with a red hand pointing to the measured speed at any given moment. Here’s how it works. 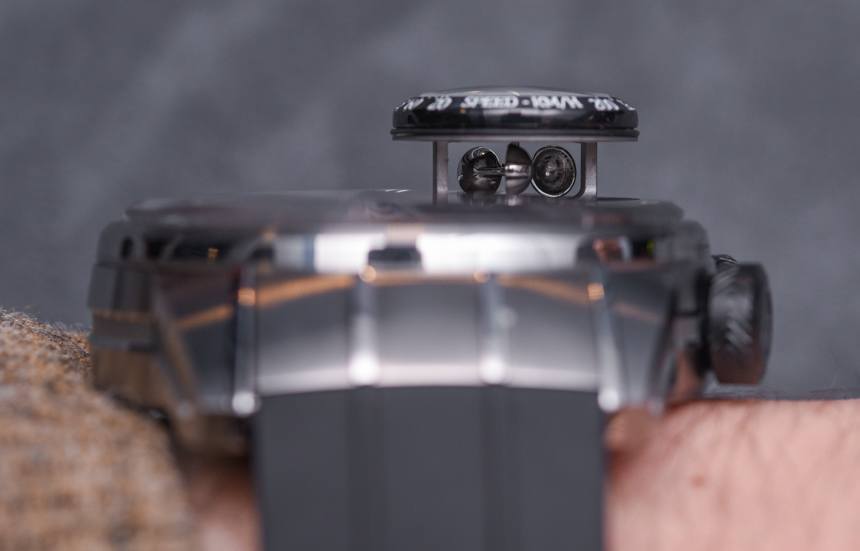 Normally, the device is hidden (recessed) inside the case keeping the mechanism safe. Once the screw-down crown at the 2 o’clock position has been pressed, the device pops up and is raised by about half an inch above the plane of the dial. As seen on the image above, this reveals the “Robinson cups”, a set of three hemispheres which are fixed to an axis. The cups are designed in a way that the wind can catch and drive them, spinning the axis they are fixed to. We did give this a try, as Breva had a compressed air “gun” to illustrate how the cups are spun by the air moving around them. 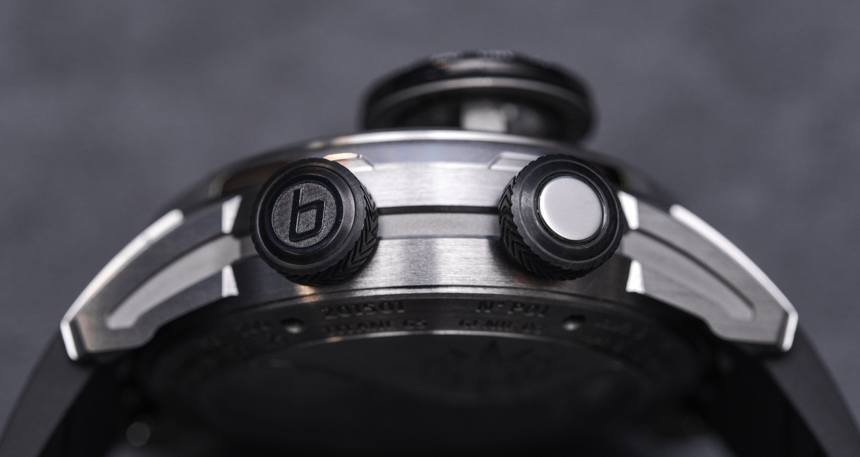 As you will see – and hear – in the video, it takes considerable air flow to move the cups and hence force the hand around the scale. As the wind catches into the cups, they start spinning up to a speed of 20 kilometers an hour when they are disengaged. The device keeps on measuring wind speed, but the cups are stopped from spinning so as to protect the mechanism. What happens instead, is that they start working against a spring’s resistance, allowing the device to keep on measuring between 50 and 200 kph without the cups actually spinning around.

It is here where we should note the differences between a tachymeter and the speedmeter. A tachymeter is also noted as a “device” that is found exclusively on chronograph watches. The tachymeter basically is a scale on the periphery of the dial of the watch: the chronograph has to be started at the time when the driver drives by a distant reference point (i.e. a milestone), start the chronograph and stop it at the next point. The chronograph’s second hand will point to the speed of travel on the tachymeter scale. By contrast, the Genie 03 works in a more direct and instantaneous way as the cups are spun by the air and given the strength of the air flow, the sub-dial at 2 will indicate the calculated speed immediately. 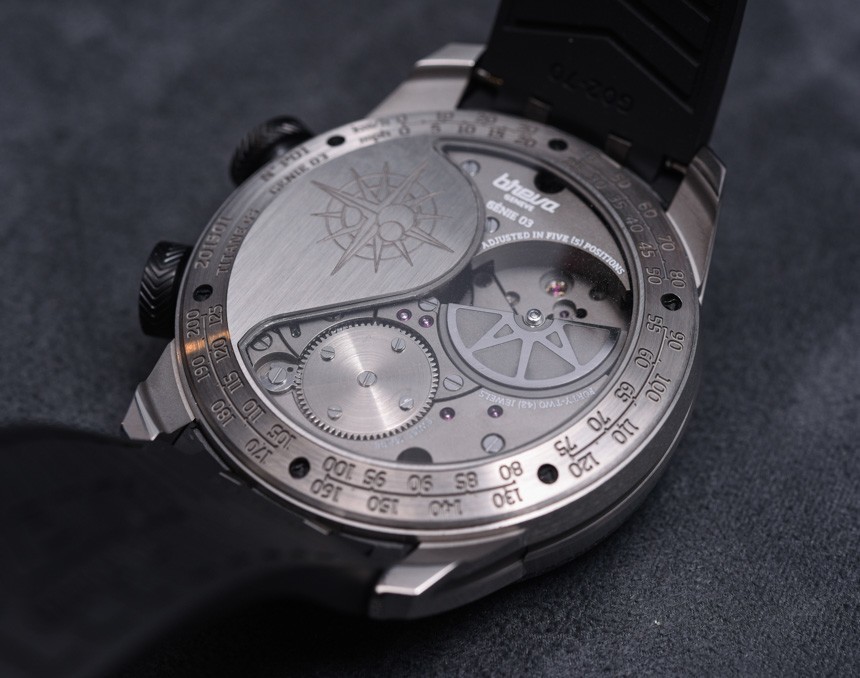 All this Speedmeter mechanism is built around – or rather into – a new automatic movement. The new movement, caliber BRE03.001, is Breva’s first in-house designed and manufactured movement, as the brand has moved most of its production in-house. A small team of designers and watchmakers are working on the components and the assembly, allowing the brand to produce its first proprietary movement. 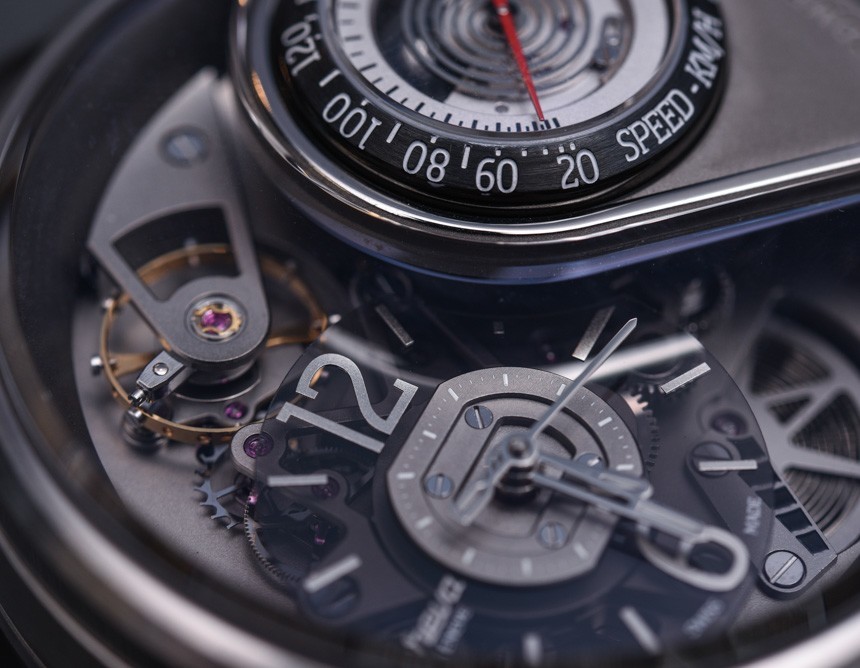 The new caliber and its 230 components have been designed to be installed upside down, exposing the balance wheel, escape wheel and also the skeletonized mainspring barrel at the six o’clock. The time-only movement displays the hours, minutes and running seconds on the saphire sub-dial at the 7 o’clock position. While the Breva Genie 01 (hands-on here) featured a barometer and a weather forecast display on its dial, and the Breva Genie 02 (hands-on here) a similar looking mechanism and an altimeter indication, the Genie 03 has a comparably cleaner looking dial.

It therefore made sense to have some of the movement’s components exposed on the front of the watch, animating it with a free-sprung balance wheel running at 4 Hz and its escapement. While there are no lavishly decorated bridges or gear trains running across the dial, the front still looks complicated in a way that implies there is something hidden inside – which, with the Speedmeter, is literally the case here. 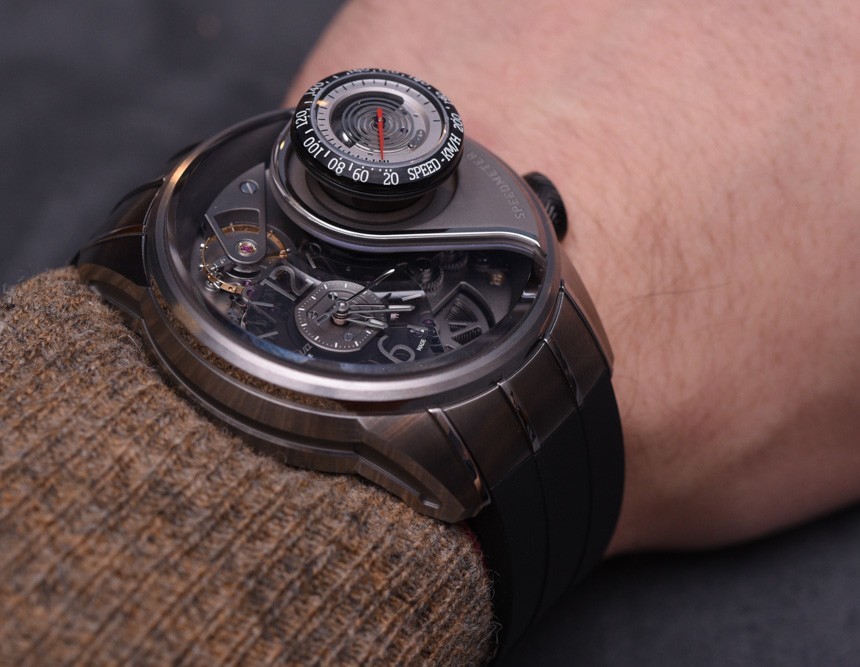 The Genie 03 comes in a 44.70 by 17.50 millimeter titanium case (including the anemometer in its closed position). The watch feel surprisingly light on the wrist, despite the fact that one would expect it to weigh considerably more with such a complex mechanism taking up a considerable part of it. The Speedmeter device however, with its 23 parts, turns out to be very light and relatively thin – in its retracted position – making for a watch that looks and wears very comfortably despite its size and looks.

The real life usability of Breva’s novelties has always been at least questionable, but then again, that hardly is the point here. The emphasis is much more on what is possible in watchmaking and micro-mechanics – electronic devices have been providing a more accurate alternative to most of their mechanical counterparts since decades, but that – fortunately – has not stopped engineers from creating machines which appear to be trying to realize what most would have considered to be impossible. 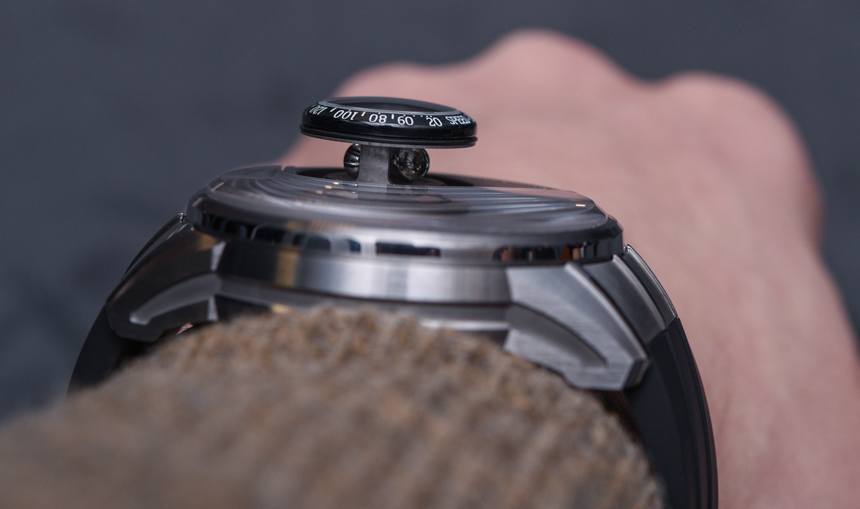 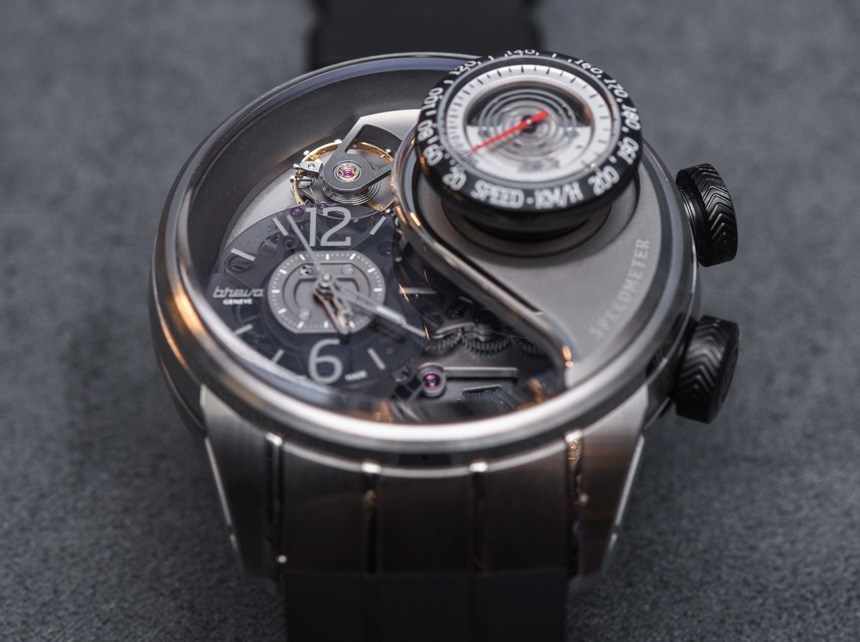 The Breva Genie 03 Speedmeter brings a new and impressive mechanism to the world of watches, adding another function and complication to the list of what a wrist watch can be made capable of. Such engineering feats do come at a price though, as the Genie 03 Speedmeter in titanium is priced at 48,800 Swiss Francs or about $56,800 – although that still is $120,000 less than the gold Genie 1 and about $80,000 less than the titanium Genie 2, despite the fact that it packs a comparably impressive and unusual mechanism. breva-watch.com