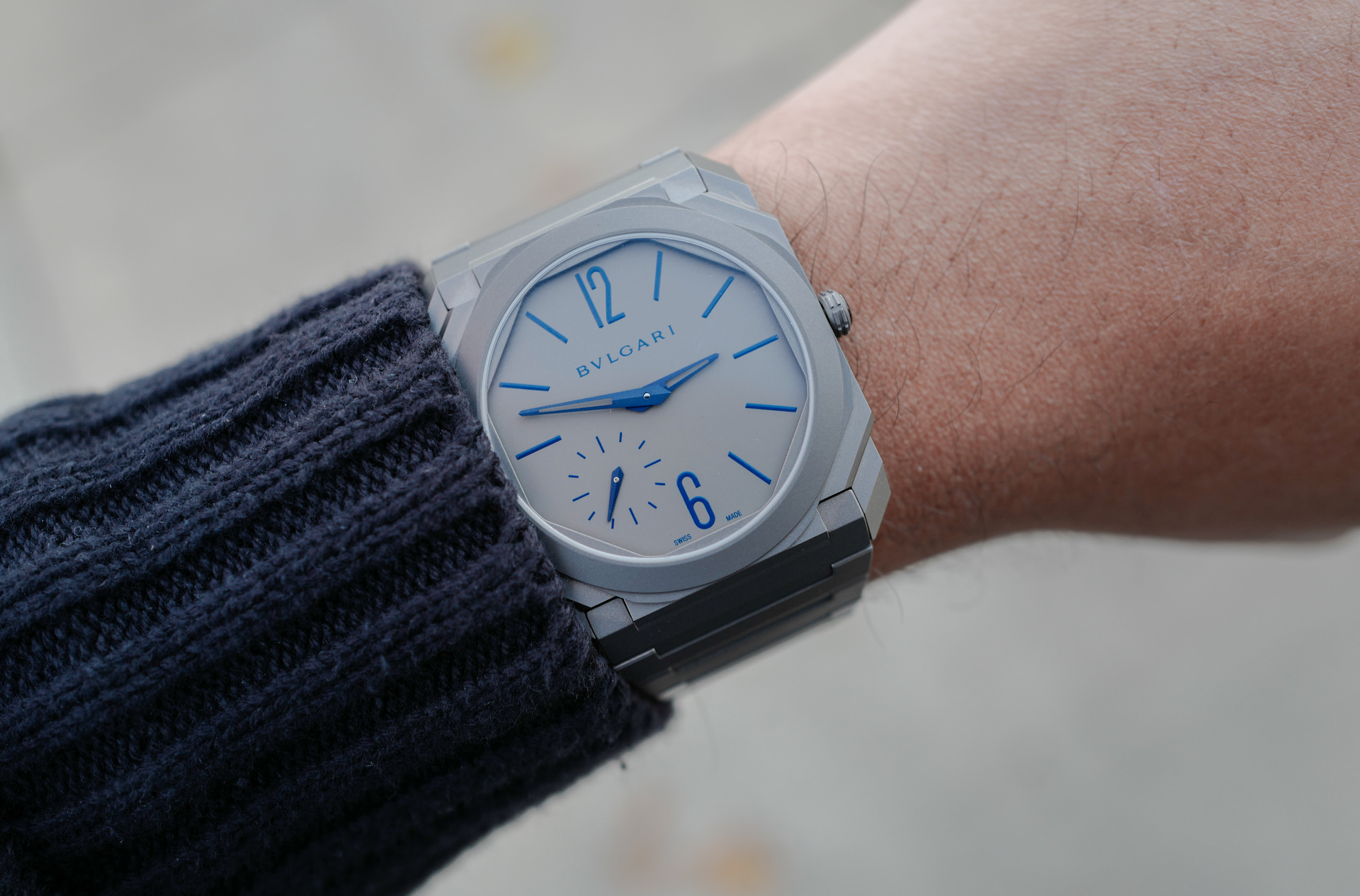 I enjoy doing watch reviews only after some time has passed since a watch was released. Once the hype has faded and the success, or lack thereof, is common knowledge, I can think most clearly about a watch. So, just as I reviewed the Hermes Slim d’Hermes three years after its initial debut, I chose to spend a few weeks with the Bulgari Octo Finissimo Automatic watch two years after its release. This specific version is one I was infatuated with when it was released, even though it’s a limited edition of only 200 pieces. That said, the differences between the non-limited-edition model and this one are quite minor — really, just cosmetic. 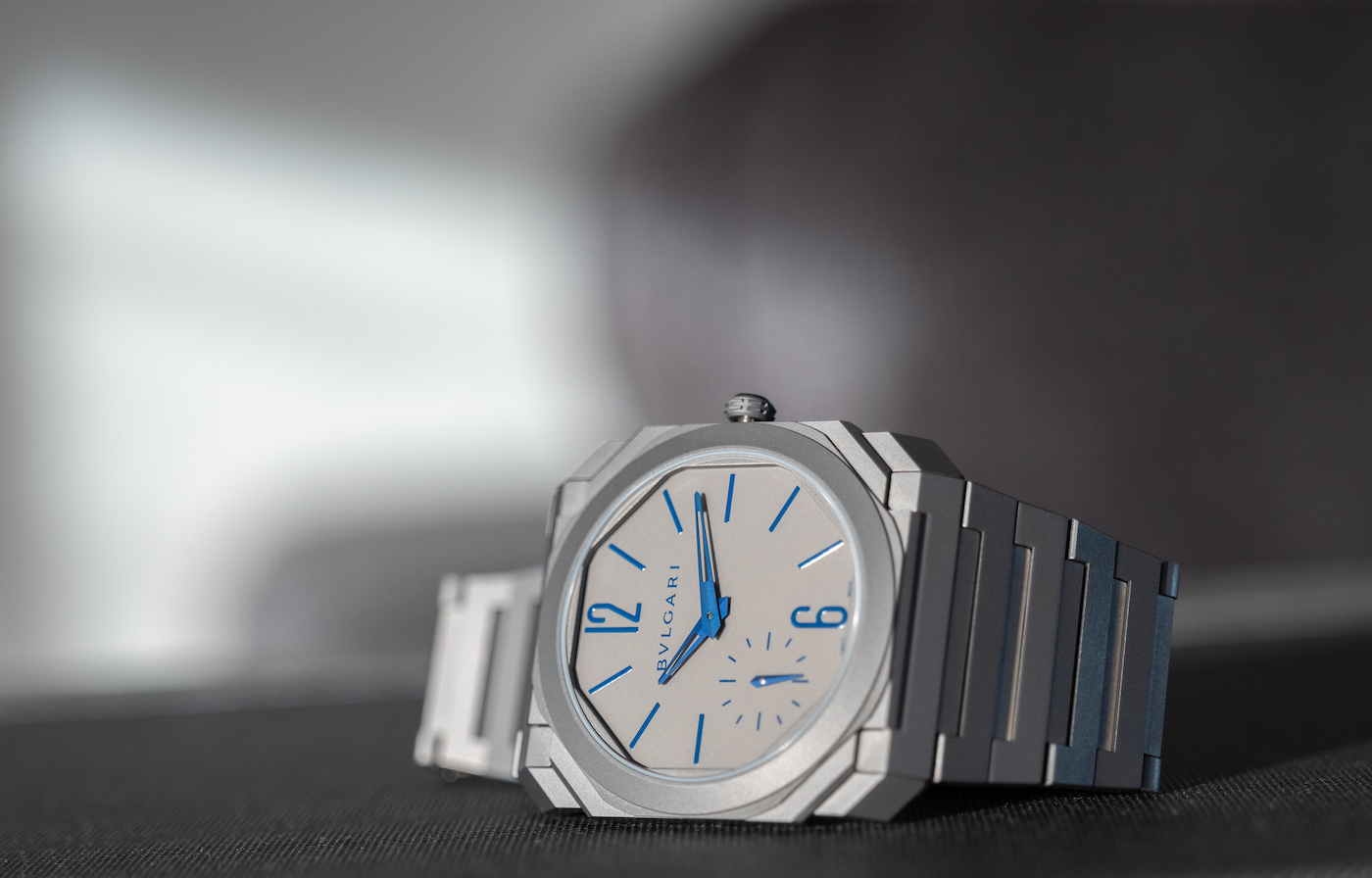 When it was released in 2017, we noted how refreshing the Bulgari Octo Finissimo Automatic was, due to the fact that it was a new watch that was actually… new. Rather than another iteration or “heritage” rehash, the Octo Finissimo takes Gerald Genta’s Octo design and makes it into a sleek, dressy sports watch that takes the fight to the Royal Oak and Nautilus. This limited-edition model done in a titanium case with blued hands has been the standout model Bulgari has released to date, and though it’s likely a futile wish at this point, I would love to see more than 200 produced. And, yeah, they’re all spoken for. 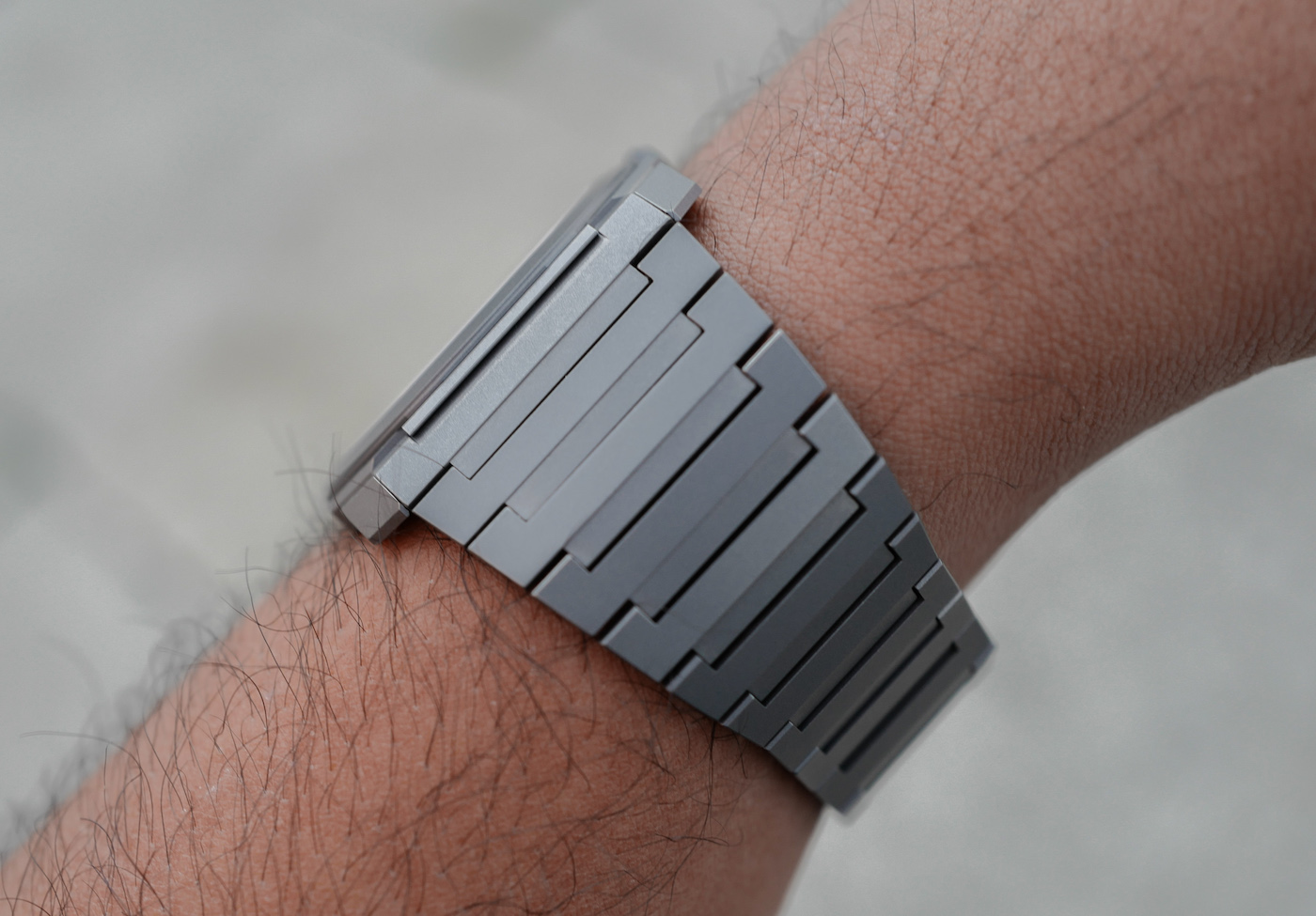 It seems like there was a period of time where beating the record for the slimmest watch was a pastime for the watch industry. The Octo Finissimo Automatic held the record for the slimmest automatic watch for some time, but I believe Piaget nabbed that crown from them. To be honest, though, the 5.15mm thickness of this case is about as thin as I’d like to reasonably wear. Adding to the slimness is the fact that the case and bracelet are done in titanium, so the whole thing is super lightweight. 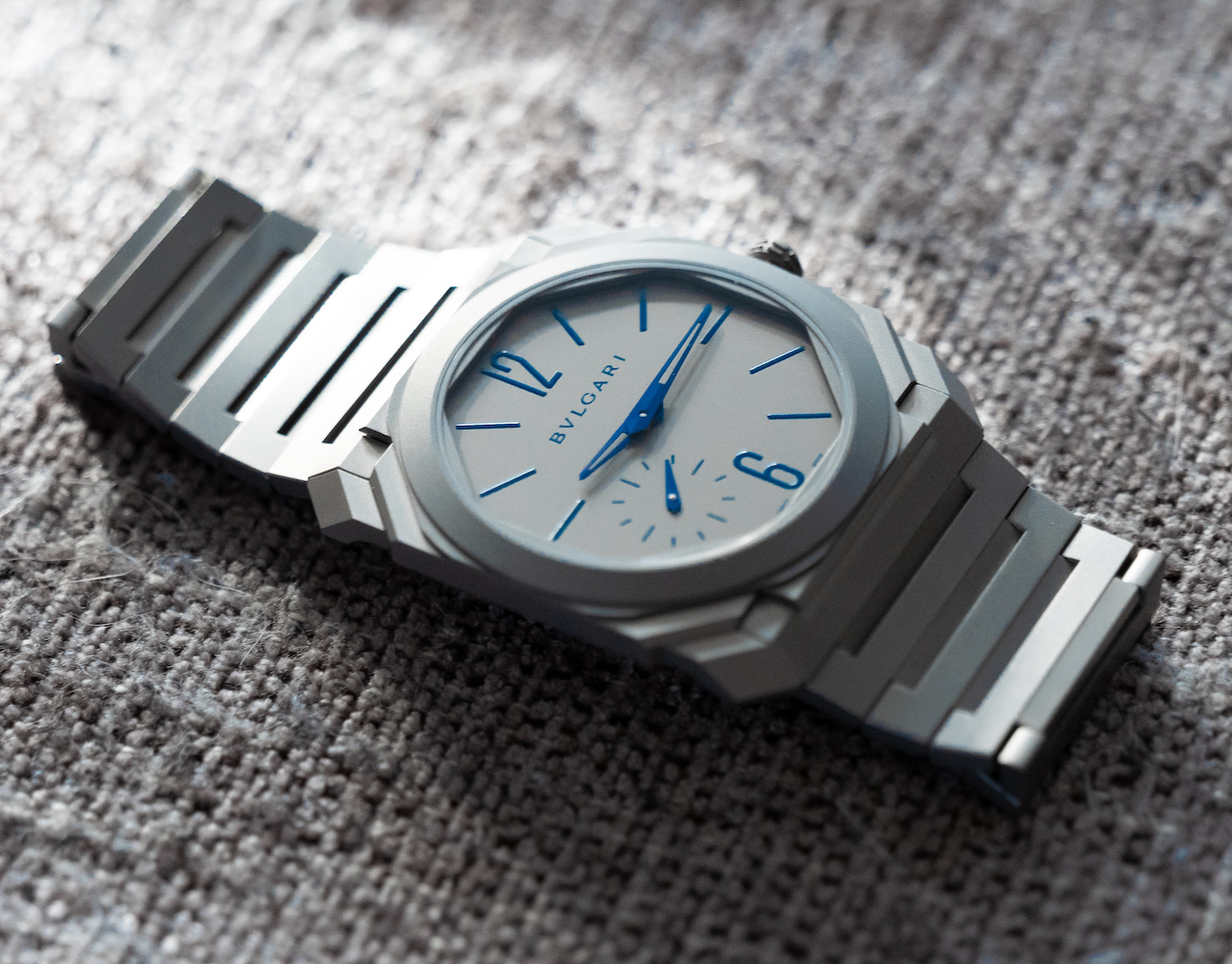 However, this isn’t to say that the Octo Finissimo is delicate, by any means. In fact, the slimness can be a bit stark and drastic if you’re used to watches even in the 12mm-thick range. This is also largely due to the slimness of the bracelet, as well. That said, one of my initial worries was that a watch this expensive (and on loan from Bulgari, no less) would cause me to be too anxious about damaging it to even wear it. The matte-finished titanium and the angular, confident design of the watch immediately put me at ease. The material and finish choices were almost made to say “wear me, don’t worry.” And so, I did. A lot. Report after three weeks of wearing it? Not a scratch. 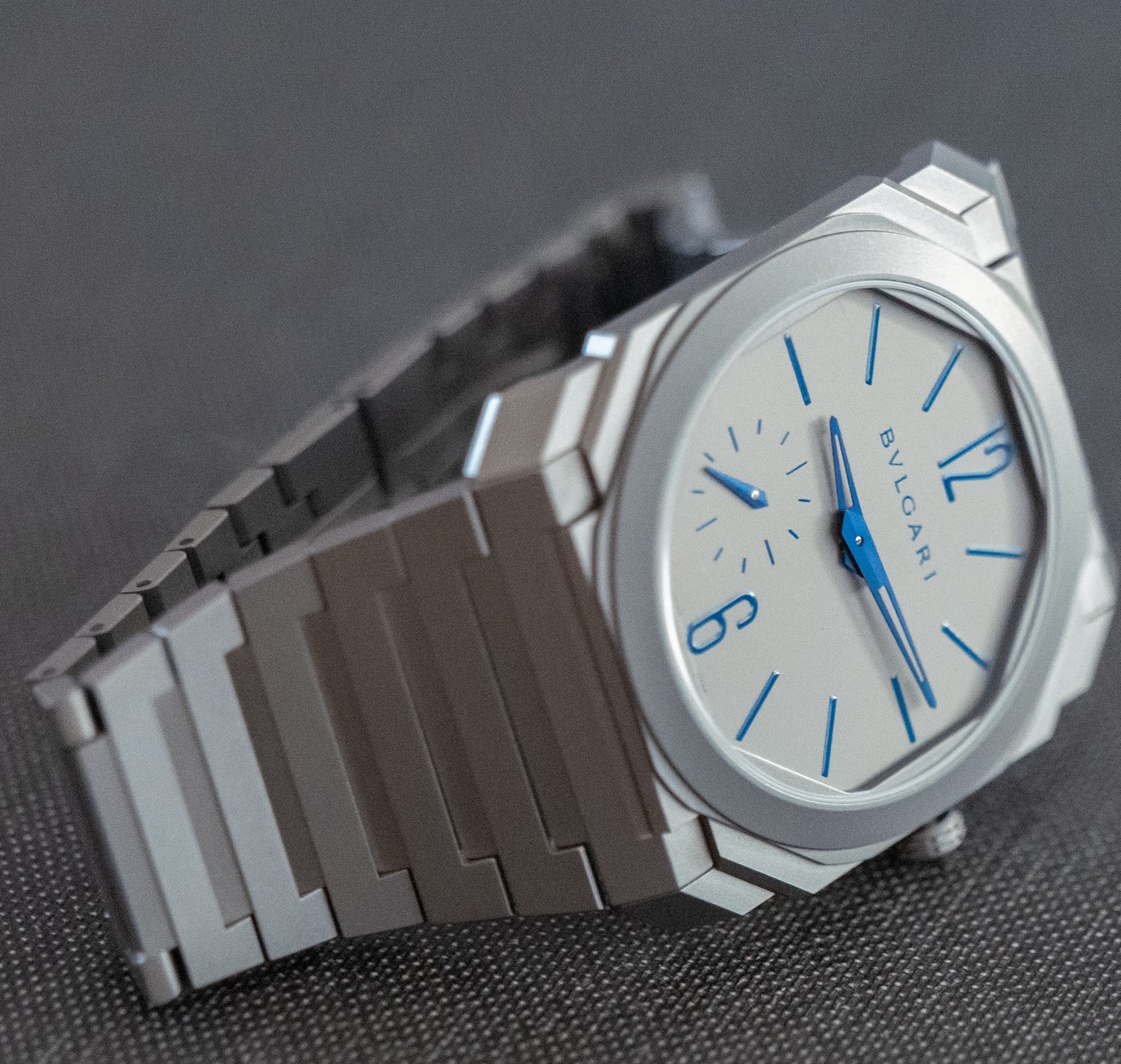 The Octo Finissimo case is a stark and contrasting design that came from the mind of the great Gerald Genta, first shown in the Octo watch line. The square case is stepped and angles sharply at the lugs and frames the round bezel which then has an octagonal shape on the inner side. It’s all a lot but it just works, and it’s like a piece of architecture on the wrist. At once familiar but actually unique. I know some people find the case shape to just be odd, and divisiveness is always part of the equation when you consider anything with such a strong sense of design identity. Just be warned: you will get a lot of questions and just general comments from people. In fact, other than watches from Urwerk or De Bethune, I’ve never gotten as many comments on a single watch. 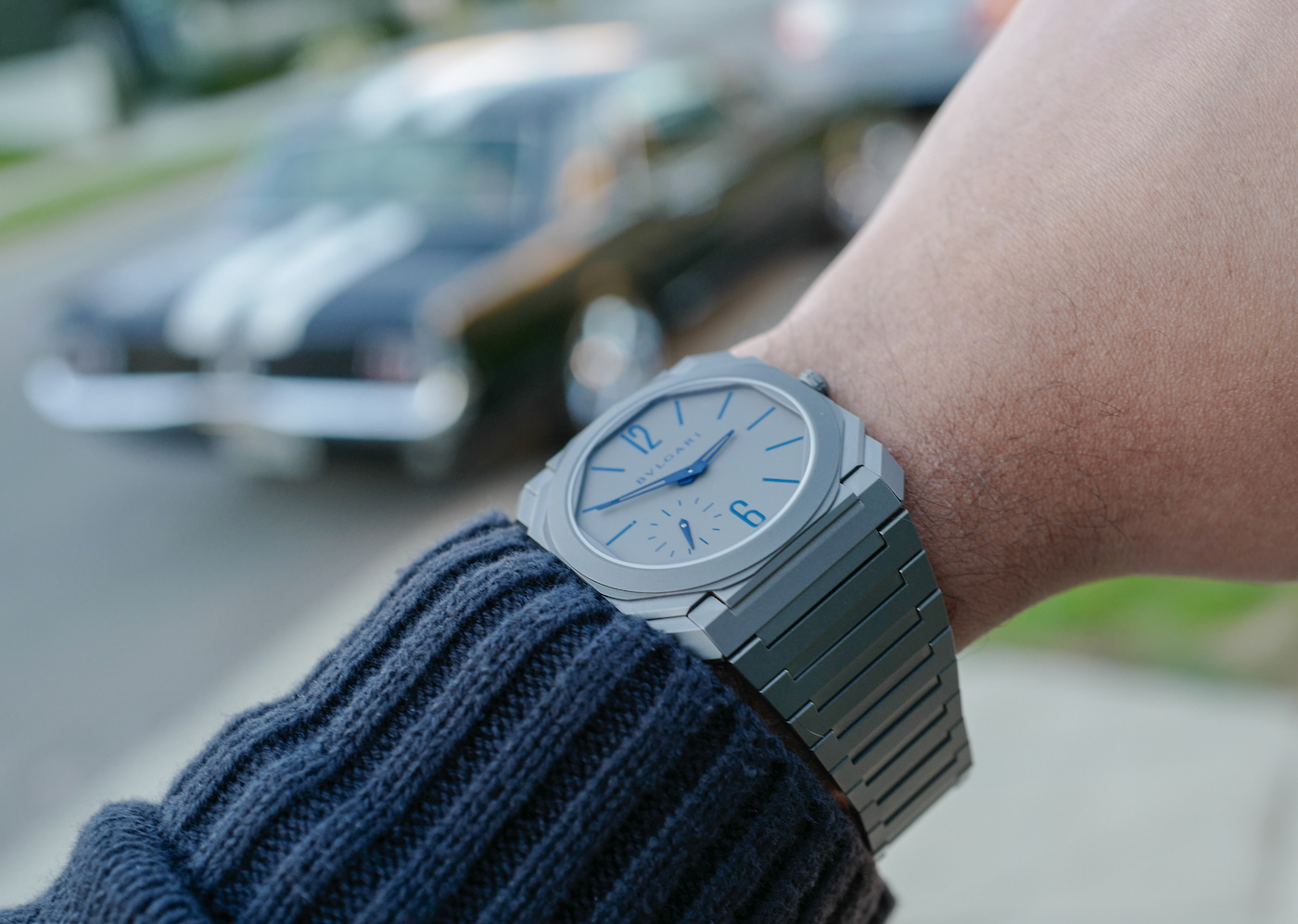 I know designers at Bulgari say that the Octo Finissimo design is inspired by the Basilica of Maxentius in Rome which dates back to 312 AD. These Roman basilicas typically had large rectangular bases split by arched columns and characterized by a large central area known as the nave. It’s not easy to see the connection in photos since so much of it isn’t standing anymore. However, this reconstructed cutaway view of the structure will certainly give you an idea of how the design of the Octo Finissimo was inspired by its architecture. 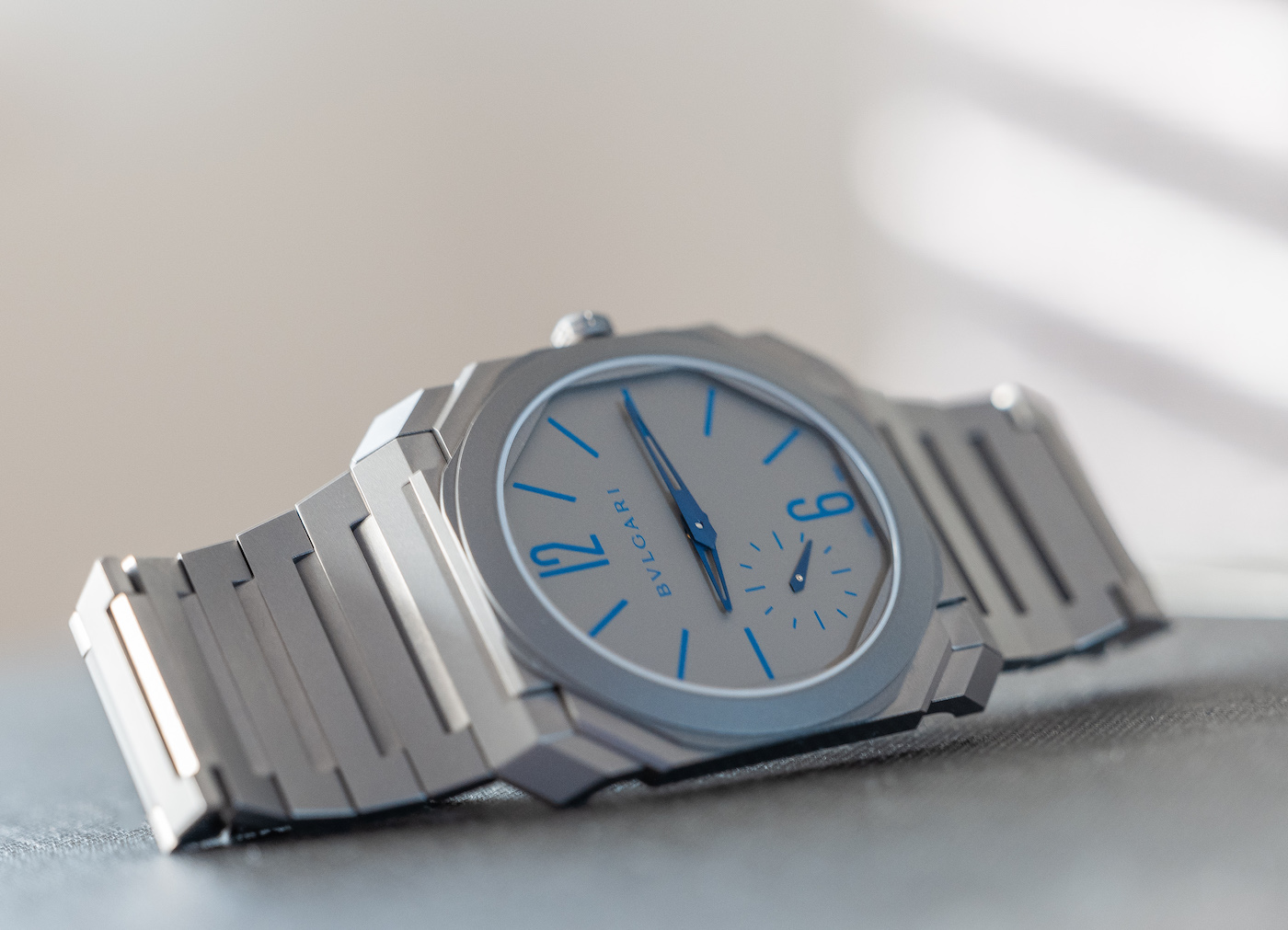 As for size, the Octo Finissimo case measures 40mm-wide and just 5.15mm-thick. It does wear larger than its 40mm would suggest. In terms of thinness, I believe the Piaget Altiplano Ultimate 910P holds the record for the thinnest automatic watch at 4.3mm-thick but at this level, it’s really just a matter of bragging rights for the brands, rather than any real noticeable experience for the wearer. As I said, I really wouldn’t want the Octo Finissimo to be much thinner than it is because the idea of wearing a Pringle-thin watch isn’t wholly appealing. After all, I want a watch, not a wearable tattoo. 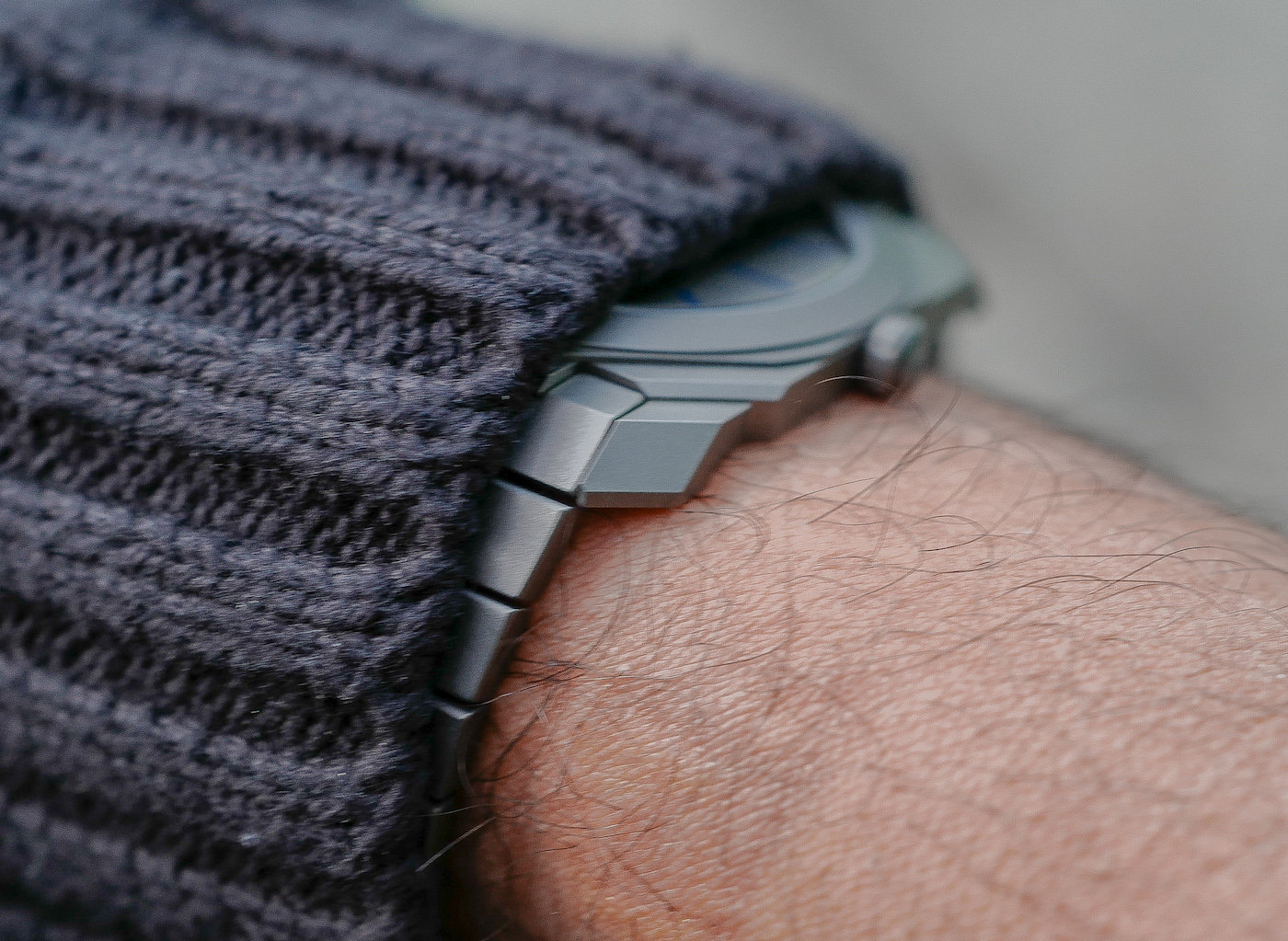 The exhibition caseback of the dial is done in sapphire crystal, while turning the watch over to the side shows the ceramic bit used on the crown. Another final note about the case: this watch is water resistant to 30 meters. You can wear it in the rain (or shower if you’re one of those people), but I wouldn’t take it further than that. 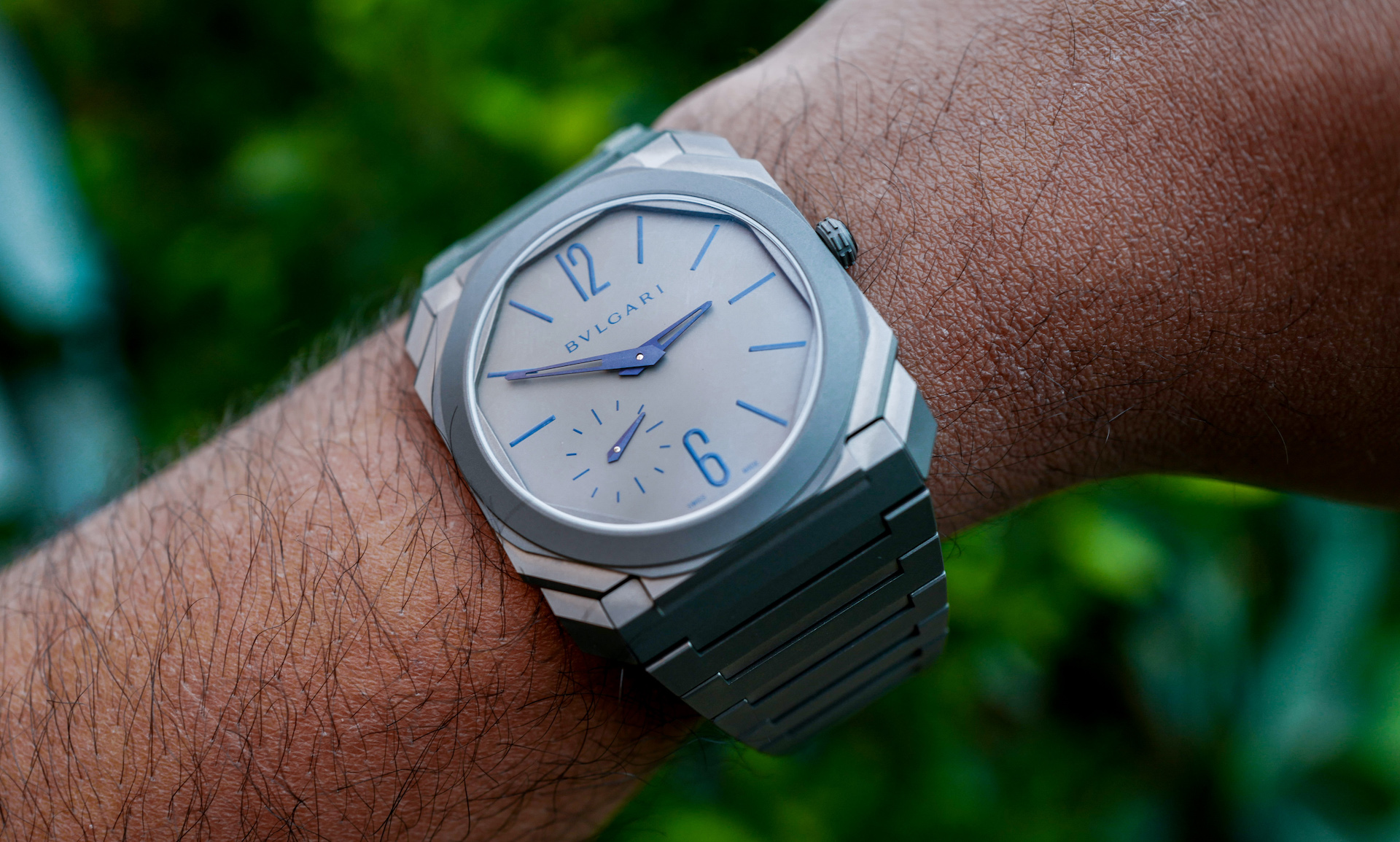 This specific limited-edition Octo Finissimo has blue hands and indices, while the standard models have these done in black PVD. The time-only watch dial is kept minimal with hour indices broken up by Arabic numerals for 12 and 6 o’clock and a seconds sub-dial at 7 o’clock. Highly legible on the matte dial, the hands continue the angular, architectural design language of the Octo Finissimo. One thing I want to mention is that the use of blue over black isn’t the biggest difference in the world, but I did always (admittedly vaguely) wish the standard Octo FInissimo dial had some more pop to it. The use of blue nailed it. 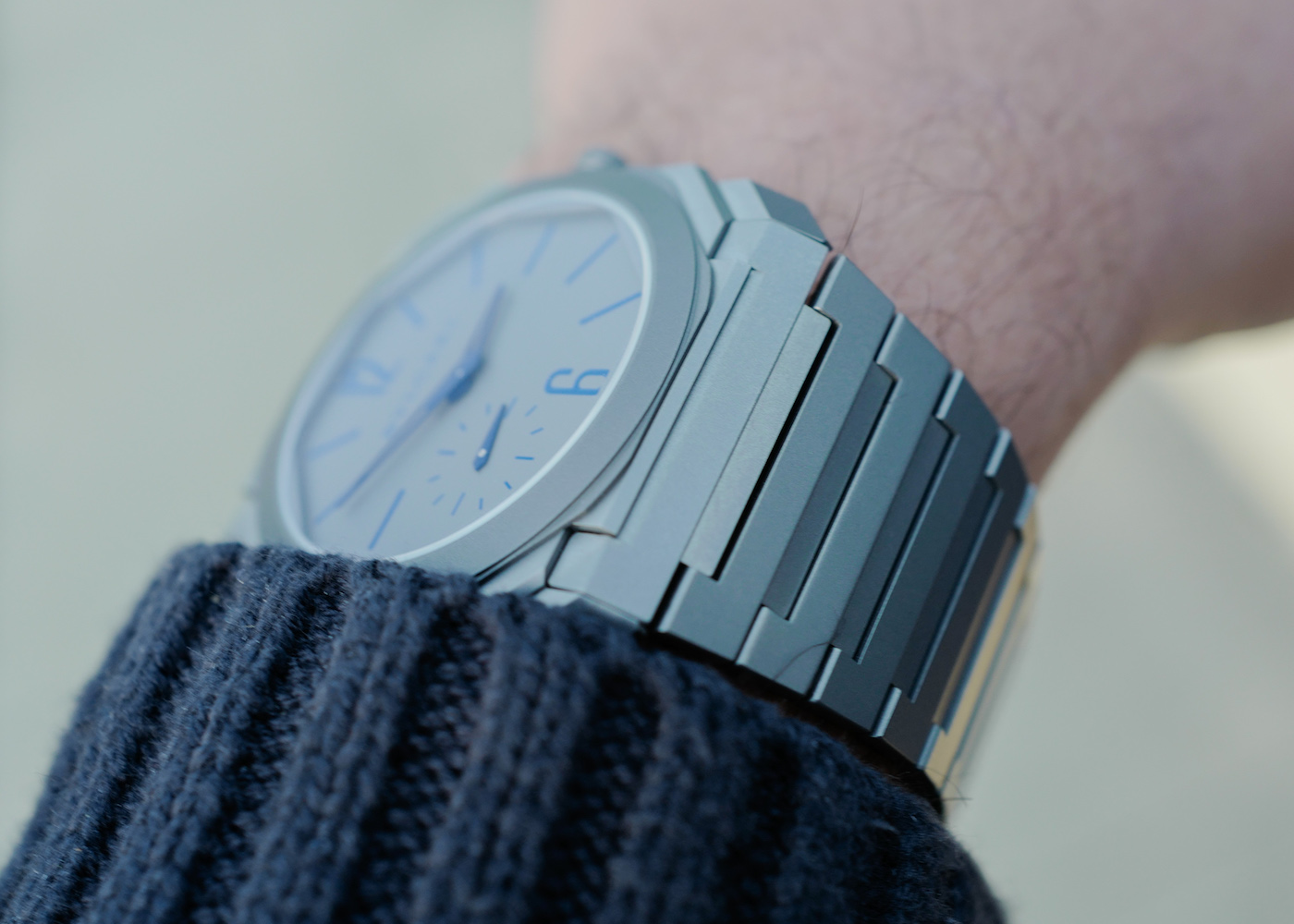 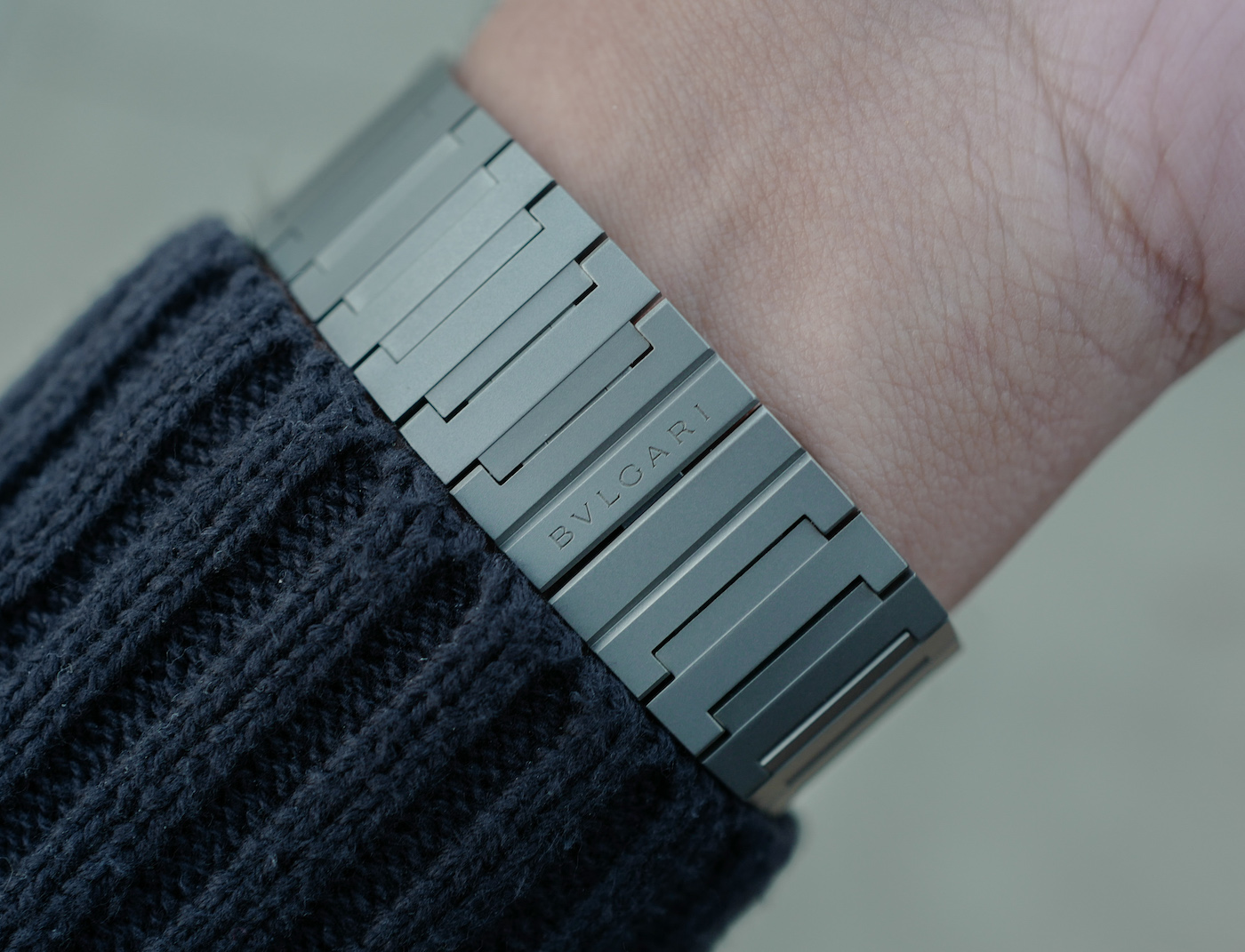 Just as remarkable as the case itself is the bracelet, the two of which exist in seamless harmony. The Y-shaped links are 2.5mm-thick and taper down in width as they approach the butterfly clasp. This clasp type was necessary due to how thin the titanium bracelet is, and once you’ve got it sized properly, it wears incredibly comfortably. The watch is available on a leather strap but, in my opinion, that’s just sacrilege.  The bracelet is just part of the identity. I know some people like to wear a strap over a bracelet because of wear and tear but, again, this titanium bracelet withstands most everything. 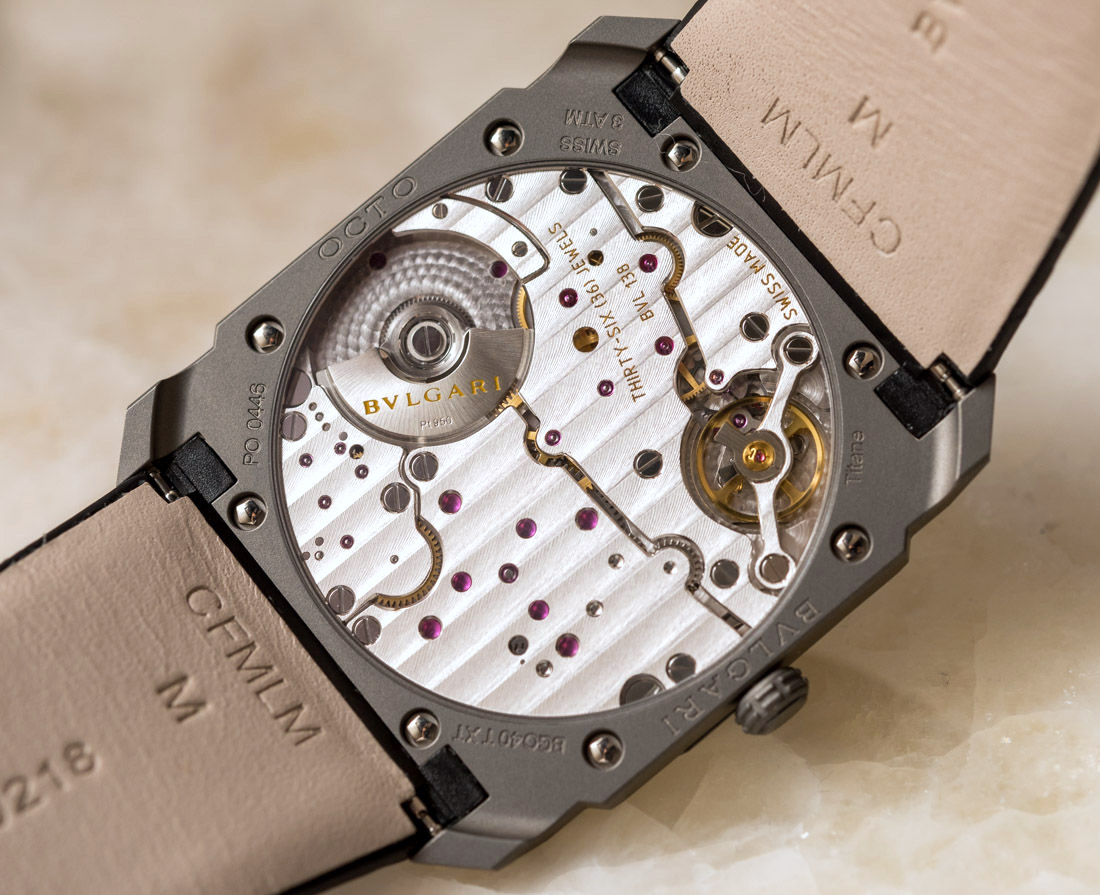 It’s been discussed in depth for some time now, but the in-house BVL 138 platinum micro-rotor automatic movement still merits high praise. It measures just 2.23mm-thick, but it’s wider than you might guess with a diameter of 36.6mm. This is necessary to achieve the impressive 60-hour power reserve movement that operates at 3 Hz. As our David Bredan wrote when the watch was first released, “Bulgari says they had to somewhat limit the size and capacity of the mainspring because there is a limit to how strong a spring the small, Pt950 platinum micro-rotor can replenish with energy.” 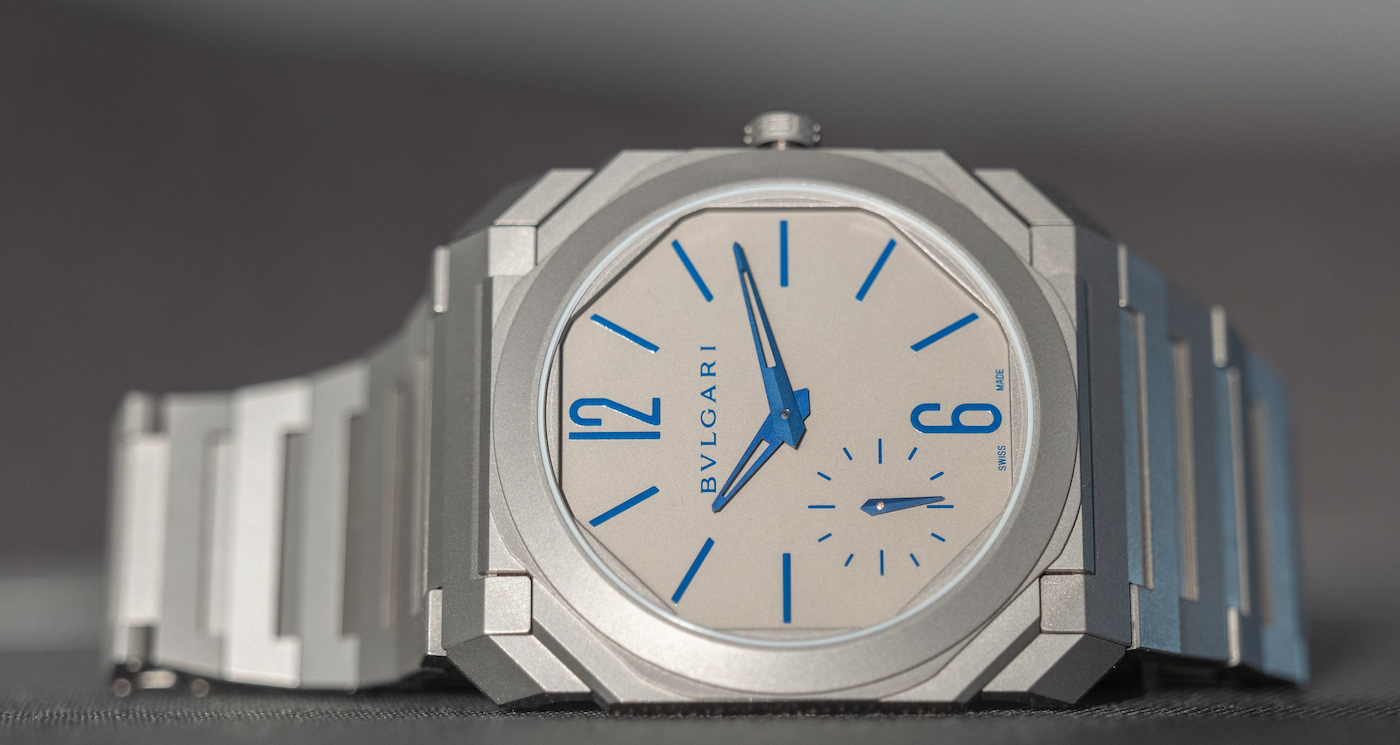 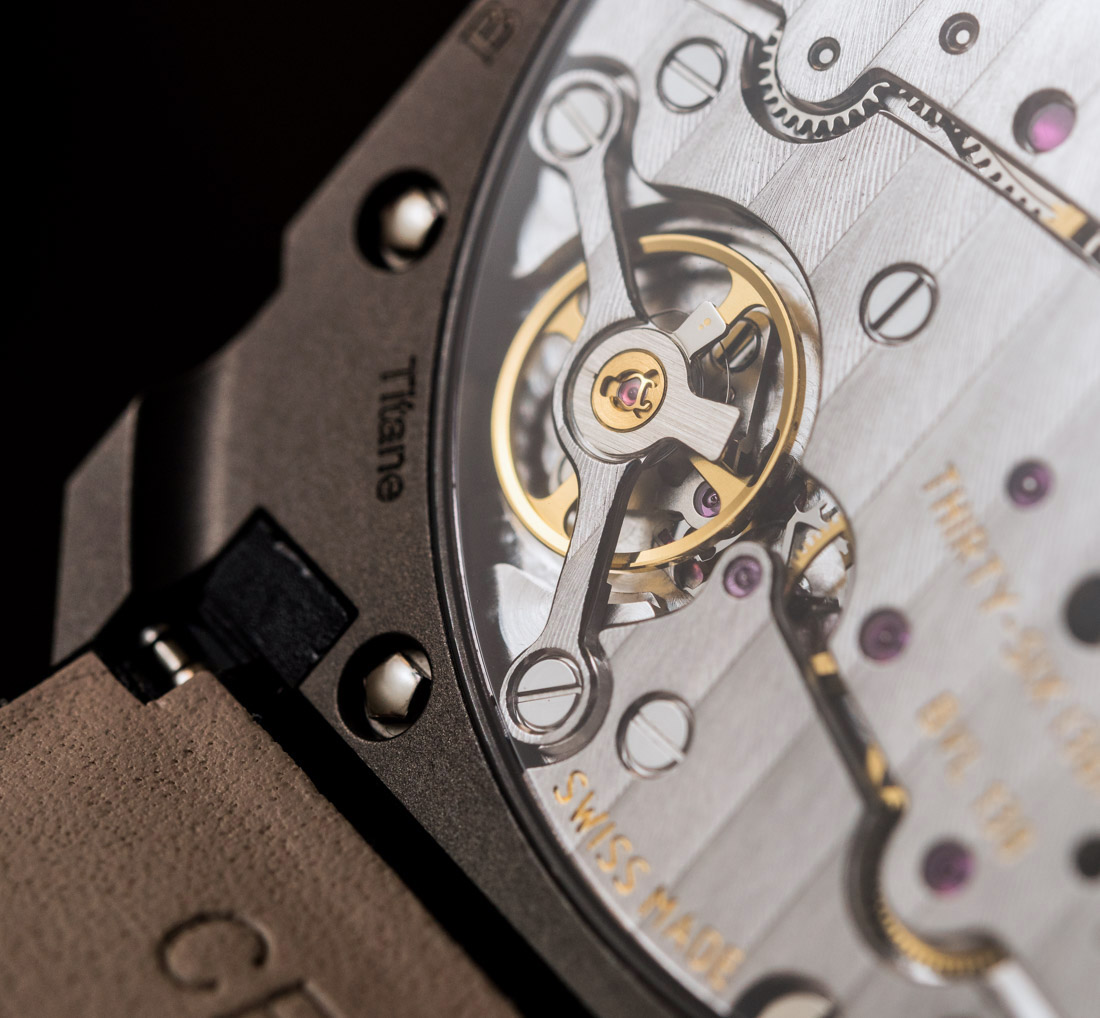 This is all well and good, but when it comes to the wearing experience, you just appreciate the accuracy, power reserve, and the view into the watch from the exhibition caseback. It almost looks like you’re gazing into some hyper-realistic hologram when you turn the watch around. Of course, it’s an elaborate, highly sophisticated mechanical movement that is packed into such a slim case. Childlike wonder is the best way to describe the feeling, and I am someone intimately familiar with some of the most impressive timepieces out there. For friends and family to whom I showed the caseback, the reaction was pure disbelief, followed by the same feeling of childlike wonder I would find myself lost in. The Côtes de Genève, chamfering, and perlage finishing of the movement is exactly along the lines of quality finishing you’d expect. 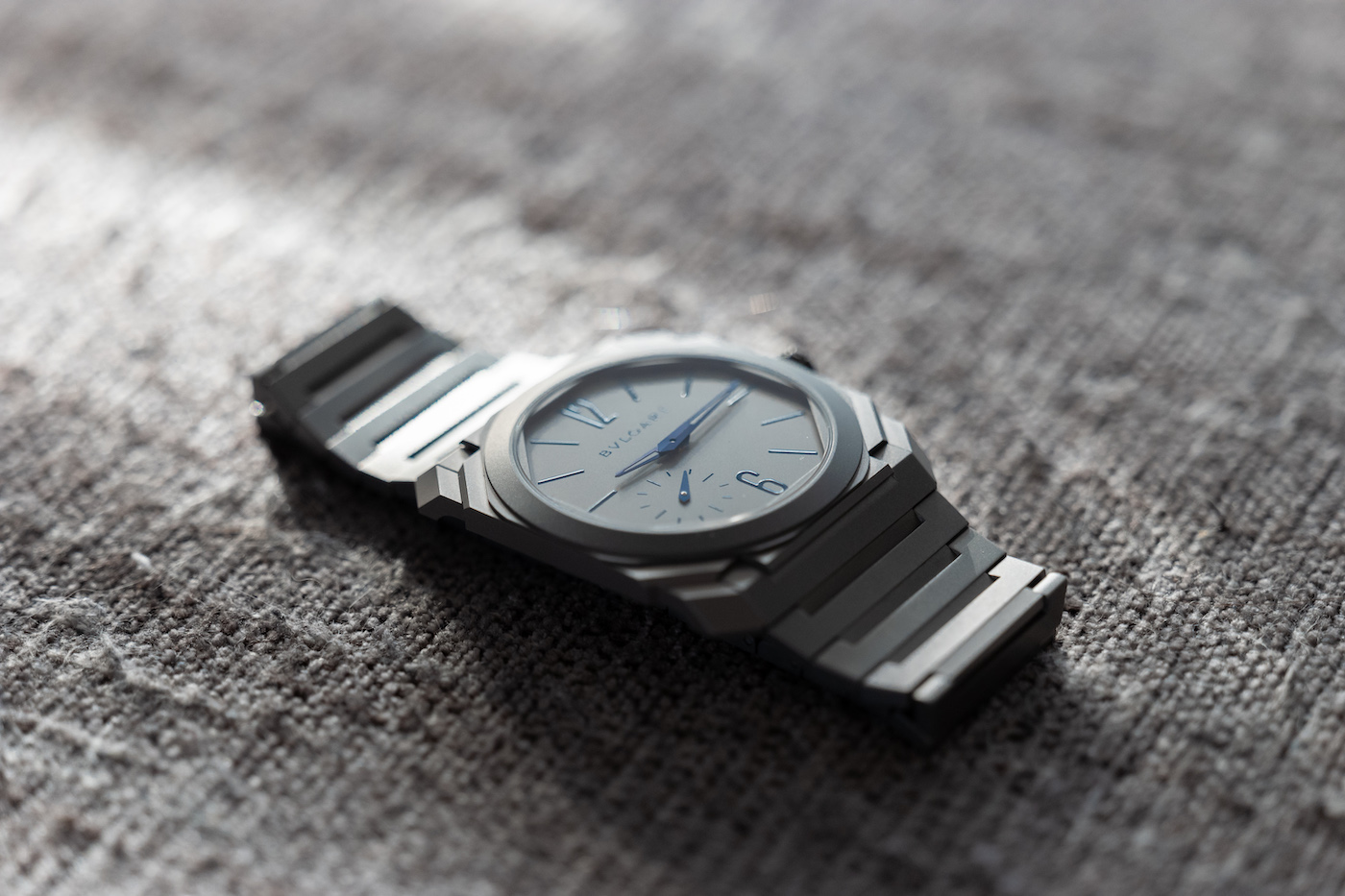 A big reason I like to review watches at least a year or two after they hit the market is to see how they can hold their value. I wasn’t surprised to learn that the Bulgari Octo Finissimo, in both titanium and steel, on the bracelet don’t lose their value to a significant degree once you wear it out of the boutique.  First off, the watch isn’t easy to find, as there are only eight examples for sale in the United States and something like 40 worldwide (when looking at Chrono24). At a glance, the Octo Finissimo (with box and papers) on bracelet can retain somewhere between 80-85% of its value after you walk out with it. That’s really quite good. 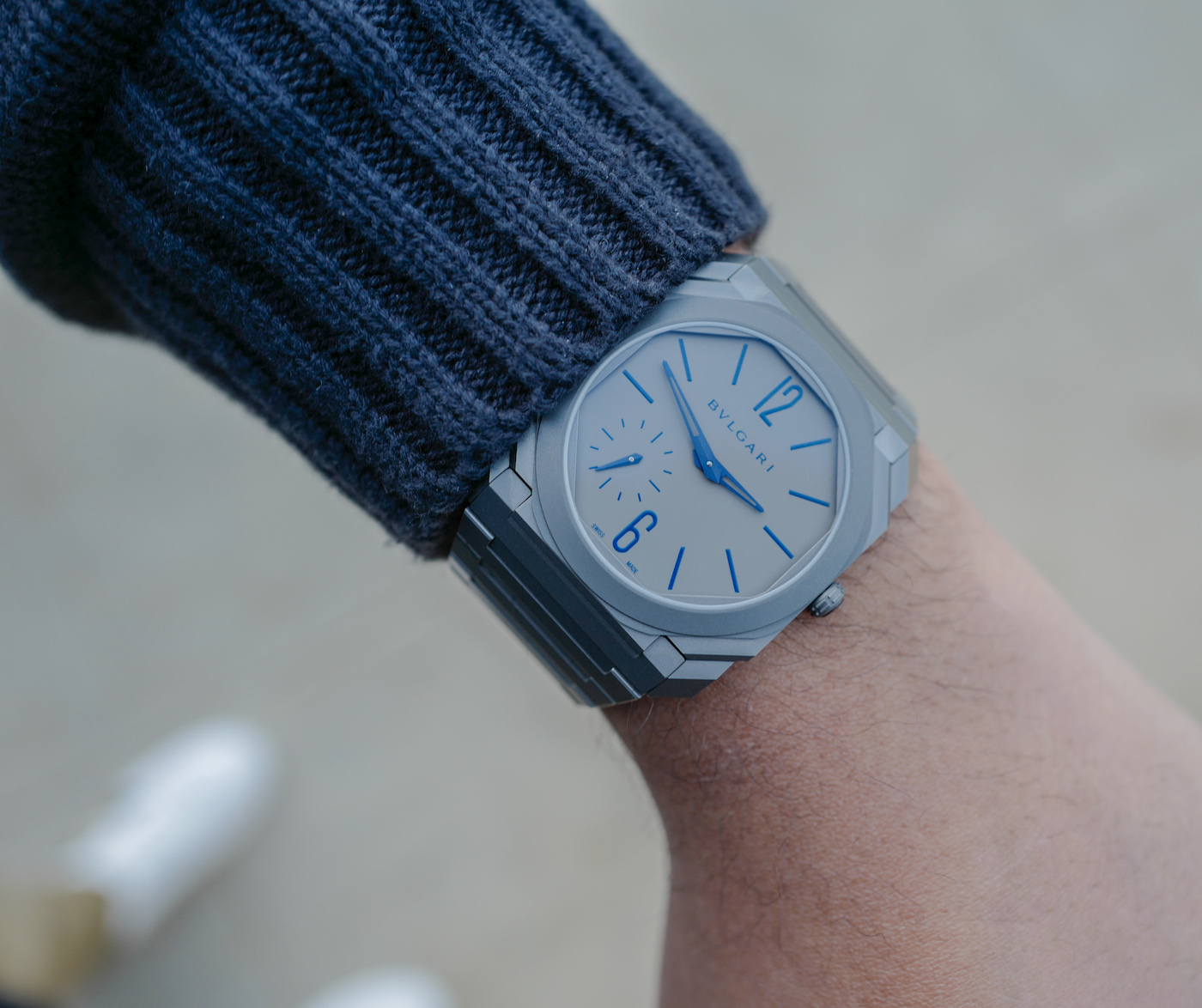 As for competition, it’s pretty slim pickings. There is obviously the Audemars Piguet Royal Oak, of which there are two versions to look at. The standard three-hand Royal Oak is a 41mm-wide and 10.4mm-thick in steel, at a price of $19,200. There is also the hard-to-find Royal Oak “Jumbo” Extra-Thin, which comes in a 39mm-wide and 8.1mm-thick steel case, which is priced at $24,700 (again, availability is tough). The other obvious pick would be Gerald Genta designed Patek Phillip Nautilus in steel measuring 40mm-wide and 8.3mm-thick. It’s almost a joke to mention the list price of $29,800 but there you have it. 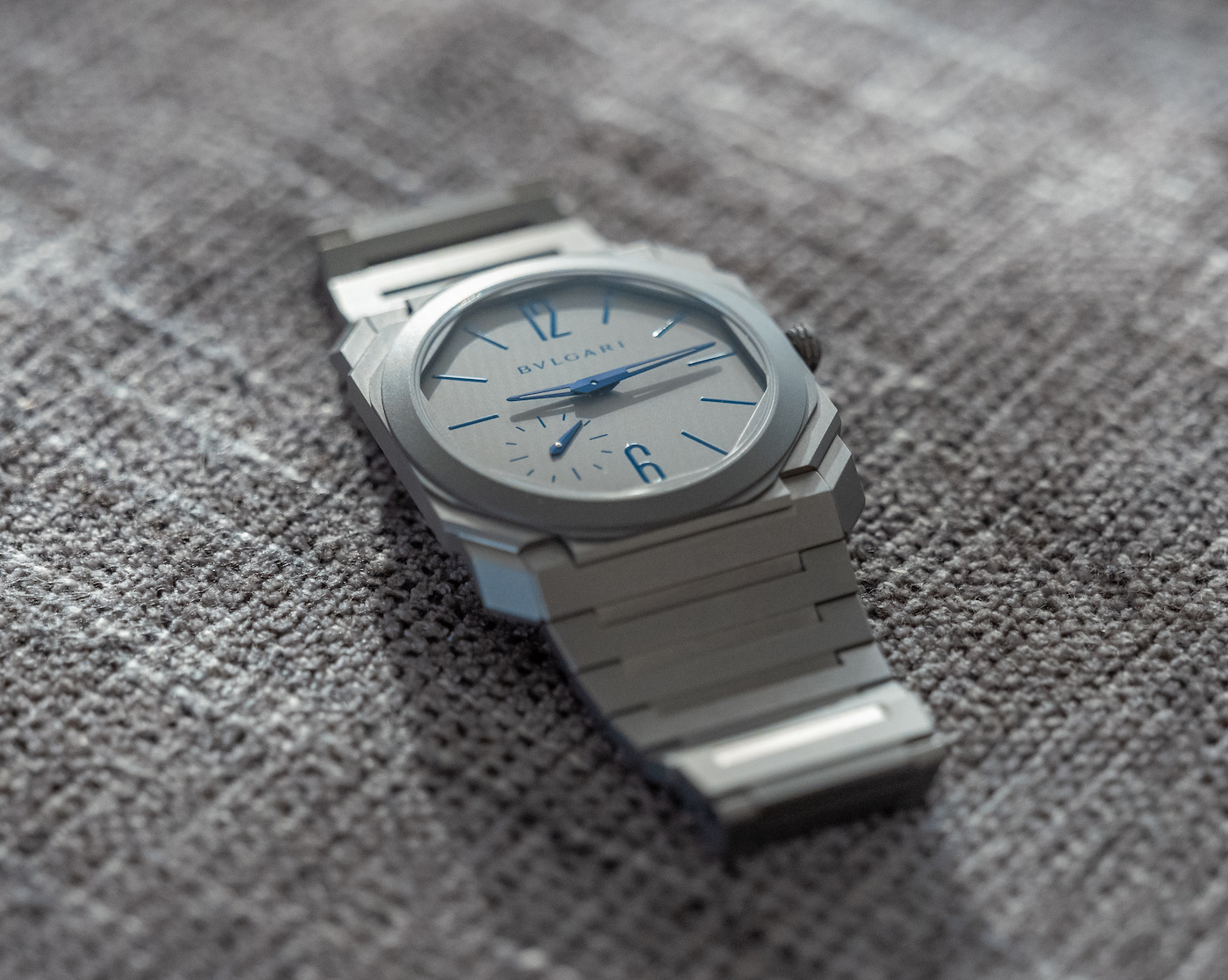 However, I think a more creative competitor would actually be the Patek Philippe Golden Ellipse. In a rose gold case for its 50th-anniversary model, this watch uses the automatic caliber 240 movement, which measures 2.53mm-thick. The watch, itself, measures 34.5mm-wide and only 5.9mm-thick. The instantly recognizable oblong case isn’t at all like the Octo Finissimo in appearance, but it stands alone, just like the Octo Finissimo. Thin in profile and distinct in design, the Golden Ellipse is priced at $30,800. 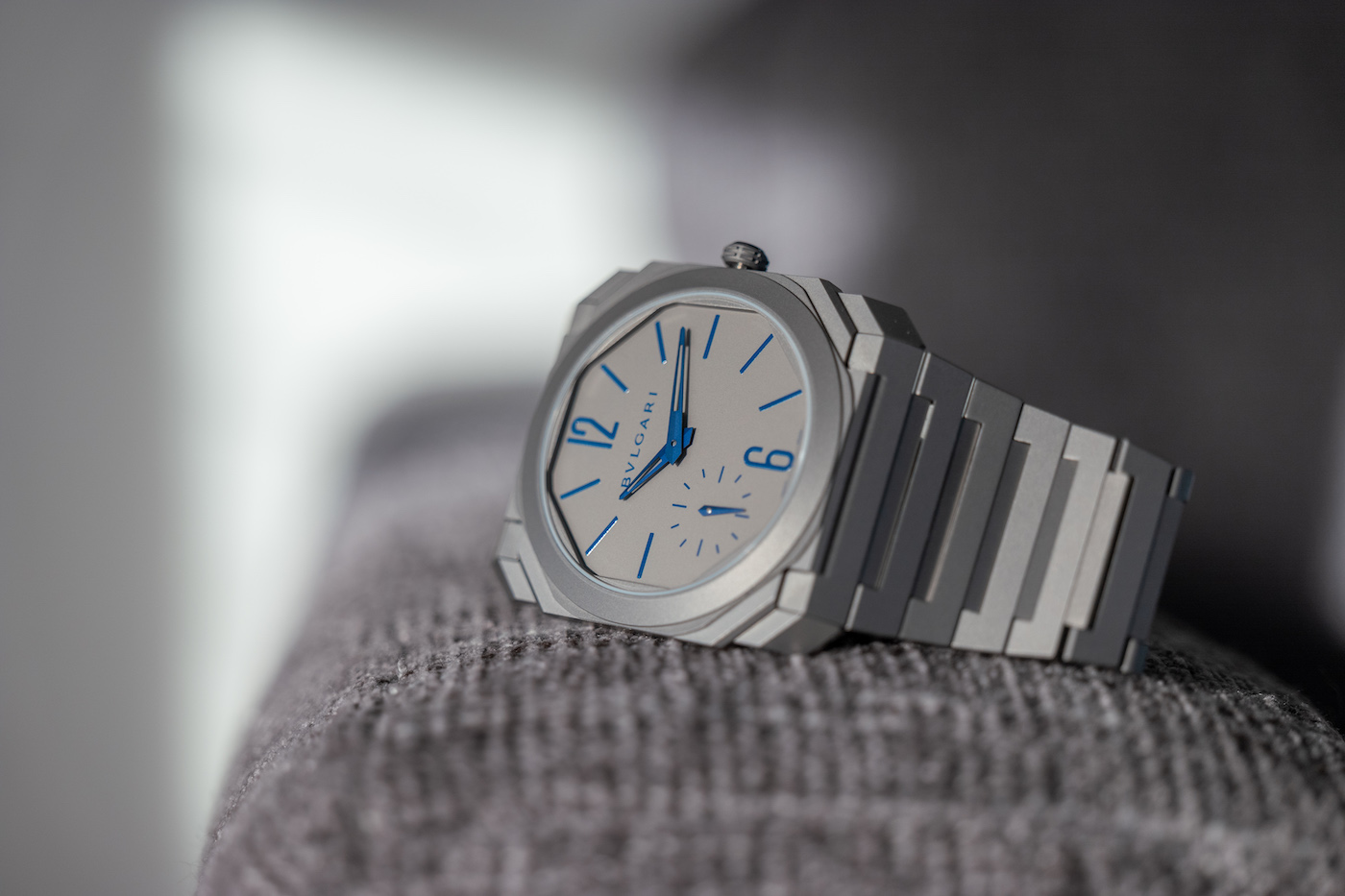 The Bulgari Octo Finissimo Automatic is a watch I’ll likely add to my personal collection, to be completely honest. I think it is a rare contemporary watch that looks like nothing else out there and has created its own lane in the dressy sports watch category. As slim as anything out there, done in a resistant titanium that can handle daily wear, and a divisive design that is loved, rather than simply liked. And if you don’t love it, you definitely won’t forget it.

Price for the Bulgari Octo Finissimo starts at $12,200 on leather strap; the steel version on bracelet is $13,300, and titanium on titanium bracelet is $13,900. This 200-piece  limited-edition version that I reviewed was priced at $14,300. You can learn more about Bulgari watches on their website here.

Necessary Data
>Brand: Bulgari
>Model: Octo Finissimo Automatic Limited Edition
>Price: $14,300
>Size: 40mm-wide, 5.15mm-thick
>Would reviewer personally wear it: Yes, it’s a candidate for my personal collection.
>Friend we’d recommend it to first: A collector who values individuality and design over the reputation and prestige of more status-quo luxury watches.
>Best characteristic of watch: The design in tandem with thinness.
>Worst characteristic of watch: I wish the blue-dial edition weren’t limited to only 200 pieces, as I find the dial far superior to the black.