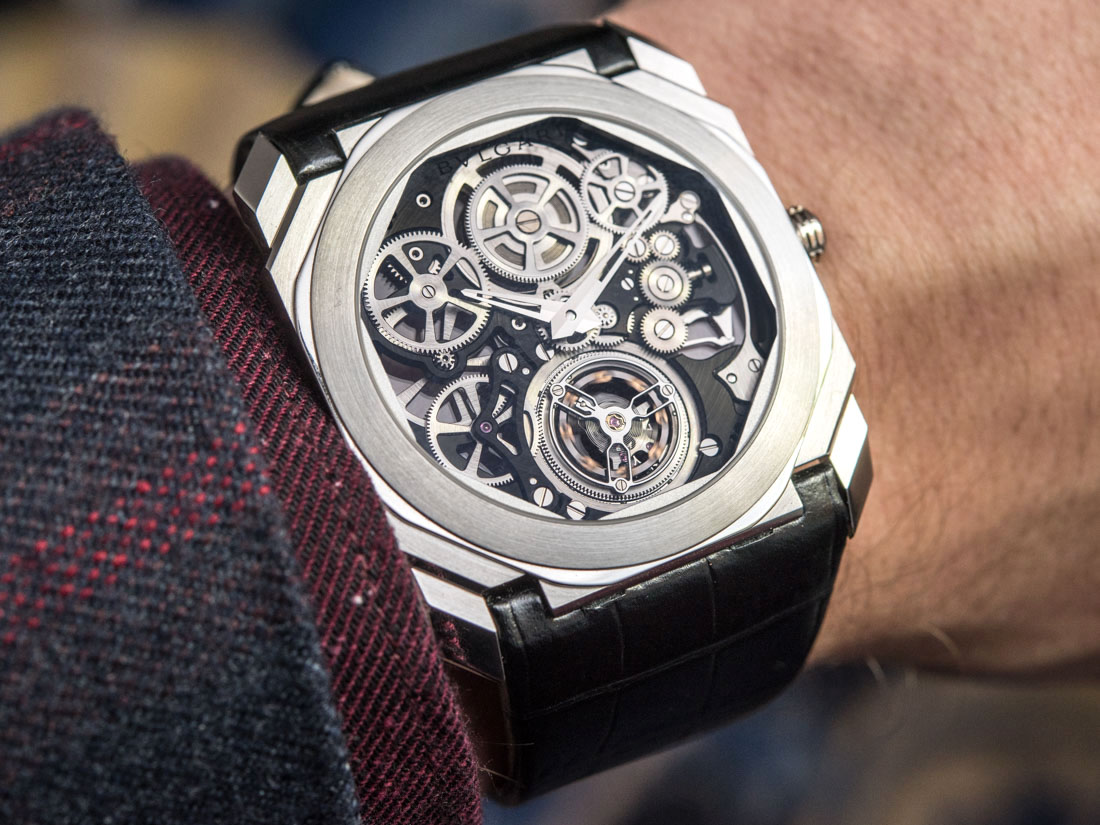 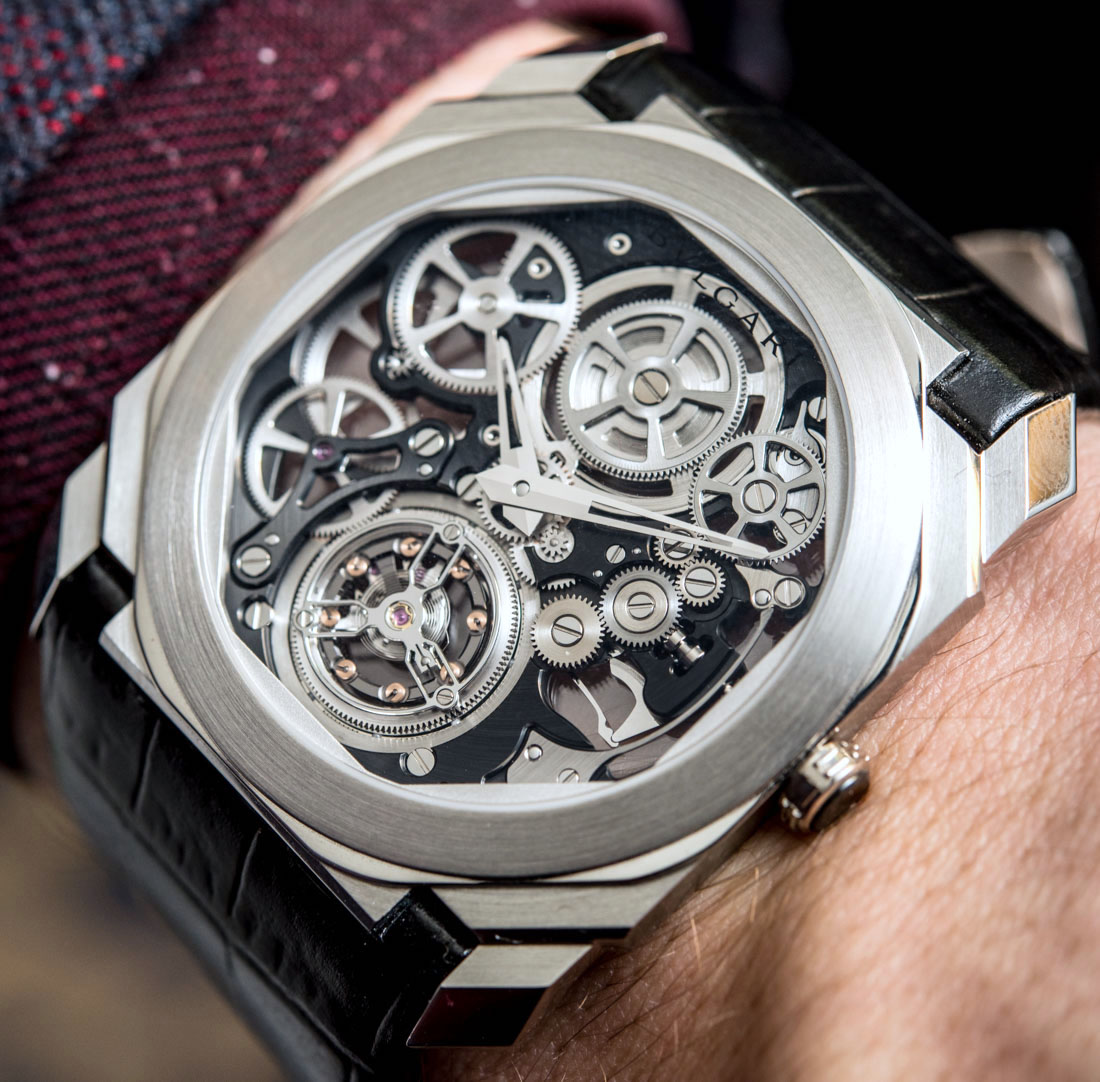 I still feel cautious when calling one of the most prominent and successful luxury brands a plucky underdog, but I’ll do it anyway because that is what Bulgari largely remains in the field of watchmaking; and that is also why I enjoyed going hands-on with their latest and thinnest statement-watch if there ever was one, the Bulgari Octo Finissimo Tourbillon Skeleton. 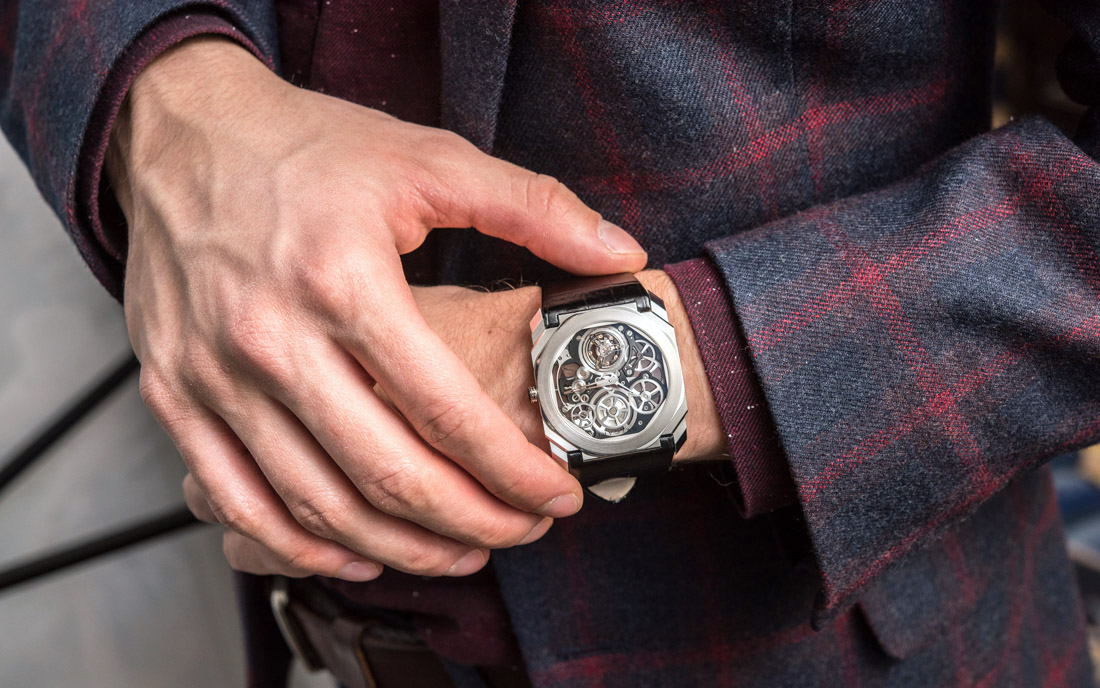 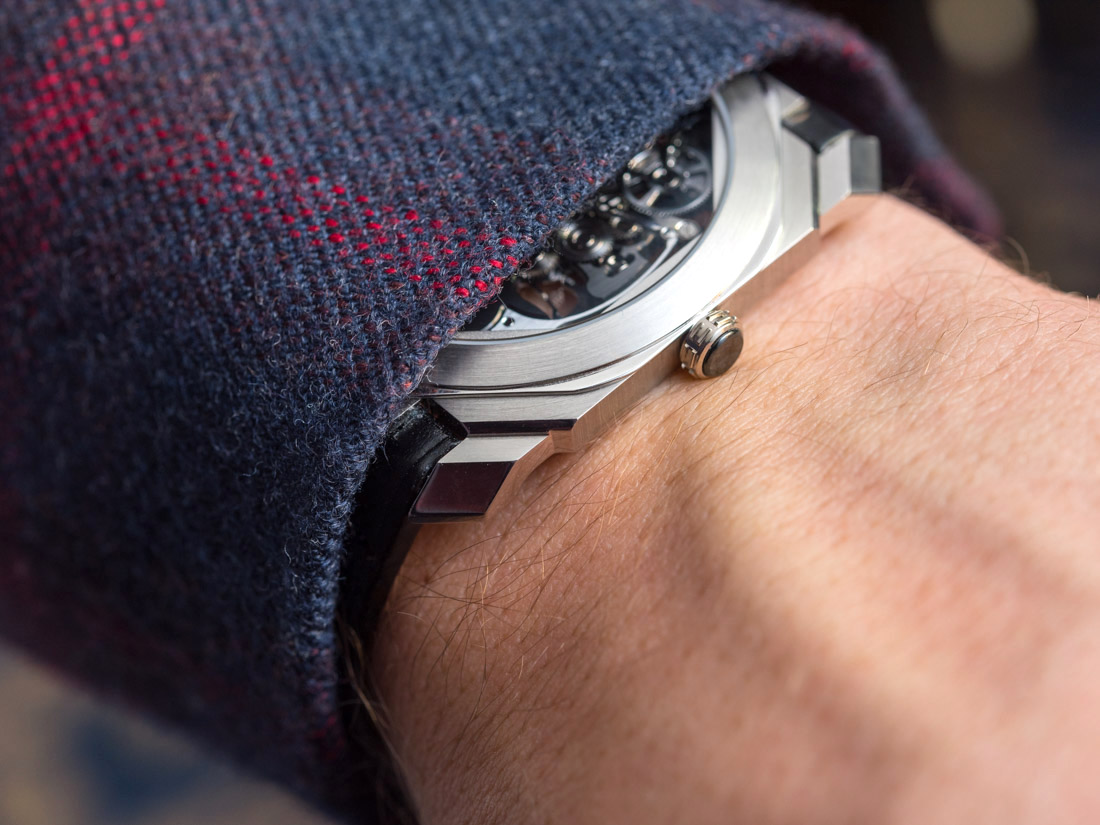 You see, Bulgari has put tremendous effort, plus Lord only knows (and company accountants) how much money into becoming a fully fledged manufacture that supplies its own cases, dials, as well as both run-of-the-mill “solotempo” time-only movements and profane, 1,000-plus-component Magsonic Sonnerie calibers alike. Yet, it is noticeable novelties such as this new Octo that play a major role in overcoming at least some of the challenges in gaining acceptance in the very slow-moving and protectionist watch industry. 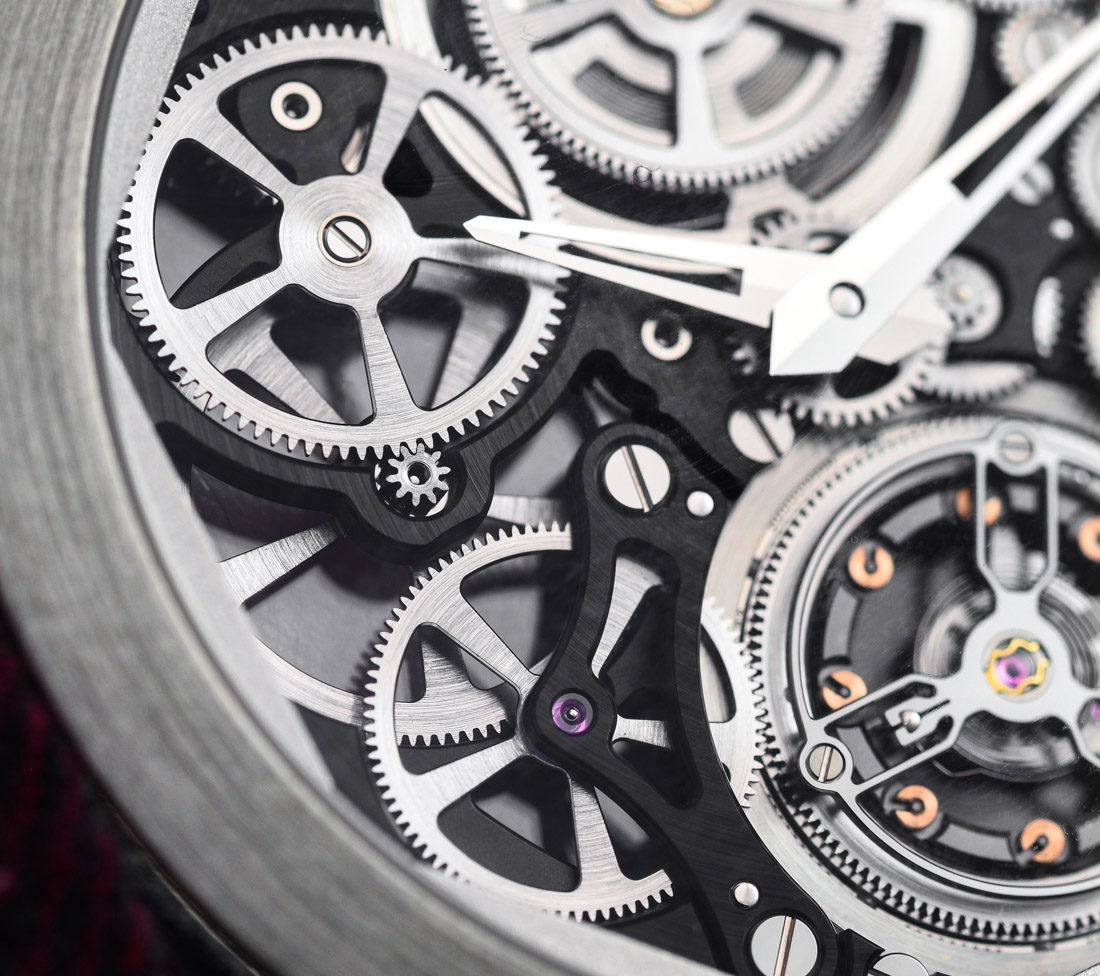 Oh, and it isn’t just the brands, who move slow and create a largely unwelcoming environment, but a lot of the watch enthusiasts and collectors as well. I’m not trying to make a case for empathy for an industry giant with a billion-dollar annual revenue, but rather say that it takes so much more than throwing mind-numbing amounts of money at acquisitions and expecting success and consumer acceptance to develop overnight. Bulgari seems to understand that when it comes to their watch department. 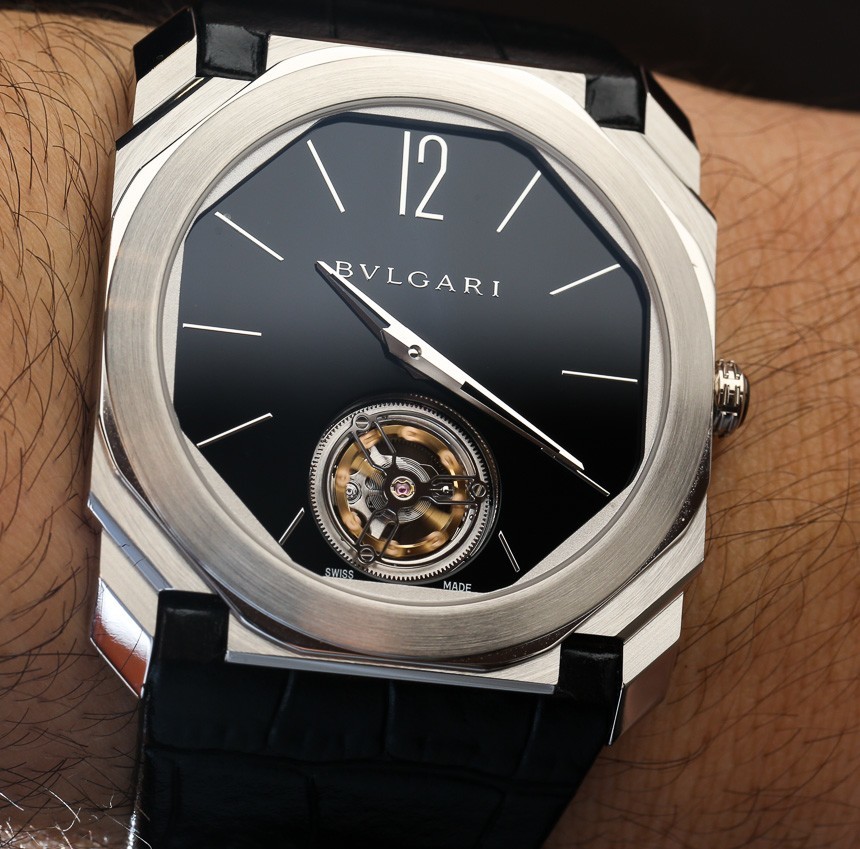 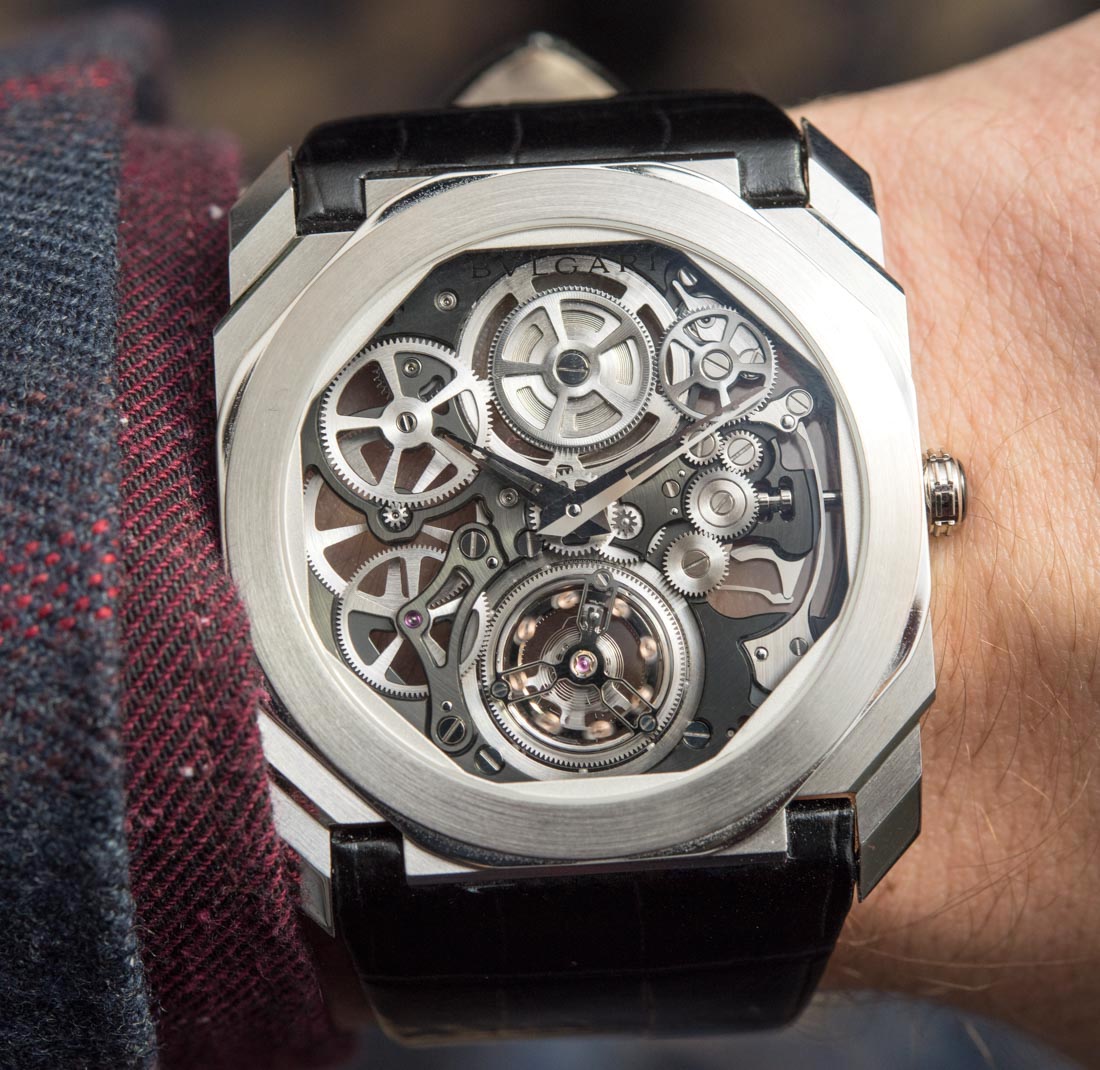 The Bulgari Octo Finissimo Tourbillon, with its fully in-house extra-thin movement, made its quiet debut some three years ago at BaselWorld 2014 only to claim (and to this date hold) the important horological record of thinnest tourbillon in the world. We went hands-on with the debut piece Bulgari Octo Finissimo Tourbillon here, and you can really appreciate just how restrained that 5mm-thick and 40mm-wide platinum case looked.

As you can see by comparing the debut model with the solid dial and this latest iteration without it, the watch is entirely transformed, even though all other factors are left intact – case size, strap, hands, everything is the same. More on the looks of this latest version in a bit, but first let’s talk some movement specs. 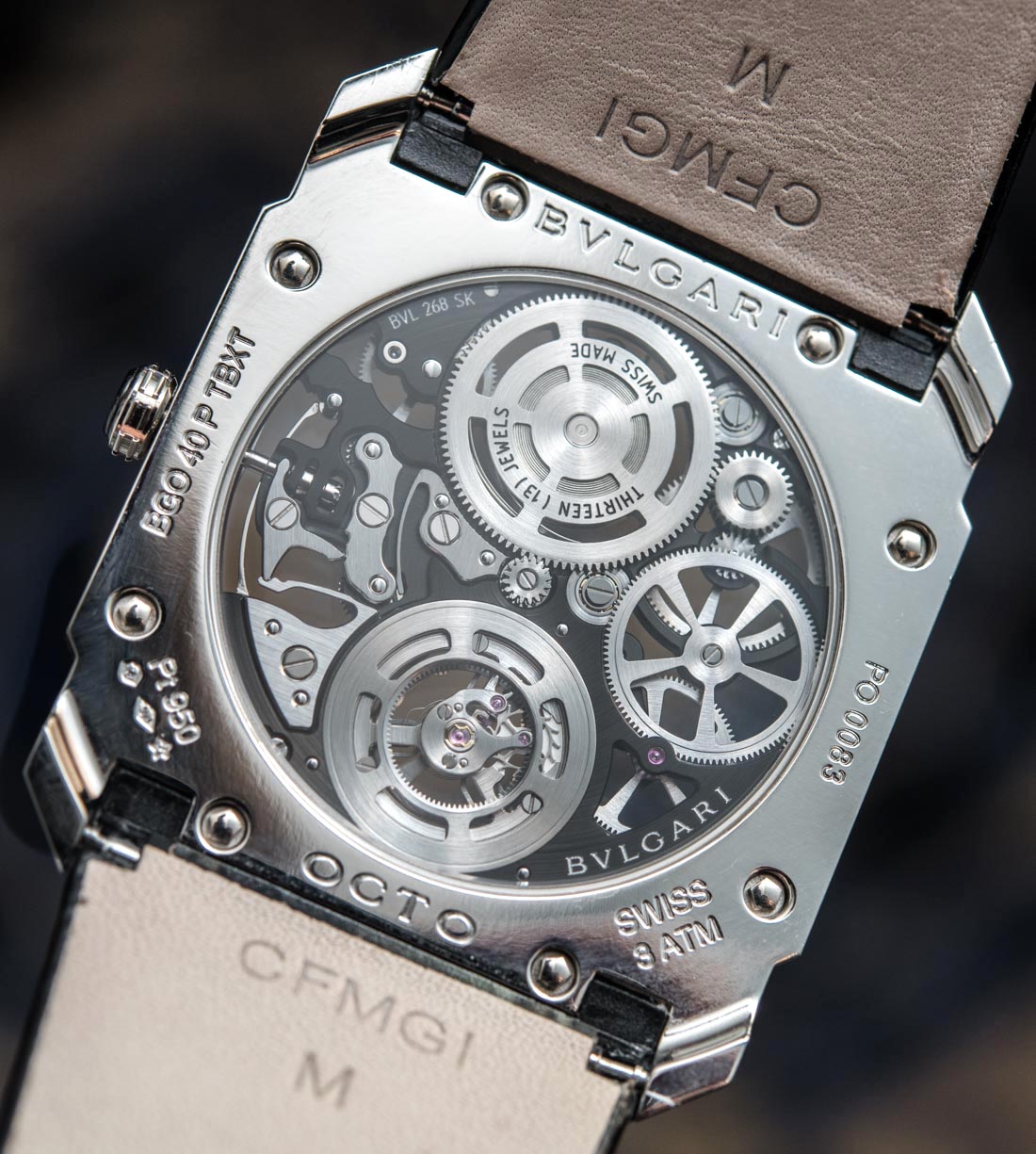 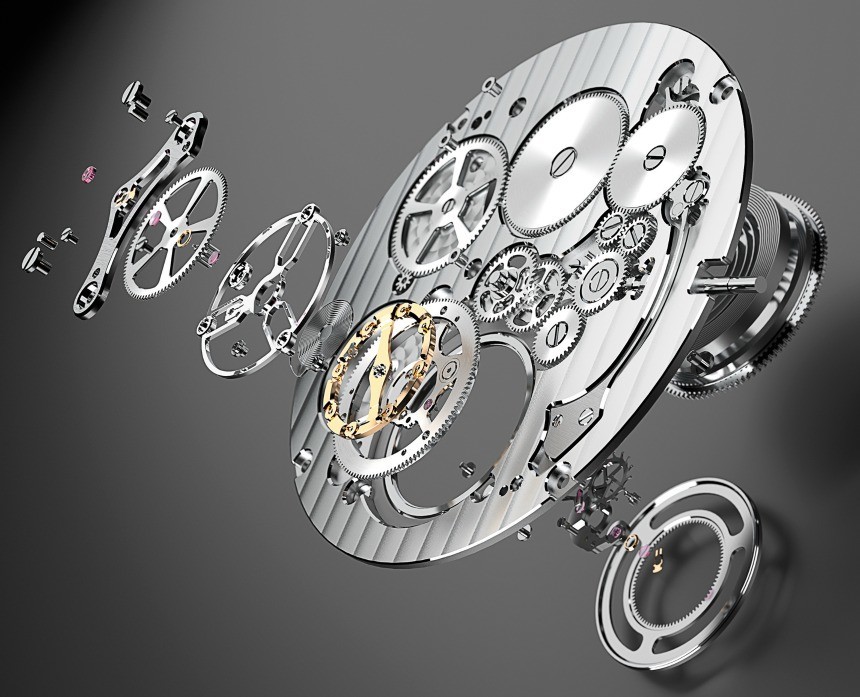 Thanks to a remarkably clever movement layout and, of course, extremely thin components everywhere, the Bulgari BVL268 Finissimo caliber packs its 253 parts into a 32.60mm-wide and 1.95mm-thick, less-than-wafer-thin layer. The one-minute flying tourbillon spins on ball bearings to reduce height and offer a secure, low-wear setting from the case-back side. What’s left are a total of 13 jewels (a very low amount even for a time-only movement), some black DLC plates and bridges, and one barrel that supplies a neat 62-hour-long power reserve, albeit at the cost of a somewhat lower operating frequency of the balance wheel at 3Hz.

Click on the embedded video below to see the thinnest tourbillon in the world in action.

Properly high-tech and the thinnest in the world: 5"the new Bulgari Octo Finissimo Tourbillon Skeleton Shot by our @abtw_david with the @loupesystem on iPhone 6S Plus. 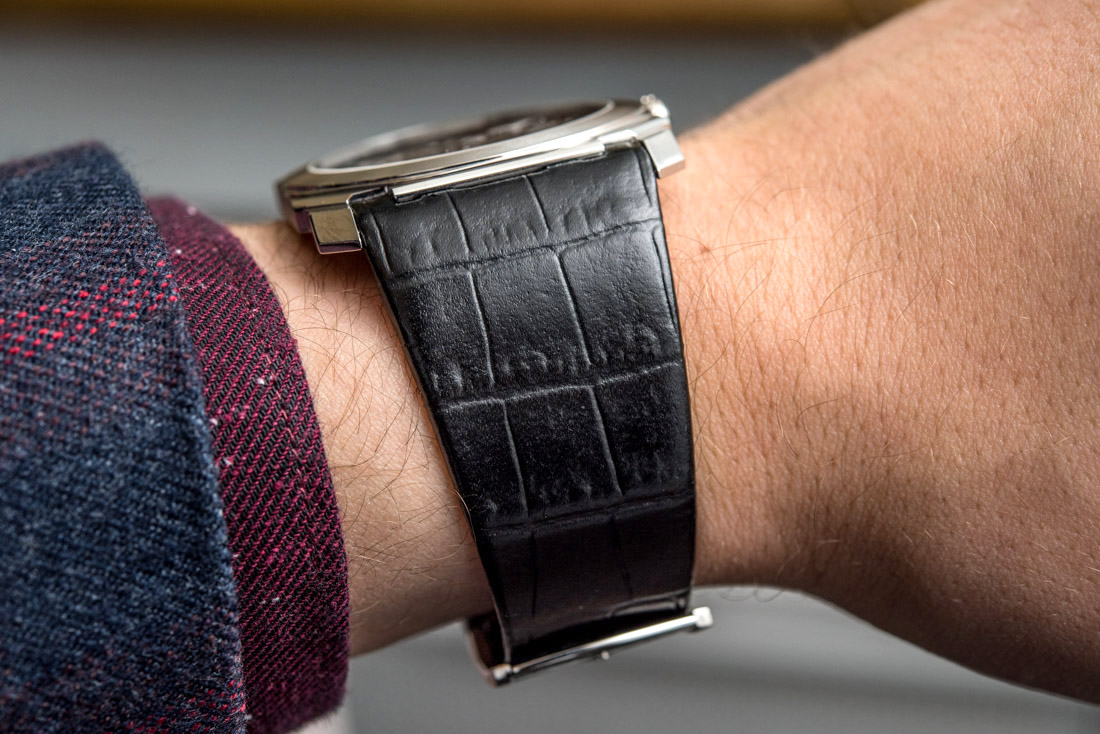 Bulgari even had to make the alligator strap considerably thinner than the ones matched to the regular Octo case (Velocissimo reviewed here), as otherwise it would be thicker than the 5.00mm-thick case. The end result is a watch that wears almost like a bracelet and, despite its platinum case, is almost unrealistically comfortable. On a side note, the ultimate comfort in a watch (or, come to think of it, anything) is not when you realize and are constantly reminded of a good fit, but when you can entirely forget about the item being there. 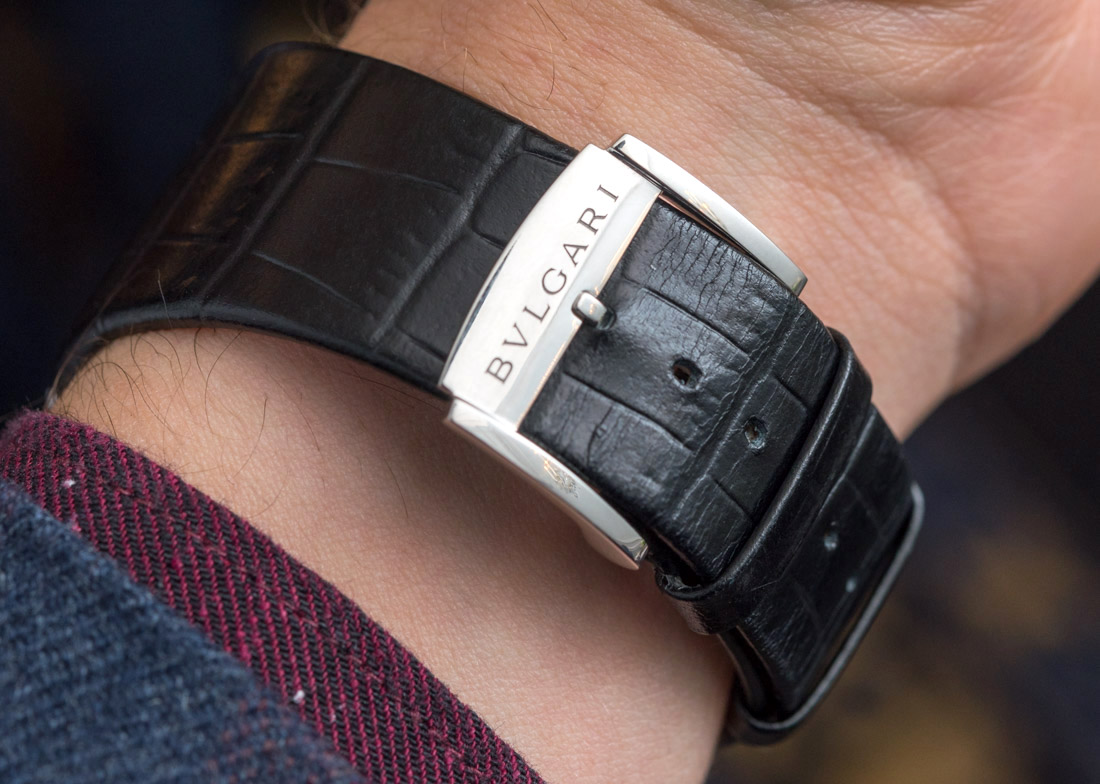 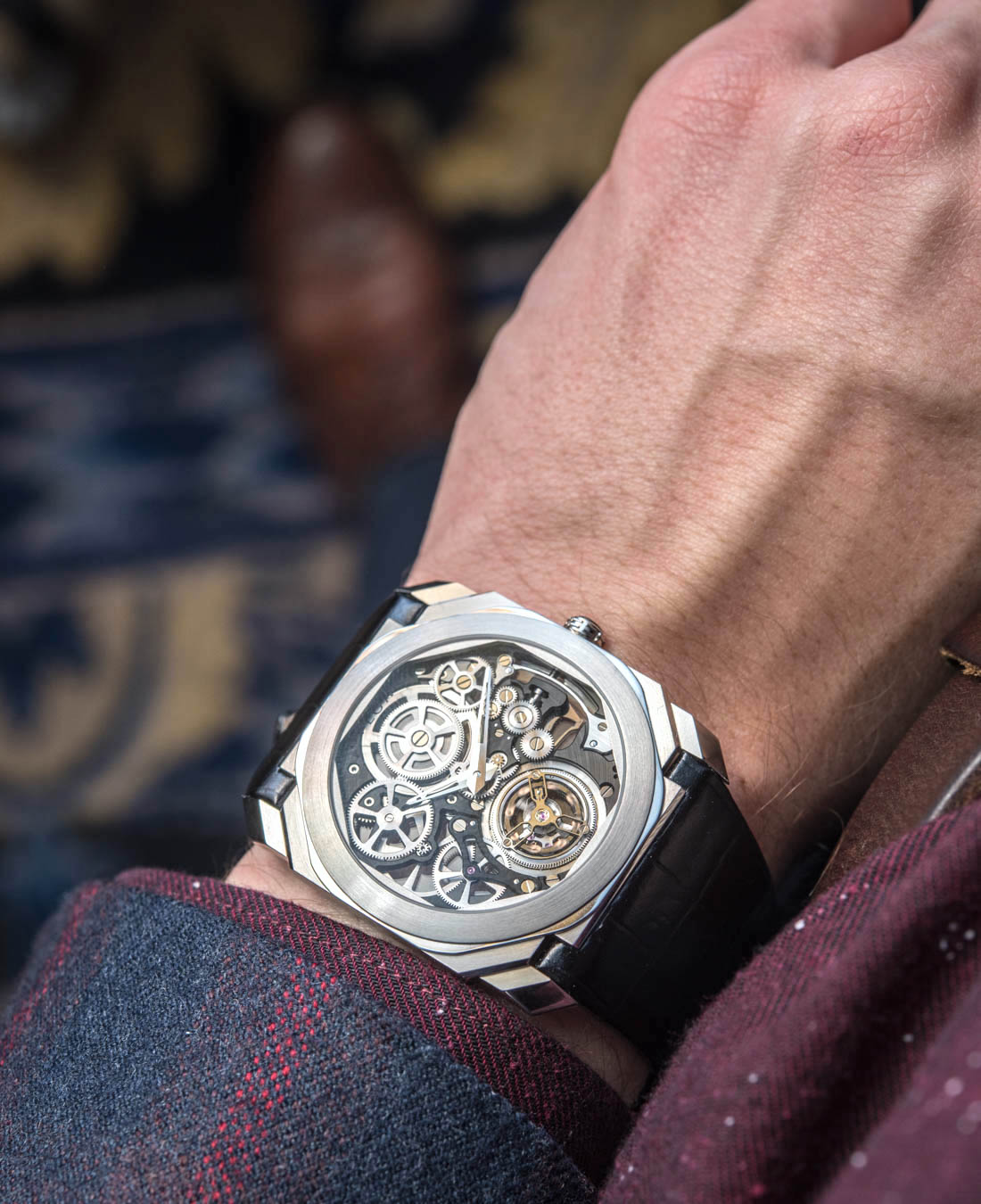 As much as the Bulgari Octo Finissimo Tourbillon Skeleton loves to shyly disappear under shirt sleeves, it is one heck of a noticeable watch that just demands attention. Despite its remarkable thinness, the heavy skeletonization of the wheels and some of the plates make the very shallow actual depth of the movement disappear and – from the front and relatively direct viewing angles, at least – make the BVL268 look like any other complex mechanical caliber. 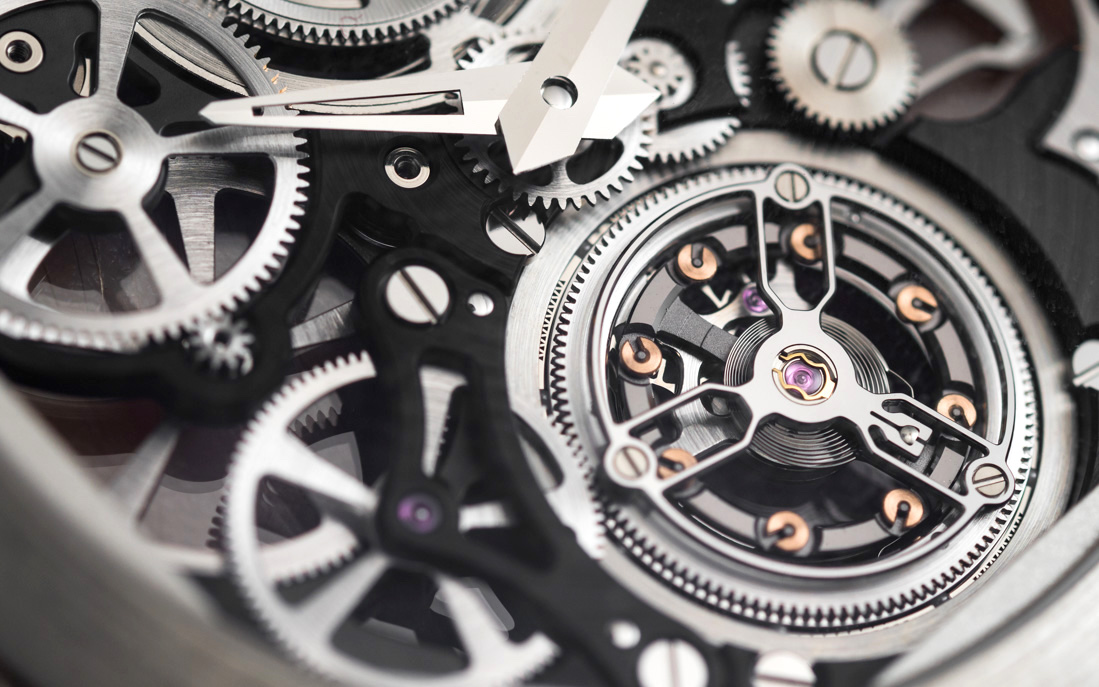 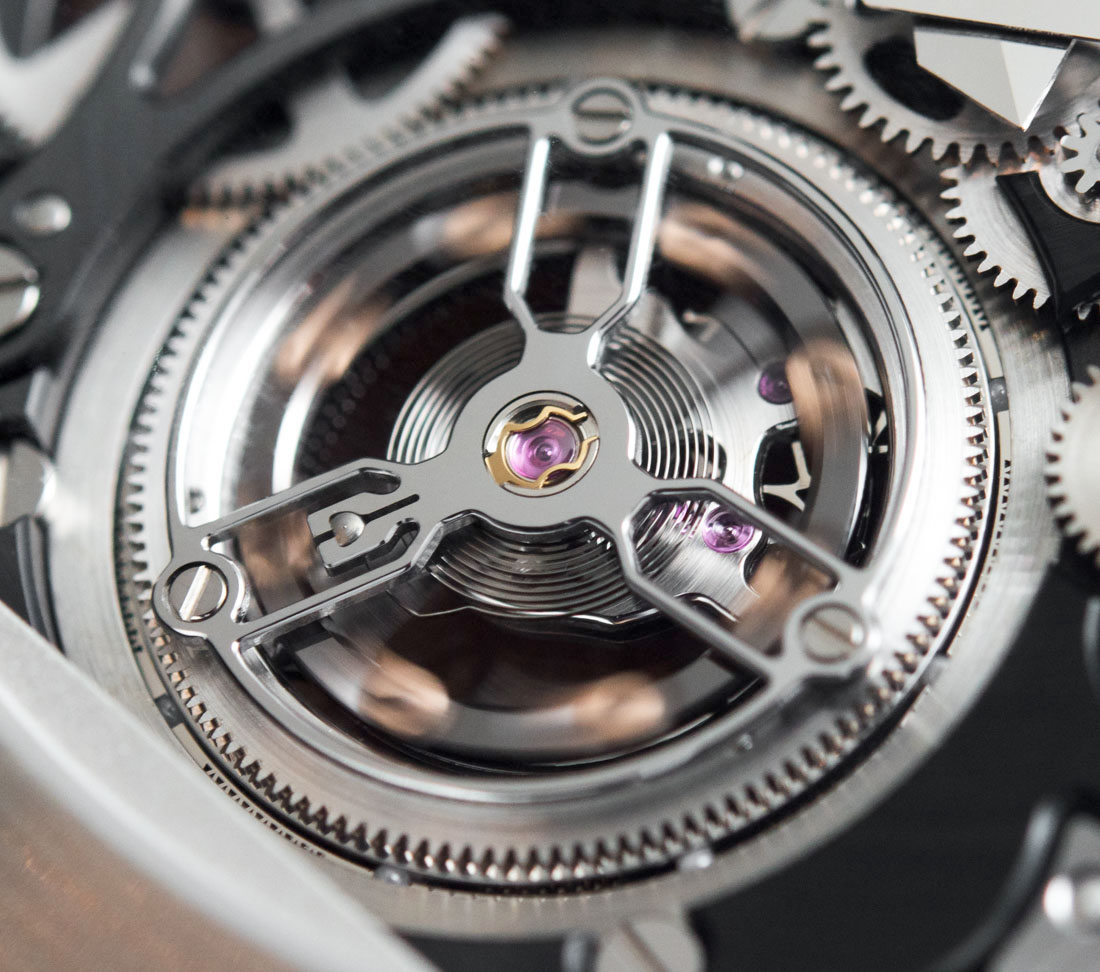 Quality of execution is stunning in its borderline futuristic way. Bulgari is admirably consistent in maintaining this look and not making the mistake of mixing it with some traditional elements. All the plates, wheels, and even the hands ooze the sort of angular, architecture-inspired, masculine angularity that we have grown used to seeing on the Bulgari Octo case and its 110 facets – which, mind you, must be a nightmare to finish in platinum. 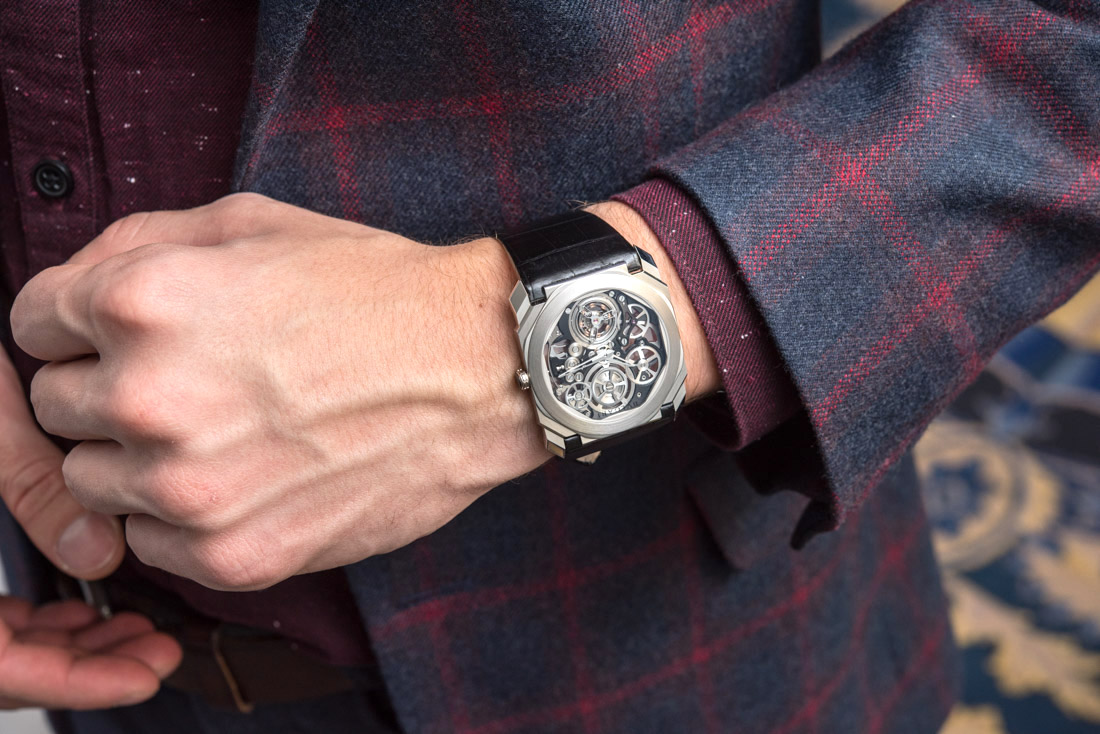 Okay, so it is technically impressive alright, but there is something more to this flagship Octo than that. While the record-thin Octo Minute Repeater (hands-on here with 3 other insane Bulgari minute repeaters, including video), similar to the Octo Finissimo in 2014, was another very surprising new record-setter from Bulgari, so far all the pieces looked restrained and elegant. What changed for the Bulgari Octo Finissimo Tourbillon Skeleton is that it, very cleverly, chose not to increase sheer size but rather aesthetic volume by taking a more brave approach and exposing its proudly in-house values. 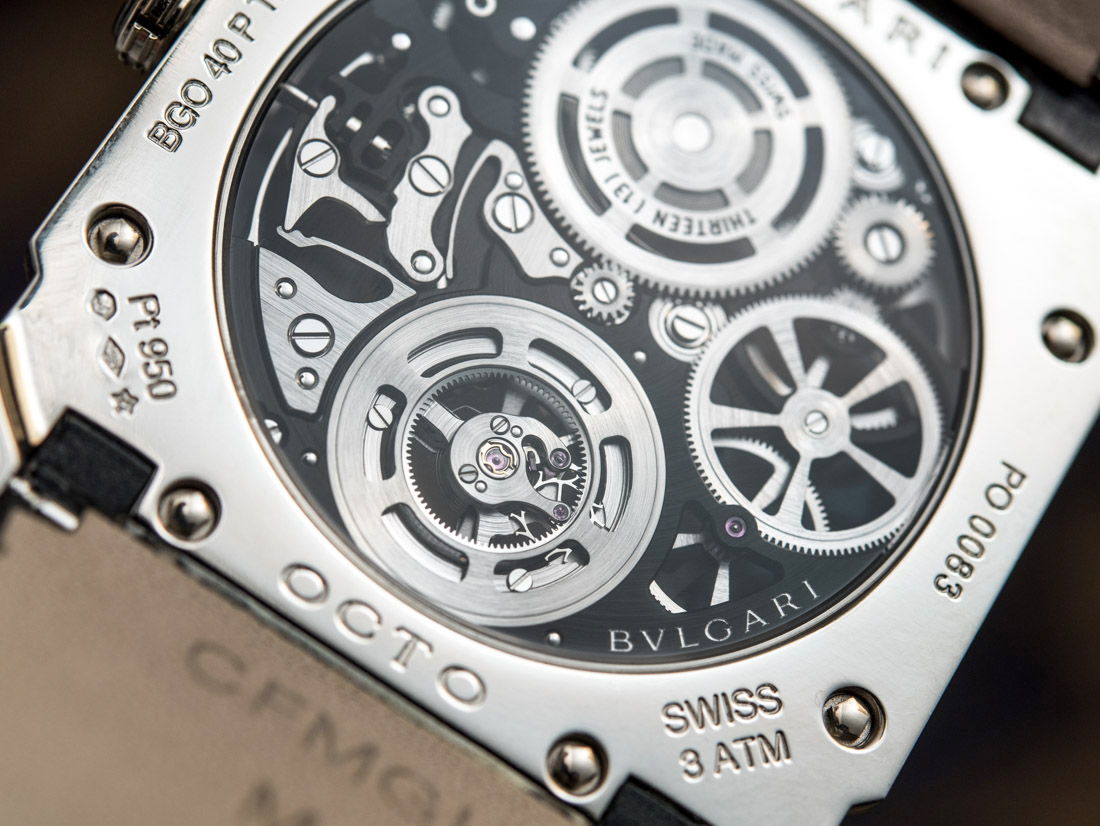 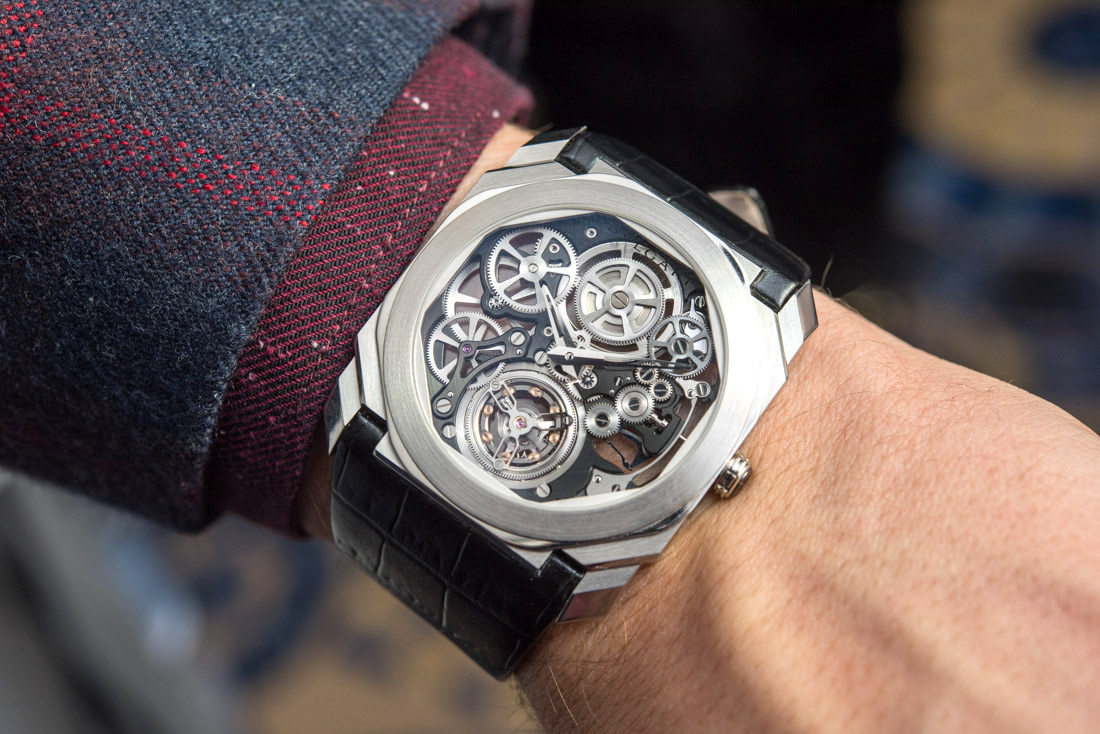 An interesting feat is that this skeletonized version not only hides its lack of body weight well, but also its lack of colors. The balance wheel’s variable inertia weights and some of the jewels add a few noticeable dashes of color to this sea of DLC black and rhodium grey. However, it is not due to these small spots of color, but rather to all the pieces falling together that make it so visually fascinating. Despite its finer details, this Bulgari Octo Finissimo Tourbillon Skeleton is one very bold watch that almost begs for attention when compared to the 2014 version, even though that also had its tourbillon exposed on the dial at 6 o’clock. 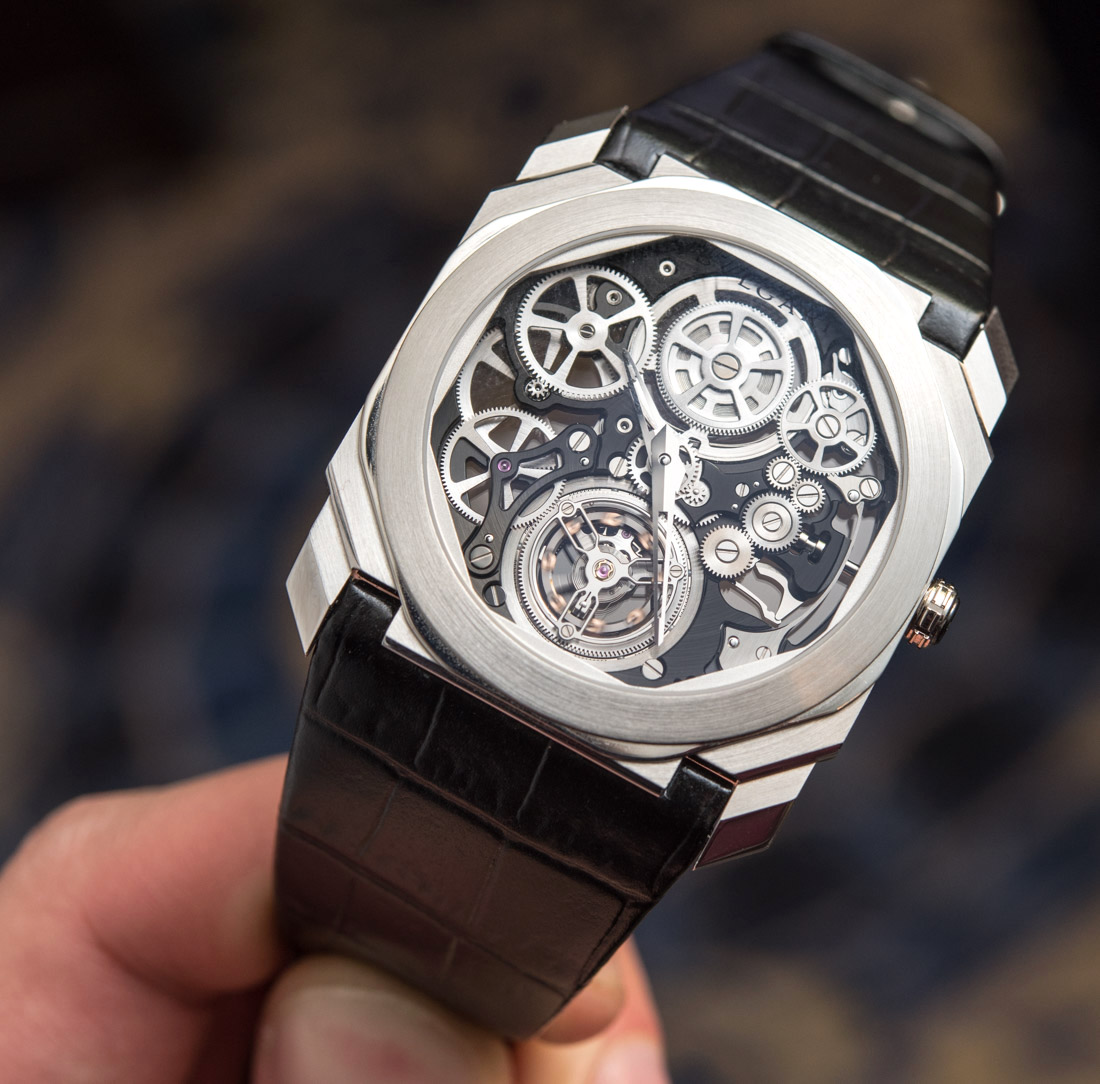 With an in-house-made platinum case and a skeletonized, record-setting manufacture movement, price is expectedly “up there”: the Bulgari Octo Finissimo Tourbillon Skeleton costs €140,000 or about $124,000. That is about $25,000 away from the ultra-thin Octo Finissimo Minute Repeater, making for a tough call to the brave collector who’s ready to take one of Bulgari’s record-setting-thin and very complex creations on. bulgari.com