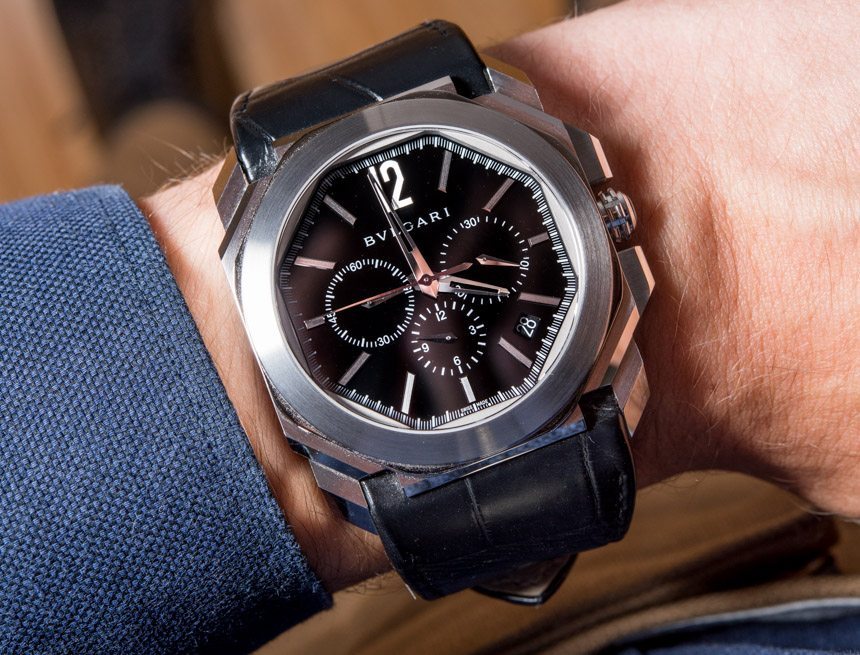 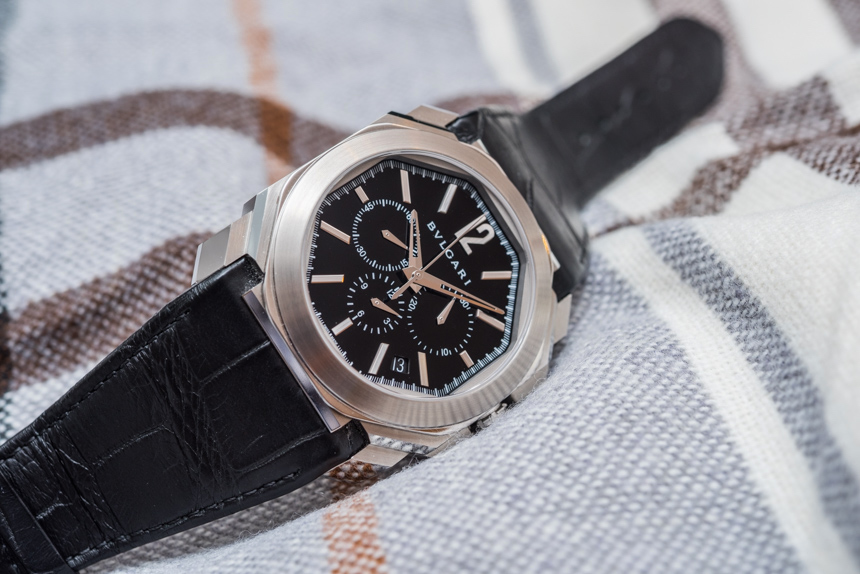 The octagon: ancient yet timeless, simple yet complex, common yet unique. These are some rather impressive attributes not just for a geometric shape but for… well… anything, really. It should be no wonder, then, that one of the most highly praised watch designers of all time, a certain Gerald Genta, also preferred to use this polygon in a fair number of his works. The question that we are looking to answer today is how one of them, the Bulgari Octo Velocissimo – yes, it is one of Genta’s designs and indeed a watch that refers to this iconic shape in its very name – performs and measures up against its tried and proven competition. 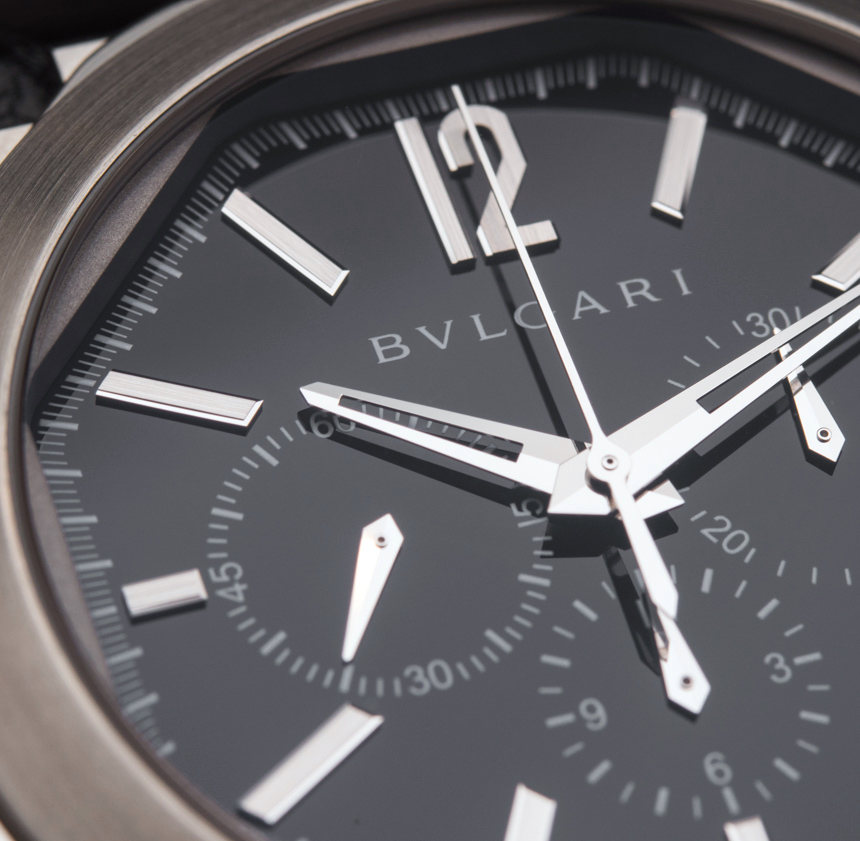 Bulgari took over the Gerald Genta and Daniel Roth brands in 2000, and since then has gone on to further develop upon and update some of the key designs of each brand. The Octo is one of Genta’s lesser-known works – but that status, as we shall discover through this closer look, is both rather undeserved and, in a few key ways, beneficial at the same time. 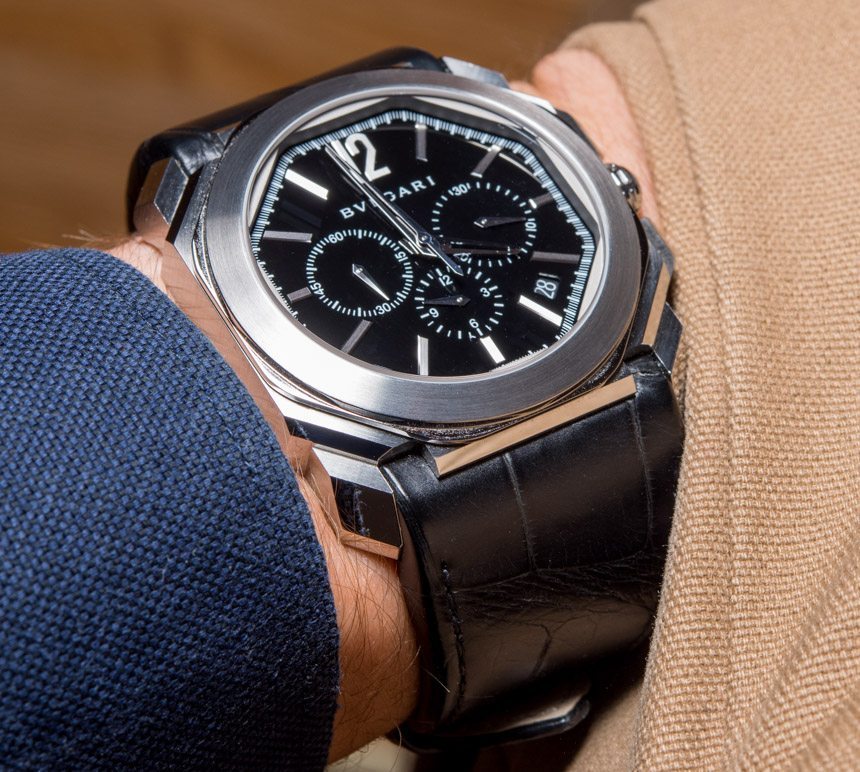 It would be very difficult – and also rather daft – to avoid comparing the Bulgari Octo to its brethren: the Audemars Piguet Royal Oak, another famous Genta design, and the quintessential luxury chronograph, the Rolex Daytona. The Bulgari Octo, just like the other two, is not perfect. But, also like them, it is unique, and it even has a few cards up its sleeve that can change the way this game plays out.

We’ll look inside its bowels and discuss its shortcomings soon, but let’s stick with aesthetics for a bit longer, as there is so much to be talked about. 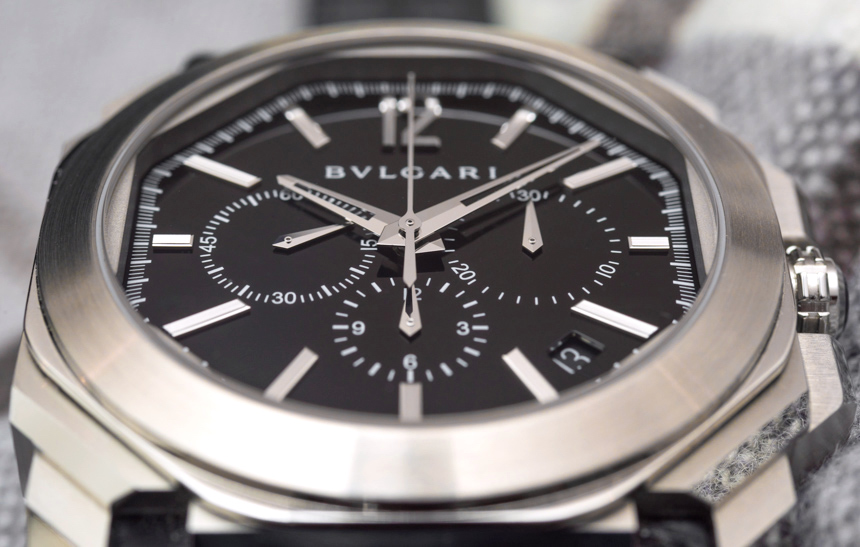 Of the three, the Bulgari Octo is far and away the most complex in its design. On an objective, quantifiable note, I’ll say that it has a total of 110 facets in its case and bezel – which certainly make it a real pain to hand-finish, but a true joy to scrutinize or even simply glance at. On a subjective note, I’ll say that I don’t think I have ever done a review where I have picked up the watch so often while writing the draft. Here, however, there were so many little details which I knew my eyes could sort of see and my mind subconsciously appreciate, but that hardly cuts it for a thorough review that is meant to tell you all you should know about its subject. 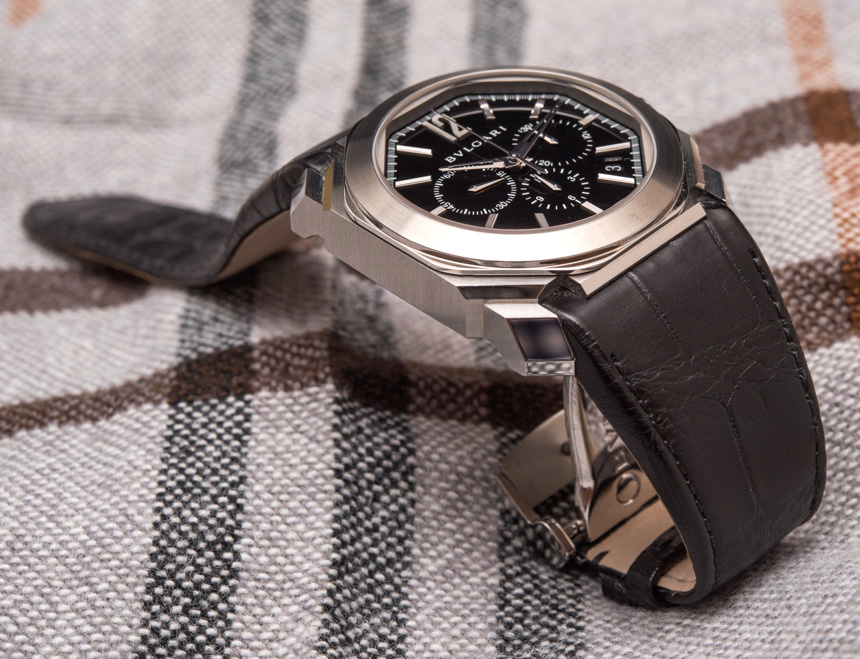 If you appreciate good design in cars, consumer products, or architecture, I see very little chance that you won’t find a way to enjoy the Octo. Complexity for complexity’s sake certainly is not always (or in fact scarcely ever) the way to go, but the Bulgari Octo bears the visible marks of a search for aesthetic balance and intelligent proportions. 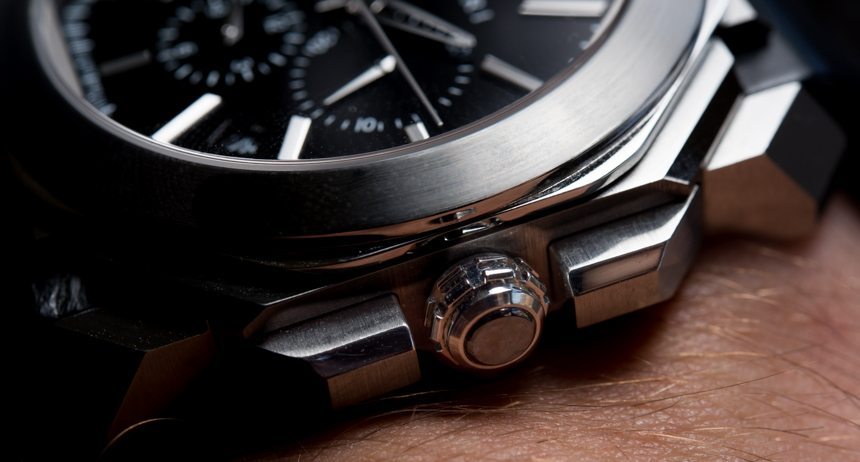 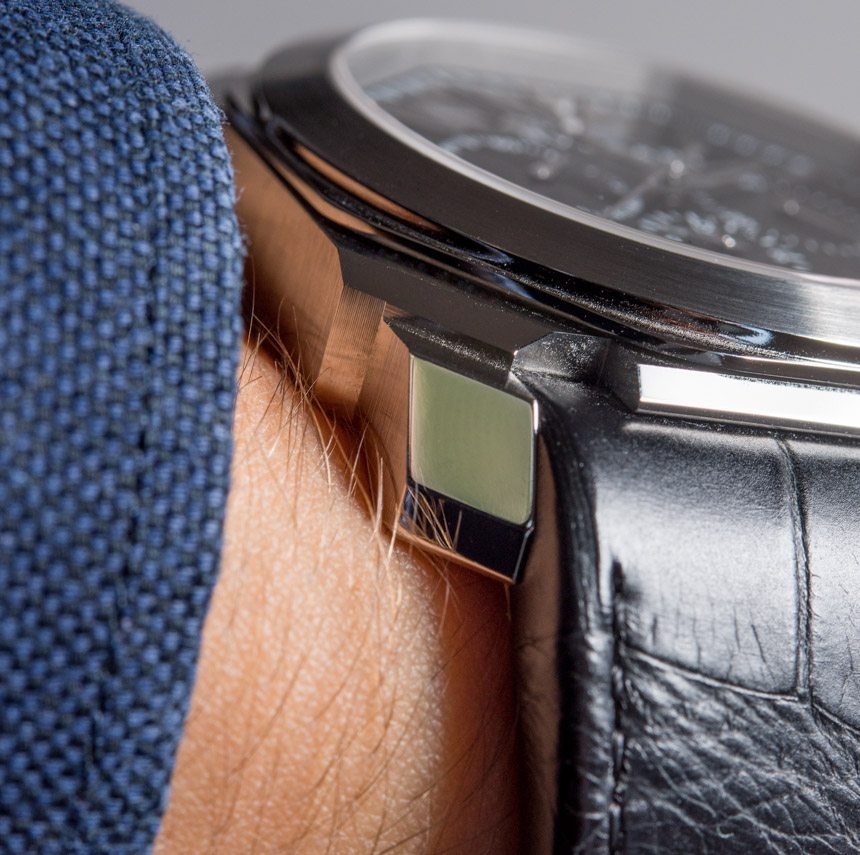 The most complicated part of the Bulgari Octo Velocissimo’s 41-millimeter-wide case is where the bezel and the lugs meet. From the lowest part of the lugs to the top of the bezel, there are a total of eight layers that flow through a mix of vertical drops, sloping curves, and steep angles. The plain, lightly brushed steel bezel, large, brushed profile elements, and polished lug facets render the Bulgari Octo Velocissimo complex and interesting, but – to my eyes, at least – never desperate for attention. 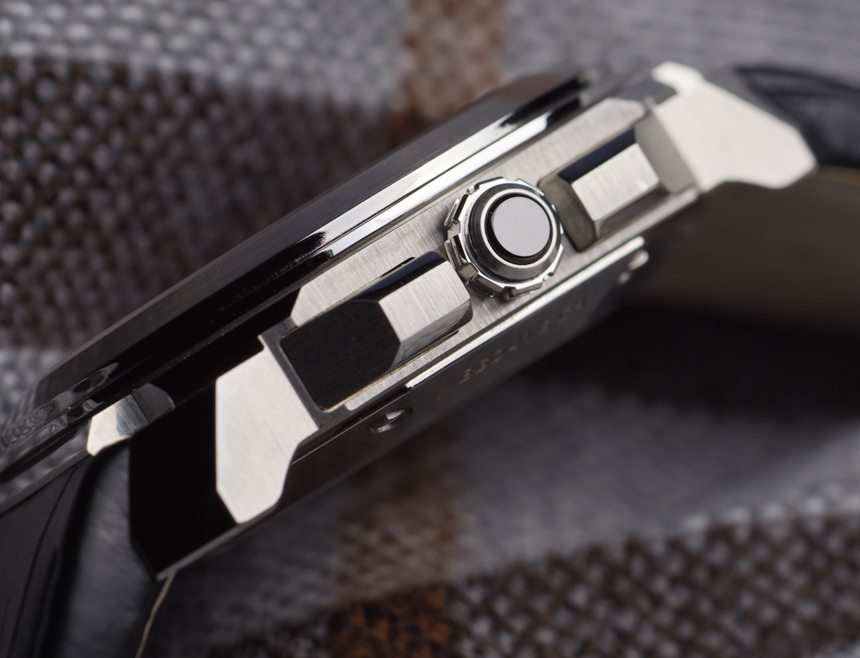 In all seriousness, though, the Octo’s design does not struggle with, but instead harnesses the three-dimensional nature of watches. While that may seem blatantly obvious at first, the levels to which this statement apply probably do not become apparent before a fair bit of time and a number of occasions have been dedicated to scrutinizing the case hands-on. 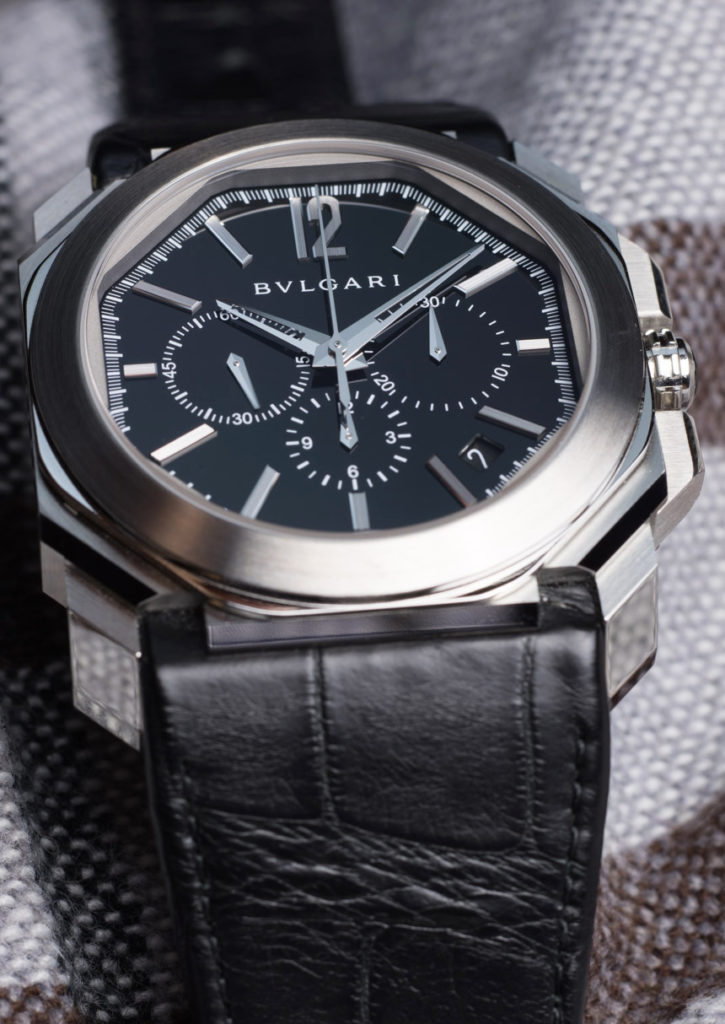 The general details of the Octo’s case are rather straightforward and imply little of its underlying complexity. Although it is a rather conservative 41 millimeters wide, it actually wears considerably larger, thanks to the blocky case sides and the also nicely integrated, but still rather massive crown and chronograph pushers. It is water resistant to 100 meters – that is the same as the Rolex Daytona but, ironically, it is double of the Audemars Piguet Royal Oak Chronograph’s 50-meter rating. Also, the Royal Oak has both screw-down pushers and crown, while the Bulgari Octo Velocissimo Chronograph has to make do with the latter only. 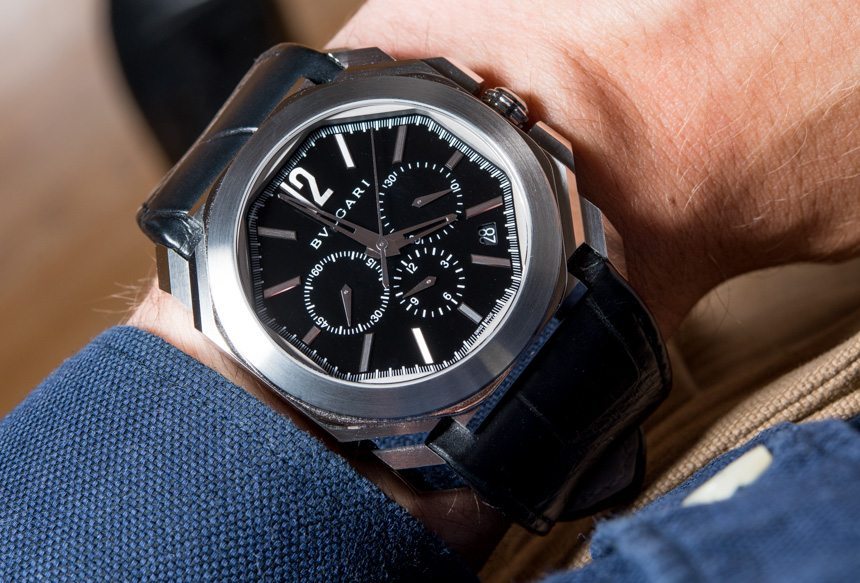 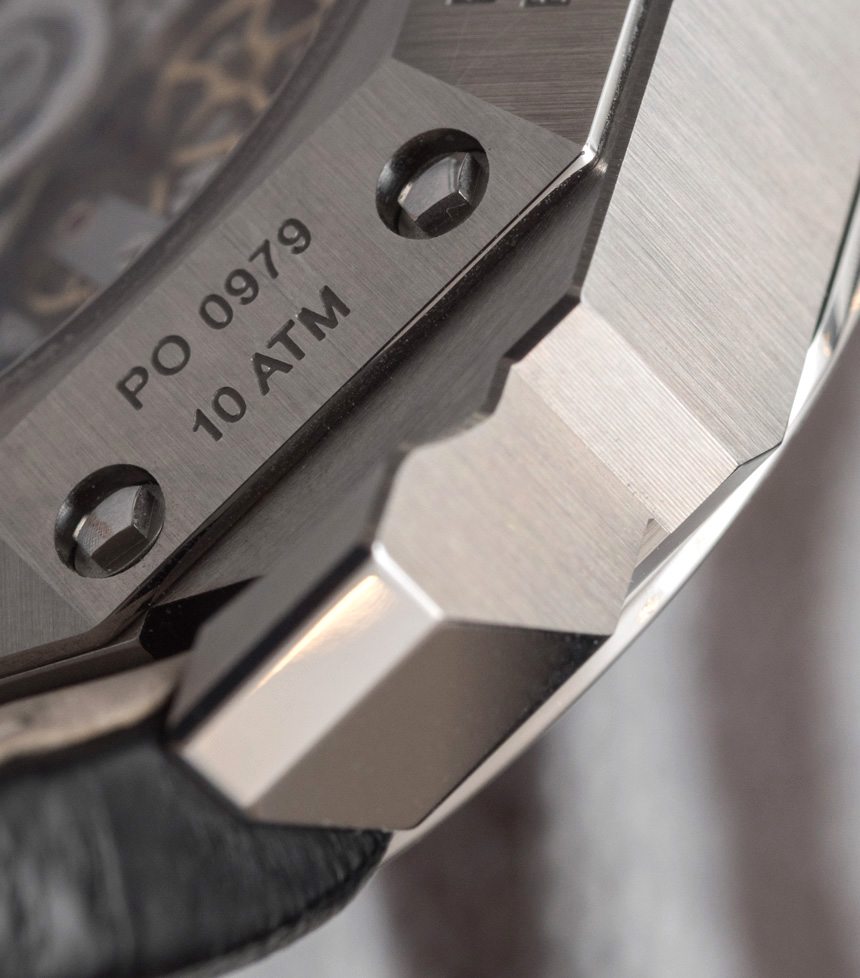 The 100-meter water resistance rating should give you peace of mind if you take the Bulgari Octo Velocissimo for a swim (on the steel bracelet and not the leather strap, of course), and yet you don’t have to sacrifice the open caseback either. Secured with eight pentagonal screws, the back features an amply sized sapphire window that allows for a close look at the entire width of the Zenith El Primero caliber – but more on that later. 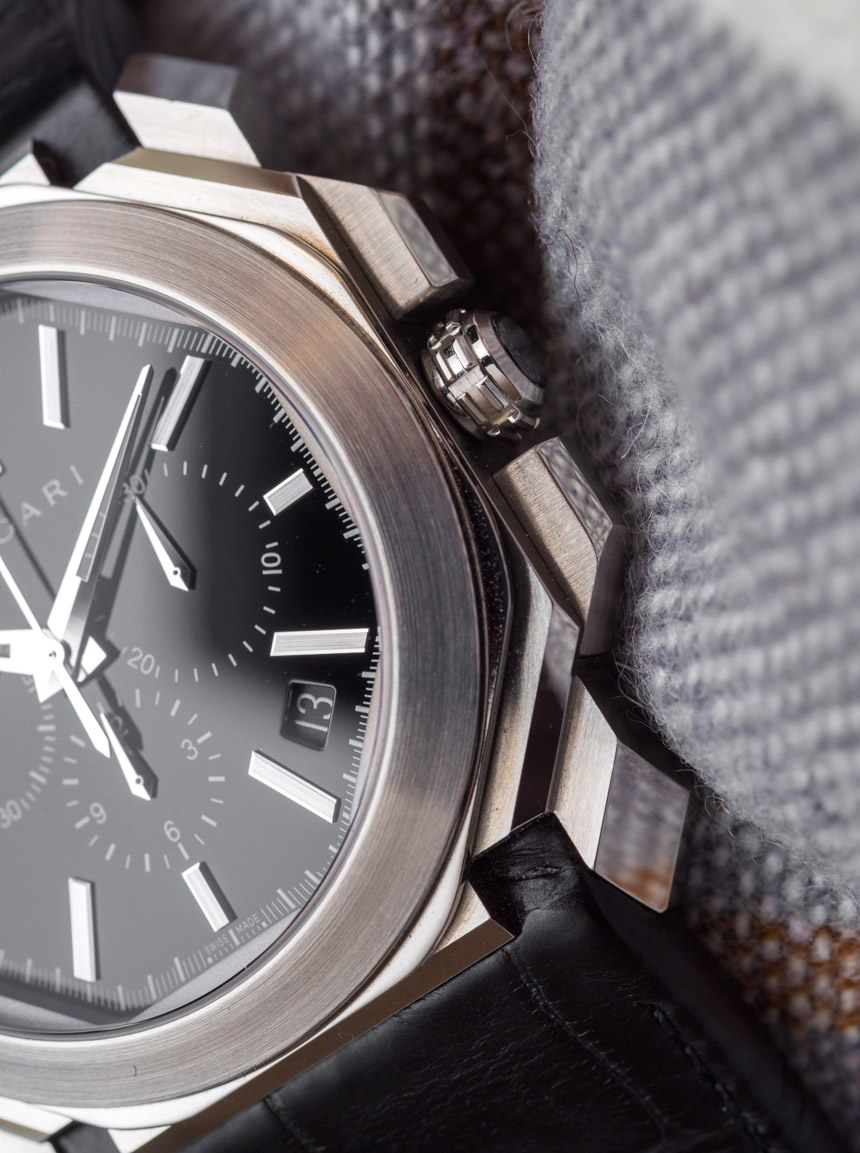 For an element that testifies to just how thoughtfully designed and complex the Bulgari Octo’s case is, please turn your attention to the large, angled, polished facet that can be found on all four lugs. It appears to be a simple cutoff with a shiny finishing on it – in reality, though, there is so much more going on. It is difficult to explain, but the images here should illustrate well enough how this little design treat is special. In essence, a tweak as simple as having the lower two corners aligned but the top two corners on separate planes from one another creates a fascinating additional layer of visual complexity – something the eye imminently captures but the mind cannot immediately separate from the rest of the elements. 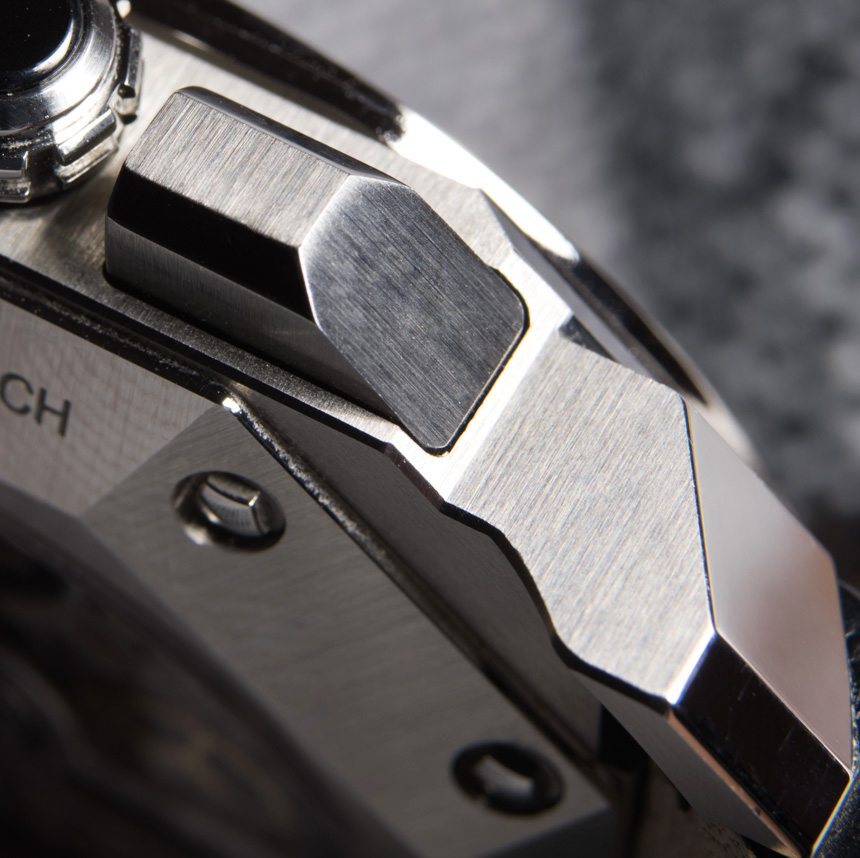 Like this facet, the lower, shorter, vertical part of the lug has also been polished, while its side and top are brushed. The flat top of the lug is then followed by a super thin, brushed vertical layer; then by a polished, angled facet; next comes a brushed flat surface; and only after these comes the bezel, which has a flat, polished, octagonal frame and edges, with a brushed top. It sure is a mouthful to describe all this, but to hand-finish, well, that is where the real challenge lies. 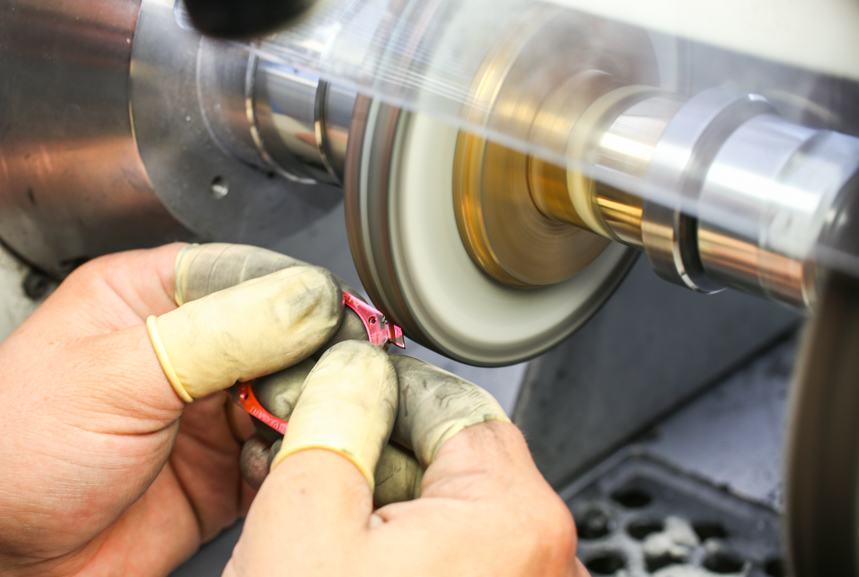 An Octo case, bearing a red protective layer on some of its surfaces, is being hand-polished in Bulgari’s case manufacture

Even the chronograph pushers have two polished and beveled edges, while the notched crown is shiny on all its surfaces. A black ceramic cabochon completes the look and breaks the steel’s silver colored dominance. The crown, as I mentioned, has to be screwed down before it can be used to adjust the movement, while the two pushers sit nicely and firmly in the case, with a minimal vertical play to them. 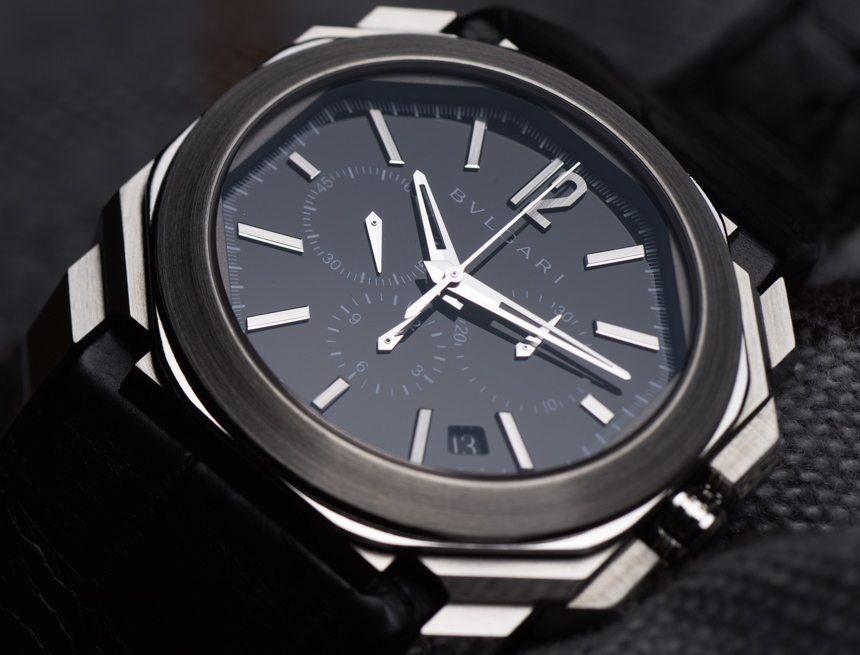 The case’s complicated aesthetics take the eye some time getting used to. I do not remember ever finding it to be overwhelming, not even when I first tried an Octo on a few years ago. The overall impression when looking at the watch from head on is of a timepiece of smart design and fantastic proportions. Nothing is too small or too large anywhere on it – even as obscure little things as the caseback’s sapphire window appears to be beautifully proportionate to all the other components. Everything just looks more like a result of engineering than the outcome of fashion-inspired design (which is subjective – but, subjectively speaking, this attribute is very much to my liking). 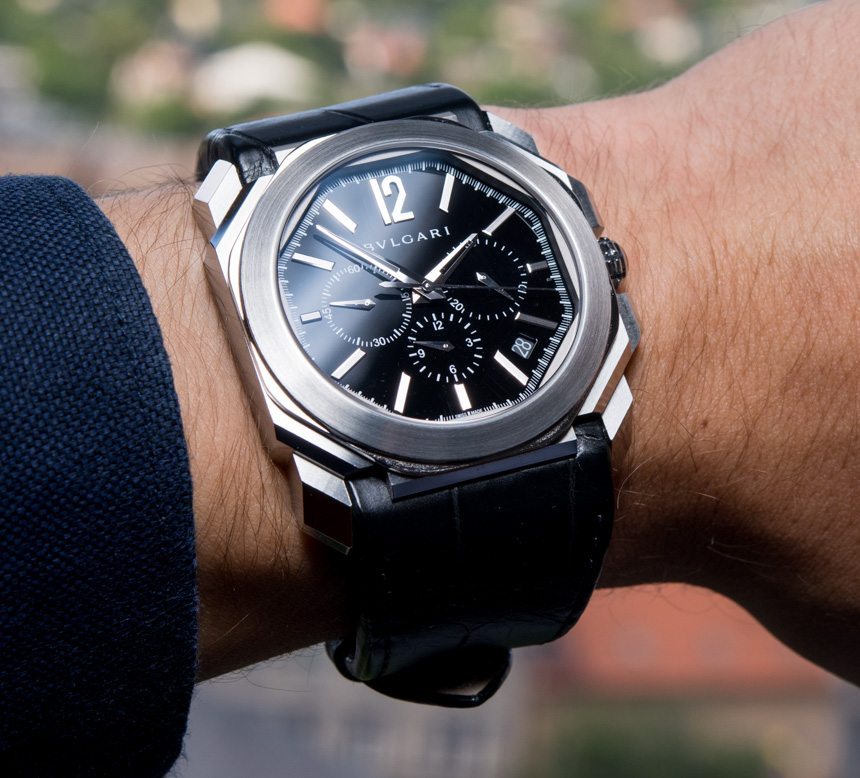 I understand that I have been going on about the cool details of the Octo case, and yet I feel there still is so much more that could be said about it. What has to be seen – and probably a hands-on look will help better appreciate this fact – is that while the Bulgari Octo Velocissimo is dripping with confidence and masculinity, thanks to its 41-millimeter diameter, it does not come across as something blingy or as “men’s jewelry that’s trying too hard.” 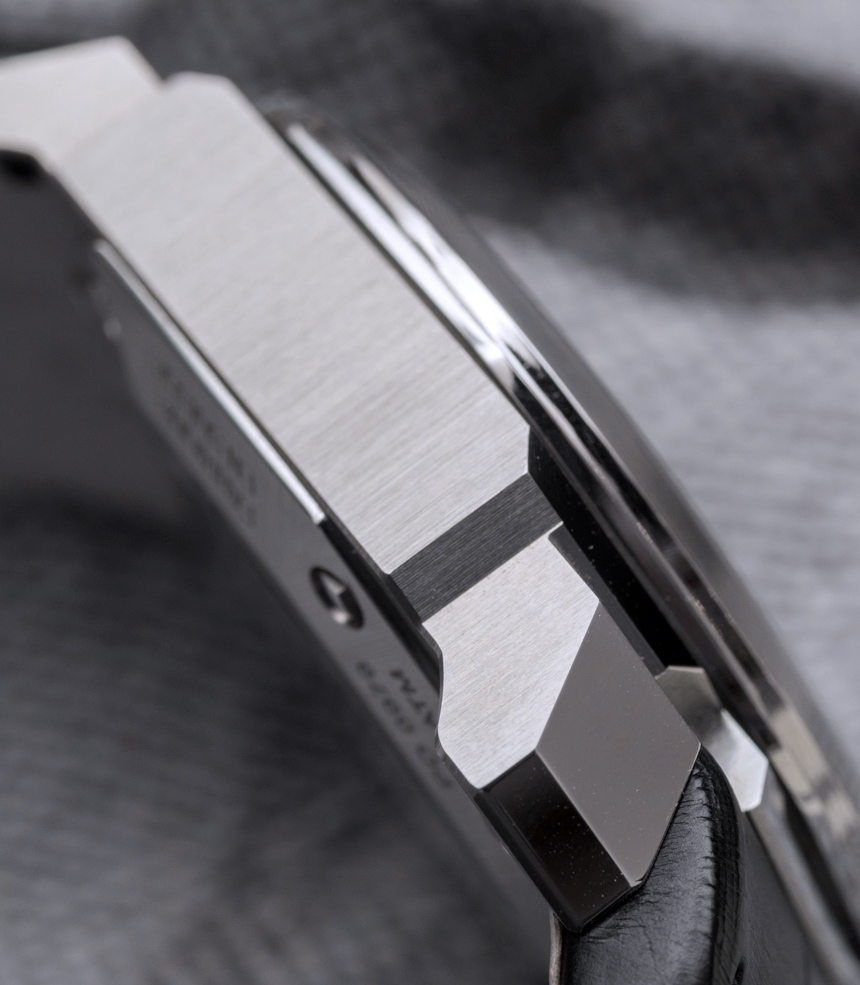 My genuine appreciation for the Octo’s case (that I am still in the process of further developing, even after a few months of wearing this watch in rotation with a couple others) brings me to the part that I can criticize most harshly: the strap. Despite its very impressive integration between these tricky-looking lugs and protruding case elements, I find that this strap still fails to perfectly complement the case – instead, it sort of dwarves it, aesthetically. In short, to my eyes, the strap appears to be too wide and too thick near where it meets the lugs.

This, as I see it, creates two issues. For one, it makes the case appear to be relatively smaller than it would need to be – even though it actually is pretty much the perfect size, as I mentioned above – and second, it makes the whole thing look more like a watch-equipped leather strap than a strap-equipped watch. 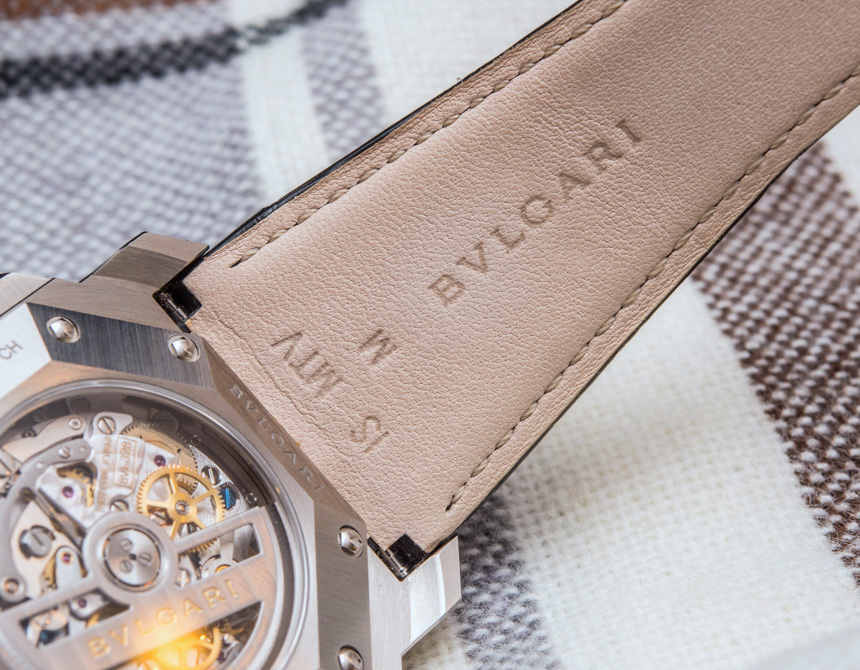 Don’t get me wrong, this Bulgari black alligator strap is super comfortable and of course is of expectedly high quality. The friction-fit folding clasp lacks any pushpieces and is also very nicely executed: the clasp has a very deep sheen to it with sharp, engraved Bulgari branding on the outside, a satin finished area, and Bulgari logo between two polished frames on the inside. Its slim construction further enhances wearing comfort – so if you do like the looks, there should be nothing to hold you back from getting the Bulgari Octo Velocissimo on the strap. 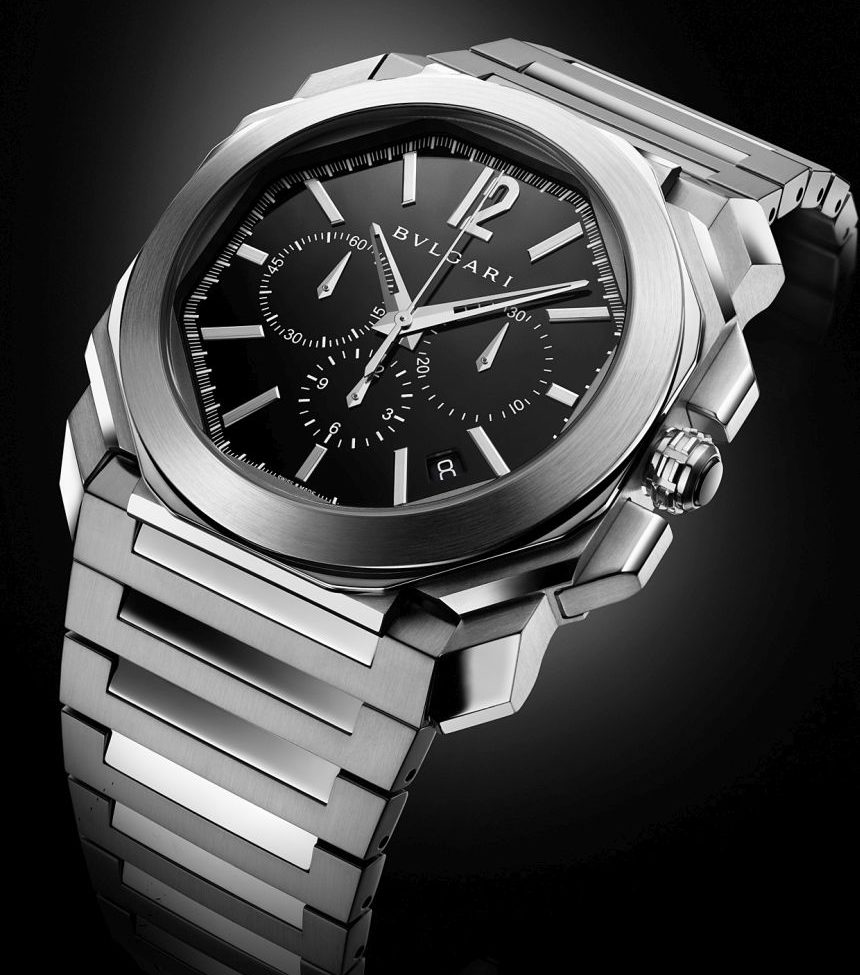 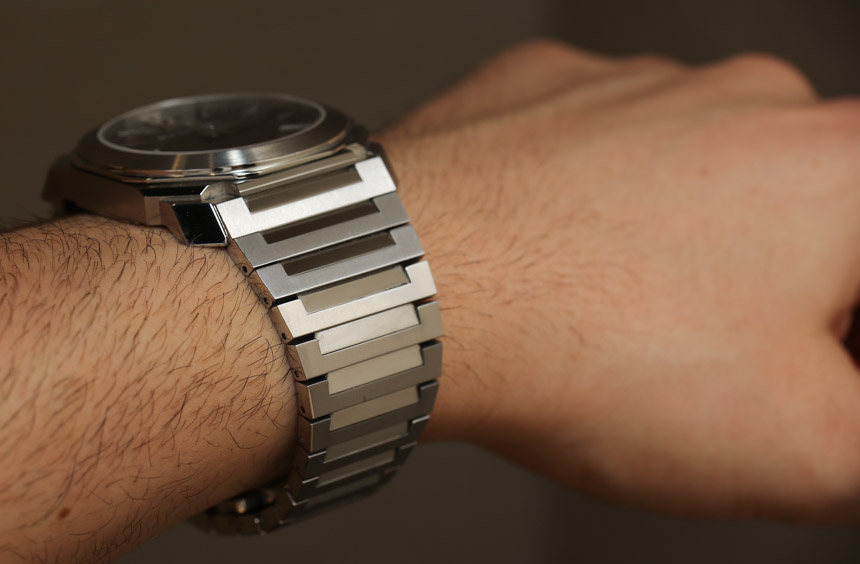 Fortunately, however, there is also an alternative solution to the strap. Bulgari offers this Octo Velocissimo – and all the other, non-high-complication or high-jewelry versions of the Octo – on a steel or two-tone steel and gold bracelet. Now, while the bracelet looks rather wide thanks to its long and thin links near where it meets the lugs, it does a fantastic job at completing the case’s aesthetics. Notably, Bulgari also makes and hand-finishes a lot of their own bracelets, and the one on the Bulgari Octo Velocissimo Chronograph is no exception to that, so you still get a fully in-house case and bracelet – with fantastic finishing all around.