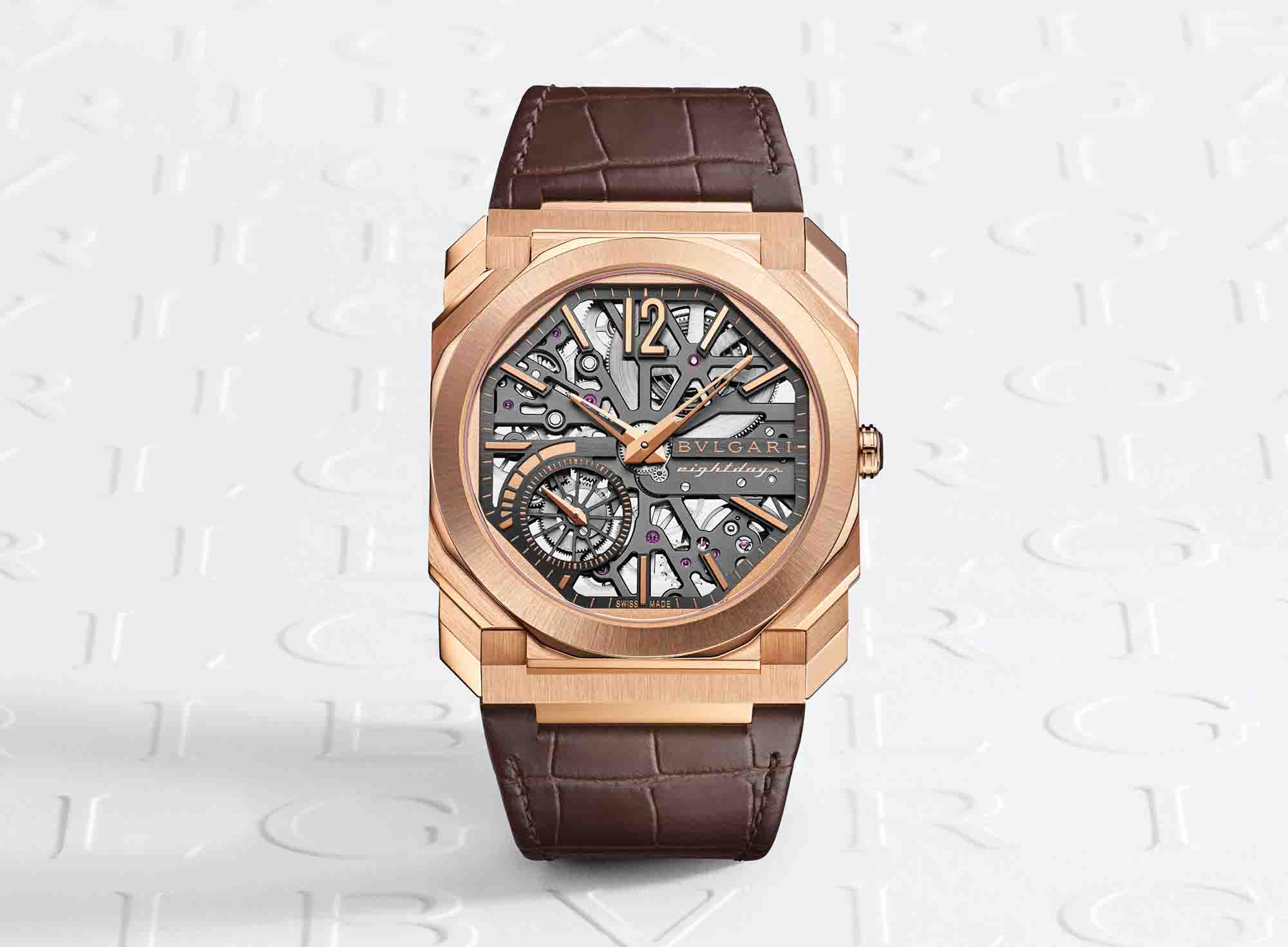 Although the modern Octo collection has only been around for a single decade, it has quickly become one of the designs most emblematic of Bulgari as a brand. While the core concept behind the Octo range can trace its roots back to legendary watch designer Gerald Genta and his eponymous company during the 1980s, the Bulgari Octo collection as we know it today only made its debut appearance in 2012, with the ultra-thin Octo Finissimo joining the lineup two years later in 2014. In just a handful of years, the Bulgari Octo Finissimo collection has claimed a number of different world records for its ultra-thin approach to watchmaking, and to celebrate the 10th anniversary of the modern Octo range, Bulgari has launched several new models based on the collection’s signature aesthetic, including the Bulgari Octo Finissimo Skeleton 8 Days watch in solid 18k pink gold. 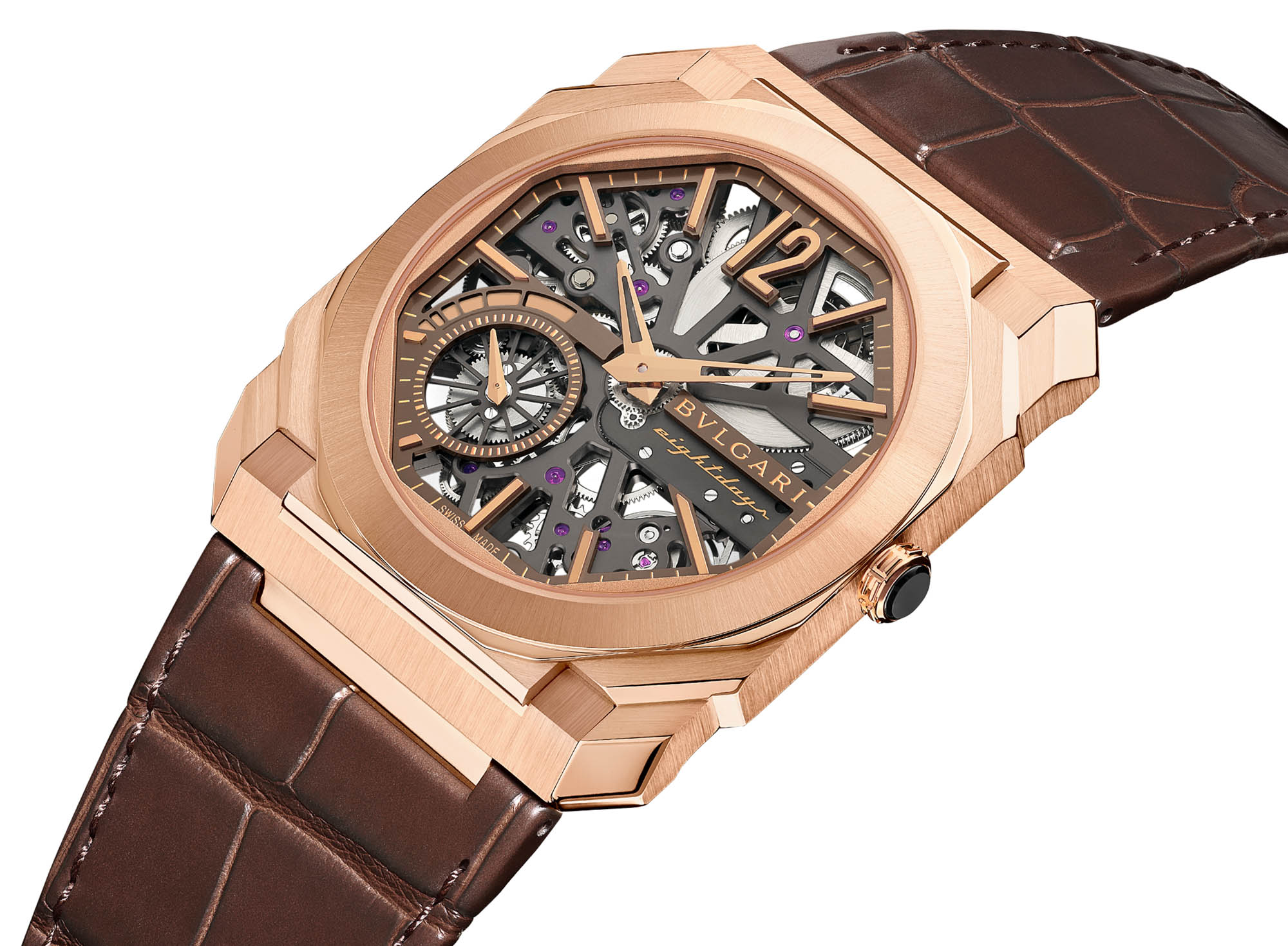 All Bulgari Octo watches are united by their Genta-designed cases, which feature an angular octagonal shape that creates a striking contrast against their rounded fixed bezels. The satin-polished 18k pink gold case of the Bulgari Octo Finissimo Skeleton 8 Days follows the same signature design as the rest of the collection, and it measures 40mm in diameter by just 5.95mm-thick. Part of how Bulgari is able to achieve the Octo Finissimo’s ultra-thin profile is by omitting a traditional caseback altogether, and instead having a sapphire display window set directly into the reverse side of the case itself. Rather than opening up from the back like most watches, the movement of the Bulgari Octo Finissimo is inserted from the front, and it is ultimately the bezel of the watch that is responsible for sealing the case. Securing the bezel are eight hidden screws located on the back side of the Octo Finissimo that run through the middle case and screw into the bottom of the bezel for maximum structural integrity and to create a completely seamless overall aesthetic. A second sapphire crystal protects the dial and hands, while a winding crown located at the 3 o’clock position offers access to the movement and features a black ceramic disc for added visual contrast. Given its ultra-thin construction, water resistance is limited to 30 meters, and the watch itself is completed by a dark-brown alligator leather strap that is fitted with a matching 18k rose gold pin buckle.

Like most watches with heavily open-worked designs, the Bulgari Octo Finissimo Skeleton 8 Days doesn’t feature a dial in the traditional sense of the word but rather a highly skeletonized structure that sits on top of the movement and houses all of the necessary dial markings. On the Octo Finissimo Skeleton 8 Days, a large Arabic “12” sits at the top of the dial, while the rest of the hour markers are indicated by thin pink gold batons. At the 7:30 location is a running seconds subdial with an arc-shaped power reserve indicator discreetly placed above it. A pair of centrally mounted skeletonized hands in matching pink gold display the hours and minutes, while the “Bvlgari Eight Days” signature appears at the 3 o’clock location. Although the skeletonized dial structure appears in a rich brown color with matching rose gold accents, it is actually the internal movement of the Octo Finissimo Skeleton 8 Days that takes up the most visual real estate, with its sand-blasted anthracite bridges visible through both the front and back of the watch. 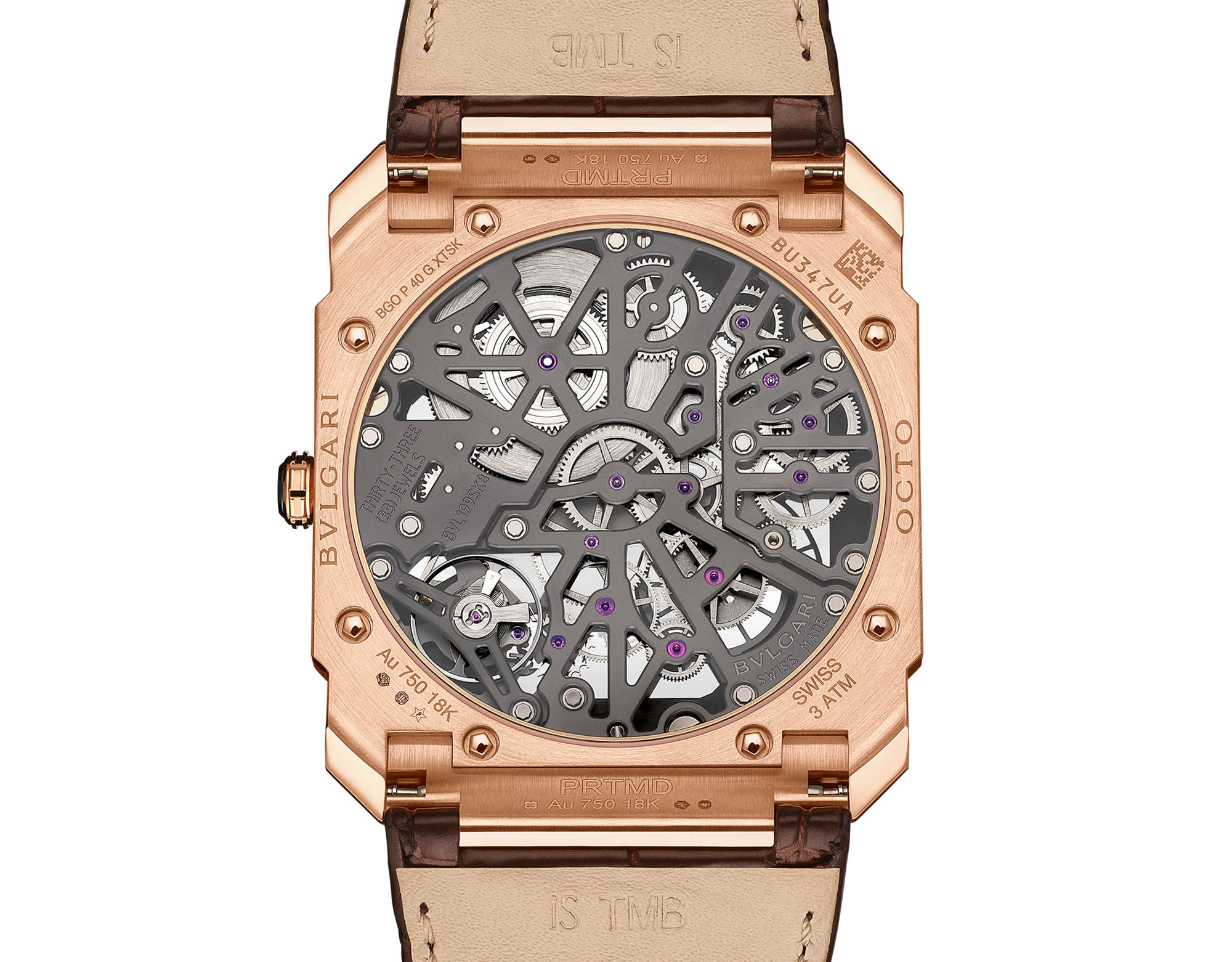 Powering the Bulgari Octo Finissimo Skeleton 8 Days watch is the in-house Caliber BVL 199 SK movement, which offers an ultra-thin design and runs at a fairly standard frequency of 21,600vph. Manually wound and offering users an impressive 8-day power reserve (192 hours), the Cal. BVL 199 SK is a completely new in-house movement from Bulgari, and it features a highly architectural design with open-worked bridges that are finished with a dark anthracite PVD treatment. A decent number of other luxury watch brands have been coming out with new movements that feature longer power reserves; however, what is most impressive about the new Bulgari Caliber BVL 199 SK is that it is able to offer a whopping eight days of autonomy while still managing to measure 36.6mm in diameter by just 2.5mm-thick. 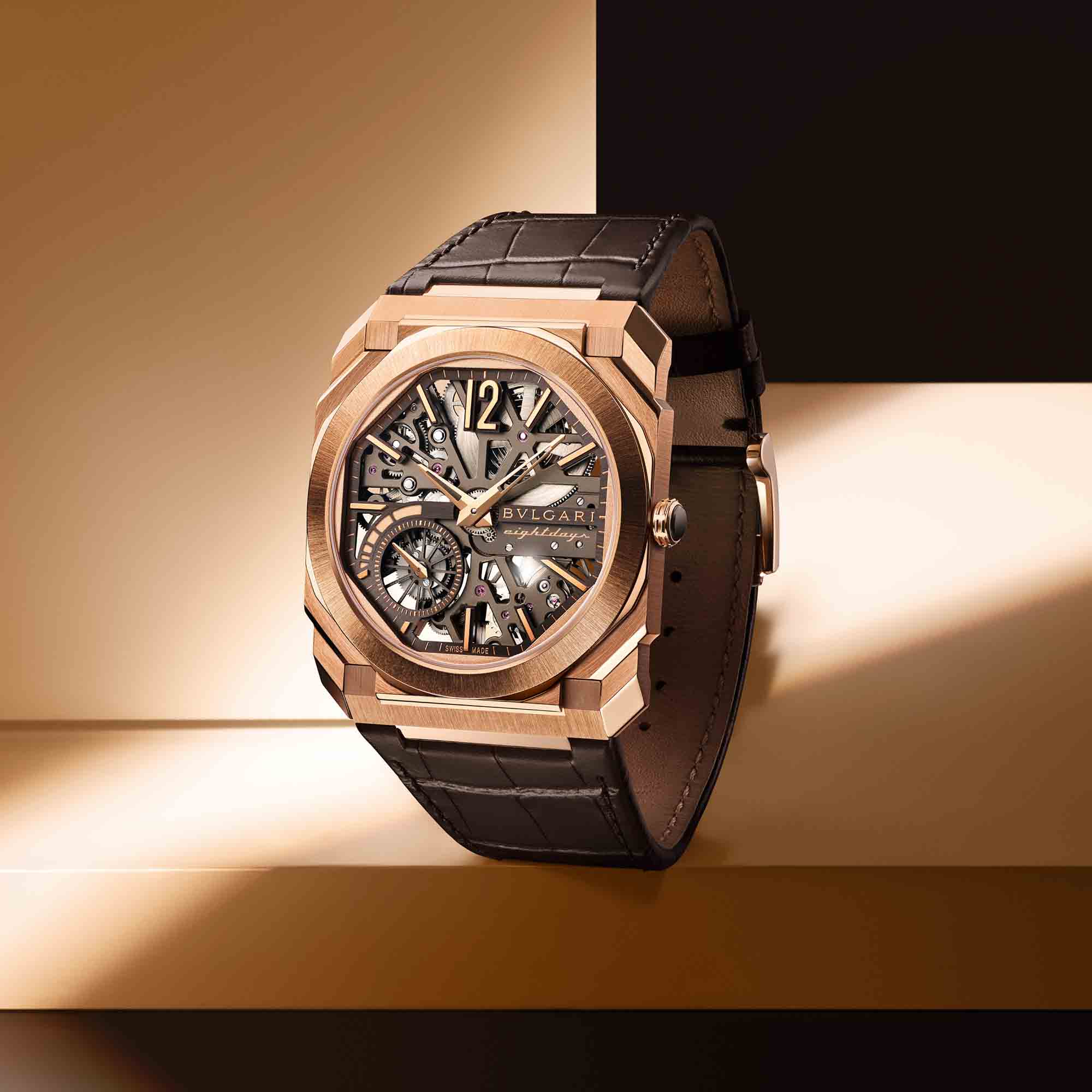 Bold and angular, yet inherently refined and elegant, the Bulgari Octo range has quickly become one of the brand’s signature designs, and it offers an instantly recognizable aesthetic that doesn’t quite look like anything else within the industry. When Bulgari purchased the Gerald Genta watch brand back in 2000, the design of the Octo was included in the acquisition. Less than ten years after its relaunch, the Octo has become one of Bulgari’s most famous and successful models, and it has served as the foundation for countless different variations that span everything from understated time-only models to record-breaking ultra-thin complication pieces. With an official retail price of $37,300 USD, the Bulgari Octo Finissimo Skeleton 8 Days is certainly among the more premium options currently available, although it is hardly the most expensive version of the Octo that has made an appearance within the last decade. Additionally, given that it features a solid 18k pink gold case and an advanced in-house skeletonized movement, a premium price point simply makes sense, and the watch offers a highly luxurious take on what is rapidly becoming Bulgari’s signature model. For more information, please visit the brand’s website.