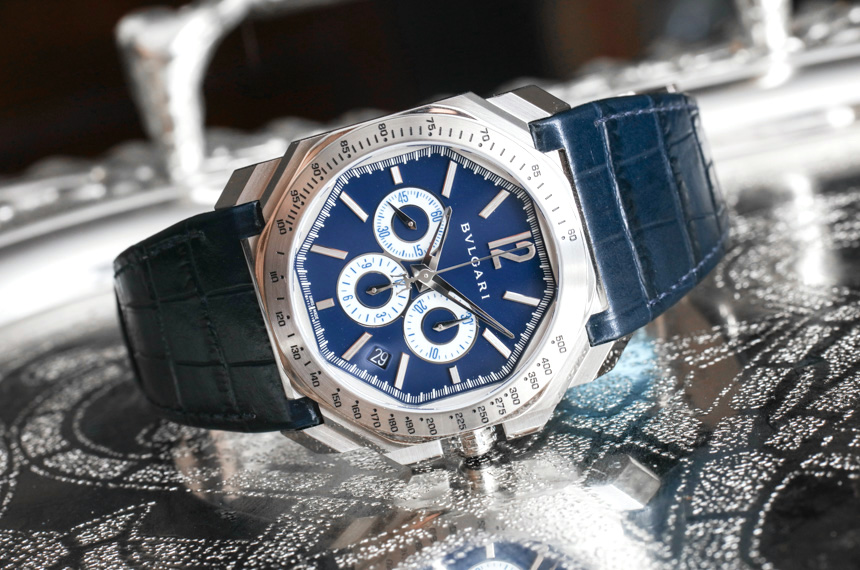 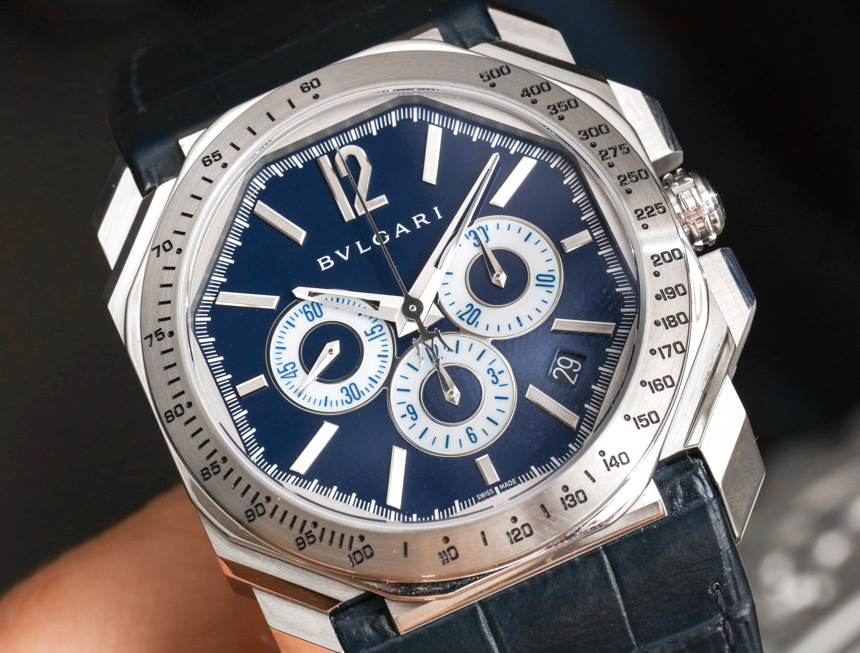 Cars and watches have a lot in common, so it is little wonder that tie-ins between the two worlds are so popular. Watchmakers and automakers have collaborated for quite a while now. Rolex is active in Formula 1, Chopard has its connections with the famous Mille Miglia, and the partnership between Hublot and Ferrari is now into its sixth year with no signs of slowing down – to name a few. The union that we are interested in today is between Bulgari and Maserati, and the watch in question is the very sublime Bulgari Octo Maserati Chronograph. As far as automotive-themed watches go, it is easily one of the better-executed and more considered ones. Let’s have a closer look at it now. 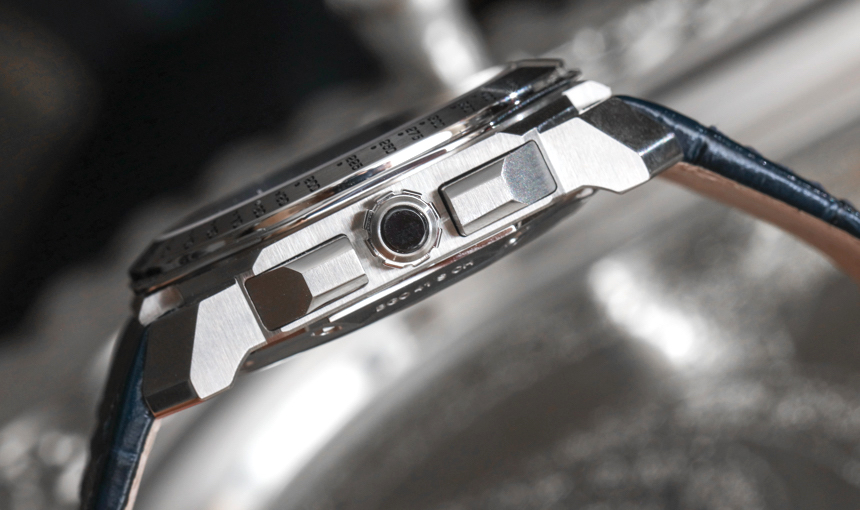 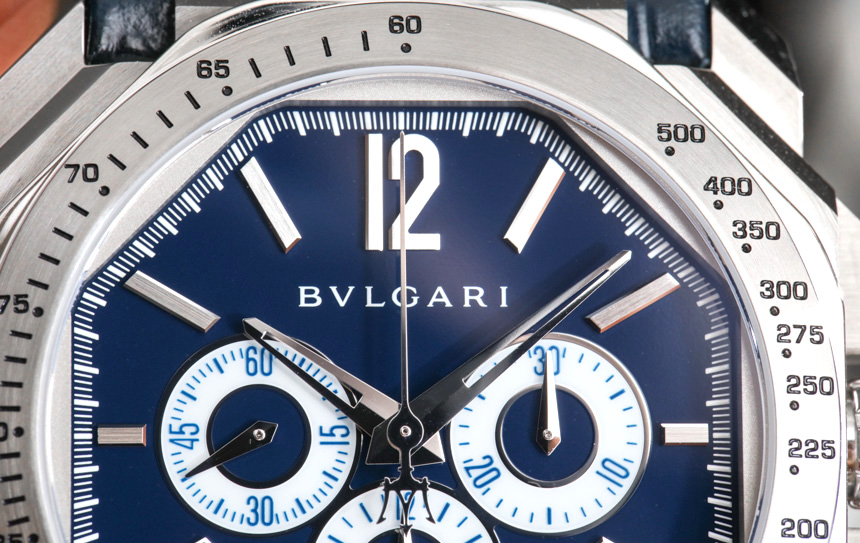 Before we dive into the Bulgari Octo Maserati Chronograph, it is important to know the watch on which it is based, and that’s the Octo Velocissimo Chronograph (reviewed here). Bulgari’s (and original designer of the Octo watch Gerald Genta’s) obsession with the octagon should be widely known by now, and its Octo collection has grown over the past couple of years to include numerous ground-breaking and record-breaking models such as the Octo Finissimo Minute Repeater (hands-on) and Octo Finissimo Tourbillon Skeleton (hands-on). 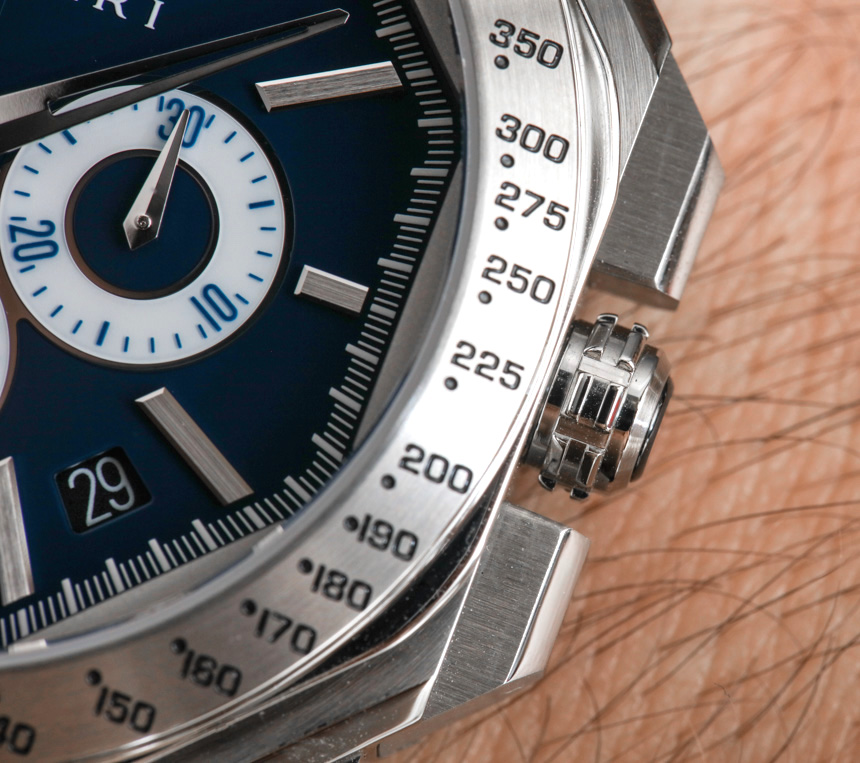 The Octo collection, and by extension, the Octo Velocissimo Chronograph have a wonderfully angular case design. It is a play on the octagon and it is really an impressively complex case, featuring numerous surfaces with different treatments. According to Bulgari, the Octo case features over 100 surfaces, making it far more intricate than your typical high-end luxury Swiss watch case. 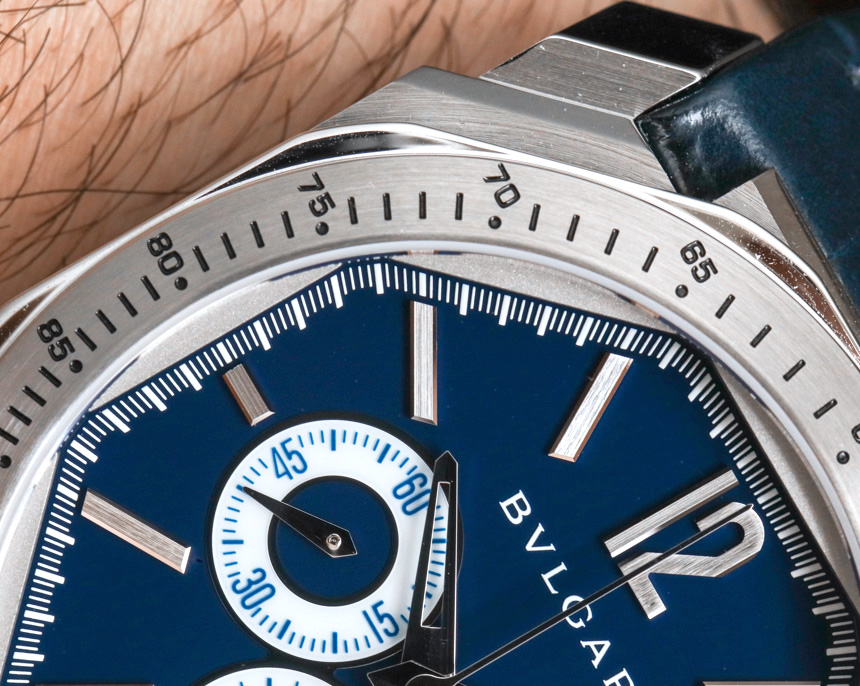 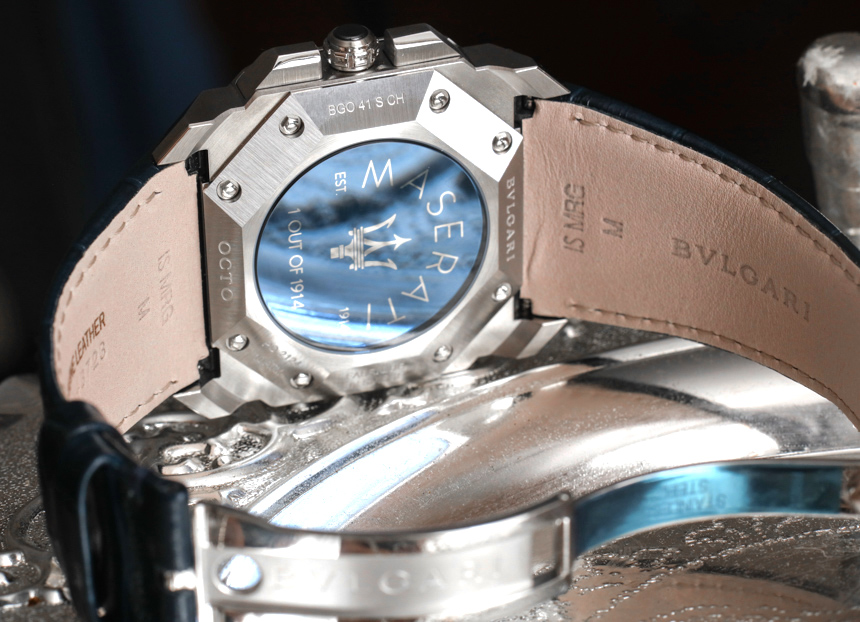 Velocissimo is Italian for “fast,” and it gets its name from the movement within. It is powered by the BVL 328, which is based on Zenith’s fast-beating El Primero chronograph movement. The El Primero, if you recall, beats at a heady 5Hz, or 10 beats per second. But despite the complex Octo case and exotic 5Hz movement within, the Bulgari Octo Velocissimo Chronograph has always felt a little cold and sterile to me. The case is available in numerous materials, but the dial is only available in black, or in the case of the rose gold model, chocolate brown. I would describe the Bulgari Octo Velocissimo Chronograph as elegant, but certainly not exciting, at least not as exciting as it could have been with some tweaks. The Bulgari Octo Maserati Chronograph watch changes that. 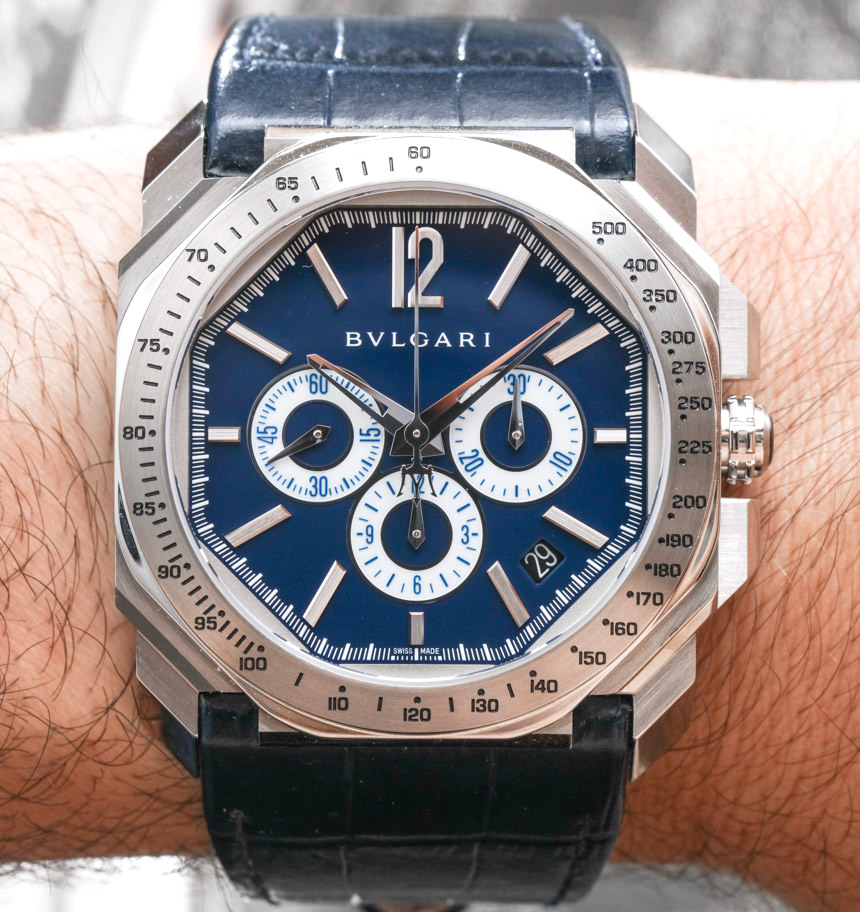 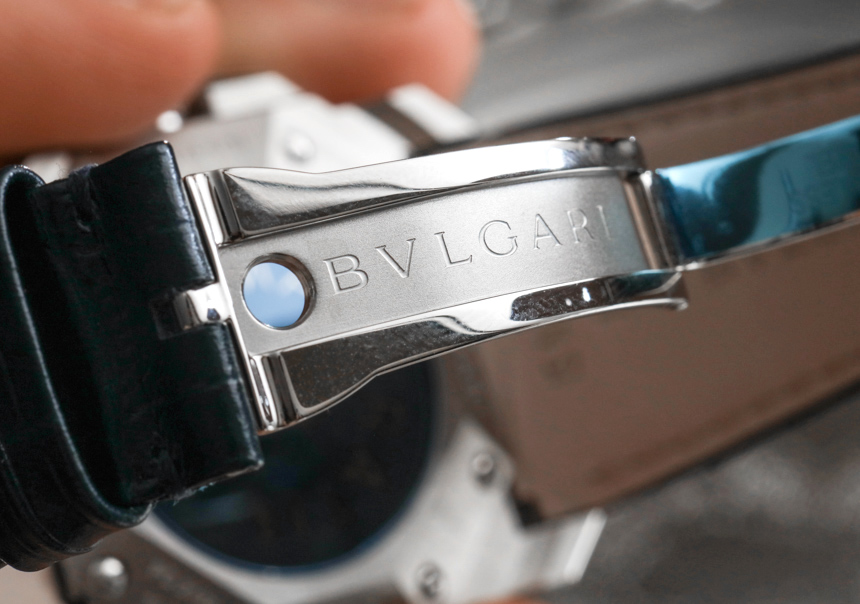 Launched in 2014, the Bulgari Octo Maserati Chronograph is a special limited-edition piece designed to commemorate the 100th anniversary of Maserati. Like the Octo Velocissimo Chronograph on which it is based, the Bulgari Octo Maserati Chronograph comes in a 41mm-wide case. The case material is stainless steel. It retains the intricate and complex design of Bulgari’s Octo cases, but the bezel in this model features a tachymeter scale, which is appropriate for a watch with automotive connections. It also makes me wonder why the non-limited edition Octo Velocissimo Chronograph watches do not have tachymeter scales on their bezels. I get it that tachymeter scales are mostly decorative these days and that very few people actually make use of them, but it just makes the watch look more “right.” 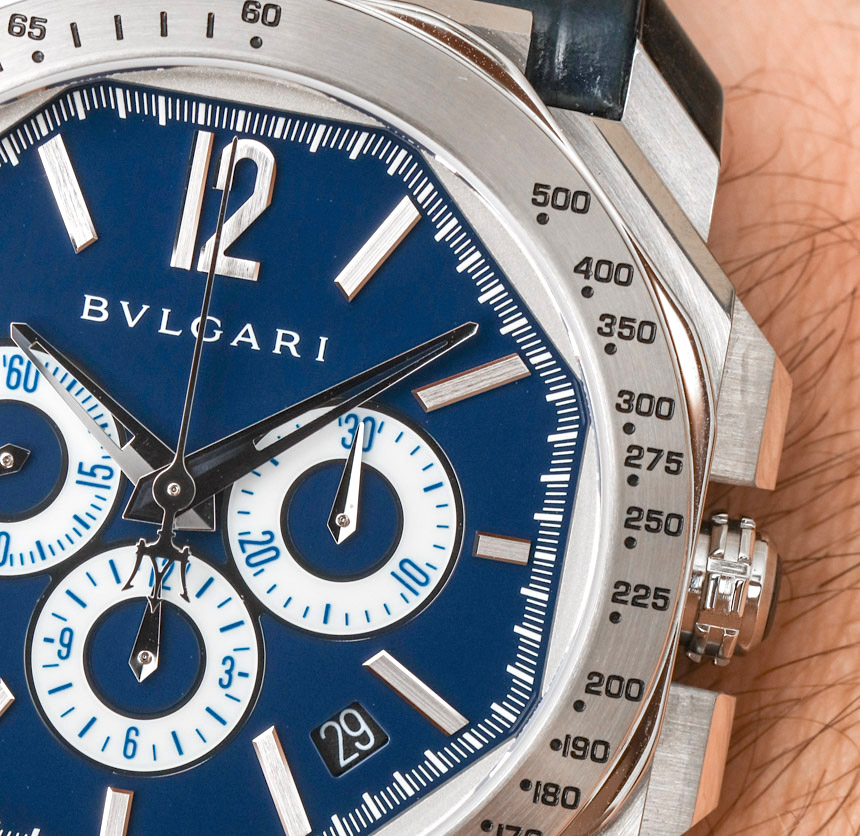 One of my favorite parts of chronographs in the Octo collection and also the Bulgari Octo Maserati Chronograph are the pushers. The pushers are cleverly integrated into the case just above and below the crown, which, by the way, is inlaid with ceramic. If you don’t look closely, you would probably mistake the pushers for crown guards. Water resistance is an adequate 100 meters. 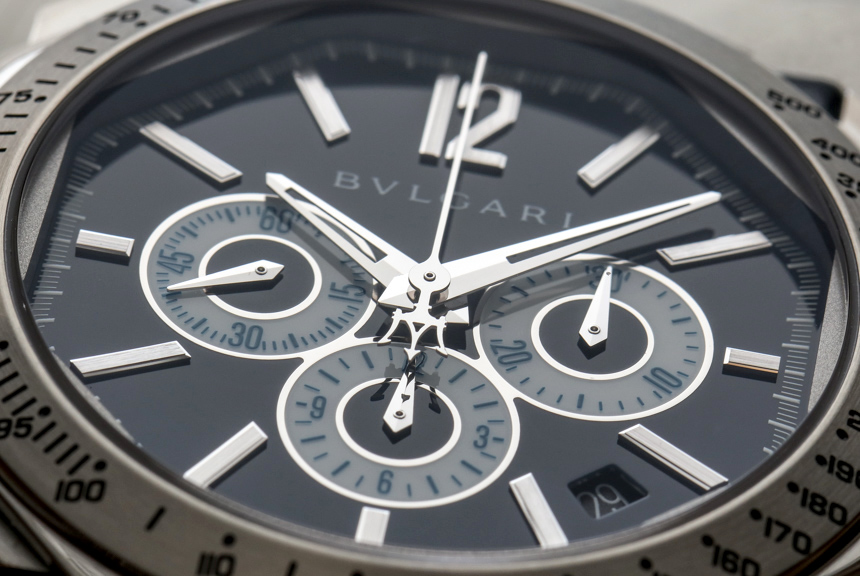 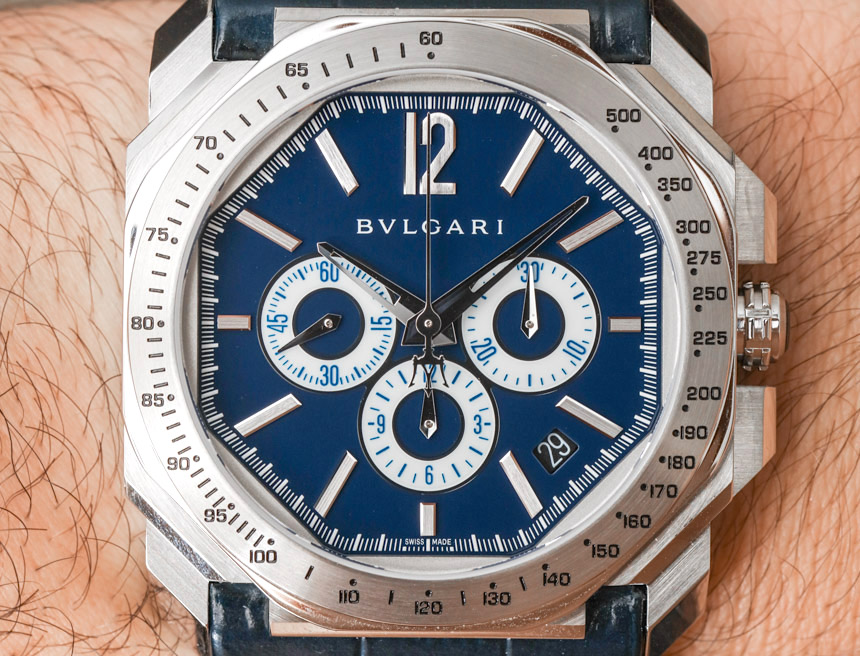 What immediately grabs your attention with the Bulgari Octo Maserati Chronograph is its dial. In place of white, we have a rich blue lacquer dial that, along with the polished stainless steel case, reminds of a white Maserati MC12 – which, if I’m not mistaken, remains the fastest and most powerful production Maserati even to this day. Blue also happens to be the traditional color of Maserati. 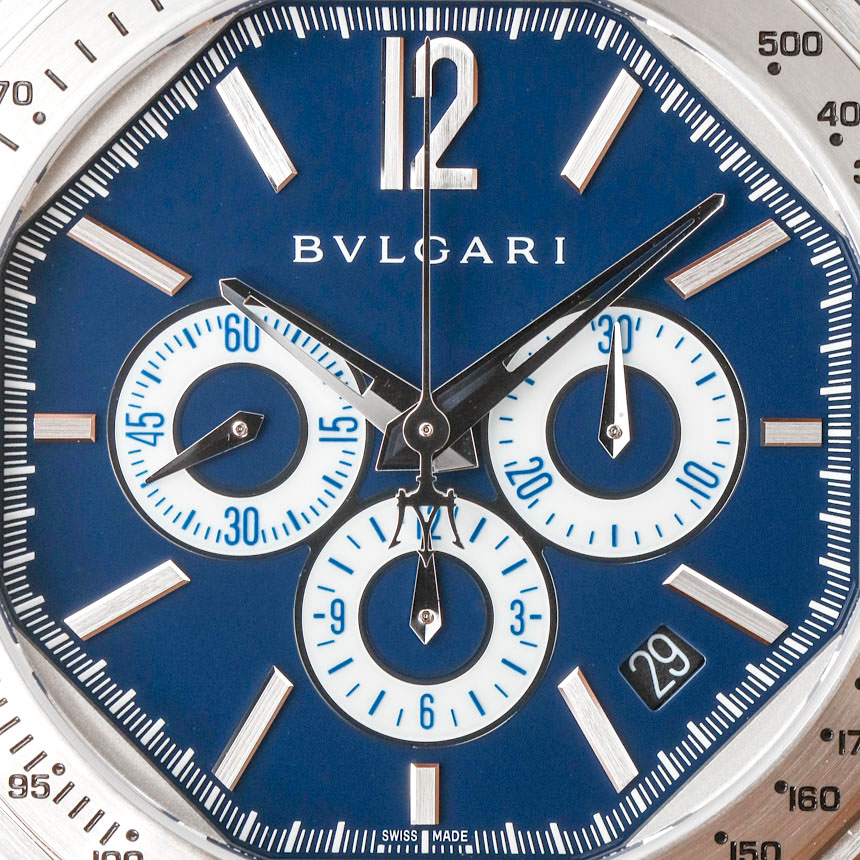 The dial has many other notable elements. The applied indexes are rectangular and have beveled edges that glint brightly under direct light. The main hour and minute hands are partially skeletonized as well and are angled to improve legibility. A neat thing here is the central chronograph second hand, which features the iconic Maserati Trident as its counterweight. It is a subtle and very well-considered approach to reminding wearers of the watch’s connection to Maserati. This one of the cool things about the watch: there’s no obnoxious or blatant Maserati branding anywhere else on the dial – just the simple Trident counterweight suffices. 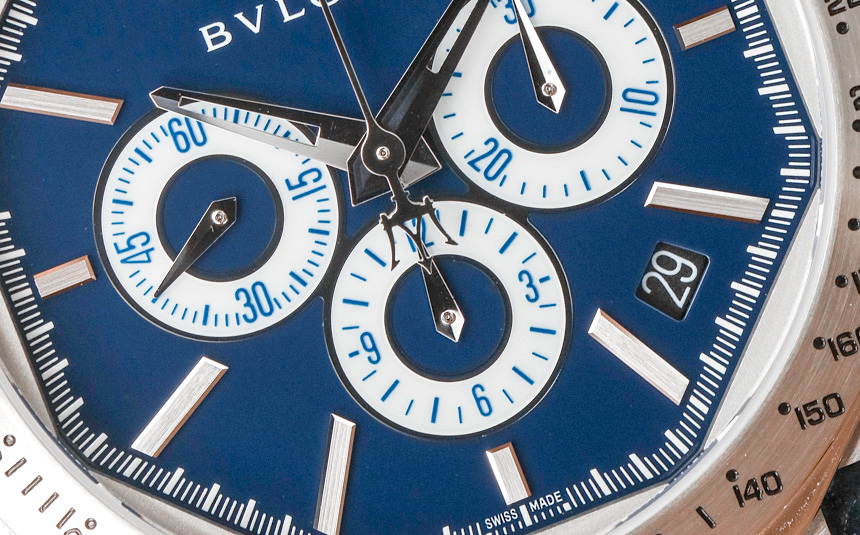 Something aesthetically pleasing about the dial is the three white enamel registers, which are set in place using a process called champlevé enameling. It is said to be a time-consuming process. In this case, the dial has to be prepared by carving and etching, filled with enamel, and then fired. But more importantly, it provides contrast against the blue lacquer dial and just looks great. There’s also a date window between four and five o’clock, which is unobtrusive. 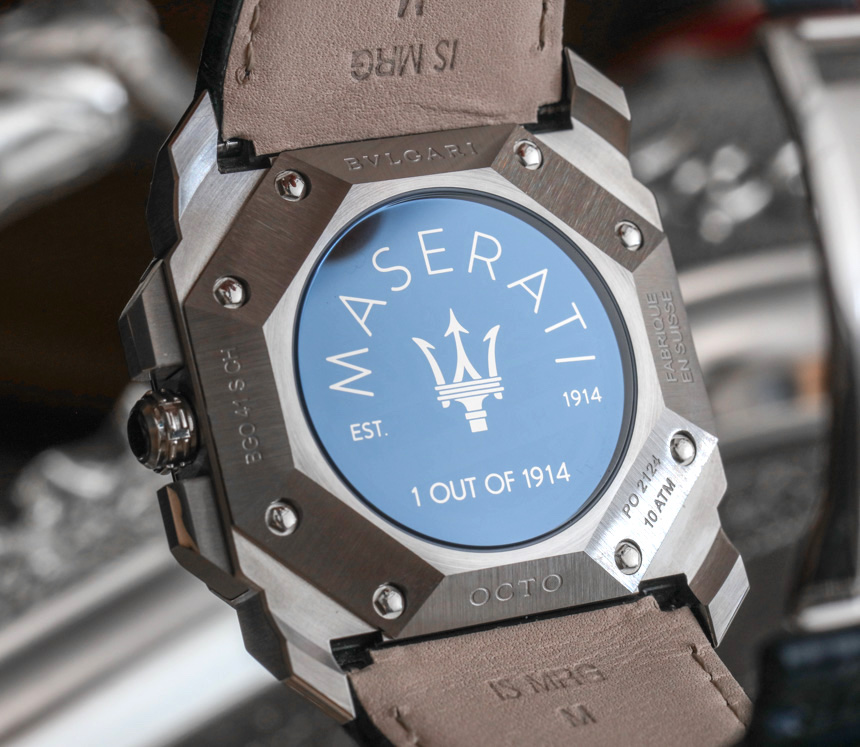 Like the Octo Velossimo Chronograph watches, the Bulgari Octo Maserati Chronograph is also powered by Calibre BVL 328, which, as I mentioned earlier, is based on Zenith’s El Primero. The movement is well-finished and interesting to look at, but in place of a transparent sapphire case back as is found on the non-limited edition Octo Velossimo watch, the Bulgari Octo Maserati Chronograph has a semi-transparent case back upon which the Maserati logo is emblazoned. This is the most obvious Maserati branding on the watch. 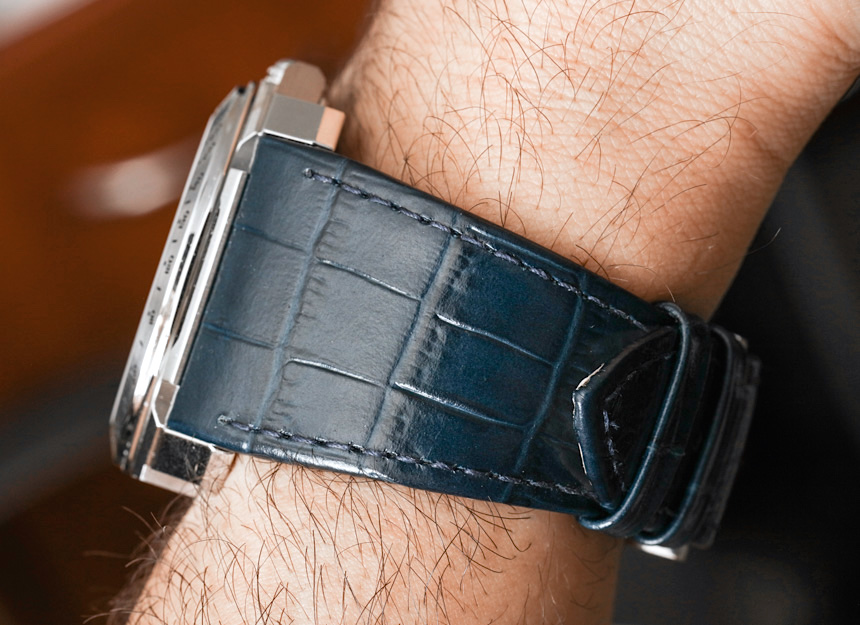 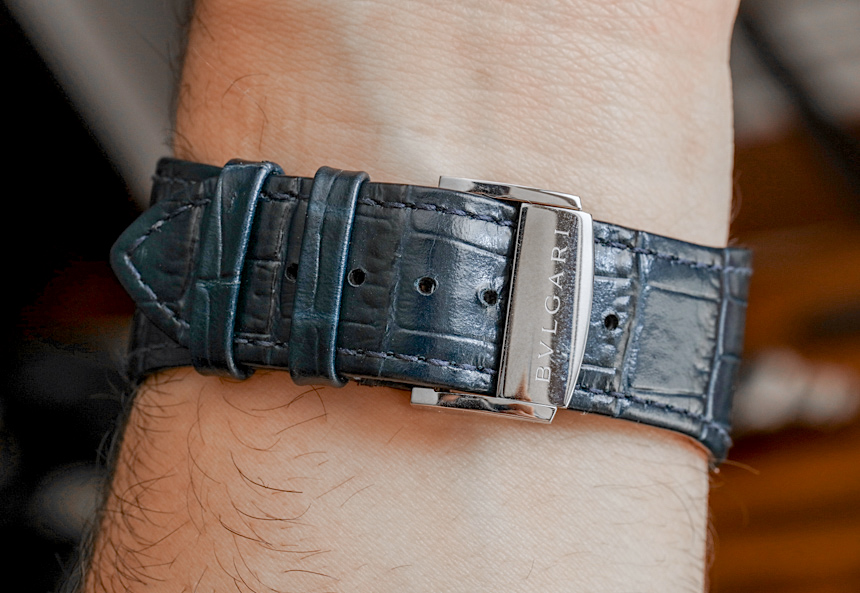 On the wrist, Bulgari Octo Maserati Chronograph wears well and has a commanding wrist presence thanks to the elaborate Octo case, bright blue dial, and accompanying blue alligator leather strap. It’s not overly thick either, which is nice because the overall look and feel of the watch are equal parts sporty and elegant. In other words, the Bulgari Octo Maserati Chronograph won’t look out of place whether you are in a boardroom or at the beach. 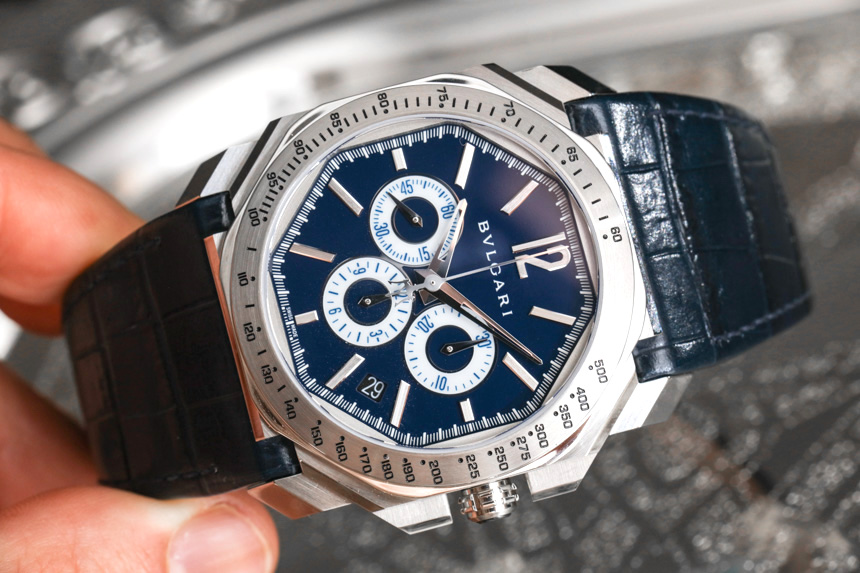