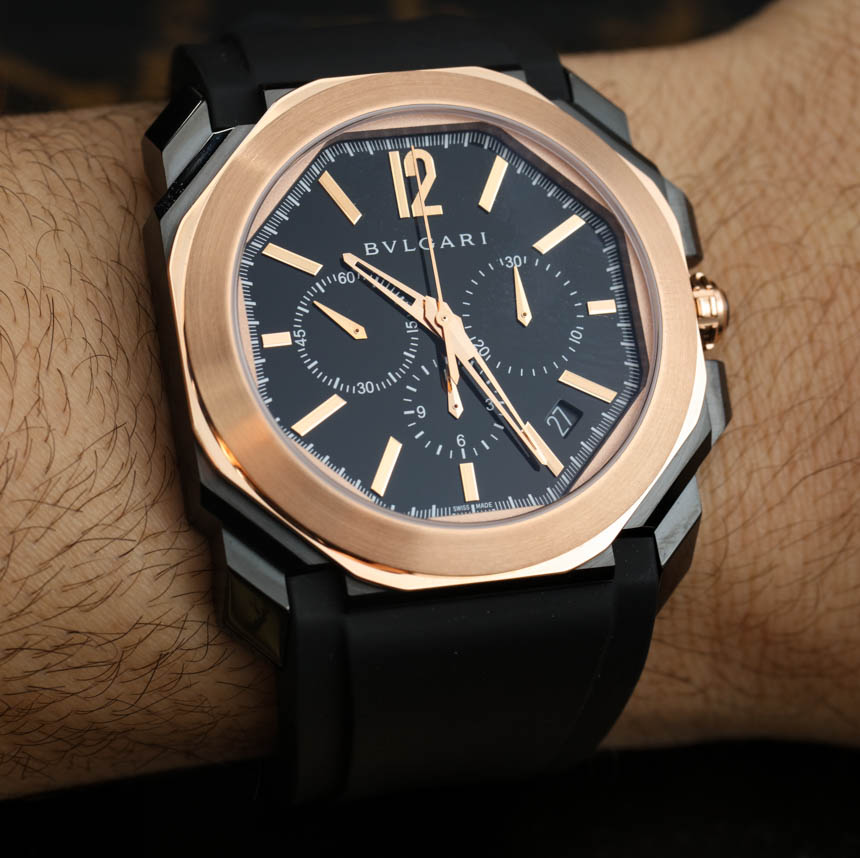 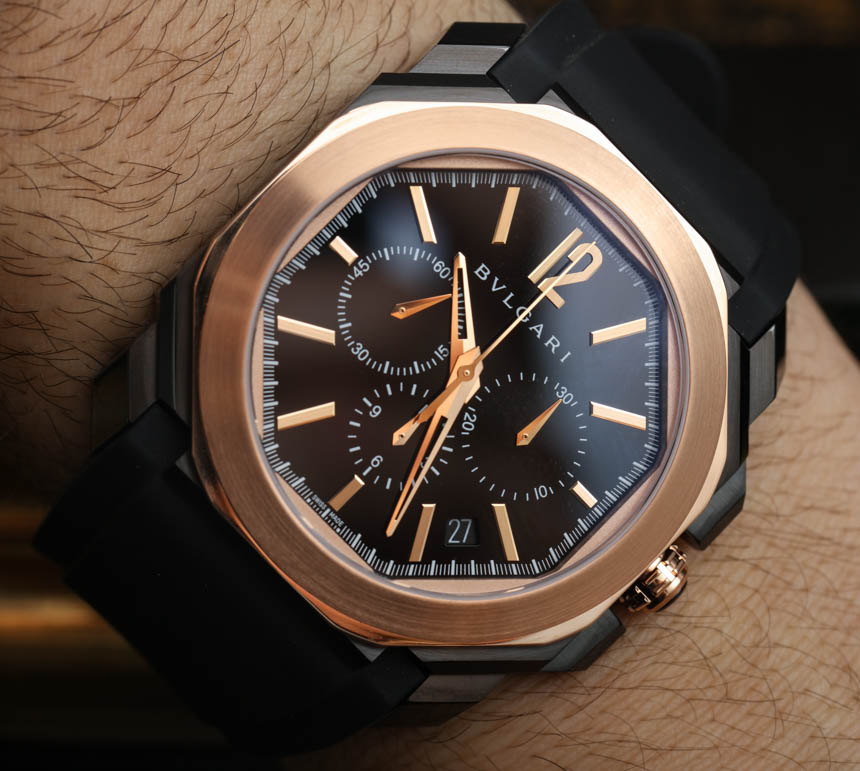 Early in 2016, Bulgari added a few slick-looking Ultranero (“very black”) watches to the Octo collection (debuted here), which is quickly becoming the latest “must-have” distinctive design. It’s funny how iconic designs aren’t born, but are bred. The Audemars Piguet Royal Oak wasn’t a “smash hit” right out of the gate, but took years for watch enthusiasts to appreciate how it stood up to other watches. The Octo is another Gerald Genta timepiece which is really coming into its own as Bulgari carefully curates it into a variety of forms. 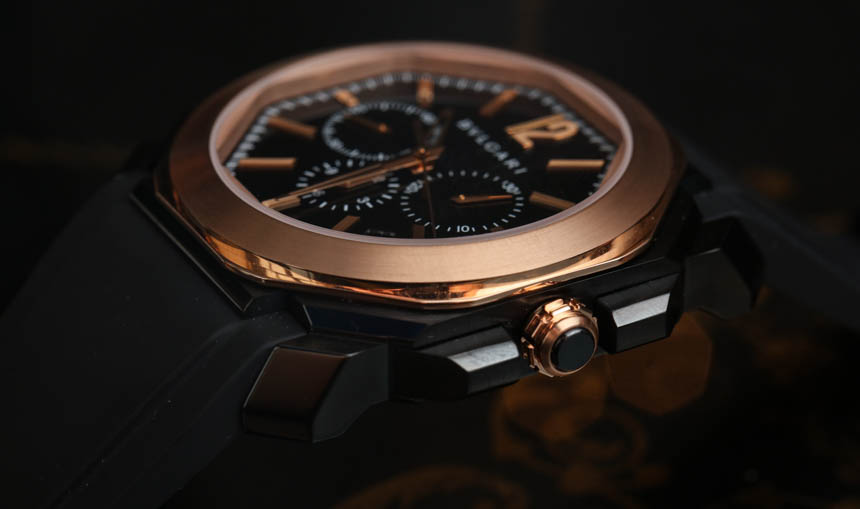 Despite the addition of 18k pink gold, this is probably one of the most sporty Octo chronograph models to date. Much of this is thanks to the new tapering black rubber strap that makes the watch more comfortable than ever. Also, the black lacquer dial contrasts with the matching pink gold hands and hour markers in a way that makes this Bulgari Octo Velocissimo Ultranero among the most legible of the lot. I’m not going to claim that the watch is cheap, but with black DLC-coated steel and 18k pink gold, it does cost about the same as a steel Rolex Daytona. 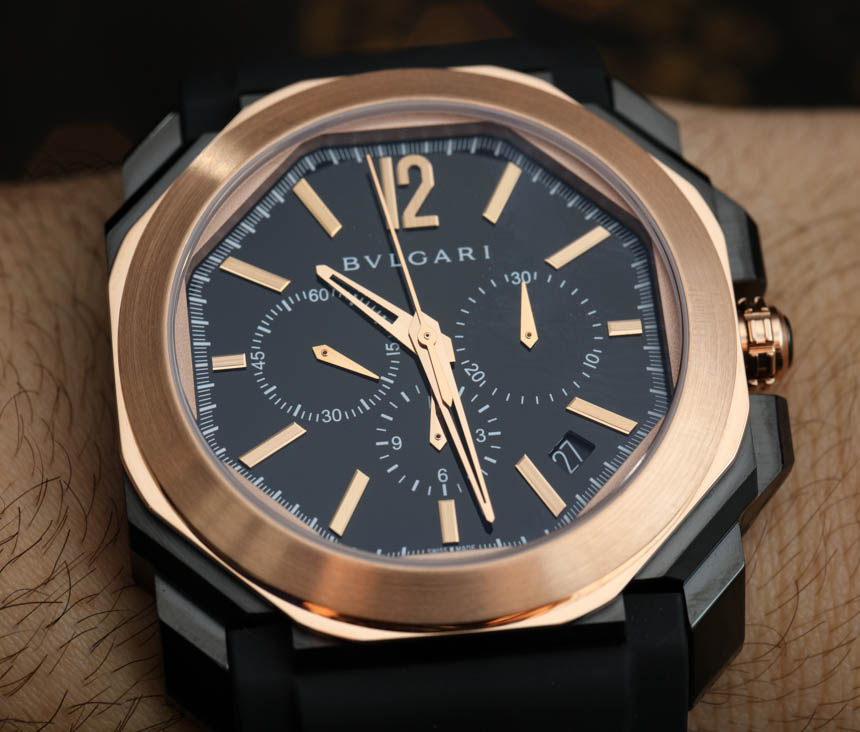 What’s made the Bulgari Octo Velocissimo Ultranero chronograph so oddly beguiling is its use of what is essentially a Zenith El Primero “high-beat” chronograph movement. In this watch, the movement is called the Bulgari caliber BVL 328, but it is essentially a re-branded El Primero in architecture. While Zenith has been known to sell some El Primero movements to outside brands, in this case, it is more like “parts sharing,” since Bulgari and Zenith are both part of the LVMH luxury group. 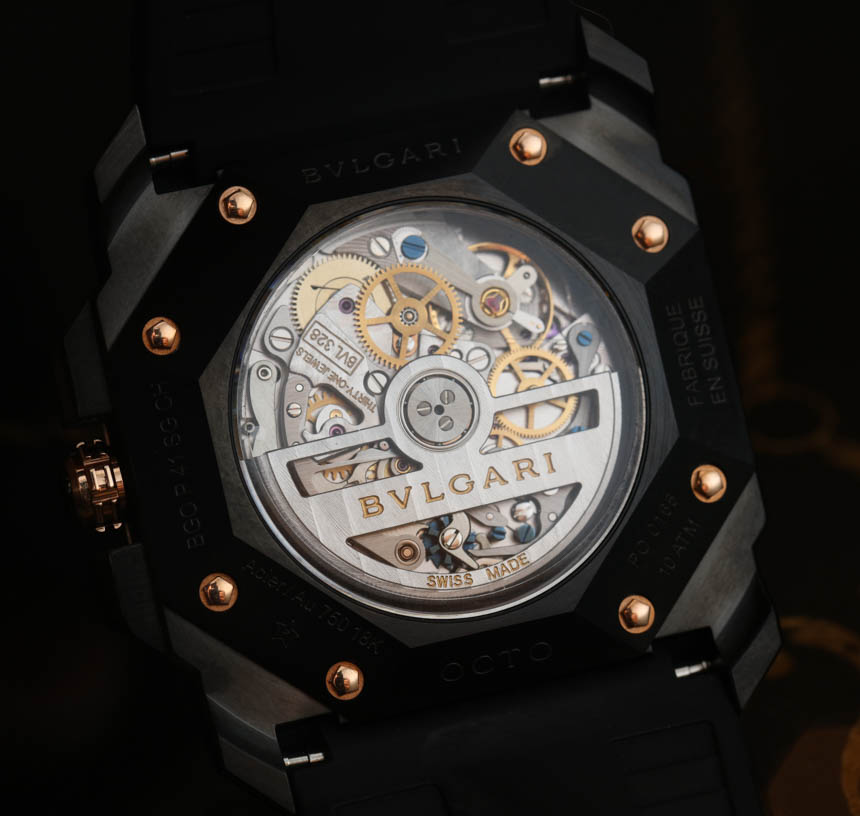 The BVL 328 automatic chronograph has a 50-hour power reserve and operates at 5Hz (36,000 bph). The movement is rather nicely decorated and looks cool when viewing it through the sapphire crystal caseback on the rear of the watch flanked by large pink gold screws. Bulgari isn’t exactly hiding the base El Primero design, and the idea is that “watch guys in the know” understand that this isn’t at all just another chronograph. True, you can get the El Primero in lower-priced Zenith watches, but that isn’t the point. The point here is that you are getting a cool Octo chronograph watch, and it is made better by the choice of movement used by Bulgari for this and the other (non-Ultranero) Bulgari Octo Velocissimo watches. 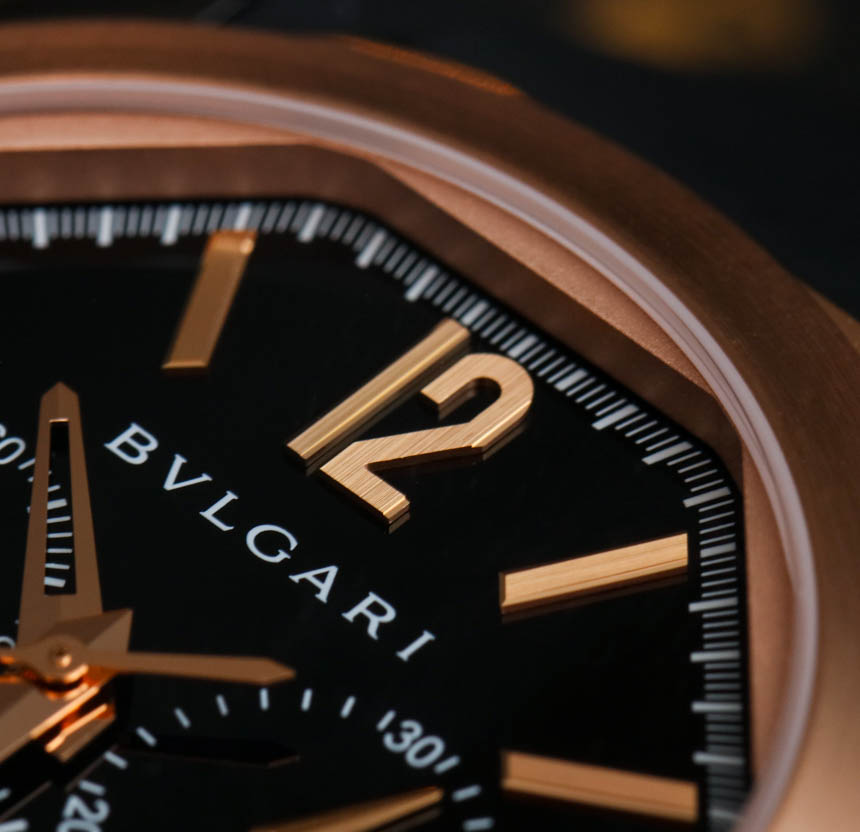 The base steel case has both polished and brushed sections which show through the DLC-coating. One of the things I really hate is when a watch has a lot of nice contrast polishing in naked steel, but when coated in PVD or DLC there is one uniform style of finishing, and the same nice watch ends up looking cheap. For that reason, I highly appreciate it when a black-coated watch case retains the contrast polishing it was meant to have. 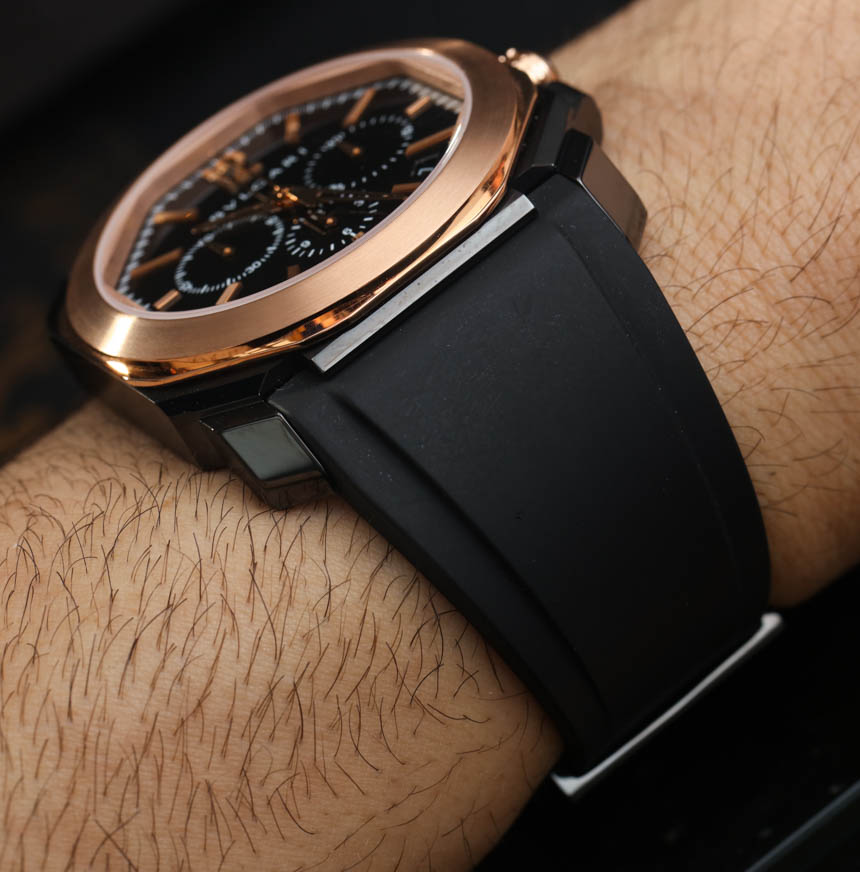 I will admit that much of the appeal of the Bulgari Octo Ultranero watches (which ironically would be a lot more “very black” without the gold), is how they look. These are very pretty watches, and the gold manages to look stately rather than blingy. This is the type of watch a man can feel proud to reward himself with, and not really worry that people will look at him and ask “what is he trying to compensate for?” Being able to achieve that type of masculine/luxury mixture is hard to do, and I suppose the Italians happen to be the best at it.

Put another way, the Bulgari Octo Velocissimo Ultranero has enough gold, without having too much of it. It also has the Octo case, which here being 41mm wide (13.07mm thick), looks bold without being too large in its square-ish dimensions. Really, the genius of this design is how it blends angles and curves in a way that is both harmonious and provocative at the same time. Yes, I am not at all trying to hide the fact that I really like the Octo in most of its variants. 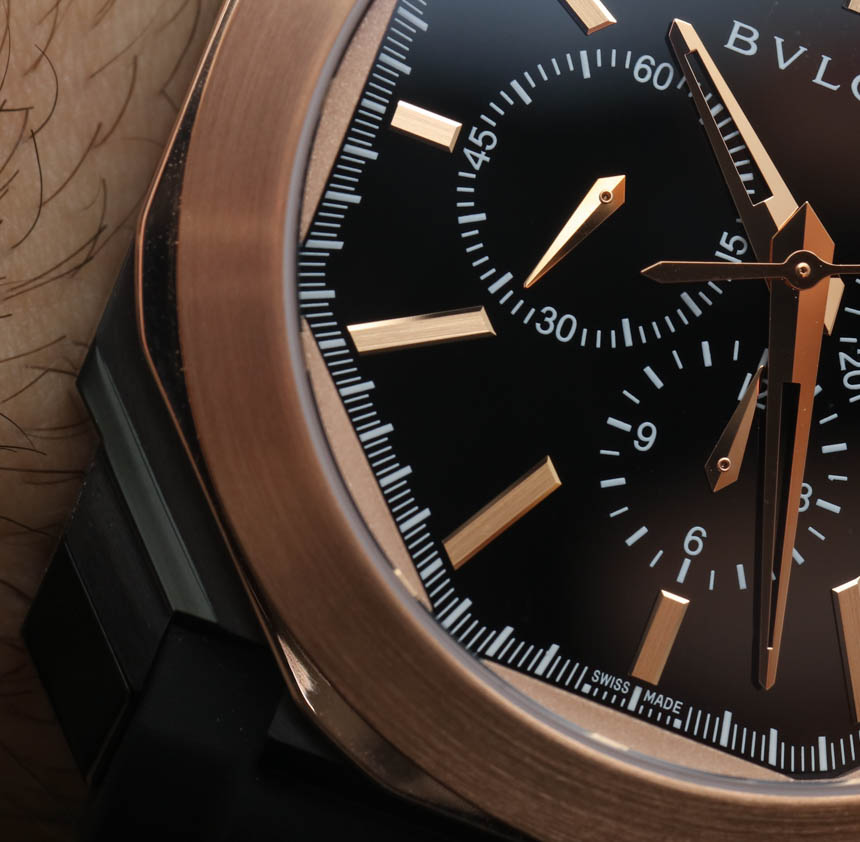 The new Octo rubber strap is also available for the Octo Solotempo (time-only, three-hand model) which is good news since it really helps make the Octo case even more versatile. It is really interesting how the entire personality of the Octo seems to change if it is on a rubber or alligator strap, or on a bracelet. Anyhow, going back to the Bulgari Octo Velocissimo Ultranero chronograph watch, it should be available now with a price of 12,950 Swiss francs. bulgari.com