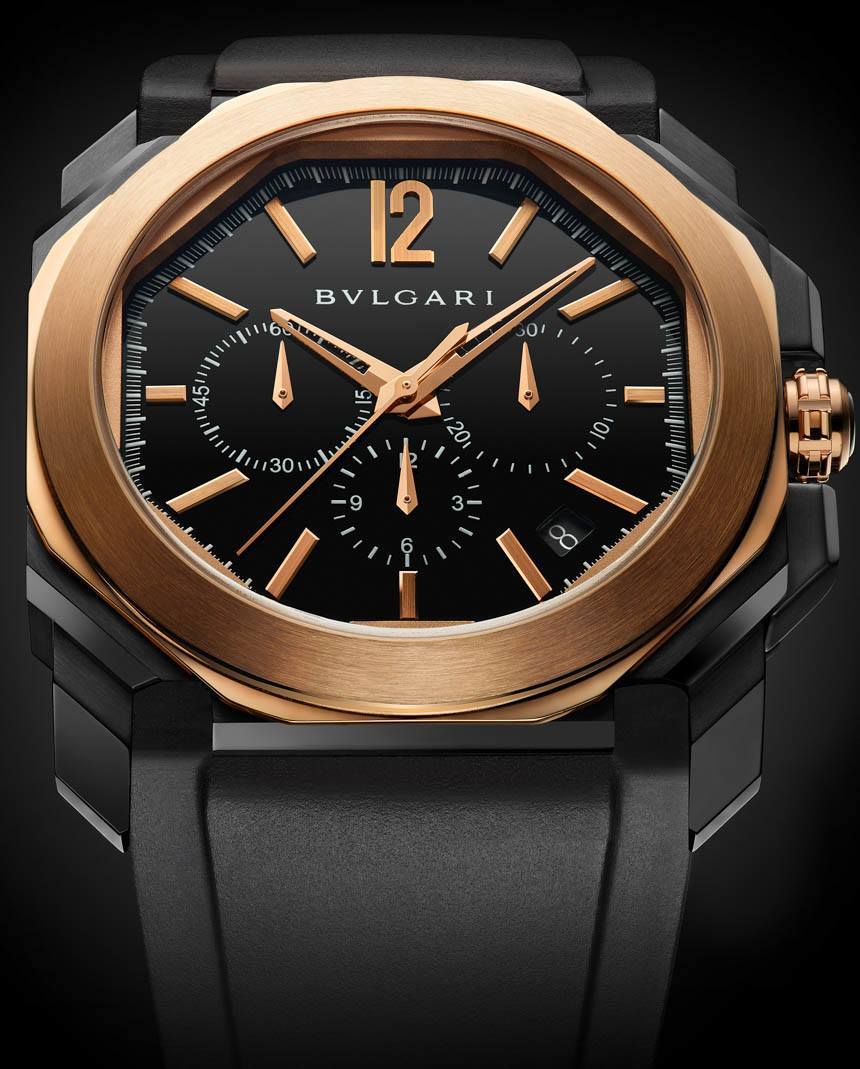 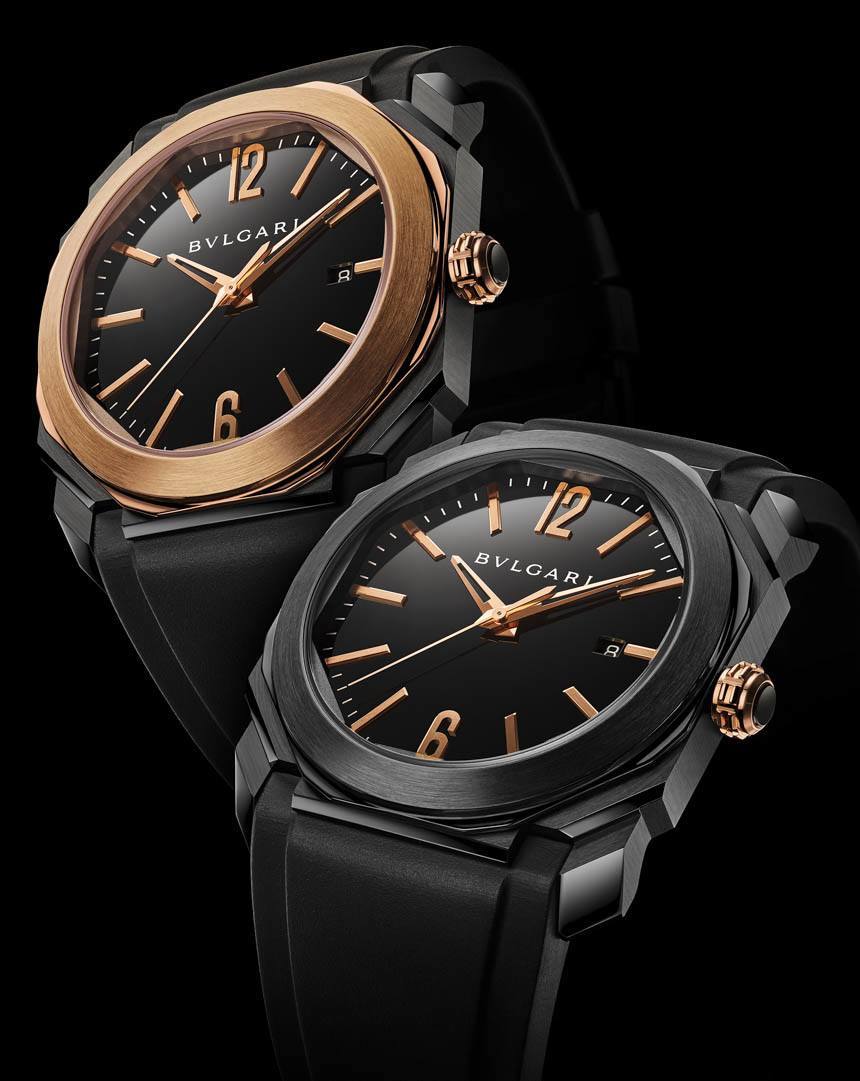 Bulgari will soon release the first Ultranero (“very black”) versions of the Bulgari Octo watch starting with four new models that look quite good at first glance. I first noticed Bulgari’s use of the “Ultranero” title when covering the very original-looking Bulgari Tourbillon Saphir here (as there is a Tourbillon Saphir Ultranero model), and the term sounds quite cool for what Bulgari uses to describe their timepieces which have DLC black coatings.

The Bulgari Octo watch collection is quickly becoming one of our avant-garde favorites that, in our opinion, nevertheless has a lot of “classic value.” That means we feel that the Octo collection is different enough to become a mainstay of the Bulgari collection years from now as the product family evolves and becomes further associated with the brand. It will be a tall climb to reach the ranks of the Audemars Piguet Royal Oak or the Patek Philippe Nautilus, but the Octo has the potential to become just such a classic, and perhaps less than coincidentally, also came from Gerald Genta when Bulgari absorbed the Gerald Genta brand into their own a few years ago.

What each of the Buglari Octo Ultranero watches have in common is playing with 18k pink gold and black – to varying degrees based on each Bulgari Octo Ultranero model. For a long time, I have been a big fan of mixing black and gold, so this particular color combination particularly appeals to me. Of course, the real test will be seeing the Bulgari Octo Ultranero watches in person to determine how Bulgari uses contrast polishing. Sometimes when brands coat a watch, they don’t take the time to preserve the interesting mixtures of brushed and polished surfaces, and the resulting piece looks entirely matte. Such a look can be desirable, but in many instances, the polishing style of the natural metal base should be preserved as much as possible.

For these Bulgari Octo Ultranero models, Bulgari appears to maintain the excellent polishing techniques used for the steel and gold versions of the Octo even with the DLC black coating. Interestingly enough, in addition to the three steel Bulgari Octo Ultranero models is the DLC-coated black titanium-cased Bulgari Octo Finissimo Tourbillon which comes in a 40mm-wide case. Debuted in 2014, the Bulgari Finissimo Tourbillon continues to be world’s thinnest tourbillon watch with its 1.95mm-thick in-house made Bulgari caliber BVL 268 Finissimo tourbillon movement which operates at 3Hz with a power reserve of 52 hours. One of the tricks of the movement in being so thin is mounting the tourbillon cage on ball bearings. 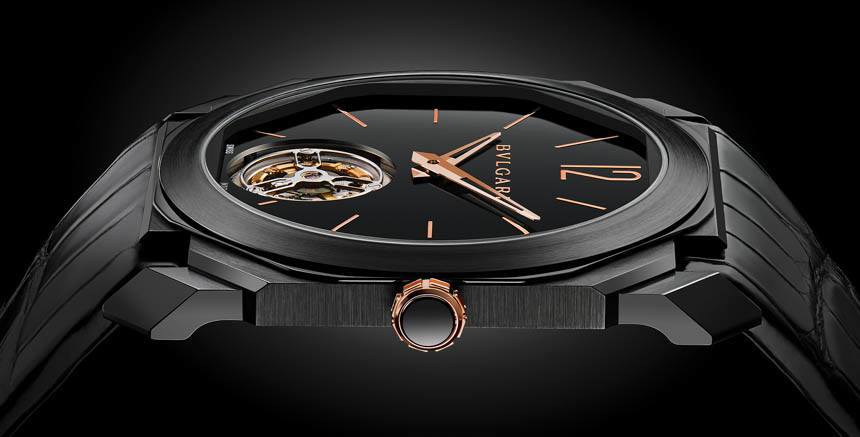 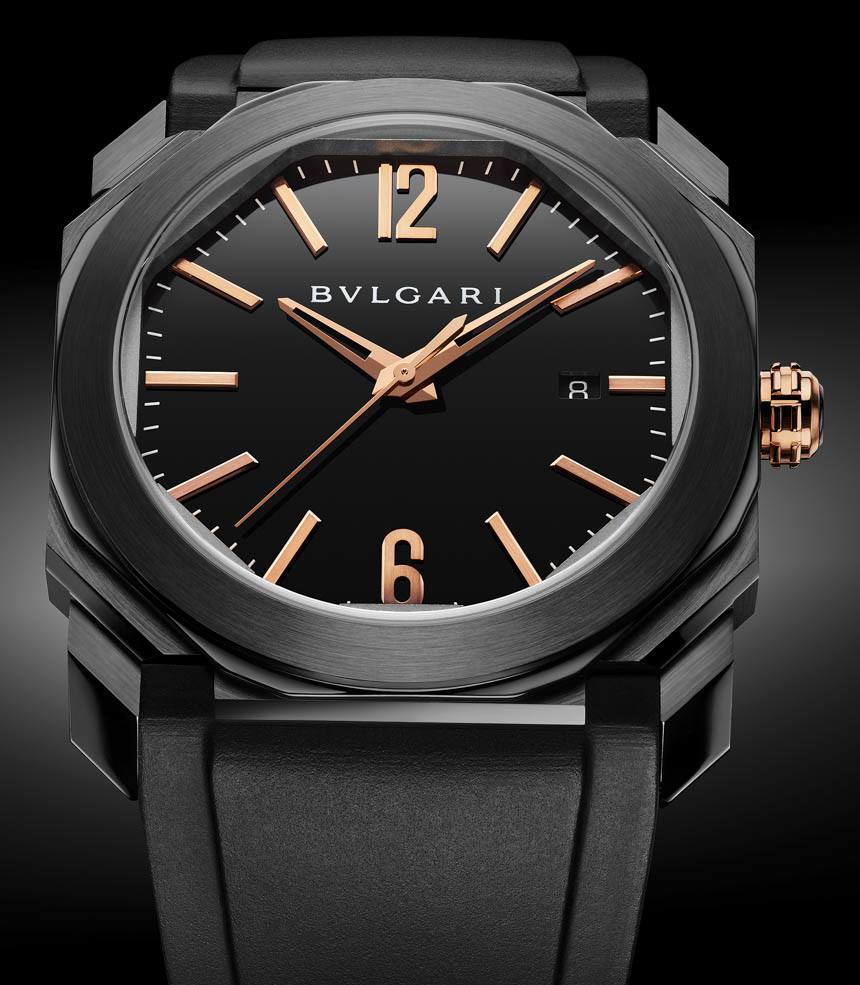 It will be interesting to see how light the titanium Bulgari Octo Finissimo Tourbillon will feel on the wrist with its accompanying black alligator strap. The all-black look of the case is complimented with pink gold hands and hour markers that I suspect will offer a high level of legibility. From there, we go to the Bulgari Octo Velocissimo Ultranero which is based on the Octo Chronograph that Bulgari originally debuted in 2014. With a 41mm-wide Octo case in DLC-coated black steel, here we see black mixed with not only gold on the dial but also an 18k pink gold bezel – done with a brushed polishing for a more stately versus shiny look.

Bulgari borrows from the LVMH family and the Bulgari Octo Velocissimo uses the Zenith El Primero chronograph movement that Bulgari refers to as their caliber BVL 328. This “high-frequency” 5Hz automatic chronograph movement operates at 36,000bph and has a 50-hour power reserve. As is the case on all Octo watches, the Velocissimo has a transparent sapphire crystal caseback in order to get a view of the movement. Moreover, the Bulgari Octo Velocissimo Ultranero – along with the Octo Solotempo – has a new black rubber strap. I believe this is the first time I’ve seen a rubber strap for the Octo collection watches, and I am enthusiastic as to how they might look and feel in person. 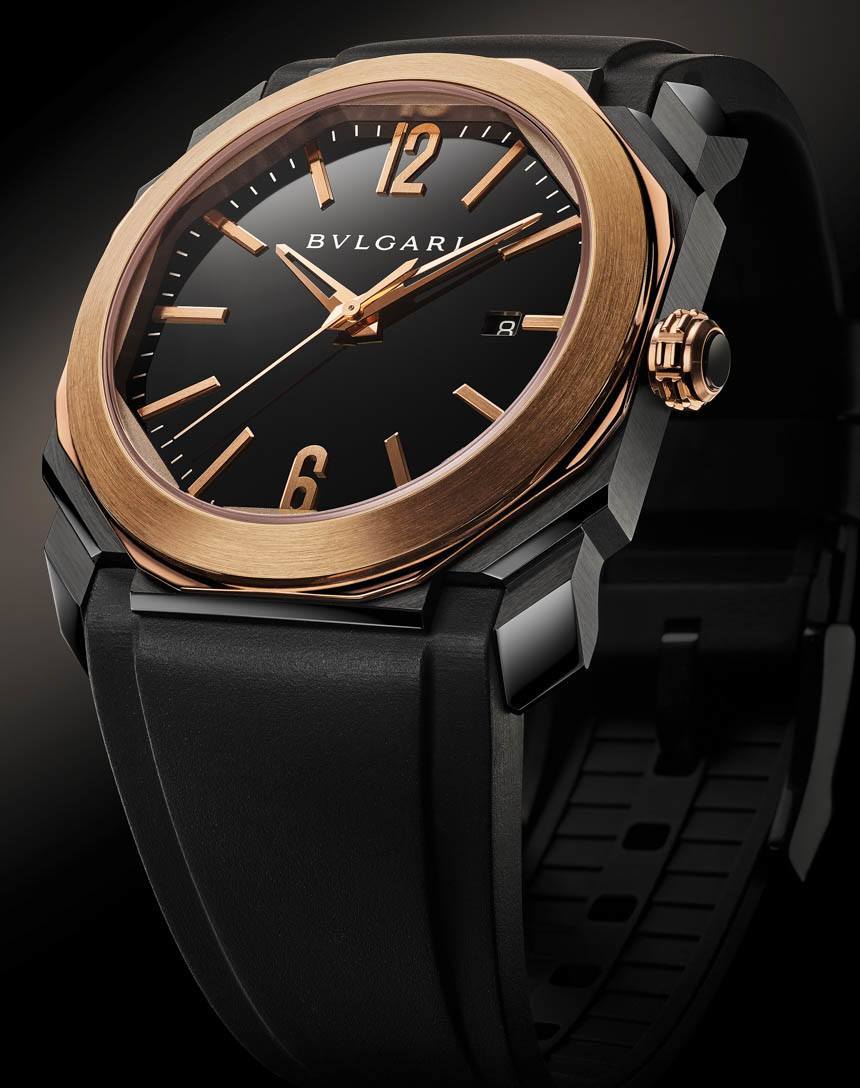 Let me stop for a moment and comment on my appreciation of the clever “Solotempo” name of the three-hand Octo watches. “Solotempo” just means “time only,” and it is an attractive way of giving the watch a more interesting sub-title identifier after Octo, rather than just “Automatic” or something like that. Buglari will offer two versions of the Bulgari Octo Solotempo Ultranero, with or without an 18k pink gold bezel. The version without the pink gold bezel will have a matching DLC-coated steel bezel to go with the rest of the case.