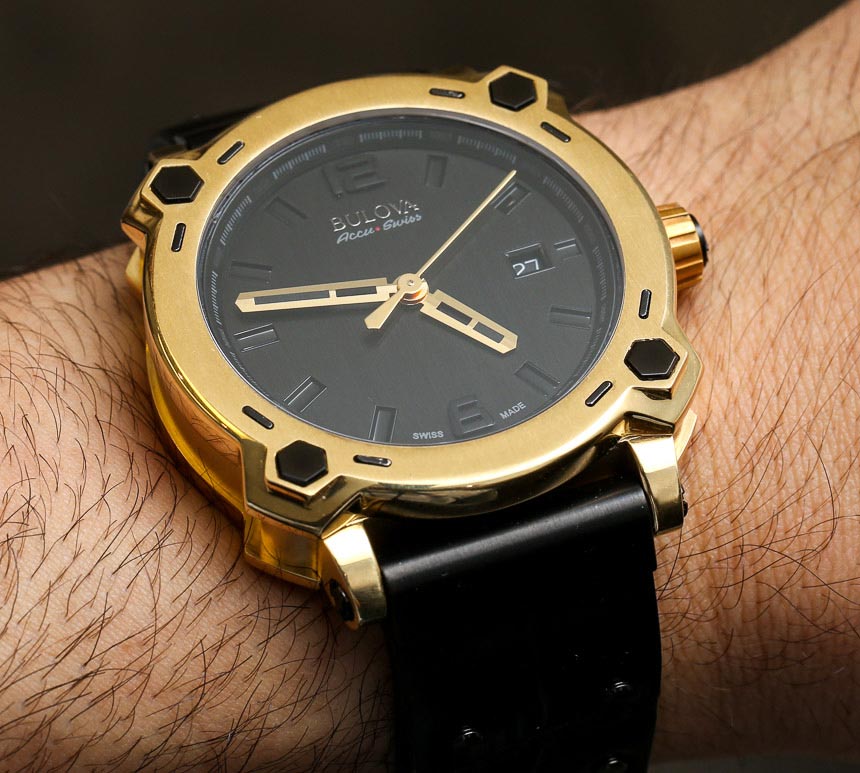 The absolute best part of Baselworld isn’t just the discovery of new watches you expect companies to release, but even more so those watches that you would have never expected them to make. In that latter category is this new Bulova Accu-Swiss Percheron ref. 65B164 watch in the world’s only 24k gold case. In addition to the interesting use of material, it also features a new design and wild looking strap, the latter of which I will dedicate some time to discussing at the end of this article. 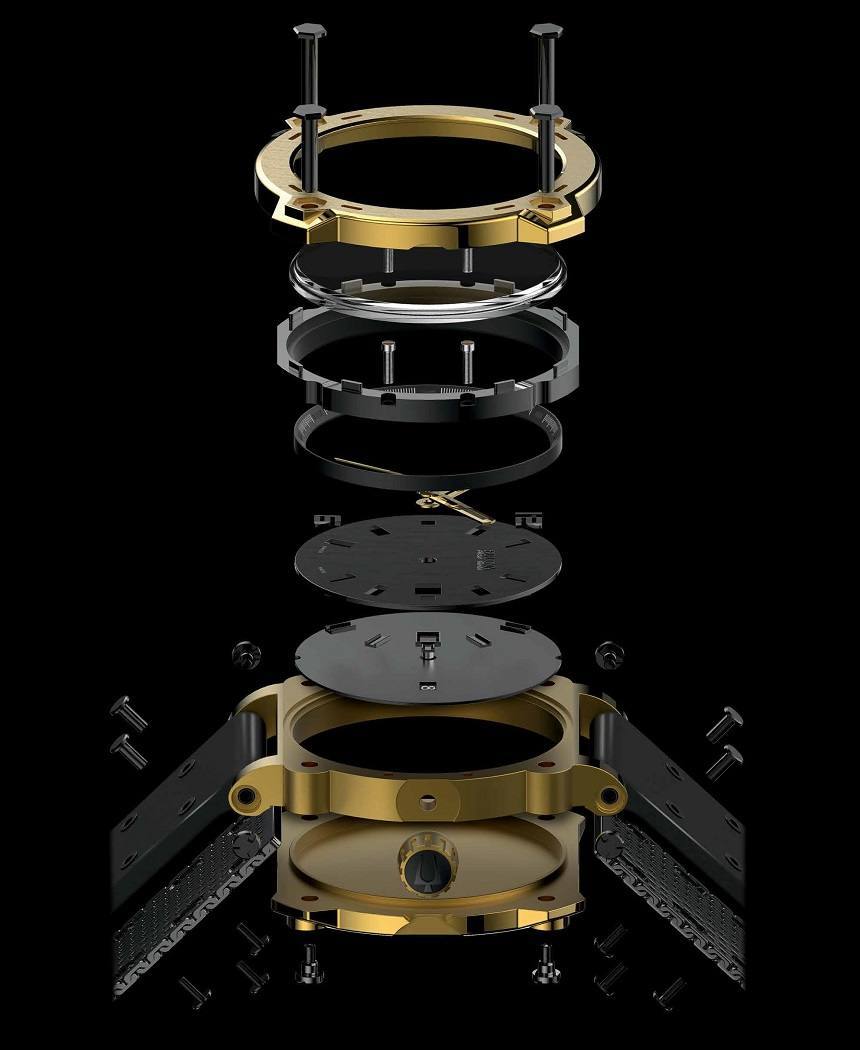 The 24k gold Bulova Accu-Swiss Percheron is a pet project of the still-new Bulova President Greg Thumm. As a watchmaker, Thumm himself always wanted a timepiece made out of 24k, versus 18k, gold. The difference is that 24k gold is pure gold, and 18k gold is an alloy. Why do luxury watches use a gold alloy? Are they trying to be cheap? Not at all, 18k gold is used because pure gold is too soft for most purposes, especially for a watch case. Pure gold will wear away and scratch very easily, so 18k (or historically 14k) gold is preferred. 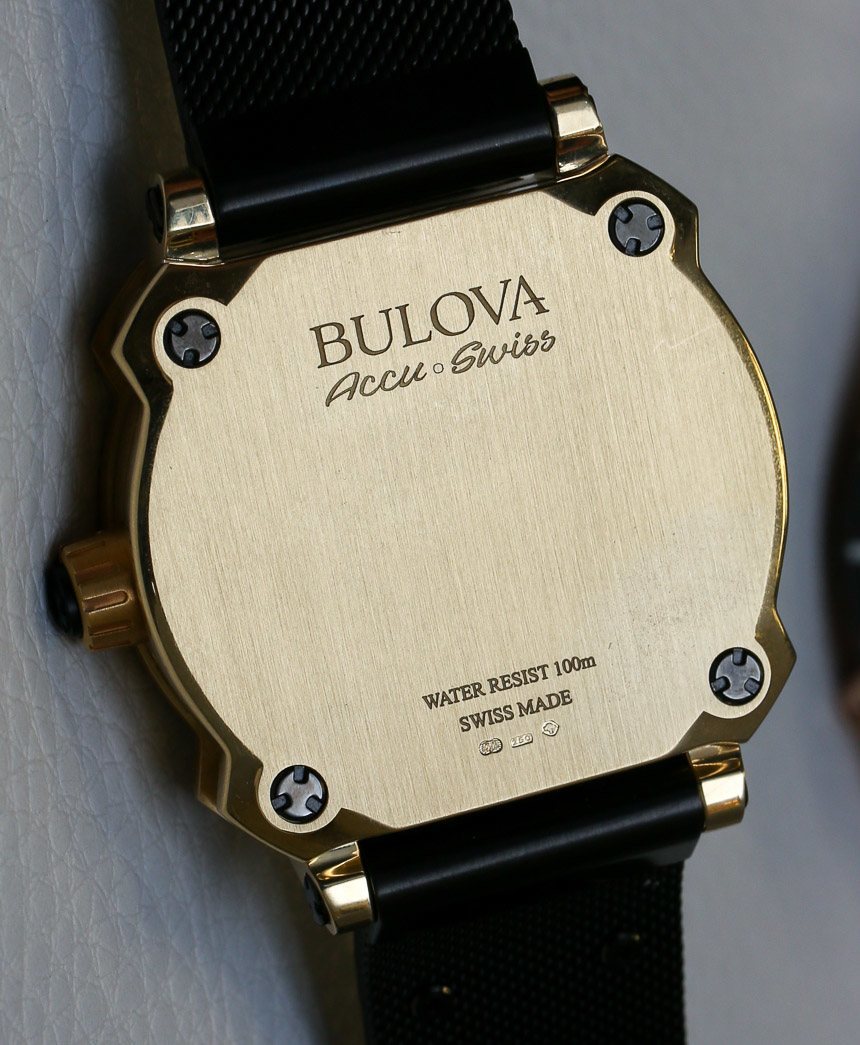 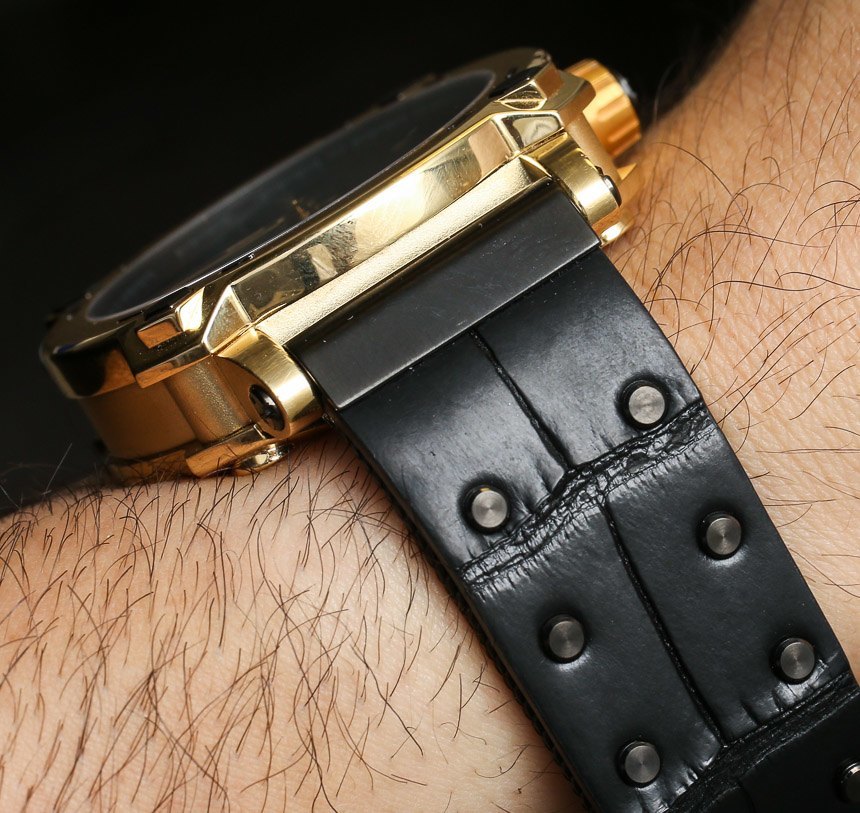 So how did Bulova get away with producing a watch case from 999.9 pure gold? The answer is in forging. Bulova discovered a process where pure gold could be forge hardened to make it much more useful as a case material. Because of the forging process, the gold is said to be much more durable and thus useful for what Bulova wanted.

24k gold is used for the entirely of the case, save for the screws and some detailing, and makes up a new case design released by Bulova for 2014 that they call the Percheron. “You have no idea how difficult it is find available names for watches” Bulova explained to me. I have no doubt. It is common practice for companies of all types of register an “intent to use” for a future trademark. Percheron might be a difficult to remember name, but it a term that applied to a particular French breed of horse–so it does have an equestrian angle. Bulova will produce other Percheron watches of course, and the 24k gold model will simply sit at the top of the ladder, being a particularly unique model. 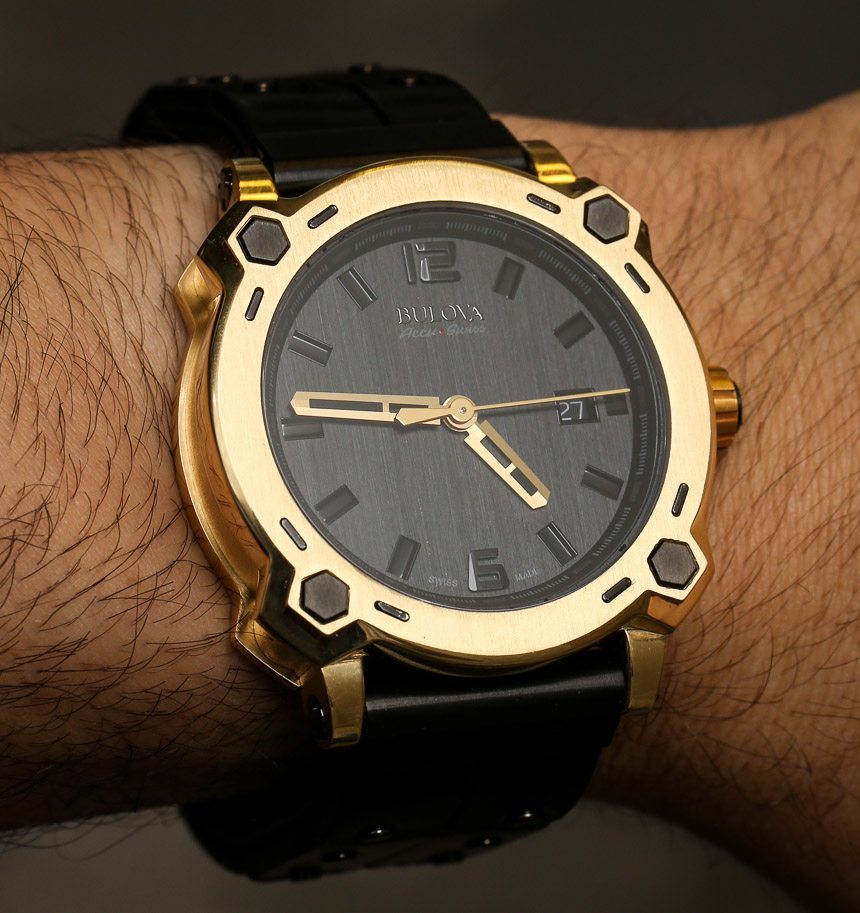 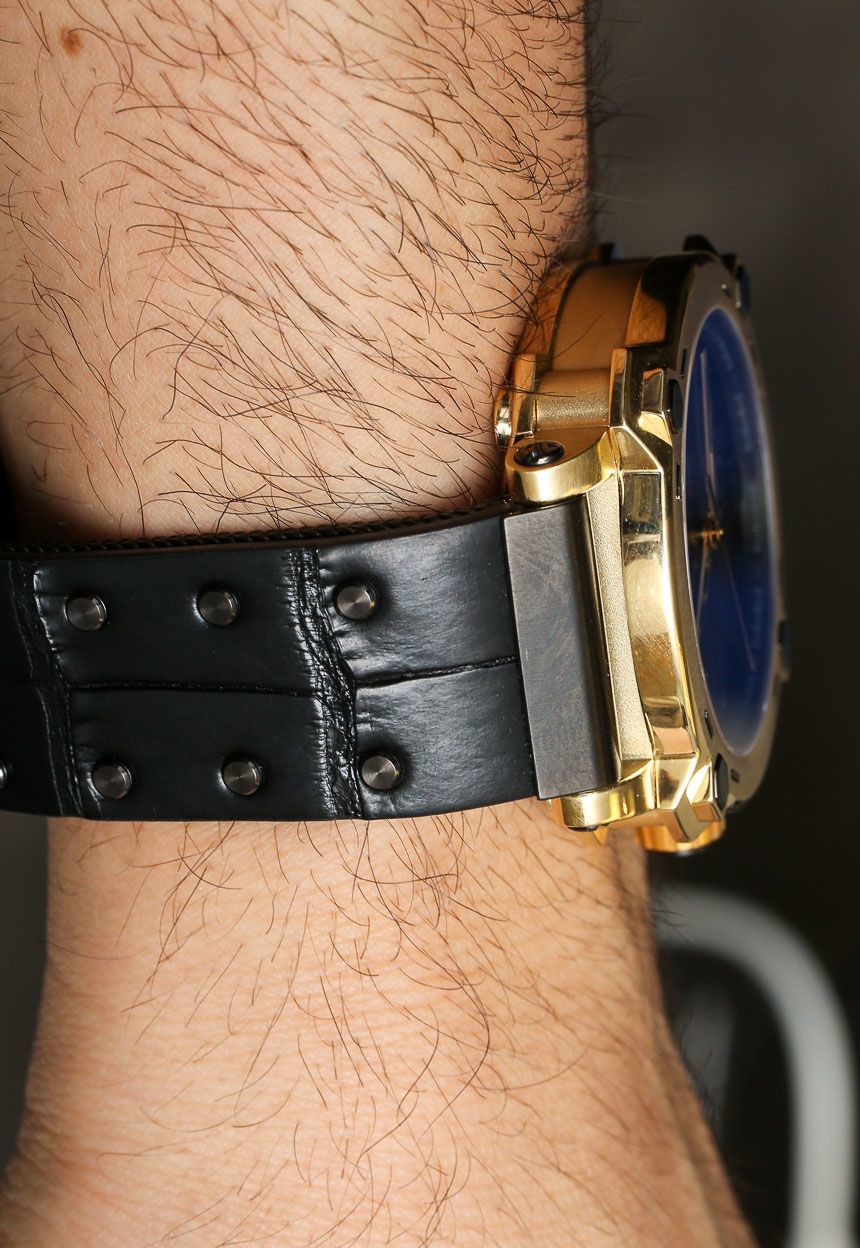 Sort of cushion-shaped, the Percheron case is surprisingly sized at just 40mm wide. It wears larger due to its overall thickness and cushion shape, but at 40mm wide it is comparatively mid-sized compared to other watches out there of this ilk. Unique design elements are the lug structures as well as the black-colored hexagonal screws used in the each of the four corners of the bezel as well as an insert in the crown. The case, of course, has an anti-reflective-coated sapphire crystal and is water resistant to 100 meters. The black elements on the case are most produced from grade 5 titanium. 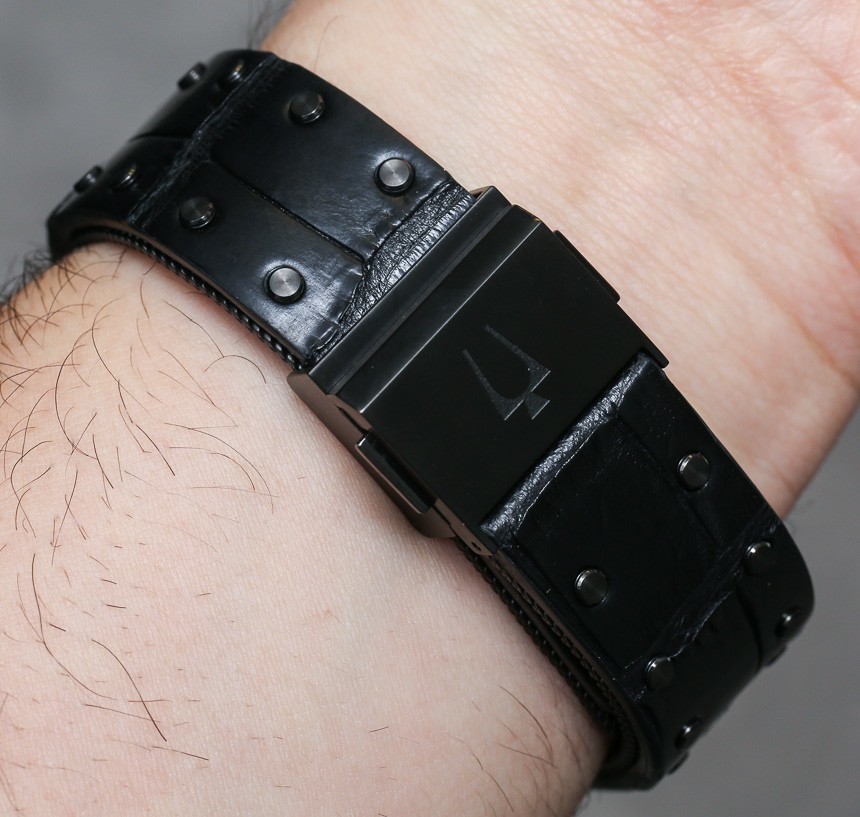 The Percheron is also one of the debut watches under Bulova’s Accu-Swiss collection of watches. The new “Accu-Swiss” name is used to designate those Bulova watches that contain Swiss mechanical movements. The specific movement in the Percheron family is the Swiss Sellita SW200 automatic.

The dial of the Bulova Accu-Swiss Percheron is a mixture of modern design elements and simplicity. It is a three-hand dial with the date, while emphasis is on the hands as the hour markers are black on black. Rather than being applied, the hour markers are actually cut into the dial. I think that over time Bulova will be able to continue to refine the look of the Percheron’s dial. Maybe this one needs more 24k gold? Speaking of which, there is nothing boldly stating that the case material is 24k versus 18k gold, so it is something really the user will have to know, or those who can simply look at gold and see that it is more pure in color. 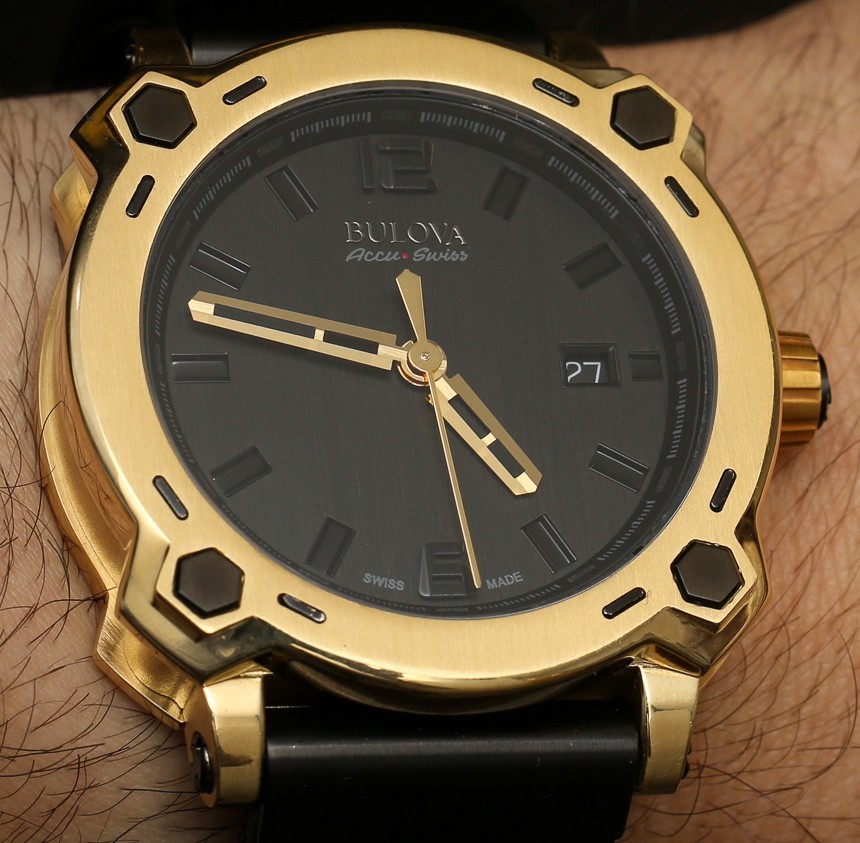 Aside from the 24k gold case material, there is a special feature this particular Bulova Accu-Swiss Percheron model has that none of the others will be available with, and that is the strap. I mused with Bulova that the strap is “dungeon kinky” in style. Perhaps you will agree with me, and it is among the most non-obviously complex straps out there. From the outside, it appears to be an alligator strap (well it is real alligator) with rivets in it that go down the length of the strap. Inside the strap is a black-color mesh metal bracelet in steel.

So let’s see here, a base layer of steel chain mail that has leather riveted to it, and it is is all black? If that isn’t a bit dungeon kinky, I don’t know what is. The strap is actually rather amazing on the wrist and I can easily say that there is nothing else out there like it. I think this strap deserves a collection unto itself and Bulova should sell it separately to go with other watches. In fact, on a less expensive watch, I can see some people buying a watch for the strap alone.

Not with this model, however, as the Bulova Percheron 24k gold watch will come with a price to match the hefty amount of virtually pure forged gold. If you want one, Bulova further warns of a six-month lead time for production give the niche nature of this reference 65B164 model. It comes with a price of $42,000. bulova.com