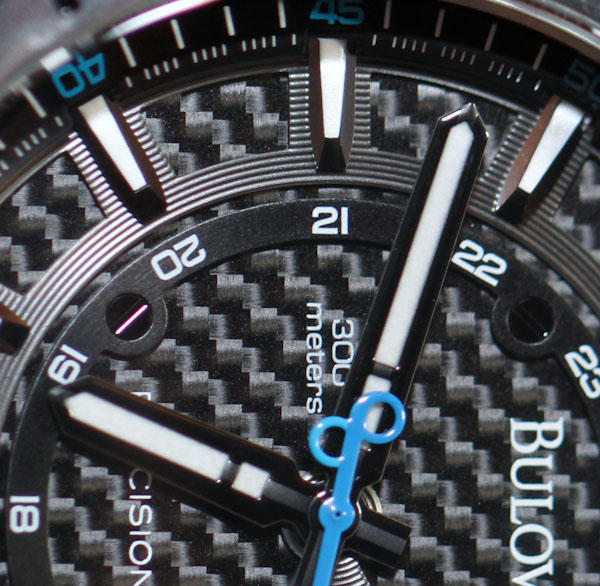 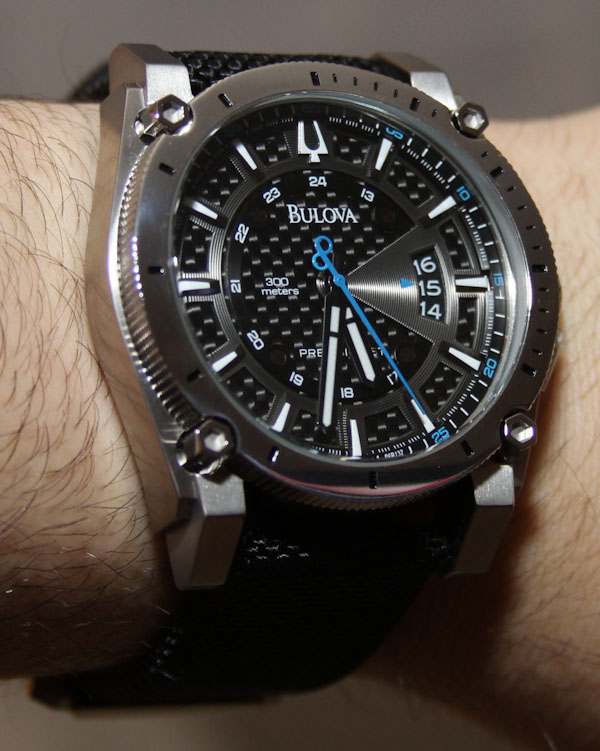 For all that it is, I don’t think that the newer Bulova Precisionist watch collection gets enough attention. I don’t blame people because it takes a bit of education to understand what makes these watches so special – especially at their price. What you essentially have here is a high-end quartz watch at relatively inexpensive price.

The Precisionist is a sort of sub-line under Bulova right now as each of them have the same movements. Right now there is really only one Precision movement (or movement style), but I have a feeling in time there will be more. Thus, all Precisionist watches will have both “Bulova” and “Precisionist” on the dial – but also fall into their own collections. This piece for example is in the Precisionist Champlain collection and is the model reference # 96B132. I’d like to thank WatchCo.com – who have a nice collection of Bulova Precision watches (among others) available – for supplying this review piece.

Let’s talk about the movement and why it is cool first. Inside all the current Precisionist watches are the Japanese made Bulova caliber P102.12 or P112.10 quartz movements. As far as I know those are the only two Precisionist movements available right now. Bulova is owned by Citizen (Japanese) at this time, but used to be US owned. The movement offers three major desirable features. First and most importantly is the accuracy. The watch is accurate to about plus/minus 10 seconds a year. That is in comparison to about 15 seconds a month for standard quartz movements. It is also comparable to much higher-end Japanese and Swiss thermocompensated quartz movements. Second, the watch has a smooth sweeping seconds hand. It is smooth like the seconds hand on a Seiko Spring Drive, and more smooth that the seconds hand on most mechanical watches. Third, it has an acceptable battery life rated at between 2-3 years per power cell.

The reason most quartz watches have a ticking seconds hand is to save on battery power. Pushing a seconds hand along all the time requires a lot of power, and quartz movements must slowly sip power from their batteries. This is the one element of the Bulova Precisionist I really don’t understand – how Bulova was able to give the watch a sweeping seconds hands and retain a battery life of 2-3 years. It might be because they use a high-energy lithium ion battery. I am not sure and it is hard to find this information online. Whatever the technology, this is a major feat, and many people will enjoy the piece’s high precision and the sophisticated look of a mechanical watch dial in a quartz piece. 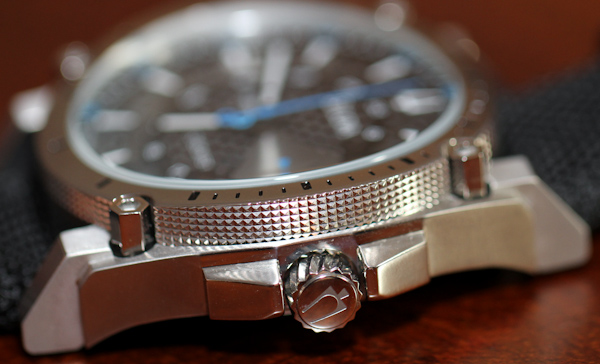 How is the watch so accurate without thermocompensation? Well, according to Bulova, Precisionist movements use a three-versus-two prong quartz crystal as the regulator. Apparently the addition of this third prong not only allows for a higher frequency movement, but also creates some type of stabilizing effect. The P102.12 movement operates at 262,144 Hertz. That is really fast and accounts for the accuracy. In comparison, a standard quartz movement operates at 32,768 Hertz, and a mechanical movement operating at 28,800 bph is only running at 4 Hertz.

Operation of the Bulova Precisionist seems to be exactly the same as any other quartz watches – save for the sweeping seconds hand and enhanced accuracy. Overall, this is an amazing and very modern quartz movement that anyone interested in watches or accuracy should know about. I further think it is interesting that Bulova aimed straight for analog watches, when it might have made sense for Citizen to place it into digital watches first. Yes, these might compete with their atomic-controlled models, but I think it represents a distinct technology. Precisionist movements hopefully will blossom into a much larger collection. 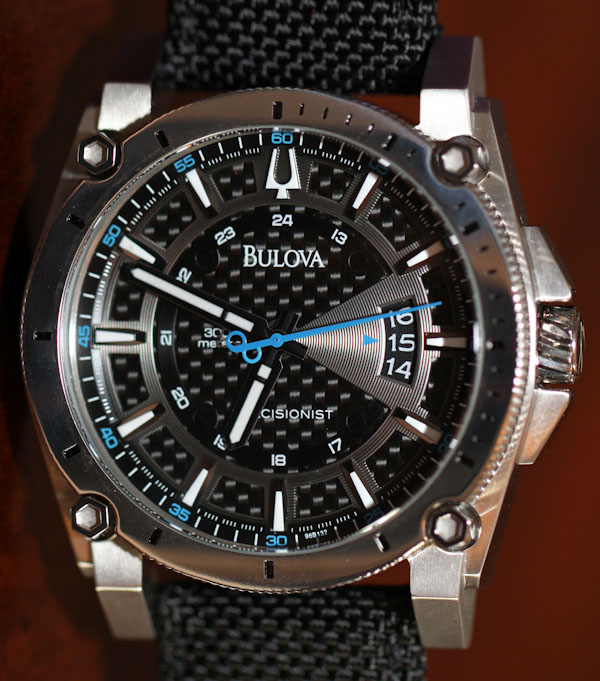 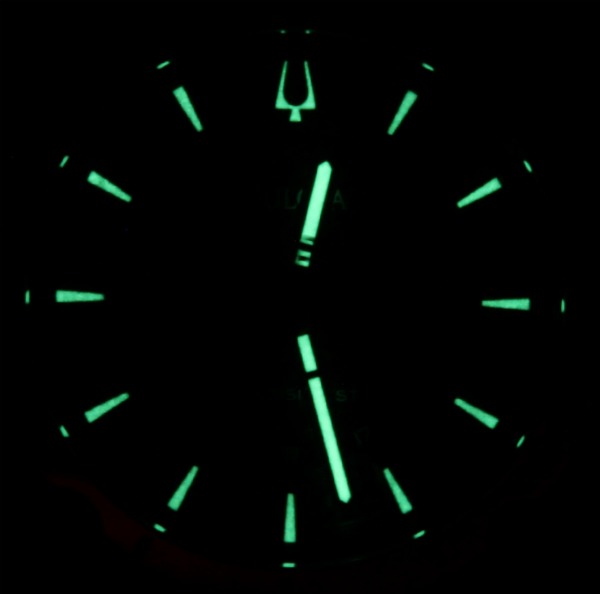 The growing range of Precisionist watches from Bulova contains both formal and sporty watches. Each have a very unique character to them. This Champlain model comes in a rather comfy but large 46.5mm wide case, here done in titanium. There are steel models available as well, and ones in black colored cases. This model is marked by a multi-layered carbon fiber dial with nice blue seconds hand. I like the logo at the end of the seconds hand which is both a “double P” for “Precisionist,” as well as an infinity loop symbol.  The case is rather well engineered but mass produced. The round dial is matched with an angular look for the case and I like the large hexagonal screws on the corners. the bezel looks like a rotating bezel but sadly is not. The crown design and texture is a nice detail. 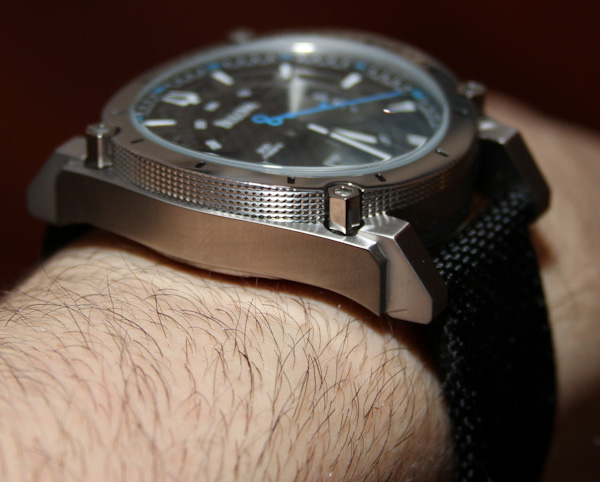 Bulova opted for a curved crystal that I believe is coated mineral glass, for these watches.  The curvature is nice but offers some visual distortion making it look a bit like you are seeing the dial inside of a bubble. The modern dial design combines relatively good legibility with all sort of little details, textures, and things to look at. The hands are lume covered and big enough to see without too much distraction. There is an open date window that uses a black disc. The color is good, but I am never a fan of open “extended” date windows. There are four screws on the dial to match the look of those on the case, and the carbon fiber is deep feeling. For me the prominent hour markers and hands make it enough to appreciate. While it lacks a European sense of design refinement (as is the case with most Japanese analog watches – but not all), it is enough given the theme and technology.

The case is actually pretty sporty with 300 meters of water resistance and a relatively light weight given the size. The straps on Precisionist watches seem to be a source of contention. While the quality is fine, many people seem to think they have a better idea of what matches the design of the watch. On this model Bulova opted for a Cordura fabric strap that sort of visually matches the carbon fiber on the dial. The black textile strap is actually OK in my opinion, but you could easily swap it out with another 24mm wide strap to give it a more personalized look. Other Champlain models come on steel metal bracelets. 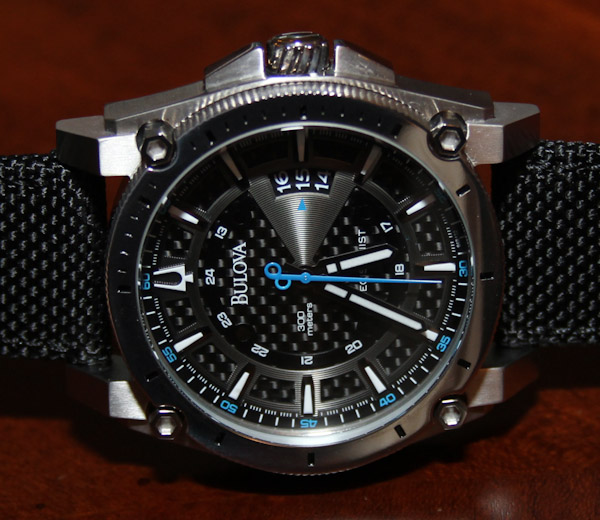 Thanks to WatchCo.com for the review unit. Opinions are 100% independent.
Advertising Message