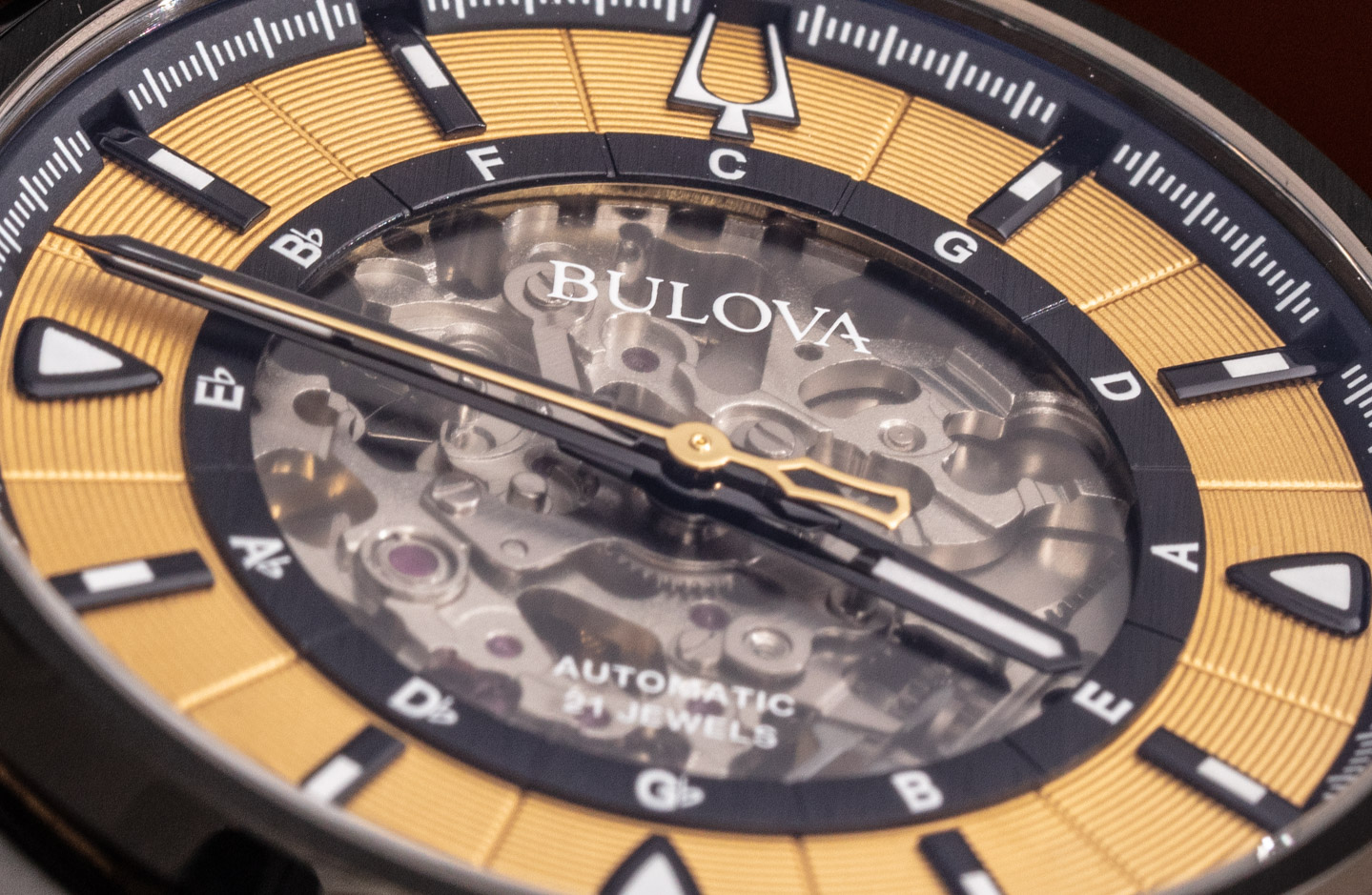 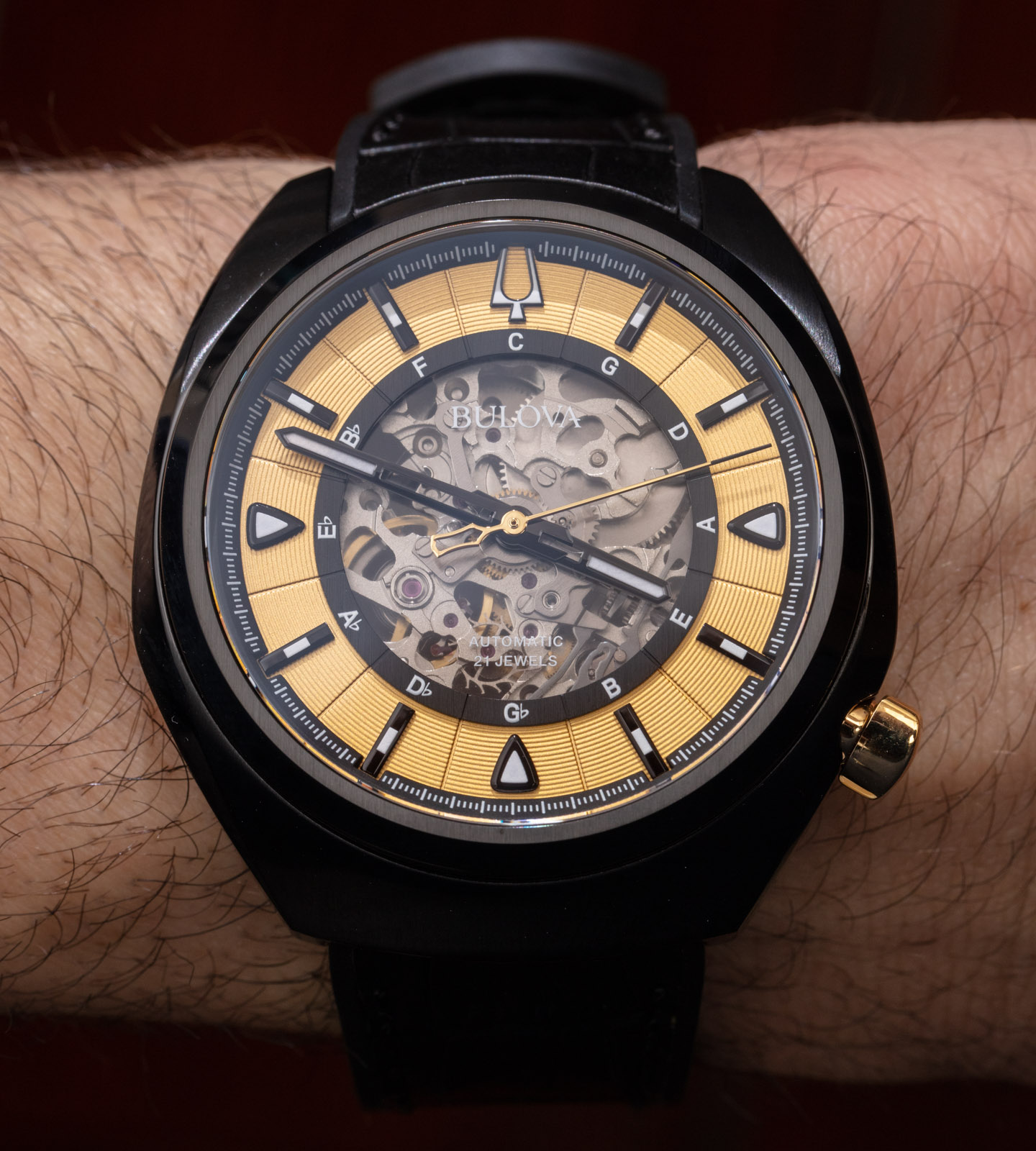 As a sponsor and the official watchmaker of the Grammy awards, Bulova also happens to have some watches dedicated to the important music awards institution. At first, Bulova was modifying some of its existing products with Grammy award labeling (hands-on with the Bulova Precisionist Special Grammy Edition watch here), but more recently, the importance of the relationship with The Grammys prompted Bulova to create an entirely unique wristwatch product for the event. Today, I go hands-on with the reference 98A241 Bulova Grammy watch.

Grammy watches are important not just for their commercial value but also because Bulova supplies many of them to the Grammy Awards in order to hand out to winners. Watches are some of the most popular items given as rewards to accomplished people, so it makes sense that Bulova wants Grammy Award winners to wear a Grammy watch. 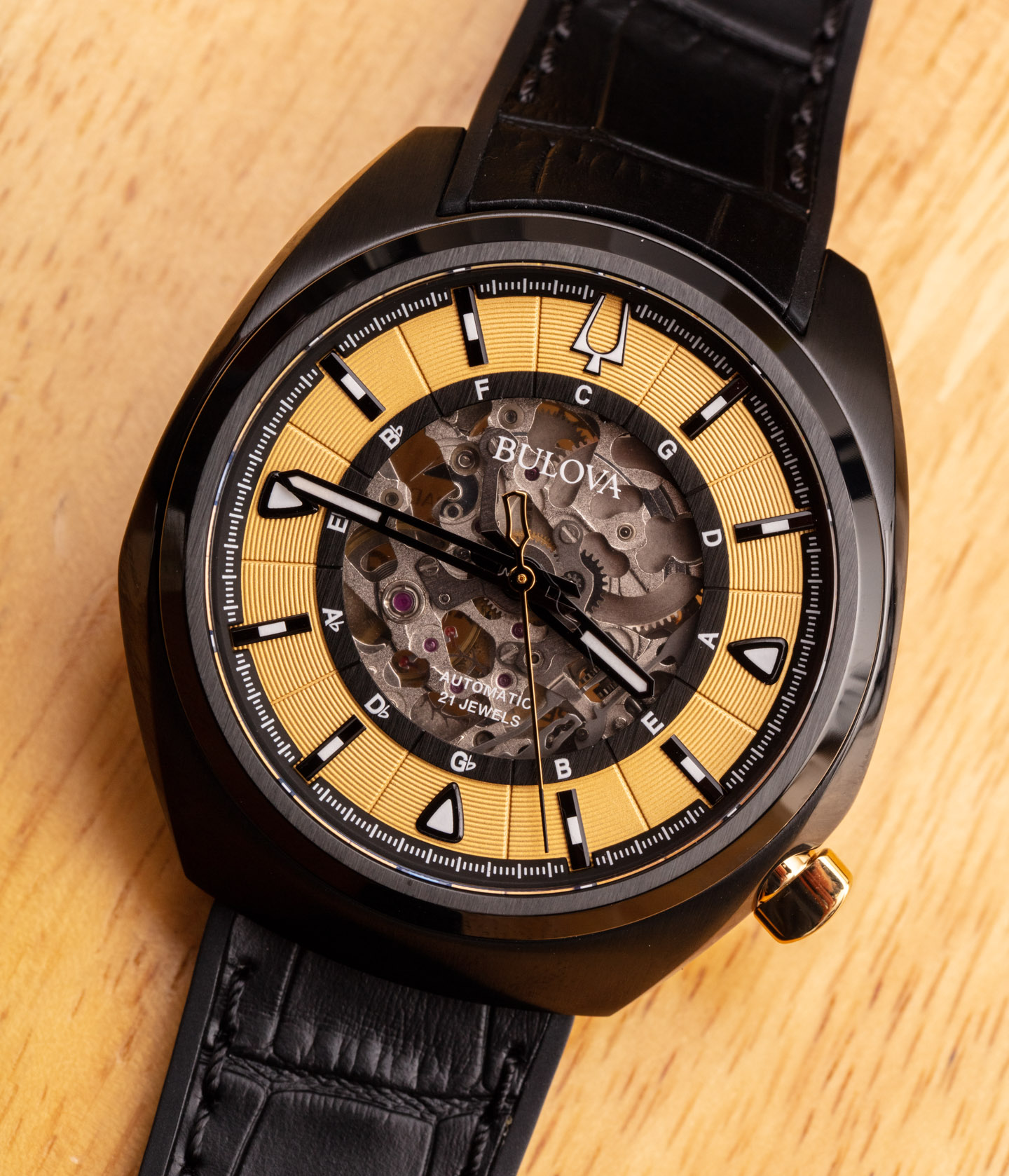 Much of the Bulova watch is inspired by guitars. Some of the hour markers look like guitar picks, and the crown is meant to look like a guitar neck’s tuning knob/peg. Finally, the dial of the Bulova Grammy watch has hour markers but also music notation symbols. In the ring pattern, these letter-based characters represent the popular “Circle of Fifths” in music. I’m not a musician myself, but I understand that the Circle of Fifths is known to pretty much all music students and is a powerful tool that has been used by musicians for over 2,000 years. The Circle of Fifths is also an analogy to the scale we use for time. Time dials break up the day or hours into sections, just as the Circle of Fifths creates a scale of pitches separated into five pitch progressions. It makes for a neat feature on the dial and helps keep the watch neatly within the music world it’s designed to celebrate. 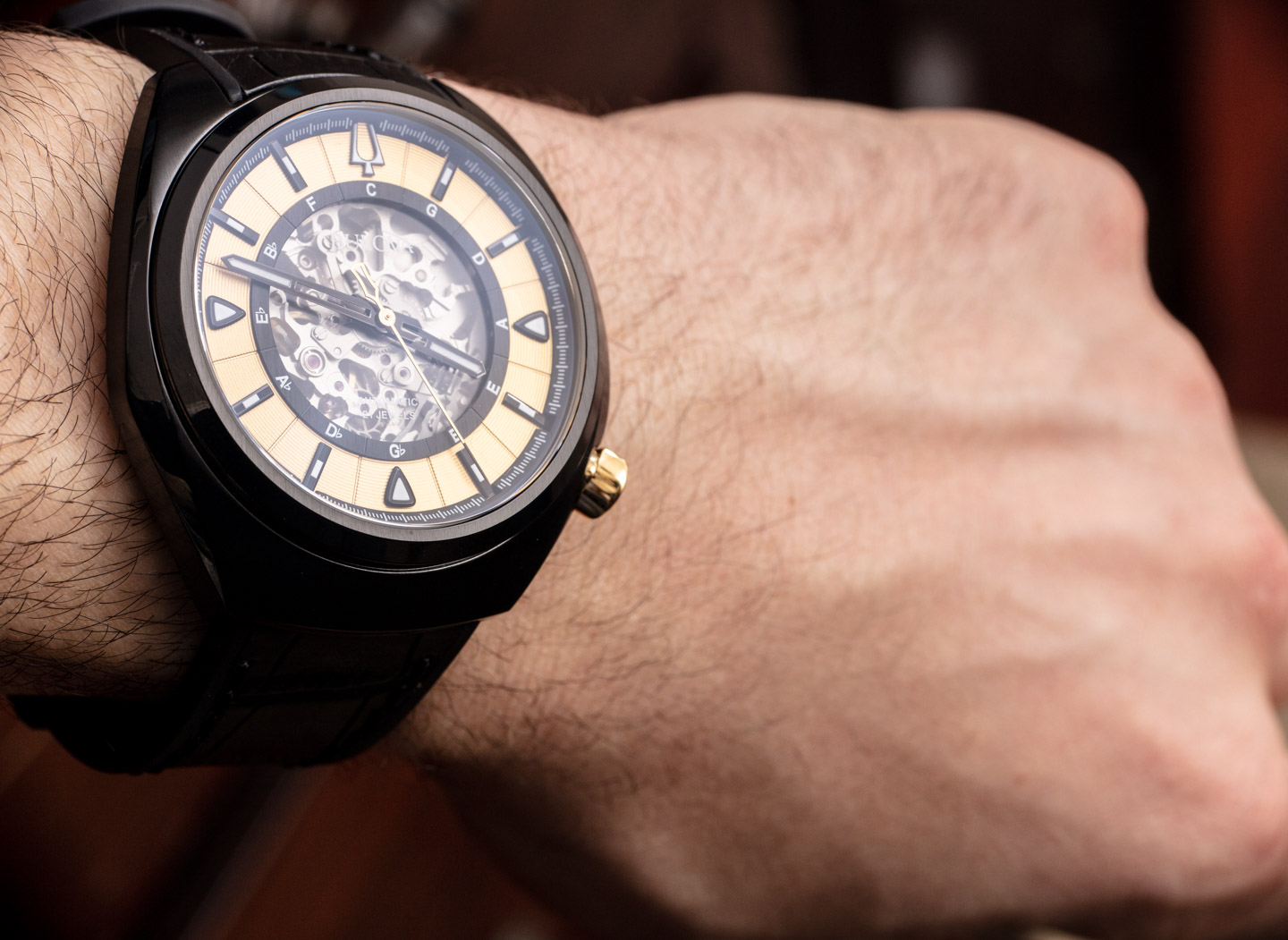 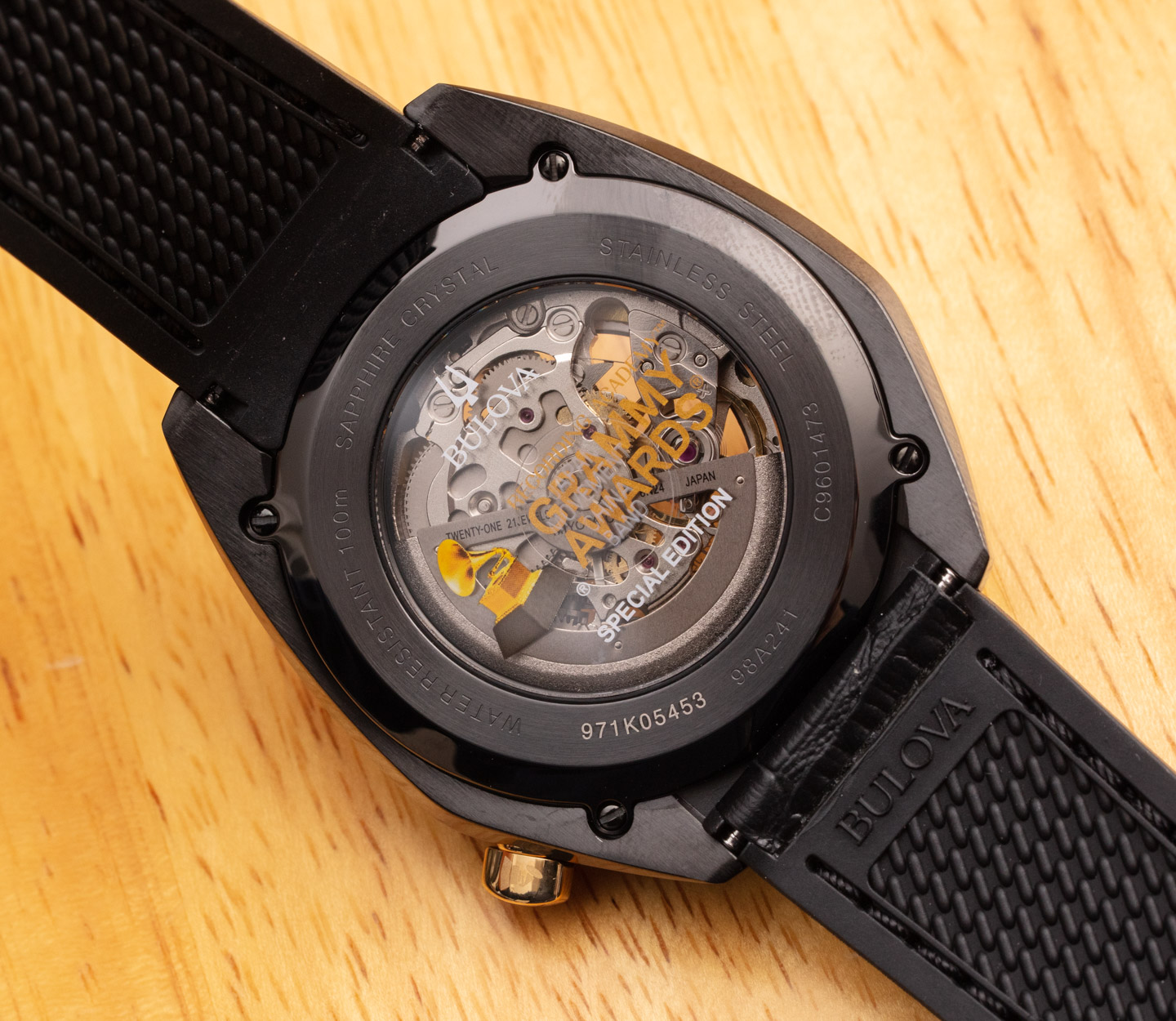 Bulova gave the Grammy watch a funky case design, which here is in IP-coated black steel. The case is round-ish, with flaring sections just below the center line of the case, as well as two different styles of lugs. The top part of the case has traditional spaced lugs, while the bottom of the case has a hidden set of lugs. The distinctive shape along with the crown position at 4 o’clock does a nice job of helping the Grammy watch to stand out when compared to most other timepieces.

The case is water-resistant to 100 meters with an AR-coated sapphire crystal over the top and back. It is 44.5mm-wide and 12mm-thick. The fitted rubber strap has an alligator-style liner which is Hublot-esque and gives the timepiece a more high-end sporty look. The strap comes on a butterfly-style deployant clasp. 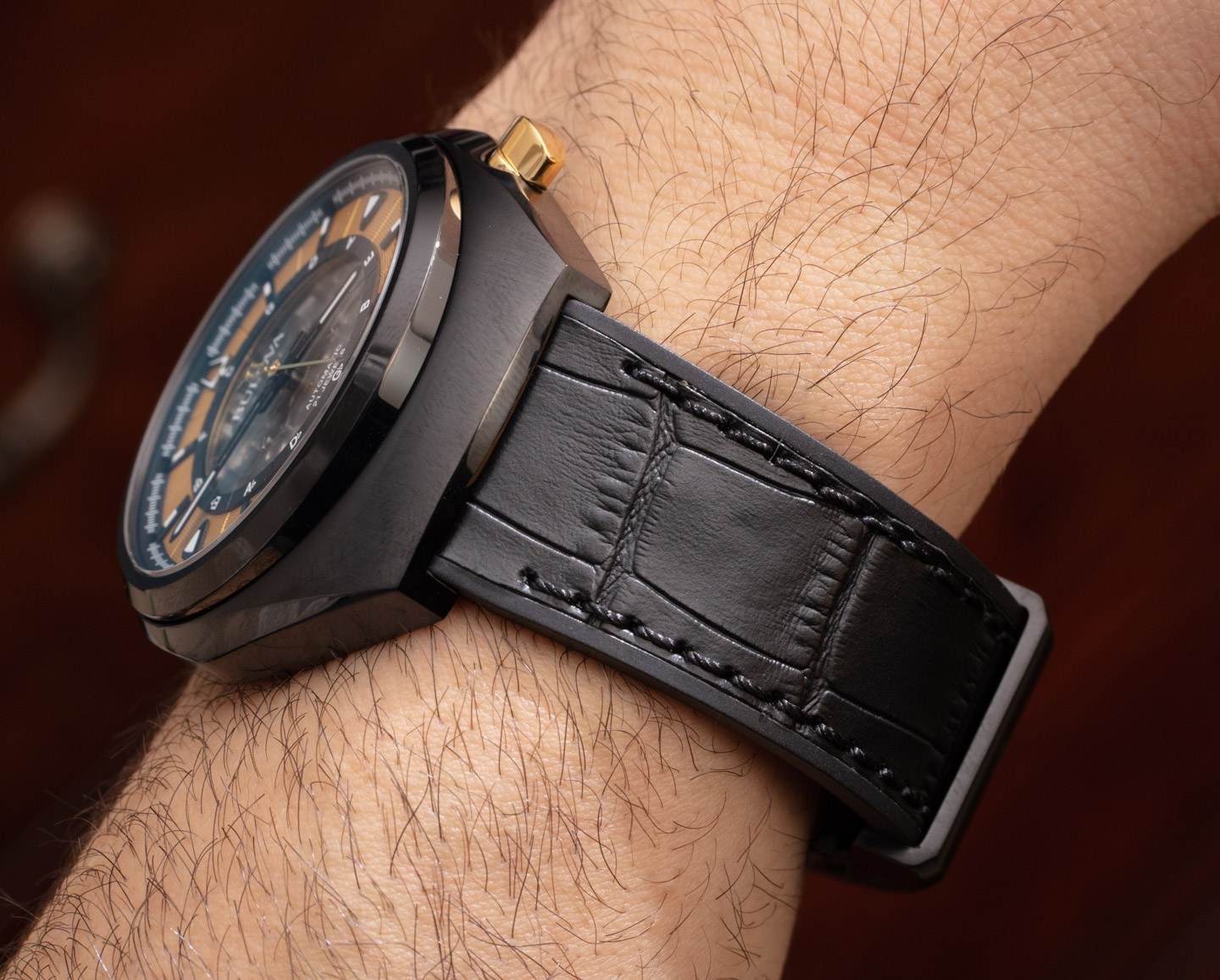 Inside the Bulova Grammy watch is an automatic mechanical movement produced by Bulova’s parent company (The Citizen Group) in Japan. The movement is the Miyota caliber 8N24 automatic, which is made more interesting by its skeletonized design. The Grammy watch dial is mostly translucent in the middle (but not distractingly so), offering a handsome view of the movement in its skeletonized glory. The automatic movement operates at 3Hz with about 42 hours of power reserve. 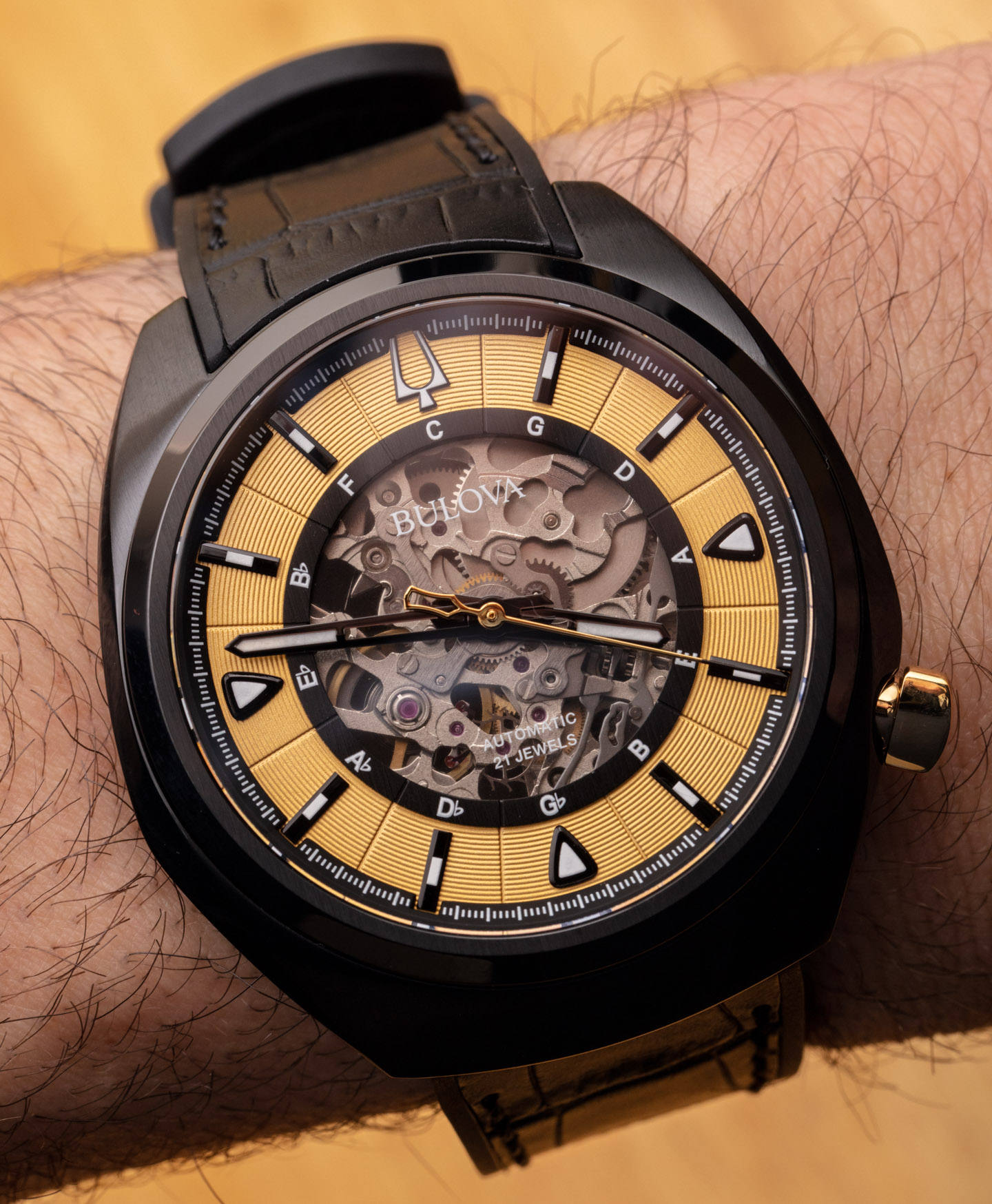 I suppose what I admire most about the Bulova Grammy watch is how traditionally easy it is to live with, while also not having a traditional look. The interesting case, deep and colorful dial, as well as colors that match the Grammy Awards theme, are all pretty nicely done. It also isn’t trying to be a watch for everyone with a design that is bold, on-theme, but also polarizing. Bulova was able to create a relatively affordable automatic watch that does a good job of celebrating its mechanical nature within, thanks to the eye-pleasing effects of the skeleton movement architecture. Price for the reference 98A241 Bulova Grammy watch is $850 USD. Learn more at the Bulova website here.