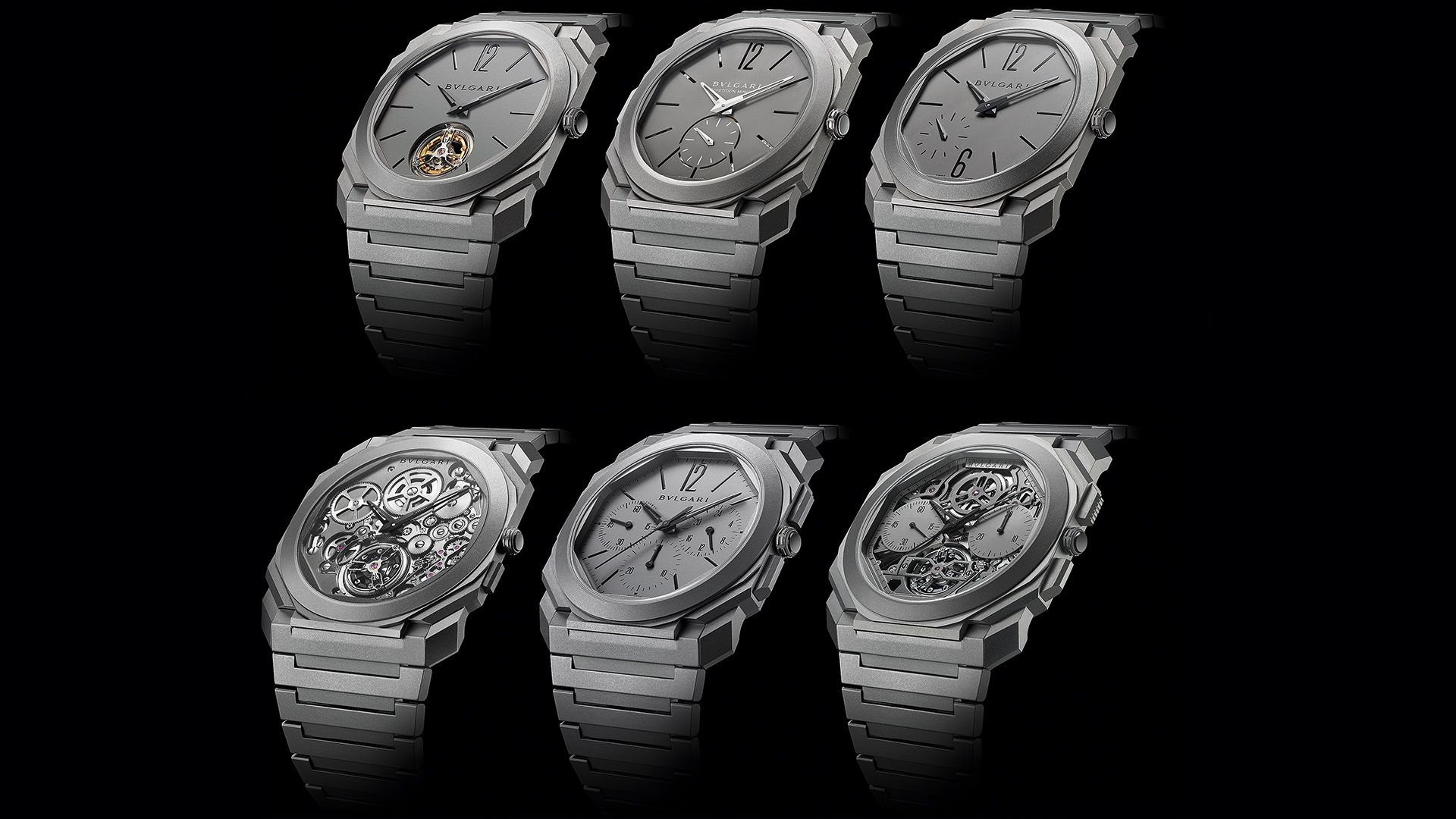 Watchmaking, at its highest form, is a blend of engineering and artistry. While a good timepiece may have a captivating design or an innovative movement, in order to become a true modern icon a watch must exhibit both. Perhaps no other watch line demonstrates this magic combination of evocative forms and cutting edge horology as well or as consistently as the Bvlgari Octo Finissimo series. Since 2014, the Octo Finissimo line has achieved an astonishing six world records for its groundbreakingly thin movements, while continuing to evolve an intricate modernist design language that could only come from Bvlgari. This line of consistently record-breaking and evocative design culminates in the astonishing Bvlgari Octo Finissimo Tourbillon Chronograph Skeleton Automatic, showcasing the thinnest tourbillon chronograph movement ever assembled inside the iconic Octo Finissimo architecture. 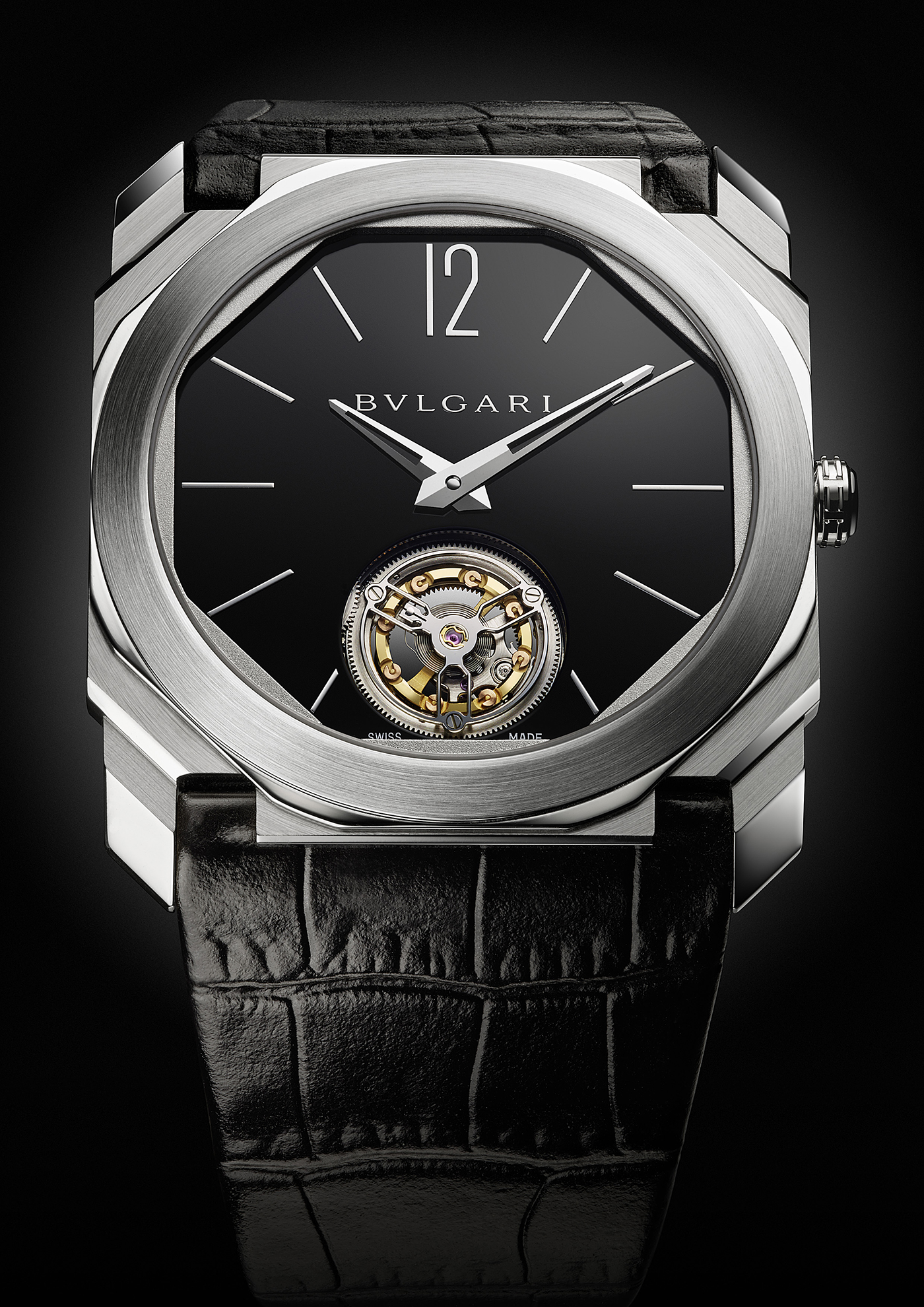 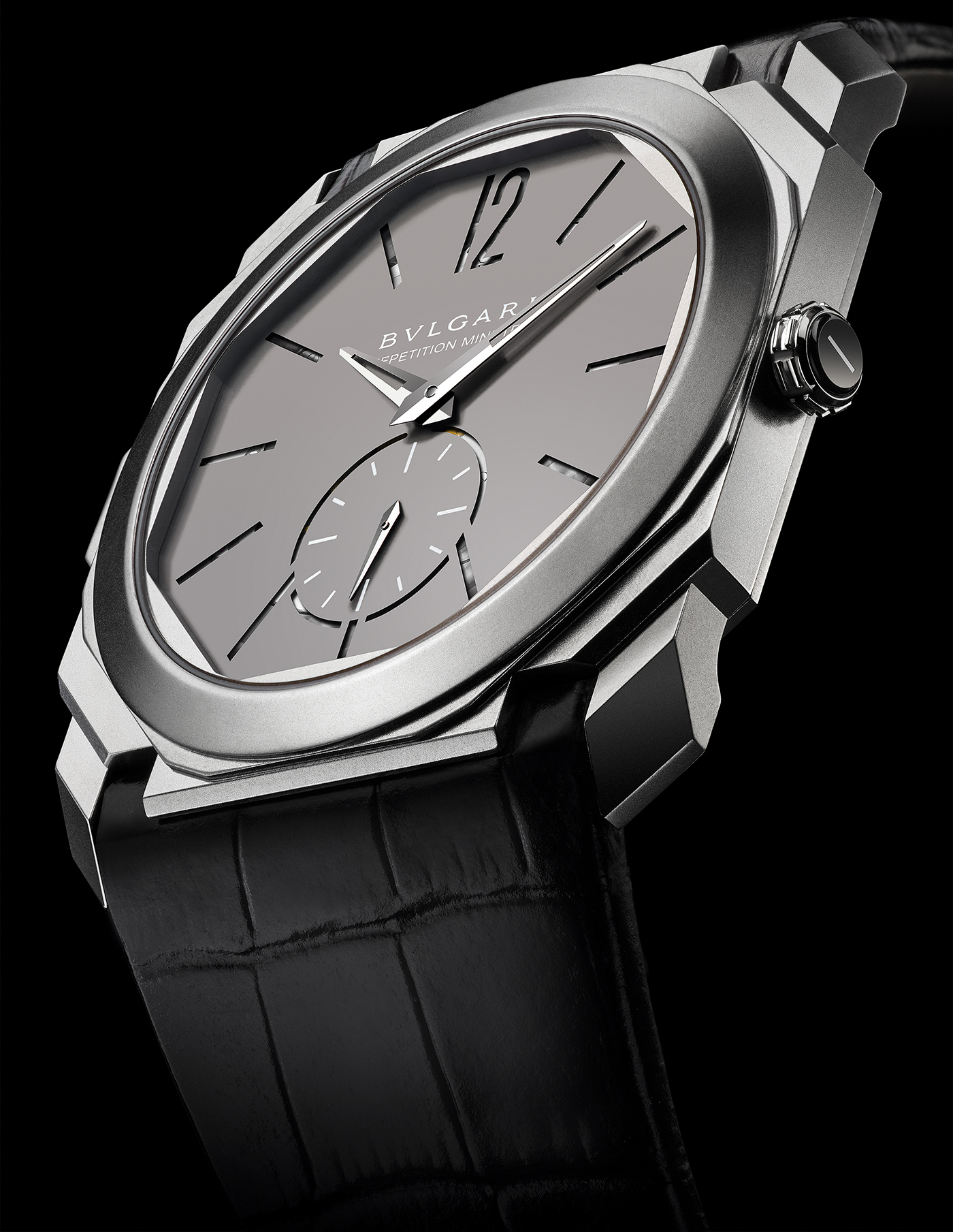 In 2016, the Octo Finissimo saga broke world records for a second time with the Bvlgari Octo Finissimo Minute Repeater. The manufacture BVL 362 minute repeater movement within is the thinnest ever designed at 3.12mm, but in order to cleanly integrate this complex and musical complication into the distinctive design Bvlgari uses an unorthodox solution. The instantly recognizable dial surface uses cutouts for its indices, allowing the dial to function like the top of a violin or guitar and amplify the musical chiming within the movement. 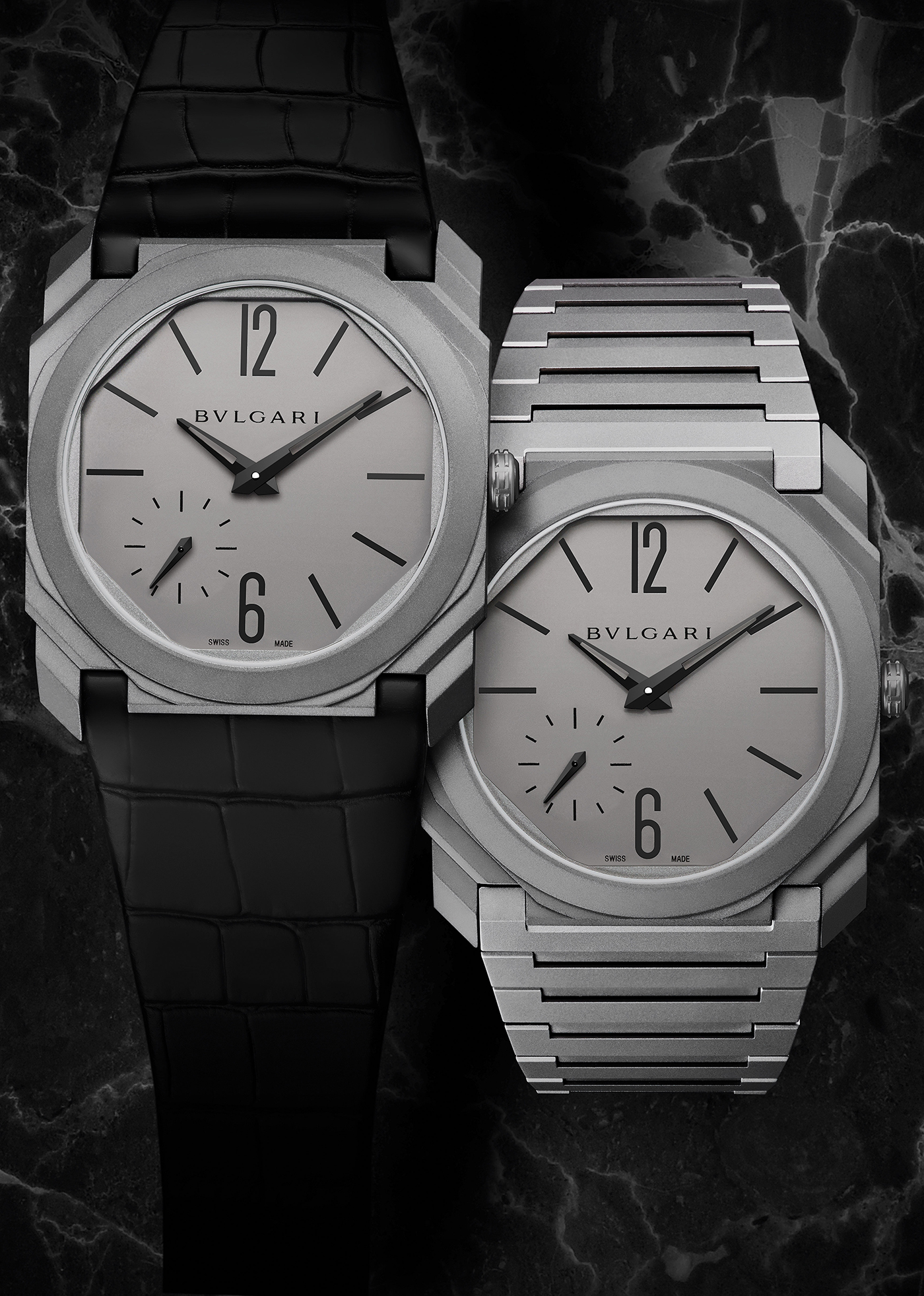 2017 marked the third world record in the Bvlgari Octo Finissimo saga with the release of the Octo Finissimo Automatic. With a total depth of only 5.15mm thanks to the manufacture BVL 138 automatic movement, this was the thinnest self winding watch in the world on its debut, with a clean and elemental design that allows the luxurious and audacious spirit of Bvlgari to shine through brightly. 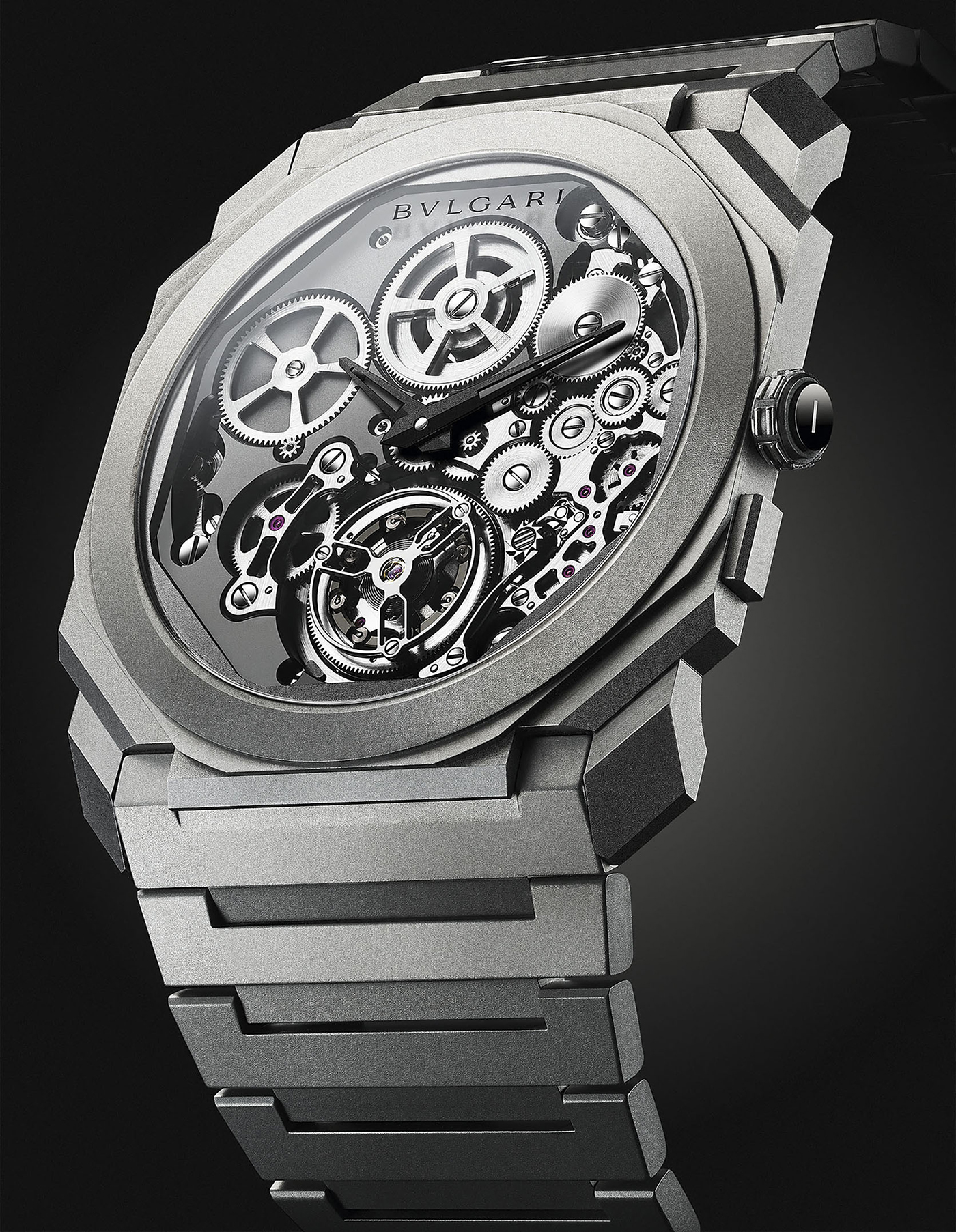 The Bvlgari Octo Finissimo Tourbillon Automatic, unveiled in 2018, marked the fourth world record in the line as it set a new standard at only 3.95mm thick. Thanks to the manufacture BVL 288 automatic tourbillon movement’s peripheral winding rotor, the Octo Finissimo Tourbillon Automatic also offers wearers a fully unimpeded view of the movement through the skeleton dial for the first time. This blend of dramatic forms with the intricate beauty of the movement within creates an entirely new level of drama for the Octo Finissimo aesthetic. 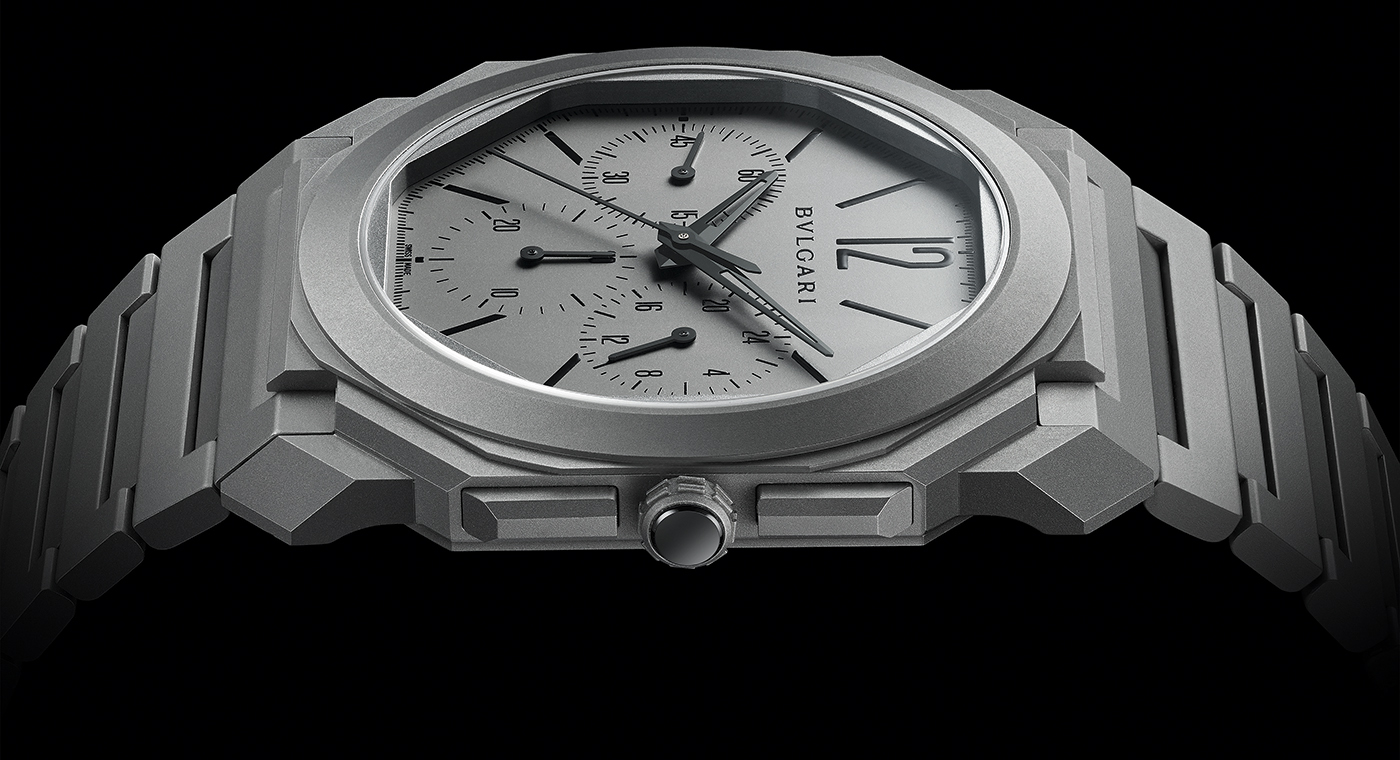 The fifth world record for the Octo Finissimo saga came in 2019, with the release of the Bvlgari Octo Finissimo Chronograph GMT Automatic, the thinnest mechanical chronograph in history. The BVL 318 automatic chronograph movement is not only the thinnest chronograph movement ever made at 3.3mm deep, but also incorporates a column wheel, a horizontal clutch, a peripheral winding rotor, and a second time zone complication into this ultra-thin package. Despite the complexity of the movement within, the Octo Finissimo Chronograph GMT Automatic keeps the dial aesthetic simple, balanced and undeniably Bvlgari with a clean modernist style. 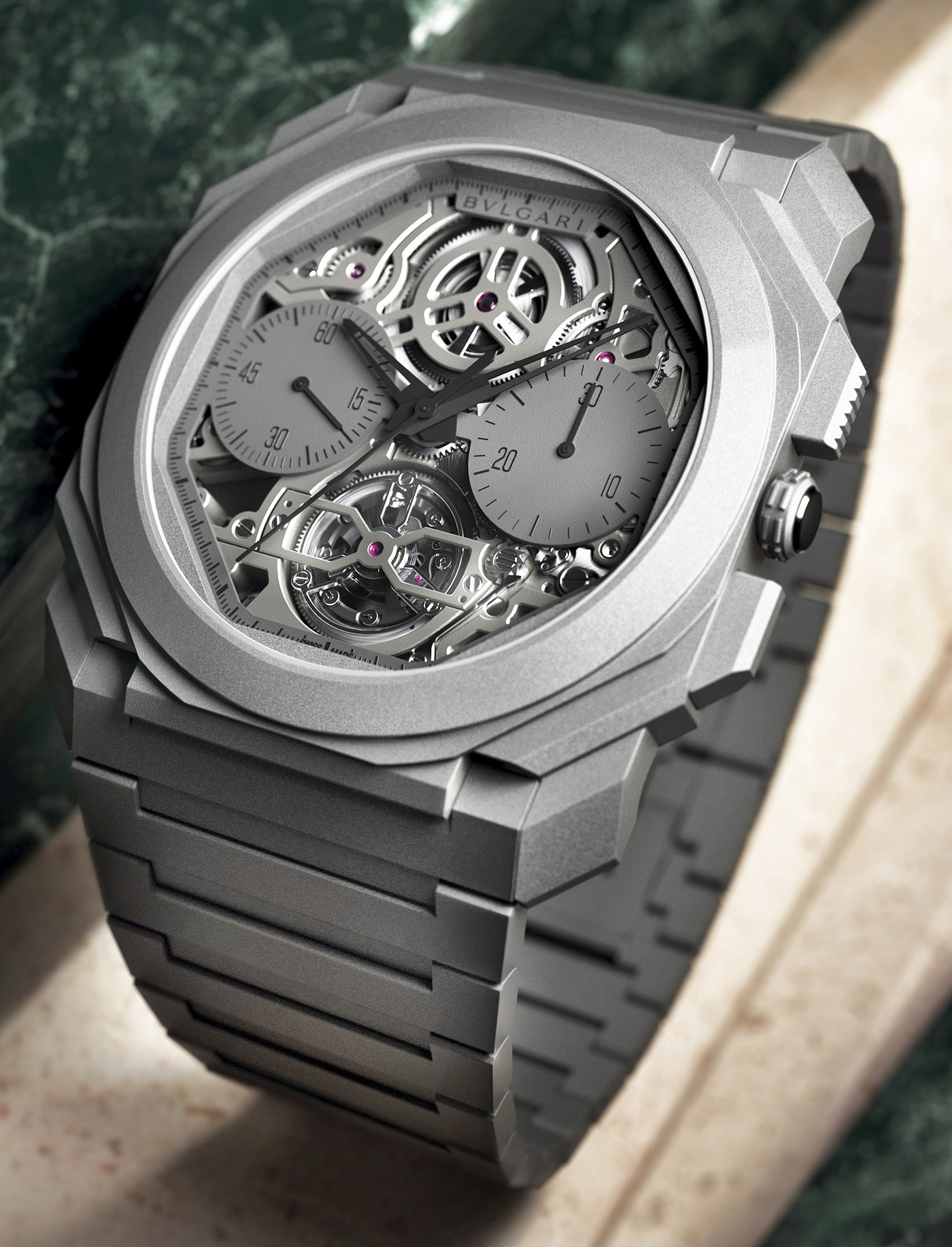 The most spectacular and most recent record broken by the Octo Finissimo’s ongoing saga was released at Geneva Watch Days 2020. The Bvlgari Octo Finissimo Tourbillon Chronograph Skeleton Automatic combines Bvlgari’s ultra thin chronograph movement with a 6 o’clock tourbillon escapement, two register layout, and a fully skeletonized dial presentation. The manufacture BVL 388 automatic tourbillon chronograph movement measures in at only 3.5mm thick, but goes beyond cutting edge engineering to incorporate artistic touches as well. While the dial is skeletonized, the movement is laid out to balance visual weight across the dial for a harmonious look, with the two chronograph subdials counterweighted by the tourbillon at 6 o’clock and the 12 o’clock mainspring barrel. Performance for this movement is exemplary as well, with a robust 52 hour power reserve and a 21,600 bph beat rate. 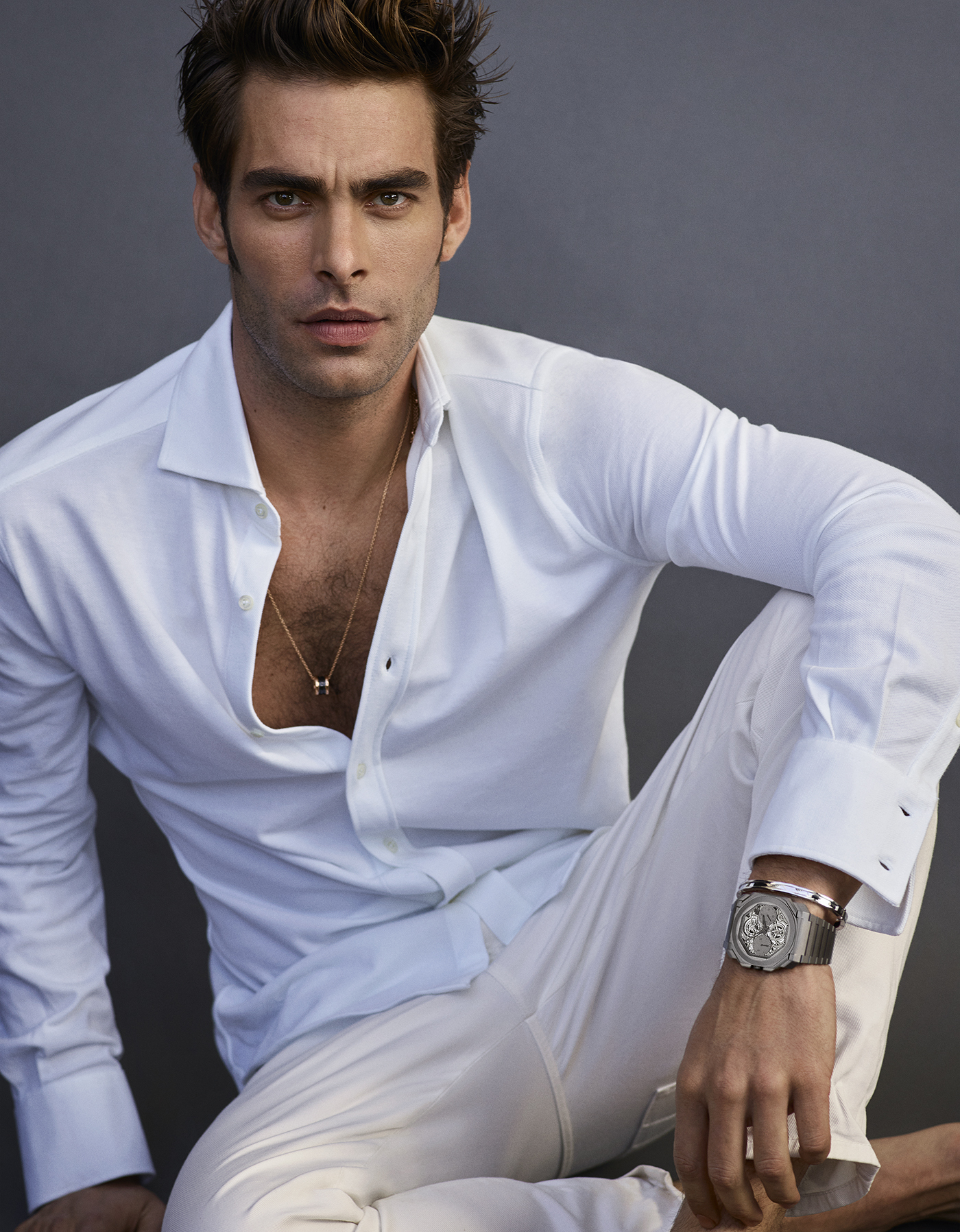 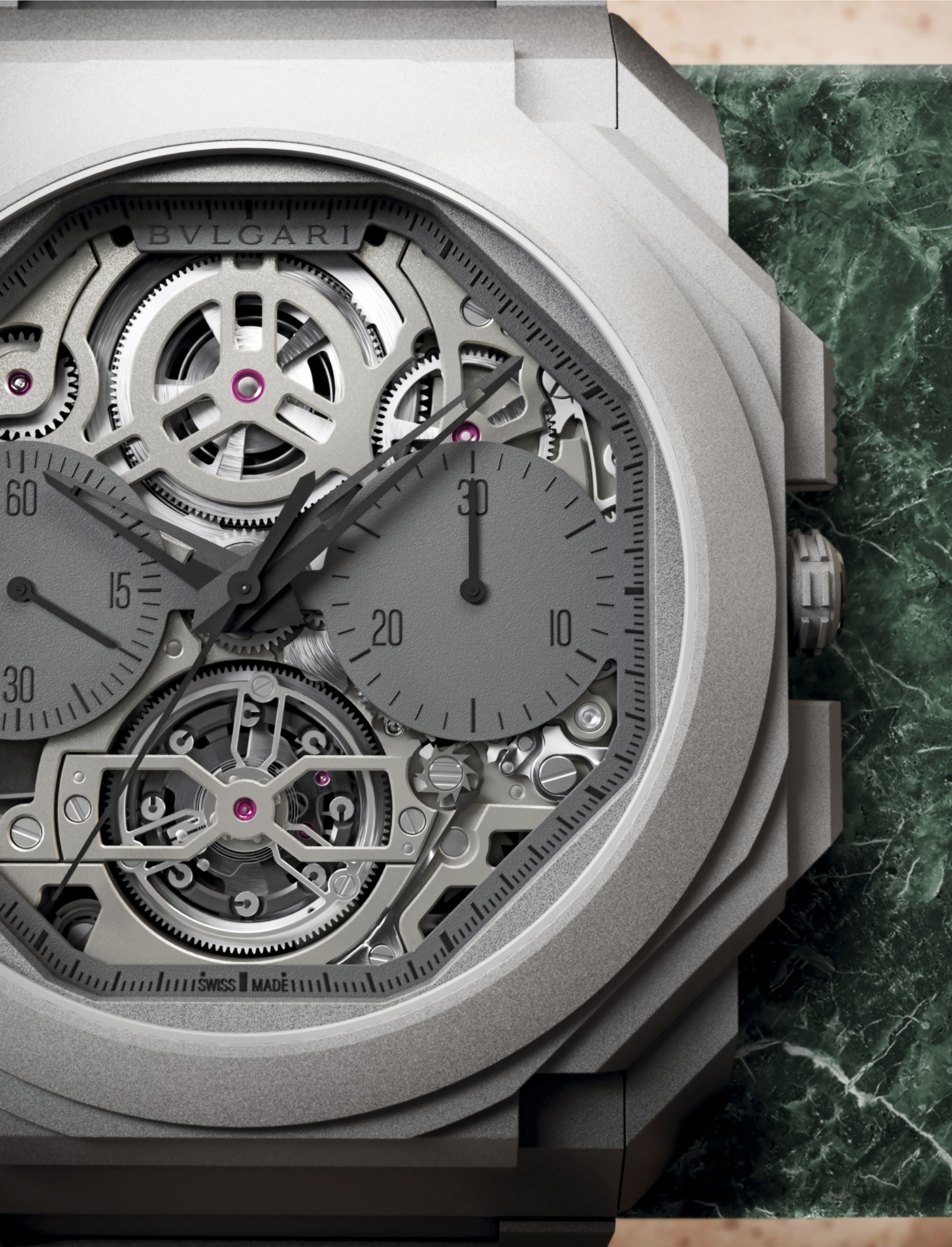 While each iteration of the Octo Finissimo series continues to push the boundaries of watchmaking forward, Bvlgari’s contributions to design are every bit as important to its legacy as a modern icon among enthusiasts. At 42mm wide and only 7.4mm of total thickness, the sandblasted titanium case of the Octo Finissimo Tourbillon Chronograph Skeleton Automatic makes a dramatic and unapologetic statement on the wrist, with a multifaceted angular design that flows effortlessly into a tapering integrated titanium bracelet. The gray on gray aesthetic and signature octagonal dial have become instantly recognizable hallmarks, signaling to connoisseurs and novices alike the bold 21st century spirit of both Bvlgari and the wearer. 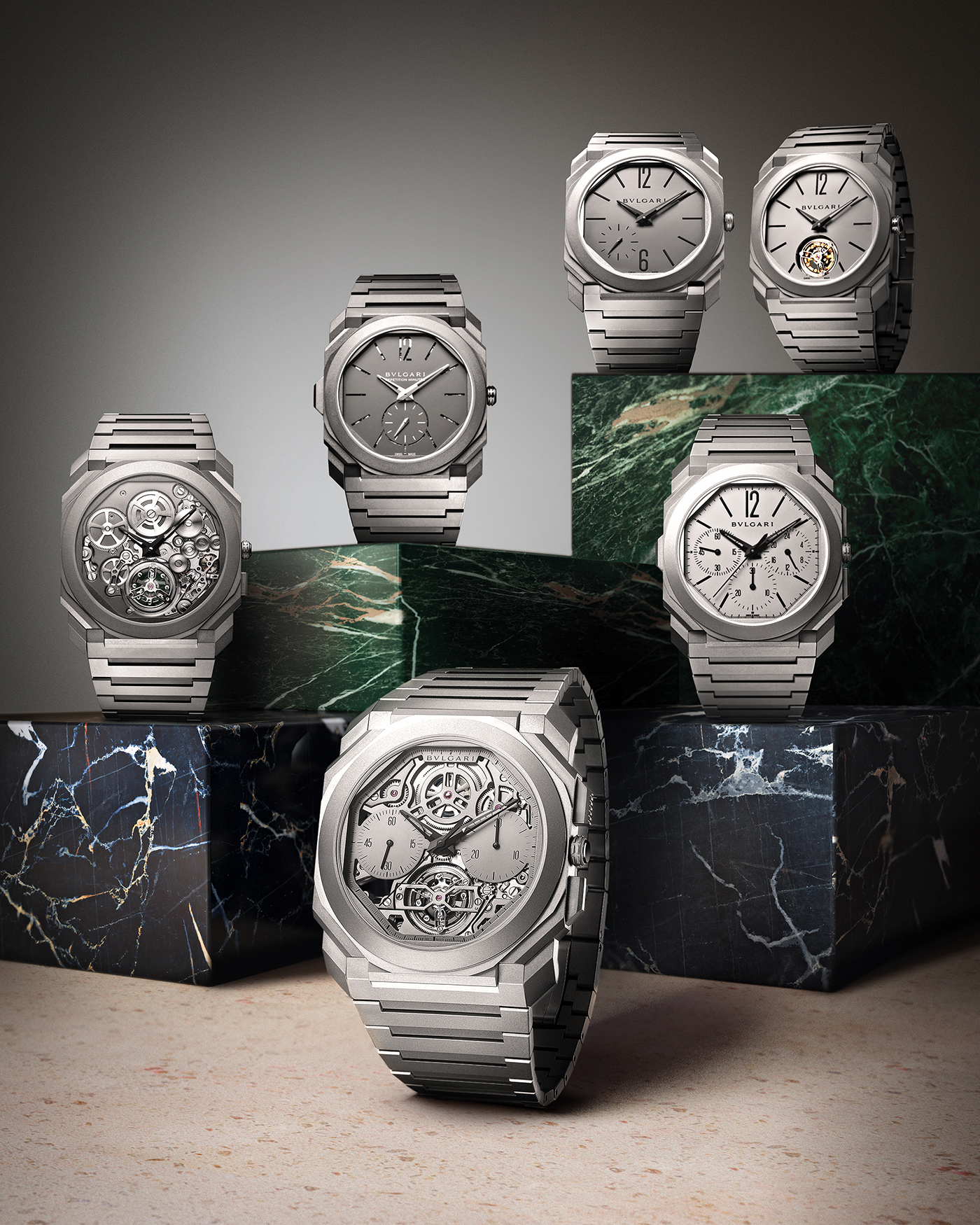 In only a few short years, the Bvlgari Octo Finissimo line has created a saga of both innovation and artistry that few brands can hope to match, and will continue to be a beacon of progress and design for many years to come. For those looking to capture a piece of this ongoing saga for themselves, only 50 examples of the Bvlgari Octo Finissimo Tourbillon Chronograph Sekelton will ever be made, carrying a suggested price of $142,000 through authorized dealers. For more information on the Octo Finissimo and its legacy, visit Bvlgari’s website.