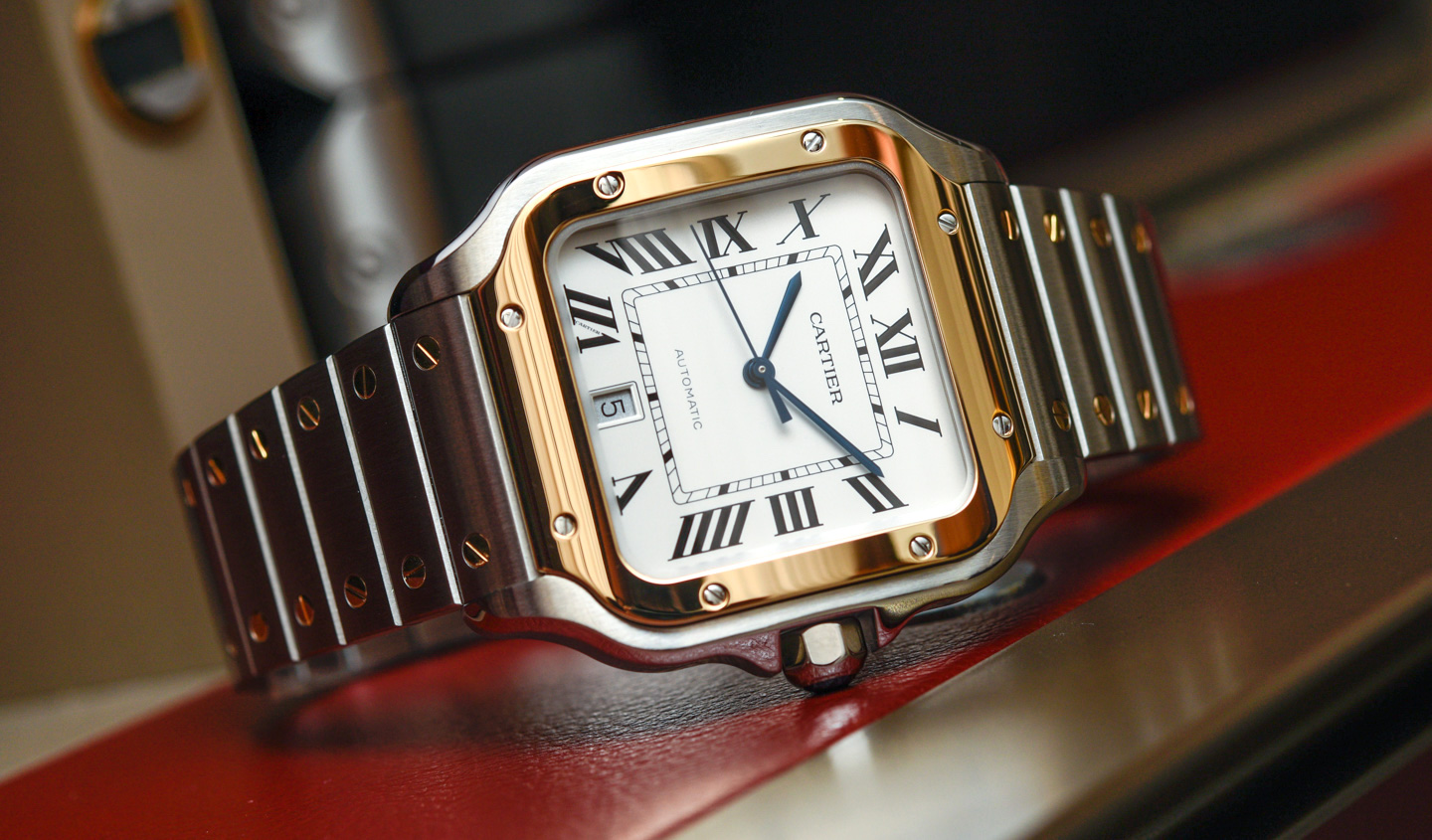 Cartier Santos Watches For 2018 Will Be A Hit With Buyers 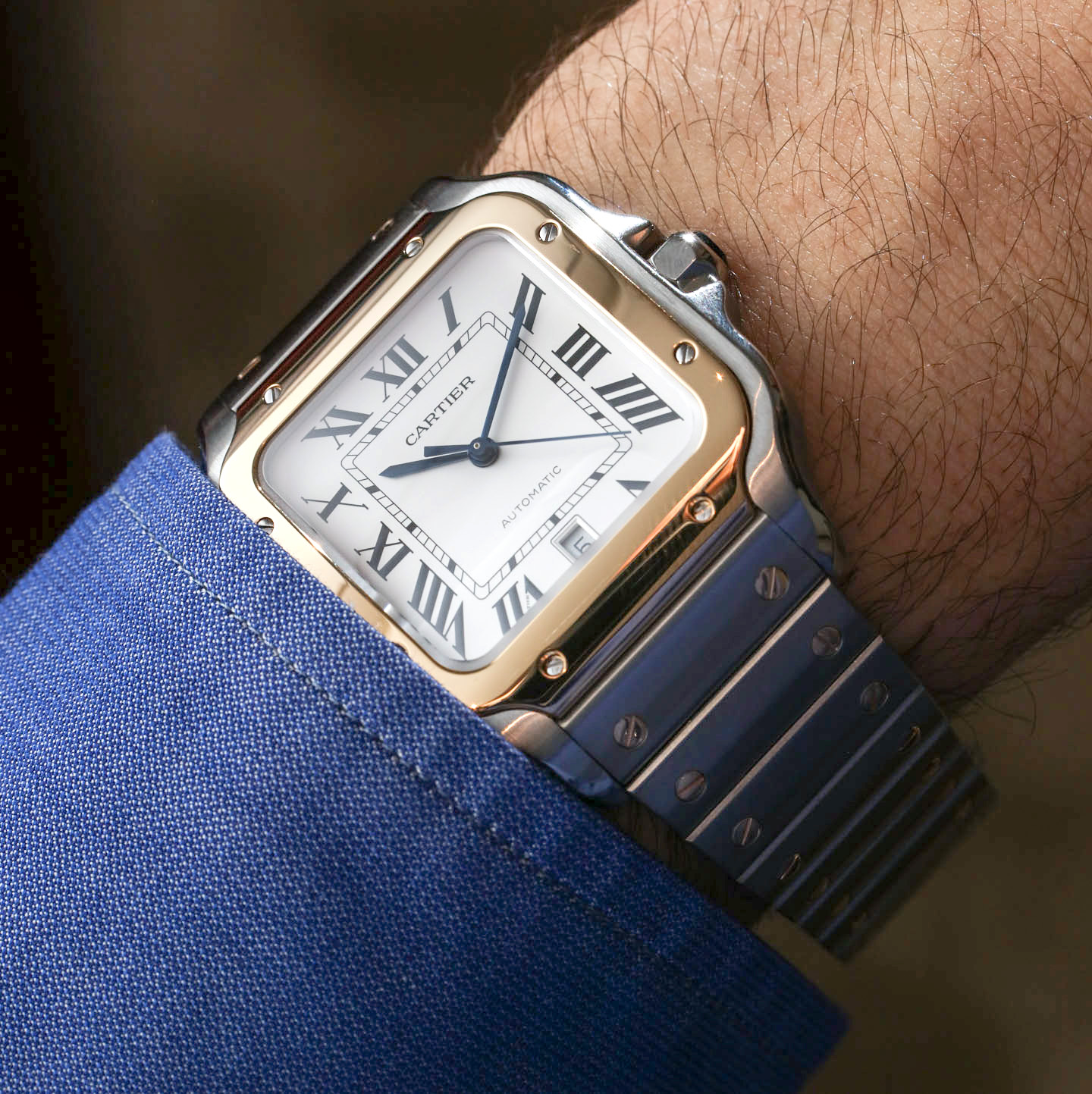 At SIHH 2018 Cartier is positioning the Santos collection as one of their key highlights for 2018 (debuted on aBlogtoWatch here). That means the Parisian brand just released a refreshed version of one of the most famous square-cased watches of all time – born at a time when the wristwatch was an infant in the early 20th Century. The 2018 Santos collection features a lot of exciting new things for one of Cartier’s most important watch collections – as well as a new reason to have interest in a genuine classic. It’s hard for me to say that Cartier improved upon the Santos – because I still feel that the outgoing generation models are pretty special. With that said, Cartier certainly modernized the Santos while making an important part of their brand character appealing to a new group of watch buyers. 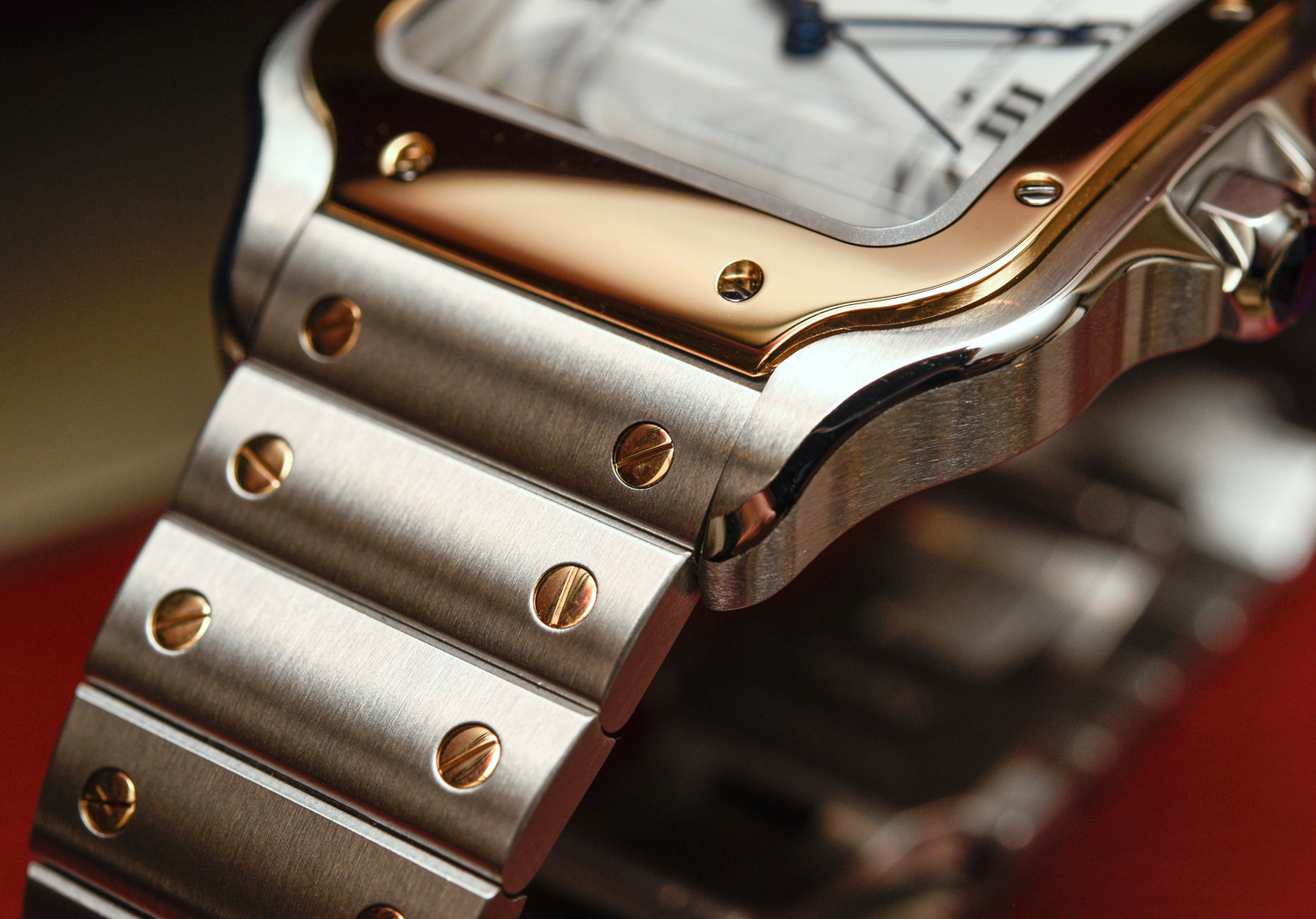 Cartier was pretty excited to share the various models in the new Santos collection with us. The Santos comes in a few styles, as well as two case sizes. There is the 35.1mm wide, 41.9mm lug-to-lug, and 8.83mm thick “Medium” Santos which Cartier mostly intends for women, and then the 39.8mm wide, 47.5mm lug-to-lug, and 9.08mm thick “Large” Santos which is what most men will prefer. Aside from the case size difference, another difference between the Medium and Large Santos cases is the existence of a date window on the dial. It is absent from the smaller model, and exists at the 6 o’clock position on the dial of the larger model. 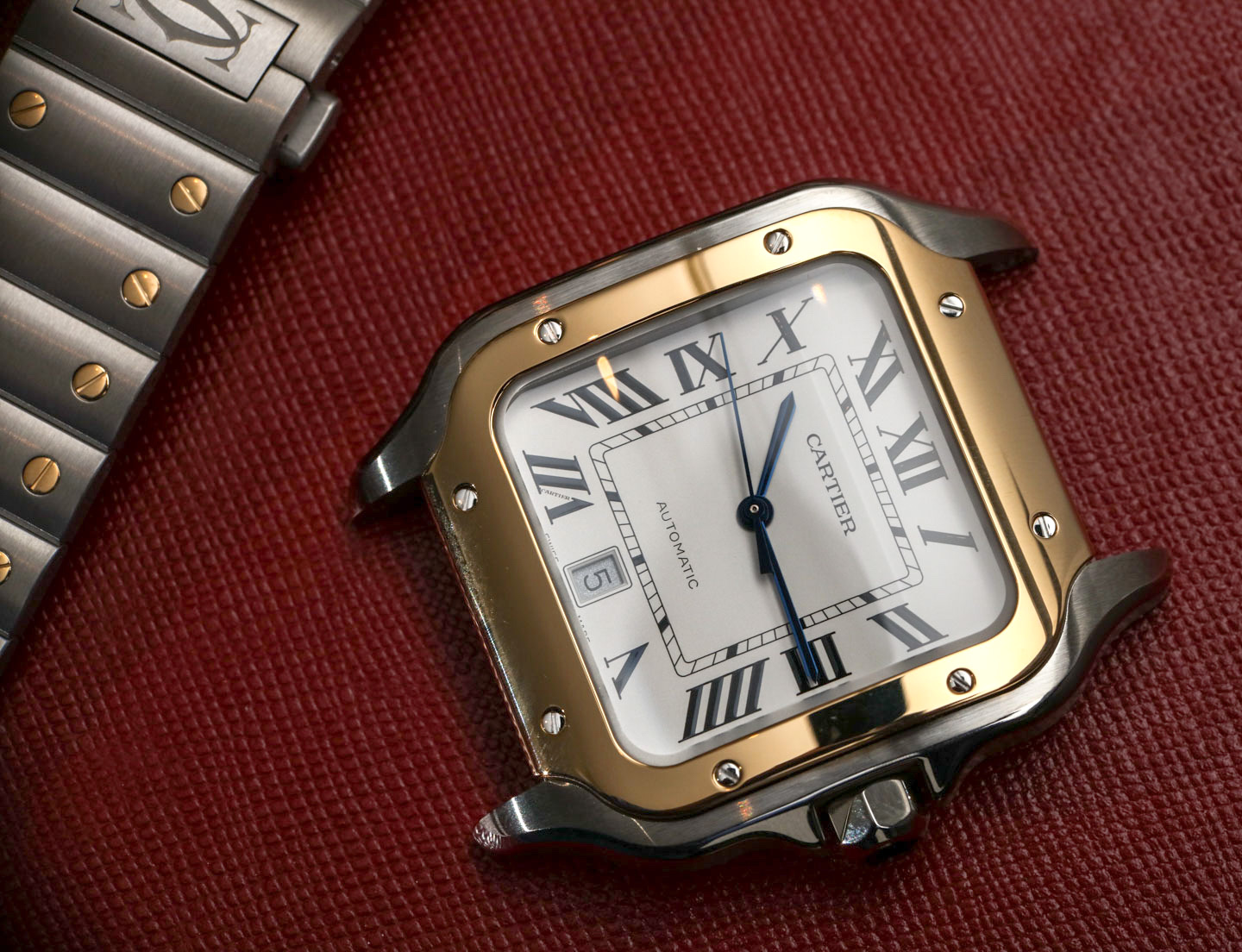 The Santos case has been totally redesigned by Cartier. The most noticeable thing about the updated Santos is how much it has slimmed down. The previous iteration for men was called the Santos 100, or Santos XL. It was the same roughly 38mm wide size, but felt larger because of increased case thickness. There was a welcome masculinity to the thicker, older models, but the new ones are clearly more impressive from an engineering standpoint, and the thinner size means the Santos is again an excellent dress watch choice for men.

Water resistant to 100m, Cartier is also now boasting magnetic-resistance qualities for the Santos. Though this has more to do with the movement than the case. Devotees of the Santos watch will immediately see that even though the overall presentation of the 2018 Santos is similar to previous versions, there are many changes. Perhaps the most visually obvious (aside from the case proportions) is the bezel. No longer is it totally square, but now has “lips” on the top and bottom which are designed to visually connect the bezel with the bracelet design. More on the bracelet shortly. The new bezel is going to be a hit with some for sure, but I can certainly understand some people preferring the outgoing square-style bezel design. 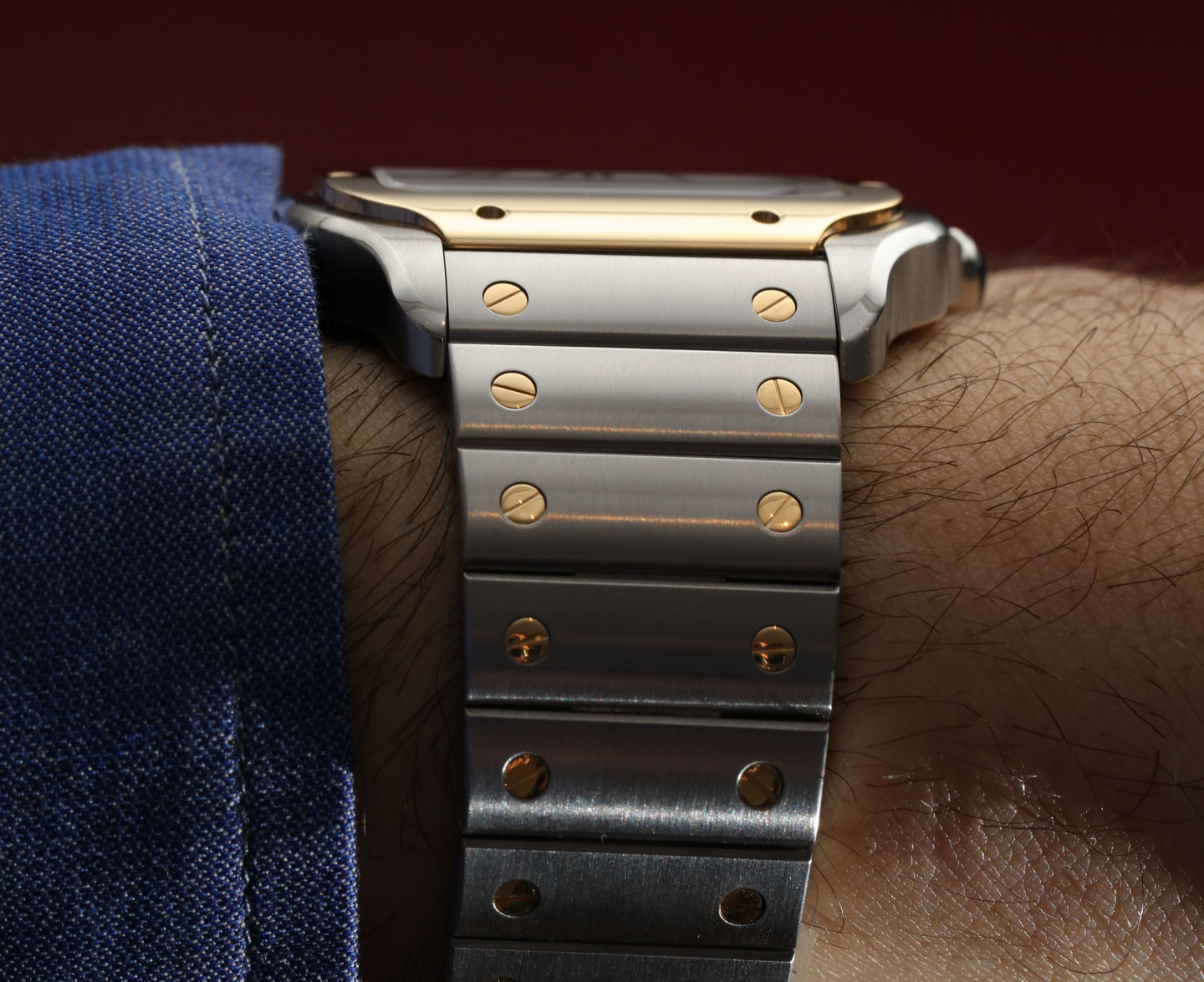 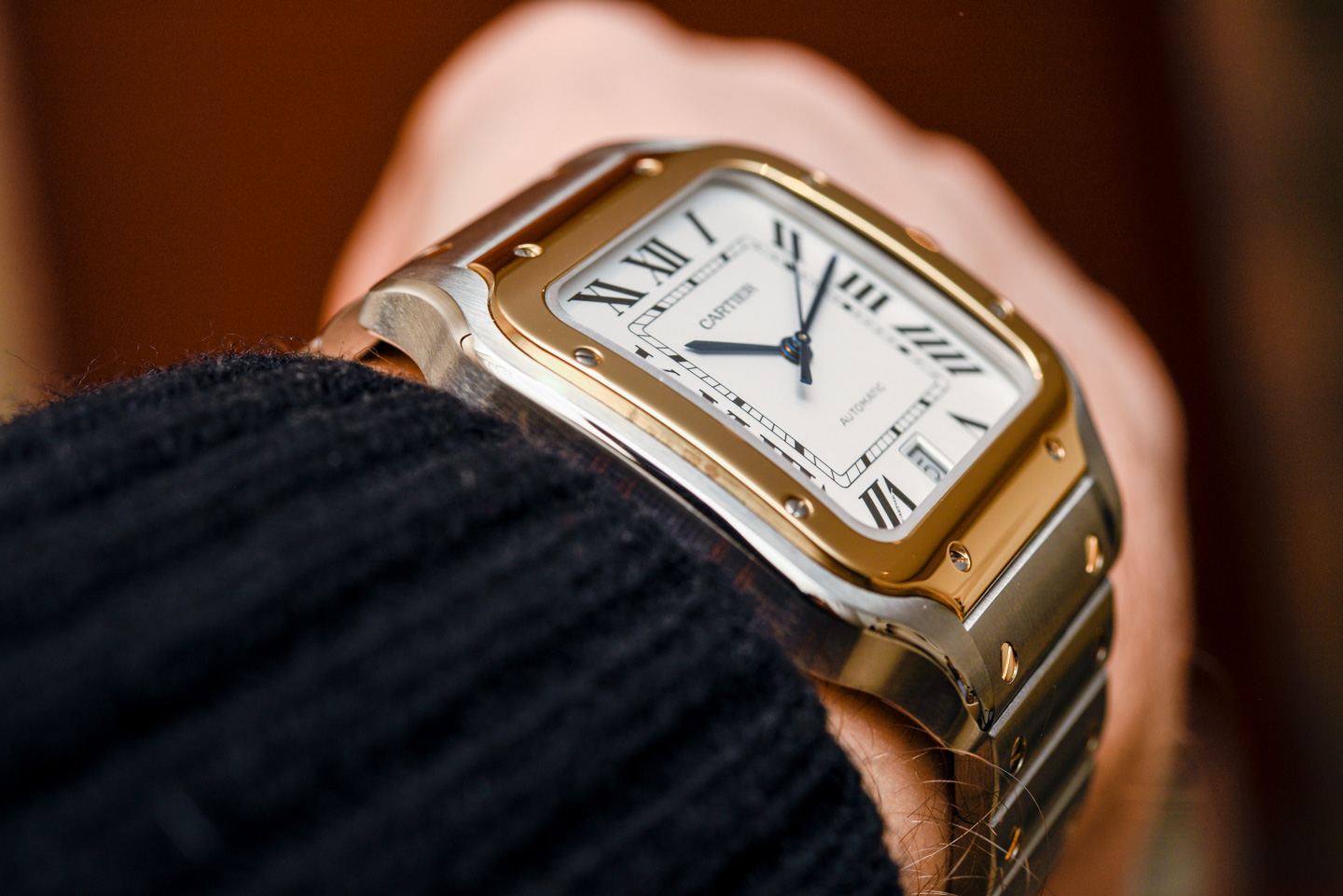 The Santos wouldn’t be the Santos without screws in the bezel and bracelet. This is an element Cartier didn’t mess with, which is a good thing. Born during a time when metal building construction was becoming popular, it was a point of modern industrial pride to have exposed screws on many early 20th century items – including some watches such as the Cartier Santos.

Cartier keeps legibility very high on the new Santos watches because it retains the use of a white dial with black markers and blued steel hands. I have a feeling Cartier will introduce more dial colors in the future, but I doubt any of them will be as legible as this color and texture combination. The blue color of the hands is complimented by the blue spinel cabochon in the crown. Cartier has for a while stopped using sapphire crystals for the crown cabochons with the exception of of their really high-end pieces. 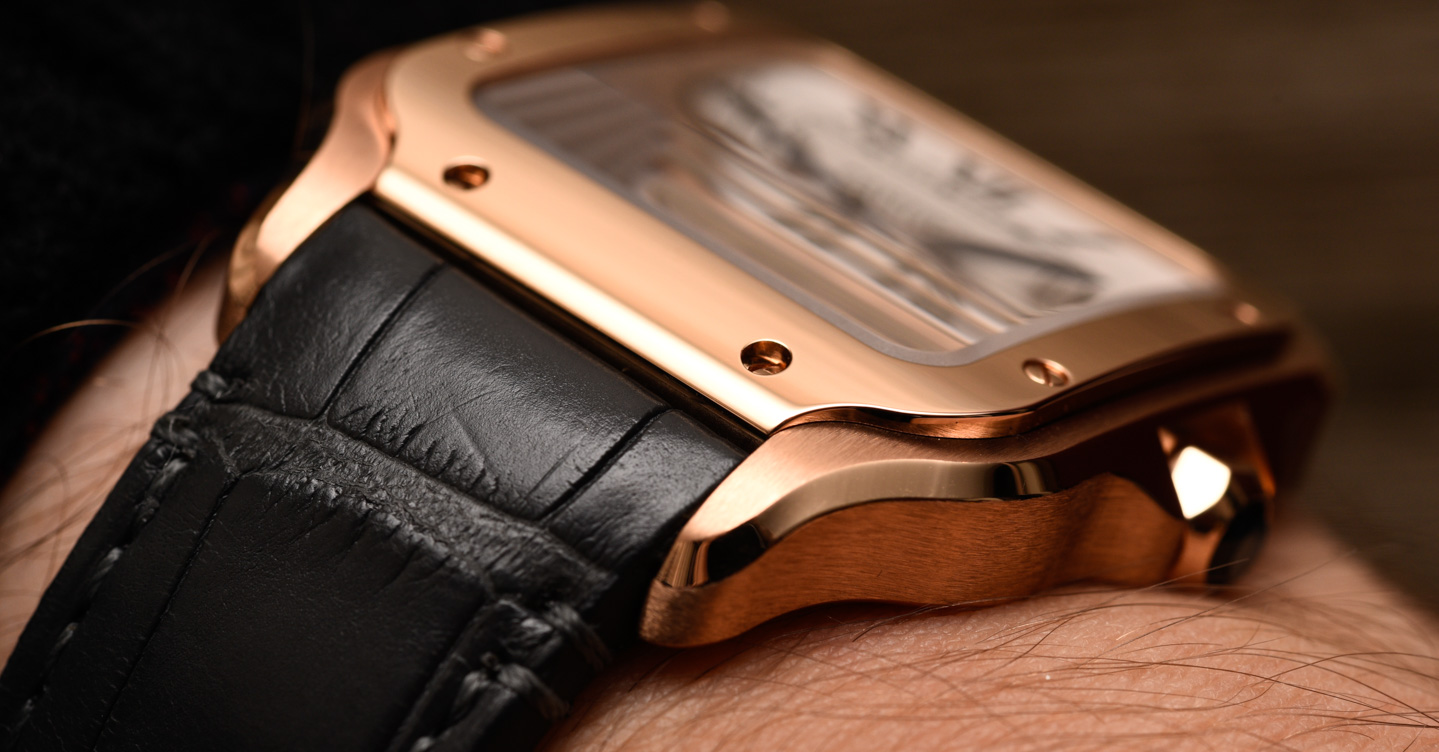 Also new for the Santos collection is the use of Cartier movements as opposed to those from an outside Richemont Group supplier. Now the Cartier Santos is equipped with the reliable Cartier caliber 1847 MC automatic movement. When considering magnetic resistance, Cartier doesn’t use silicon parts, but they do claim to use non-magnetic metal alloys for the escapement and some other movement parts as well as a magnetic shield over the movement. This is part of a new trend in the watch industry to deploy anti-magnetic technology to more and more movements as part of a “relevancy” strategy. Though it is hard not to assume brands such as Omega (with METAS certification) played a big role in pushing this trend. The 1847 MC movement operates at 4Hz and has about two days of power reserve. 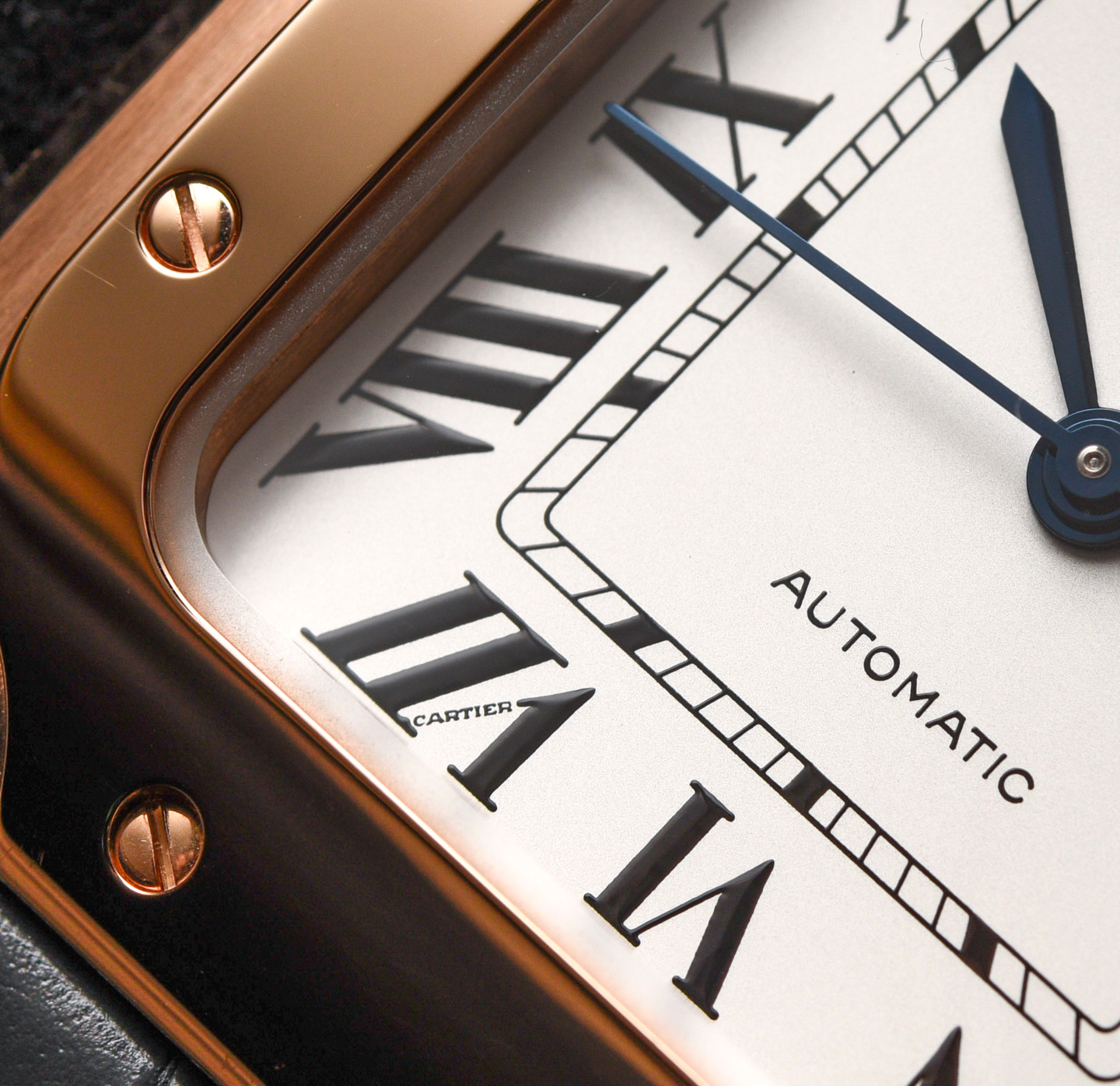 The Santos bracelet has been totally re-engineered as well as reintroduced. Cartier actually hasn’t offered a bracelet on the larger Santos case for a while now, making them available only on women’s models for as long as five years now. Like the thinner case, the new bracelet is also thinner feeling, but retains the look of the classic with its single-piece horizontal links and screws. I do miss the buckle design and slightly more detailed finishing of the old bracelet, but the new systems in the 2018 Santos bracelet are undeniably cool. 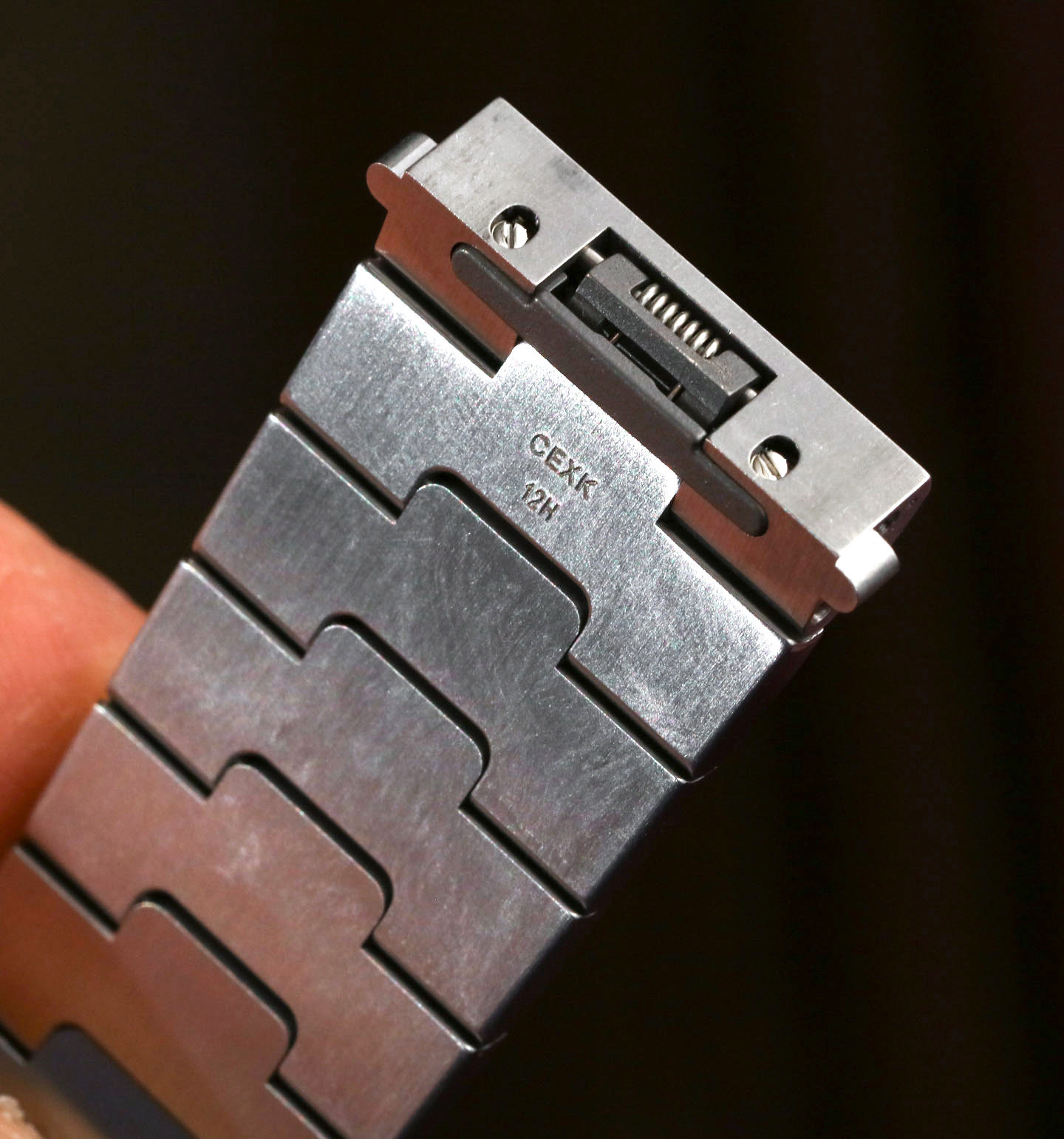 What are those new systems? Cartier calls them QuickSwitch and SmartLink. No, these features aren’t unique, but it is good to see them being deployed in a luxury watch. While Cartier didn’t say it, I think it is safe to say that the new Santos bracelets are deeply inspired by the similar steel metal bracelet for the Apple Watch. QuickSwitch is a bracelet release system that allows you to easily push a button under the bracelet to release it from the lugs. Again, other watches feature this but it is done really well for the Santos and the fit to the case is very secure. QuickSwitch makes sense because Cartier envisions Santos owners changing strap colors as well as from straps to the bracelet on a regular basis. More so, when you purchase the Santos on a bracelet, Cartier includes a leather strap.