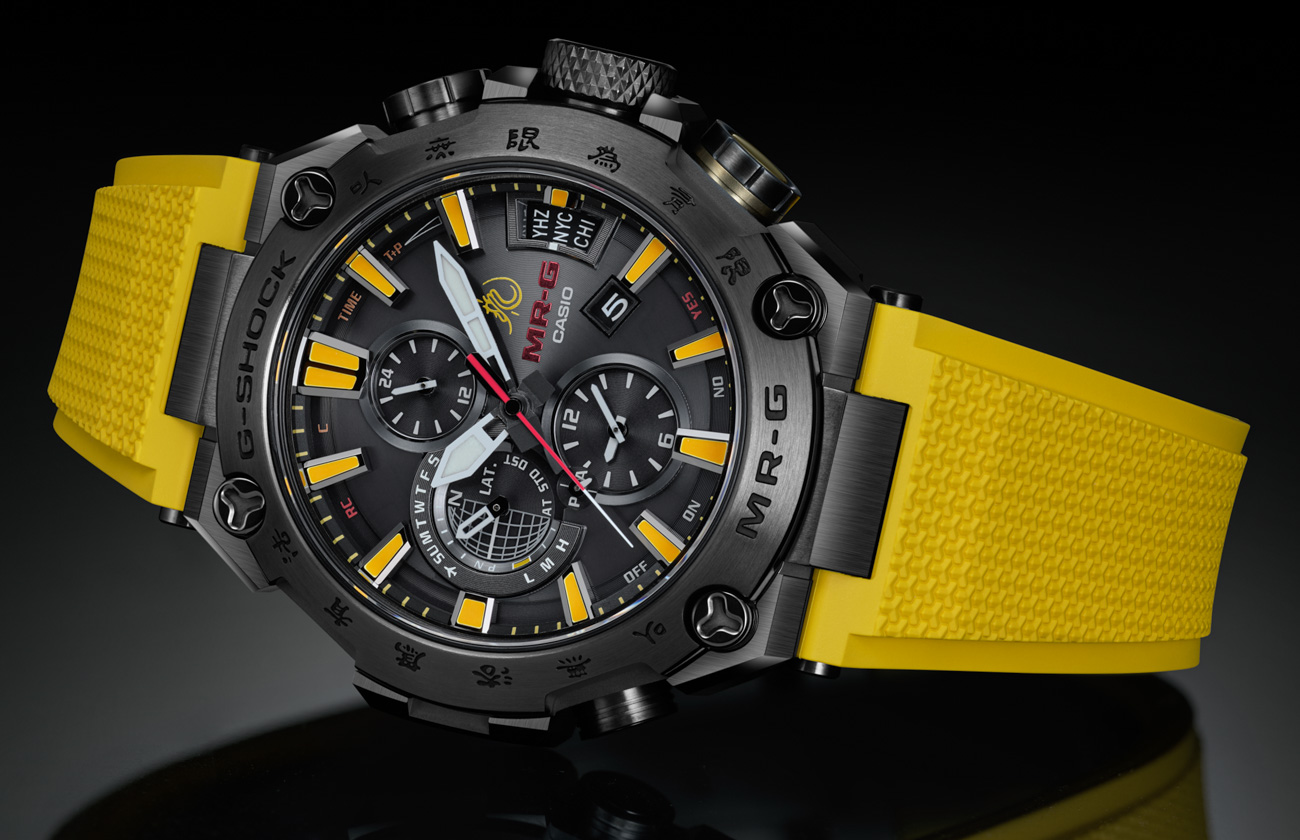 Casio recently announced this high-end limited edition G-Shock MR-G, in attractive black and yellow tones, in honor of Bruce Lee, as 2020 would have been the film and martial arts star’s 80th birthday. The watch is the Casio G-Shock reference MRGG2000BL-9A, which is part of the modern generation MR-G (MRG-G2000) timepiece family that aBlogtoWatch has covered previously in other forms. The GPS and Bluetooth-based movement represents the most sophisticated technology employed in Casio’s analog timepieces, and the MR-G (given its higher price point) is where Casio likes to play with various artistic techniques and aesthetic themes.

Fans of Bruce Lee’s 1978 film “Game of Death” will immediately notice this timepieces’ resemblance to Lee’s famous black and yellow tracksuit. Indeed, Casio’s design team imagined that Bruce Lee would have been able to wear the limited-edition Bruce Lee MR-G watch with that particular outfit. Years later, Quentin Tarantino would pay homage to the black and yellow track suit by placing one on Uma Thurman’s lead character in the Kill Bill films. 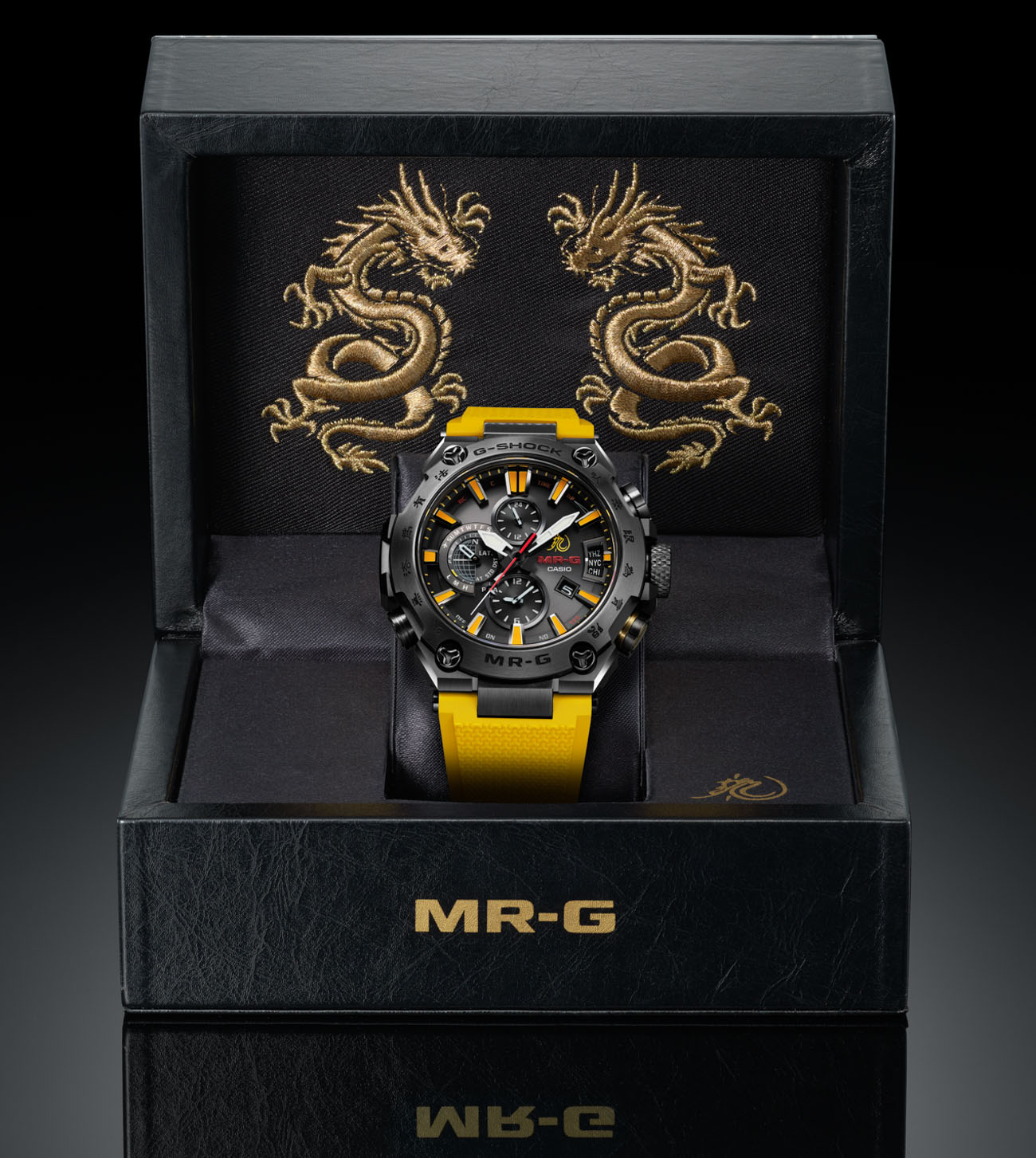 Casio also points to the logo colors of Bruce Lee’s own martial arts discipline known as Jeet Kune Do, the emblem of which is engraved on the year of the watch. The bezel of the MRGG2000BL-9A is further engraved with Chinese characters that state one of the main tenets of Jeet Kune Do, which is, “Using no way as way. Having no limitation as limitation.” 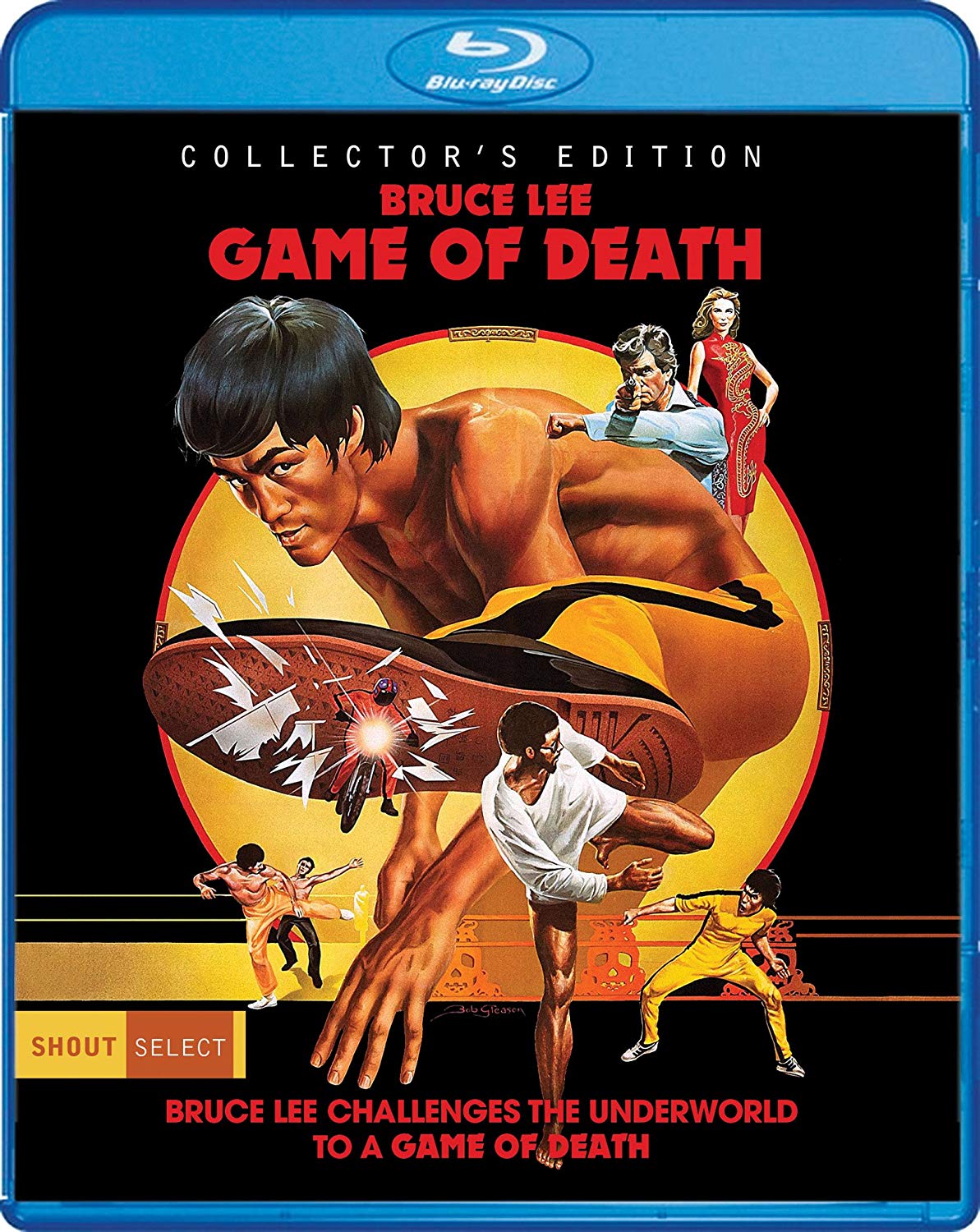 The nearly 50mm-wide case (very wearable), however, is produced from lightweight strengthened and DLC-coated (for color and scratch resistance) titanium. The dark color of the case, along with the yellow/cream color of the hour markers, is attractive. I would, however, have liked for Casio to attempt to match the hands of the watch with the hour markers and luminant color. The hands are actually in a special carbon material that is very lightweight, so it is possible that there were technical issues that prevented them from being specially colored for this limited edition. The watch dial also contains the Chinese character for “dragon,” which was Bruce Lee’s nickname. 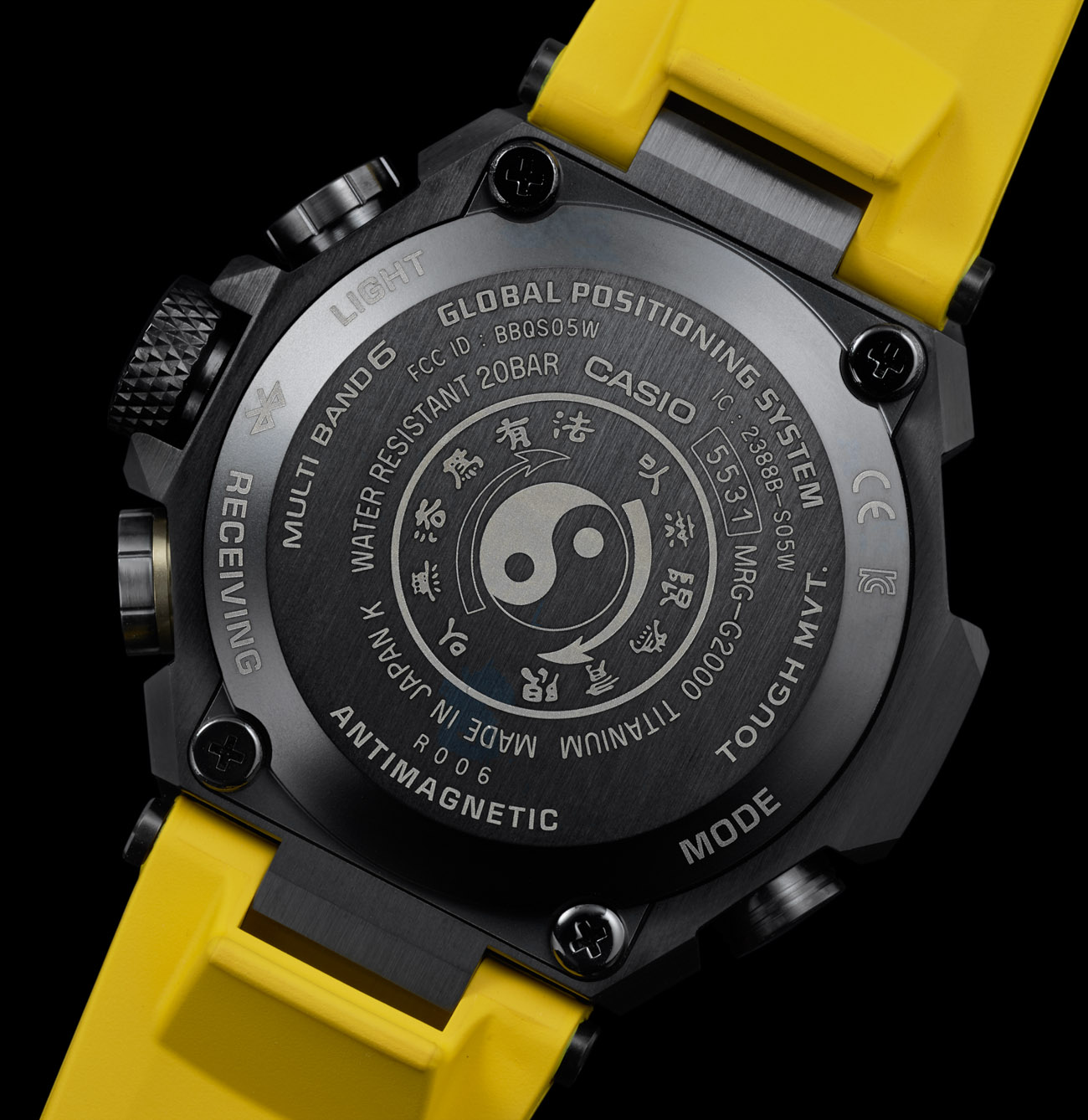 Attached to the case is a strap (as opposed to the metal bracelet we typically find on Casio MR-G collection watches). The yellow strap is nicely textured and uses a matching (with the case) DLC-coated titanium deployant clasp. The strap material is a “dura-soft fluoro-rubber band,” which probably feels a lot like the Apple Watch sport band (not a bad thing). Being among the highest-end G-Shock watches, the MR-G also benefits from a 200m water-resistant case that is topped with a sapphire crystal. Overall build quality is very impressive for this level of G-Shock watch, and all MR-G timepieces are hand-assembled in Japan.

Since we’ve covered the Casio MRG-G2000 collection in other aBlogtoWatch articles, I will not repeat all the piece’s technical specs or the movement’s many features. In short, the MR-G is meant to not only be among the most visually sophisticated G-Shock watches but also an ideal traveler’s watch given the GPS, world-time indication, and automatic time-zone correction features. 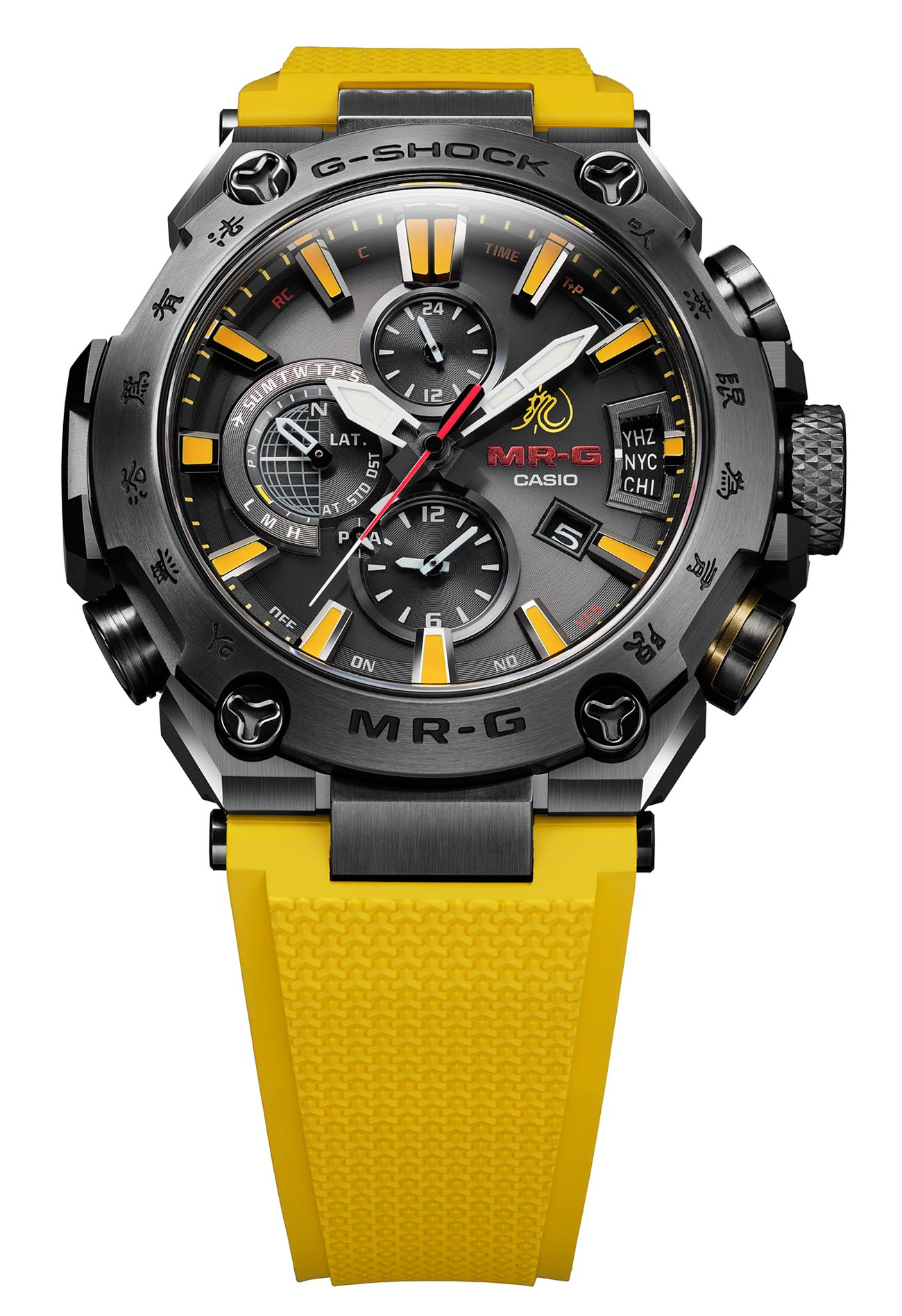 Casio is probably correct that most of today’s Bruce Lee fans are more established consumers and not necessarily the youth market. For that reason, it makes sense to position a limited edition model in honor of him with one of Casio’s most high-end timepieces. I mention this because most of the brand’s limited-edition G-Shock watches are done with more accessibly-priced models. In that regard, the MR-G Bruce Lee is somewhat special. Casio is producing the reference MRGG2000BL-9A as a limited edition of 300 pieces, including a special presentation set. Price for the Casio G-Shock MR-G Bruce Lee is $4,000 USD. Learn more at the Casio website here.