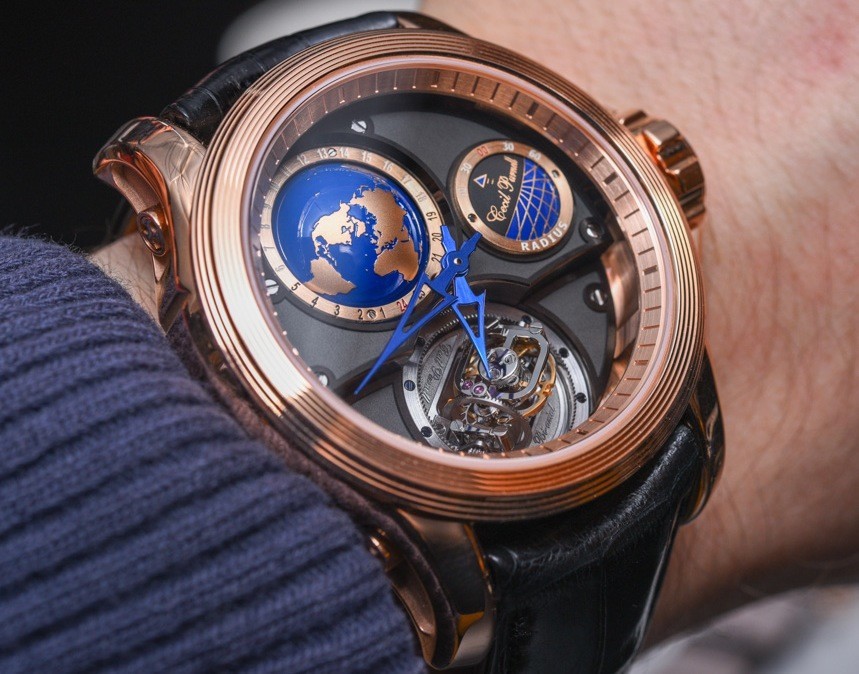 It’s good to be different. The Cecil Purnell V17 World Time Bi-Axial Tourbillon is the latest offering from a brand full of head-turners. Cecil Purnell watches look like nothing else on Planet Wrist. You can see flashes of Jacob & Co. in some of the dials, Roger Dubuis in some of the skeletonization, Zenith in some of the complications, but hardly anywhere else will you see this bizarrely beautiful mishmash of technical and artistic endeavour all in one watch. And it all comes from a good, wholesome place. In a world of multinational conglomerates, rapacious industry behemoths, and long-established horological heavyweights, Cecil Purnell is run by Jonathan Purnell, the actual grandson of the company’s founder. 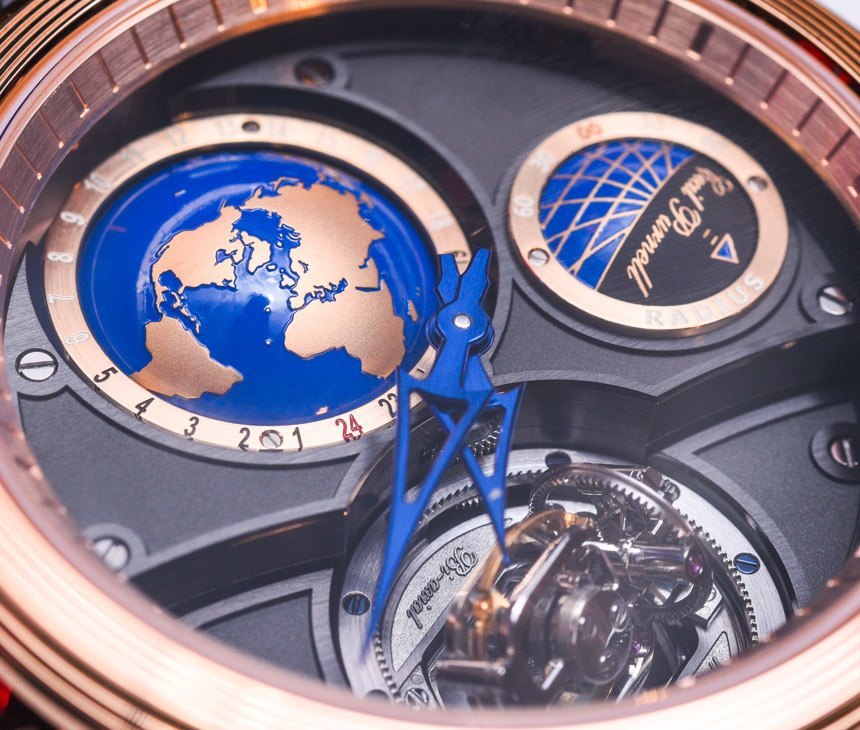 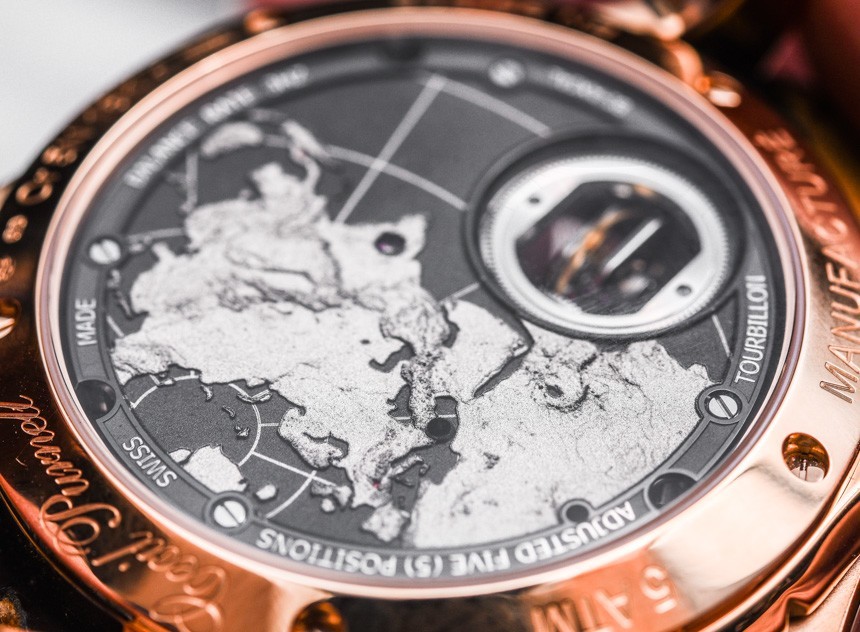 Cecil Purnell founded the company in 1918. His passion for mechanical devices rubbed off on his grandson, who, as a visible spokesman for the brand, is unapologetically ardent about the creations made in the name of his grandfather. And so he should be. Cecil Purnell create timepieces that will generate an opinion, and very likely a strong one at that. But it wasn’t always this way. The company had much humbler origins and interests until 2006, when Jonathan Purnell formed an alliance with watch industry professional Stéphane Valsamides, and launched Cecil Purnell SA in the Jura Mountains. It was only a matter of time before watches like the Cecil Purnell CP-V17 World Time Bi-Axial Tourbillon were rolling off the production line – but we probably should not call it that, as “CP” is more of a micro-manufacture than anything else, with a small workshop in Geneva, and with a reliance on a number of select Swiss suppliers to obtain different movement, case and other components 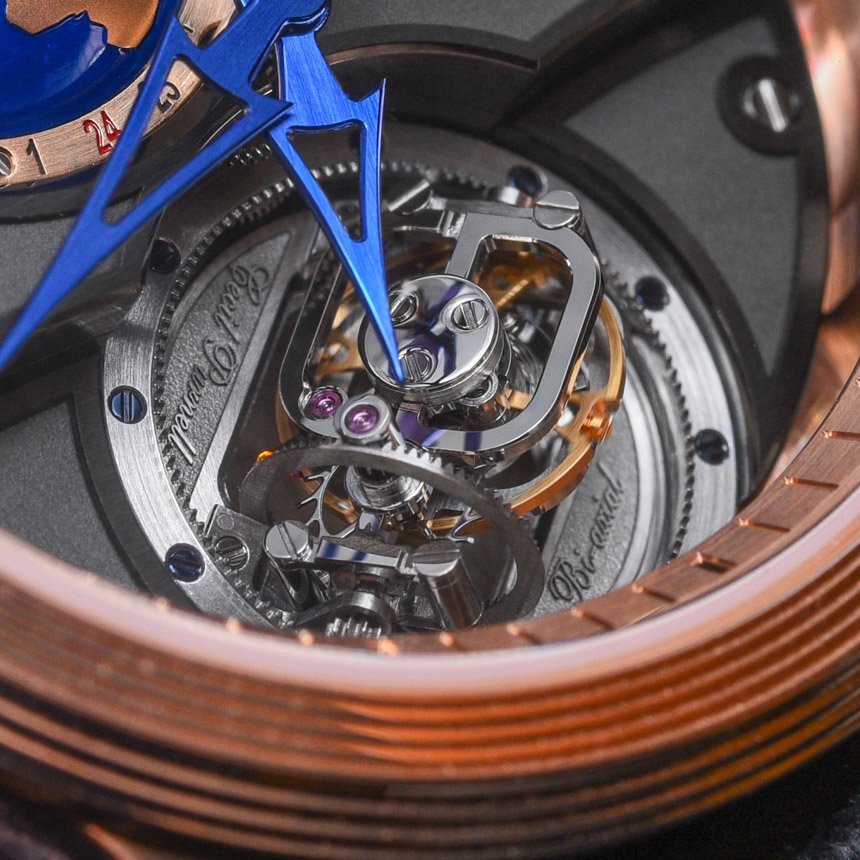 Quite aside from the fact that every Cecil Purnell features a tourbillon (a differentiating factor like few others), the way in which this most beloved complication is presented is very unusual. In previous models, such as the LaCroix and the Lucky Lady, the case shape has been a cross (totally off-the-wall), and in the Pit Lane range, the case has more overlapping shapes than Guernica and is almost as austere. With such radical housings it is possible for the tourbillon to go unnoticed. When you stick a couple of rarely seen complications right next to it, you may not even glance its way! 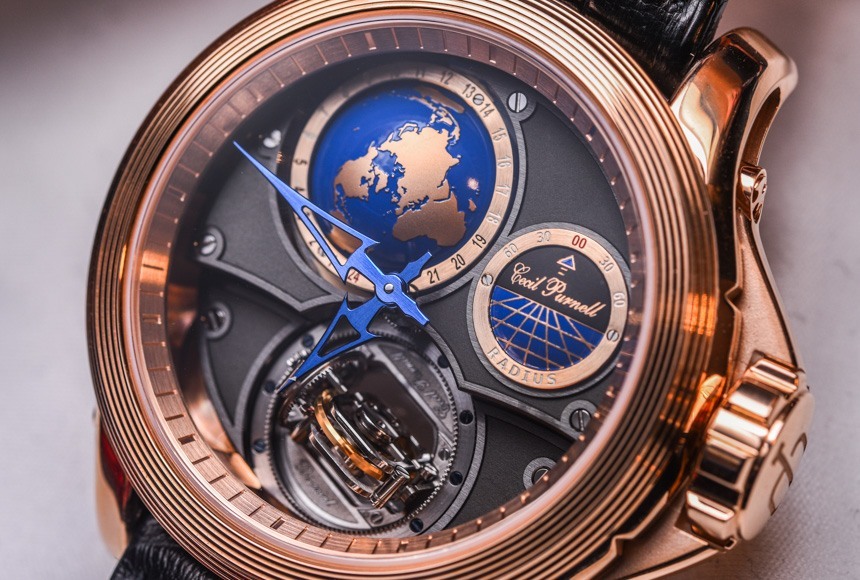 That’s the case with the new Cecil Purnell CP-V17 World Time Bi-Axial Tourbillon, which features a tourbillon (obviously) alongside a very nicely rendered 3D world time display, and an artificial horizon indicator, which really has to be one of the coolest and most useless complications I have ever seen. Maybe useless is a bad word. I’m pretty sure you could use it as a spirit level when you’re putting up some shelves, so on that front it is a bargain (why buy a watch and spirit level when you can get them in one convenient package for a few hundred thousand dollars?). 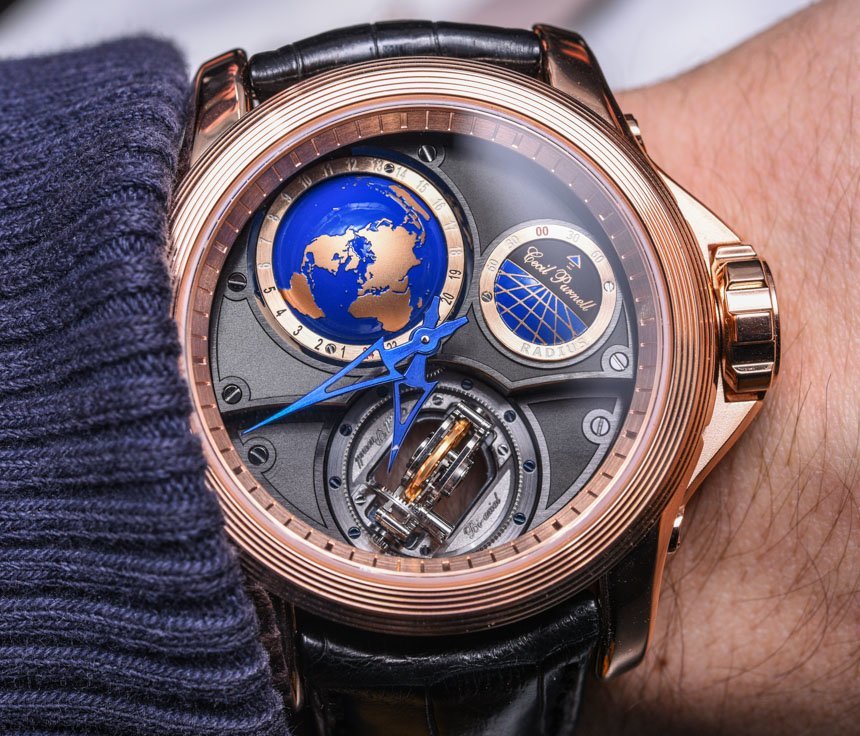 Seriously, though, the world time indicator is excellent. The time is indicated by a semi-circular globe that rotates once every 24 hours. Surrounded by a numbered chapter ring, the countries align with their individual times as the clock turns and the half-globe rotates. It’s not very easy to read, but it is a fluid, handsome, and thoroughly well-executed idea. I kind of like complications like this, and in a way, it reminds me of the ones I saw in the Greubel Forsey GMT (hands-on here) or the Vicenterra GMT-3 (hands-on here) . 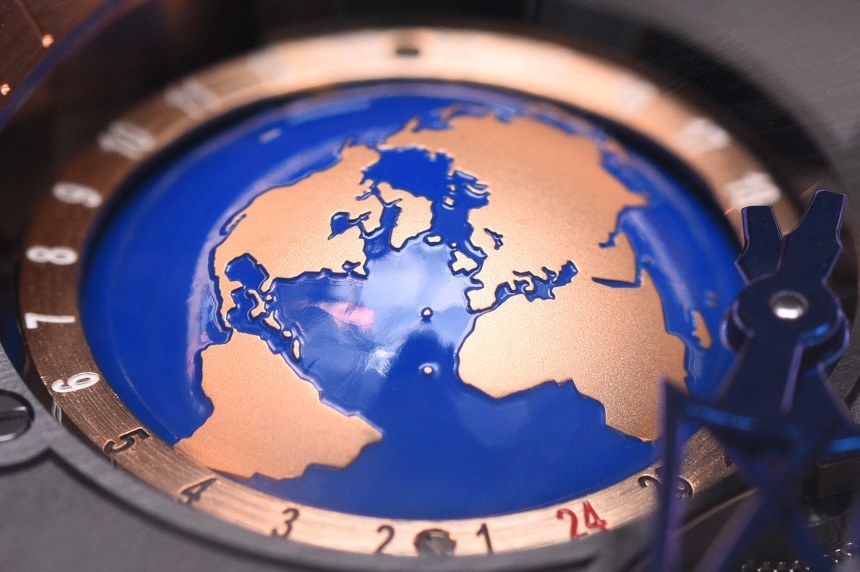 They are little more than an aesthetic innovation, requiring very little technical expertise to conceive. But they do allow art to creep into watchmaking without it becoming too contrived. That globe, which looks awesome, is basically a fancy GMT hand. Less precise; more beautiful – a balance all watchmakers are always trying to strike. In this instance, I believe the Cecil Purnell V17 World Time Bi-Axial Tourbillon has struck it right between the eyes. 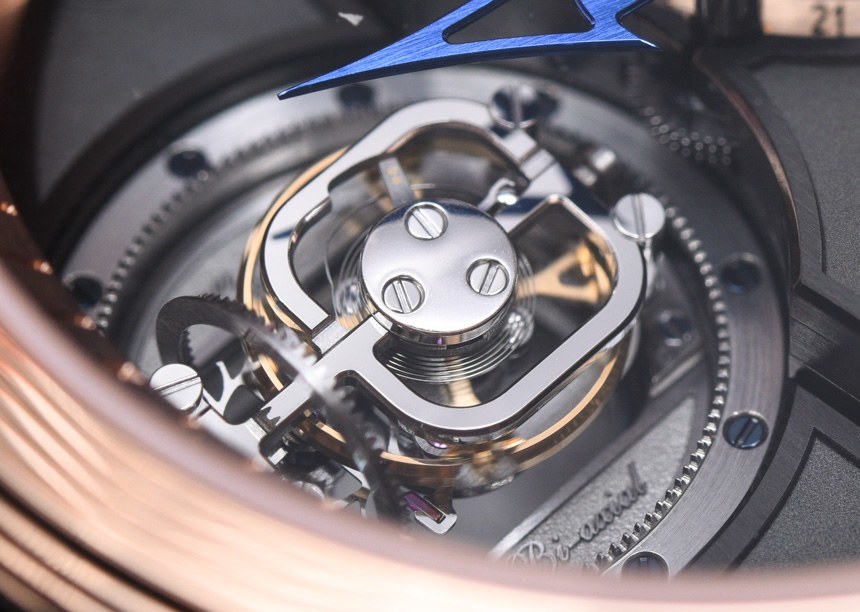 So maybe Cecil Purnell thought they’d better add a dash of horological clout to proceedings to compensate for the forgivable whimsy of the world timer. Enter the bi-axial tourbillon. Tourbillons are great; bi-axial tourbillons are even better. They are theoretically better at eliminating positional error by moving the balance wheel through three dimensions, but from a layman’s perspective, they just look amazing. They make it appear as if the tourbillon is falling through space, suspended by an almost invisible arm. It is a glorious thing to see time objectified, floating before your eyes, twisting, turning, ticking away in its own environment. The Cecil Purnell V17 World Time Bi-Axial Tourbillon is a treat and a really lovely addition to a range of madcap creations. The marriage of a tourbillon with a horizon indicator is a partnership of complimentary features that enjoy very different relationships with gravity: the former aims to eliminate gravity, while the latter is controlled by it. These polarised relationships create a feeling of balance that transcends the aesthetic. 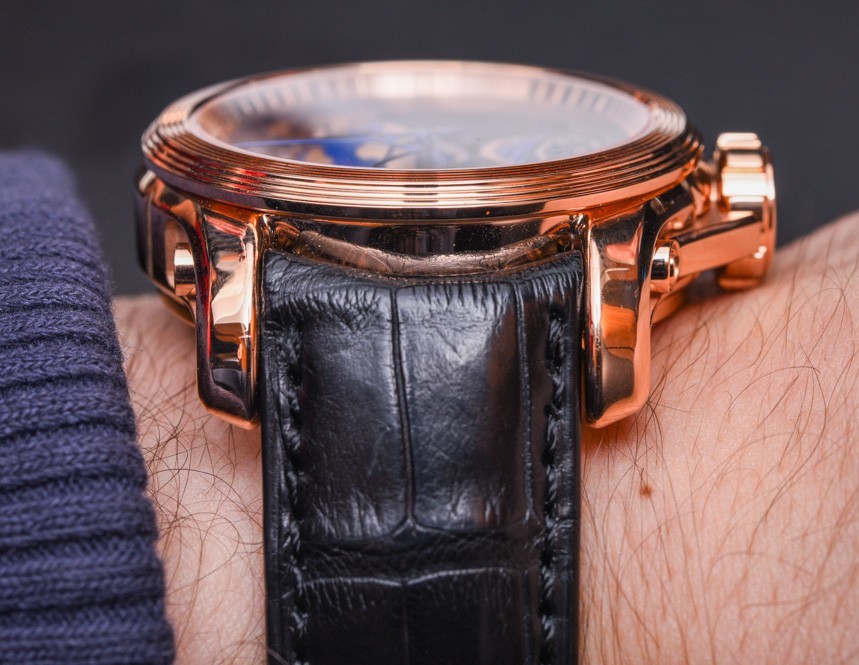 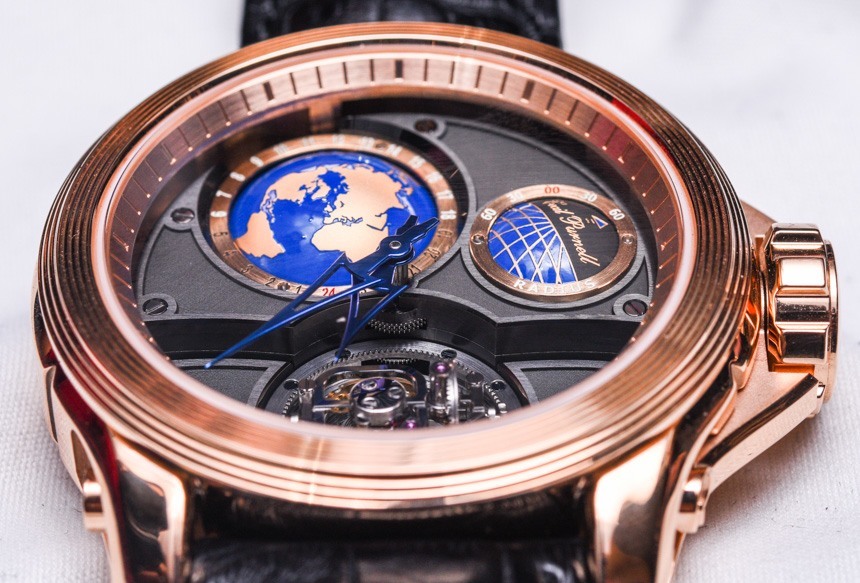 On the technical side of things, the Cecil Purnell V17 World Time Bi-Axial Tourbillon watch is 45mm wide, water resistant to 50 meters, and comes on a black leather strap with folding rose gold clasp. The movement (calibre CP-V17) has a 70-hour power reserve, 267 components, and operates at 21,600vph. The 13mm tourbillon cage hovers between two bridges, rotating as the seconds tick by. The hands, which are bold in style, but beautifully designed, with a straight-grain finish and delicate chamfer along the edge, are shown in rose gold on the official website, but appear to be blue in real life – at this level you will certainly be given the chance to go with your preferred color combination. Either way, they both look great (I might go for rose gold, as in this style of hand I think it looks a little classier). 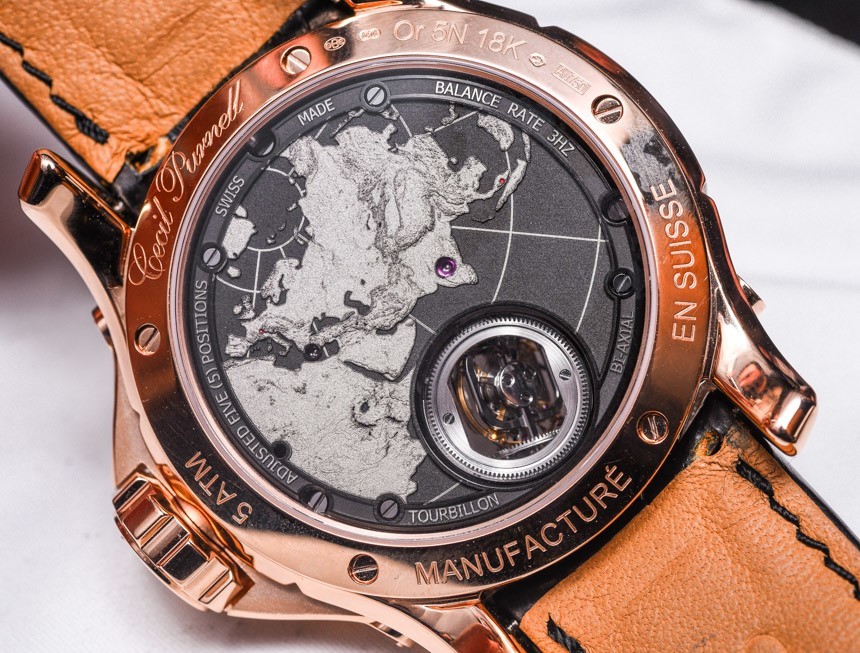 Talking of class, if you get chance to handle this watch you should turn it over right away. As a huge fan of engraving, I was overjoyed to see an appropriate map adorning the case back. There are a couple of holes drilled through so you can see some of the jewels, but the main draw of the movement is the bi-axial tourbillon, which is viewable from the back as well. You get a little bit of everything from the back of this watch – nice case engraving, well-rendered plate engraving, a flash of motion from the movement, and a great colour contrast between the rose gold case and the dark silver map. 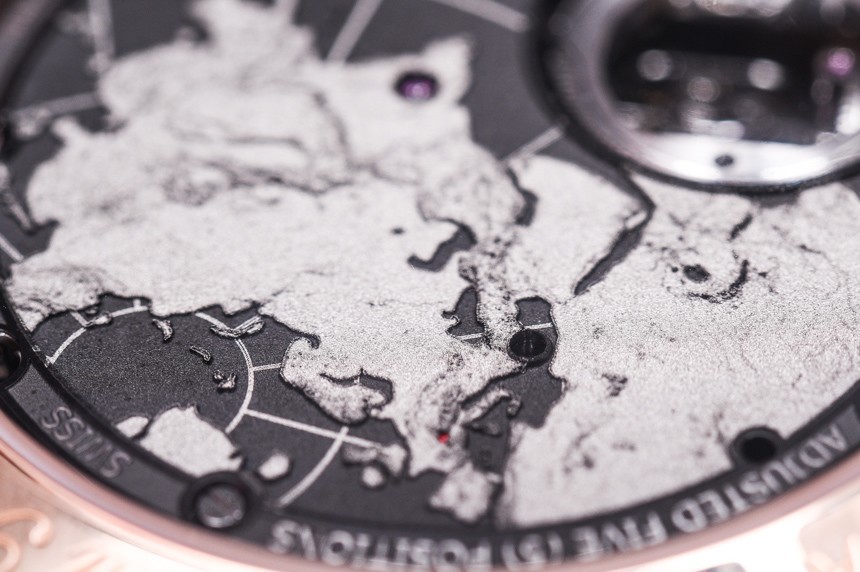 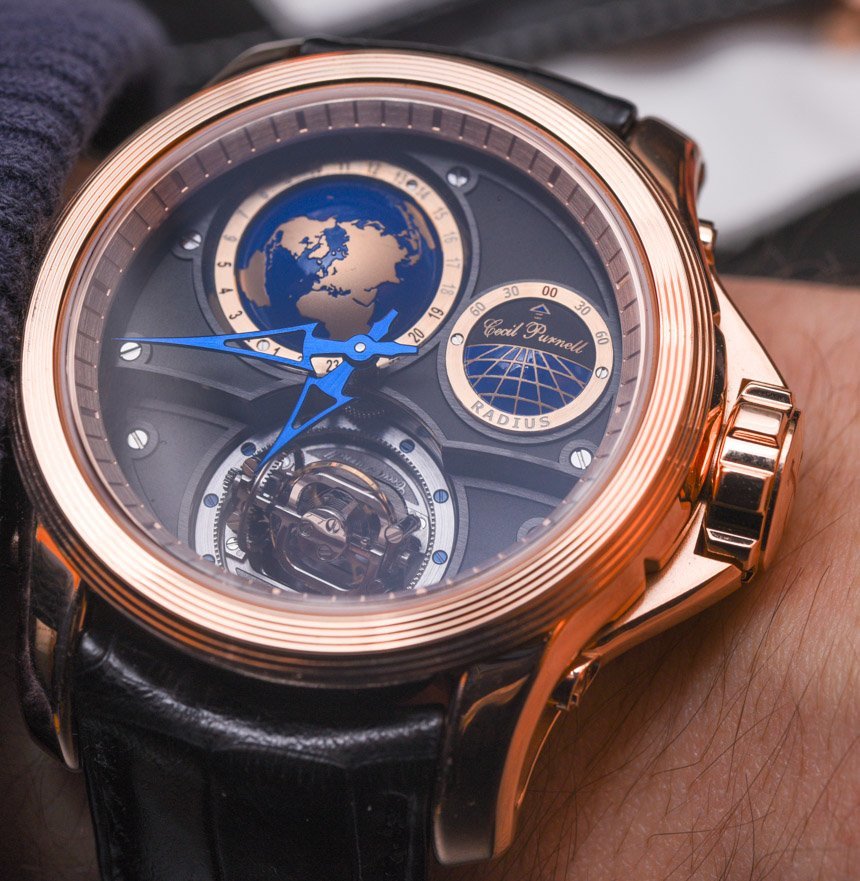 Now for the bad news. There will only be ten of these 18ct Rose Gold beauties produced. This is sure to result in DIY stores the world over selling out of spirit levels, as everyone who doesn’t jump the queue for one of these multi-functional timepieces rushes to ensure flat shelves. If you miss the rush and decide to settle for a Cecil Purnell V17 World Time Bi-Axial Tourbillon watch, you can expect to pay a price of CHF 245,000. cecilpurnell.com