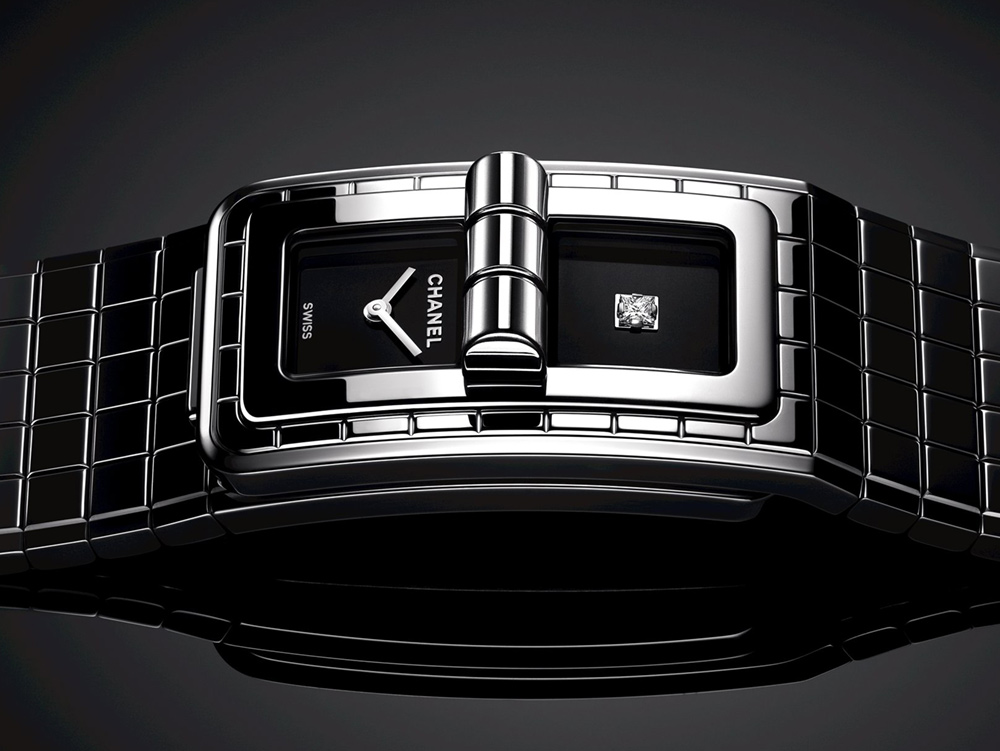 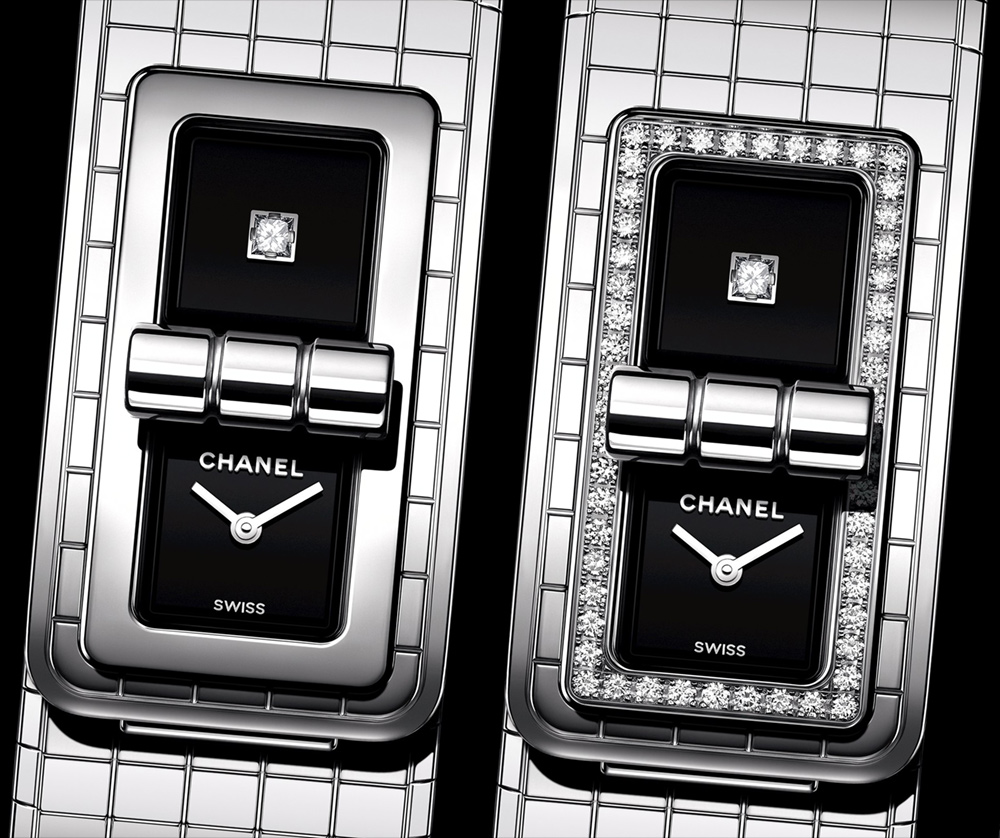 Of all the Swiss watch brands, Chanel is perhaps the only one that could pull off introducing two new calibers, one year after the next, followed immediately by a quartz fashion watch designed after a handbag clasp, giving it a name like Chanel Code Coco. There are many things to admire about Chanel’s watch division: the Premiere Camelia Skeleton, a new caliber created for a woman’s watch; the Monsieur Chanel, a new jump hour caliber created for a men’s watch (hands-on in platinum here); and just the fact that Chanel made the investment to establish a Swiss watch manufacture back in the 1990s when its fellow fashion house brands were still licensing their names to makers of cheap fashion watches. 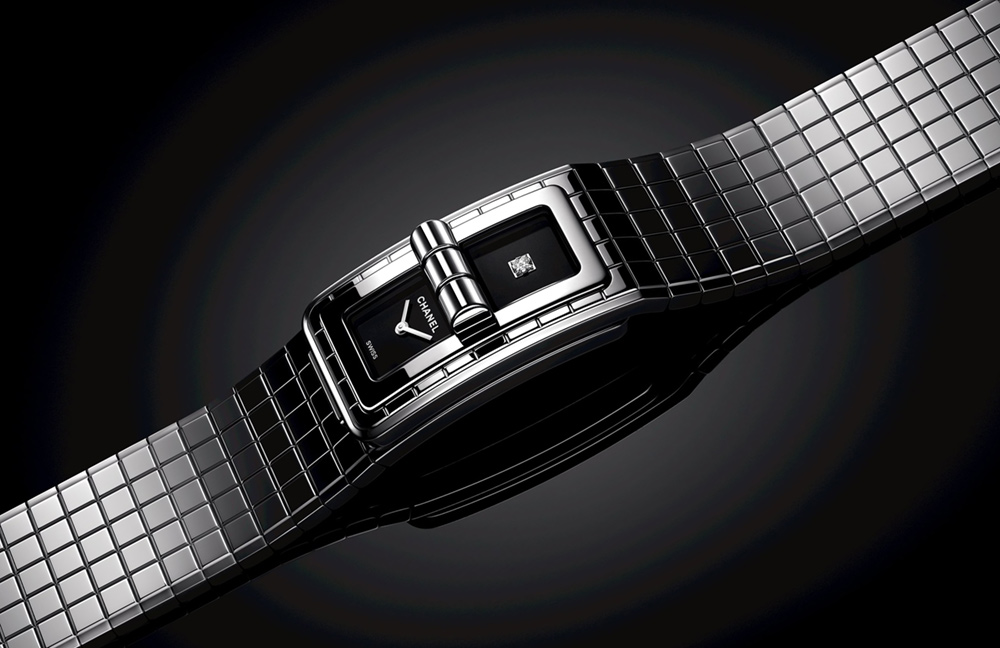 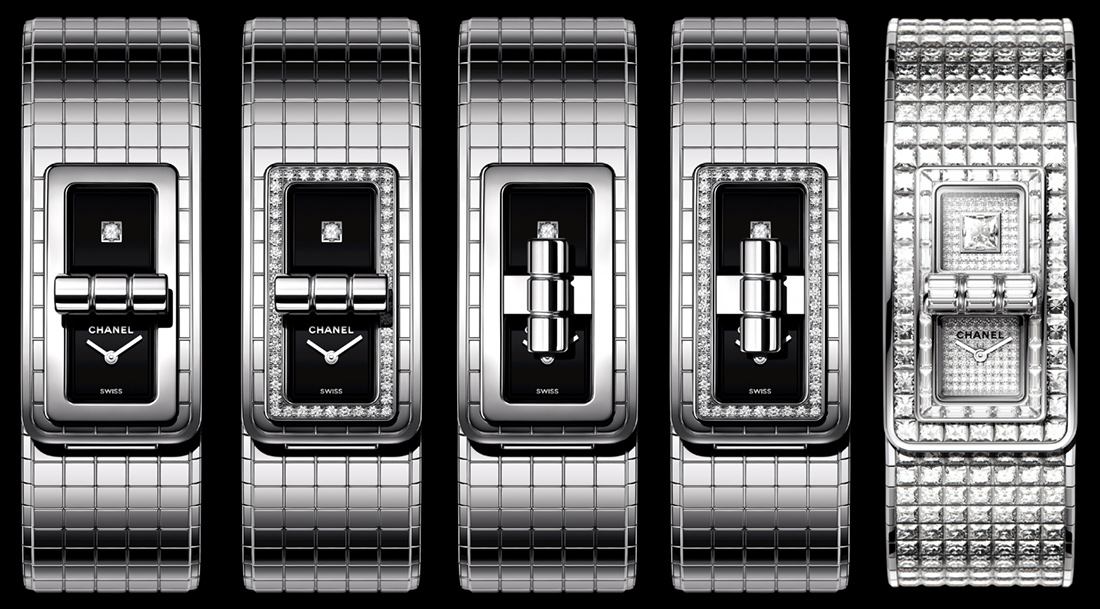 The Chanel Code Coco in stainless steel, with or without a diamond bezel. The clasp can be vertical or horizontal.

The Chanel Code Coco collection is also admirable in the sense that it represents Chanel’s unwillingness to abandon its roots as a couture fashion house for the sake of watchmaking snobbery, not to mention its commitment to a rigorously guarded identity based on the aesthetic principles of its founder, Gabrielle (“Coco”) Chanel. Designing collection after collection over many years that convey a fresh idea while maintaining the brand’s signature design codes cannot be an easy task. With the Chanel Code Coco – no matter how much it makes you think of “cukoo for Cocoa Puffs” – Chanel is making a statement about that endeavor. 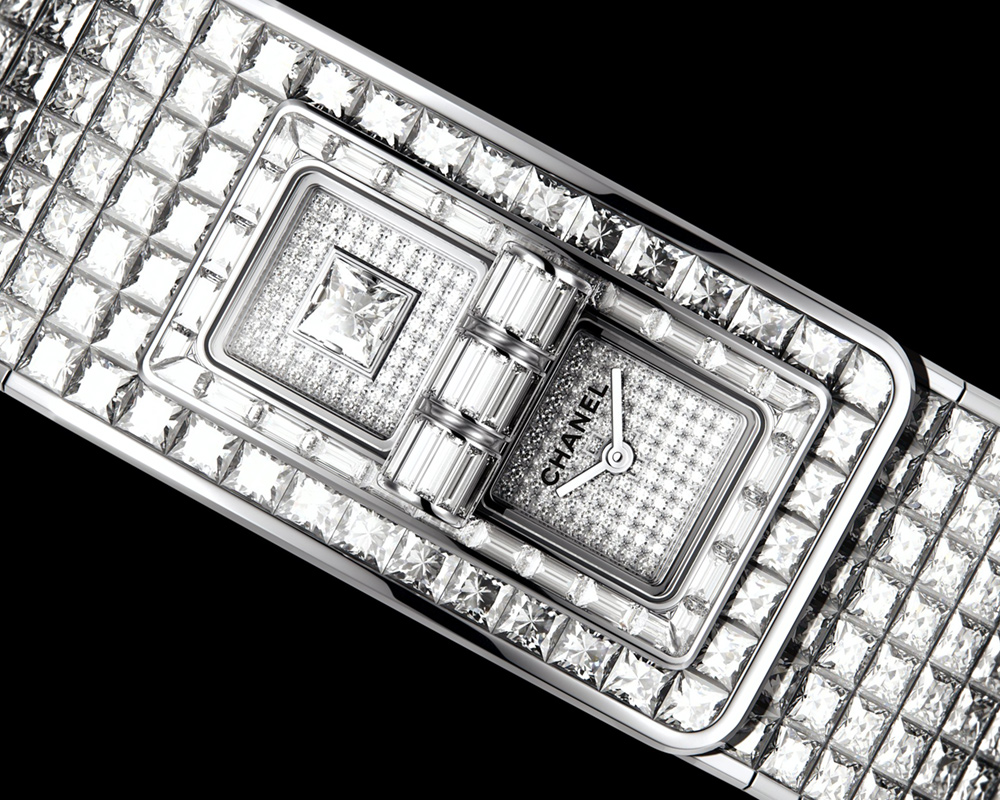 The watches are quartz, which immediately identifies them as fashion or jewelry watches, and the Chanel Code Coco collection includes both. The inspiration for the watch is a handbag. The case is designed to resemble the clasp of the 2.55 handbag created by Mademoiselle Chanel, with a name that comes from the date she designed it: February 1955. The design, in one form or another, has been produced by the maison ever since, and has certainly had a lot of traction for the company, becoming one of the most iconic and recognizable designs in the world. It costs upwards of $5,000 – as much as the basic Code Coco watch model. 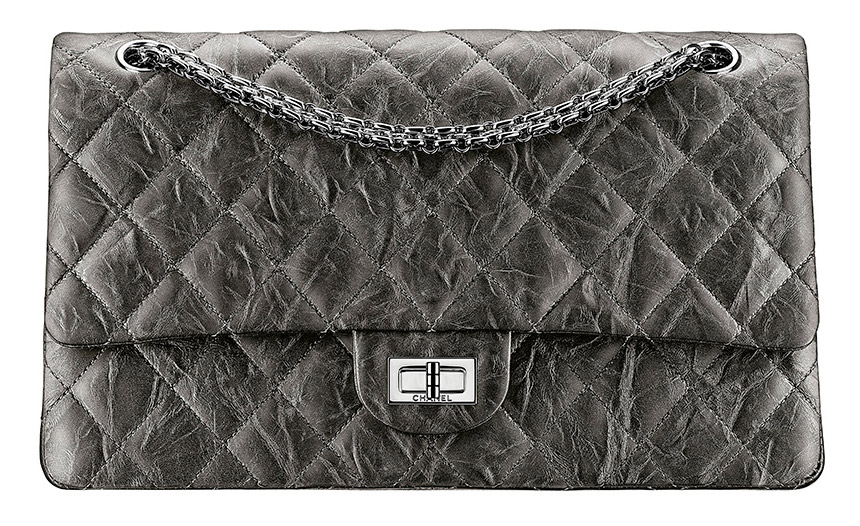 The Chanel 2.55 handbag, the inspiration behind the Code Coco watch collection.

The bag originally came with a front lock called “the Mademoiselle Lock” (in reference to Coco Chanel never marrying). Since the 1980s, versions can also be supplied with a lock in the shape of a double CC logo. These are called “Classic Flaps.” The bag is quilted, a pattern intended to give it shape and volume, and this design element is reflected in the bracelet of the watch, a design used previously by Chanel in both its timepieces and fine jewelry collections. This cross-referencing of Chanel design codes frequently appears in Chanel timepiece collections, from the tweed-patterned straps of the Boyfriend collection to the Camelia, Coco’s favorite flower, depicted on so many dials and in the movement itself of the Caliber 2 in the Premiere Camelia Skeleton. If anyone has the right to introduce a watch inspired by a handbag, it is Chanel. 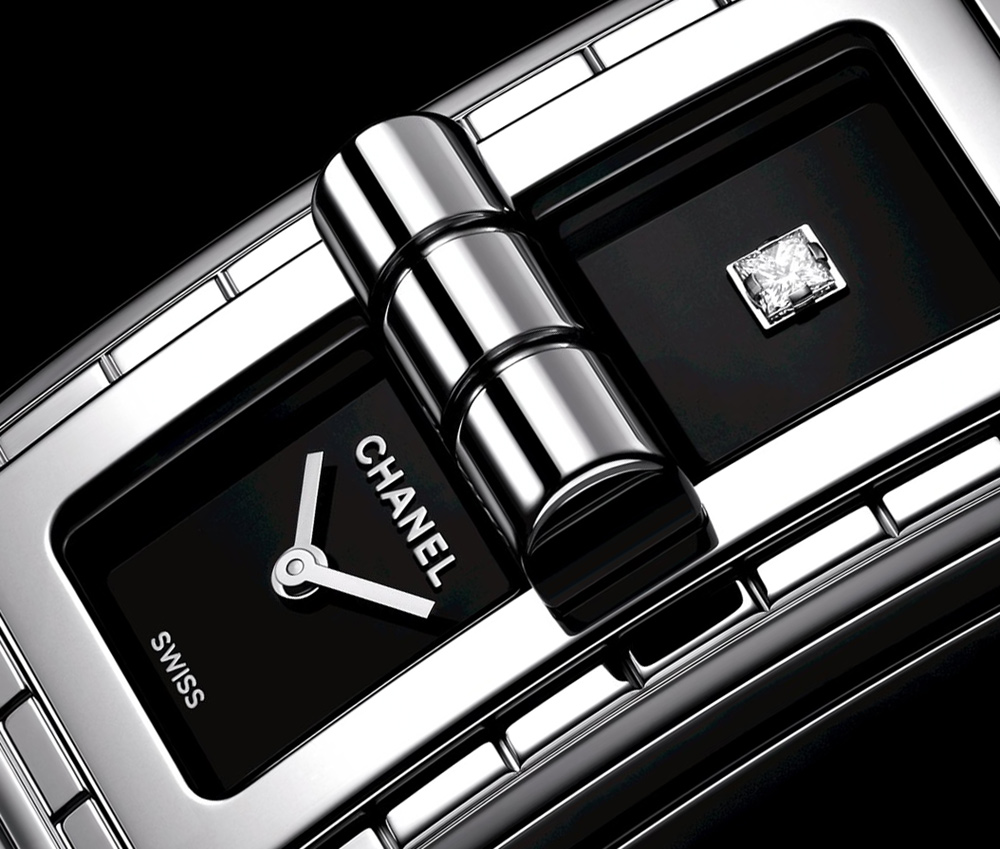 The Code Coco’s elongated case includes upper and lower squares separated by a middle portion that resembles the clasp on the 2.55 handbag. In the basic steel version (H5144) with no diamonds on the bezel, dial or bracelet, the upper dial is simply set with a single princess-cut (square) diamond, while the lower dial tells time, and the dials are black lacquered. It is priced at $5,000. There is also a steel version with 52 brilliant-cut diamonds set into the bezel (H5145), in addition to the single princess cut. It is priced at $9,100. 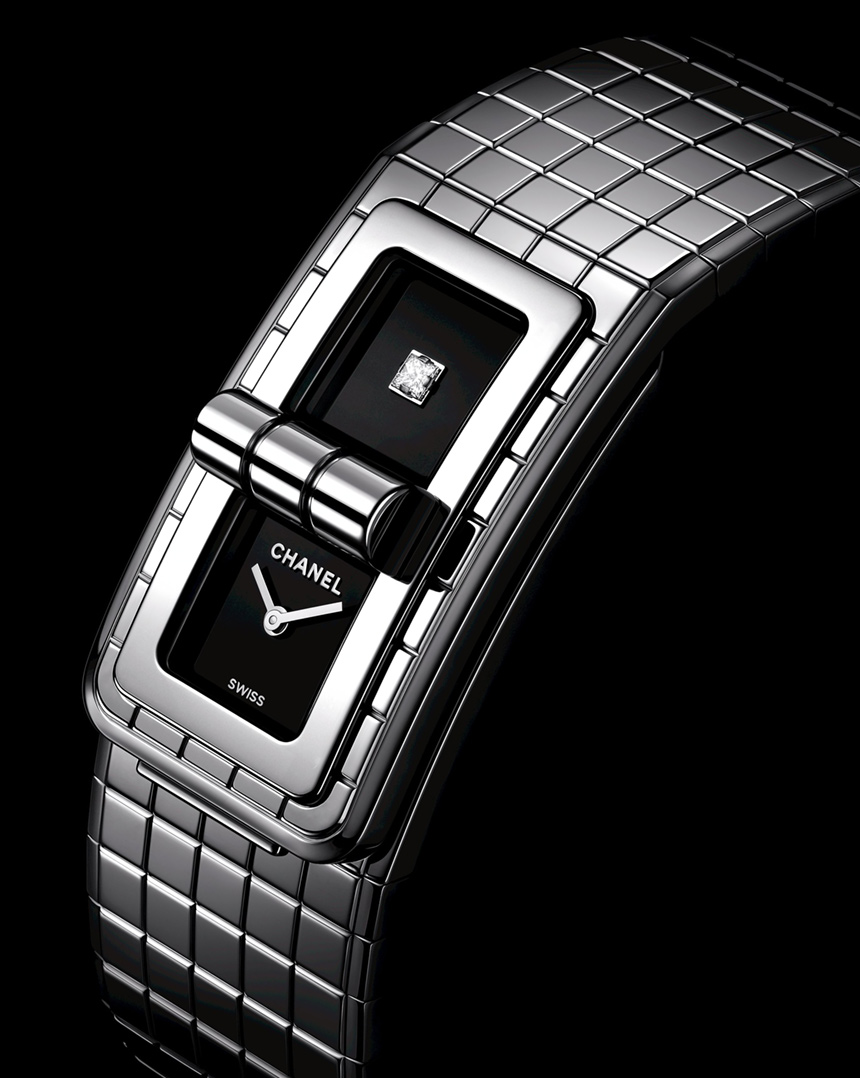 The case dimensions of the Chanel Code Coco watches are 38.1 x 21.5, water-resistant to 30m, and the clasp dividing the two dials is turnable, clicking into place either horizontally or vertically – hiding the dial in the vertical position. This has no function, but serves as a fun design element for the wearer to interact and play with. chanel.com