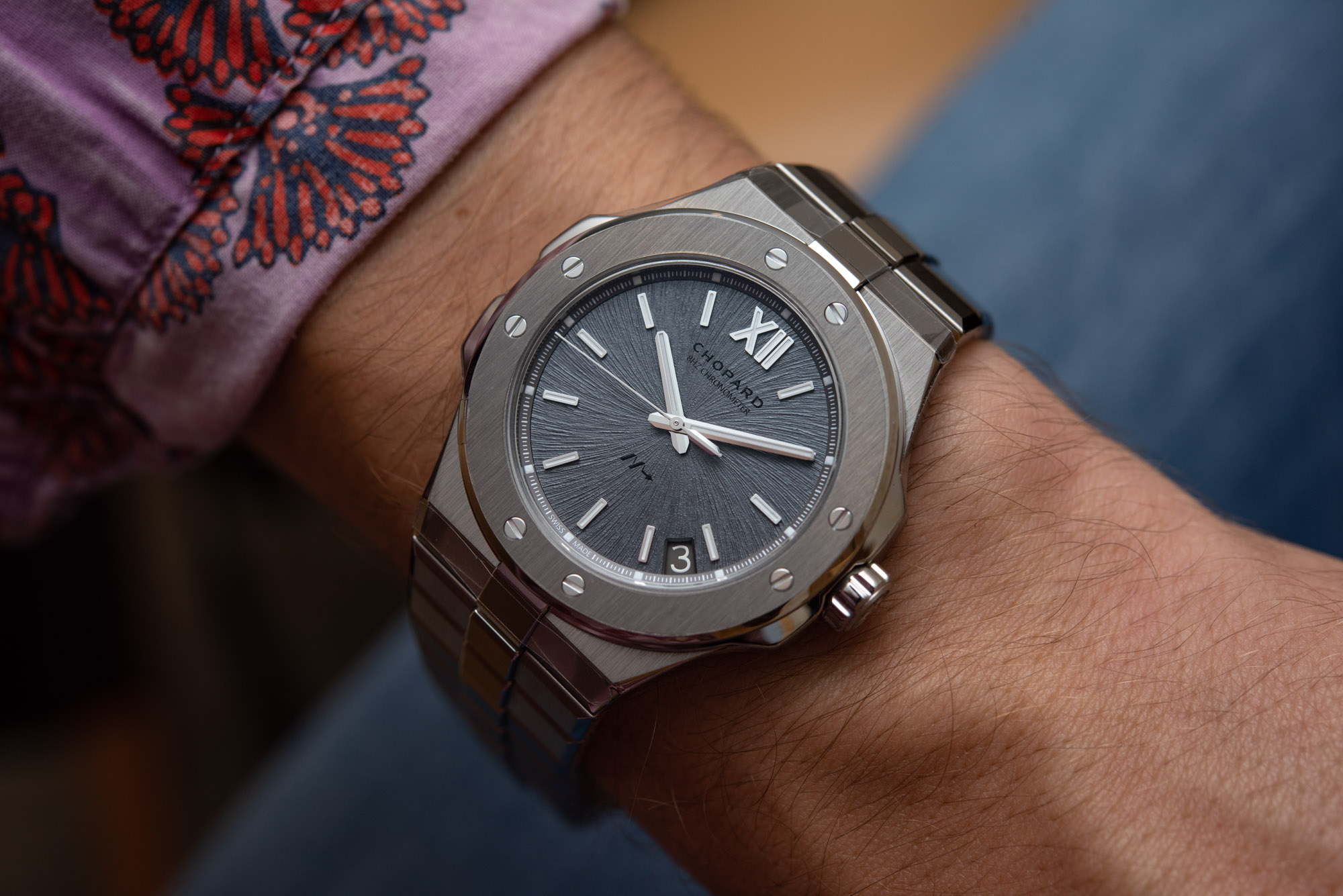 Do you know what’s really rare in the world of watches even though we are told it shouldn’t be? A mechanical watch that boasts a very high-frequency movement and COSC chronometer certification at the same time. Weird, huh? It is weird because the basic notion has forever been “the higher the frequency, the greater the accuracy.” Well, the Chopard Alpine Eagle Cadence 8HF is here with an exceptionally high-frequency 8Hz movement, now wrapped entirely in titanium and, as you have guessed it by now, it is COSC-certified. And pricey. 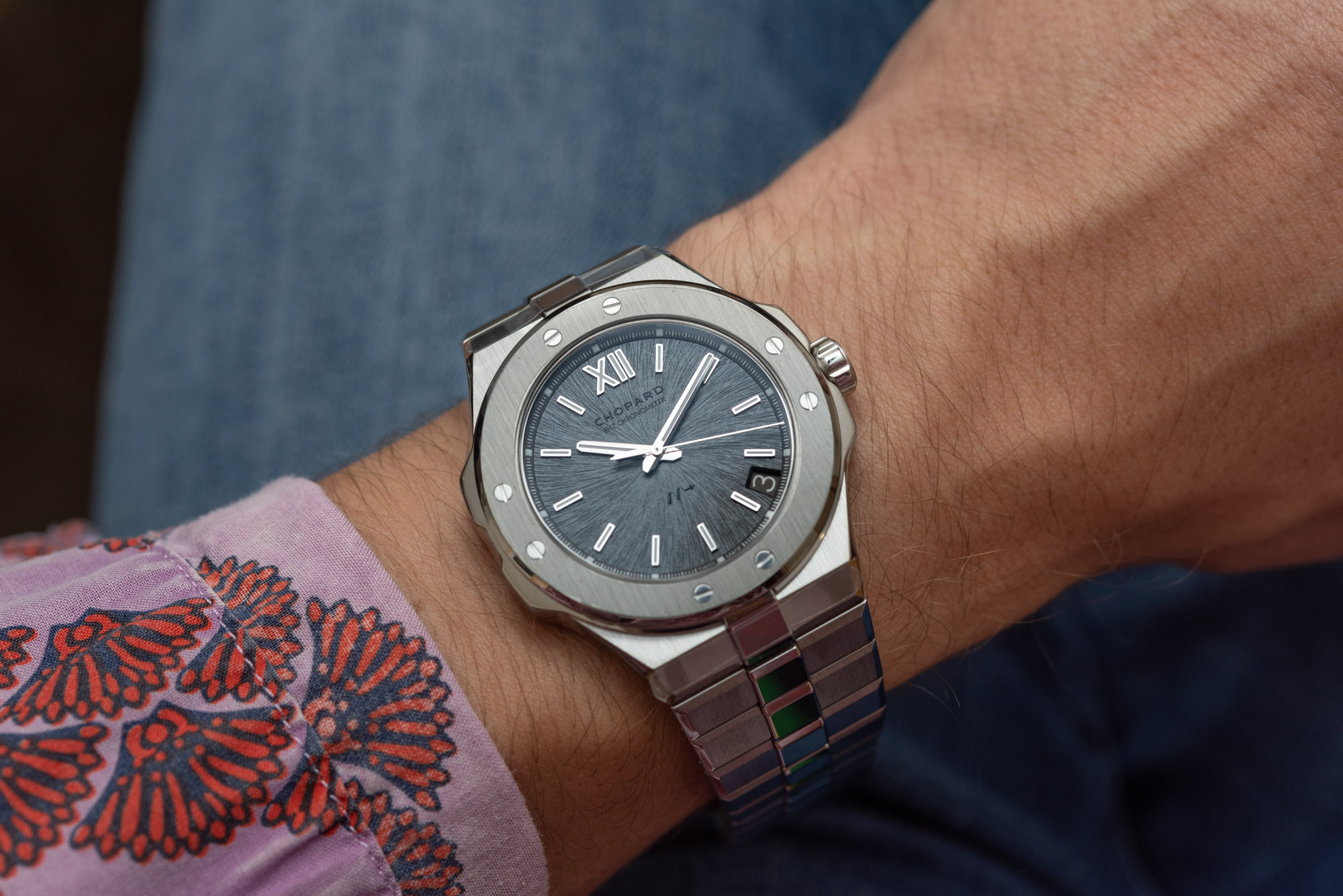 We debuted the Chopard Alpine Eagle at the time of its premiere in Lucent Steel A223. Read that article for all that you need to know about it and its genuinely very special Lucent Steel A223 exterior – arguably the prettiest, most spectacular steel that is used in luxury watchmaking today. The new Chopard Alpine Eagle Cadence 8HF, being the most high-tech rendition of the AE, ditches steel in favor of grade 5 titanium. Strangely, this would be considered an upgrade for most all other luxury sports watches – titanium cases and bracelets tend to be considerably rarer and more costly than steel ones – but here, in my mind, it’s merely an alternative to the tactile feel and glowing white aesthetic of Lucent Steel. 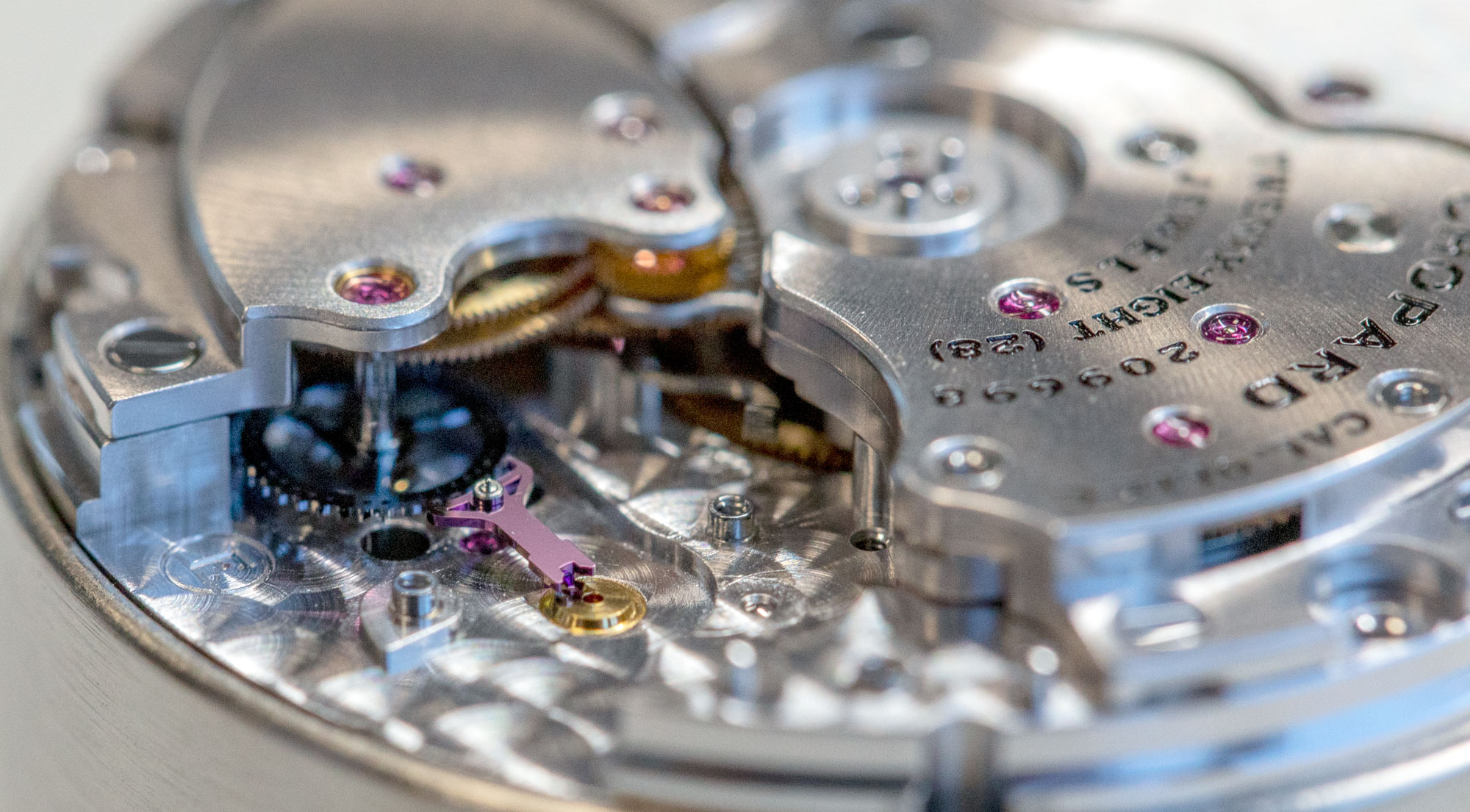 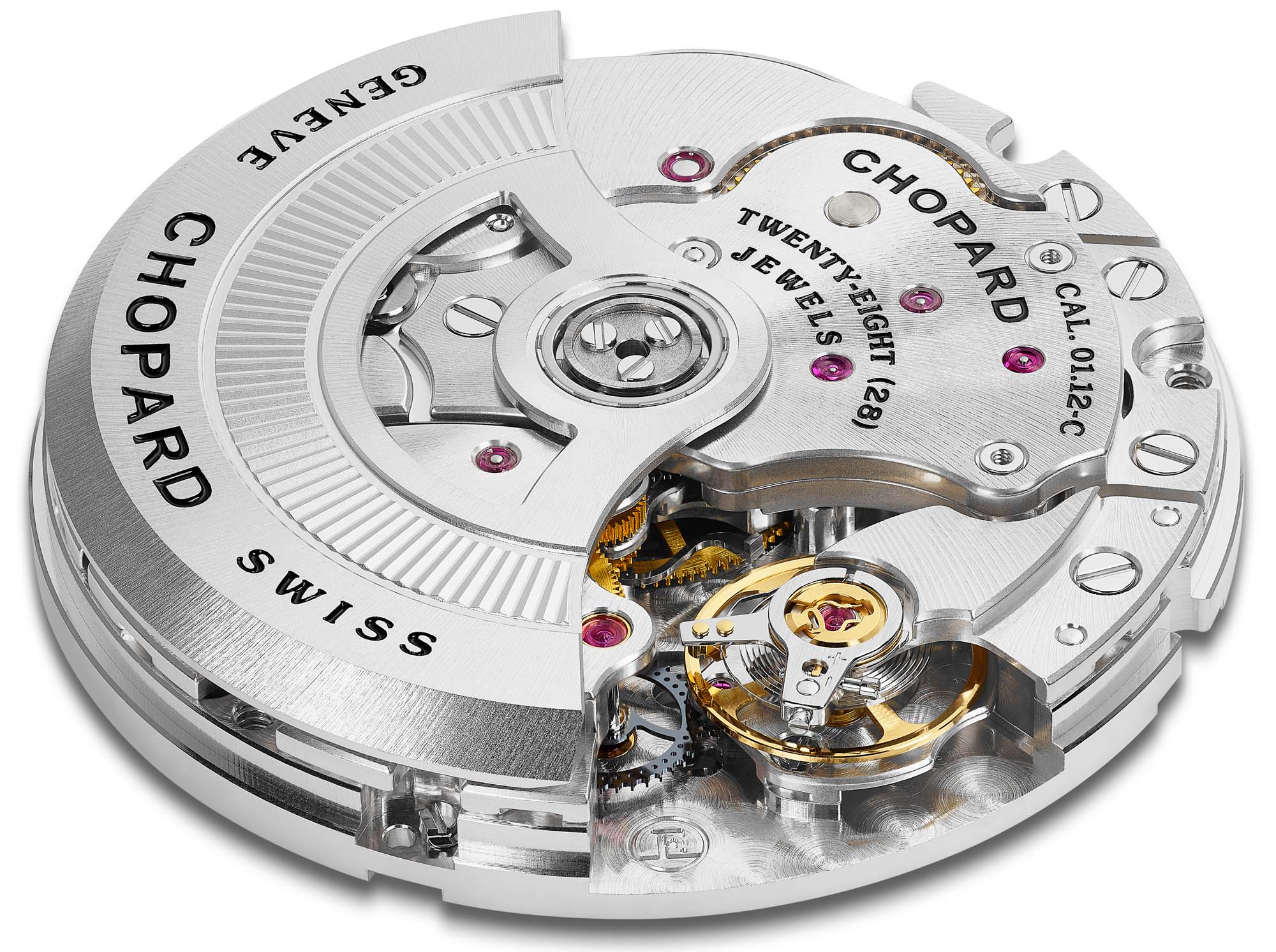 8Hz technology is the name of the game here, so we’ll leave further design talks for later. Back in 2012 Chopard debuted its chronometer-certified high-frequency movement – and by high, we mean not 5 Hertz, but 8 Hertz, which is double what is considered to be a modern frequency for mechanical watches. Chopard hasn’t exactly cracked the mass production of these movements: For the last decade, they’ve been offered every once in a while in 100-250-piece limitations, which is the case with the Chopard Alpine Eagle Cadence 8HF that is limited to 250 numbered pieces. 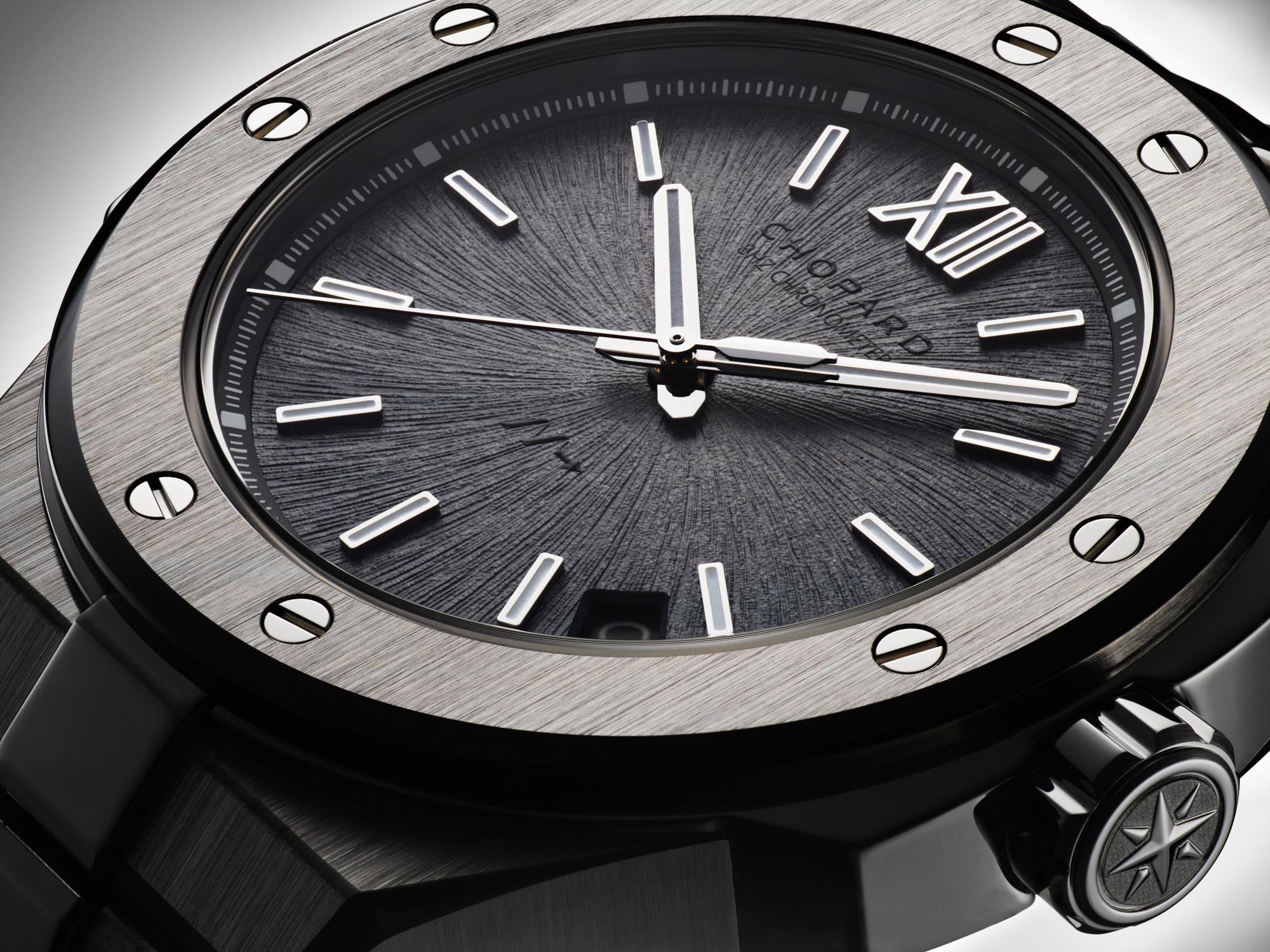 The reason for this is that regulating these movements takes lots of extra effort, know-how, and time, and that’s especially true if they are to be made not simply to function well but to pass COSC chronometer tests. What I discovered over the years in my discussions with watchmakers (from small and large brands, historic and high-tech ones, you name it) is that 4 Hertz is generally accepted to be the perfect frequency for passing COSC and meeting modern consumer expectations such as shock resistance, accuracy during actual wear and power reserve. 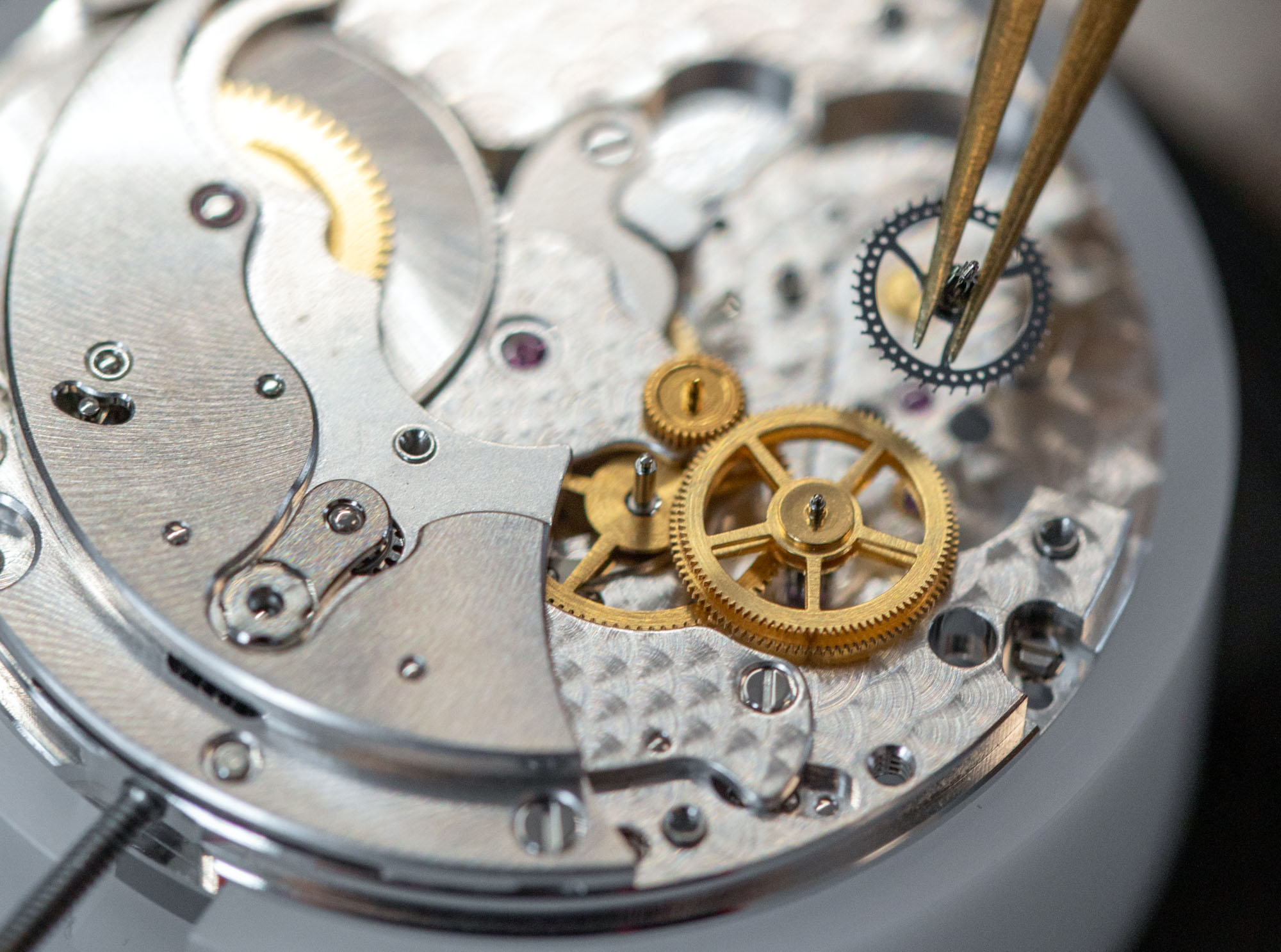 Because here’s the catch: For its chronometer certifications, COSC only tests uncased movements in stationary settings, in five different positions under three different temperatures (8 °C, 23 °C, 38 °C). And although a low frequency some said is easier to modulate for these stationary tests and various positions, in the real world, a shock (like putting your hand down on a desk a little more vigorously) can and will upset the balance in its motion. The higher the frequency, the sooner the balance wheel will return to its correct “pace” where it is poised to measure time accurately. A very high frequency, such as, say, 8 Hertz, may do exceptionally well at this, but it complicates the watchmakers’ task when it comes to adjusting for the various positions – a fine balancing act that is required to be performed well to stay within the various COSC chronometer requirements, such as daily rate, arithmetic mean of daily rates, arithmetic mean of the five absolute values ​​of the rate variations obtained for the five positions of the watch during the first 10 days of testing… and so on. 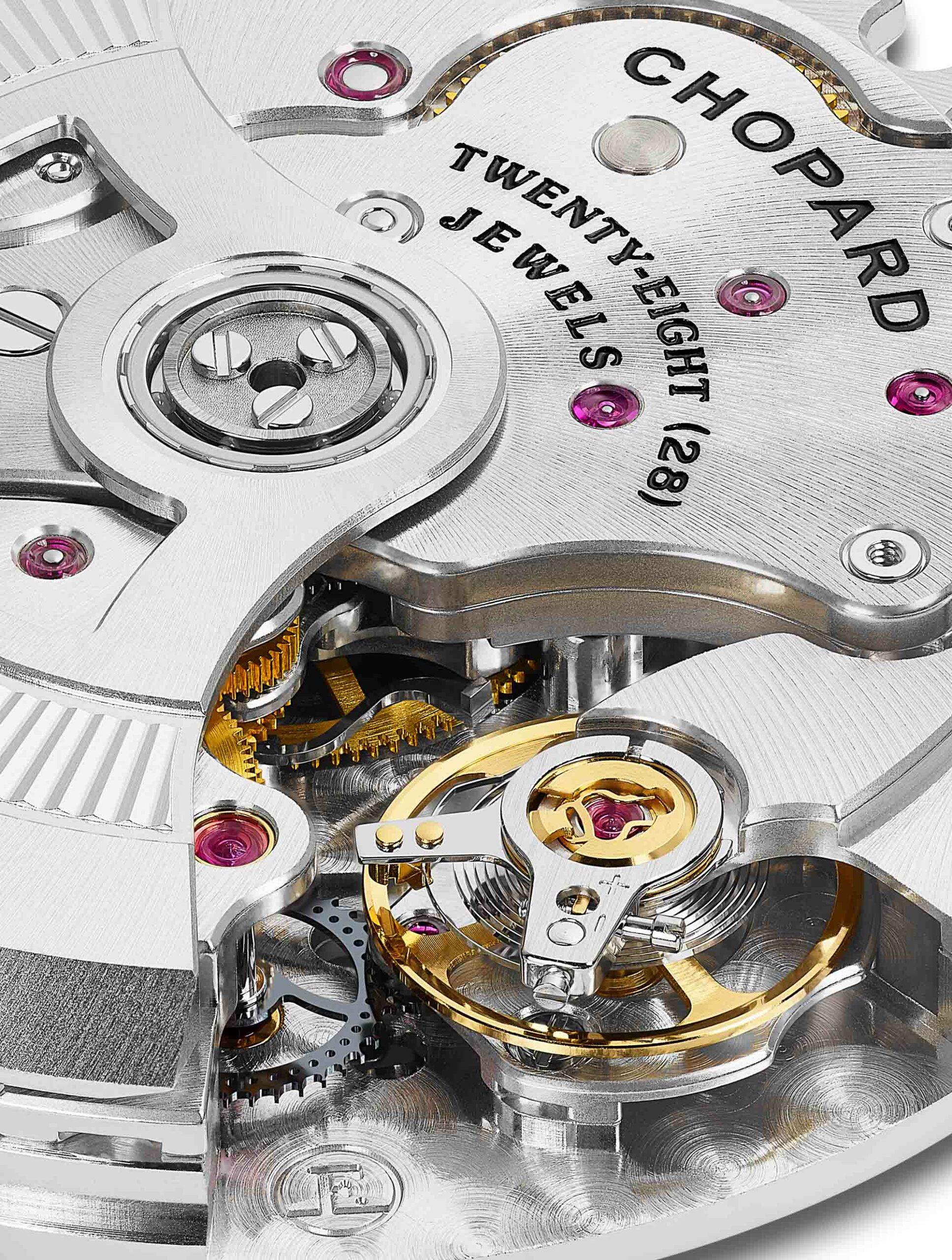 Chopard says it uses “the properties of mono-crystalline silicon to make the most of this 8 Hertz frequency. This light and self-lubricating material is used for the pallet lever, the escape wheel, and the impulse-pin, all the components that are subject to high friction, which is thus reduced to a minimum.” Attaining 8 Hertz frequency, that is 57,600 vibrations per hour, would be pretty much impossible if lubricants (even modern synthetic ones) were to be involved. At this pace, the tiny droplets of lubricant would either be cleaned off or gunk up due to the sheer number and velocity of interactions between the various surfaces that slide over each other in the escapement. The brand says, “The lightness of silicon, its tribological properties, and the freedom offered by its manufacturing technology have enabled Chopard to develop an escapement dedicated to high frequencies without resulting in increased energy consumption.” 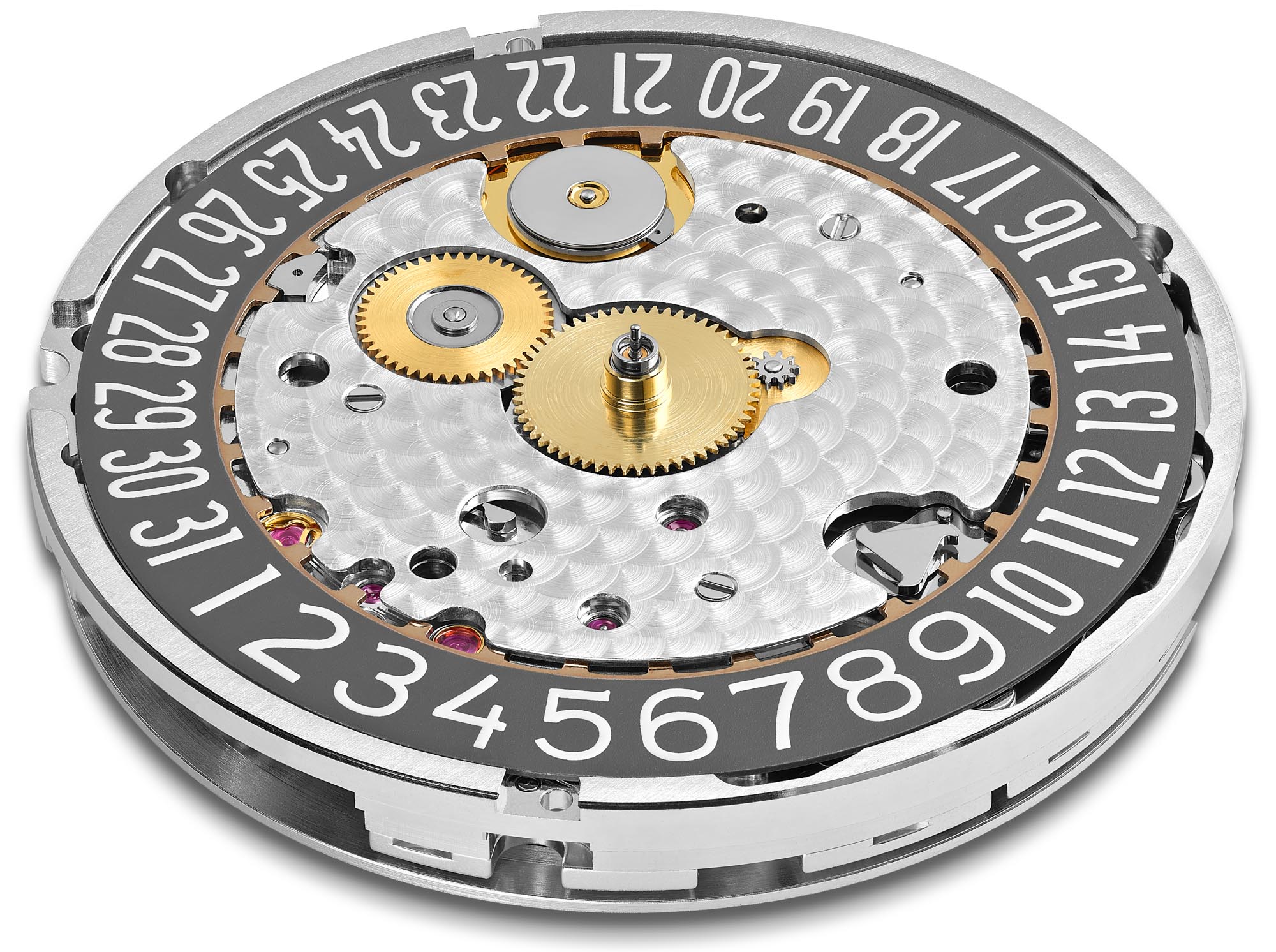 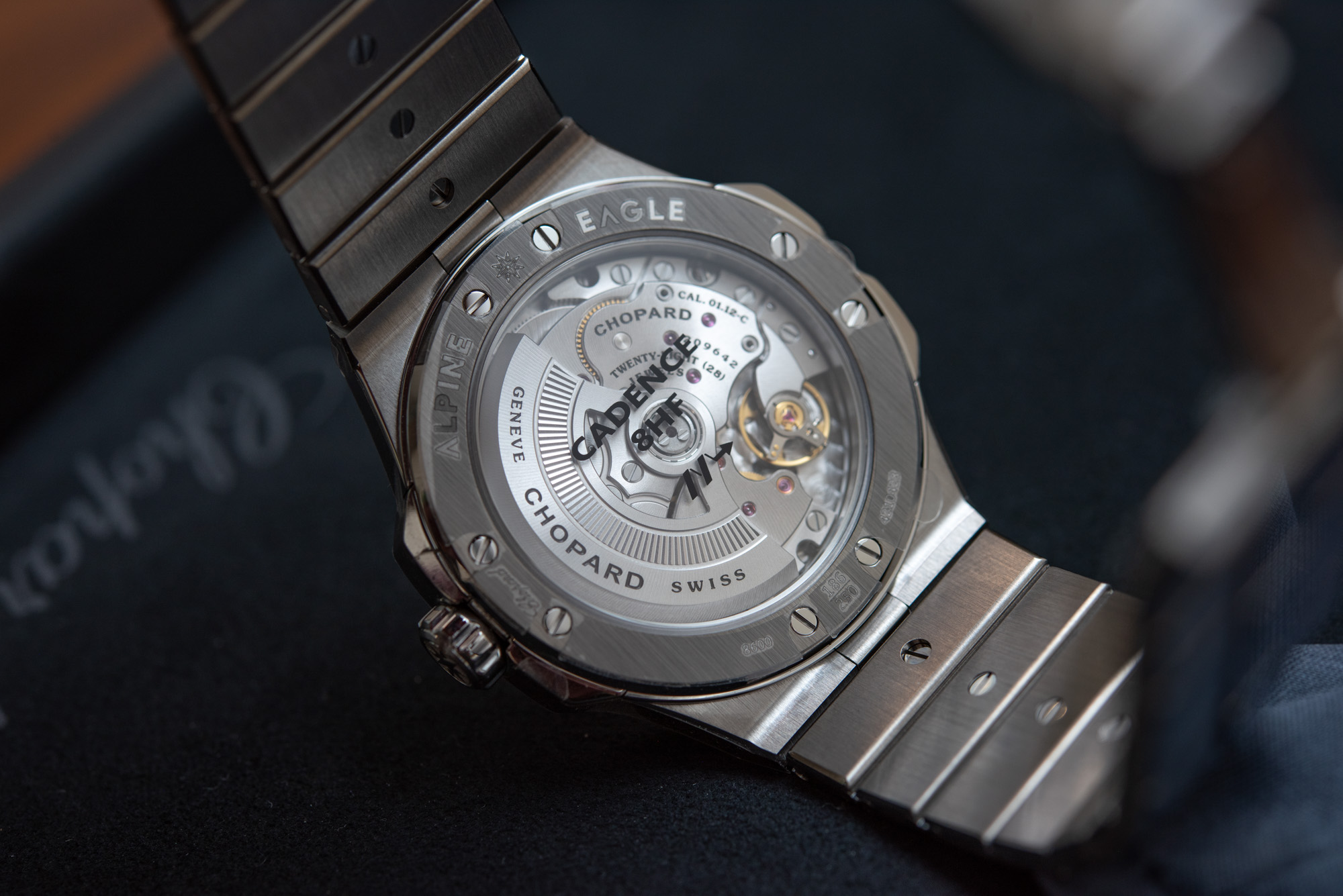 As such, and here’s another rather incredible feat, Calibre 01.12-C inside the Chopard Alpine Eagle Cadence 8HF has a 60-hour power reserve, a truly remarkable degree of autonomy generally incompatible with high frequencies. Chopard says, “Several patents and the technologies employed have made it possible to reconcile apparently contractionary objectives: chronometry, autonomy, and reliability.” The movement measures just 4.95mm-thick, which is one heck of an engineering feat, especially when considering the 57,600 vph operating frequency, 60 hours of power reserve, and self-winding system – all coming in at a total of 210 components. 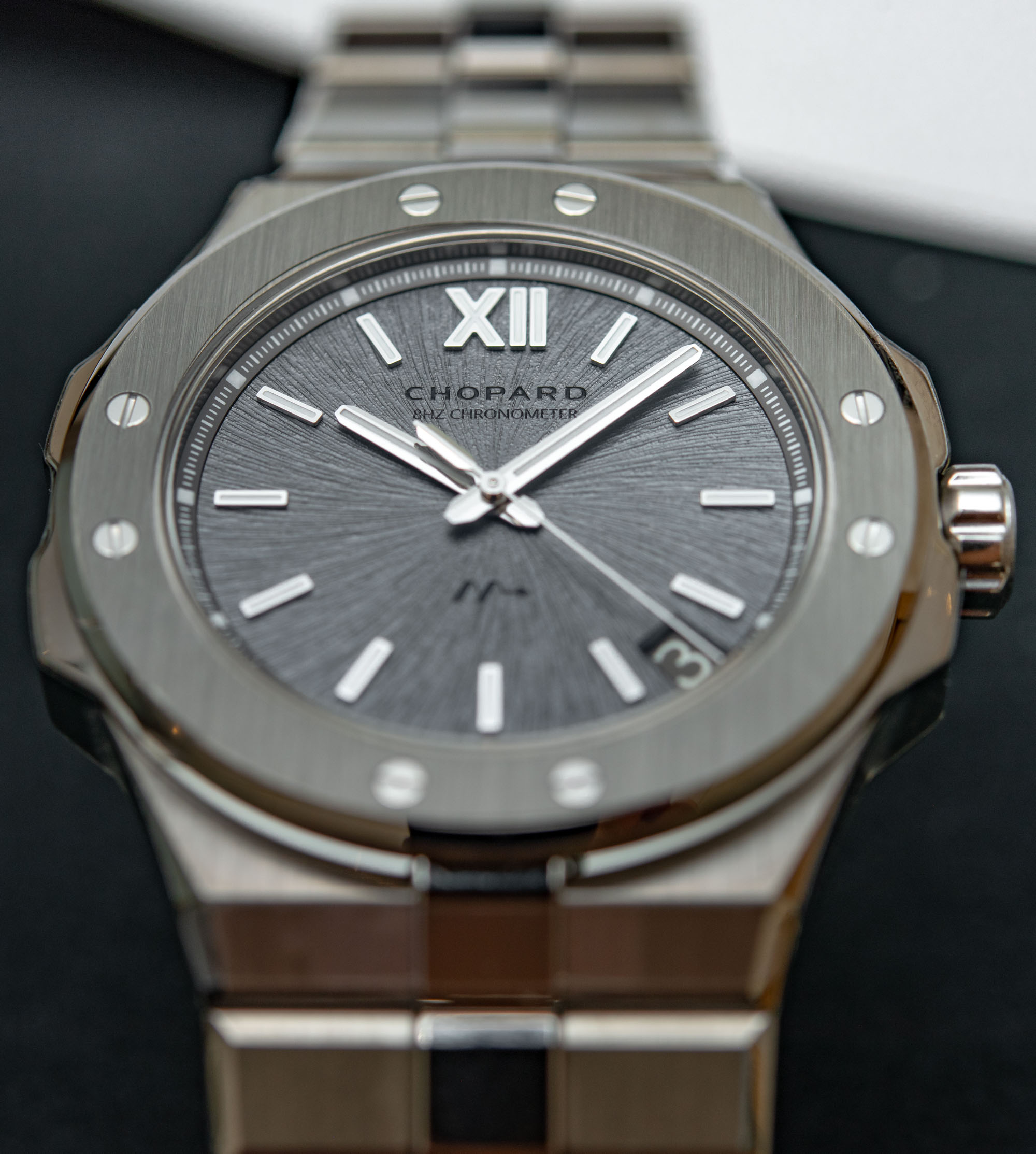 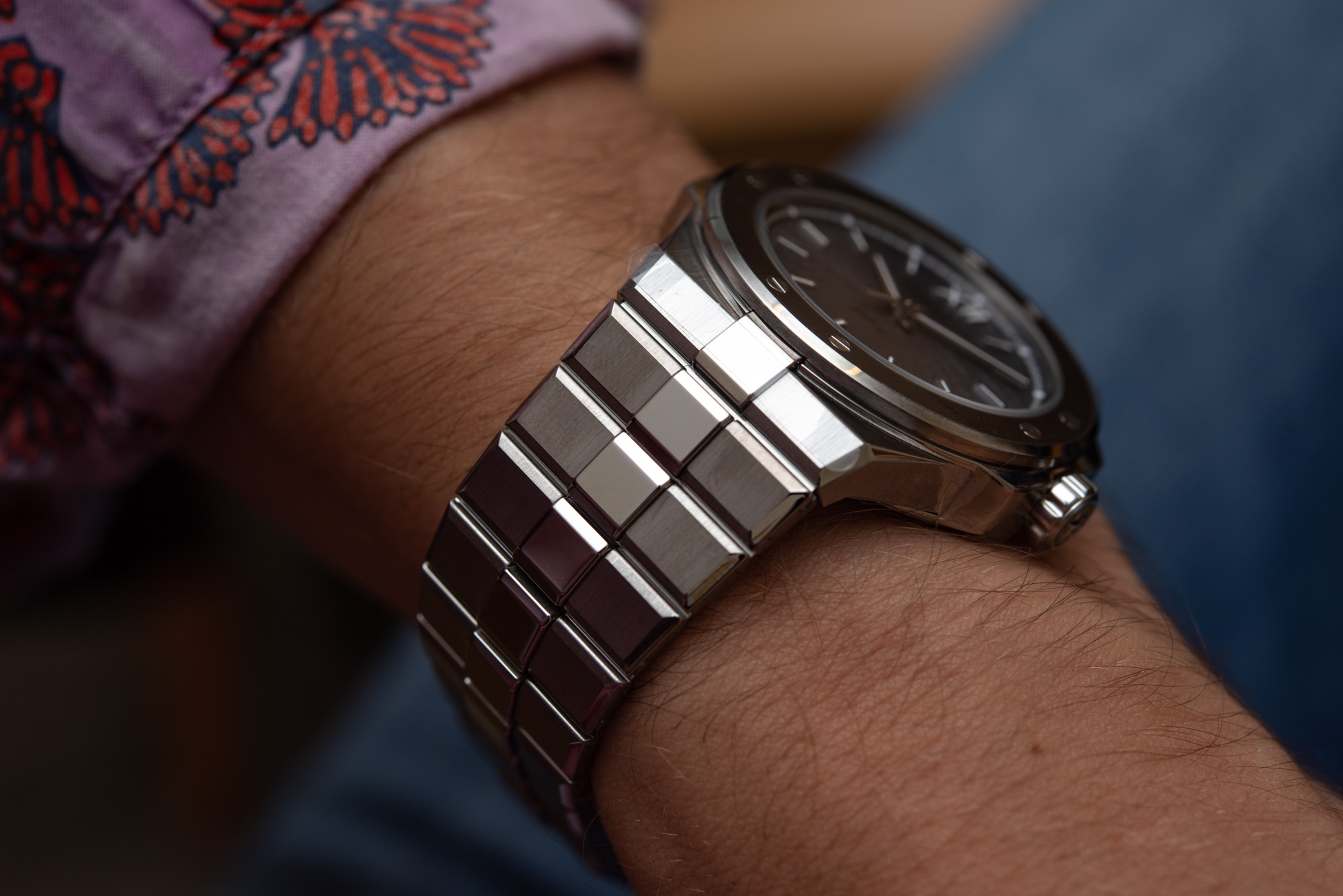 All this performance comes in a case that is less than 10mm-thick – 9.75mm, to be precise. We have seen high-performance movements come in that thick, so for the full case to measure in under 1cm is an achievement that does not go unnoticed. The rated 100 meters of water resistance is another nice touch, precisely what any and every sport(-ish) luxury watch should have – and yet we keep seeing 30- and 50-meter ratings in much thicker watches all too often. Both the front and rear crystals are in sapphire with plenty of glare-proofing applied.

The case and bracelet are crafted from Grade 5 titanium finished to a rather spectacular level of quality and intricacy. To date, titanium is often rendered as a blob of all-polished metal, without sharp edges and brushed surfaces. Chopard has really nailed the steel version – check out the hands-on article we linked to above for more details and explanation – and somehow it has managed to make titanium one of its whitest and brightest I have ever photographed. Overall, the links, case, and bezel are exceptionally well-executed – it’s just the odd square-ish “crown protector” section that I find to be a bit bloated in comparison to all the other chiseled angles and surfaces. 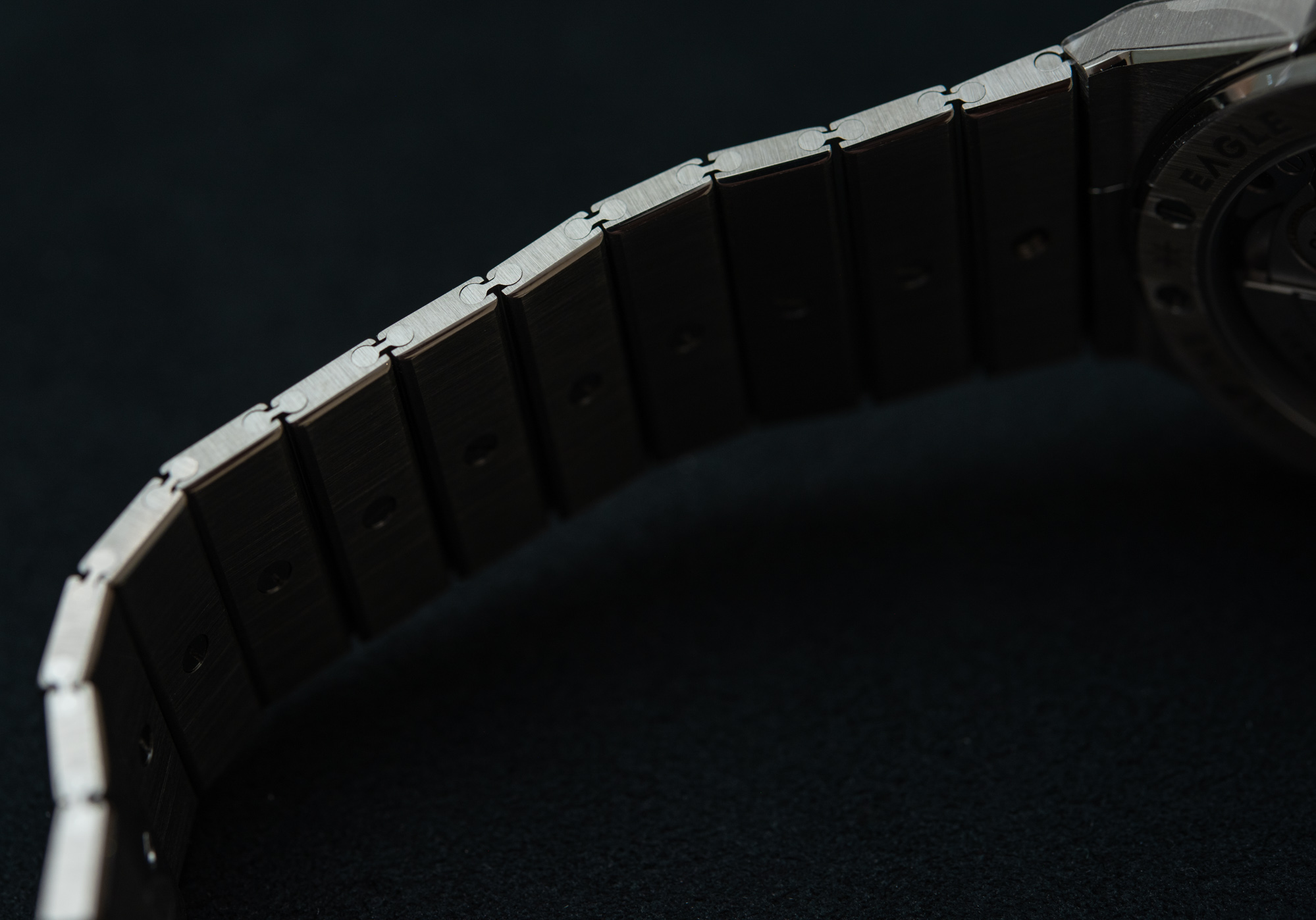 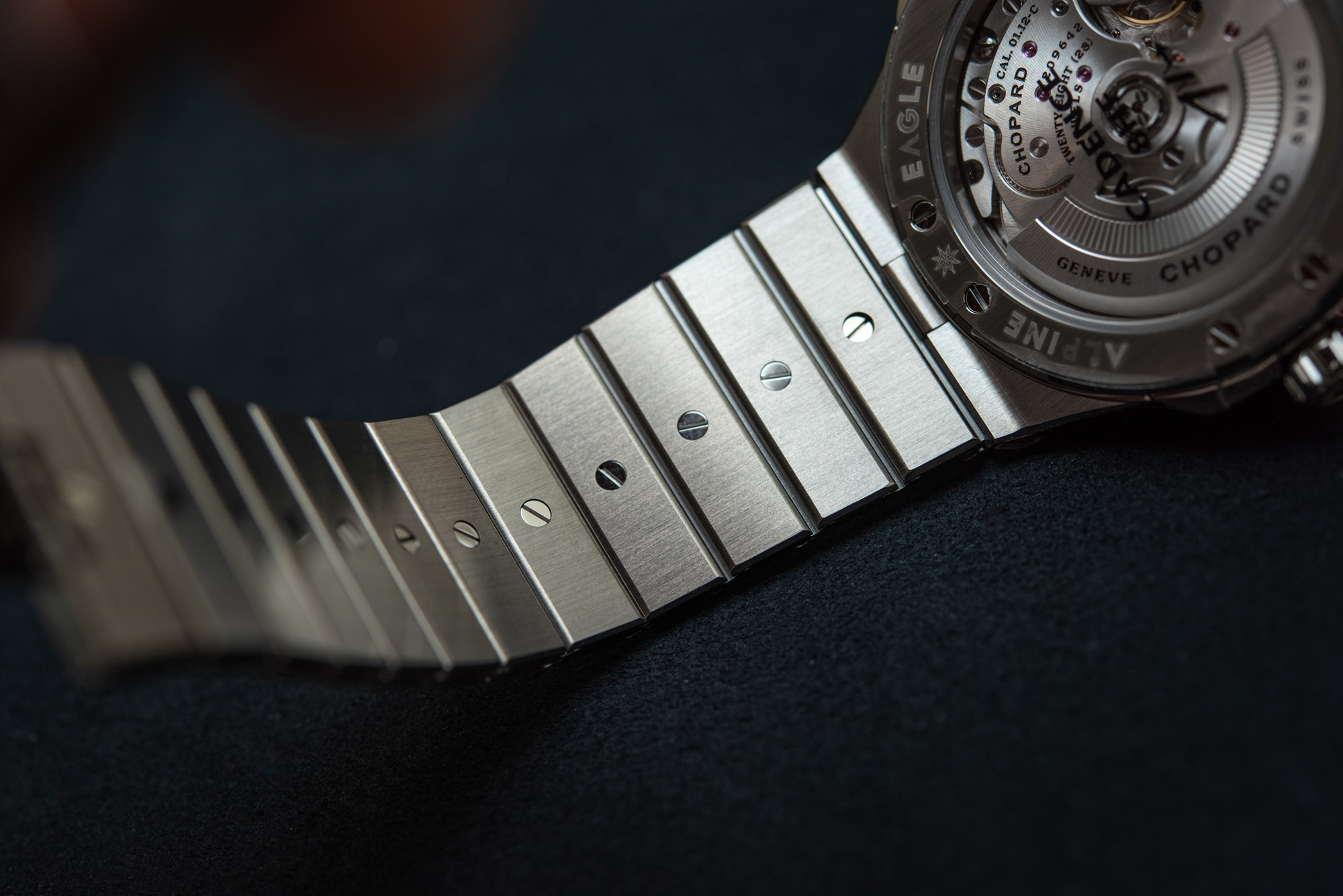 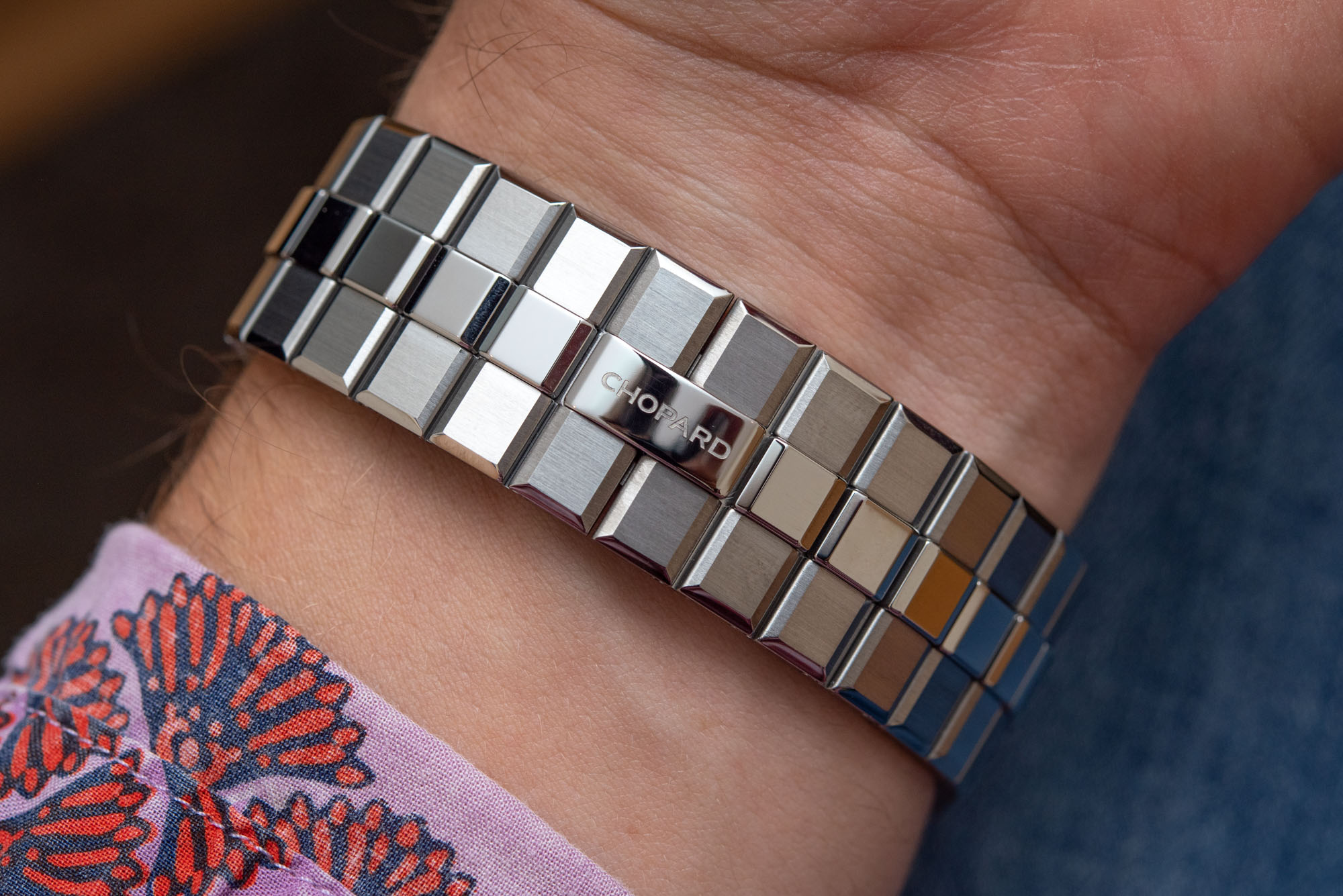 A hidden clasp adds a touch of elegance, as does the shockingly simple, yet robust-feeling construction of the links, whereas the bracelet is held together by one central screw combined with 8-shaped interlocking edges that allow the subsequent links to connect and swivel. A Royal Oak bracelet (arguably the benchmark in this segment) does not feel any more expensive, robust, or comfortable, though I’d love to do a side-by-side comparison under the same light. 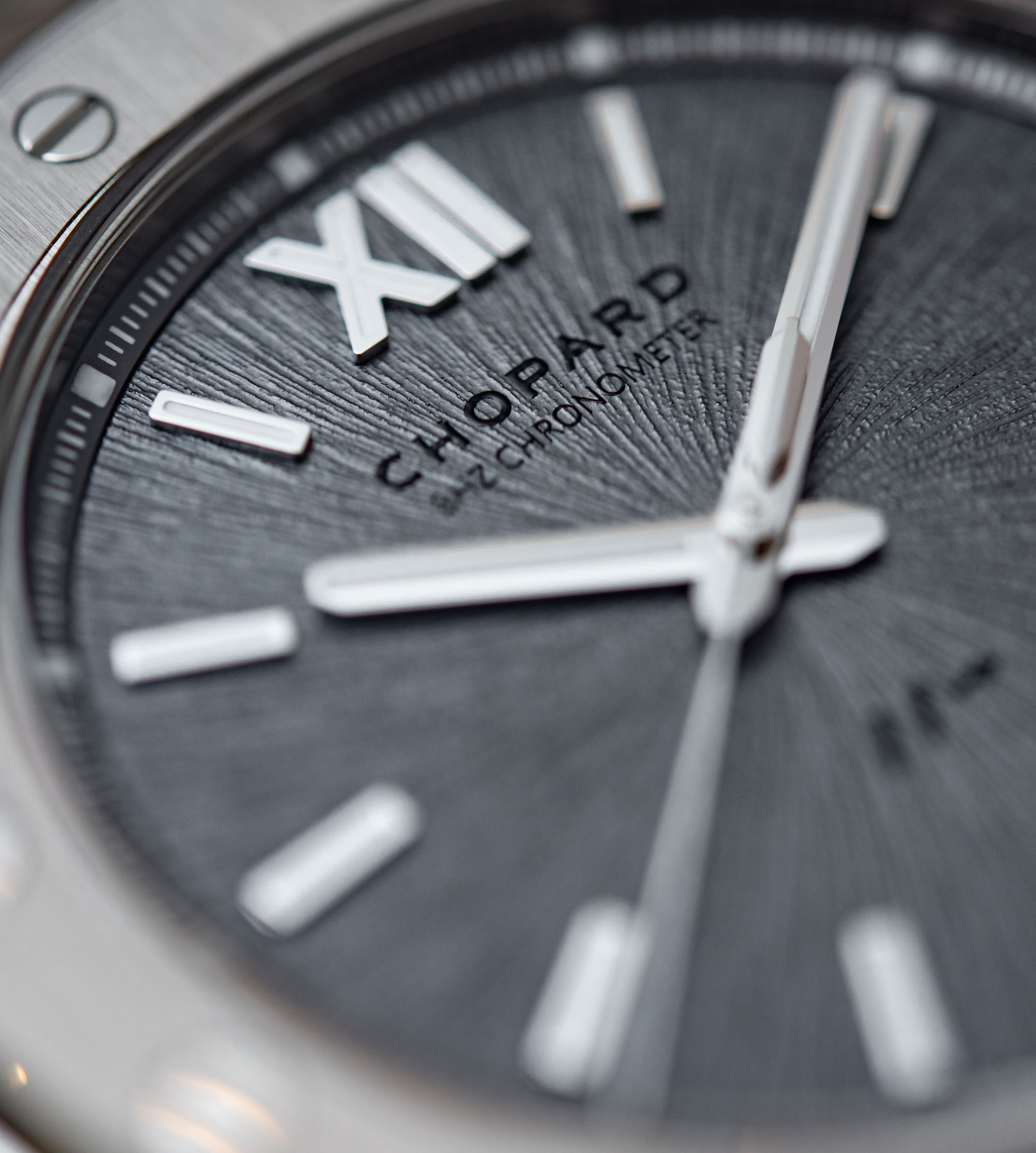 The dial remains the eagle-iris-inspired textured design which is a neat tie-in with the Alpine Eagle inspiration, but it makes me want something more flat and elegant. The Rolex Day-Date 40’s laser-etched dials specifically come to mind for those look a fair bit more high-tech and elegant (albeit also a lot more artificial) – attributes that would make for a good match to the Alpine Eagle’s exterior. Every hour marker and the two main hands are lumed, the seconds hand has a feather-like counterweight, and there is Chopard’s High-Frequency logo above the 6 o’clock marker. The date window appears huge, easily legible, and although some photographs indicate the contrary, neatly color-matched in real life.

Since its launch a few years ago, the Chopard Alpine Eagle has been the underdog of the luxury sports watch segment – and undeservedly so. The steel version, priced at around $12,000, is up there in exterior quality with the Royal Oaks and Patek Nautiluses of the world. This rather more expensive version adds a hefty premium, but then again, it is a practically unrivaled movement with proven performance and some genuinely impressive engineering.

Combined with an all-titanium exterior, proper luxury sports watch specs – thin case, good WR, extended power reserve, great legibility – this is a rounded package, offered at a rounded price: the Chopard Alpine Eagle Cadence 8HF is priced at $19,000 and is limited to 250 pieces. You can learn more at the brand’s website.