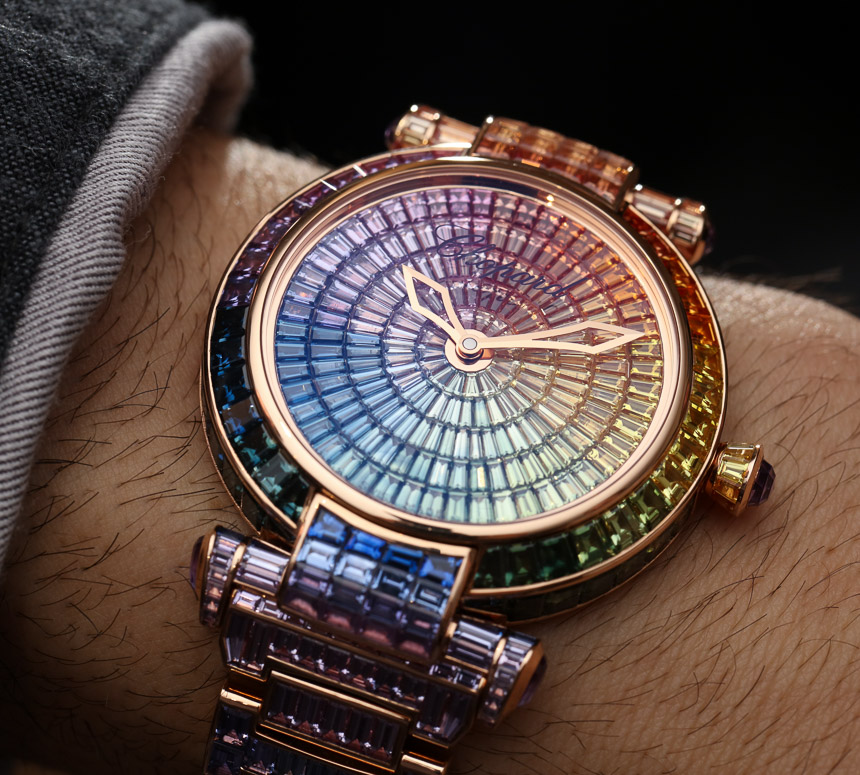 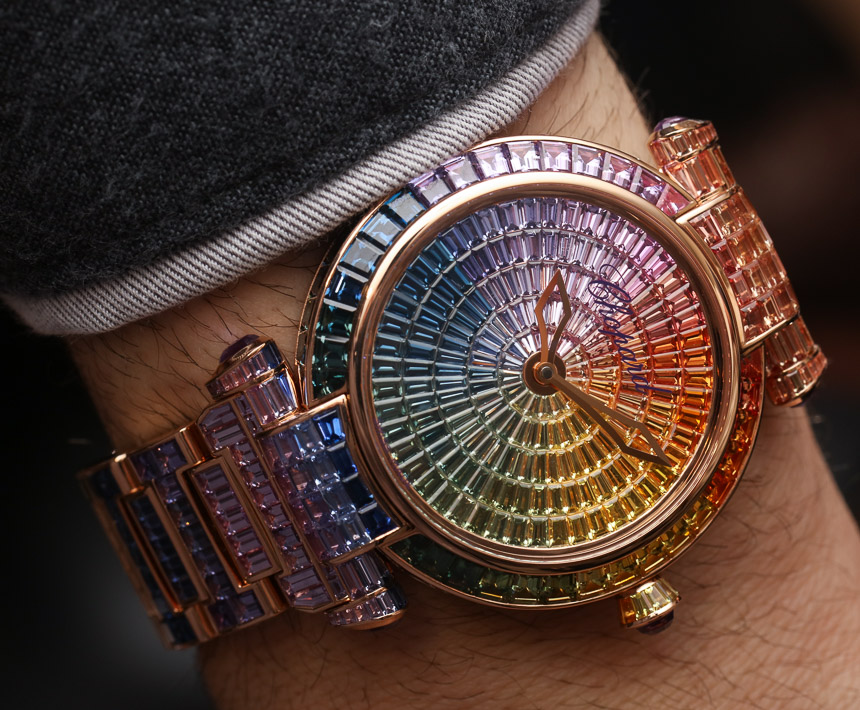 At Baselworld 2016, Chopard released this new haute joaillerie rainbow version of its 40mm-wide Imperiale watch. Strictly speaking, most people at Chopard would categorize this Chopard Imperiale Joaillerie Rainbow reference 384340-5003 as a women’s watch – and perhaps, for the most part, it is. With that said, there is something about being amidst oodles of jewelry watches that makes me feel… well, “experimental.” Designed for a woman but arguably sized for a man – with at least enough angular masculine aesthetic elements – is this the type of watch a guy could pull off in at least some parts of the world? 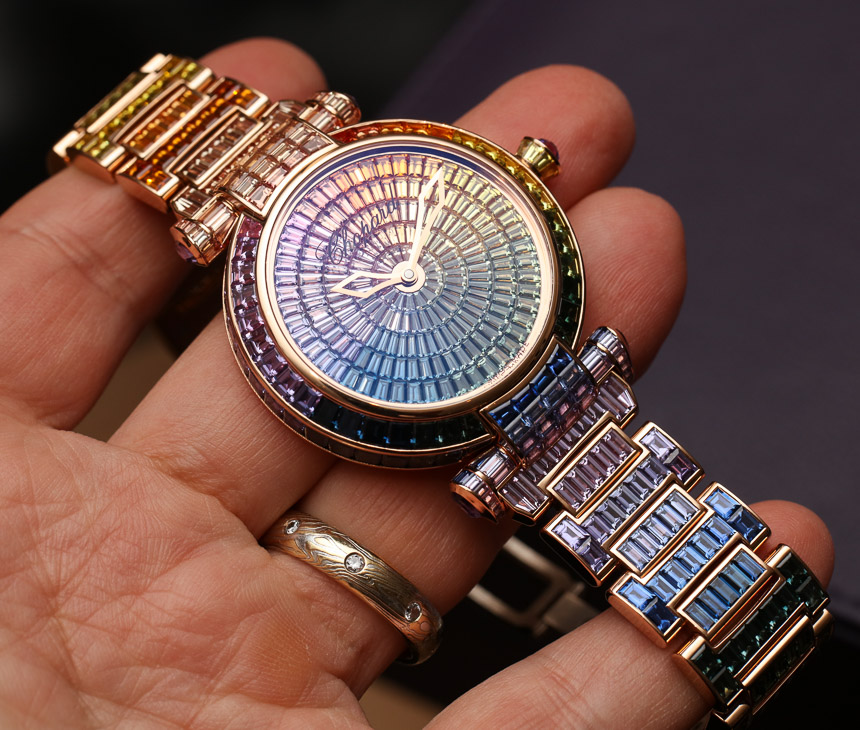 We Western watch lovers tend to joke about the fact that in the East, men are known for buying timepieces that in other parts of the world would be strictly feminine in their appeal. I have to admit that it is quite funny the first time you see a man with a serious look on his face donning an effeminate watch with flowers and brightly colored stones on it. I’ve seen it happen more than once “out in the wild” during my travels. It is possible that my cultural predispositions cause my opinions to be overly conservative in evaluating the appeal of these timepieces for the male wrist. Then again, it’s also possible that it is time to approach designs and colors seen as being “feminine” as sartorially appropriate for men. Think about how the color pink is a pretty mainstream choice for men’s apparel. Keep this in mind the next time you’re at a Brooks Brothers or Ralph Lauren store and you’ll agree, especially when you’re looking at Polos or shorts. 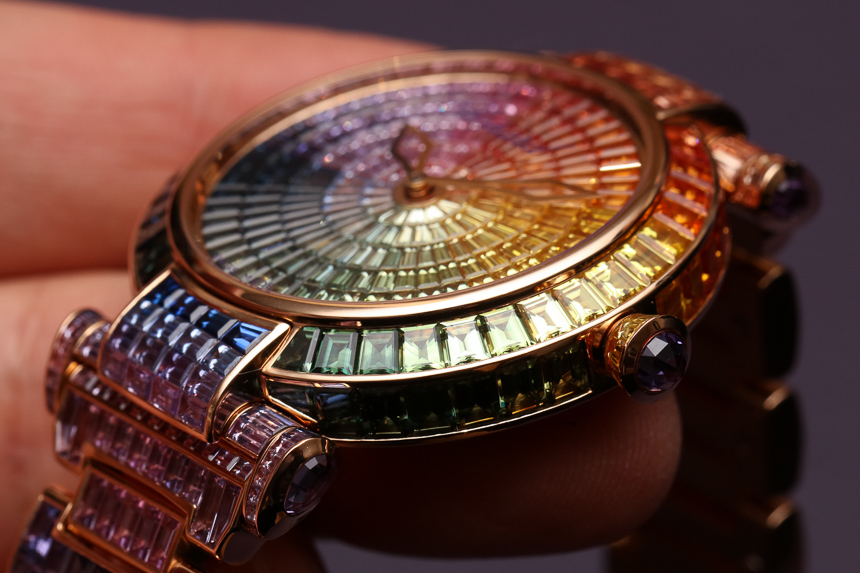 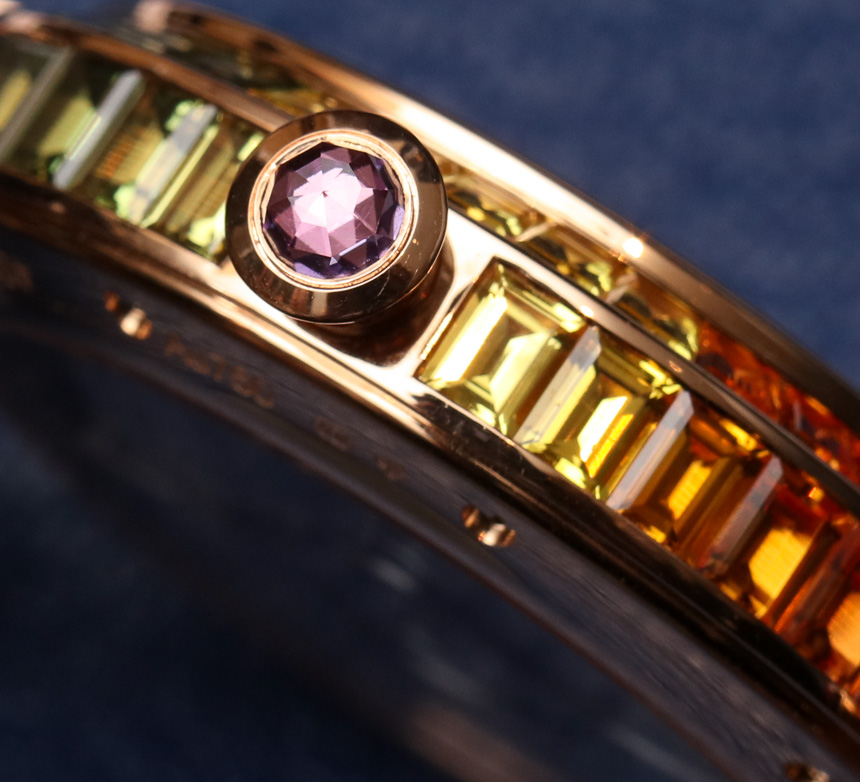 I’d like to assert that there is value in advocating for the rainbow to become mainstream again. In at least the United States over the last few decades, the rainbow has become the strong symbol of the homosexual community, and their successful political and social campaigns to further social equality and justice. Does that mean that the rainbow will remain a sign of that community, or will the rainbow’s colorful appeal have a chance to return to more widespread usage in the future? 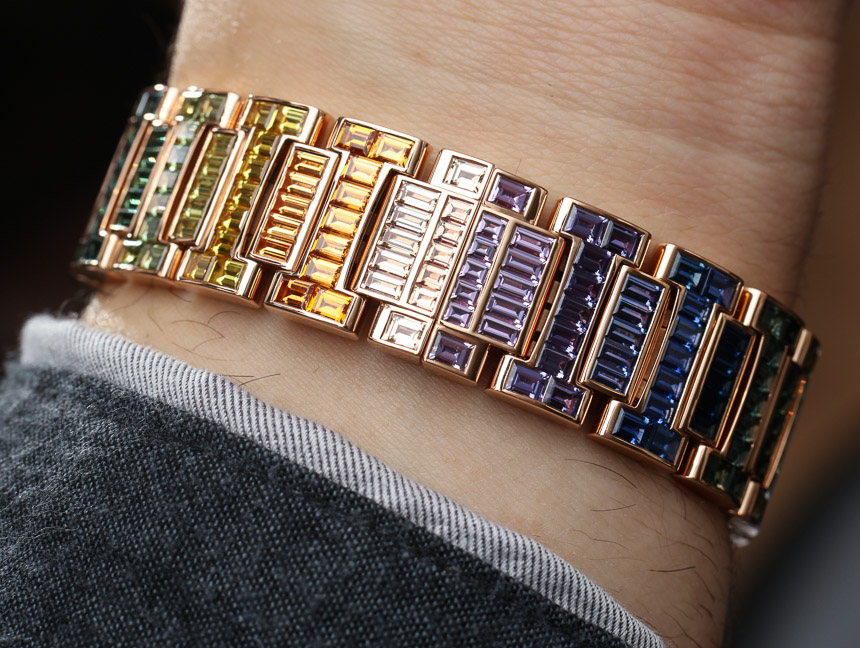 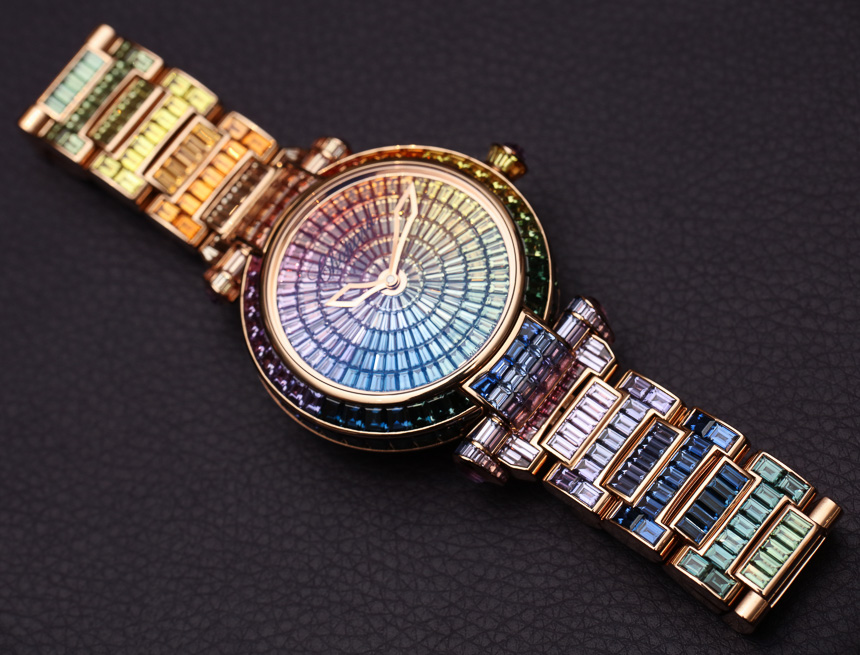 It might seem a silly topic, but I find it interesting when symbols are adopted by certain communities to the exclusion of others. This is often the case with colors or combinations of colors. The power of color to suggest a theme or social position is pervasive in our society and has been for hundreds if not thousands of years. Maybe I just like rainbows a lot and want them to be free for wider use. This is especially the case in jewelry watches like the Chopard Imperiale Joaillerie Rainbow where the case, bracelet, and dial use mostly sapphire stones to create a lovely rainbow-like blend of colors. 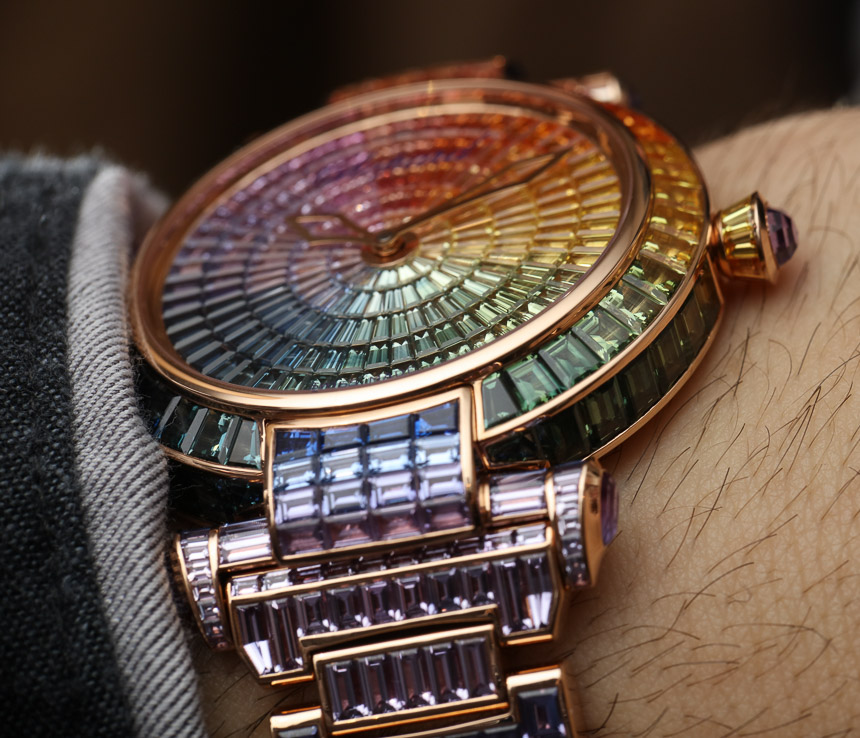 One of the most famous rainbow men’s watches is the Rolex Cosmograph Daytona with the rainbow stone bezel. An exotic flavor, for sure, Rolex was both loved and ridiculed for coming out with that particular version of the Daytona. Rainbow stone watches are not terribly uncommon in the watch world, but as a serious men’s watch, they certainly are. It becomes an ongoing area of divisiveness among watch lovers as to the acceptance of timepieces that have any feminine attributes – at all. Just look at the difference of opinion collectors have when it comes to wearing a watch decorated with diamonds. 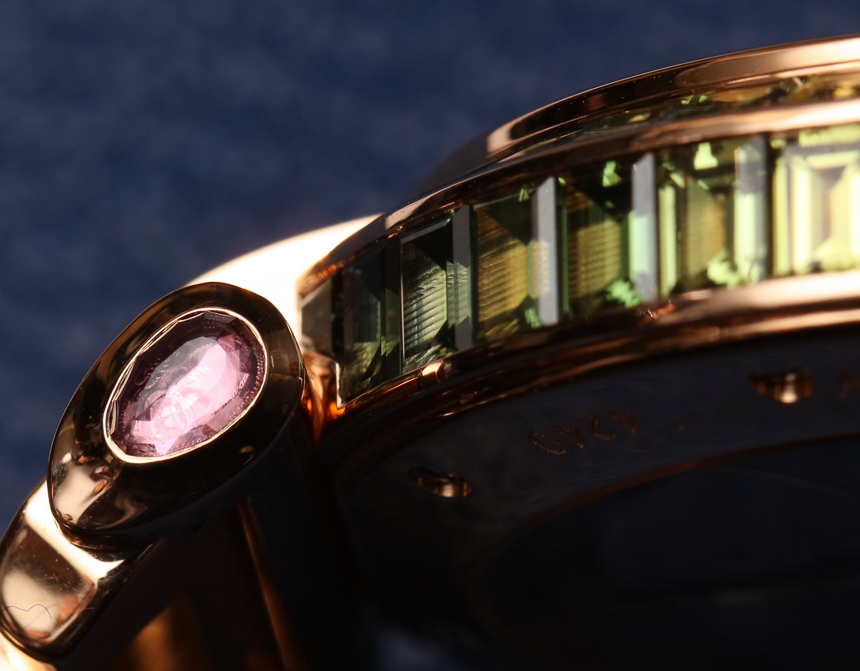 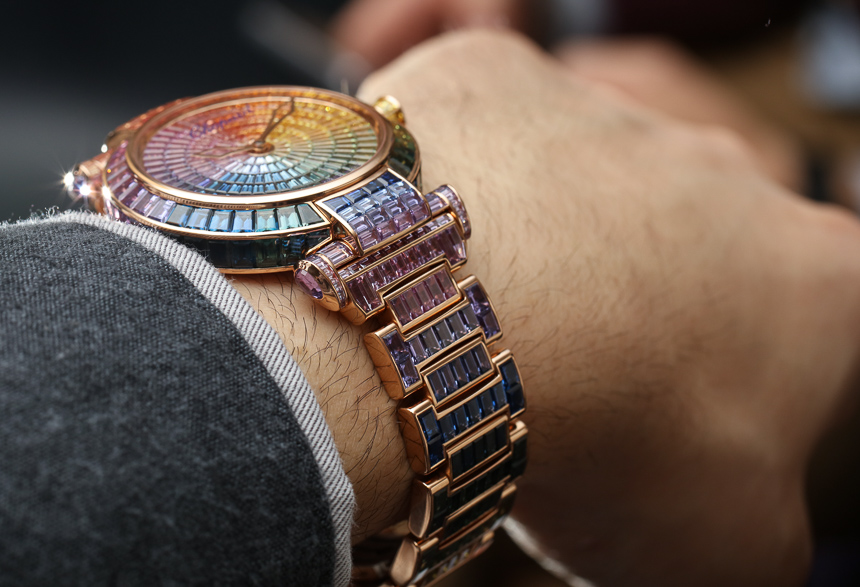 I’ll not deny that, like many people, I am attracted to shiny, fancy things. Putting the Chopard Imperiale Joaillerie Rainbow on my wrist while “in Rome” at Baselworld is, perhaps, a symptom of the environment which makes conduct like that feel more OK. I might very well not have engaged in the same behavior if I were to see this watch in a Chopard store back here in the States. With that in mind, looking at the images of the watch on my wrist, I feel that I like it, even if I can’t imagine a scenario that I could pull it off. 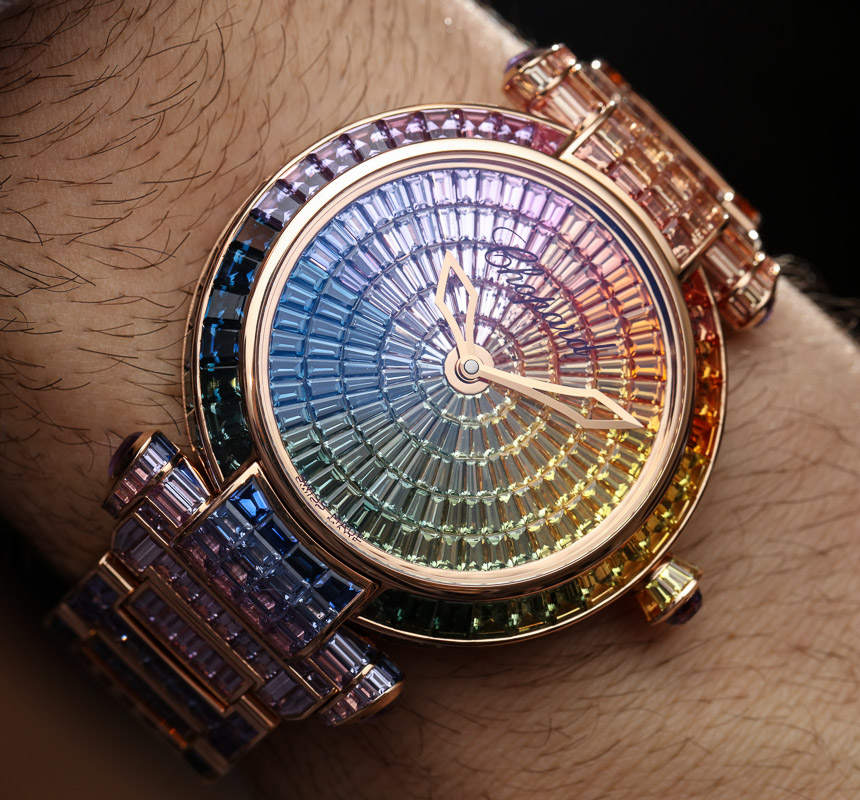 The Chopard Imperiale collection tops out with watches like this, and the current largest size of an Imperiale-style watch is 40mm wide (with other models being smaller). Even at Chopard, there is disagreement as to whether or not this timepiece has masculine appeal or not. I tend to think it has at least enough, even if it will never be on par with something like a Chopard Mille Miglia. 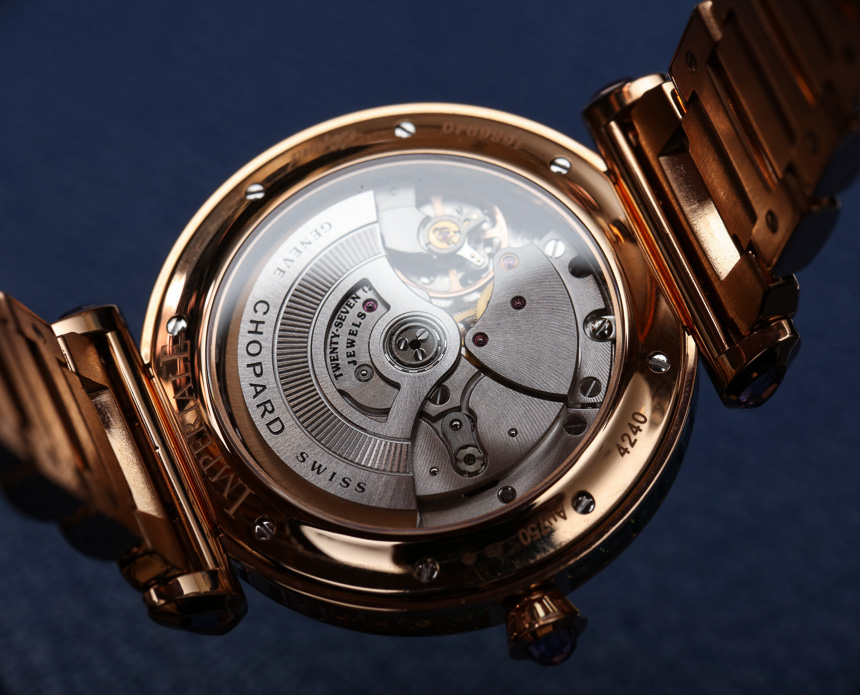 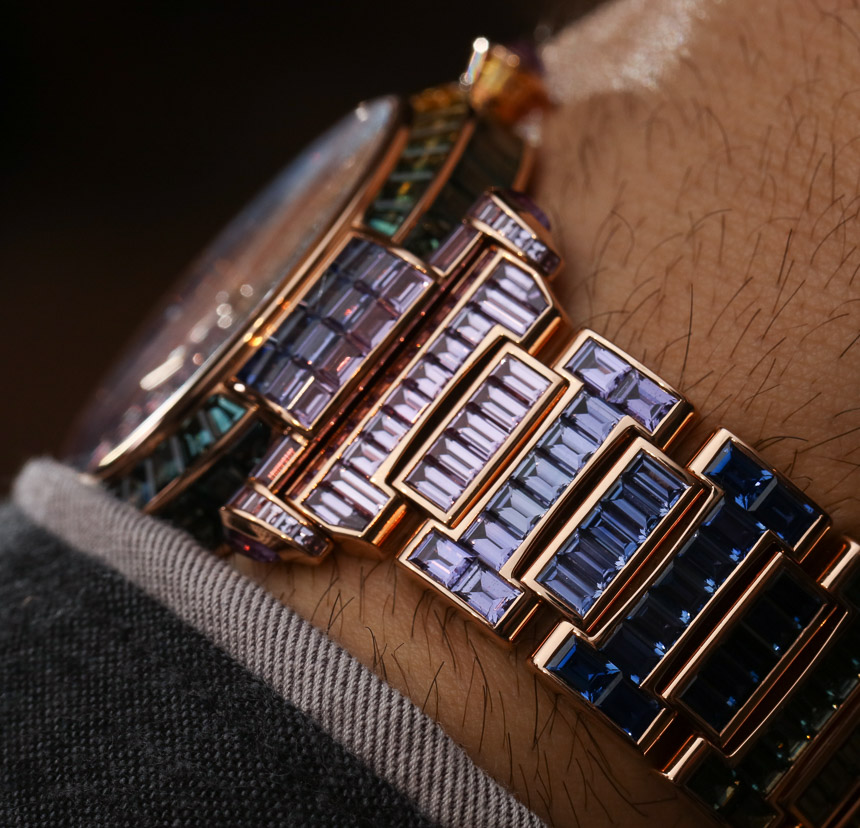 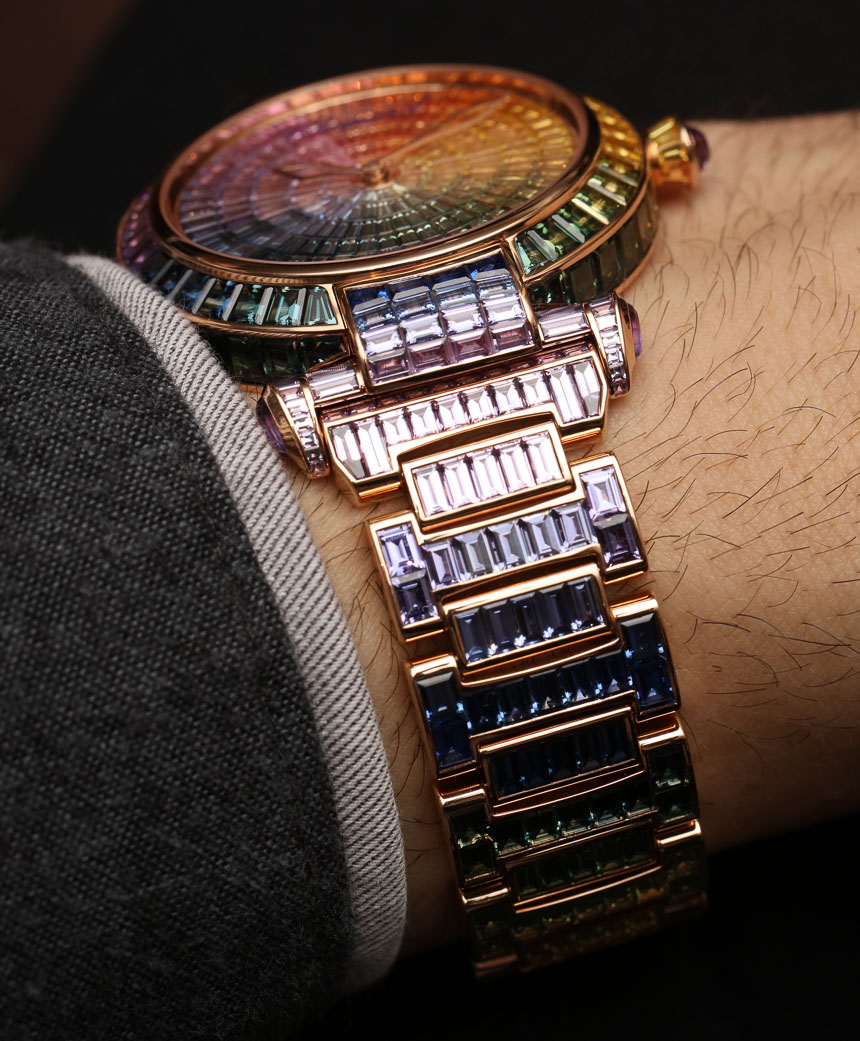 This 384340-5003 version of the Imperiale comes in all-18k rose gold with a matching bracelet. The entirety of the watch is covered in a total of 581 stones totaling a reported 47.98 carats. The majority of stones are colored sapphire crystals, but some of them are various tones of purple amethyst. Chopard claims “1,012 hours” in the selection, cutting, and setting of the stones – which isn’t a stretch, as the jewelry-setting departments of the watch brands do, in fact, need a lot of time and resources to produce these massively color-intensive timepieces. Rolex, for instance, shared that it takes, on average, two full weeks to find, cut, and set each Rolex Daytona Rainbow bezel. Given that this Imperiale is totally covered with rainbow-style stones, it is not surprising that the production time is much longer. 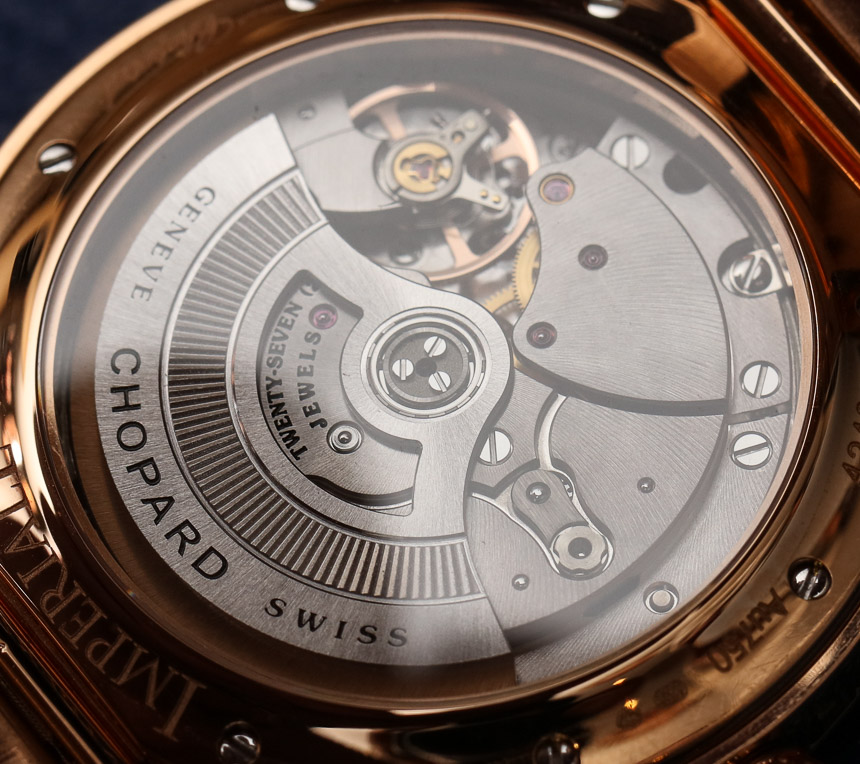 Inside the watch is an in-house made Chopard movement. The Chopard Imperiale Joaillerie uses the Chopard caliber 01.03-C automatic movement produced by them at Fleurier Ebauches. Visible through the sapphire crystal caseback window, the movement is a step below the higher-end L.U.C range movements, but given that it just tells the time, it should operate just fine. Legibility isn’t terrible either – which is a surprise. The 01.03-C movement further has a power reserve of 60 hours and operates at 4Hz (28,800bph). 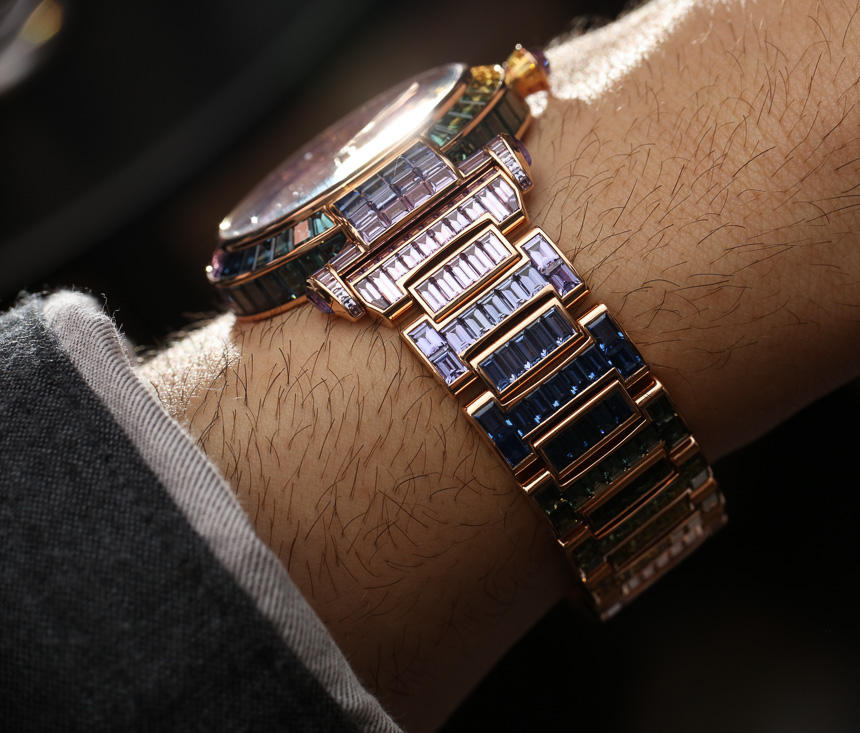 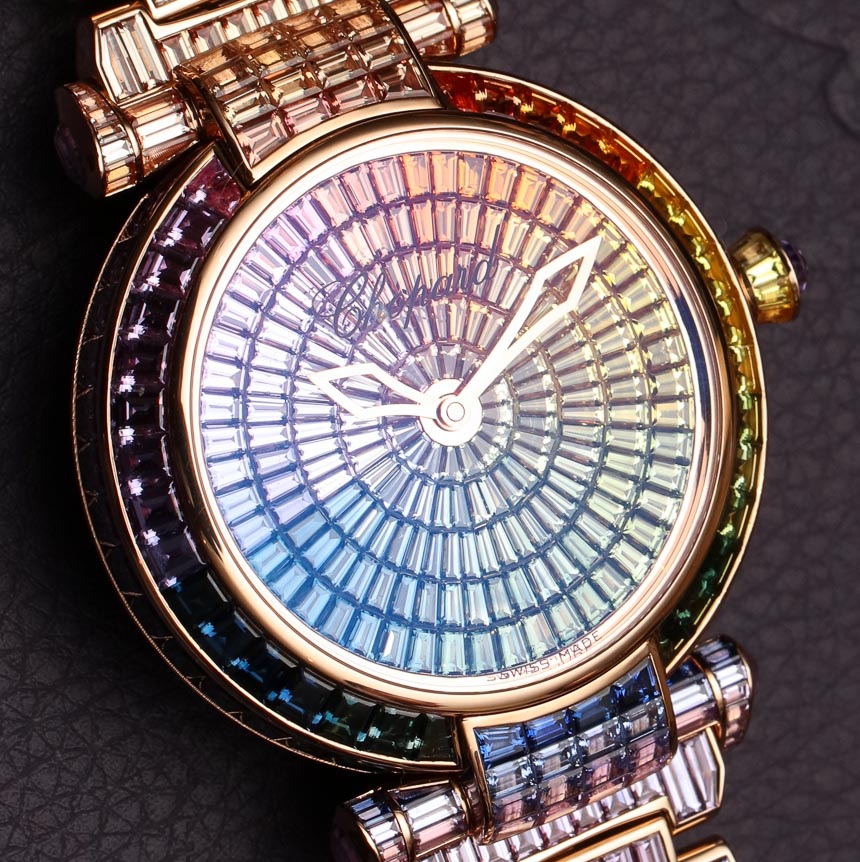 Probably for her and perhaps for him, the Chopard Imperiale Joaillerie Rainbow is a beautiful luxury object, in my personal opinion – no matter who is able to pull it off on their wrist. It isn’t a limited edition per se, but aside from a few pieces produced for display purposes, the reference 384340-5003 will be made “on order,” as the time involved in the production of each is rather intensive. Chopard is further sensitive about sharing the precise price of these and other high-end objects because they claim their customers want discretion in terms of the value of the items they buy. 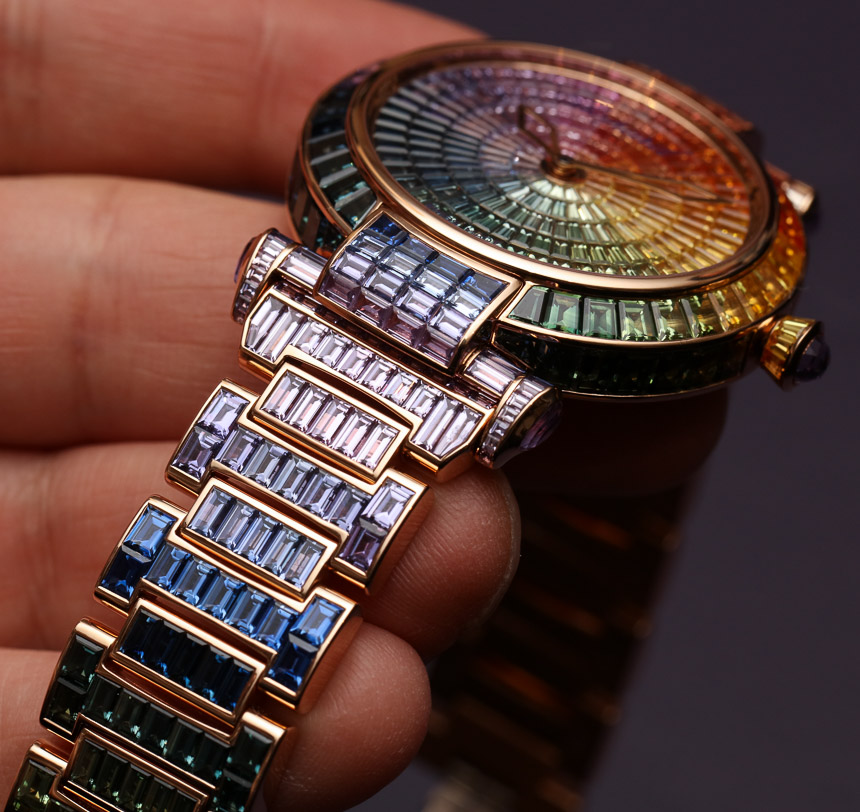 I understand this sentiment, but I also don’t think anyone is of the impression that a fully stone-set gold watch is anything but “expensive,” even if they don’t know the exact retail price… which, in this case, is around $600,000 USD. chopard.com