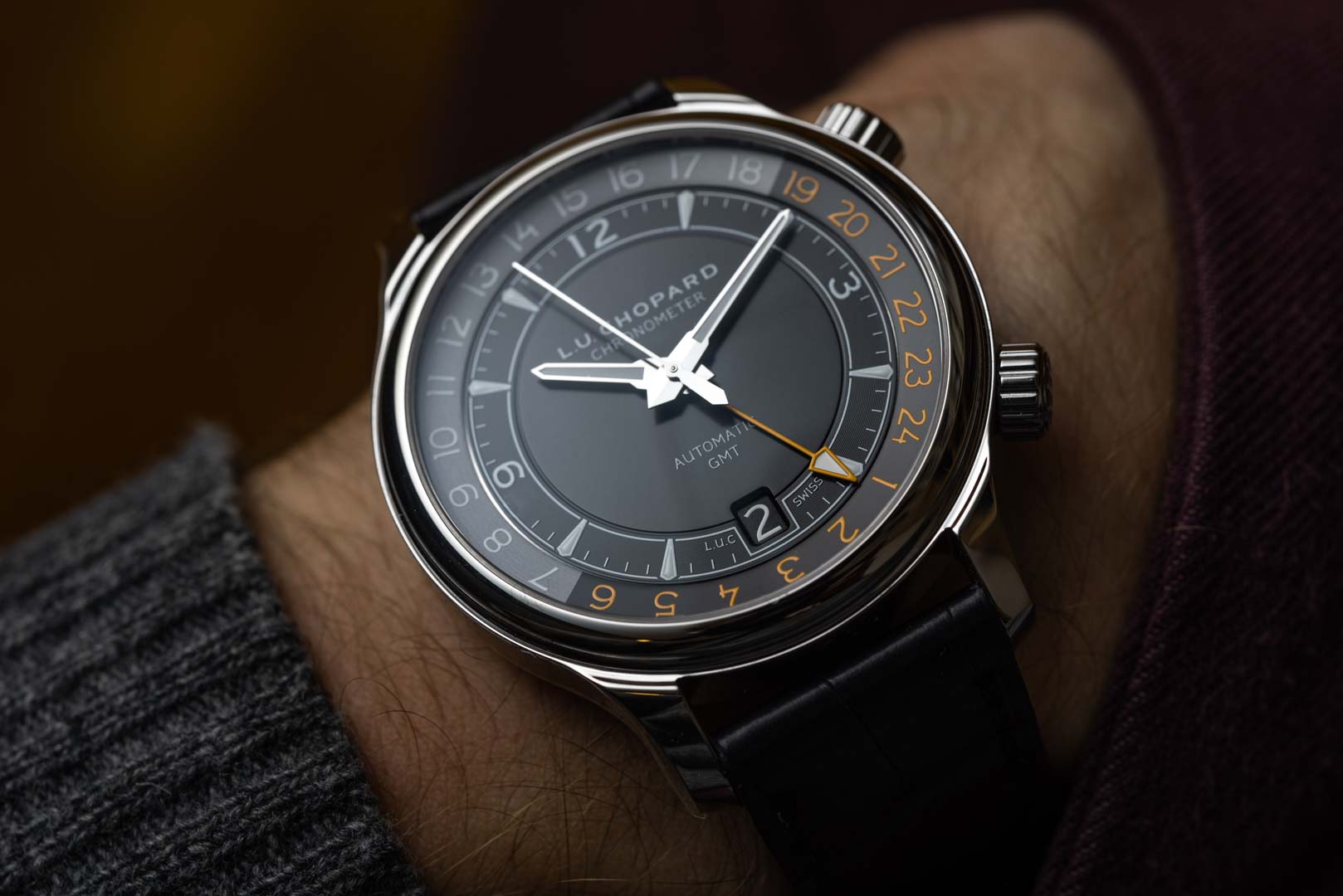 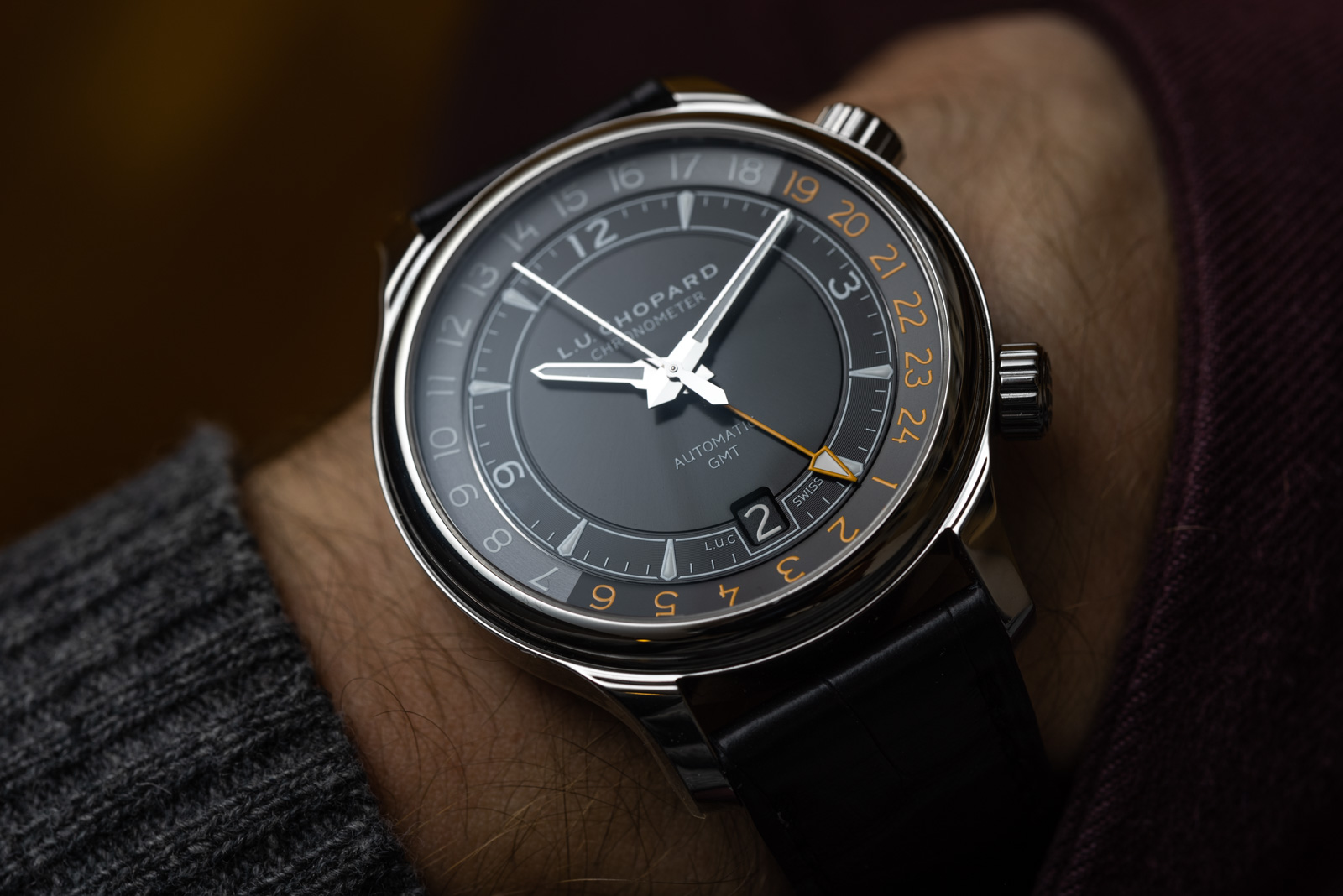 L.U.Chopard, or L.U.C for short, stands for yet more high-end variations of the luxury watches made by Chopard, the Fleurier-based independent watch manufacture. Invariably equipped with juicy in-house calibers, recent years saw L.U.C introduce more competitively priced models in stainless steel, ranging between $8,190 and $13,700. From then on, it’s all gold and platinum. In for review is the Chopard L.U.C GMT One in stainless steel — and I’m curious to see if this could be the thinking man’s luxury GMT. 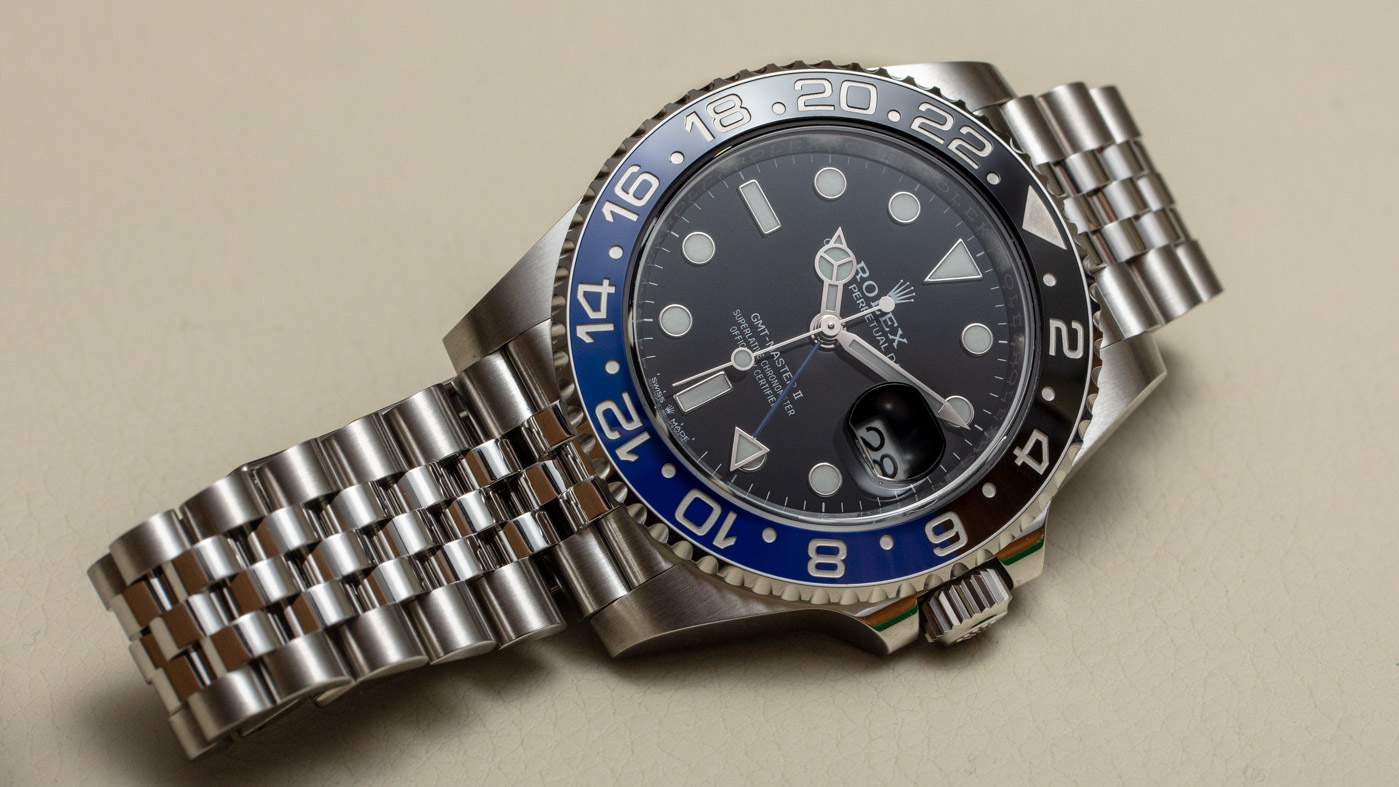 When you say GMT, I say Rolex. Not because I wish to imply theirs is the absolute best (there’s no such thing in watches), but because it seems to be the GMT that so many around the world think they need to quench their thirst for a daily-wearable, luxurious watch with a piece of additional functionality that they can actually use. And yes, that’s where the Chopard L.U.C GMT One reference 168579-3001 comes into the picture. 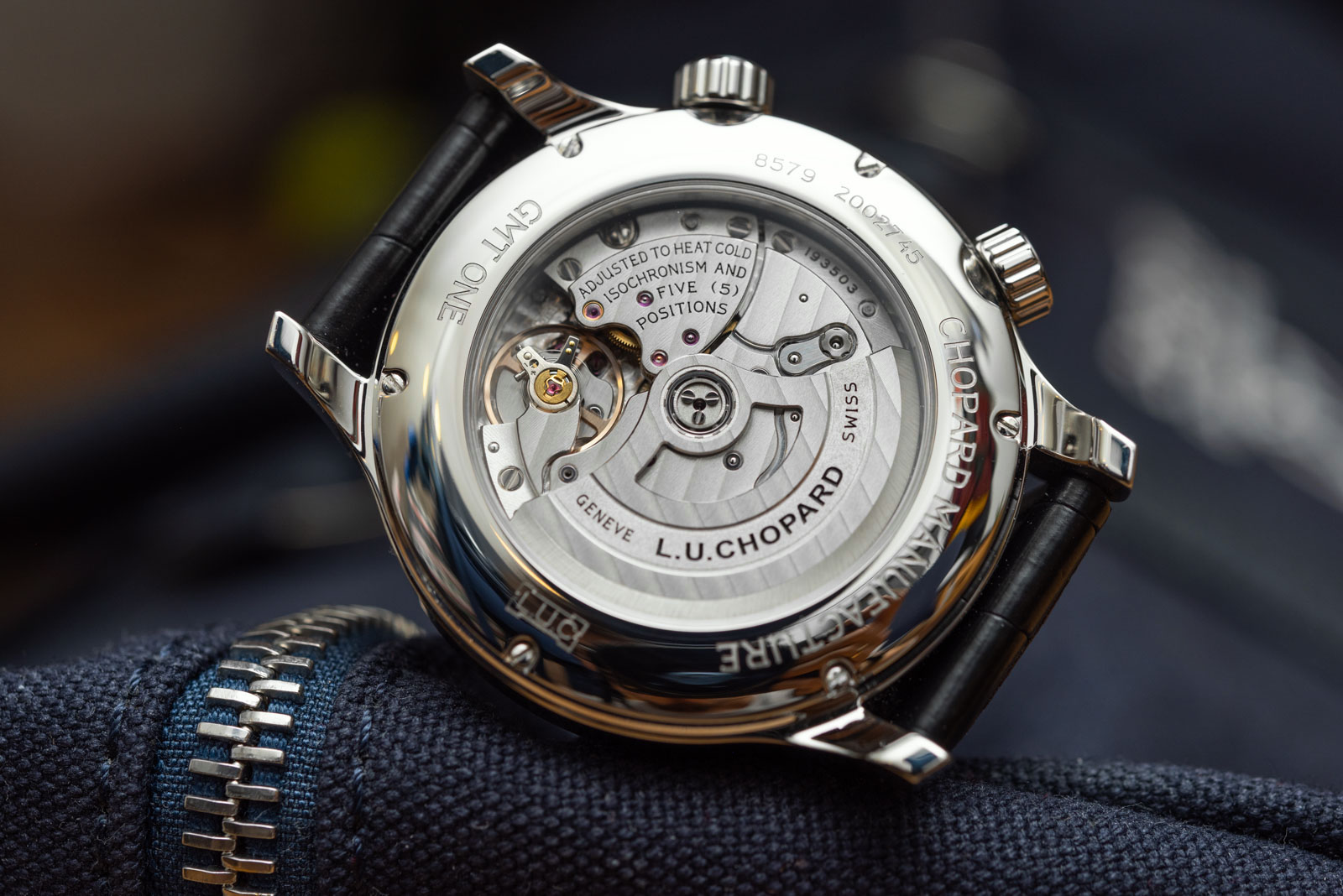 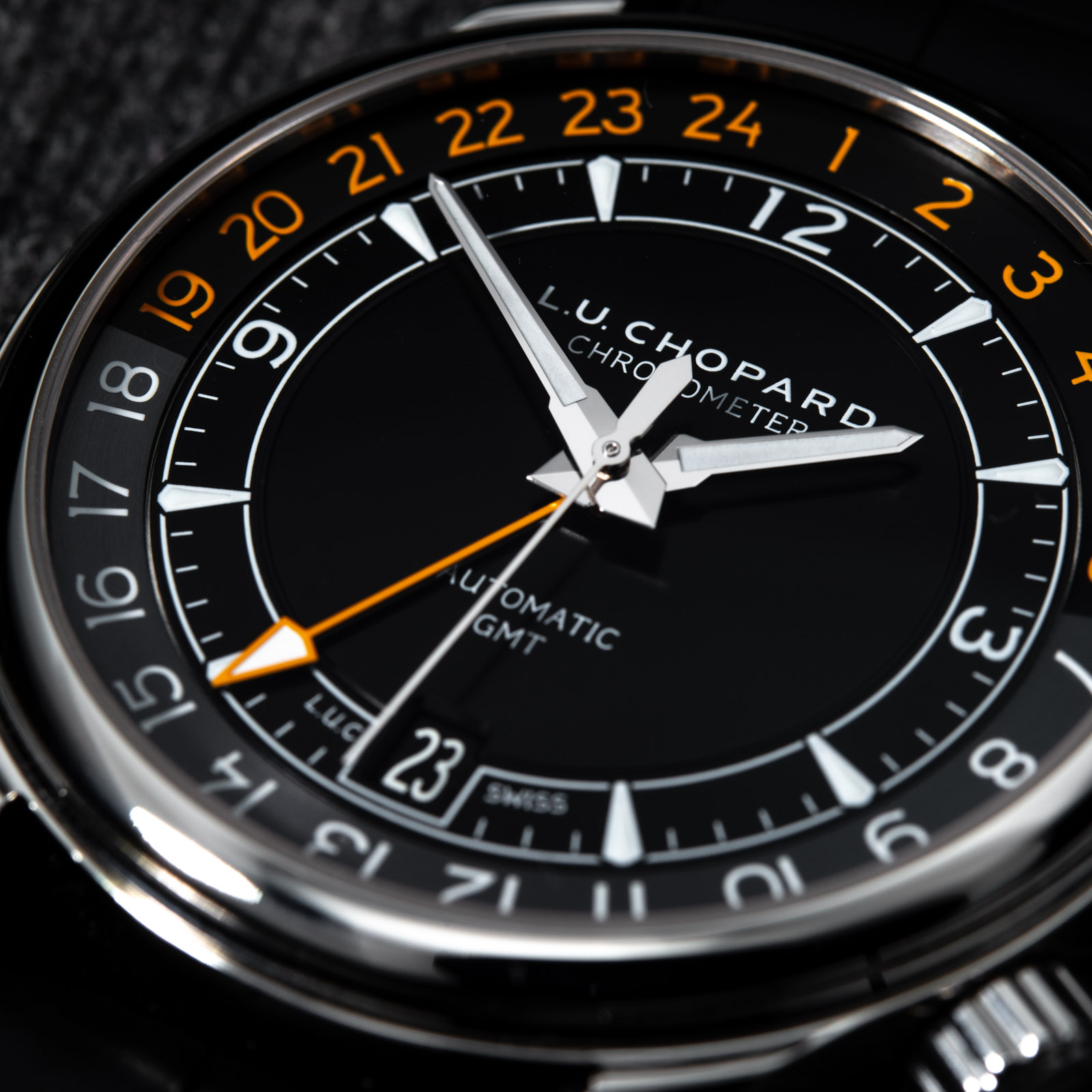 Priced at $10,200 (or 9,880 Swiss Francs), the L.U.C GMT One retails for just about the same price as Rolex’s stainless steel GMT — but out here, in the real world, it runs for several thousand dollars less, considering the frankly stupid secondhand markup on the latter, not to mention the equally incomprehensible waiting times at retailers. And with that in mind, I don’t find it a stretch to try to see if this GMT One is something for the thinking man. 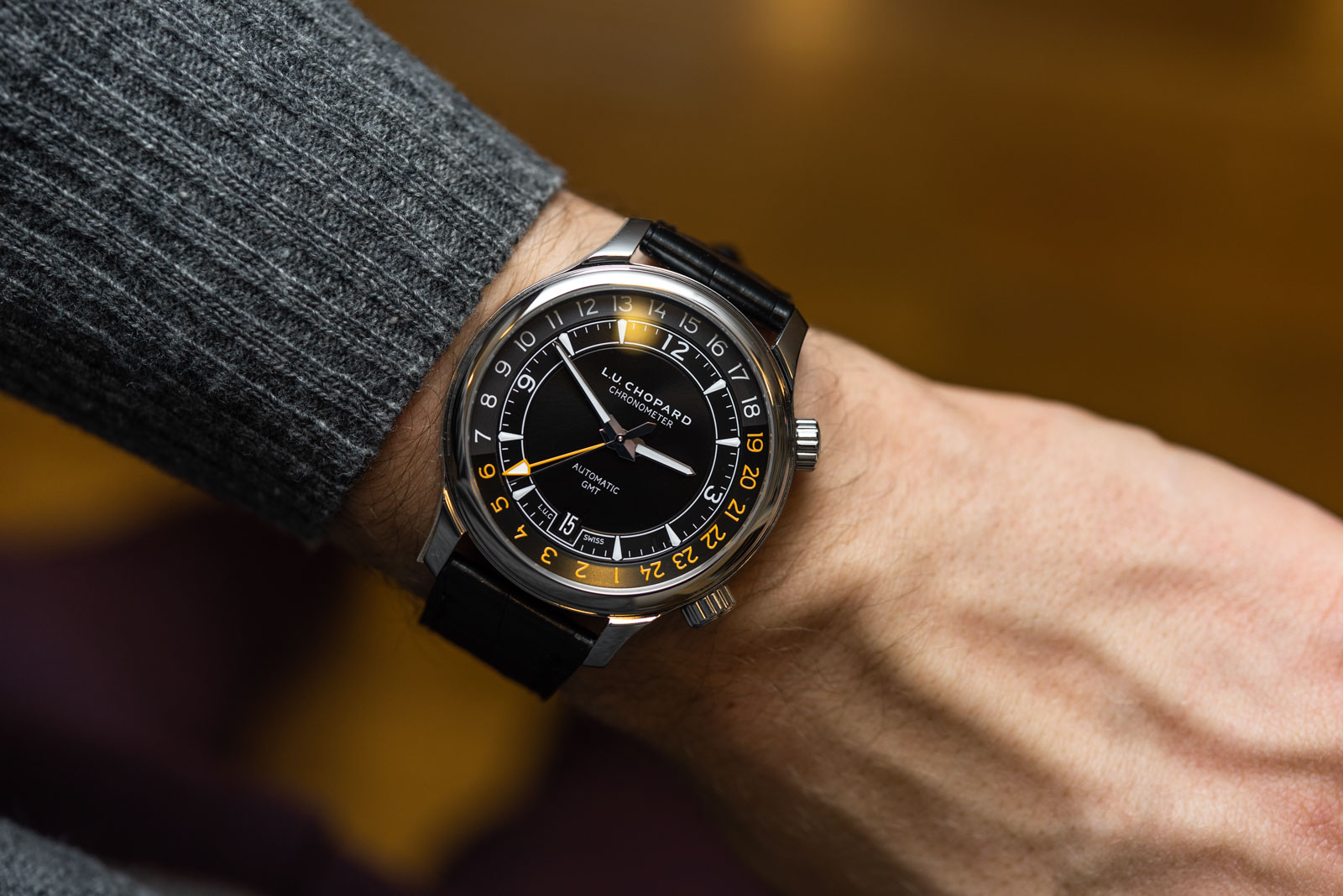 Design & Wearability Of The Chopard L.U.C GMT One

Although the L.U.C GMT One is incomparably rarer and, therefore, at least in some ways more interesting than your run-of-the-mill alternatives (which you can see multiples of in any given check-in line at the posher airports of the world), it doesn’t mean that it’s needlessly exotic or off-the-wall. The first impression it creates is a rather more grownup one, ditching a bracelet for a mighty black alligator leather strap with matte square plates, hand-sewn matching tones, and brown alligator lining. It’s the handmade alligator sandwich that Chopard likes to use on its watches, something that both looks and feels expensive. Unlike a bracelet, it certainly isn’t water resistant, though. 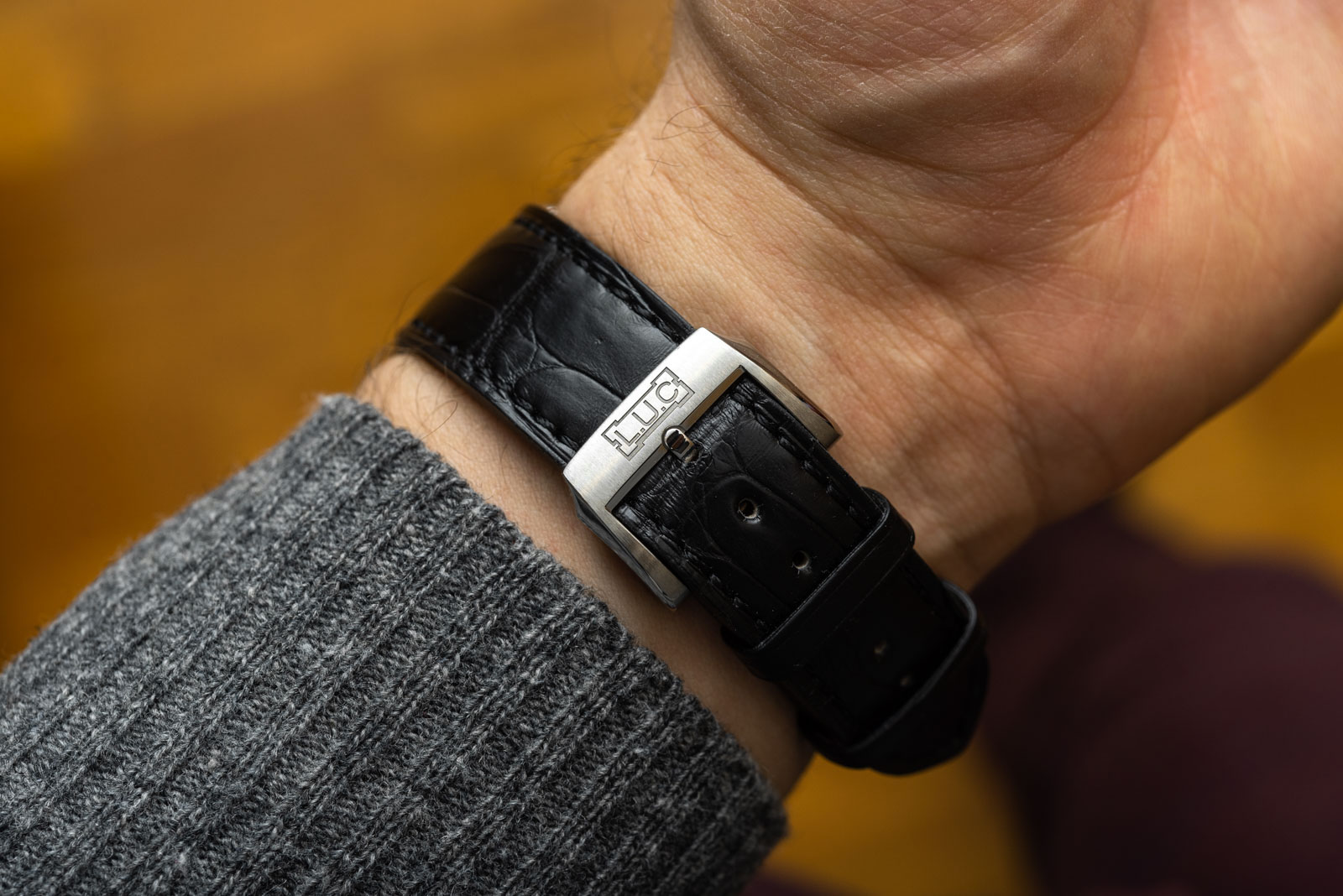 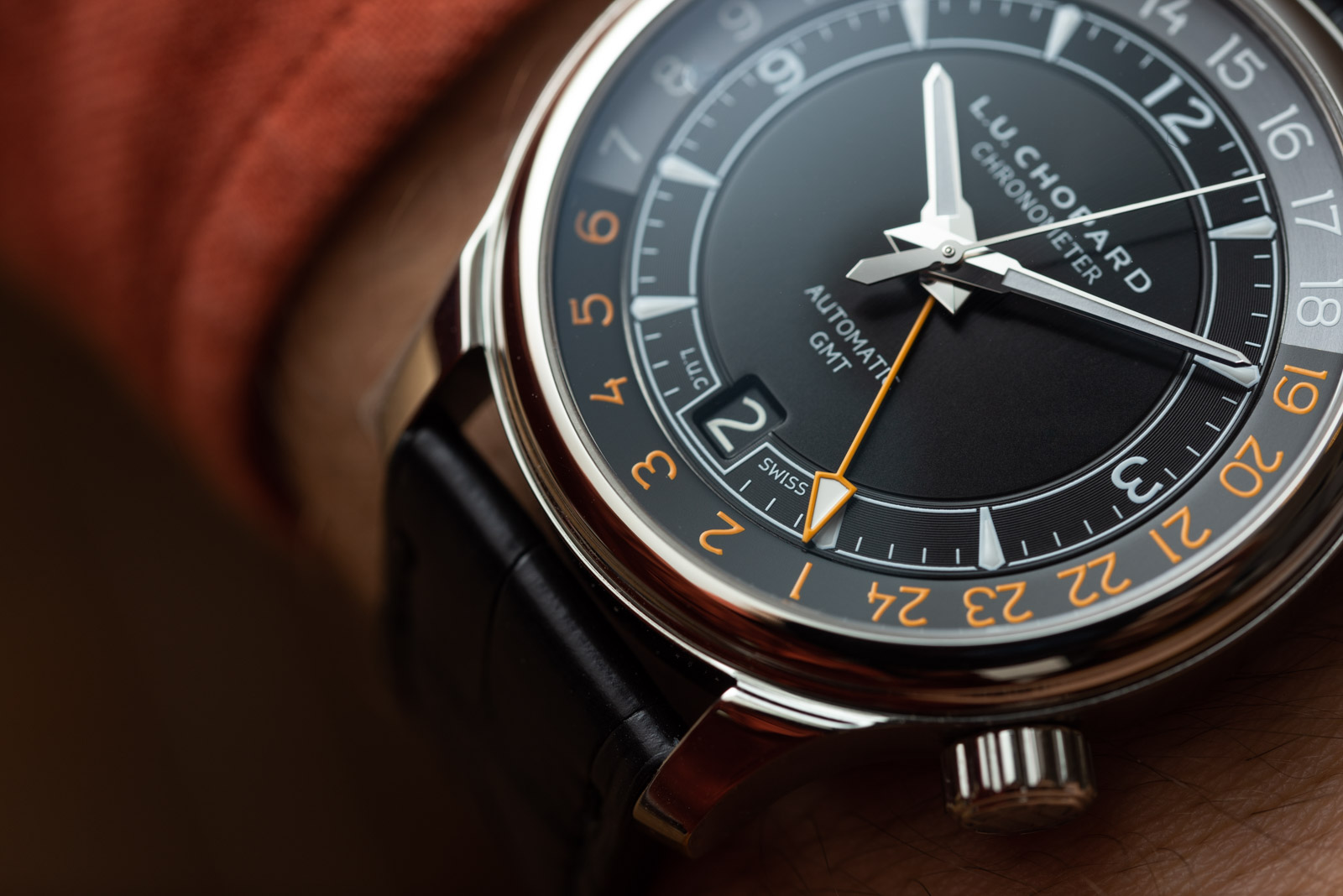 The 42mm case size features a thin bezel and a wide dial. Although there is a grand total of just 13 orange elements over tastefully combined variations of whites, grays, silvers, and blacks, the orange components do very much leave their noticeable mark. Despite this youthful touch, in the metal, the GMT One’s impression remains that of an elegant and grown-up watch more than anything else. This may totally be just me, but when I look at this watch, on this strap, with this slightly larger case, I picture a customer in his 40s or 50s, someone with a more mature taste in his clothes, style, and choice of accessories — notably, where mature does not equate dull. 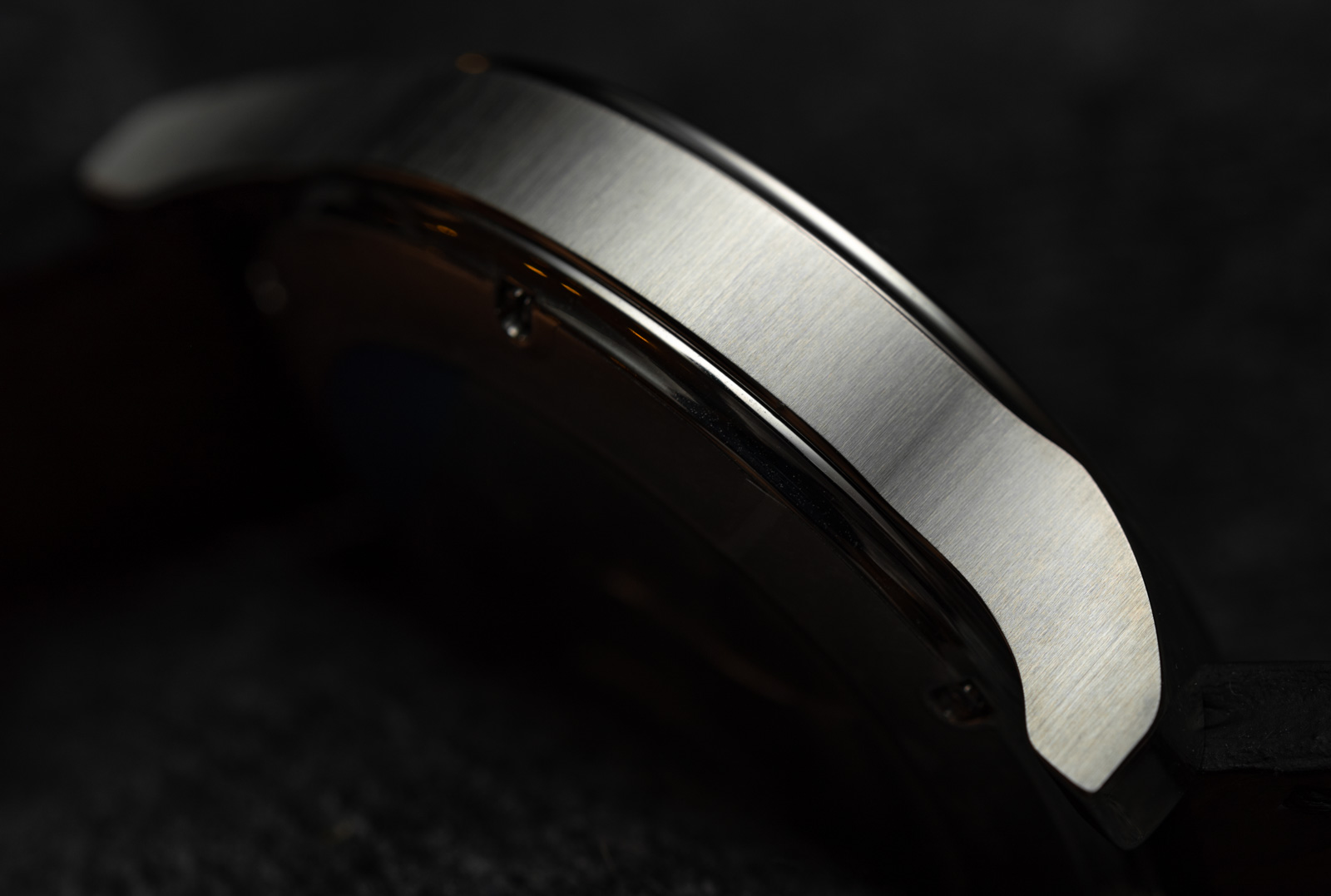 Case Of The Chopard L.U.C GMT One

The 42mm-wide case is just 12mm-thick, but the case profile (including bezel, case band, and caseback) that your eye picks up is under 8mm. Once you’ve worn a thin watch, chances are that you’ll be reluctant to strap something bulky and tall and wobbly around your wrist. The two crowns are almost as tall as the entire case, which means that they are large enough to make them reasonably comfortable to use. I can’t say for sure, but a 3 and 10 o’clock setup for the two crowns, perhaps, would have been a favorable solution, making the GMT One appear more like a traditional watch when its right side peeks out from under a shirt’s or jacket’s sleeve. It isn’t like you’d be using the GMT’s crown that often anyway — maybe a few times a week, tops, if you are a frequent traveler. Water resistance is 50 meters, which in the real world is perfectly enough to give you peace of mind during an accidental splash or immersion. I wouldn’t say the same thing about the 30-meter rating on, say, the Panerai Luminor Due. 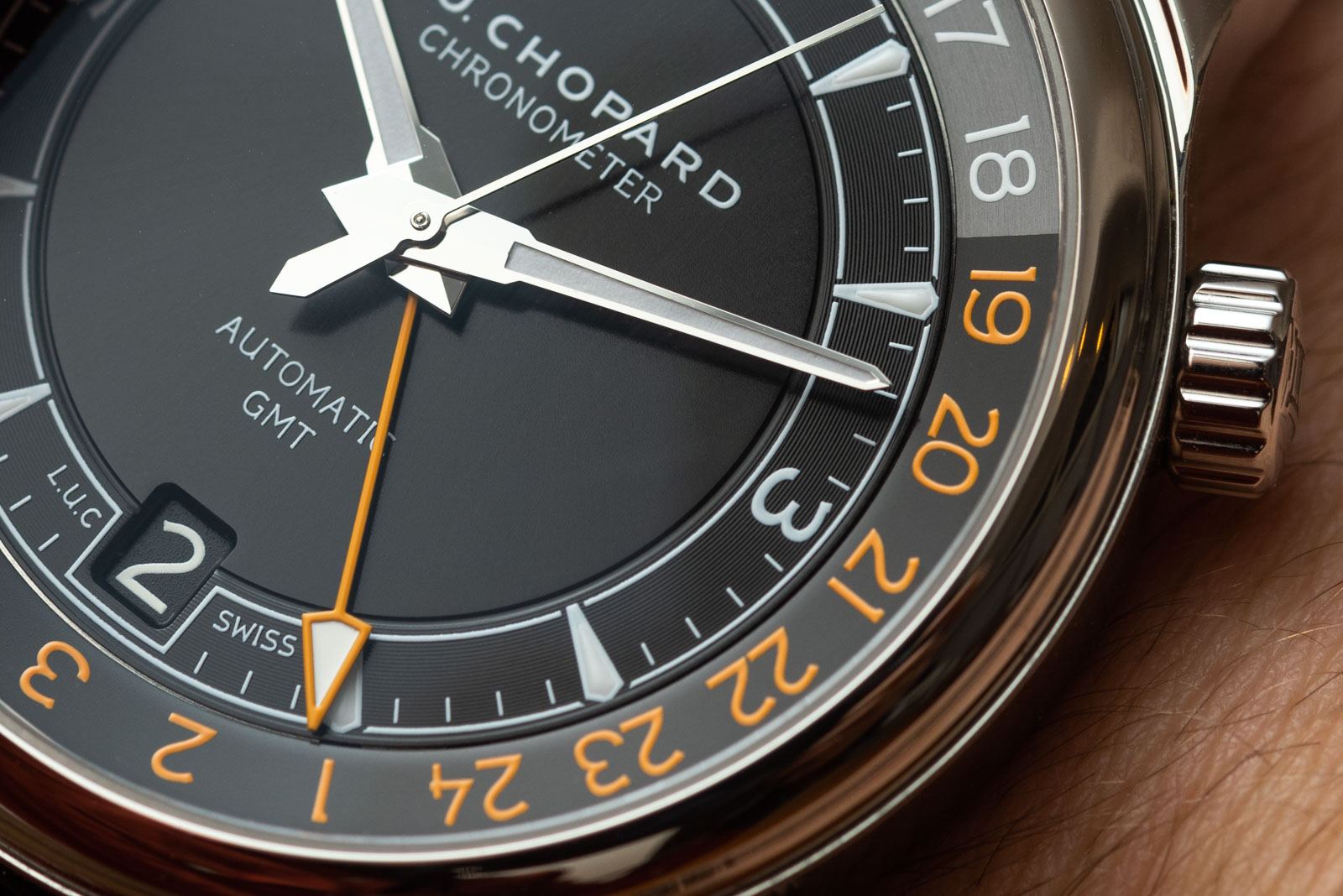 Legibility Of The Chopard L.U.C GMT One

The hands are those trademark Chopard L.U.C hands that never fail to remind me of the Chrysler Building. They are brightly polished on both their facets, but its precisely because of those facets that they remain so beautifully legible under all circumstances. Much like a black mirror-polished component in ultra-high-end watch movements, the polished surfaces either have a chrome-like, bright look, or a dark one — properties that only quality components possess. Chopard also had the brains to put shiny hands over a matte-ish dial… The temptation of “all shiny everything!” is so large not even Rolex can escape it — and that’s true not only for the temptation itself, but also for its consequential detrimental effects on legibility. Matte hands over shiny dials, shiny hands over matte dials is where it’s at. It’s simple. 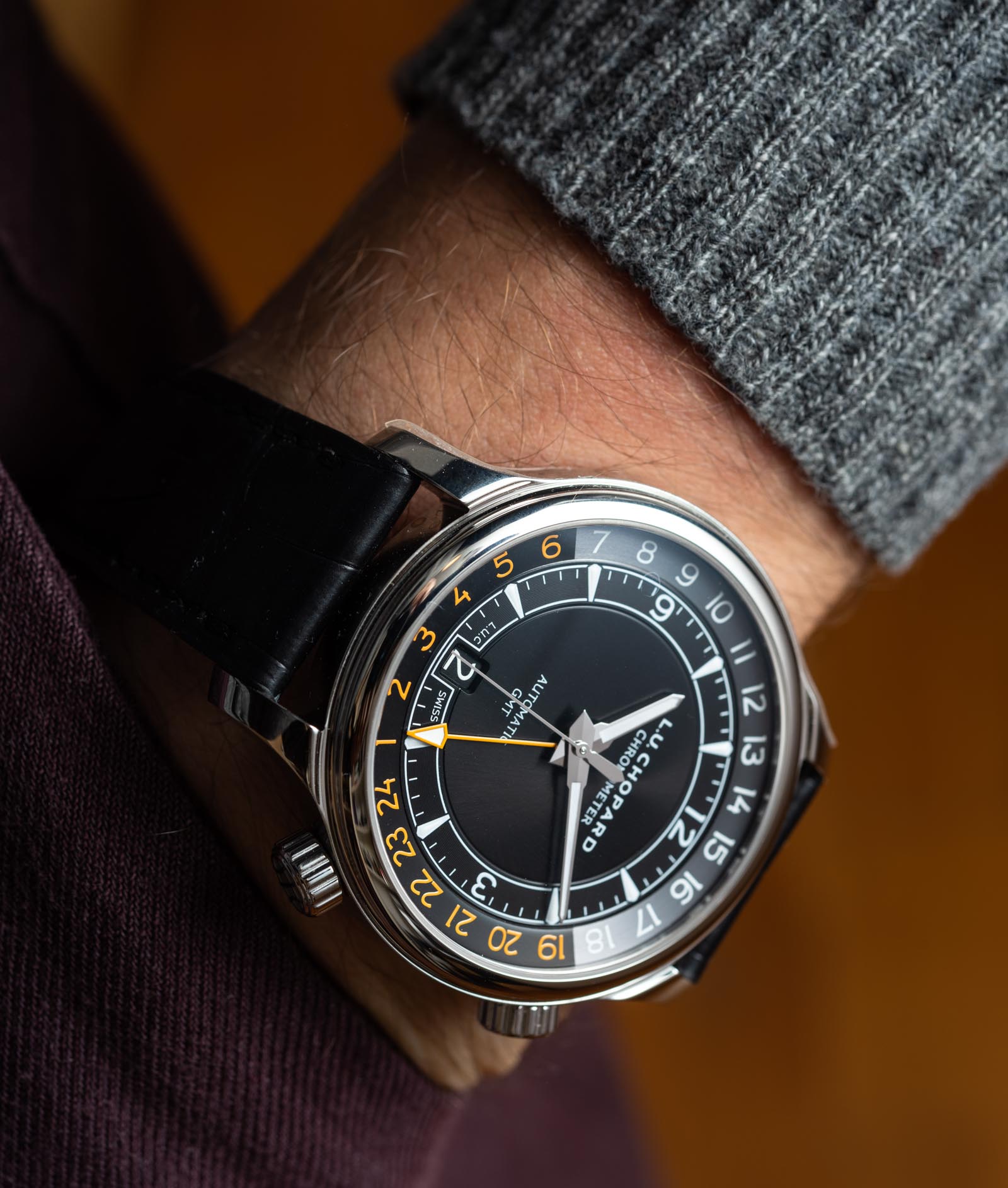 I have said this before, and I’ll say it again, because it’s an interesting experiment that I have going on. Years ago, I started checking the daily-wear watch choices of exceptionally intelligent people that I get to meet. Architects, car designers, engineers, surgeons, CEOs, and so on— the percentage with an illegible watch is in the low single-digits. Some people knowingly, others instinctively steer away from watches with poor legibility, and that pattern is exceptionally pronounced among said individuals. Bright, visible hands in high contrast with a dial, surrounded by clearly marked indices, has been the must for nigh-on every single person in this group I’ve met in recent years. If you’re so inclined, I invite you to join this fun experiment. 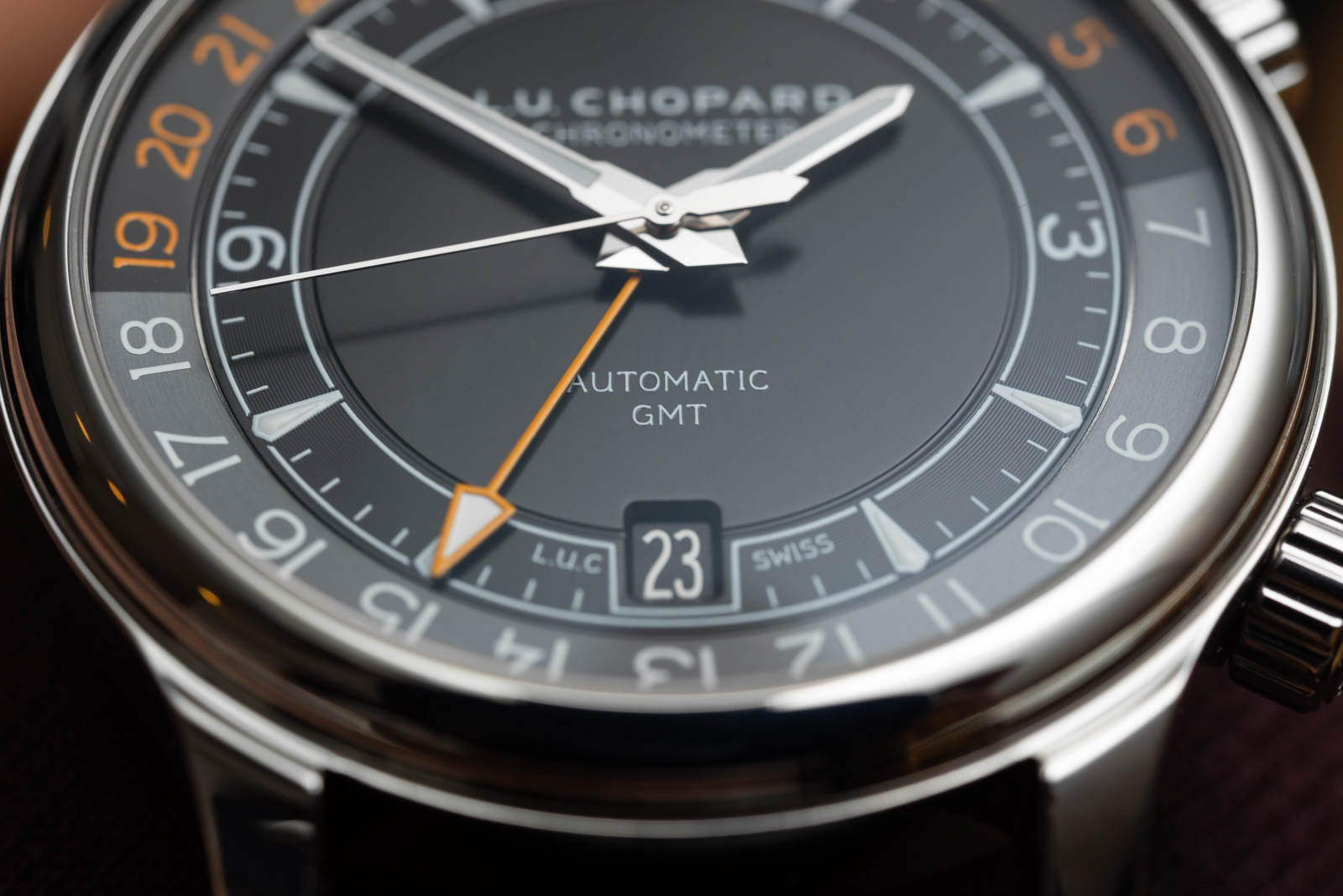 The GMT One applies that focus on real-world utility and legibility not only on its main indication, but also on that of the second time zone. The Arabic numerals on the flange ring reserved for the 24-hour display are almost exactly as large as those on the main dial. The orange GMT hand stretches across the wide dial in an almost dizzying way; it’s just cool to see this orange strip reaching so long and ending in an orange framed, white lume-filled triangle. 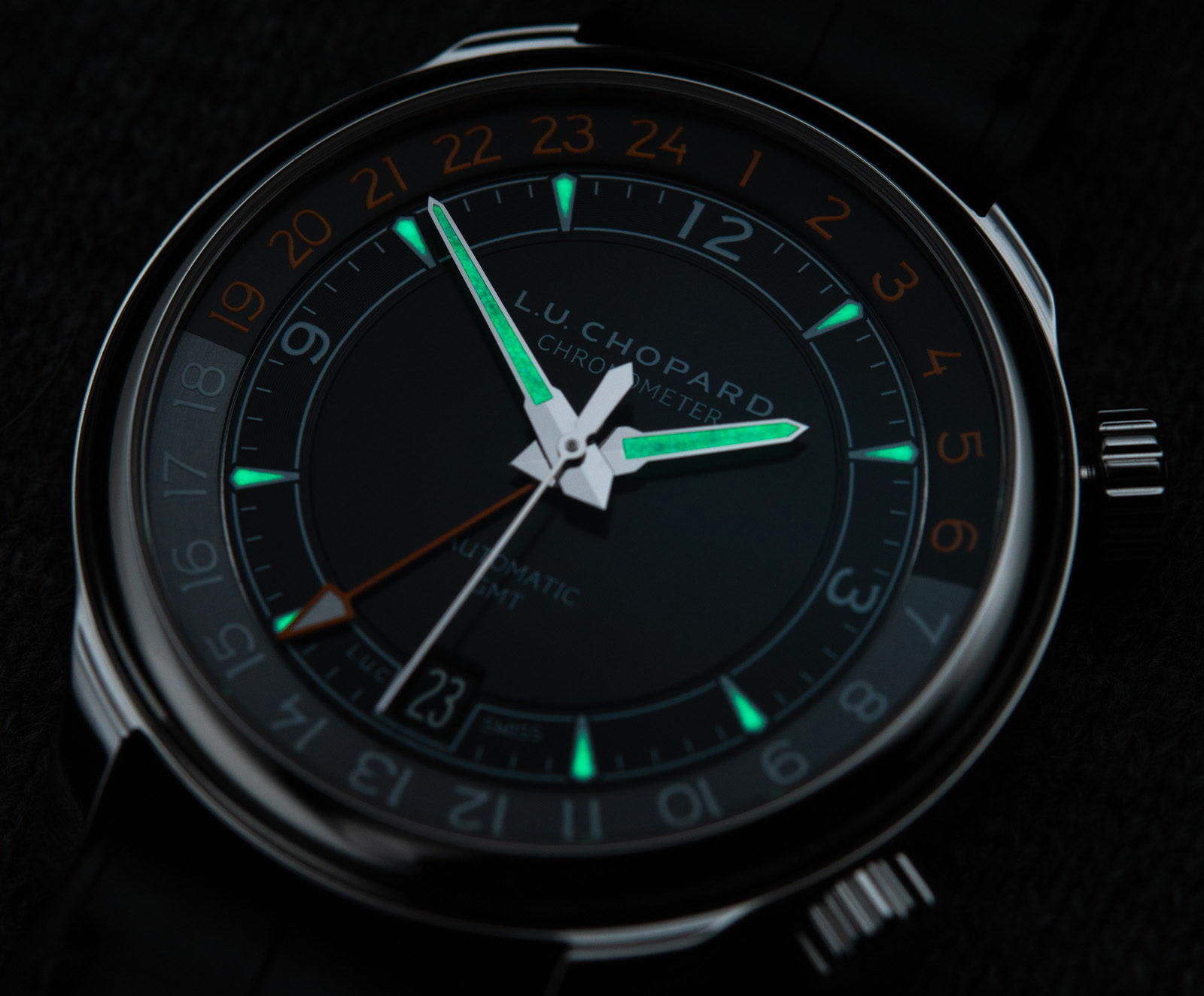 Speaking of which, the only shortcoming I could find in the GMT One is its lume. It isn’t as bright, nor as consistent in its texture as it could reasonably be expected at this price point. Chopard specifies this as Super-LumiNova, the type of luminescent material most commonly used on quality watches and the color does line up with C3 Super-LumiNova. It is not applied as evenly as it should have been. Segments where the paint is a few fractions of a millimeter thinner will show up as darker areas. This could very well be just a one-off thing, and it certainly isn’t a deal-breaker, but hey, it’s there. 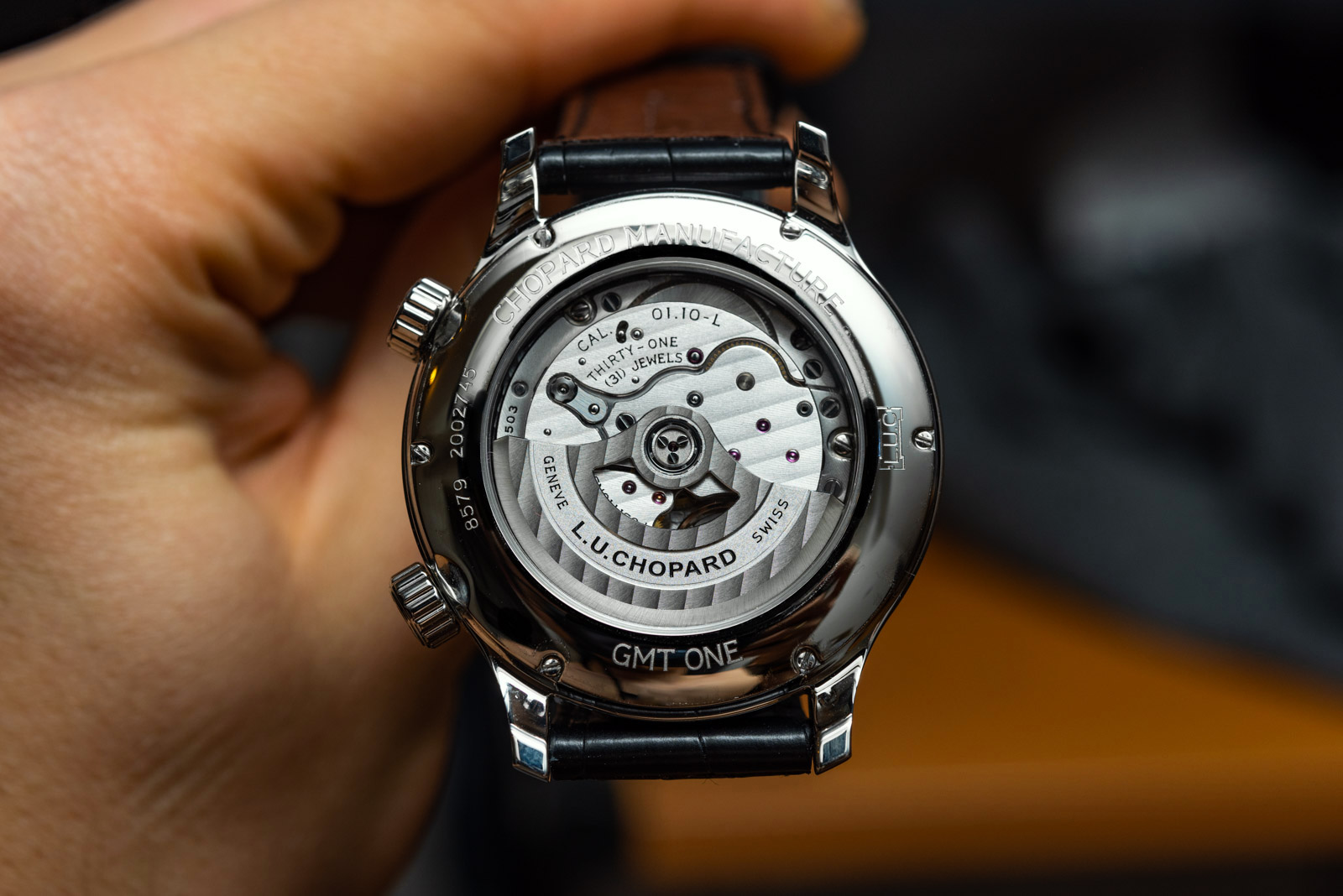 Movement Of The Chopard L.U.C GMT One

The Chopard L.U.C GMT One is powered by the L.U.C 01.10-L in-house movement. This self-winding caliber matches its 4 Hertz operating frequency to an extended, weekend-lasting 60-hour power reserve that is most definitely a welcome feature. L.U.C is also an avenue for Chopard to flex its watchmaking muscles — even at this competitive price point. A bridge proudly boasts about the L.U.C 01.10-L having been adjusted to heat, cold, isochronism, and five positions: that’s some old-school, high-quality watch movement charm right there. With that training at Chopard’s watchmaker benches, it’s no surprise that all L.U.C 01.10-L that end up in the GMT One is a COSC-certified chronometer. Unlike Chopard’s first in-house caliber, the micro-rotor-equipped, drop-dead gorgeous 96.01 (that’s also available from $8,470), the GMT One has a full-sized rotor. 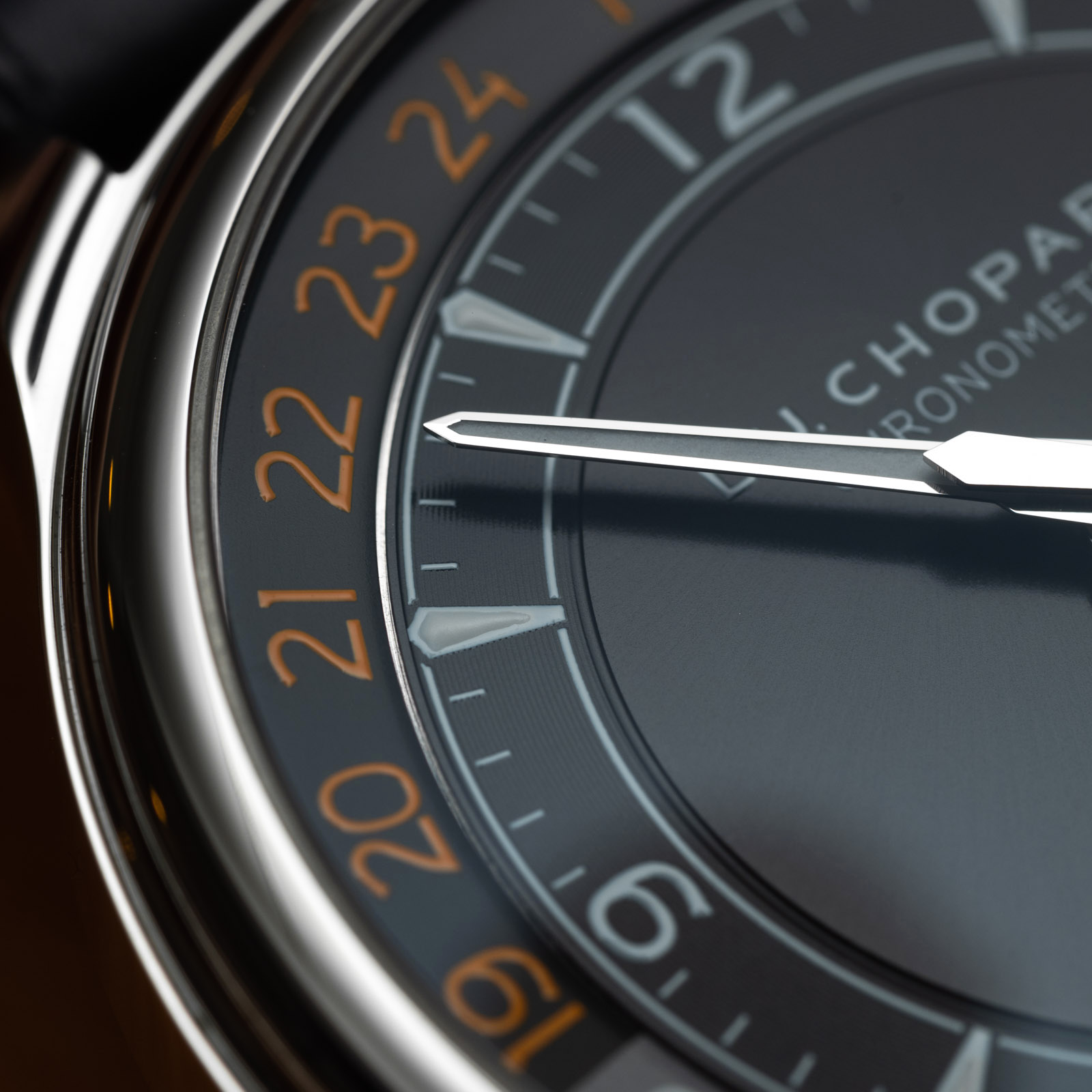 The way the GMT indication works is interesting. The GMT hand is inseparably linked to the hour hand. Pull the crown out to its first position to quick-set the date, and to the second position to set the main hours and minutes. As you do the latter, the GMT hand rotates along with the main hands. So, how do you set the “GMT” to the correct time zone? By pulling the second crown at 4 o’clock to its first position and using it to advance the 24-hour flange ring around the dial. The crown takes quite a bit of turning to advance the ring and it works in only one direction. Once the GMT hand lines up with the correct time, you’re all set. 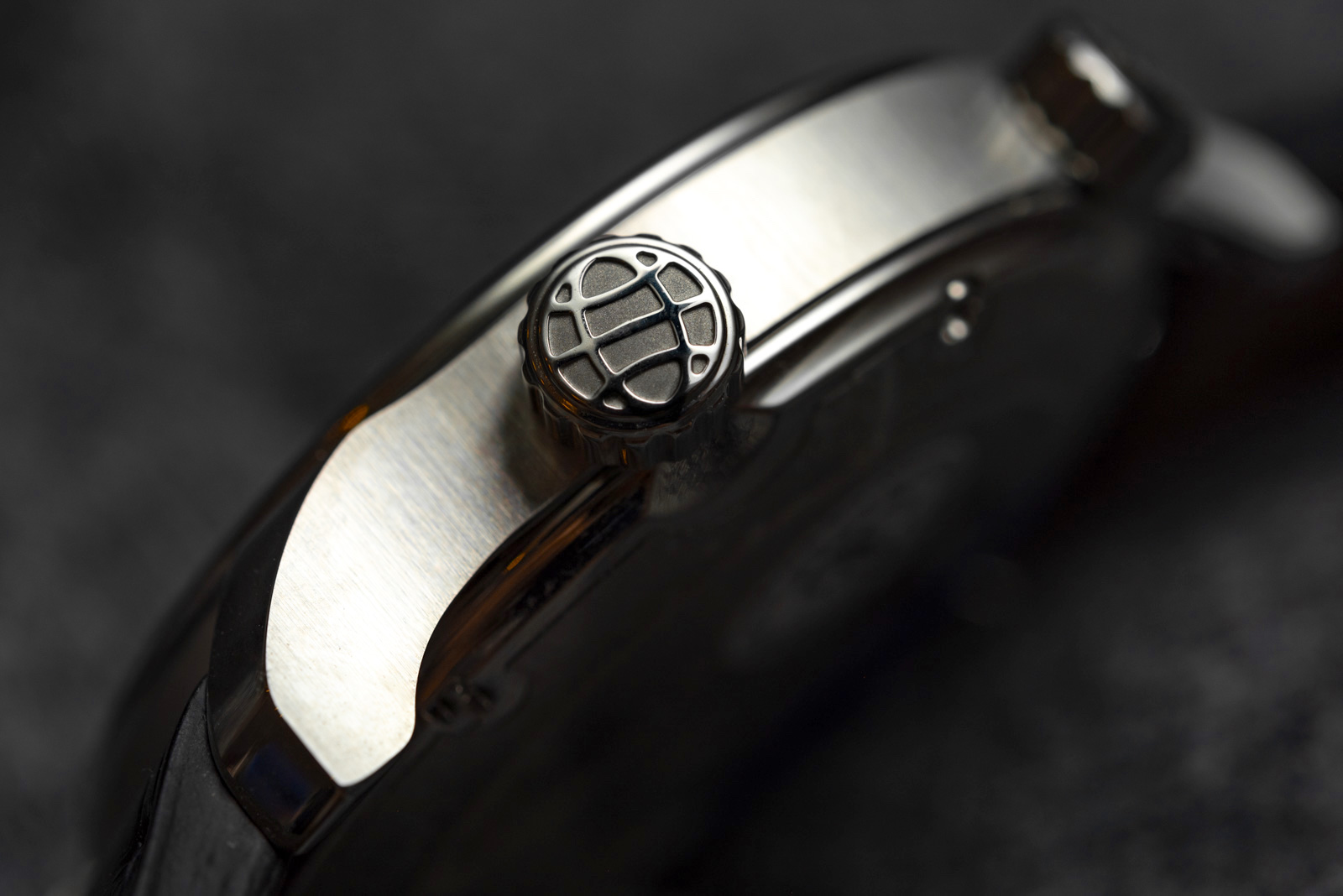 The movement does not rotate this ring at all, which means most likely you’ll have a skewed front on the GMT One, with the brighter-darker divide between AM and PM on the flange ring being offset from the horizontal or vertical plane of the watch. When setting the watch and finding this out, I thought this was going to be annoying — but it isn’t. Given that the hands are not a perfect 10:08 at all times, this offset is just part of the watch performing one of its core functionalities and so it never once bothered me when actually wearing the watch. 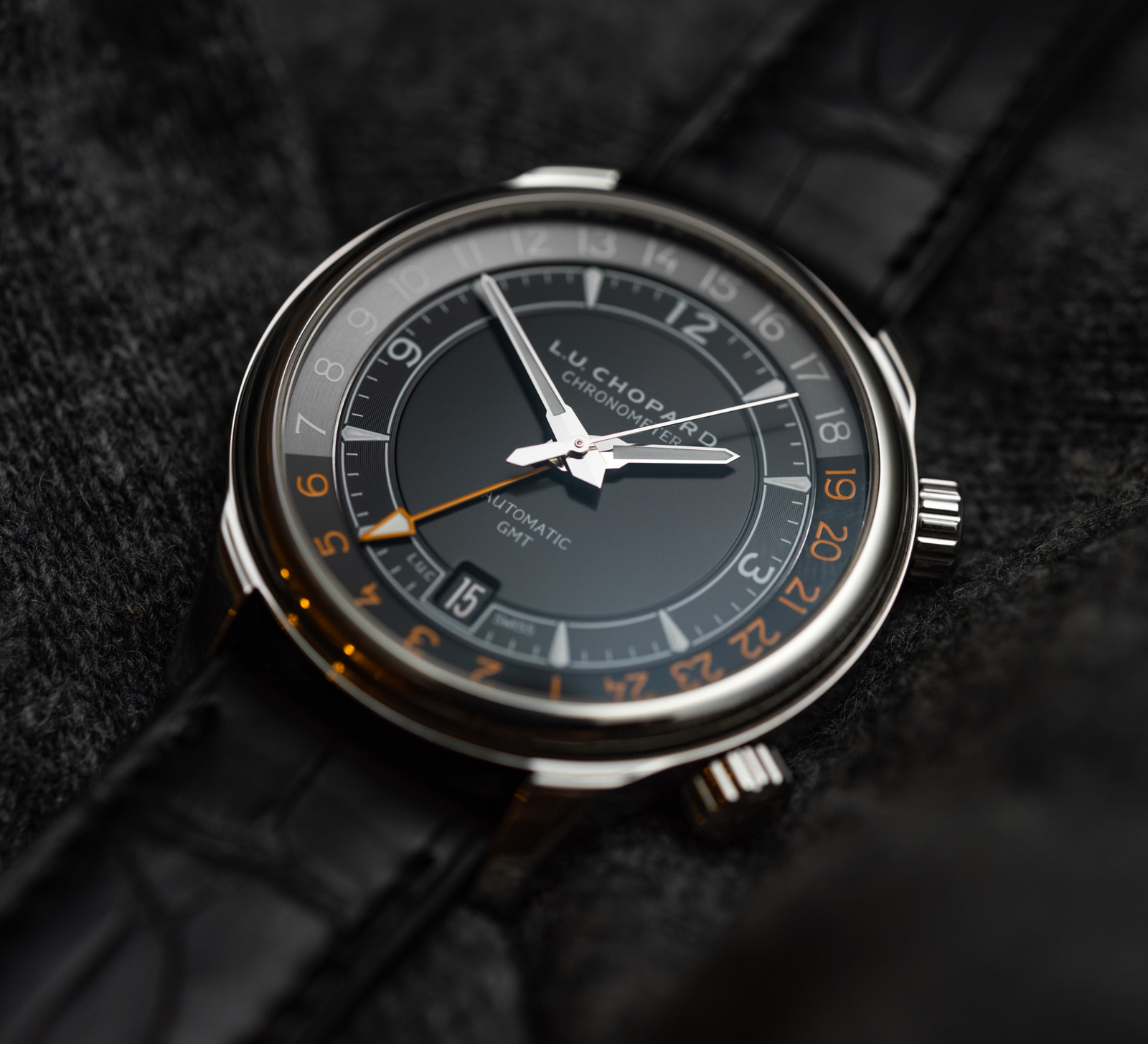 At a hair over the $10k mark, the Chopard L.U.C GMT One is an expensive, but also expensively made, alternative currently on tap to quench that GMT thirst. The beautifully polished case with its trademark L.U.C lugs, the satin-brushed sunburst dial, the Chrysler Building hands (lume notwithstanding), and the all-capable, properly in-house movement make this a truly luxurious watch inside and out. Parts where large-group watch brands love to cut costs, namely the strap and buckle, are both the sort of look and feel worthy of a five-figure watch. The GMT One is a feel-good watch, comparable to a hefty, nicely woven sweater or a tailored tweed jacket — compared to something from, say, Hugo Boss. 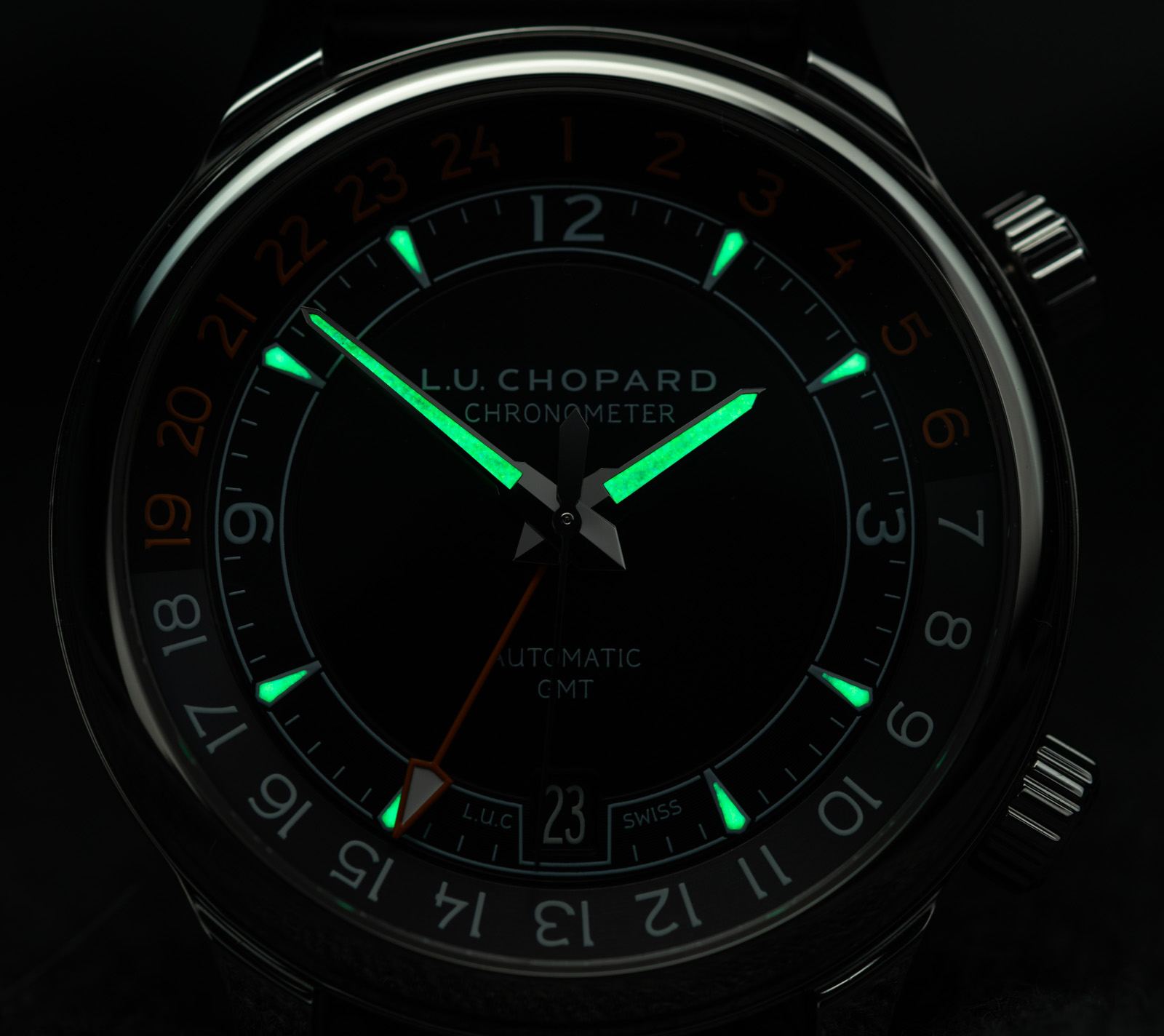 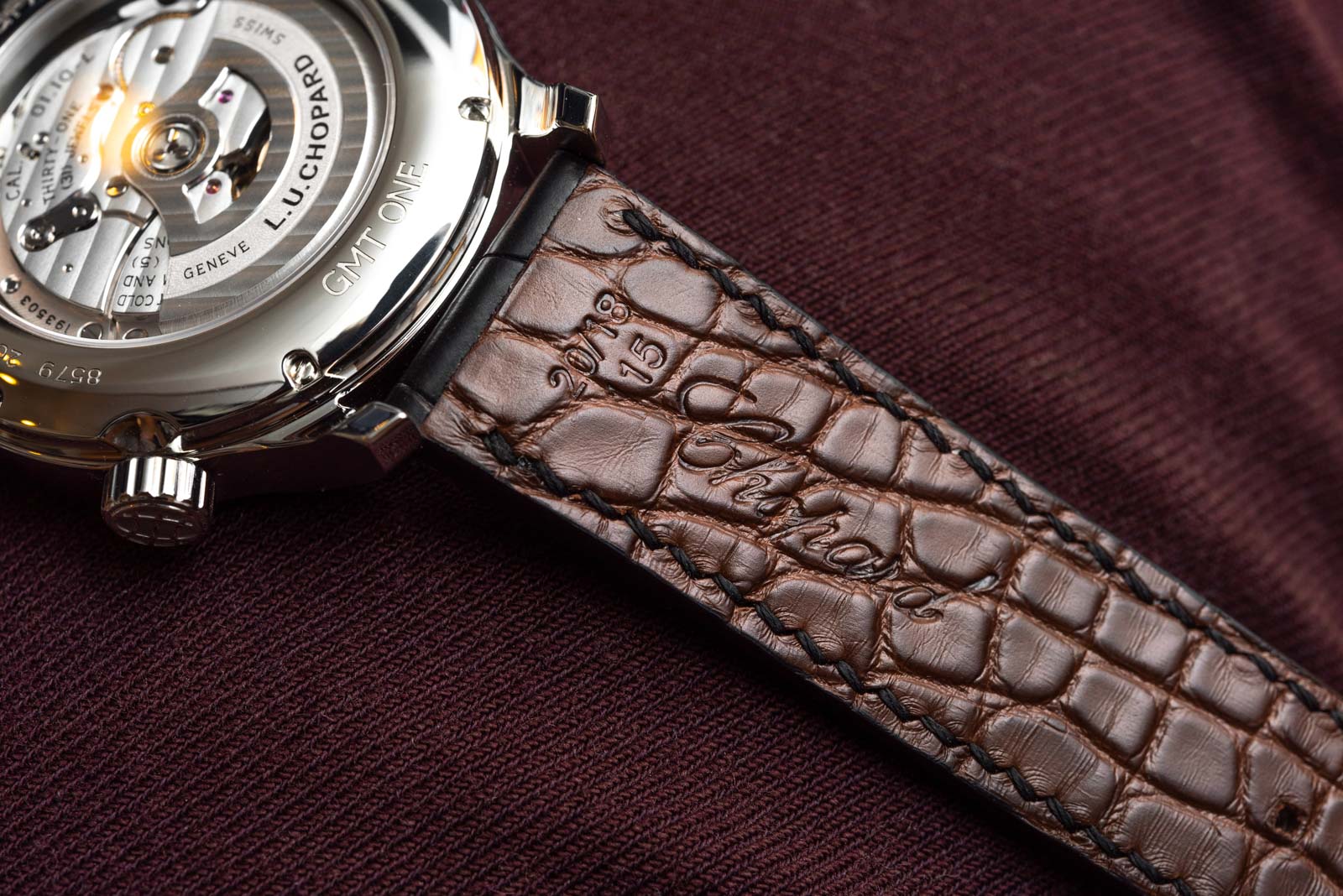 No L.U.C will say to your peers that you know how to rig the system (i.e., get ahead on a biblical waiting list). But it will say that you have good taste, an eye for quality and the willingness to make up your own mind. I’m not saying that’s only possible with an L.U.C — but it’s one of the best damn tools if that’s what you want to say about yourself. 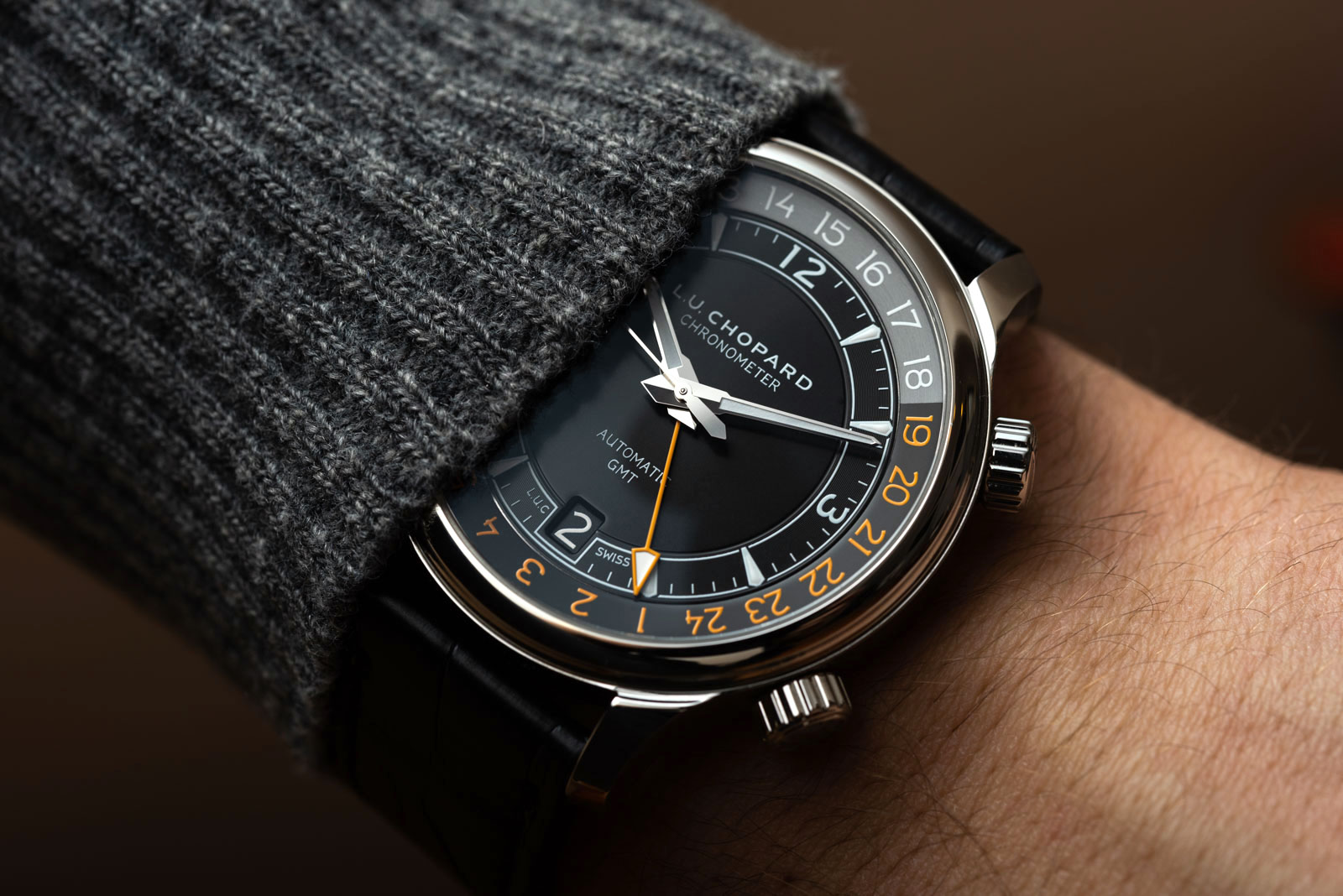 L.U.C has, for decades, been a watch-lover’s watch — and although I’m not saying that Rolex isn’t, wearing this will certainly set you apart. Which, funnily enough, is probably why you thought you needed the Rolex in the first place. It’s not that hard to be smitten by the decidedly masculine, yet distinctly non-over-compensating appeal of L.U.C. I’d have no trouble recommending the L.U.C GMT One to anyone with a need for a proper watch from a proper manufacture, with a GMT function around the $10k mark. I do wish it came with more color options and maybe even a guilloché-centered dial.

Necessary Data
>Brand: Chopard
>Model: L.U.C GMT One reference 168579-3001
>Price: $10,200
>Size: 42mm-wide, 12mm-thick, 20mm lug-to-lug
>When reviewer would personally wear it: Daily. Though I’d probably get a 40mm, cheaper, time-only L.U.C for that.
>Friend we’d recommend it to first: Mature taste, quality oriented, wants to impress himself first, others second.
>Best characteristic of watch: Exudes confidence and elegance, like basically all L.U.C does. Very well made.
>Worst characteristic of watch: Patchy glow to the lume is the only thing I could find.