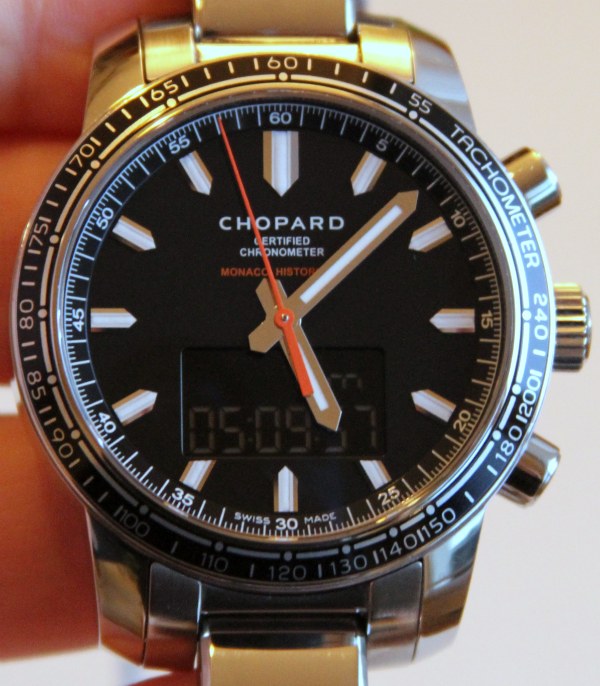 I love this watch, but not everyone will. Some people might not get it – but the beauty is crystal clear to me. This watch was announced last year and was a curious release for Chopard. Part of the larger Mille Miglia collection, this watch combines Chopard sexiness with Superquartz geekiness – something that is really hard to find.

This Chopard Monaco Historique Time Attack MF watch is one of two timepieces made for the car race in Monaco that is officially named the Grand Prix de Monaco Historique. The other one is an automatic model with a 7750 called the Monaco Historique Chronograph (of which there is a picture here). Each share the slick black, orange, and polished steel color scheme, but the Time Attack MF is a much more unique model (even though the mechanical chronograph is a nice model as well). These watches aren’t limited edition models per se, but aren’t the types to be produced for very long.

What really drew me to the watch was the fact that it had a super reliable and accurate high-end thermocompensated (also known as “thermoline”) ETA quartz movement, but didn’t look like a tool watch. These are the same movements that Breitling (and a few other brands) use in their COSC Chronometer certified quartz watches. Getting a Chronometer certification for a quartz movement isn’t at all the same as for a mechanical movement. While your standard drug store quartz watch will be accurate to within about 15 seconds a month, a Superquartz will be accurate to within about 10 seconds a year. They are also a lot more expensive and better made that standard quartz movements. The “MF” part of the watch name stands for multi-function. The movement does more than tell the time, but has your standard bevy of multi-function quartz features such as a chronograph, 2 alarms, calendar, UTC (GMT) time, and second timezone… among a few other features including being back-lit. This is all done via a small negative LCD display on the dial. If you like, you can “blank” out the LCD screen to make it look as though it is not there. 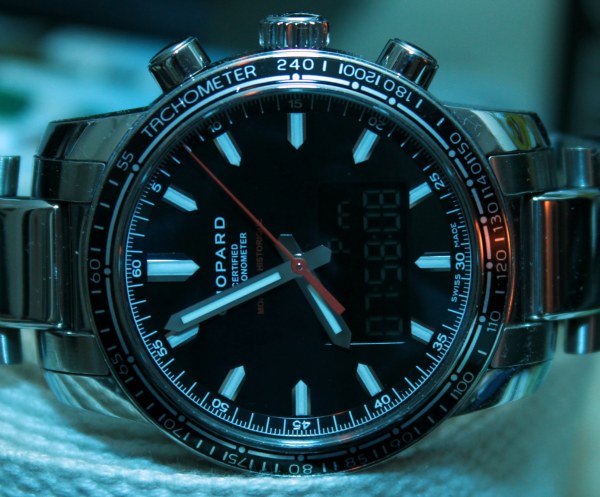 Herein comes part of the polarizing qualities of the watch. Some people think that it is either a shame the watch is quartz at all, or that Chopard should have removed the LCD screen and have the watch just tell the time. Other people (like me) welcome the additional features to an otherwise classy watch and appreciate the high-end quartz movement and accuracy. This is like a stealth nerd watch –  because sometimes I don’t want everyone knowing I am a nerd. It is also a good daily watch for people who want a timepiece they only need to worry about when changing the battery each few years.

My history of loving watches started out with timepieces made by an old friend named Casio. As a kid I would get all excited by watches with as many features crammed in as possible. Analog pieces that just told the time bored me. I wanted my watches complex and useful. But they were plastic, and for an adult, pulling them off while trying to look presentable is hard. So most of the time you are stuck with an ugly though useful watch, or a pretty but boring watch. Yes, this is an over-simplification, but you get the concept I am trying to suggest. For me, Chopard was able to combine the best of both worlds in the Time Attack MF, being able to satisfy picky people such as myself. Though seriously, I don’t get the “Time Attack” part. Does the watch have some secret weapon in it that I haven’t discovered yet? 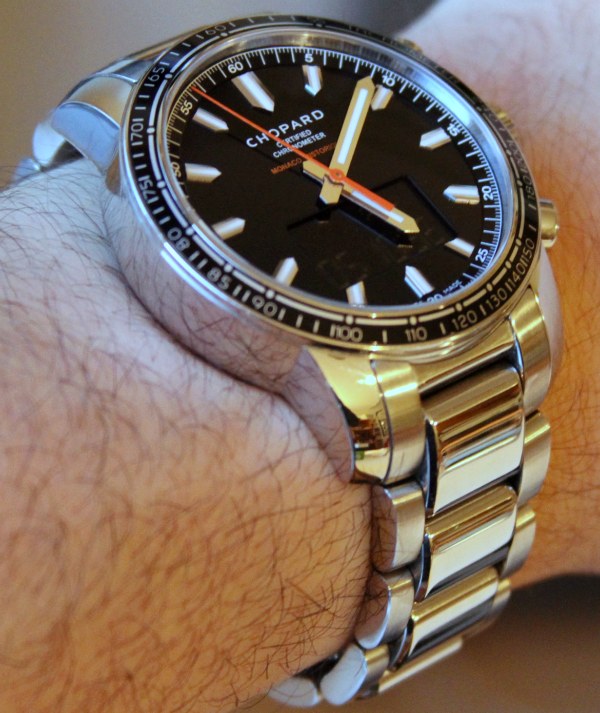 Quality is great. Say all you want about Chopard, but they make a good looking, well put together watch. The Monaco Historique Time Attack MF is in a really well polished steel case that is 42.5mm wide and 14.5mm thick (ideal size for the case and design). It has a perfectly domed AR coated sapphire crystal, and that nicely engraved caseback. All I would improve is the 50 meters of water resistance. There is another steering wheel engraving on the crown, and the pushers feel good to the touch. Very few areas on the case are really sharp, but it doesn’t look rounded either. For me the watch is perfectly comfortable with its elegantly curved lugs and beautiful bracelet. The watch came on a port-holed leather strap or this great looking metal bracelet.

The steel links are chunky and feel great. The center link is polished while the outer links are sort of brushed. Basically the whole watch is polished, but to add visual interest, Chopard gave certain areas of the watch a more intense level of polish –  if that makes sense. The only problem with the bracelet is sizing. You don’t have a lot of micro-adjustment options. It happens to fit well on me, but you could find it is either a bit too small or too large (that is where a strap comes in handy). The bracelet has a more or less hidden clasp to look flush and clean on the bottom. 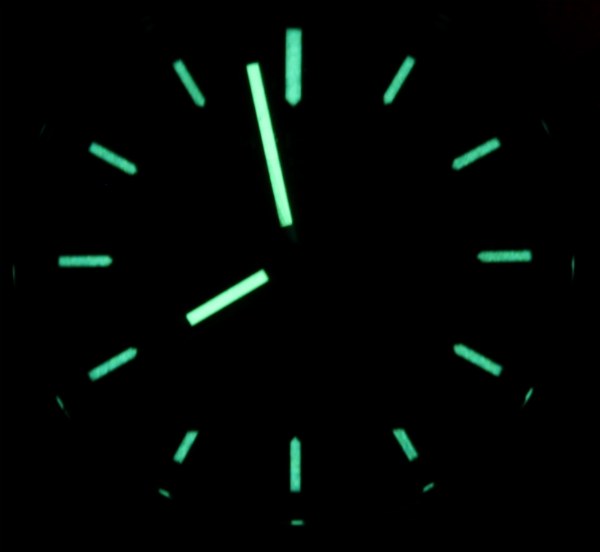 For me the best part of the design is the dial. The bezel has a tachometer that looks cool, but I will never use it. The dial is a deep semi-glossy black with large applied polished steel hour indicators. For dial orientation, the 12 o’clock marker is a bit larger than the rest of them. The watch hands are large and perfectly sized. They also match the design of the hour markers which is nice. There is an extremely good level of contrast on the dial making it very easy to read, and the hand and hour markers are generously coated with SuperLumiNova. Along with the “Monaco Historique” text on the dial, the large seconds hand is in orange and adds just the right amount of sporty color to the dial. Chopard Pretty much covered all the bases with the design.

To switch to the various modes in the LCD screen you spin the crown. Not just casually, but you need to give it a little jerky spin in order to have it switch modes. This is done in order to prevent you from accidentally switching screens. Once you learn the basics of how to operate the functions it is pretty easy, but I recommend studying the manual a bit. It is overall a pretty user friendly experience. To activate the backlight, you just press in the crown. 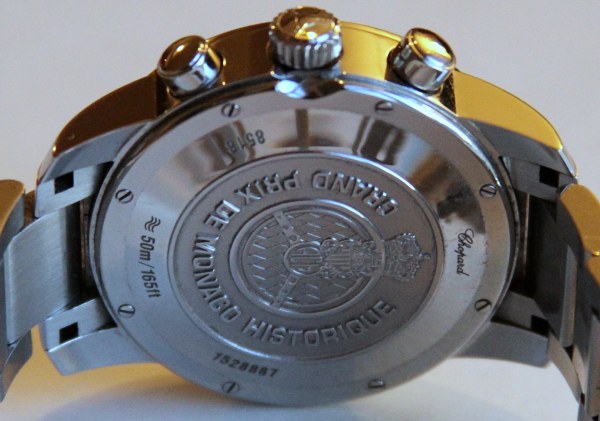 I will repeat once again that I truly love this watch. It makes for a great daily wear and I pick it up a lot when I am in a rush because I know that I don’t need to adjust the time, and can leave it around without putting it in a winder as I do with automatics. Plus, the Monaco Historique Time Attack MF is a gorgeous looking watch that fits with just about anything.  I wouldn’t mind having it as my only watch if I needed to pick one. No, I have not abandoned my love for mechanical watches, but if there is an argument to made for quartz, it is a Superquartz. If you get one of these and someone gives you crap for having a ticking seconds hand, just sit them down and explain the merits of Superquartz and that the advanced thermocompensated quartz movement in your watch actually costs more than the mechanical movement in their watch if they have a relatively common Swiss ETA automatic movement in theirs. Prices for the Chopard Monaco Historique Time Attack MF watch ranged from about $3,800 – $5,000 when they were released and can probably be found in a few places still.

Last, I predict that this watch will be a future collector’s item. The reason being is that most people who shop for a men’s Chopard watch, or any watch in the $5,000 range want a mechanical watch. Few people seeing this watch in a store probably understood the movement, and thus it was probably not a sales success. However, as I explained, it has a great look to it and a lot of merits – which will probably attract collectors in the future because they will likely be rare but desirable.