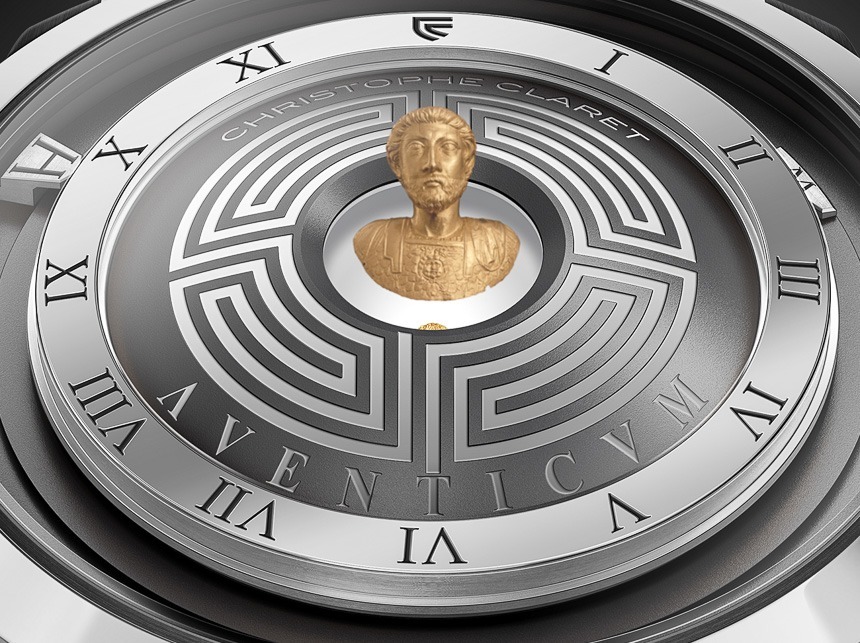 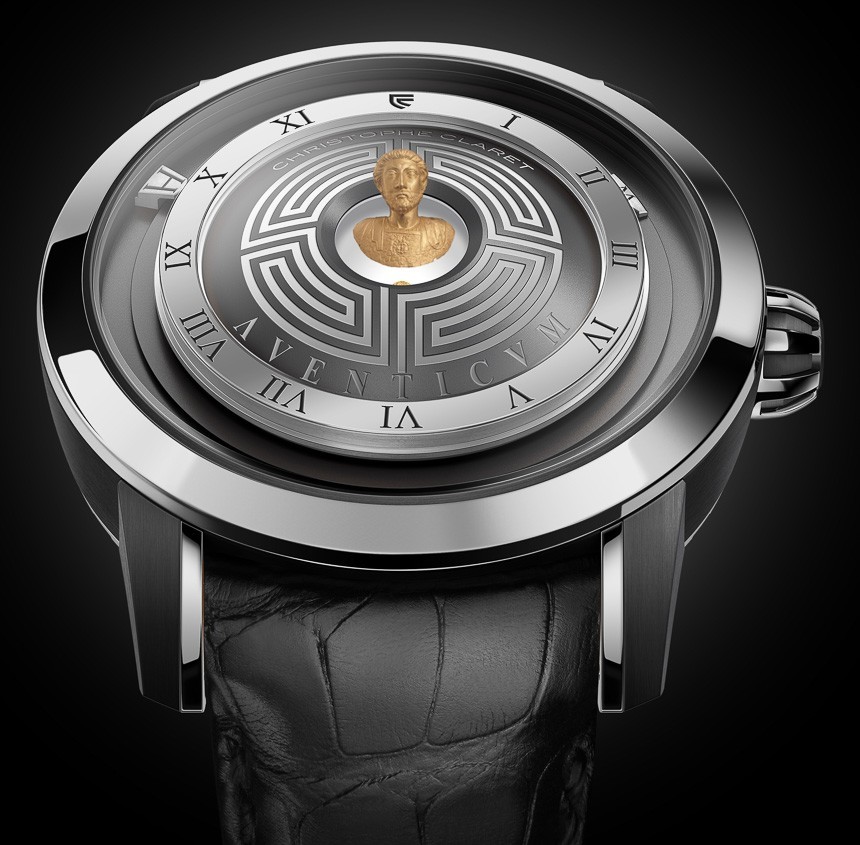 For 2015, the newest watch from Swiss watch maker Christophe Claret is the Aventicum, and it celebrates ancient Rome. I’ve said more than one time that the culture and architecture of ancient Rome (just like art deco) doesn’t get represented in watches enough. Well, Romanophiles rejoice, because Mr. Claret has you in mind, and this is actually among his least expensive timepieces.

It took me a little while of reading about the Christophe Claret Aventicum to really understand it. Christophe Claret is a master of the complicated and recently released the Blackjack 21 and Poker watches… which do just what it sounds like – they allow the wearer to mechanically play a game of blackjack or poker on their wrists. So what would a “Roman complication” be? It turns out, Christophe’s idea is an optical illusion known as a mirascope. 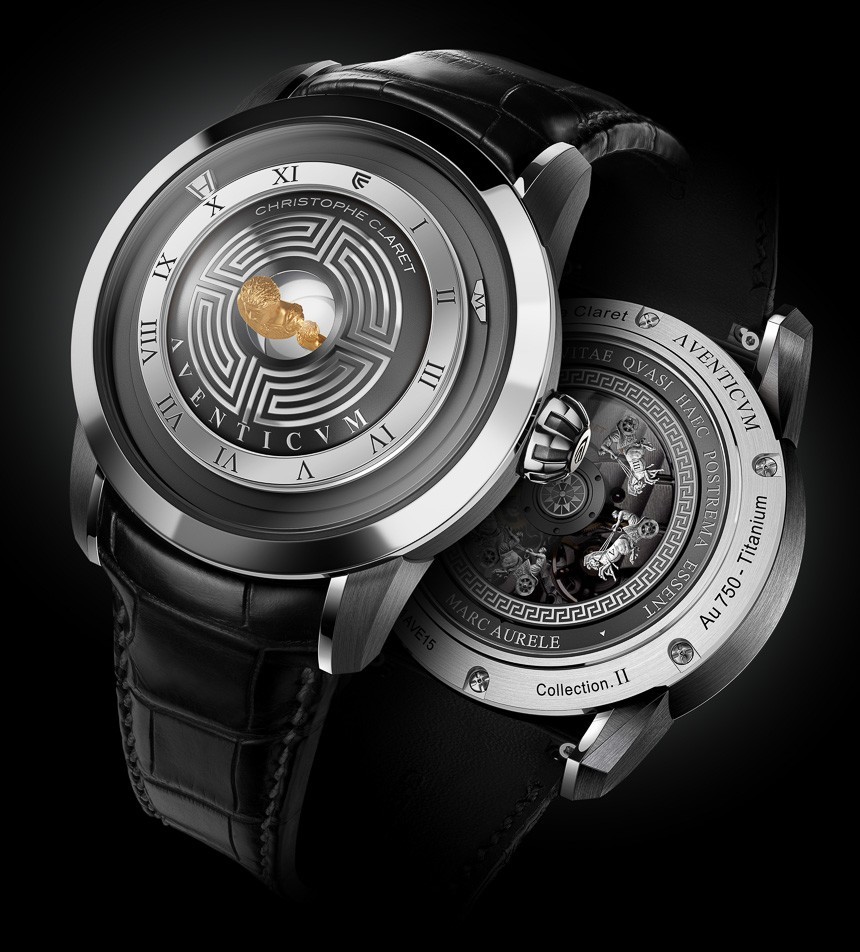 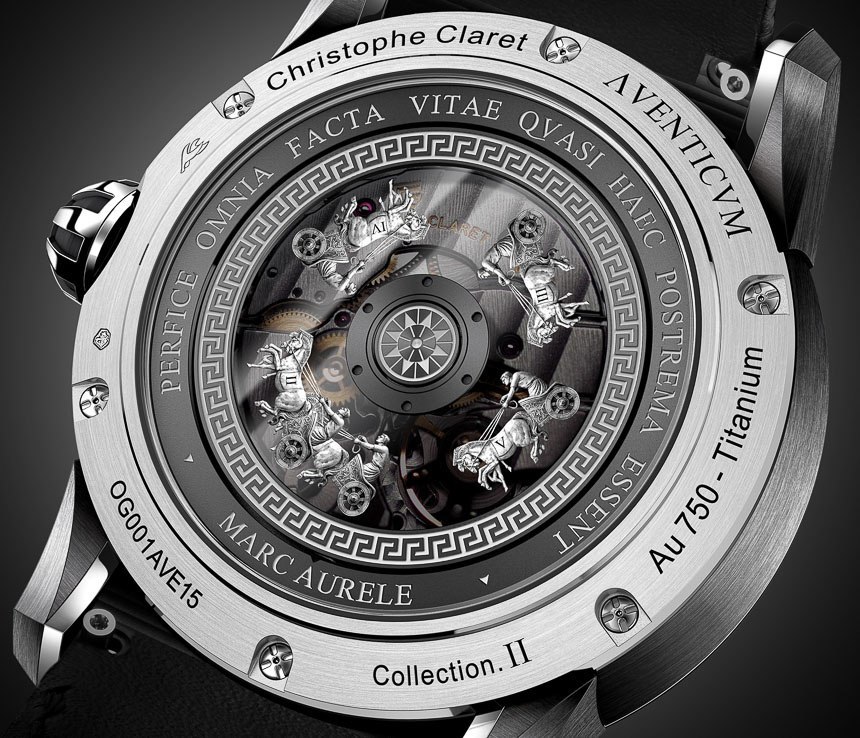 While I didn’t know the term mirascope previously, like many people, I was familiar with what they actually are. In the Christophe Claret Aventicum watch, the mirascope subject is a engraved gold bust of the ancient Roman emperor Marcus Aurelius. It appears to float over the dial as though you can touch it, but in reality, nothing is there. The effect is due to two bowl-shaped mirrors that sit under a top bowl section with an opening. The dual parabolic mirrors face each other. The subject is actually placed right below the opening of the upper mirror. While most mirascopes are fun objects of wonder for children, this is, of course, the first time I’ve heard of one being produced in miniature for a wrist watch.

The sad thing is that just looking at these high-quality images from Christophe Claret doesn’t really do the final product justice – which is something that we will only be able to report on later. Like most optical illusions, taking a picture of the effect of a mirascope might be difficult. Though, if it works well, the Christophe Claret Aventicum watch will always appear to have the floating bust in the center of the dial – which should be cool and novel to say the least. 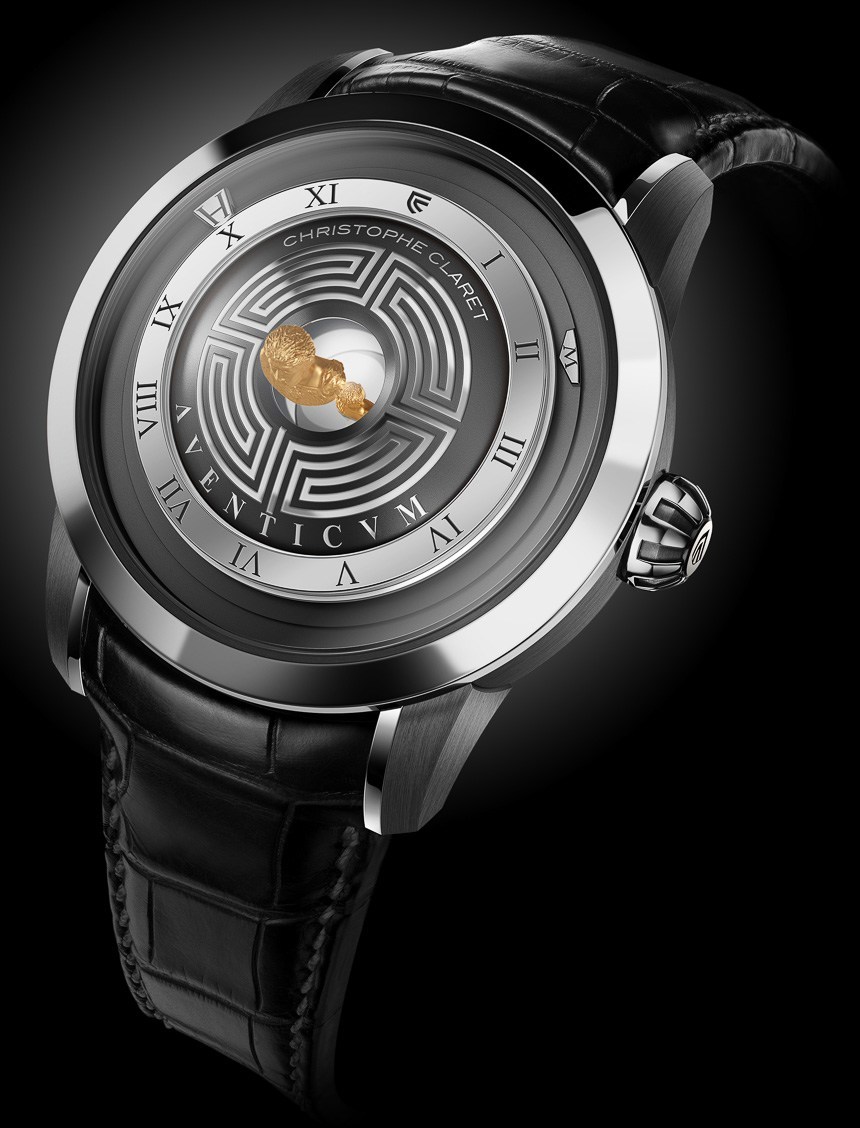 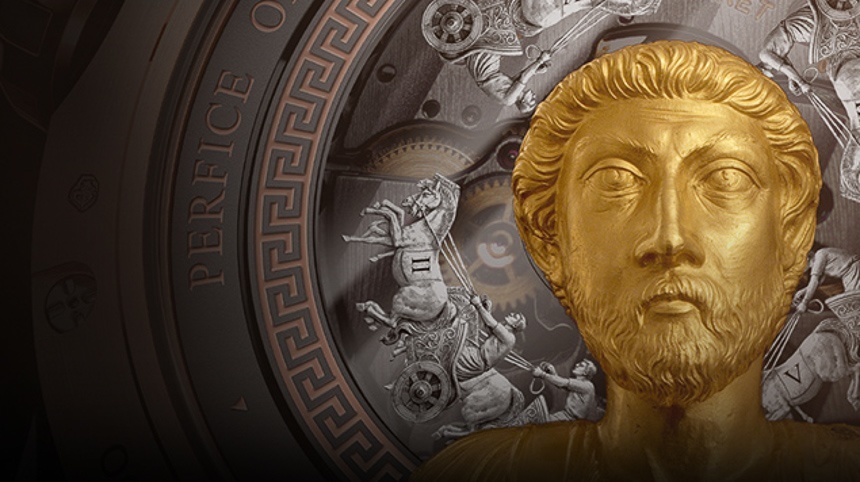 I certainly do sympathize with people looking forward to more mechanical complexity as a treat in a new Christophe Claret timepiece. While I feel that Claret did in fact “deliver” on his regular promise to offer a novelty which is a high-end toy (as he does with all his watches), the Christophe Claret Aventicum lacks much of an horological edge to it. Perhaps the timepiece would have been a bit more “Claret” if it included at least one other interesting complication with the mirascope in the center of the dials.

According to Christophe Claret, it was a distinct challenge to combine both the mirascope device as well as hands to indicate the hours and minutes. As you can see, there are unique traveling indicators around the dial which are labeled “M” for minutes and “H” for hours. The style they are done in makes them appear to be stone blocks, where the letters have been chiseled in. This same style is used all over the watch where “V” is used instead of “U” just like in the Bvlgari brand name. 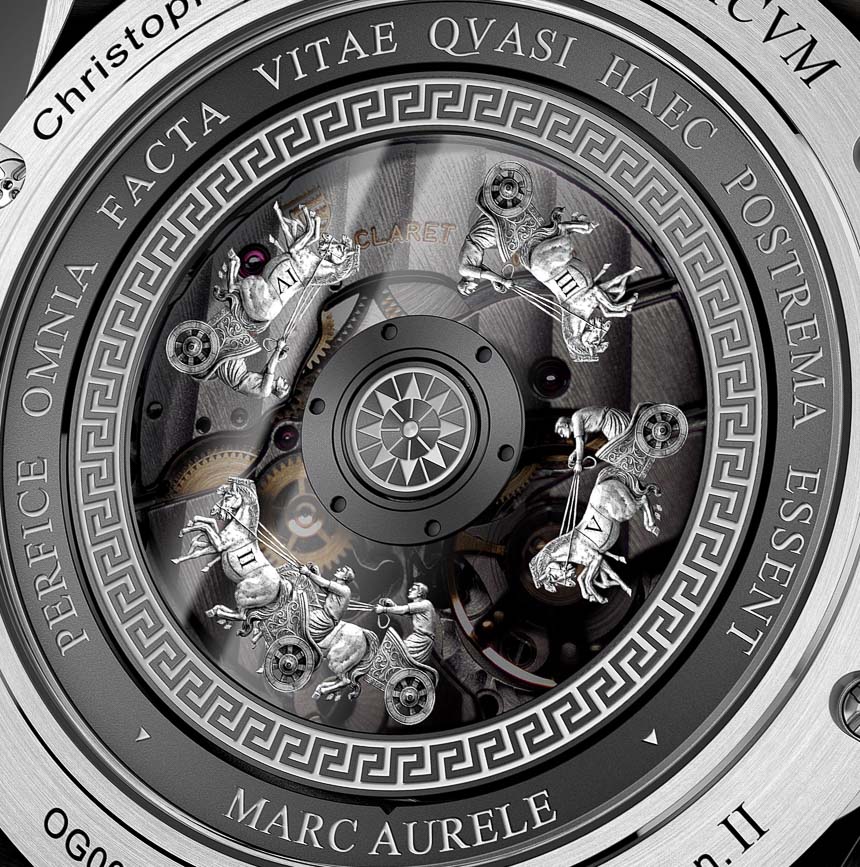 Would it be a Roman-themed wrist watch without using Roman numerals? Not at all. The mutli-layered dial is rather interesting, and there is a sort of “maze motif” which is designed to probably make the “dome” of the mirascope system a bit less obvious. Inside the Christophe Claret Aventicum watch is the in-house made Christophe Claret caliber AVE15 automatic movement. Operating at 4Hz with 72 hours of power reserve, the AVE15 is perhaps one of the most simple Christophe Claret movements I am familiar with, being made up of only 186 parts.

An additional interesting “twist” to the watch being a standard automatic is the “mystery” automatic rotor. It is mostly a piece of sapphire crystal, but with five “metalized” Roman chariots on it that spin around with the rotor. The weighted section of the rotor which causes it to spin is likely hidden from view under the caseback of the watch, outside of the sapphire crystal exhibition window. Given the mirascope in the watch, the case is going to be rather thick at 18.49mm, while it is 44mm wide. It is the standard Christophe Claret style case we have seen for a little while now – though with slightly different proportions. 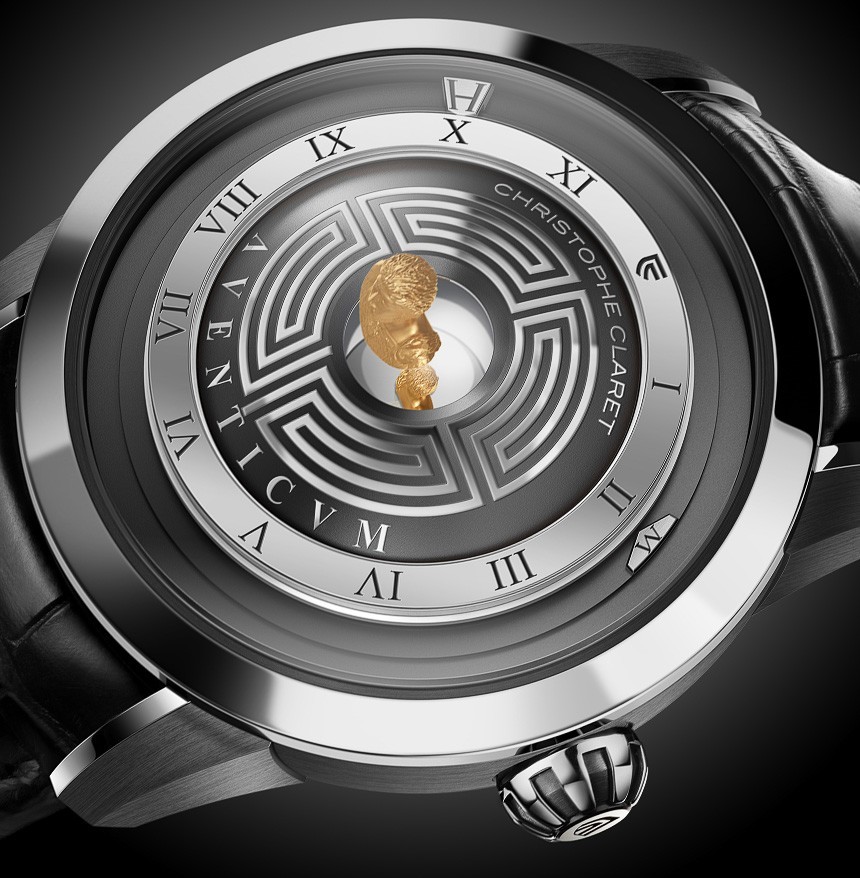 Christophe Claret will produce two limited edition versions of the Christophe Claret Aventicum watch, with one in 18k white gold and one in 18k red gold. Each has some grade 5 titanium parts as well. On the rear of the watch is a further statement in Latin which reads “Perfice omnia facta vitae quasi haec postrema essent.” This translates into “perform every act in life as though it were your last.” I don’t think that applies to timepiece buying, as watches like this were meant to be part of a larger collection and not your only timepiece. While the concept of the Christophe Claret Aventicum is interesting, I am not sure it is going to make sense to many watch lovers eager to see fresh complications from the mind of Mr. Claret who has spoiled us. My feeling is that, in its own way, the Christophe Claret Aventicum will be really impressive, but it will require some hands-on time with the piece for me to discover that in full.