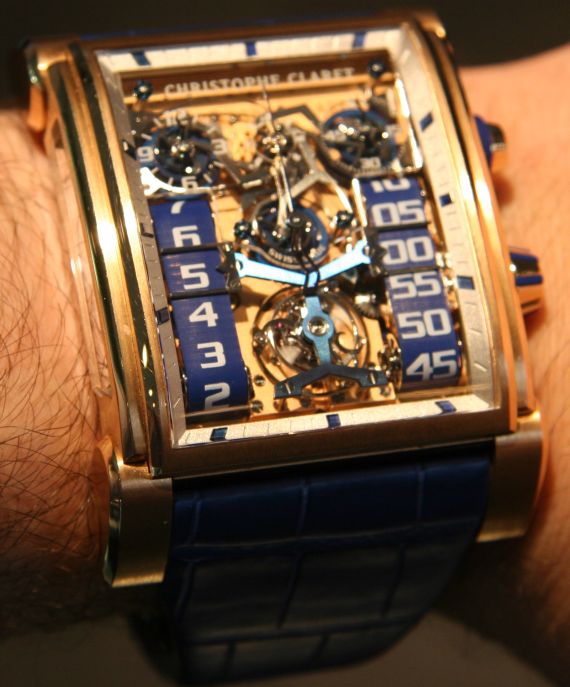 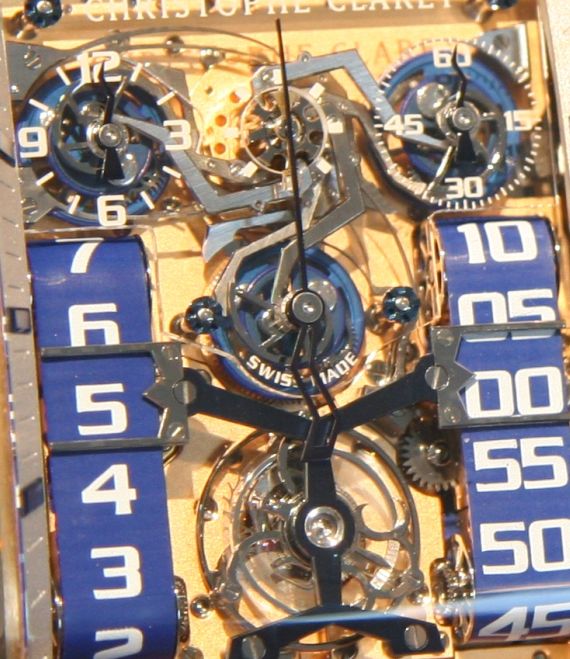 If you aren’t familiar with this watch, it will take a while to explain. Being the first “Christophe Claret” branded watch to come out of the genius’ watch shop, Christophe felt the need to sacrifice nothing when making his half million dollar wonder watch. It needed to epitomize the technological sophistication the Claret shop watch capable of, as well as giving the luxury watch loving world something totally different. The watch shows the time on two rubber belts. Has a monopusher chronograph, a flying tourbillon, and a hammer and gong that chimes each time you press the chronograph pusher. While these are the function, the construction, complexity of the movement, and over all design are “other worldly.” I’ve never see anything like this. Claret is also known for making movement for brands such as Jean Dunand and Maitres du Temps. If you want to have an impressive $100,000 plus watch, Claret is the man to go to.

Check out an article I did about the Christophe Claret Dual Tow watch here on Luxist.com. There you will get the basics. Let me say again that Claret is making the limited edition watch customizable. The website configurator for the watch allows you to choose all sorts of personalized materials and colors. The watch further comes with an alligator and rubber strap. I don’t want this article to be filled with numbers and figures. My other articles or Claret’s website will tell you the little details. I want to share with you what it is like to wear, operate, and look at the Dual Tow watch.

The name comes from the two rubber belts that are constantly moving to show the time (not jumping). The effect is pretty cool and you can read the time through metal windows. I am a bit concerned about the use of rubber (though I am not sure what other type of material would have sufficed). The reason being that rubber with degrade over a short amount of time as it is always moving. I expect the Dual Tow to require servicing each 1-3 years, whereby among other things, the belts will be replaced. The rollers and structures that they are built on are very interesting. Looking into the movement you see an impossible wonderment of tiny details that boggle your mind with logistical questions on how it was all made. The thin sapphire bridge that connects the chronograph dials (and where the dials themselves are printed) is made on some manner of secret machine. One of the reasons you pay about a half million dollars for a watch like this is because no one else in the world can replicate it.

The Dual Tow is a big watch. The gold rectangular square sits over my entire wrist. It would look more odd if it were not curved. The entire case is richly curved, as well as a few of the sapphire crystals on the watch. The sides ones are impressive to gaze through. You can see that the machinery inside the watch is complex, like a little world. A micro mega machine that brings back a child-like sense of disbelief. Though you can’t afford the watch on any adolescent allowance. Claret has a very classic sense of aesthetics when it comes to making movements though he is quite advanced in his execution. My opinion is that the man is heavily influenced by classic pocket watch design. The sort of watch making where a plate is like  a canvas – and the machine is built on top of it. This is very much how the French design watch movements. The Swiss are a bit different incorporating the machine with what is holding it together. I see Claret’s work like a combination between watch making and architecture. He is as concerned with the visual design and symmetry of the watch, as he is with making it work. He doesn’t do the testing that the Germans do, and he does not indulge a sense of efficiency like the Japanese. He is of course an artist, not a bean counter. 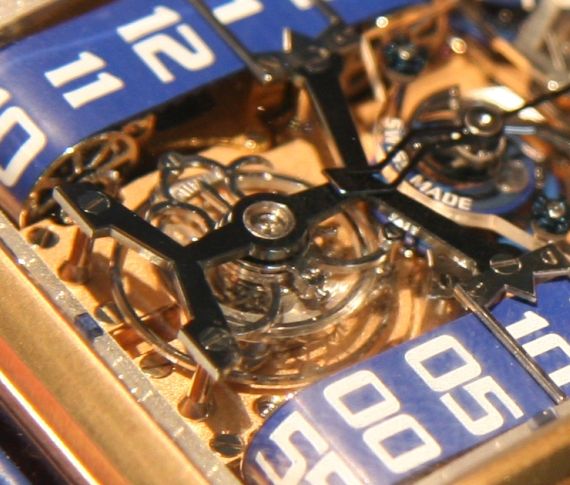 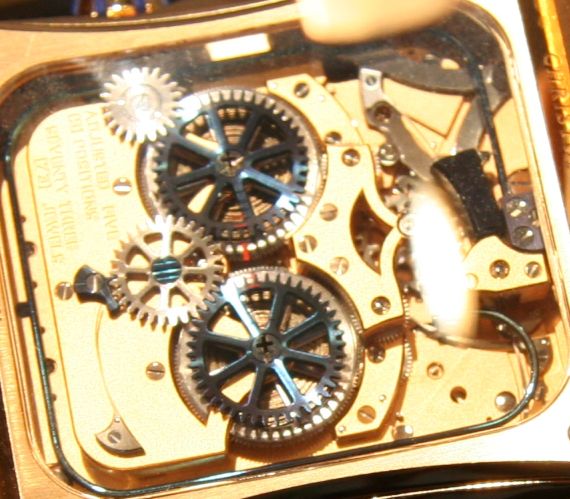 The movement is manually wound with a tourbillon escapement seen at the bottom of the face. As some watches focus on featuring a tourbillon as the most complex feature, the Dual Tow does not. The tourbillon just sort of placidly sits there, minding its own business… being complex and understated. The star of the dial from a technical standpoint is the planetary gear array that controls the chronograph. Like a many armed Indian God, the gear system presses multiple points at once. Claret meant to poke not only your visual interest, but at each press of the pusher, you hear a “chime.” Claret’s most classic talent is in minute repeaters. So the man knows a good gong and hammer show. On the rear of the watch you’ll see a hammer at the top of it with a thin pieces of blue steel like a wire going around the circumference of the movement like it was an internal antenna. That thin piece of steel is the gong, and needs to be relatively rigid and not touching anything else save for the base to make sound necessary to have a deep little chime. This mechanism is one of the other things activated when you press the chronograph pusher. The concept is the same as when you get a beep each time you press a button on your mobile phone.

Attention to detail all over the watch is fantastic. The hour markers around the dial are jewels that match the color theme of the watch. Here they are sapphires. The movement decoration, finishing and detail of the case, everything is amazing. Another example is that the strap ends where the butterfly deployment attached has a spring mechanism that gives about 1-2mm of pull. Why? Just to make sure the watch strap stays comfy if your wrist expands when you clench your first. Just like stretchy pants.

If you can afford one of these watches, I highly recommend it. Very cool, very unique, and very exclusive. Just what Claret was going for. He made the Dual Tow for his company’s 20th anniversary, I hope he keeps this type of work up. Check out the images, videos, etc… for more.