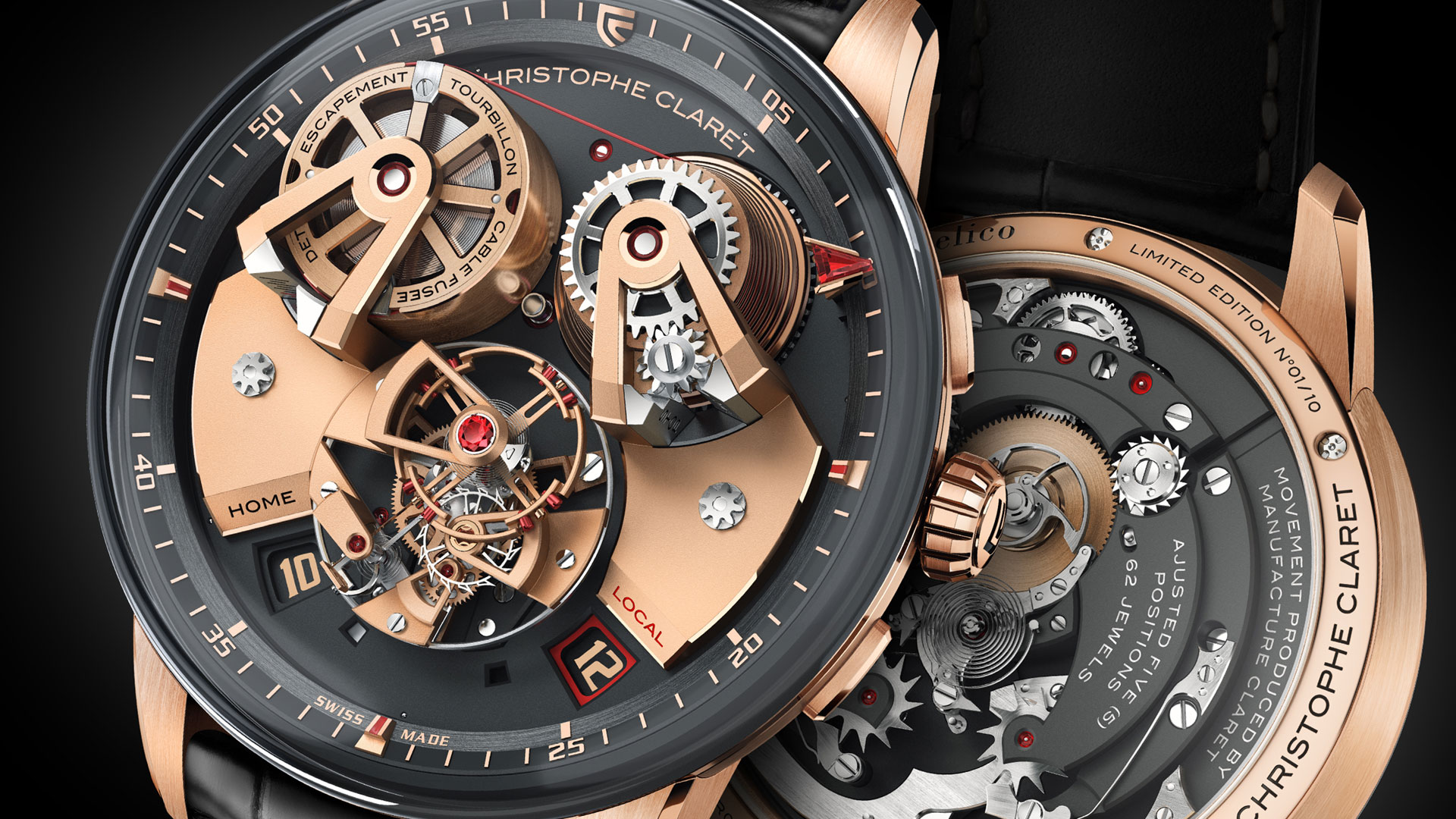 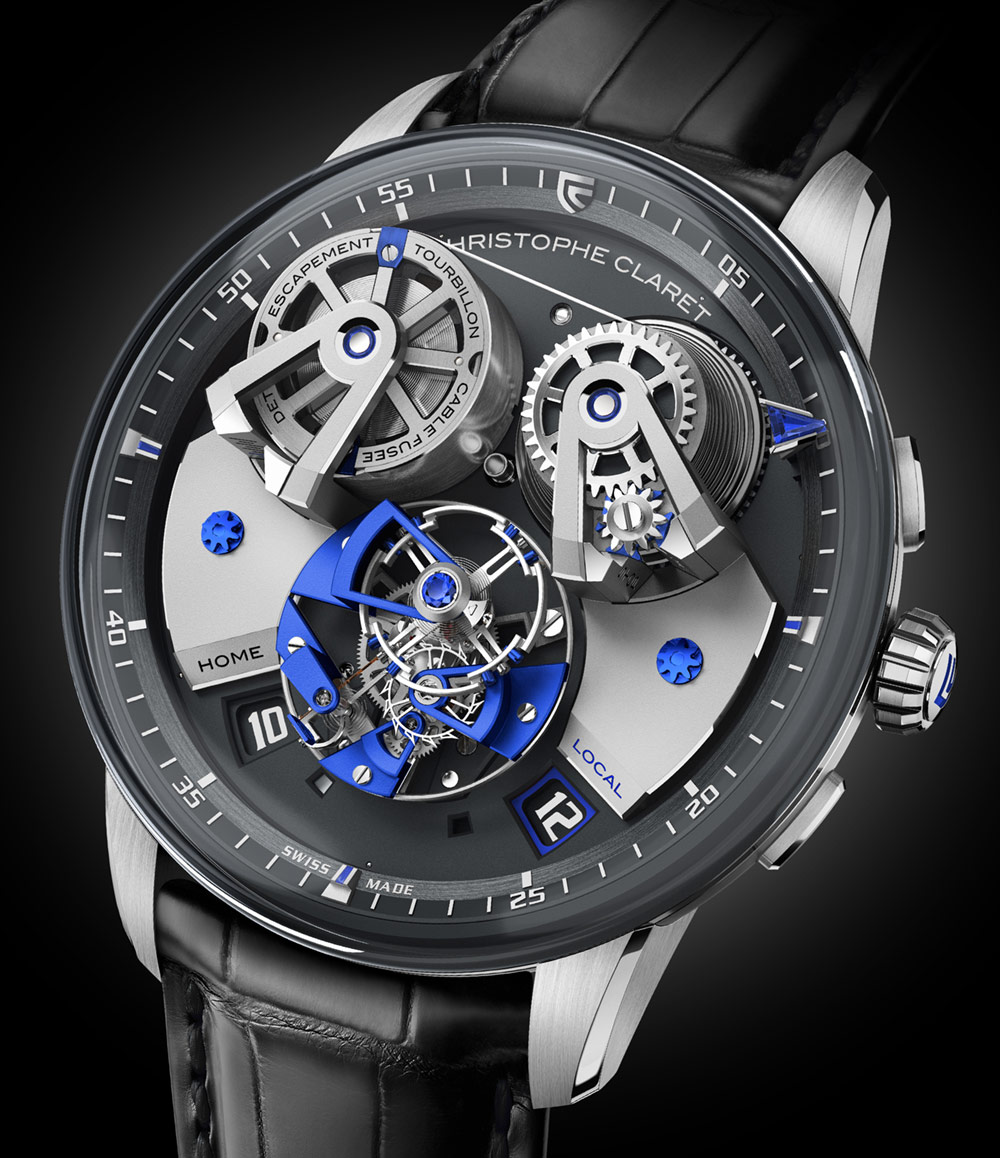 In 2019, independent watchmaker Christophe Claret celebrates two milestones: the 30th anniversary of his manufacture and the 10th anniversary of his eponymous brand. It’s been a wild horological ride, and to commemorate the occasion, he has unveiled a highly complicated watch with some interesting innovations called the Christophe Claret Angelico. Don’t let the conventional round case throw you off – this is a dual-time time watch with some characteristically Claret twists. 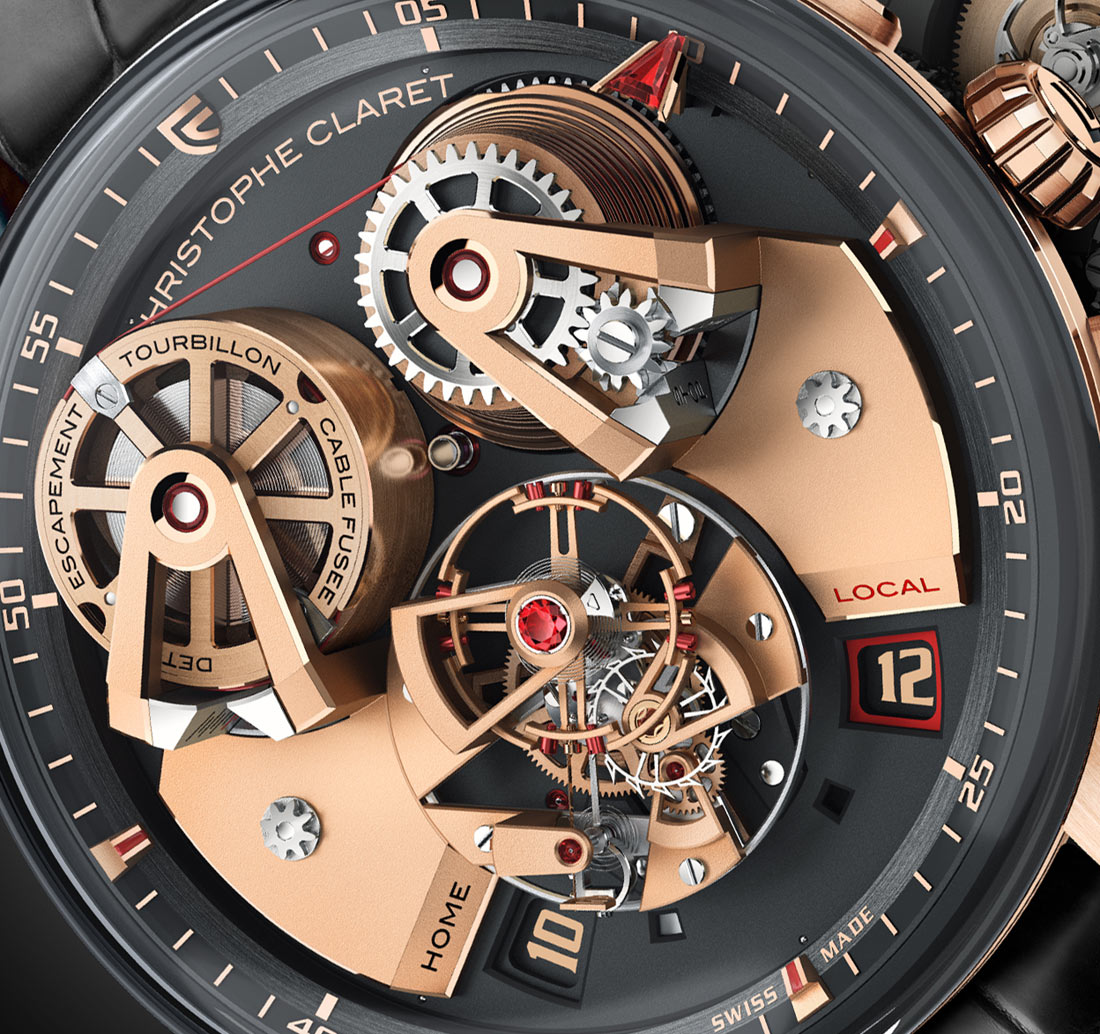 But first, a little recap about why Christophe Claret is so important in horology. For me, his seminal piece is, without a doubt, the X-TREM-1 watch from 2012. It’s a mega watch, and for those of you who don’t remember, it’s a watch that defies all the rules of watchmaking by incorporating magnets in the movement to tell time. That’s the motorsport equivalent of using water as fuel. More importantly, it clearly demonstrates Mr. Claret’s ingenuity and supreme skills as a movement designer and watchmaker. 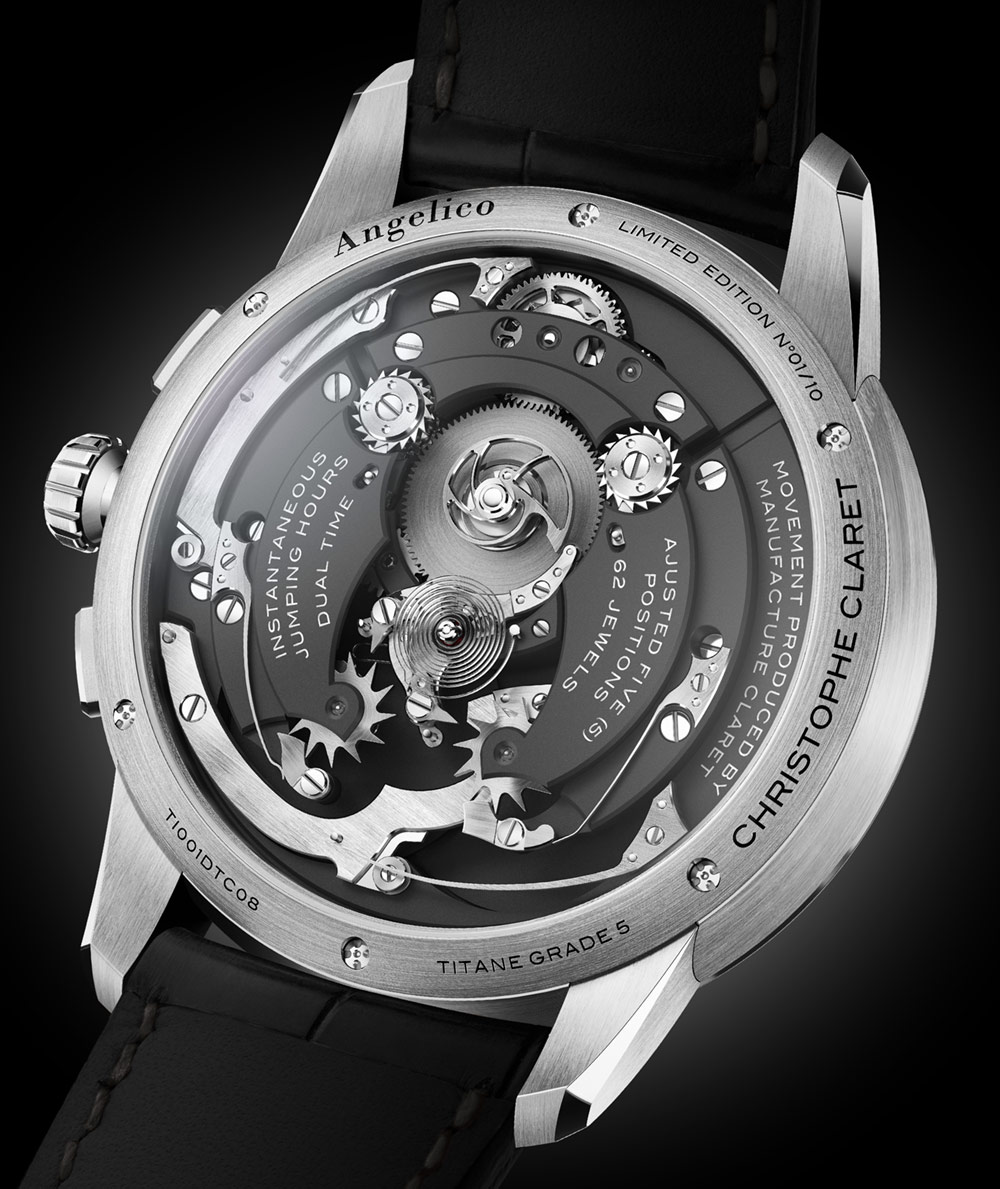 The new-for-2019 Christophe Claret Angelico is an obvious extension of that inventiveness. There will be two versions, one in 5N red gold and another in titanium. The Angelico is a large watch, measuring 45.5mm in diameter and a whopping 17.45mm in height (water-resistant to 30m). This has got to do with the movement and its complicated construction – which I will get into later. 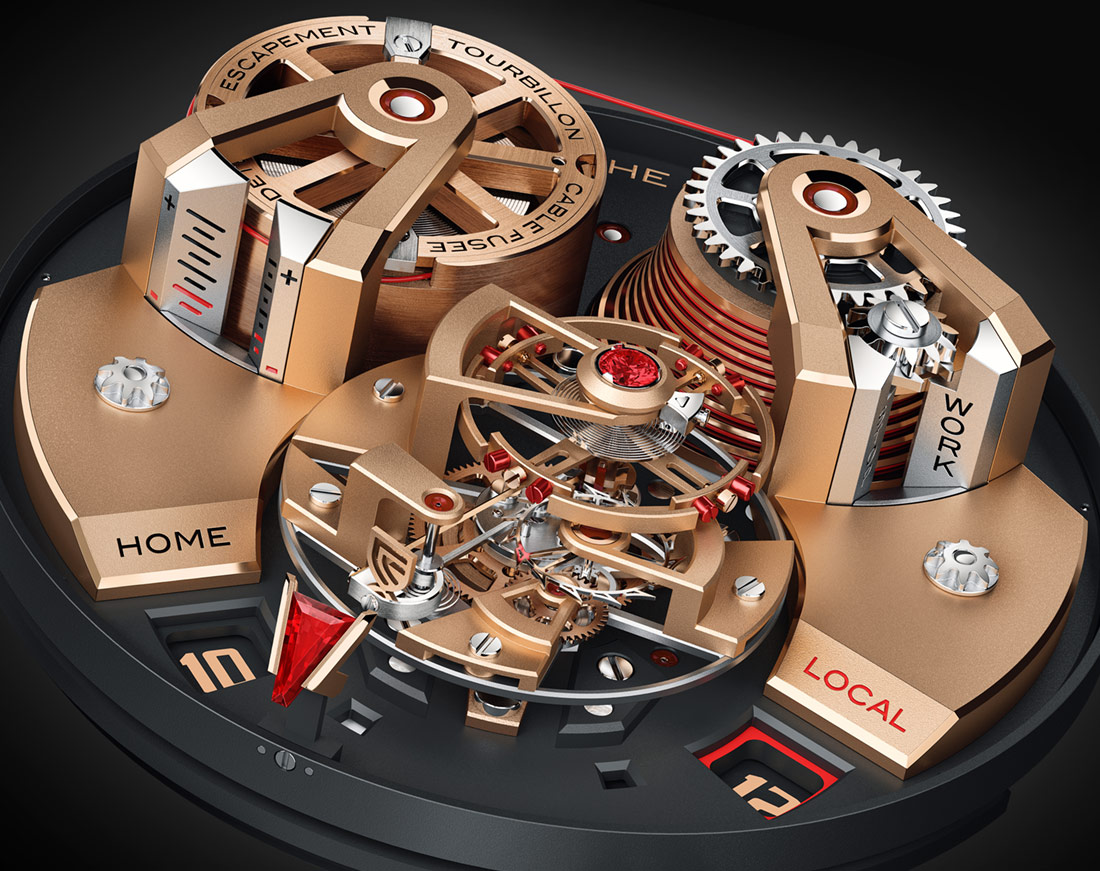 It’s hard to discuss the dial without talking about the movement at the same time because the highlights of the movement have been specially designed to take center stage on the dial. At the top, the dial is dominated by the chain and fusee constant-force mechanism. But if you look closely, this isn’t an ordinary chain and fusee system. In place of the traditional chain, the Christophe Claret Angelico uses an ultra-thin Dyneema nanofiber cable. This special cable has two advantages over a traditional chain. One, it produces less friction, which translates to less energy loss and a long power reserve. Two, it is thinner and can, therefore, wrap around the fusee more times, thus increasing its ability to more precisely regulate the power reserve. 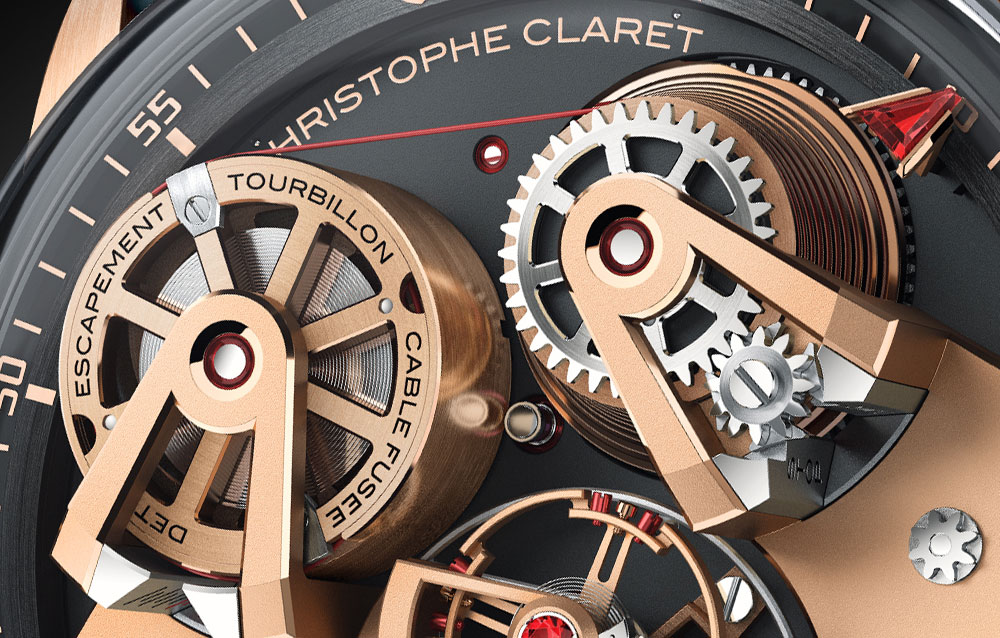 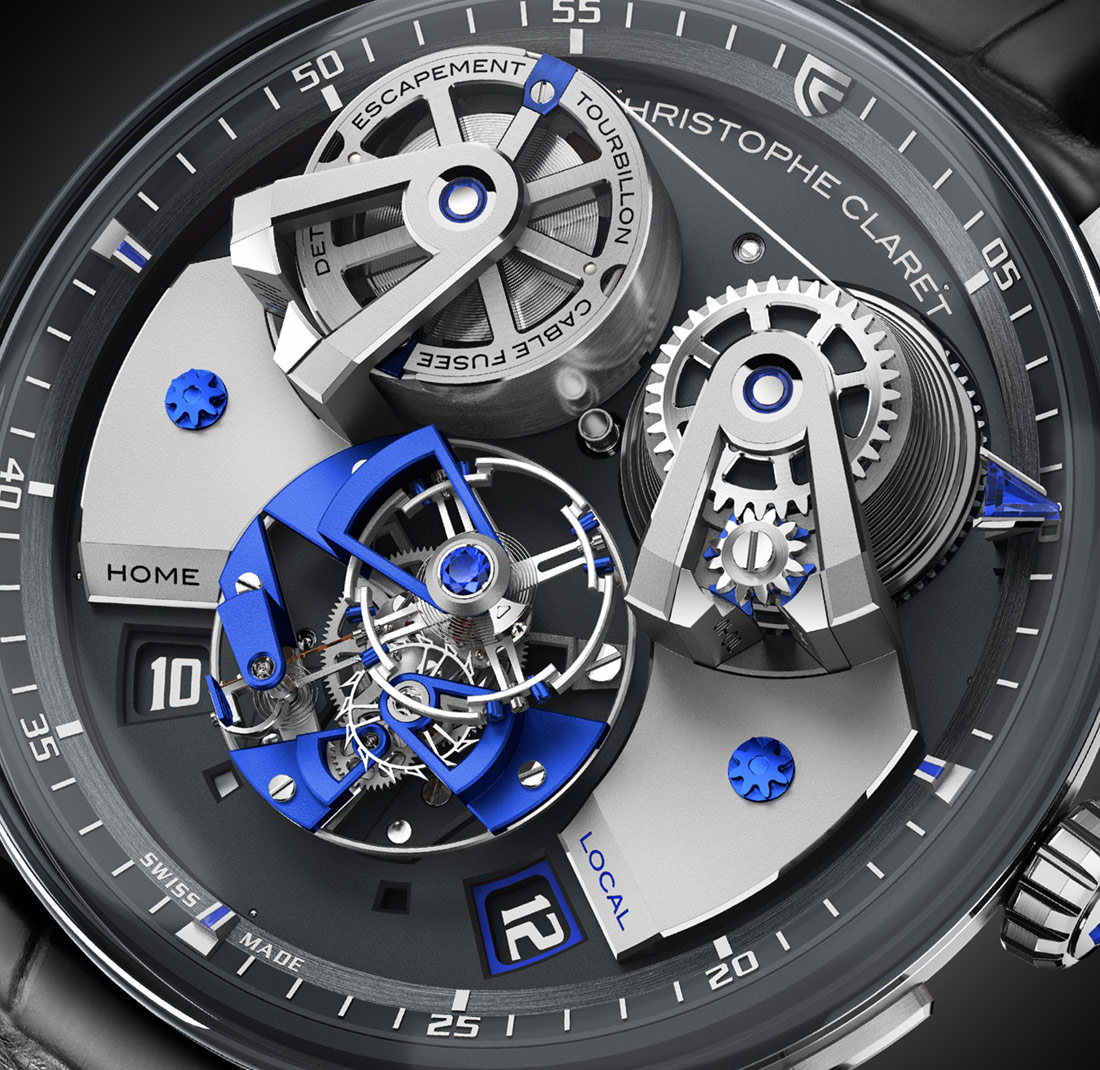 At six o’clock, you have a large tourbillon that measures 16mm across. With a carriage made out of titanium and the bridge in aluminum, it completes a rotation every six minutes. But what’s really unique about the tourbillon is that it uses a detent escapement, which is very, very rare to see. While the detent escapement is generally considered to be more accurate than the lever escapement, they are prone to shock damage, so great care must be taken to shield them from bumps and knocks. This explains why they were only used in the past in marine chronometers and hardly ever in pocket or wristwatches. In the Christophe Claret Angelico, the detent escapement has an anti-pivot cam that prevents the escapement from turning over. This is the same system used in the earlier Christophe Claret Maestoso Watch With Detent Escapement from 2014. 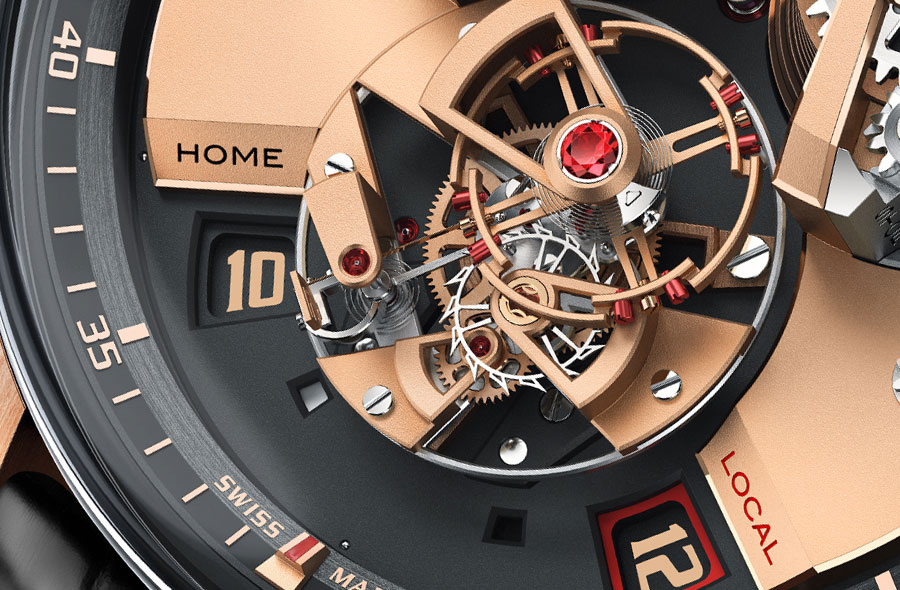 The time is read by the two jumping hour displays at 5 and 7 o’clock. The former shows “Home” time while the latter shows the “Local” time. Next to the displays are discrete day/night indicators. As for the minutes, they are displayed using a peripheral pointer. In the images here that you see here, the minute pointer points to 10 minutes. As you can also see, there are highlight differences between the titanium and rose gold models: the titanium model features blue accents, titanium components on the dial, and uses a blue sapphire stone for the minute pointer; whereas the rose gold model has red accents, rose gold components on the dial, and uses a red ruby for its minute pointer. 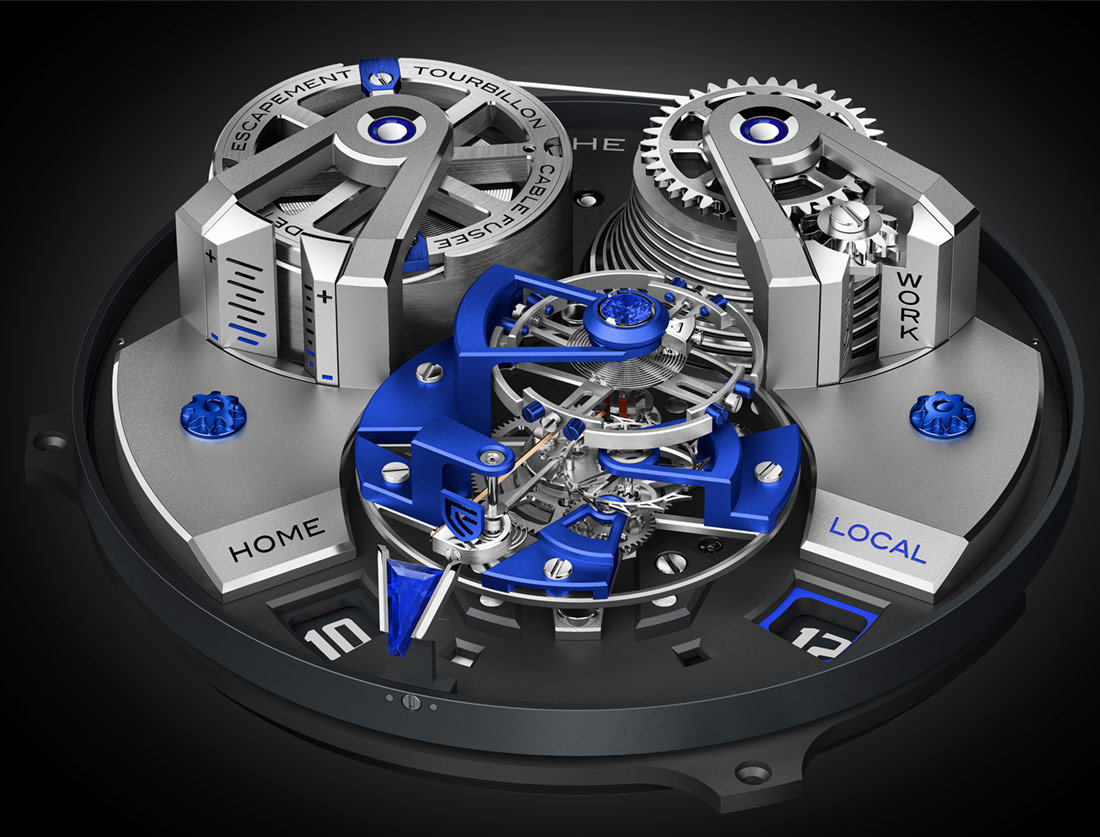 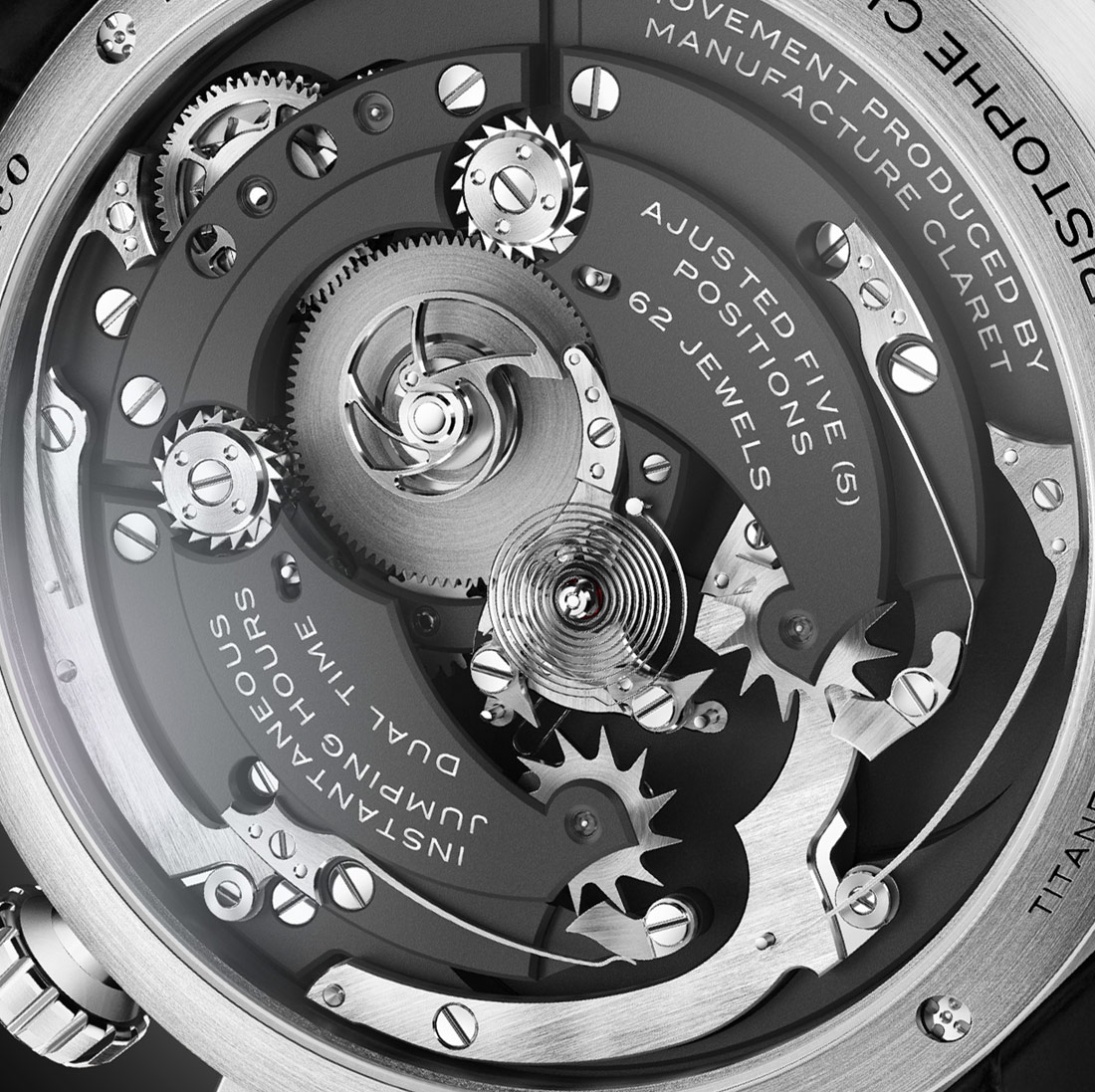 The movement within has been christened the caliber DTC08. It is a hand-wound movement that beats at 2.5Hz and has a power reserve of at least 72 hours. One can clearly see the mainspring from the dial side, but there is also a vertical power reserve indicator integrated into the side of the barrel. “Stop” and “Work” on the fusee bridge indicate the end of the barrel winding. Turning the Christophe Claret Angelico over, the movement’s complex jumping hour mechanism can be observed through the sapphire display case back. This highly complicated movement contains just 30 shy of 500 parts. 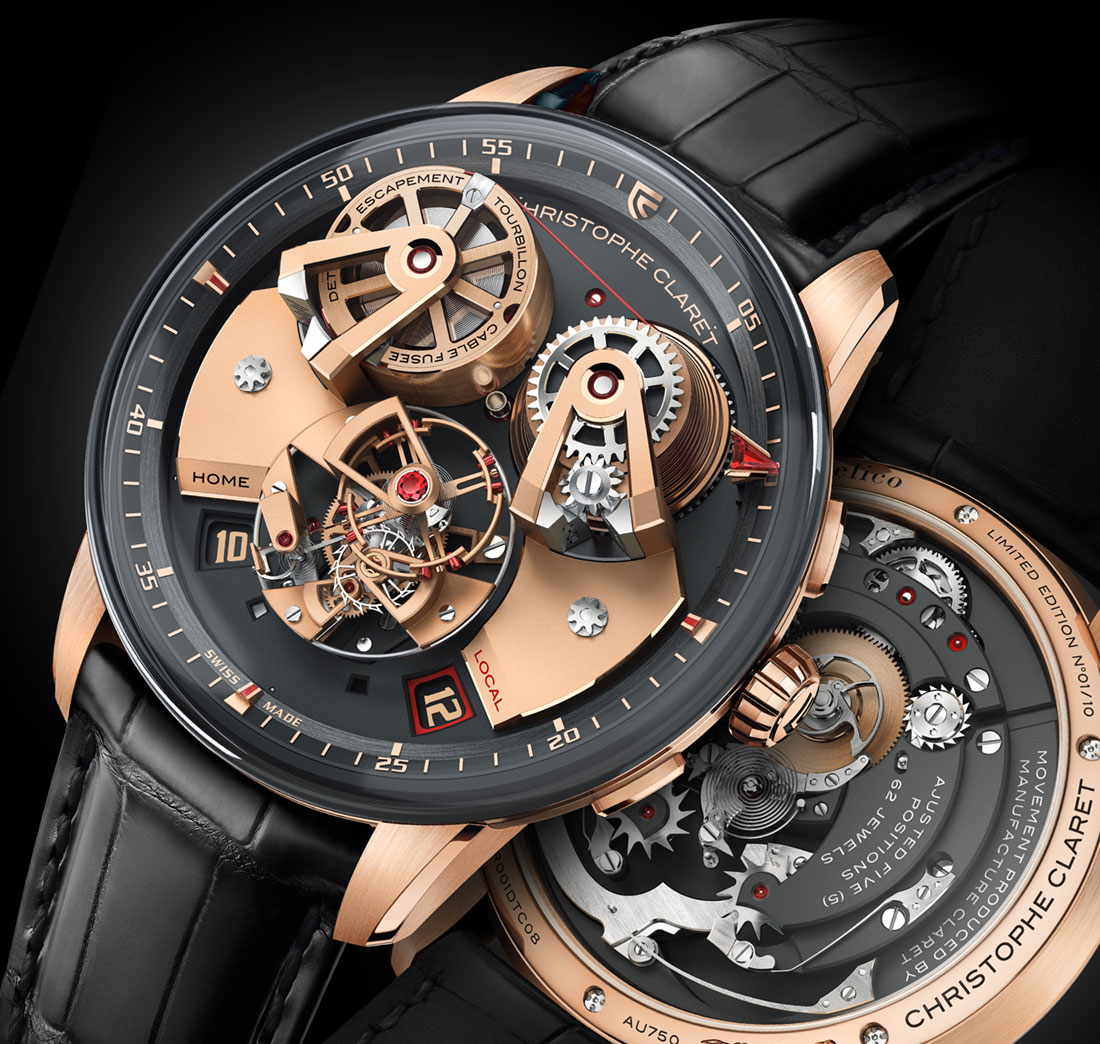 Though the aesthetics of this watch leave me feeling indifferent, its technical achievements cannot be understated. All things considered, the Angelico is a fitting tribute to Christophe Claret’s twin anniversaries as a manufacture and as a watch brand. As you might have guessed, the Angelico is very pricey and will be produced in very small numbers. The Christophe Claret Angelico is priced at 238,000 Swiss francs in red gold and 218,000 Swiss francs in titanium. Only 10 pieces in each metal will be produced. Learn more at christopheclaret.com