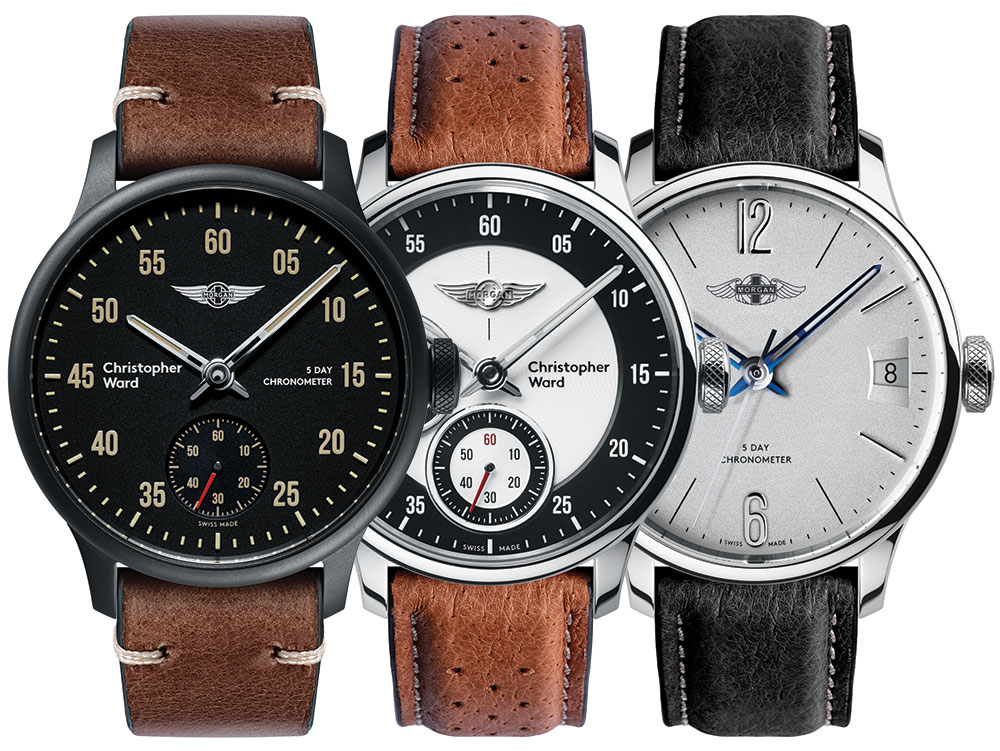 The watch world is full of collaborations between watch brands and car manufacturers, sometimes to an eye-rolling degree. I have to say, however, that the partnership of Christoper Ward and Morgan Motor Company seems apt and actually quaint. That is mostly because the two companies are English, but also because they share similar philosophies and approaches to doing business – a stubborn focus on classic designs, a genuine pursuit of innovation, and the guts to shake things up a little. If you know each company, you will know that I’m not exaggerating. As a result of this partnership (announced here), Christoper Ward and the Morgan Motor Company now present us with the new C1 Morgan Chronometer watch collection. Our regular readers are no doubt familiar with Christoper Ward by now. They are a brand based in England that has made significant progress in the past couple of years. In 2014, the company merged with Swiss-based Synergies Horlogères and announced their first in-house movement called the Calibre SH21. Up until then, Christoper Ward had mostly been regarded as a boutique brand, but the merger and the announcement of their own movement meant that they must now be regarded as a serious player in the world of watchmaking. Morgan Motor Company, on the other hand, is most famous for its classic-looking cars. The company was established sometime around 1910, and its most famous car is arguably the 3 Wheeler which, as its name suggests, is an open-top car with two front wheels and a single rear wheel. It was Morgan’s first ever car, and the company still makes 3 Wheelers to this day. Each of these new the Christopher Ward C1 Morgan Chronometer watches uses a 40.5mm-wide C1 Grand Malvern case (water-resistant to 30m), and they are powered by versions of Christopher Ward’s in-house Calibre SH21 movement. They are hand-wound, offer 120 hours of power reserve, and have also been certified by COSC to run within official chronometer specifications. Each watch offers a view of the movement through a sapphire crystal display case back with different bridge designs and finishes for each. The second watch in the collection is the Christopher Ward C1 Morgan Classic Chronometer. It is a three-hander with a date complication that pays homage to Morgan’s Classic range. It comes in a stainless steel case and features a domed opaline dial with polished pencil-thin nickel indices. The hands are made of steel and have been given a multi-faceted polish and blued, meaning they will contrast brightly against the opaline dial for improved legibility. Here, the SH21 movement has also been given a unique bridge design inspired by the steering wheels found in the Morgan Classic. The watch will come with a smooth Piccari leather strap available in camel, brown, or black. The third and final watch in the collection is the Christopher Ward C1 Morgan Aero 8 Chronometer which is inspired by the Morgan Aero 8 – the company’s most advanced car. Its case is in steel, with the top-facing surfaces polished and the sides brushed. The dial is more intricate here, featuring a wide minute track in black and the center in white. At 9 o’clock is a large power reserve indicator with a black outer rim and a white center. And at 6 o’clock you have the running seconds sub-dial, again with a black outer track and a white center.

Like the other two watches, the SH21 movement features a unique skeletonized bridge with brightly polished chamfers. The Christopher Ward C1 Morgan Aero 8 Chronometer watch will come with a perforated Piccari leather strap in camel, brown, or black.